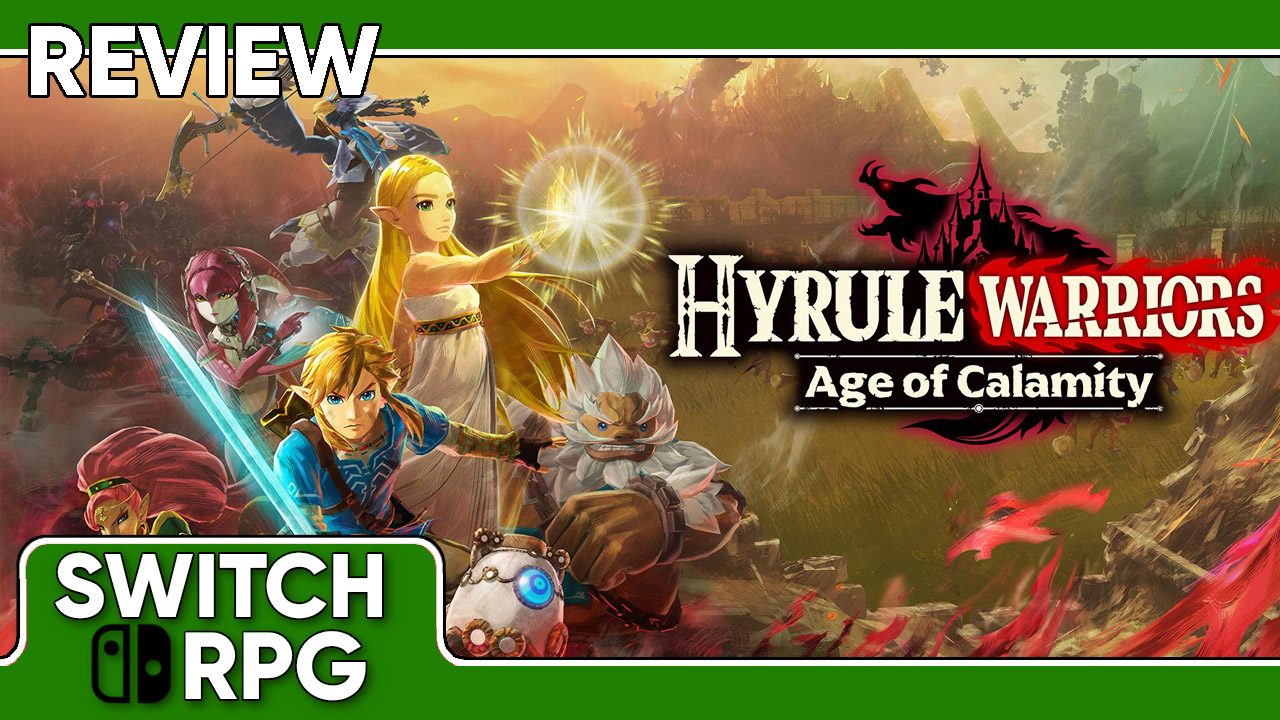 This past November, Hyrule Warriors: Age of Calamity was revealed to be releasing within three months. It’s very strange for a Zelda game to be revealed and released on such short notice, but 2020 was a strange year (to say the least) and this was a spinoff title (somewhat, maybe?) in the series. Hyrule Warriors: Age of Calamity is the follow up title to 2014’s Hyrule Warriors, which has been ported to Switch. While this is a Warriors (or Musou) styled game, it doesn’t take place in the same universe as its predecessor, instead taking place in the Breath of the Wild universe, 100 years prior to the 2017 hit title. 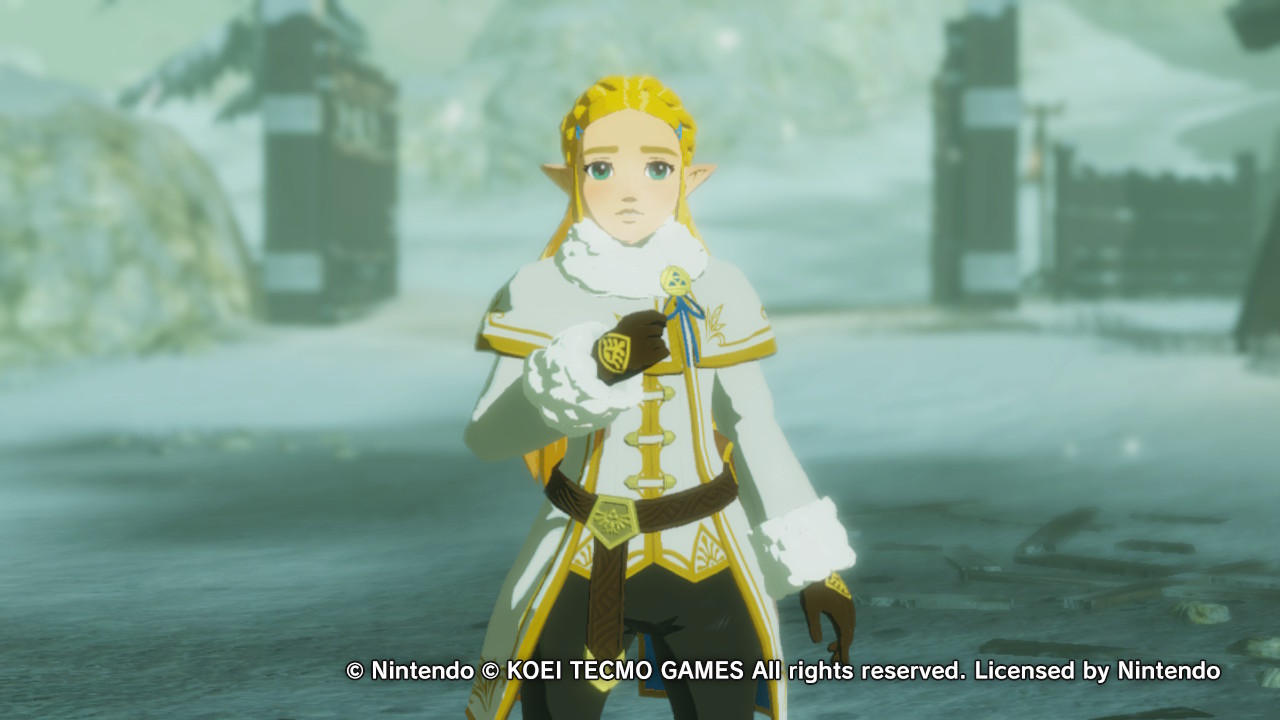 Despite Hyrule Warriors: Age of Calamity being very much about the past, it actually starts in the hectic future. In the opening cutscene, we are introduced to a baby guardian that awakes as Zelda embraces her powers, traveling back in time to warn our group of heroes about what is to come. This adorable baby guardian, Terrako, travels back to when our group of heroes feel that all is lost. In Breath of the Wild, Calamity Ganon has returned but is trapped in the confines of Hyrule castle, but in this game that isn’t entirely the case. 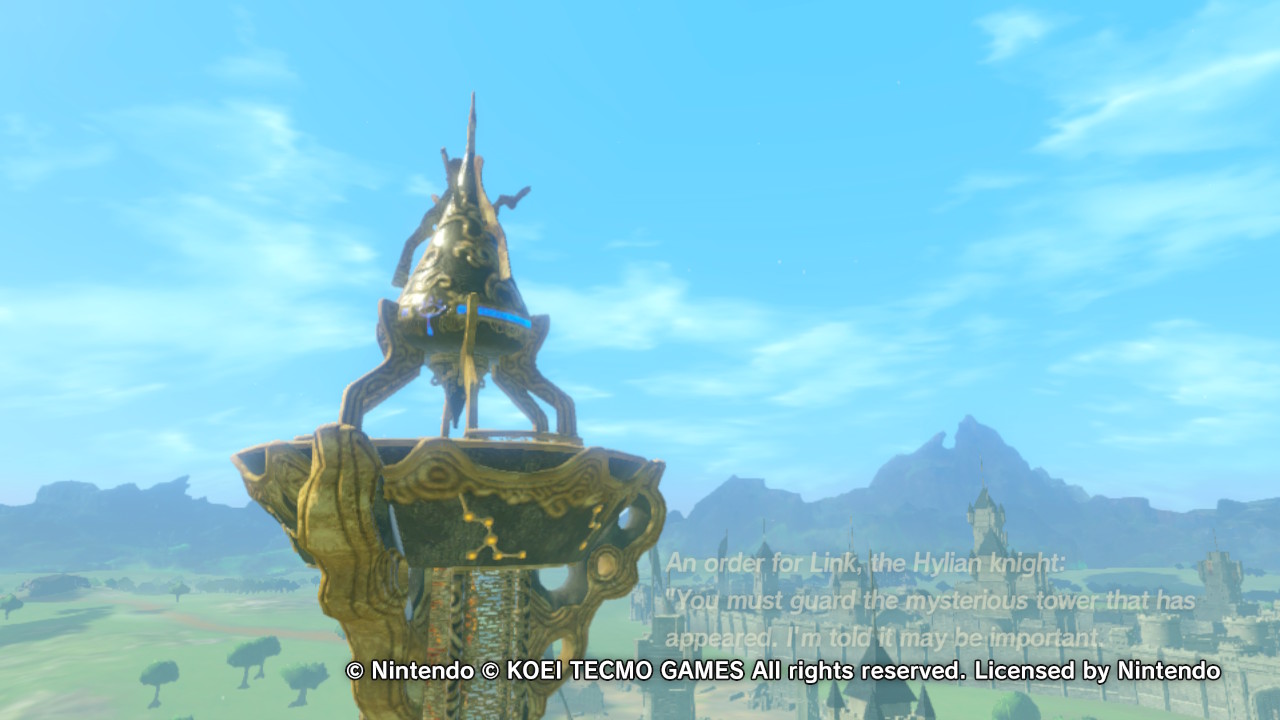 In the past, Link discovers the mini guardian during a battle in Hyrule field where King Rhoam has dispatched the Hyrulean Army, including Link, to fend off the army of Bokoblins, Moblins, and Lizalfos headed to the castle. During the battle, Terrako is found in a dysfunctional state, but a young Impa is able to activate the baby Guardian with a Sheikah slate which subsequently triggers a tower to rise up from the ground. While I won’t spoil any further details, it is safe to say that this game features one of the most well-constructed stories of any Zelda game, let alone those of the Musou variety.

Hyrule Warriors: Age of Calamity features what you’d expect from a (Musou) game: lots of hacking and slashing your way through thousands of mindless (for the most part – don’t forget the Lynels) enemies. As you traverse each level that consists of a large map, walloping groups of enemies along the way, you will occasionally run into stronger foes that typically can’t be bested through button-mashing alone.

This is where an understanding of how each character functions will become handy. Fans of Breath of the Wild will find some familiar aspects of combat, as runes return and are pivotal to this battle system. While its obvious Musou core may not be for everyone, Age of Calamity more than makes up for it with its impressive roster of playable characters, some of which are nice surprises (no spoilers here). 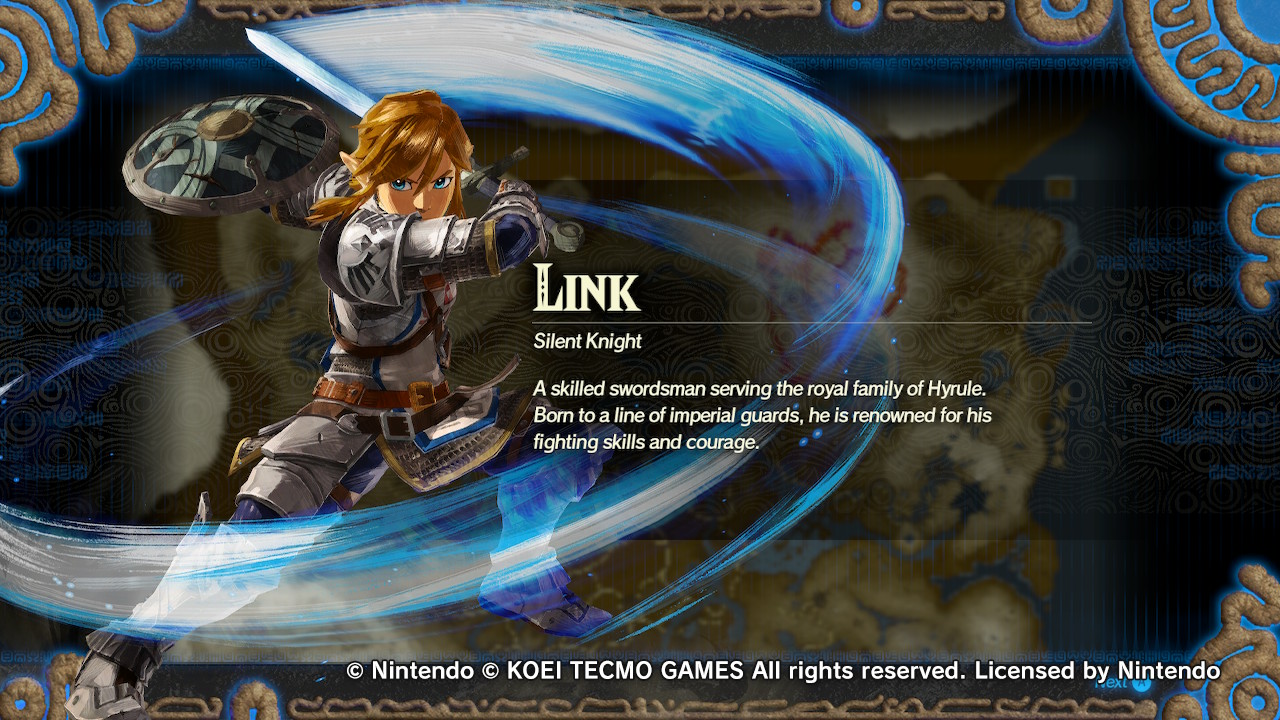 Each character plays differently and has their own unique take on the use of runes. For example, Link is well balanced, has his sword to build up combos, can pull out his bow to quickly fire off some arrows, or can use the runes (such as bombs) to blast away hordes of enemies just out of melee range. Playing as princess Zelda is very different from Link, as her combat is done entirely by using the Sheikah slate to fend off enemies.

Another highlight is being able to play and learn about each of the pilots of the divine beasts. For me, being able to do the missions where they pilot the giant beasts and just unload on hordes of enemies with turret-based combat is fun. The controls for the beasts can be cumbersome at times, but once you get the hang of it, the missions are fun to play and a nice break from the more traditional Musou missions. 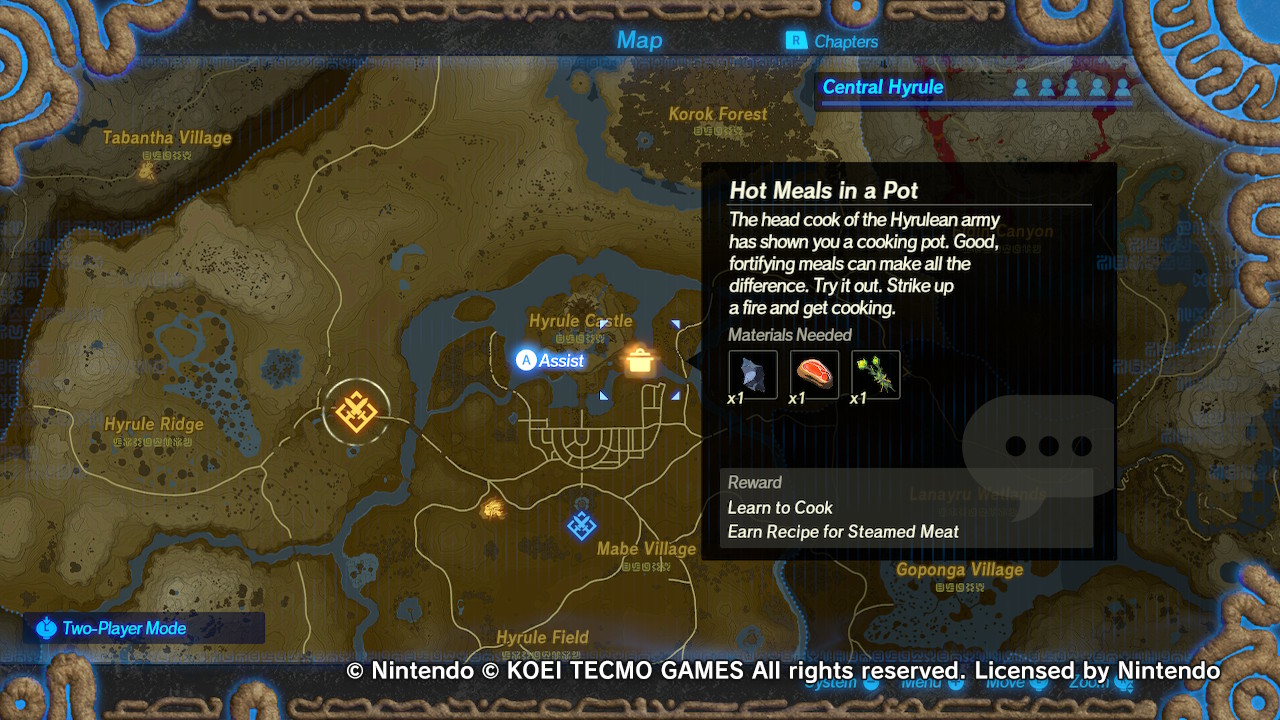 When you are not on a mission, players are greeted with a familiar view – the map of Hyrule from Breath of the Wild that’s initially filled with lots of icons, most of which are side quests. In addition to story missions and side quests, players will find various things to do from visiting shops to purchase materials for crafting food or for other quests, to blacksmiths and barracks that allow the player to upgrade and train characters for character-specific missions. 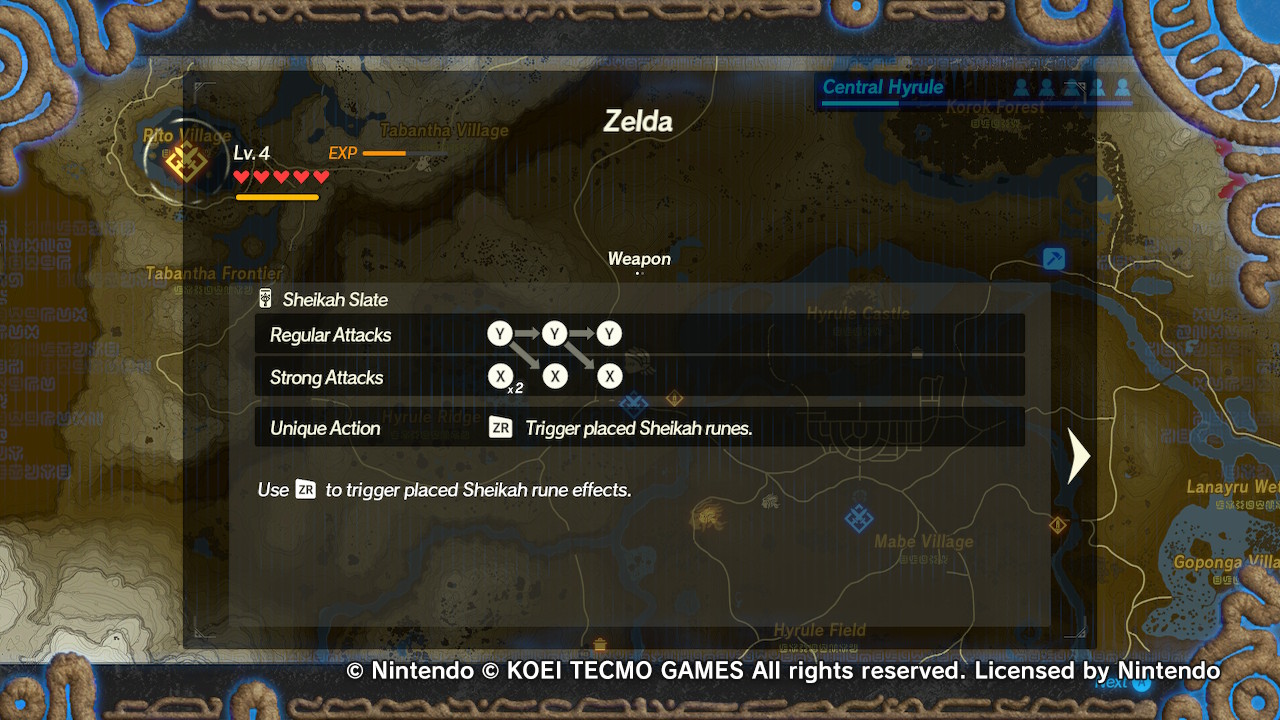 The map also allows you to see the various types of enemies found in a mission and the various types of materials that can be found in each. There is also an upgrade you can get later, Sheikah Sensor, which allows you to track materials you need for certain objectives. One great thing about Age of Calamity is that weapons don’t break and actually have a nice progression system tied to them.

As you play with certain characters, more weapons for them will be dropped and collected upon completing missions. You can either choose to equip them or use them to upgrade other weapons you prefer. You can pay to upgrade your characters, even ones you don’t frequently play as, to keep their levels inline with the rest of your party. 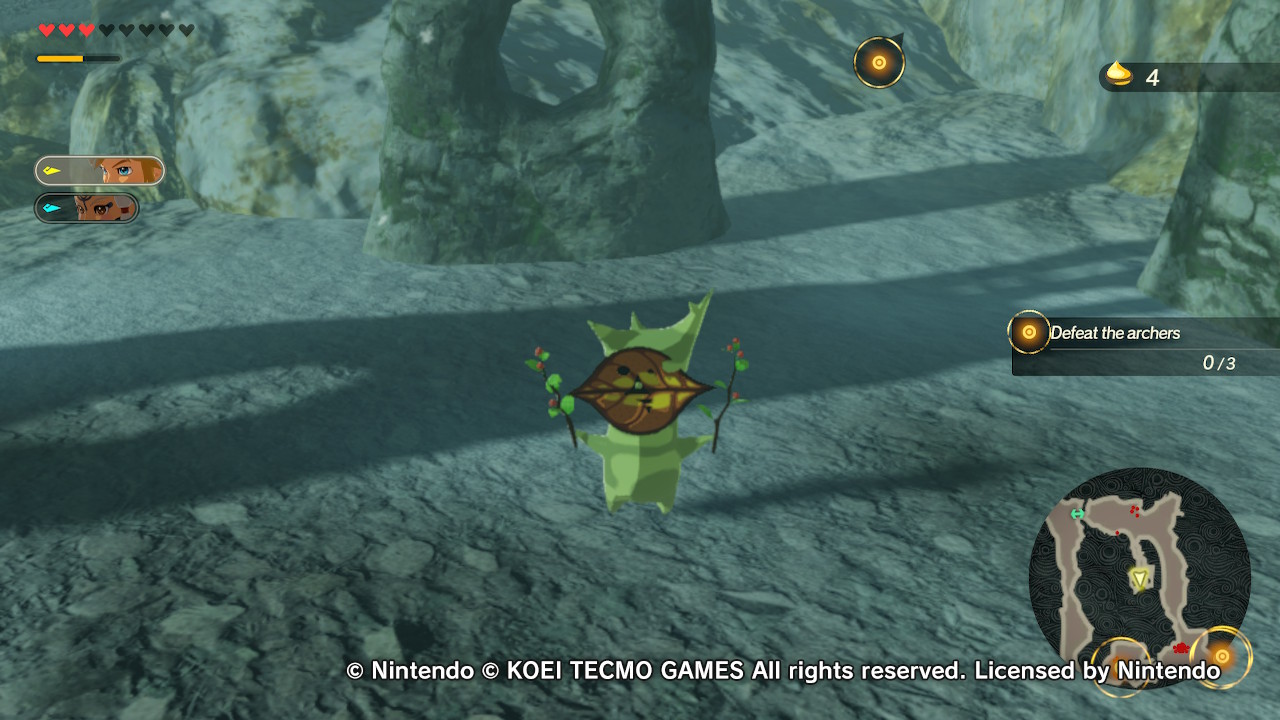 Selecting a quest to embark on from the Breath of the Wild overworld map allows you see various aspects about the mission, such as rewards, recommended level, and which characters are required for it. While some missions require you to use certain characters – Link is required a lot early on – others give you the option of selecting your own characters.

Completing the game’s main campaign isn’t all the game has to offer. Once the tale ends, there is still plenty of post game content to tackle if you so wish. This includes collecting Korok seeds which are only a measly 134 here versus Breath of the Wild’s 900. You will also be able to wrap up additional side quests that are available, some of which only unlock after beating the campaign. Additionally, there are some unlockable characters that can be added to the roster. 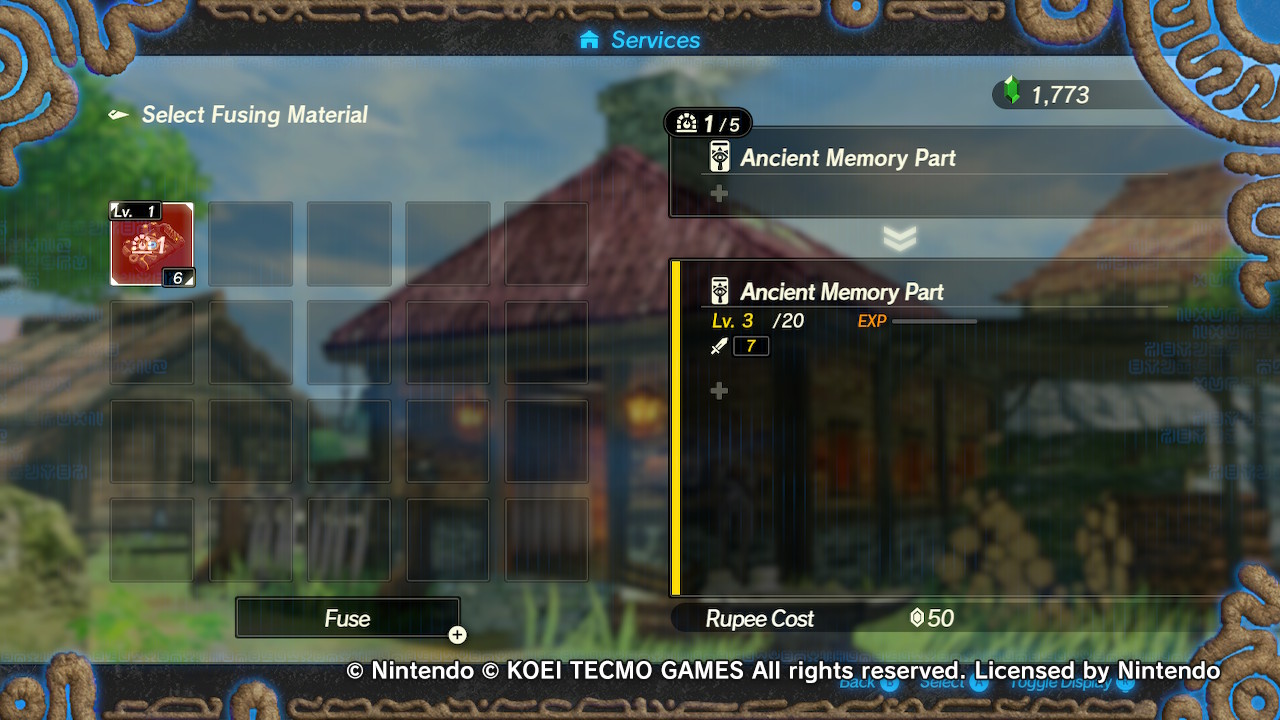 When it comes to presentation and performance, Hyrule Warriors: Age of Calamity is a mixed bag. They really nailed the presentation part – the game looks beautiful as the team has expertly blended the Breath of the Wild look with the Musou visual essence. Unfortunately, things fall apparent while in missions, as the framerate can really chug at times.

While I commend the developers for setting out to depict the events and strife of the Great Calamity in massive battles, the scale is exactly why the framerate is all over the place. Sometimes, the game just stutters and freezes for a few seconds and it immediately ruins the immersion factor and overall gameplay experience. Hopefully, the developers can patch it over time and make the game a bit more stable, but I am skeptical as 2019’s Link’s Awakening still has issues that have yet to be resolved. 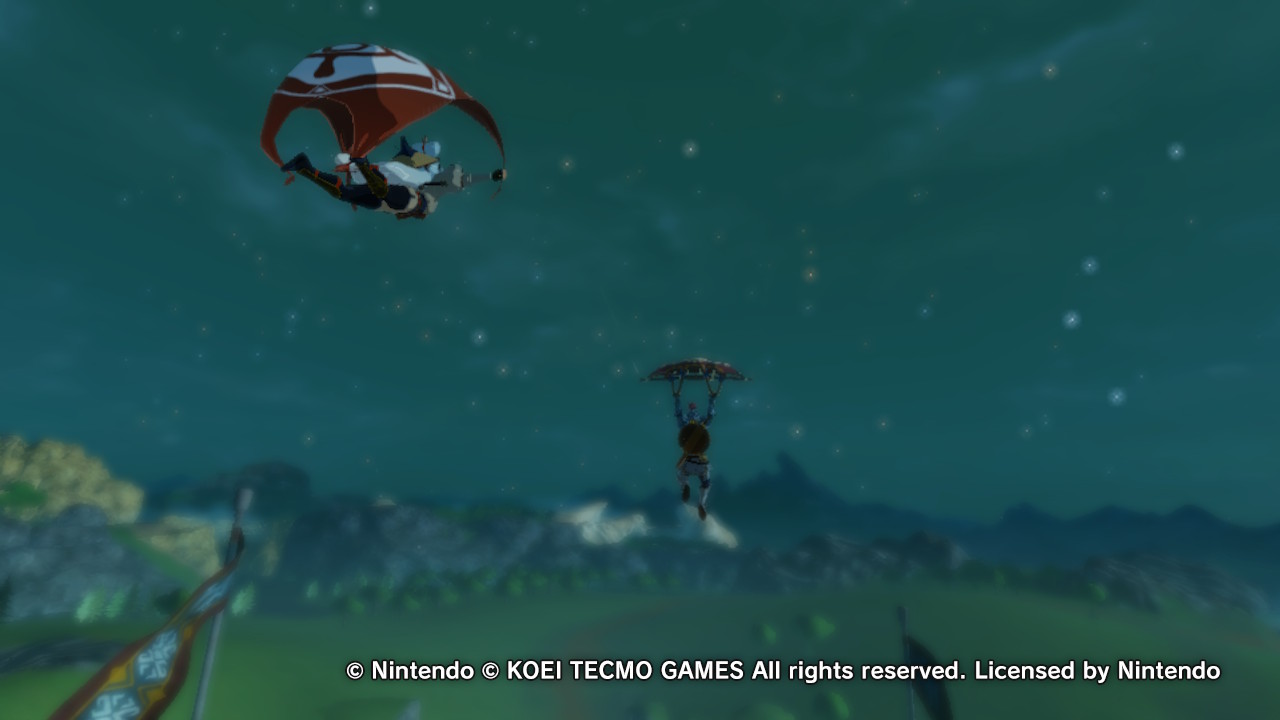 Hyrule Warriors: Age of Calamity really surprised me. I went most of 2020 not expecting a new Zelda entry, and definitely did not expect to enjoy another Musou-style game after being disappointed by the original Zelda entry. While a Musou game at heart, the incorporation of Breath of the Wild aesthetics and systems made it an enjoyable experience, one which had me sinking more than 25 hours in before rolling the credits. I still have plenty of side missions to do, some of which are required to complete the post-game content and unlock another character.

What grabbed me the most was learning about the champions and being able to control the divine beasts – those missions were easily some of the best in the game. It can be frustrating for those accustomed to mashing buttons to win, as later on you will need to know how the characters control and combo to be successful.

Luckily, you can turn the difficulty down a bit and still fully experience the story – for me, the unexpected highlight of the game. Surprisingly, Hyrule Warriors: Age of Calamity feels like the first Zelda game that really tells its story well, one that all Zelda fans should experience. Being able to live the events leading up to the Great Calamity in Breath of the Wild was a real treat.

Tags: Age of CalamityBreath of the WildThe Legend of ZeldaZelda