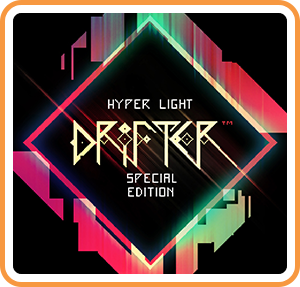 If you can recall the era known as “The Kickstarter Wars,” chances are you’ve likely heard of Hyper Light Drifter. Lead designer Alex Preston hoped for the game to blend elements of The Legend of Zelda: A Link to the Past and Diablo together while expanding exploration and enhancing scale. Not bound to the grid-like structure of the former, but allowing for customization on-the-fly in combat like the latter, the result is an Action Role-playing game that is equal parts tense and melancholy, serene, and desolate. While the title does feature some refined combat and a vast amount of exploration, does the end result stand shoulder to shoulder with the aforementioned series, or skip a heartbeat or two?

At its core, Hyper Light Drifter is about survival. There is plenty to do and see in the four corners of its vividly-detailed world: hitting switches, collecting shards of big, old squares, and hearing the tales of its non-playable characters, who speak in picture frames rather than words. But all of these are distractions in comparison to the more active and demanding combat segments peppering the landscape. The Drifter is capable of dashing, slashing with his signature sword, and firing an assortment of weapons via inputs mapped across the controller. While the inputs aren’t all centralized in one place, the controls feel comfortable and natural enough that they will become intuitive. This is fortunate, as the hordes of enemies found throughout the world of Hyper Light Drifter are more than willing to take a bite. The game’s auto-save feature is a blessing, saving the amount of health packs and ammo the player has as they enter each new room of the map, crucial because enemies can, and often will, overwhelm and push the player back to the start. While some of these are simply waves of enemies, others use a mixture of environmental hazards and interactive elements to impede the player, hoping to chip away at their health reserves as they venture towards each of the four major boss encounters. Though these rooms can serve as an interconnected gauntlet, some are difficult enough to take multiple tries.

Although the opening moments of the game can prove somewhat frustrating- seeing as enemies are swift and limber, bouncing around the stage while the Drifter can only slowly plod and slash- cash reserves, as well as a steadily growing arsenal of ranged weapons, help keep the rhythm and difficulty curve in check. Although the screen can fill up with enemies, its always best to keep cautious and pick and choose one’s moments of opportunity. The gameplay supports this, as ranged weapons have limited ammunition and must be recharged via either destroying environmental objects or dealing melee damage to enemies. As some enemies are much easier to deal with at certain ranges, combat turns into a dance of weaving in and out of enemy formations, both on a micro and macro scale. Whether inching one’s way outside of a melee attack or dashing away from a lunge, Hyper Light Drifter offers up plenty of variety despite a relatively low number of enemy types.

Fortunately, though combat is the central focus, it doesn’t leave the player without anything else to do. Throughout the environments, players can find golden currency as well as triangular fragments and key cards, items that serve as keys for each respective region, locking out some of their greatest benefits for later and other secrets for a smooth sense of progression. However, currency, fragments, and other goodies are often hidden away behind secret walls, a staple of the Zelda series that sees usage here with mixed results. On one hand, players are trained to keep their eyes open for a very specific floor indentation, which often signals a hidden passageway. Often, but not always. There are also camera tricks that the game uses to highlight areas of interest, but these can often be obscured behind its gorgeous visuals. Getting 100% completion is truly a test of patience, and seeking out all of the hidden trinkets is the primary method Hyper Light Drifter uses to bolster its playtime.

If Hyper Light Drifter uses gameplay to drive themes of harsh survival and perseverance, its aesthetics counterbalance this with their rich color palette, vivid detail, and stylistic tendencies. Despite its post-apocalyptic setting, the game balances natural peacefulness and the consuming power of nature in order to communicate its simplistic narrative. Each of its four main environments have vastly different features, from appearance to layout, that differentiate them drastically from one another. All of this is paired with a stunning synth OST from Disasterpeace, giving the whole game a surreal, soothing feeling. Sometimes, it is easy to become lost not because of the complexity of the environments, but rather the overwhelming visual and auditory stimulation, something that can be somewhat daunting when swamped by enemies or encountering one of the more serious boss enemies. Hyper Light Drifter is a feast for the eyes and ears, and its atmosphere is worth the price of entry alone. 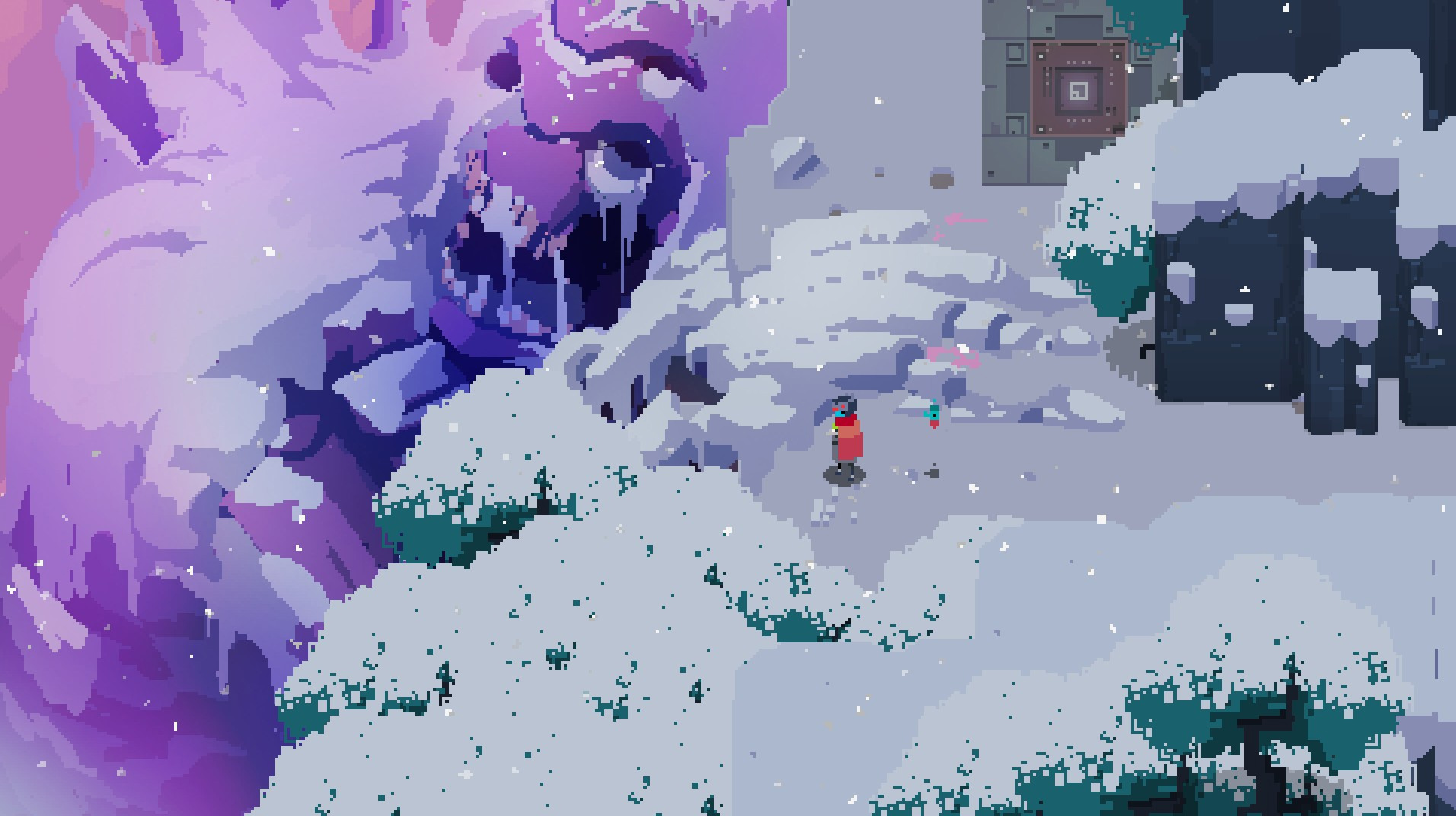 However, these complex aesthetics have a dual effect. The previously-mentioned hidden wall cues can be easily missed, and other interactive elements can be overlooked because of the sheer amount of things onscreen. Ledges that appear reachable are often anything but, and several instances within the game feature no visual hints or tells whatsoever, leaving the player no choice but to hug walls and dash off into the distance in the hopes that they will find something. Likewise, the labyrinthine, two-layered nature of the world allows for two different moods in each separate environment, but the map is segmented in two in accordance, resulting in a convoluted mess of pictures that only somewhat help the player get their bearings. It is unfortunate that a game based upon experimentation in exploration, in finding what doesn’t always appear to be there, gives little indication of how much a player has collected in regions, nor does it feature some sort of marker system to help players keep track of areas they’ll need to double-back upon. While this Special Edition of Hyper Light Drifter does come with an additional outfit that will point out some hidden items for the player, it gets picked up rather far into the game, at a point where even a brave player’s patience may have run thin.

Other features and impressions

Aside from new outfits, this Special Edition also features a few new challenges, tricks, and weapons. Although if one were unaware of their addition, they may think these elements are merely a part of the base package. However, two instances in particular, involving the Crystal Shot and Blade Caster, do seem to be high-difficulty challenges meant to be tackled by the experienced player, they don’t come across as supplemental material. In fact, if Hyper Light Drifter had a bit more optional content, such as its odd soccer mini-game, and these optional weapon challenges, it would feel a bit more like an adventure title and less of a contemplative exploration game.

For newcomers and veterans alike, Hyper Light Drifter doesn’t overstay its welcome. Much of what it has on display in this Special Edition represents the most the developers could get out of their player avatar’s move-set, though some of the enemy designs are still tame and predictable. In other words, there’s fewer robotic monstrosities that one might be led to believe, initially. 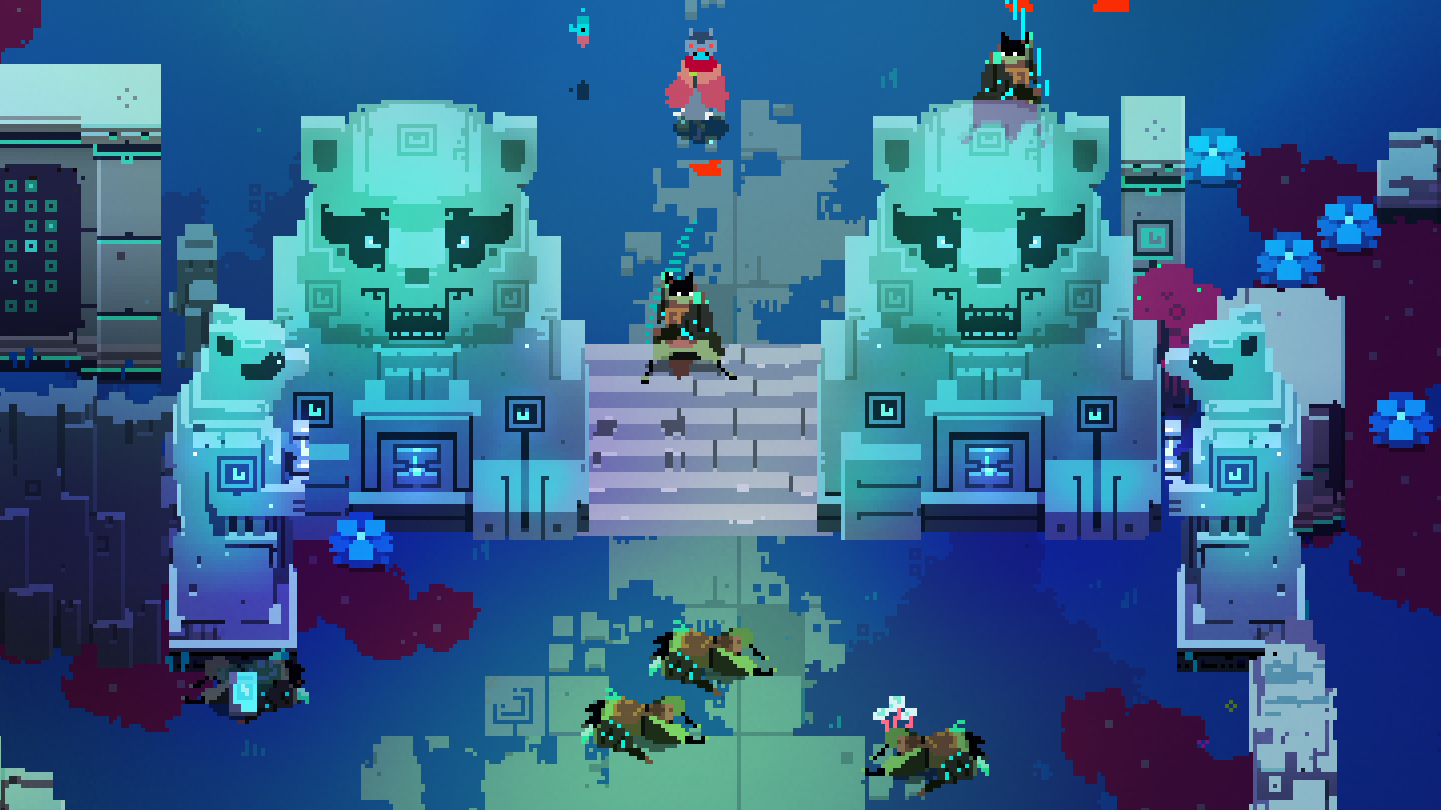 This doesn’t detract from the overall visual spectacle and quality of the combat; however, the obscure hidden objects and aimless directive do, somewhat. Hyper Light Drifter demands patience and a slower pace, so those looking for a non-stop, full throttle action title should temper their expectations. While the game seeks to deliver a more expanse experience than the SNES titles of the past, it is often most effective during its most intimate moments. In comparison to other Zelda-like titles on the Switch eShop, it is difficult to say whether or not there is an equal amount of quality and personality, as Hyper Light Drifter is content to wow players with its own, unique charms. If you are a fan of tight combat and gorgeous visuals, you can’t go wrong with this title, but expect to get lost more than a few times, in both good ways and bad.