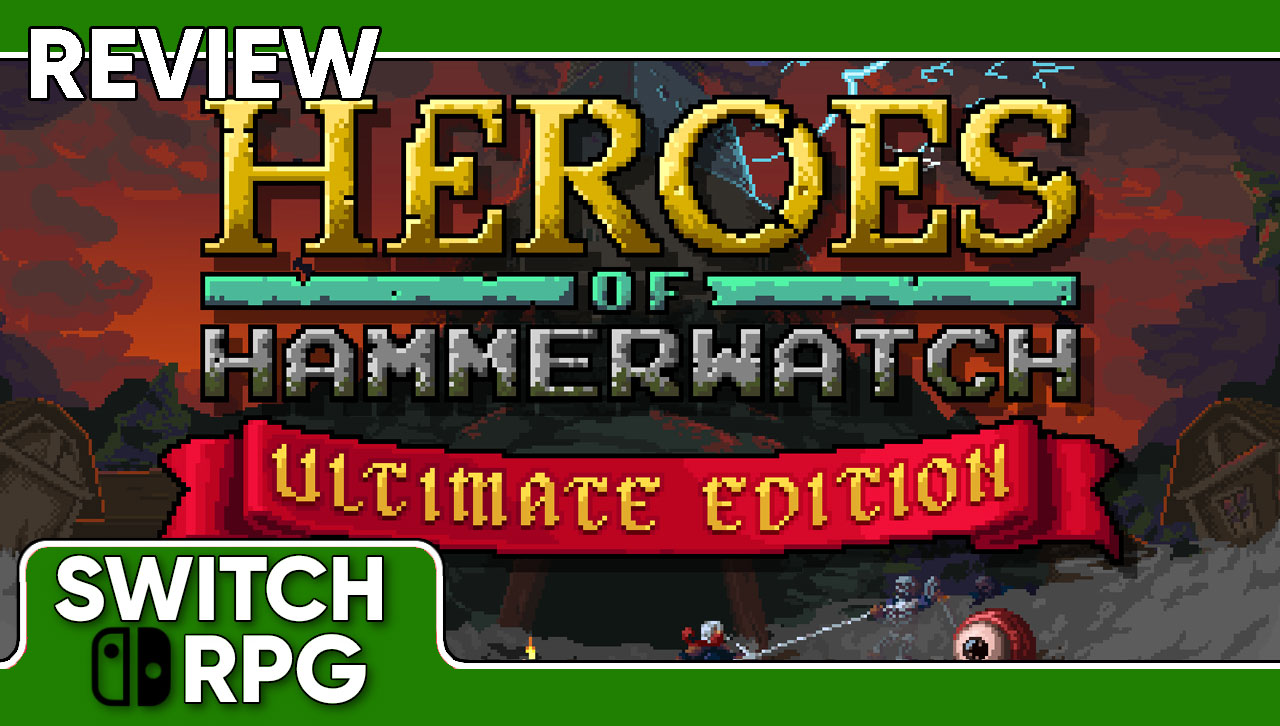 In the last two decades, Western video game markets have seen an explosion of titles in the roguelite subgenre. The strategy and tactical planning that is incorporated in playing a roguelike or roguelite is a completely different style of play than your typical adventure or RPG games. Heroes of Hammerwatch Ultimate Edition is no different- this action RPG roguelite is hard to put down, with the constant idea of just one more run and the satisfaction of mowing down endless hordes of enemies pushing you forward.

The original Hammerwatch is a fantasy-themed hack and slash action adventure possessing similarities to the game Gauntlet from 1985. Heroes of Hammerwatch, on the other hand, is a roguelite adventure game with procedurally-generated dungeons offering a high replay value. There is no tutorial or explanation at the beginning of the game, which can cause some disorientation and confusion until you have experimented enough to figure things out on your own. Even hovering over buttons does not tell you what they do, so you are forced to guess based on the picture presented or click it to see what it does. Additionally, you must experiment with pressing all the buttons on your controller to see which one does what, and even several levels into the game I was discovering new things that I should have known how to do from the start.

You begin your game by choosing from one of nine different classes: Paladin, Priest, Ranger, Sorcerer, Thief, Warlock, Wizard, Gladiator, and Witch Hunter. Each class utilizes different weapons and abilities and have varying strengths to make them useful, such as the Ranger working best for distance shots while the Gladiator excels at being up close for a hit and run.

The first dungeon you face is the Mine. You are told by a nearby NPC as you approach the entrance to the mine that the entrance will be sealed off once you are inside, to avoid having the monsters overrun the town. This means that once you enter the mine, there is no leaving. Each of the six dungeons has three levels, as well as a boss level to conquer before moving onto the next. The levels are filled with puzzles and traps, secret rooms, hidden buttons, hordes of enemies, and a lot of loot. Sometimes there will be an elevator shaft in a level which you can use once to send money and ore that you collected back to town, though once you have used the elevator to send your loot back, you cannot use it again. Sometimes you are also able to find items which will give you a bonus to aid you in your battles, such as increasing your health or armor, granting bonuses to gold you find, or increasing your run speed. Don’t get too attached, however- these items disappear after death. With each run your hero will retain experience gained and can level up. Using money collected and sent to town during your runs you can unlock new abilities and skills with each level gained. This means you become stronger and better able to withstand the onslaught with each run you take. 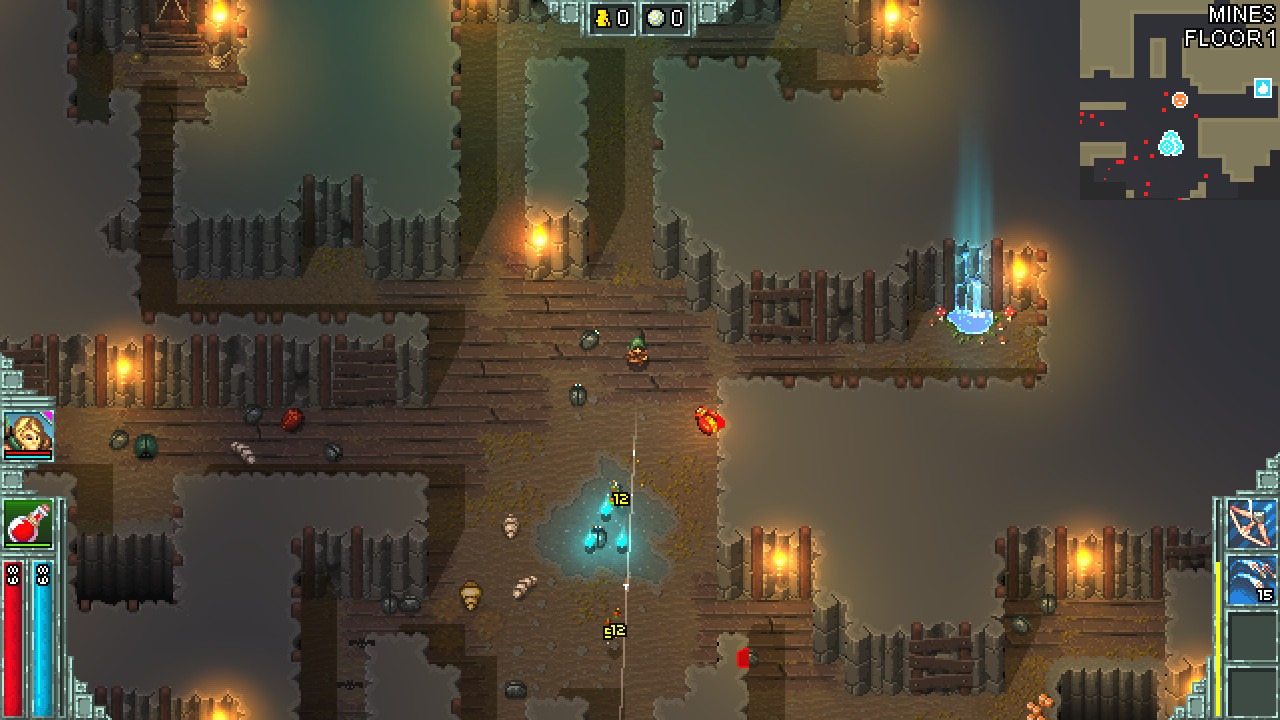 Each time you defeat a boss and complete a dungeon/act, you will move on to the next. However, there is a bit of a level-skipper system if you can find it. In the first level of every act, there is a rectangular portal that will spawn after you have defeated the boss of that respective dungeon at least once. The portal does not simply transport you to the next act, however, instead finding yourself in the Red Room, at the center of which is a red cube that you need to destroy to move on.

In town there are ten different buildings you can purchase upgrades for using ore collected during your runs. Upgrading these building allows you to get various enhancements: For example, with every upgrade of the Blacksmith you are able to purchase boosts for your armor and attack powers. In addition to these buildings, you can also spend money and ore to unlock other neat features, such as character customization options, blueprints to craft an item to take into a dungeon with you, or drinks to give you certain buffs- if you are willing to also take some negative effects with it.

With this being The Ultimate Edition, there are 3 DLC’s included in the game: Witch Hunter, Pyramid of Prophecy, and Moon Temple. These DLC’s give you the Gladiator and Witch Hunter classes as well as additional skills, items, zones, and more. Heroes of Hammerwatch also allows for multiplayer up to 4 people total. The local co-op option was still not operational at the time of this review, but the online multiplayer connections are working and there is a highly active public multiplayer base if you cannot find friends to join you. Playing with others is generally touted as the most effective and enjoyable way to play, as the single player mode becomes much more grind-oriented and will take longer.

Heroes of Hammerwatch is the sequel to the original game Hammerwatch, which released in 2013. While set in the same universe, the two games don’t have any cohesive story connecting them. Or really, any story. At all. You start the game with no explanation or tutorial, simply appearing in the town of Outlook which has suffered some hard times and is in the process of being rebuilt. It is up to you to trek through the mines, prisons, forsaken tower, and more to face the perpetual onslaught of enemies in order to obtain money and ore which you will hopefully send to the town before you die. 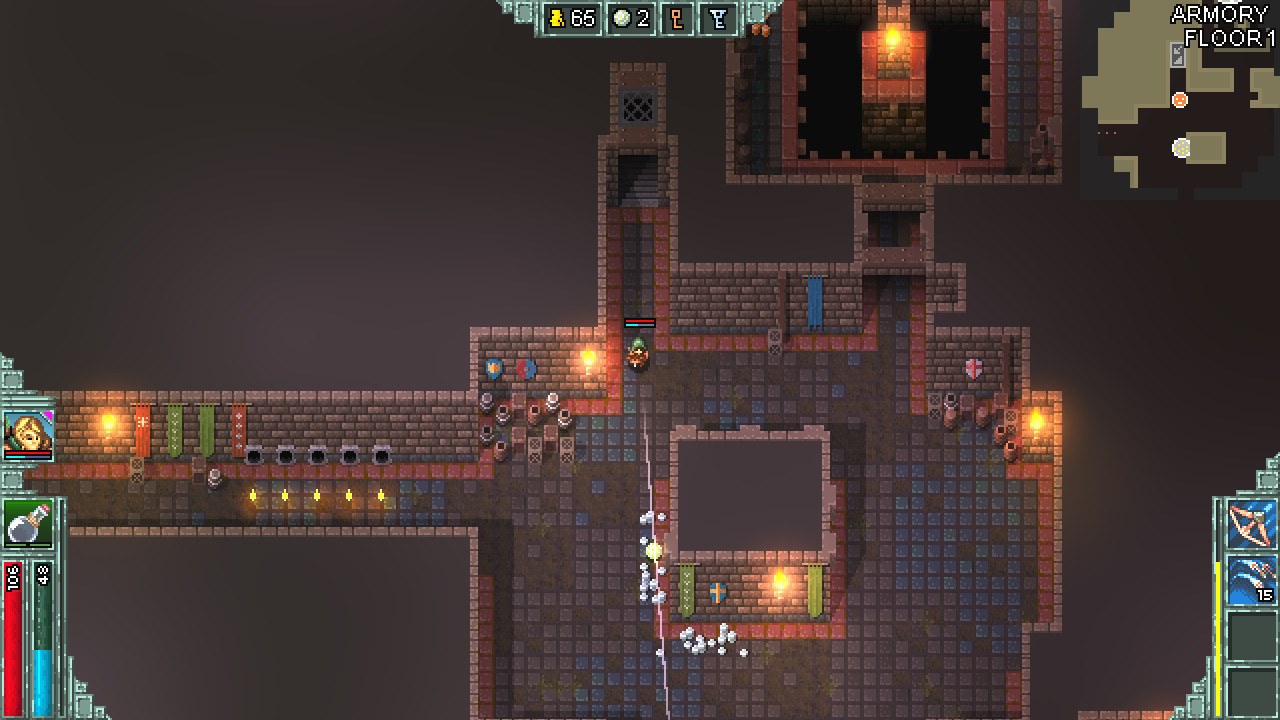 Y Yes, die. You will die many, many times. In typical roguelite fashion, each time you enter into your dangerous adventures… you will not survive. However, upon your death you respawn back in town and any money and ore that you had the foresight to send to town prior to your untimely demise will be waiting in your coffers. With this ore and money you can upgrade the town of Outlook and your heroes to unlock new skills. Once you are ready, you can enter the mines and do it all again!

The art style of Heroes of Hammerwatch is an elevated version of pixel art with special effects that really raise the bar and a color palette that is cohesive while also being a vibrant retro throwback all at the same time. The weather in town changes with each respawn, and the snowfall especially is very well done, being both calming and enjoyable just to stop for a moment and watch. 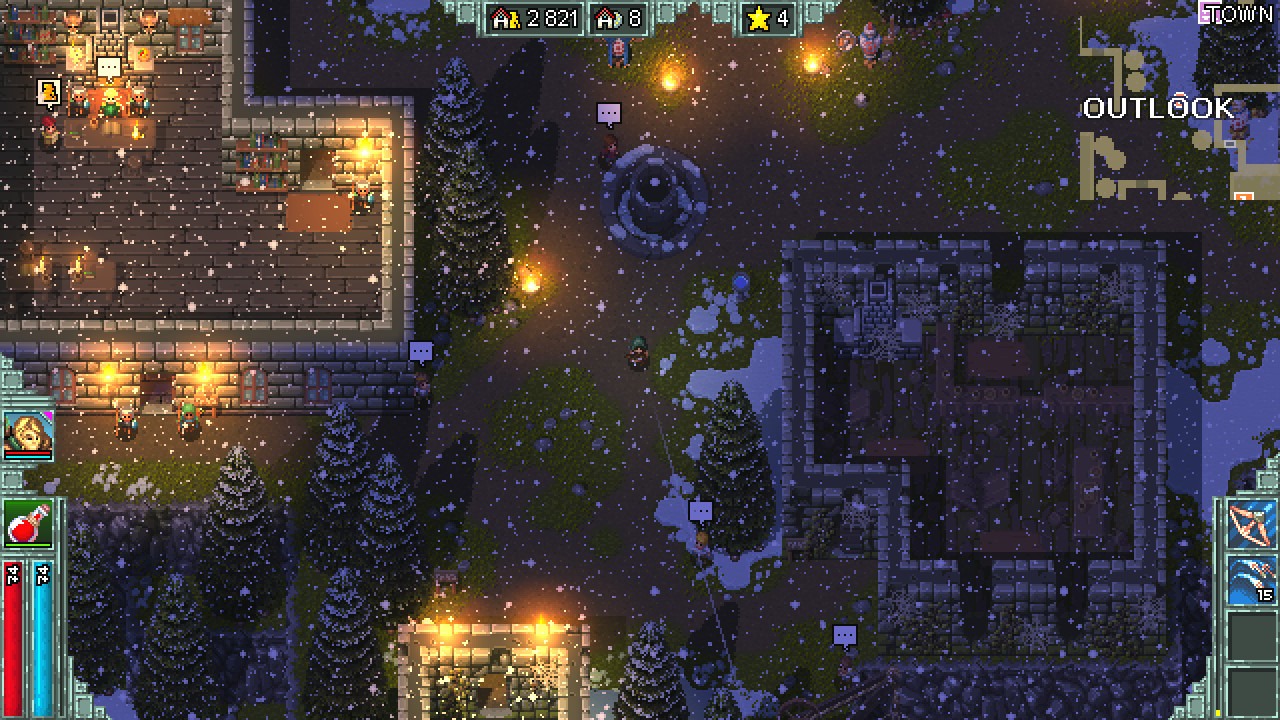 The music for the game is beautiful, being upbeat a well-fitted for the thematic flow of the action. Though it can get a little repetitive after a while, it also is enjoyable enough that you don’t mind coming back to it. In fact, Crackshell has released the official soundtrack for the game for free download after having numerous people request it. Go check it out!

The only real aesthetic flaw in the game is the graphics size- everything is much too small. For players who like to use their Switch in handheld mode, this game is nearly impossible to play. Once I gave up on handheld and played the game docked so it was on a large television, which was better but still gave me eye strain after a relatively brief session of play. If there were an option to zoom in or adjust the resolution, that would help considerably.

Heroes of Hammerwatch has a lot of very addictive qualities. That said, the eye strain due to small visuals, the lack of explanation and tutorial, and the torment endured trying to play single player leaves the game lacking. While I’m not generally a fan of tutorials, this game would have greatly benefited from even just a quick rundown of what to do and where to go. Also adding a couch co-op feature would work well as this game is definitely designed to be played with friends and many would get a lot of use out of playing locally. 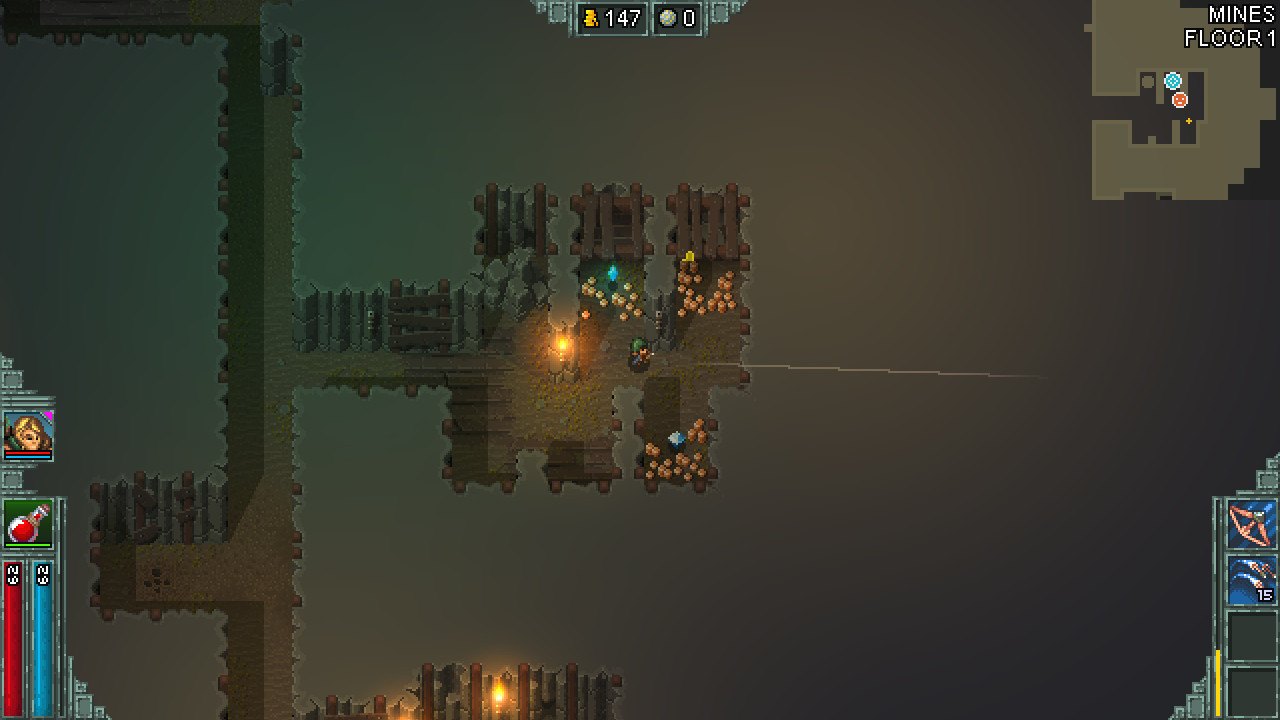 If you are not bothered by those things though, it really is a fun game once you figure out how to play and have done a couple runs. It is hard to break the cycle of telling yourself you will just do one more run when you really should stop. The drive to see if you can get a little further or to collect just a bit more ore will make you want to keep coming back to it again and again. There is noticeable progress between runs which is very gratifying and encouraging, and the upgrades available for the buildings and your own skills are fun to watch grow and build on each other.