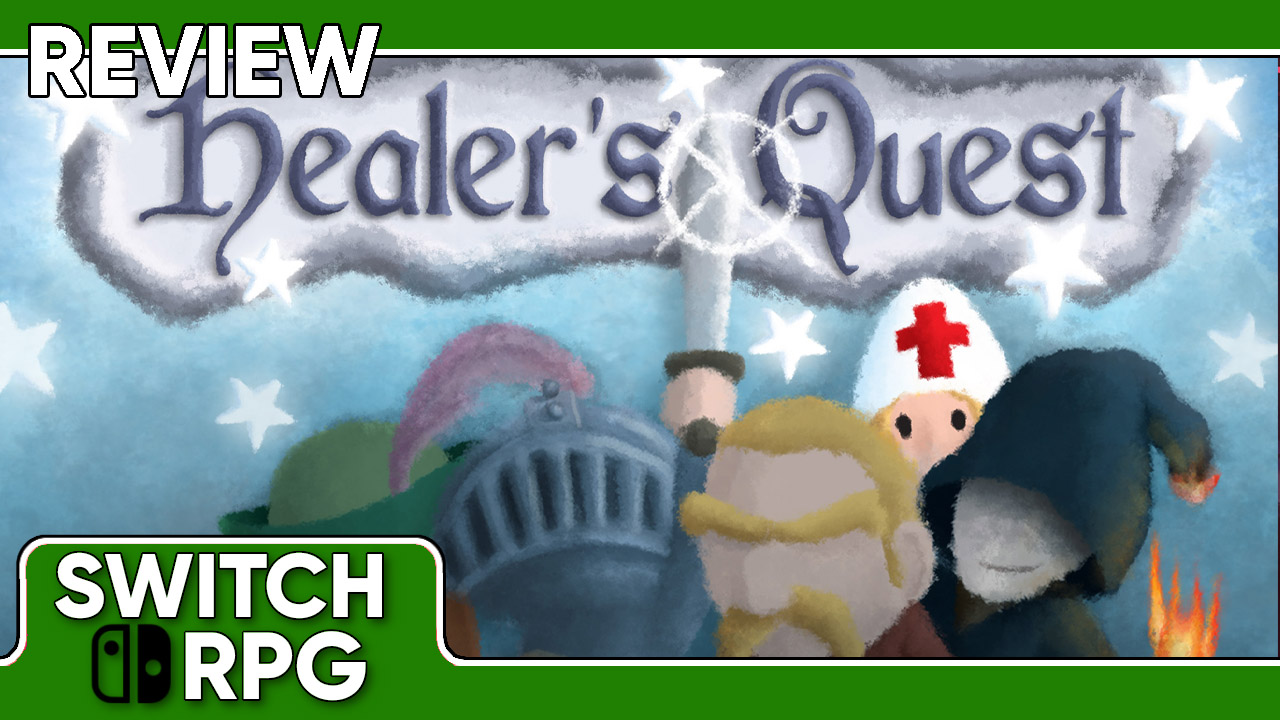 If you’ve played a healer in any sort of multiplayer environment, you know that it can be both a rewarding and depressing experience. Among friends, and with proper skill, you’ll be considered a legend. Screw up in the company of strangers, however, and they may very well berate you until (and well beyond) their dying breaths. In other words, healers are to blame for the downfall of all things, no matter the situation (insert “standing in the fire” or “premature pulling” joke here). Healer’s Quest, as you might have guessed, stars a fledgling healer that is about to get a healthy dose of that reality.

In Healer’s Quest, you assume the role of a lowly healer – customized by the player – that happens upon a magic wand that allows them to, well, do their job. Eager to inform their friend Tanky of the development, the healer sets off only to find them in desperate need of – you guessed it – healing. After the battle, Tanky throws a weak compliment at the healer before running off to continue his own quest.

Now realizing their purpose, the healer pursues Tanky as they quickly build out a classic, well-rounded party to fulfill a quest for the local king. The healer’s comrades barely tolerate his or her inclusion in the party, frequently citing a “lack of usefulness” in the damage department as grounds for permanent removal from the party. Unwavered by the onslaught of negativity, the healer presses on as the permanent-but-not-so-permanent fifth wheel of the group. 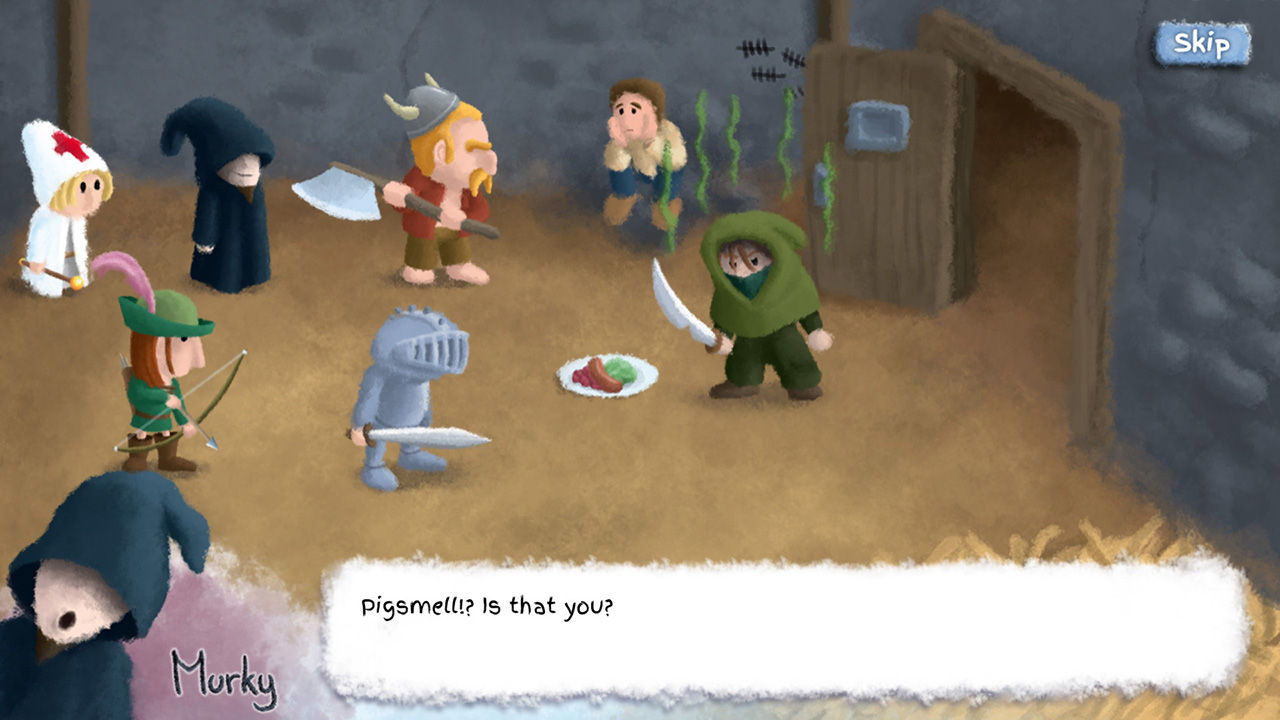 Healer’s Quest, while deadly accurate in terms of shining light on the awfulness that can sometimes be the role, is written in a highly comedic tone that is not meant to be taken seriously. The truth is that the party wouldn’t last five minutes without the healer…but they’ll never tell you that! Instead, the healer is only brought up when the going gets tough or worse, when someone falls in combat. Thankless job, indeed.

The healer’s companions – Tanky the tank, Grumpy the lumberjack/barbarian, Beauty the archer, and Murky the sorcerer – will take every opportunity to belittle them, and this is where the narrative is arguable at its best. Healer’s Quest also doesn’t shy away from breaking the fourth wall – the cast is very self-aware, and this often leads to some entertaining banter. All of this can only take the player so far, however, as the team’s underlying personalities aren’t the best.

The game plays off certain gaming tropes that, while accurate to an extent, quickly grow tiresome as the campaign ages. I don’t believe any of it was done with ill intent, but it just doesn’t appeal to my own tastes. Your mileage will certainly vary here. Ultimately, the game has a couple twists and turns narratively but nothing of real substance — the star of the show, for better or worse, is its humor.

Outside of combat, the gameplay loop of Healer’s Quest is pretty straightforward: explore the globe, fight, level up, and find/purchase gear. Combat, however, is any but traditional as the player’s only goal is to keep the party alive rather than focusing on dealing damage – that is done passively by way of preventing death in the first place. Each of the four damage-dealing party members are assigned to a separate action button on the controller. The healer can equip up to four different spells on the hotbar, changing the active ability by pressing the L and R buttons. Party maintenance is done by selecting the desired ability and pressing the appropriate action button. The free-flowing combat takes some getting used to, but results in immense satisfaction when you keep everyone alive in the midst of more formidable foes. 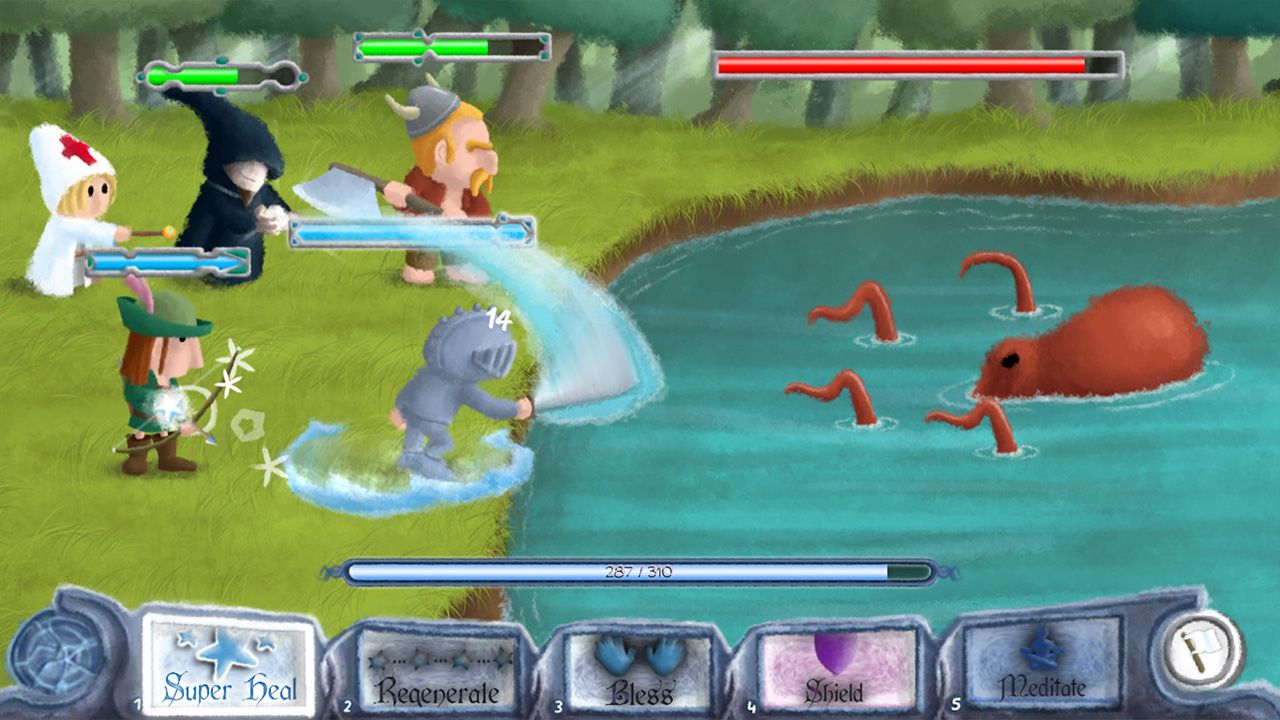 Death is inevitable, but not always the end of the world. A Life spell eventually becomes available that can be used in a pinch, but many encounters can still be beaten with a death or two thrown in there. Worst case, any battle can be immediately retried in the event that your entire party is wiped out, or even before if you foresee defeat. Deaths aren’t as forgivable of an offense outside of combat, however. In the event that deaths happen but you are still victorious, the wounded will begin to hold a grudge against you for your failures. Let too many deaths rack up and they will refuse to act for the first 10 seconds of any fight. Their anger will wane a bit with each subsequent victory, or can be completely reset after relaxing in the local inn for the night.

While it would be easy to assume that strictly healing in combat would be boring, there is a surprising amount of nuance to it in Healer’s Quest. The healer will have to work out a comfortable ebb and flow of mana usage and regeneration in order to be successful, and being limited to only four spells at a time (on classic mode) can further complicate matters. On higher difficulties, the player will be required to frequently adjust their loadout (borderline min-maxing territory) to suit the situation at hand while there is a bit more flexibility and freedom across the board on lower difficulties.

Any healer worth their salt will not only replenish health, but also buff and debuff as needed. Healer’s Quest features some particularly nasty debuffs that can turn the tide of battle in the opposition’s favor in an instant – you have to be mindful and adapt as quickly as possible else suffer the consequences. Confusion and vampirism debuffs are especially wicked, as the former will damage your own team while the latter will completely stop healing on those stricken with it. In order to add some oomph into the toolkit, the healer is able to spend star points (granted upon any level up) in a skill tree system. These points provide various bonuses to the spells of your choosing, but are only rewarded sparingly. While the player can eventually reset their skill tree for a price, traveling can be a pain and makes the initial spending of star points that much more meaningful. 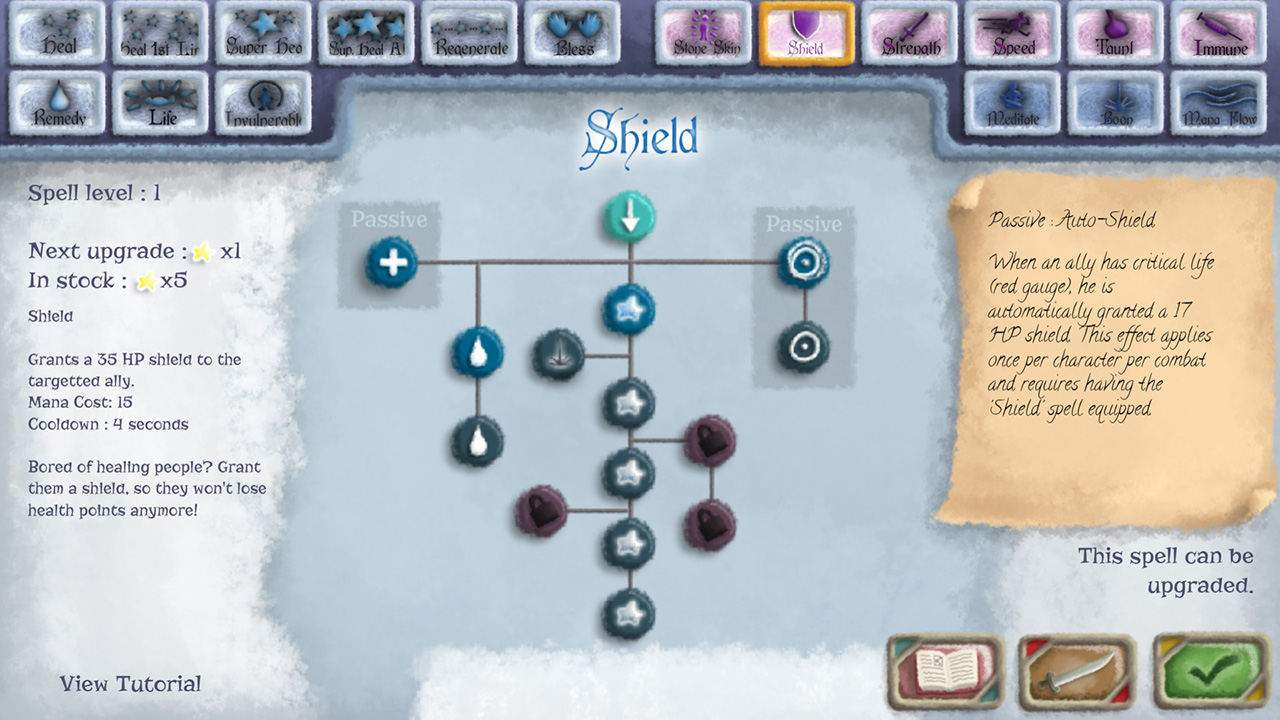 On traveling and the world itself, it is a bit of a mixed bag. There are several optional things off the beaten path that the player can participate in, but traveling (and especially backtracking) can be a pain. Healer’s Quest utilizes an extremely high encounter rate that will prove a nuisance when you want to just get from point A to point B. When following the path of the main campaign, these encounters are often used as a means of conveying the story or serving simple banter – high frequency makes sense in that respect, but doesn’t translate as well when pursuing other activities or objectives. There will be moments where the player will want to backtrack for whatever reason, but may decide not to simply to avoid the issue altogether.

An assortment of collectible gear goes hand-in-hand with the customizable hotbar and skill tree system. Though some of it is quite useful, especially in certain encounters that require a bit more optimization, much of it feels like dead weight. Some items are meant to be flavorful and humorous, like Murky’s weapon that does -10 damage against female opponents, but the others just have little to no real-world use. It’s definitely not the best equipment system out there, but is certainly not the worst.

The presentation in Healer’s Quest is a bit uneven in quality, but certain aspects of it are worthy of some appreciation. The watercolor approach to the visuals pairs nicely with the medieval setting – its lack of depth and complexity feels surprisingly appropriate for “olden times.” Animations are limited, but effective nonetheless; witnessing the various dialogue sequences play out with some comedic fighting thrown in there never really gets old. The visuals have a certain level of innocent, simplistic charm that is hilariously ironic considering the mature subject matter of certain events. 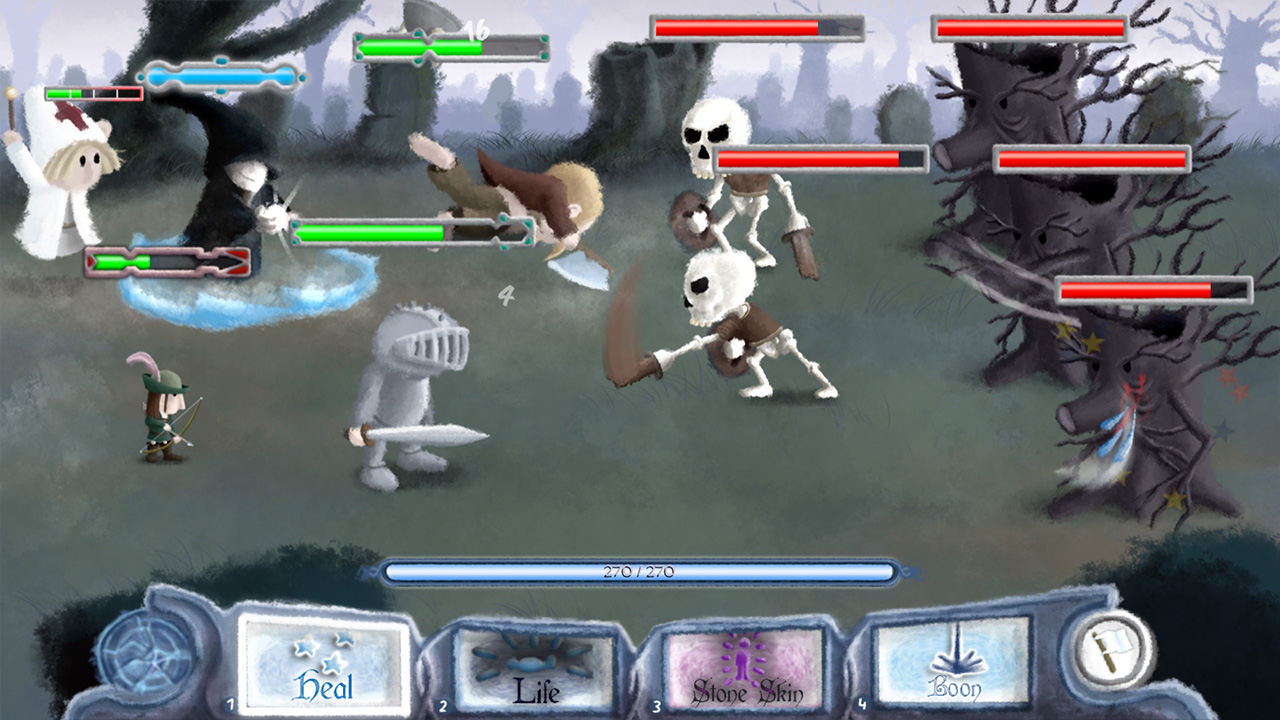 The same cannot be said for the music and sound effects, as they are void of any meaningful design and placement. You’ll likely forget that the music even exists and will become quite annoyed by the healer constantly shouting the name of each spell – the latter has some purpose at least, as it can be useful to hear what ability you have currently selected in the heat of the moment. Sound effects seem like they were designed to amplify the comedic tone of the narrative, but end up coming short of both that and just being impactful.

When at its best, Healer’s Quest is quite a unique, rewarding experience. Unfortunately, there are some concerning flaws under the hood, some of which are game-breaking. General balancing is a big issue amidst the game’s multiple difficulty levels. I achieved 93% completion on Normal and found it to be fair, but challenging at times. Some enemies were ridiculously overpowered, though – some random encounters were more menacing than even some of the game’s bosses. I ultimately decided it was a bit too spicy, and opted for a notch lower on the difficulty scale – no problem, there are multiple settings available, but you have to start completely over to adjust. Also fine. 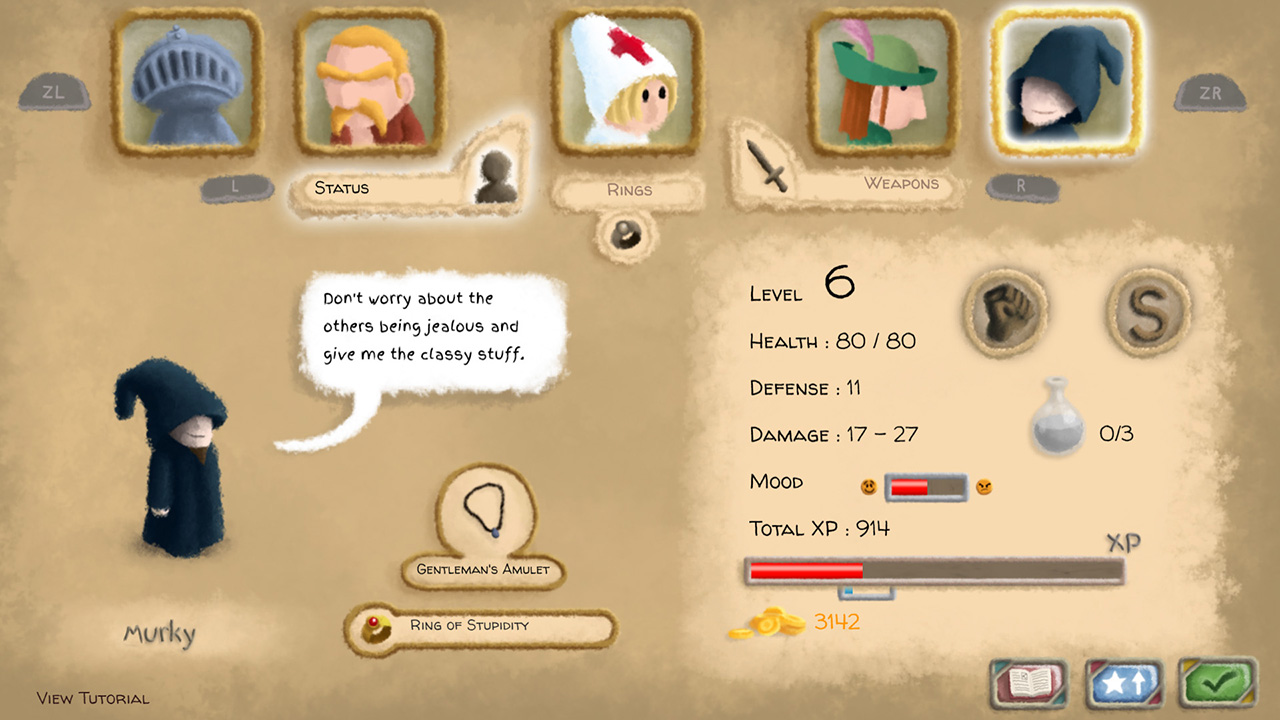 What I discovered on my second run was that most things were laughably easy, while certain bosses – notably the treant – were even more difficult than their higher difficulty counterparts! While I did not test each and every difficulty – there are at least four – it is a bit damning when this kind of balancing (or lack thereof) is so all over the place.

Alas, my second adventure came to a premature end at 95% completion not because of the challenge, but rather a game-breaking bug. I can just reload an older save, right? Nay, Healer’s Quest relies completely on autosaves, meaning this run is a complete wash. Although the game’s shorter length (5-10 hours) makes jumping into another run quite easy, I worry that I’ll once again throw away hours of progress because of the previously mentioned game-breaking bug.

For now, the unique, entertaining perspective provided by Healer’s Quest is marred by some concerning issues. On one hand, the portrayal of the healer as a thankless job is spot-on, and the combat surrounding it can be surprisingly fun and exciting. Game-breaking bugs aren’t fun and exciting, however, and don’t get me started on the lack of manual saves. There’s some good stuff tucked away in this game, no doubt, but tread carefully.