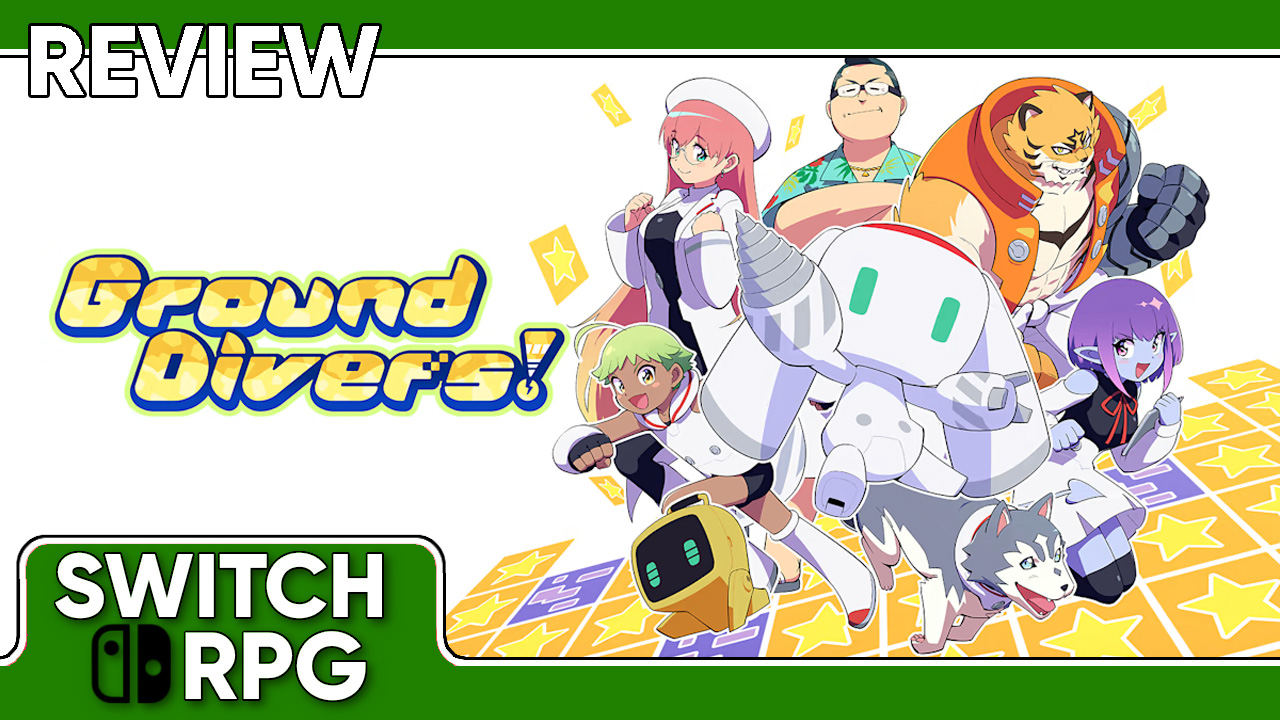 Ah, the roguelike. Everyone’s favorite pastime, perhaps only rivaled by the Soulslike genre, for doling out equal parts pain and pleasure. They can be stressful and aggravating, but can also be surprisingly enjoyable and satisfying at times. Ground Divers! By Arc System Works, however, is one of the more relaxing roguelites available thanks to its overall simplicity and whimsical cast. But will the simplicity and cuteness come back to bite it? Let’s get to digging into this mining adventure and find out! 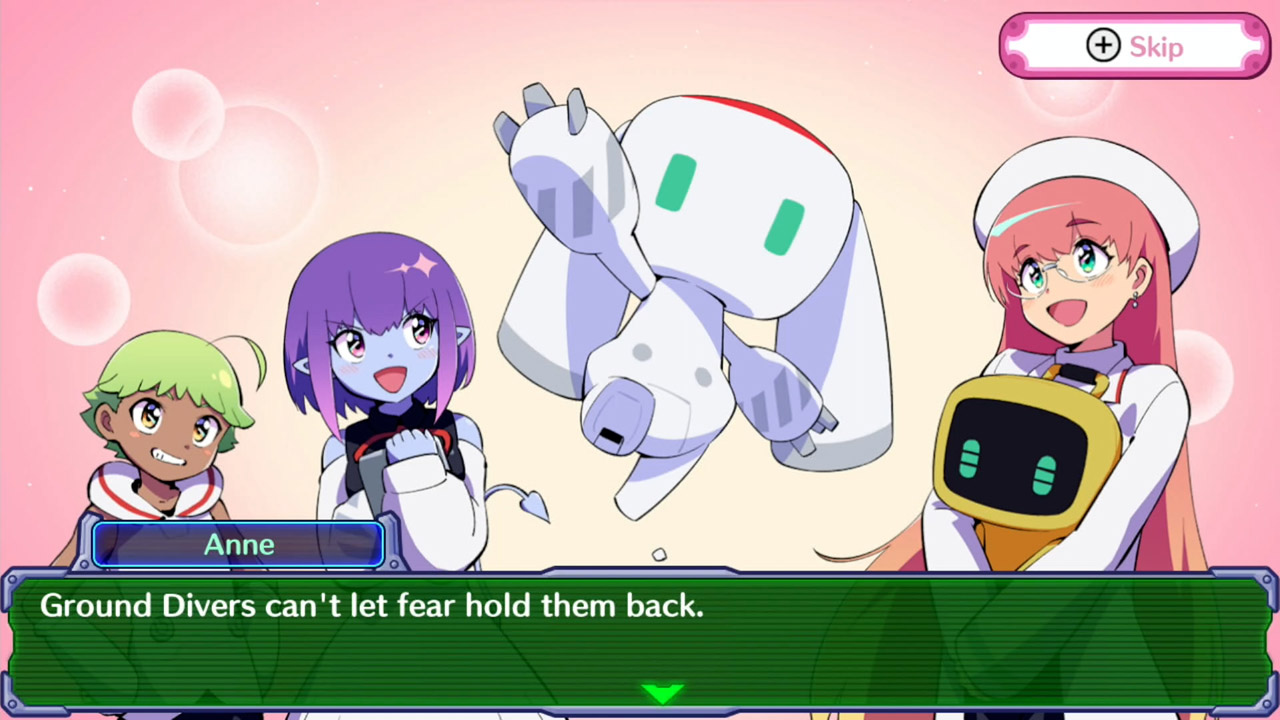 Ground Divers! takes place in a world in the midst of an energy crisis. Thanks to rapid expansion and technological advancements, the planet has been depleted of its energy resources. But thanks to divine intervention, a new form of energy known as “rare matter” has been found below the surface of the world. While this newfound resource is sure to solve the world’s crisis, its acquisition calls for the development of hardy mining rigs known as Tsuruhashi. The player is but one of many Tsuruhashi pilots within one of many mining companies with hopes and dreams of striking it rich…and maybe saving the world.

Despite the energy crisis on hand, Ground Divers! is not meant to be taken all that seriously. The entire cast is goofy, preferring playful banter over serious discussions. While most of these conversations are entertaining, some characters, notably the one obsessed with another team member, quickly wear thin. There’s also the obvious concern of why this world amidst an energy crisis needed divine intervention to understand the benefits of excavation. Either way, this is not the kind of game for a deep, emotionally complex story, and that’s okay. 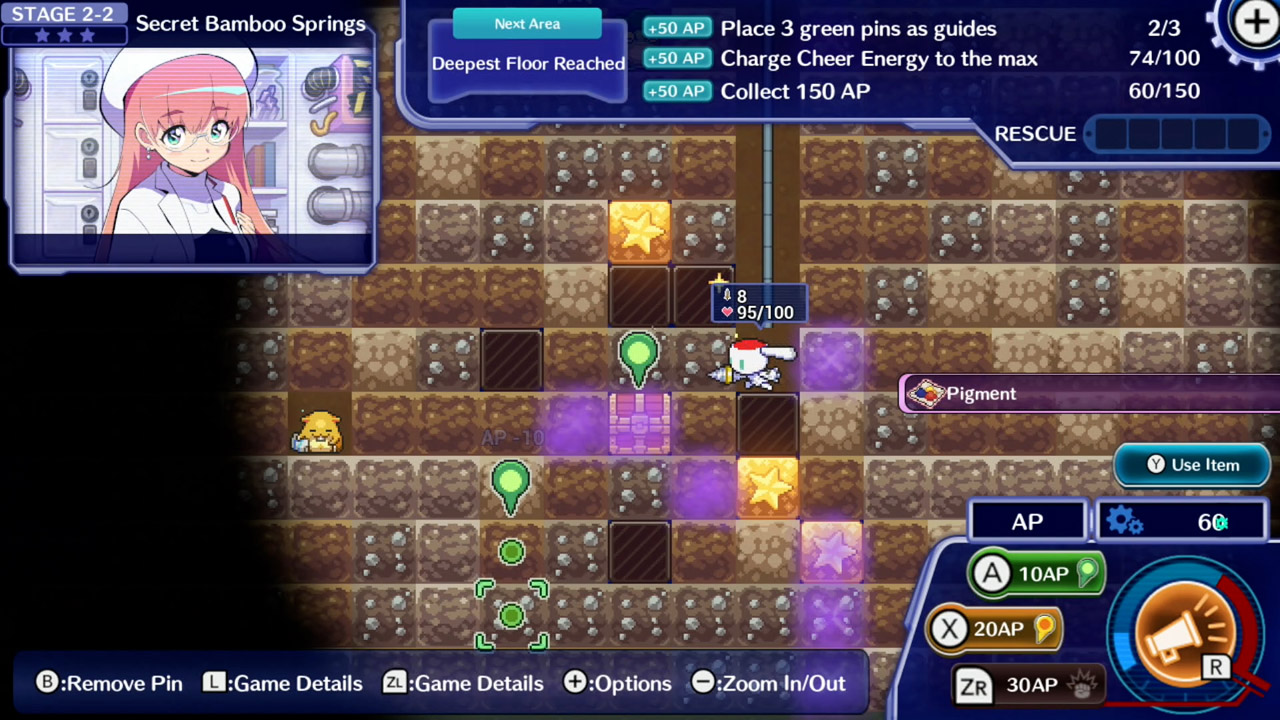 Ground Divers! is a real-time strategy roguelite revolving around time and resource management. The player and their Tsuruhashi will dig across seven main stages and numerous sub-stages with the ultimate goal of finding rare matter. Rather than moving the Tsuruhashi in real-time with standard directional controls, the player instead sets down pins on the grid-based map to plot a line for the mining suit to dig. Each individual pin requires a certain amount of resource, AP, in order to set, though set pins can be removed and re-set at will, which will also refund the used AP. Almost every action requires AP, but AP is generated through mining blocks, destroying enemies, and selling off and/or using certain items. In other words, one has to spend money to make money.

This pin-based movement isn’t always as straightforward as it seems, though, as the player will run into specific blocks that, depending on their current loadout, may be hard to bust or could even be harmful to the mining suit, and there’s always a chance to run into an enemy or two along the way. Speaking of enemies, they will only tolerate the Tsuruhashi for so long before they invade and destroy the camp, resulting in a game over (and lost resources). Fortunately, the player has plenty of opportunities to go back to camp and save their hides (and resources) before things go awry. 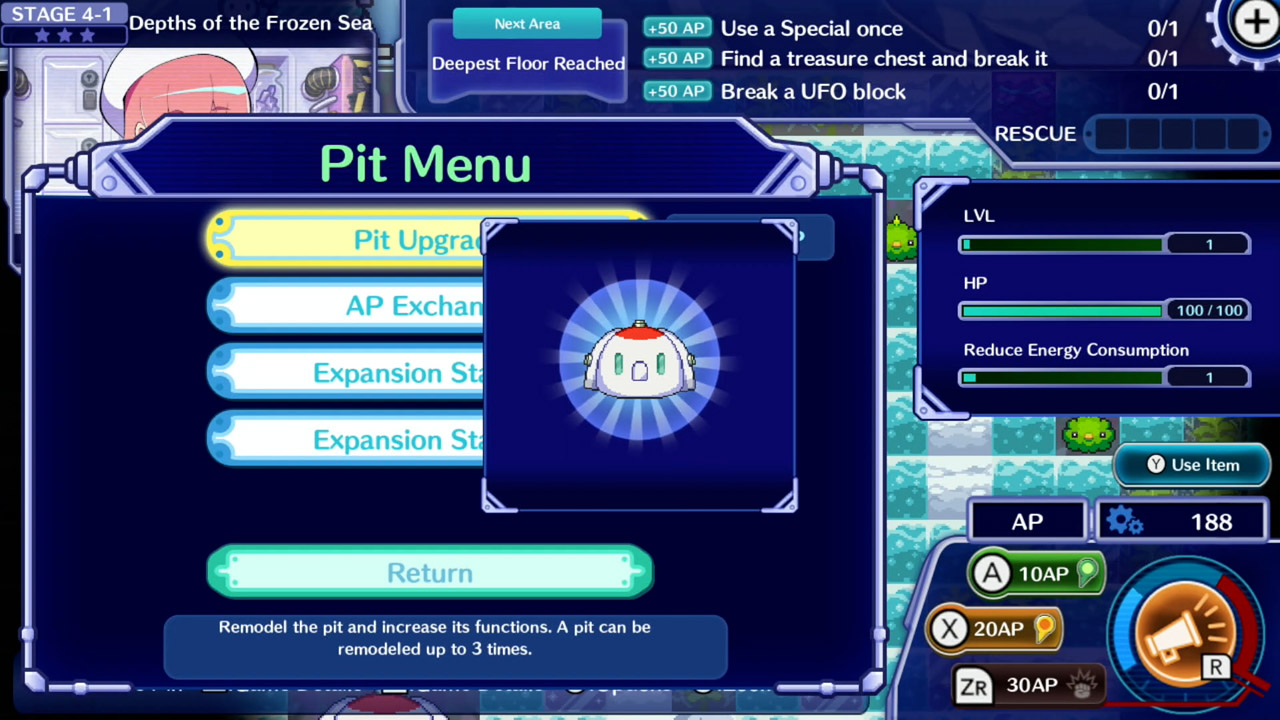 Additionally, pits (or sub-camps) can be created within the mining fields that will temporarily halt the timer and give the Tsuruhashi access to other benefits. A fully upgraded pit allows a means to exchange items for AP, level up Tsuruhashi, scout obscured areas of the map, purchase various support droids, change attachments (essentially the mining suit’s drill), and more. Most of these services require AP to use, which once again plays into the overarching concept of resource management.

Ground Divers! isn’t an RPG-heavy roguelite, but it does have some bits of progression in that style. The aforementioned levels will increase the health and damage of the Tsuruhashi, the latter of which influences both the damage dealt to enemies as well as to mining blocks. Character levels do not carry over across main stages but do persist through sub-stages when tackled in succession. The mining suit also features a single attachment slot, which determines the type of special move the drill can use in addition to other bonuses. Attachments are one of many things that can be crafted back at the main hub, though their benefits have a wide degree of variance and the subsequent results can be rather hit or miss.

Combat is basic in Ground Divers!, with the Tsuruhashi automatically attacking anything within range. Enemies have a certain aggro radius that will spark off a beeline approach to the player should they test it. It can be both advantageous and detrimental to pursue enemies depending on the player’s path, progression, and health, as evasion is sometimes necessary for survival but enemy’s innate digging can also open up better suited paths for the Tsuruhashi to take. For such a simple game, Ground Divers! does feature a surprising amount of depth and on-the-fly strategy…but only in certain situations. 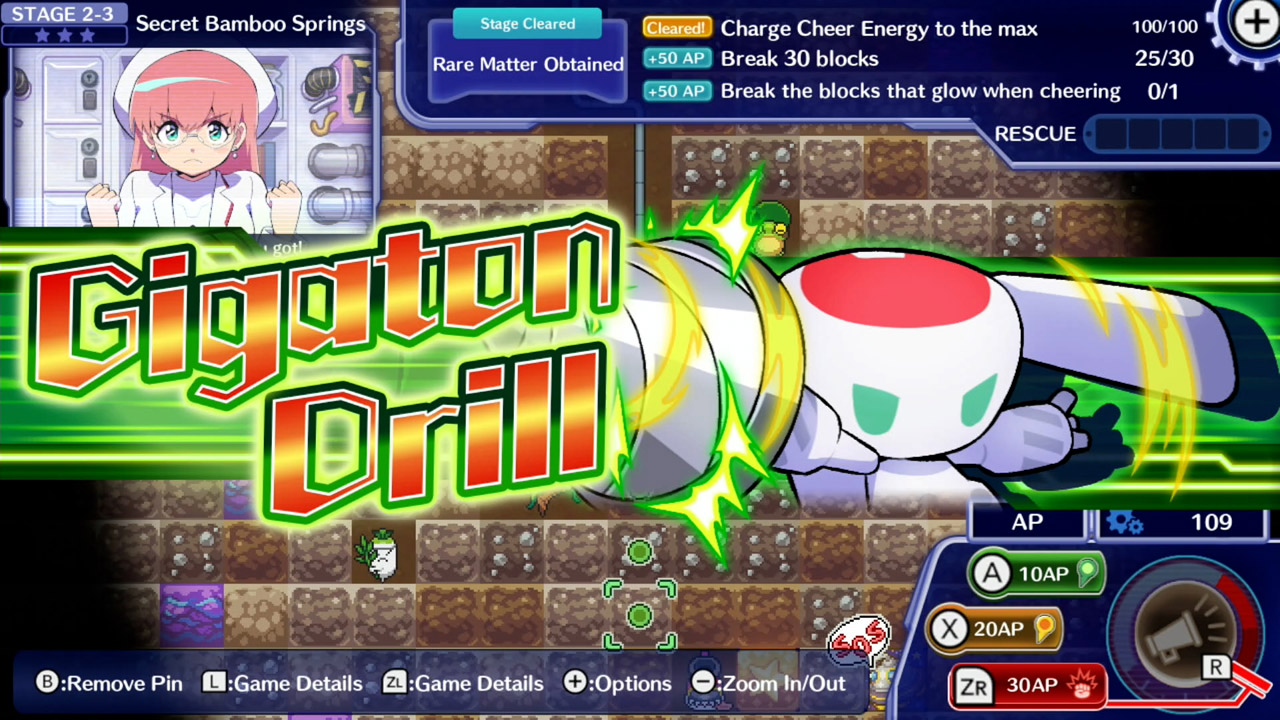 When in doubt, the mining suit can dish out the special move associated with whatever attachment they’re currently using. These special moves require AP and a user-generated resource, cheer energy, to use. The player can cheer on the Tsuruhashi with the R button, which will not only increase their mining and combat efficiency for the duration, but also make special moves available upon reaching certain thresholds. Regardless of special move usage, the cheer resource decays over time, and also gets increasingly more difficult to maintain as the mining suit digs deeper into the earth due to having to be pumped all the way from the main base. Don’t ask how cheer energy is delivered through subterranean pipes – it’s magic. Science. Maybe both?

Beyond all that, Ground Divers! allows the player to unlock accessories to decorate the home base, customize the skin of the Tsuruhashi, and a few other odds and ends. One can also revisit main and sub-stages as many times as they want for additional resources, or to officially “complete” stages by achieving a star ratings in all three categories. These optional completion challenges are where the rubber really meets the road, as the bulk of stages and sub-stages are otherwise extremely easy to beat. And fortunately, for those completionists, stage contents are randomly generated each and every time they’re visited, though the goals always remain the same. 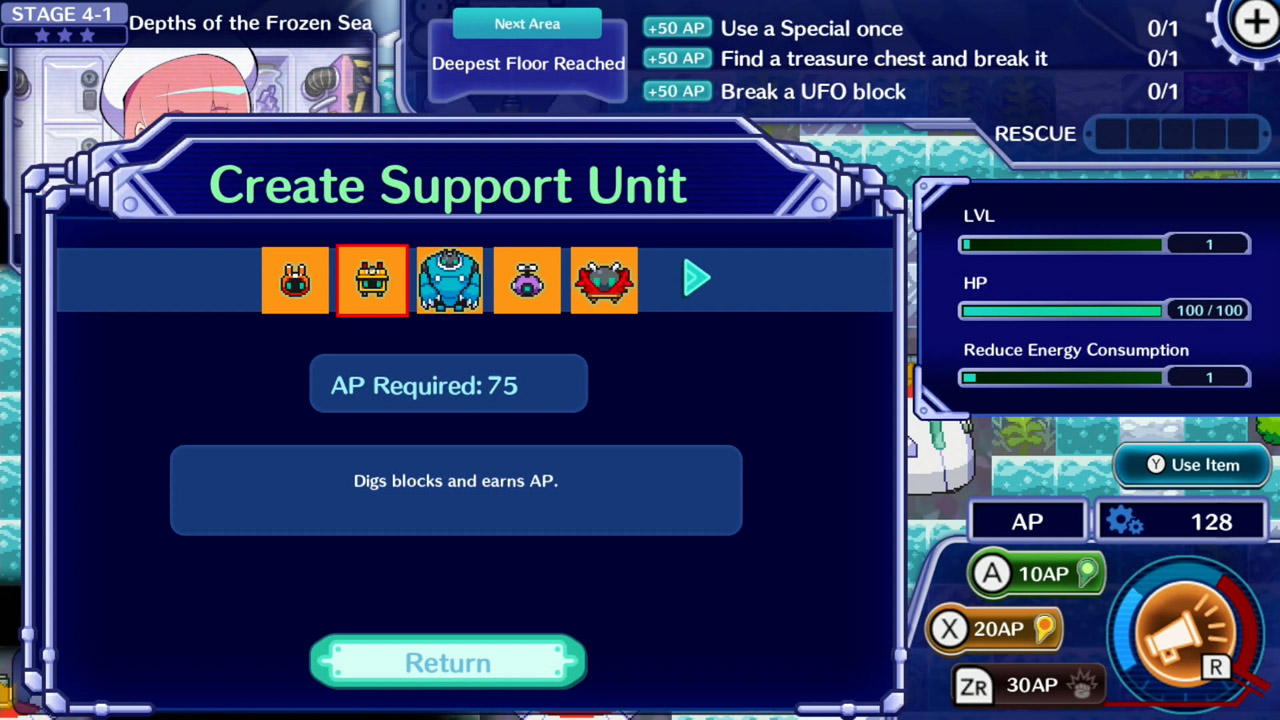 While there are some positives to consider here, the simplistic and repetitious nature of Ground Divers! is ultimately its downfall. The truth is that outside of completing challenge runs and traversing a handful of more difficult sub-stages, everything can be beaten quite easily. And the lack of any meaningful character progression carrying over across stages makes things even more dull.

Although RNG is synonymous with the roguelike, the RNG attachment crafting is a bit much. Each category of attachment comes with a long list of potential modifiers, and every craft requires a substantial resource investment in order to craft them optimally. Because of this, it’s not uncommon to craft many times before getting something actually usable. Less RNG in this case – or better yet, simply finding random attachments out in the mining fields – would make the system far more player friendly. And completionists will need to prepare for the stars to align for many of the challenge runs to be successfully completed. All things considered, Ground Divers! has a sizable amount of content appropriate to the cost of entry, but it’s doubtful that all facets will sustain the majority of players long term. 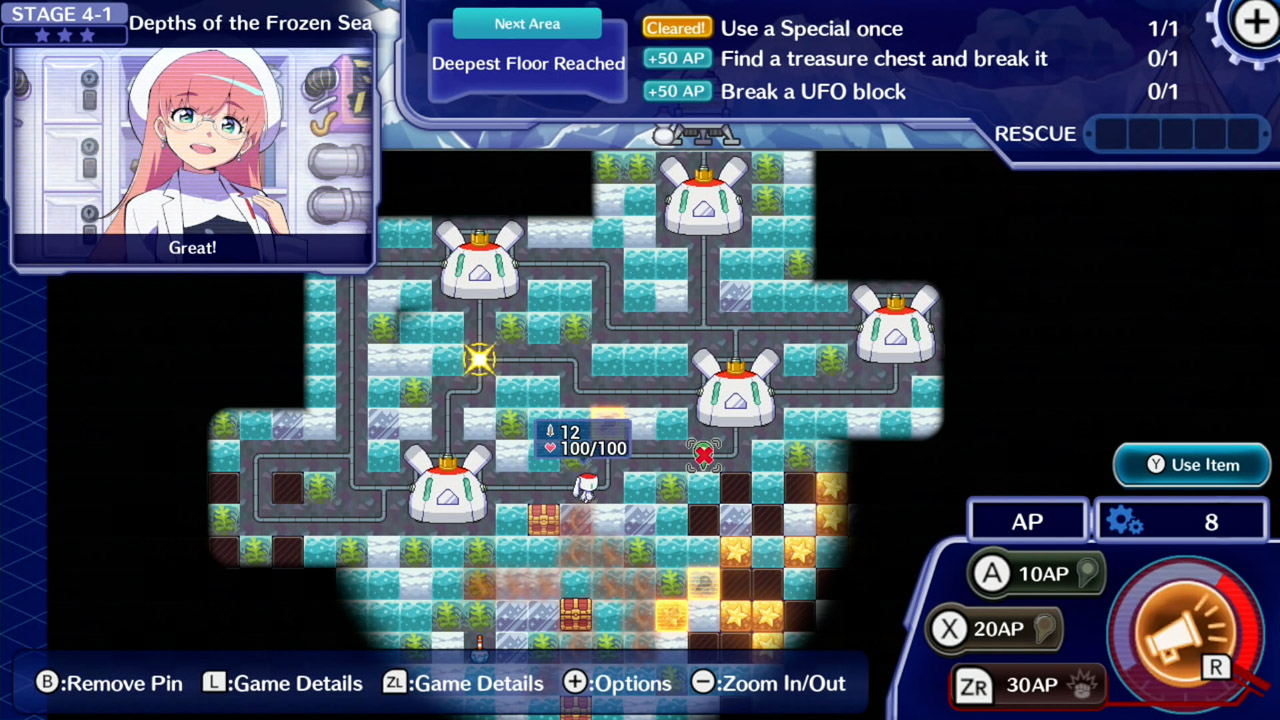 Ground Divers! is by no means the most visually impressive roguelike in existence, but it does have its moments. Shigeto Koyama and Kakeru Kakemaru spearheaded the mech and character designs respectively, and these easily represent the best aspect of the game’s visuals. The grid-based nature of the mining areas certainly come with some aesthetic limitations, though some effort, such as biome changes, has been made to keep things fresh regardless.

The anime portrait influence trickles down to enemy and ally sprites, which plays right into the overall “carefree and cute” theme throughout the game. Ground Divers! also features a solid soundtrack covering a broad palette of styles, from casual techno and Asian-inspired pieces, to tunes appropriate to tranquil, frozen tundras and boiling, volcanic landscapes. Collectively, the presentation won’t set the world on fire with appeal, but it’s more than acceptable.

The deeper you dig into this mining adventure, the more you uncover the unfortunate truth of its simplistic design. While it’s fun to explore the different stages a time or two, it quickly loses its luster when having to dive into them multiple times over in the pursuit of precious resources. The core design of the gameplay doesn’t benefit that much from traditional roguelike procedural generation, making subsequent runs far more grating – and more quickly – than other games in a similar vein. The only long-term sustainable bits lie in a handful of more challenging sub-stages, as well as the pursuit of all the star achievements. But unless you’re a completionist, that really isn’t going to appeal to you.

The extreme reliance on favorable RNG and deep resource investment to build new attachments simply isn’t fun, and the lack of any meaningful, permanent character progression only makes matters worse. That said, Ground Divers! is by no means a bad roguelite, but with so many other options on the Nintendo Switch these days, it’s hard to wholeheartedly recommend it…unless you’re just looking for a change of pace by way of its mining-centric campaign and bubbly cast.