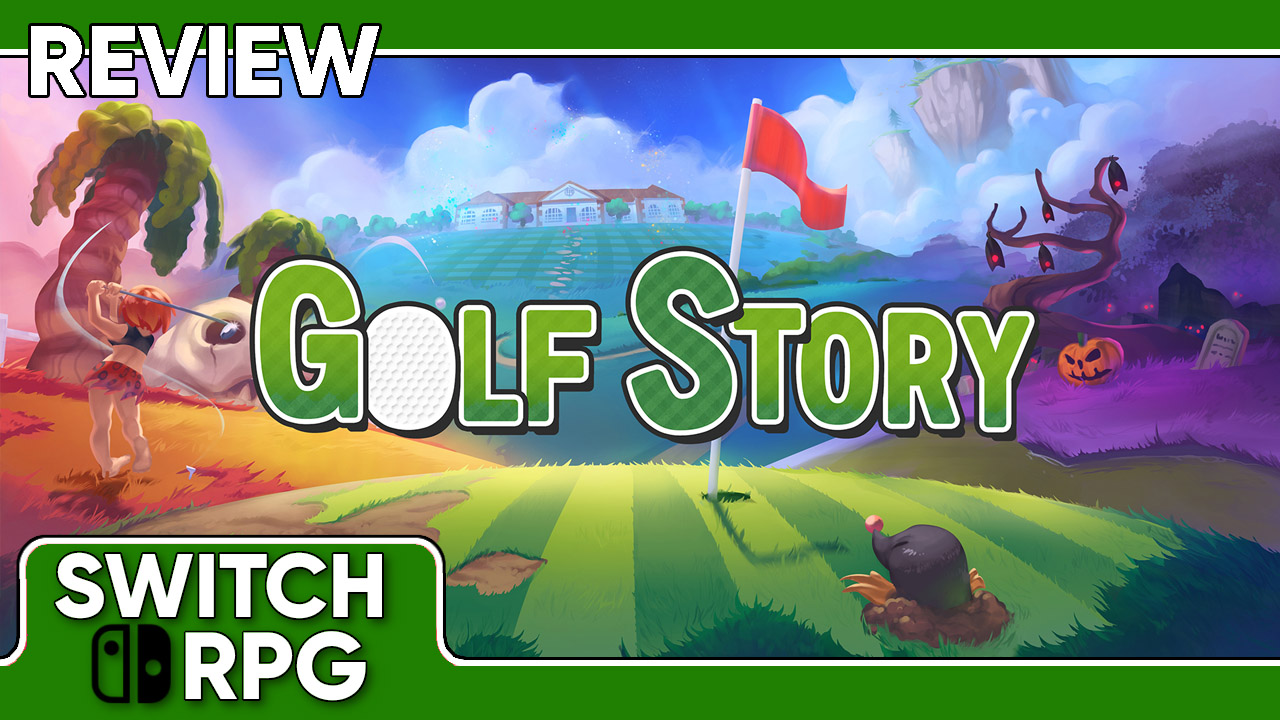 Golf Story is a title that has been on my radar since it was released for the Nintendo Switch way back in 2017 (yes, I’m a tad bit late to the game). However, it wasn’t until I saw the game included among the many excellent sales on the eShop over the holidays that I finally decided to purchase it. While I have no special proclivity for the sport of golf, or golf games in general, I’m always down for a good RPG and have heard many positive things about Golf Story over the years. In fact, my real life experience of golf is limited to Putt-Putt, visiting a driving range once, and enjoying the movie Happy Gilmore as a child. Oh, and I was pretty obsessed with the golfing simulator featured on Wii Sports some years ago. Fortunately, I was informed by the Internet that even for someone who would never, ever dare watch golf on TV, or whose actual interests in the sport itself are as non-existent as mine, there is still much to enjoy in Golf Story. Hence, I bought it, and, after roughly the 20 hours or so that it took to complete, I am pleased to report that more or less everything I had previously heard about the game turned out to be true. 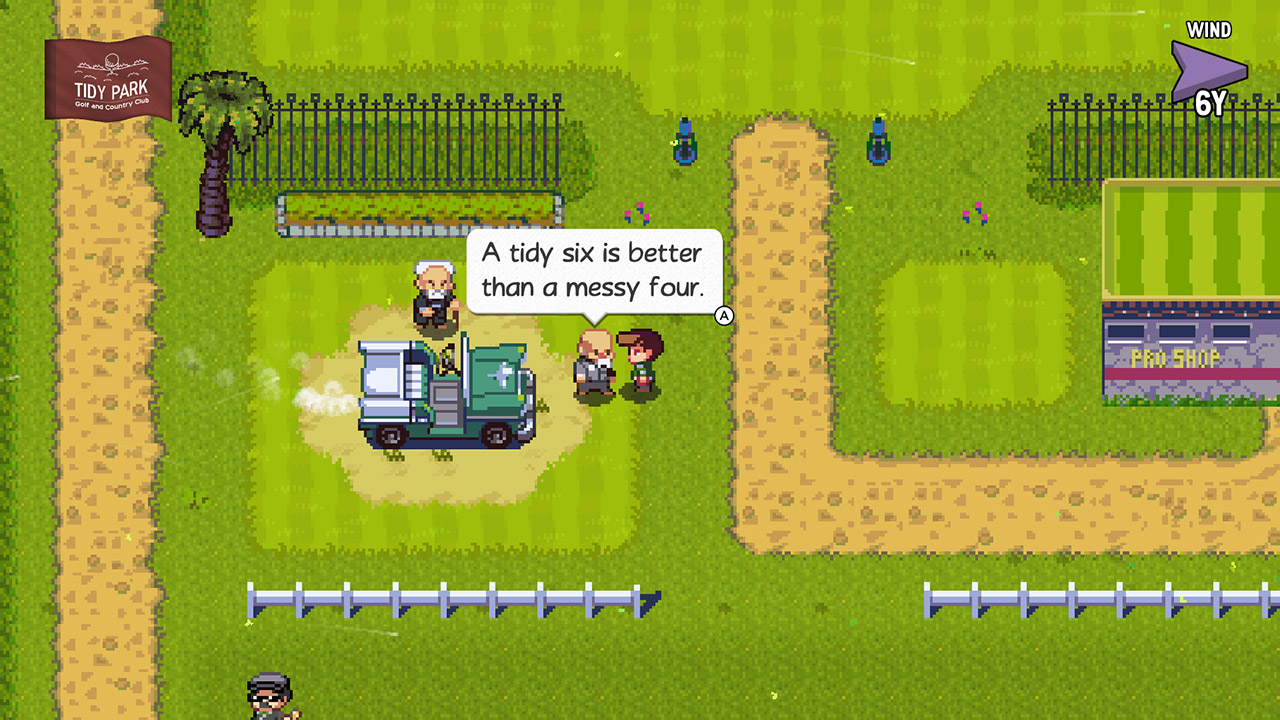 The story in, well, Golf Story, is simple and straightforward. Its narrative is basically on par with the level of sophistication that you’d expect to find in your average mainline Pokemon games. Whereas in those kid-friendly titles you start by receiving a starter Pokemon and then set out on a journey across land and sea to achieve the status of region champion, Golf Story begins with a flashback of the nameless protagonist playing golf (what else?) with his father as a young lad. The purpose of the introductory cutscene is to reinforce the object that will become his passion later in life, and the aim of the journey that begins when you take control of him some twenty-years later: to be a golf pro and the tournament champion. Of course, along the way, you will need to convince a prospective coach to take you on, overcoming a number of obstacles and completing a series of wacky quests that are never predictable and only tangentially related to golf; these include cutting grass, assisting an archeologist dig up some ancient treasures (including antique golf equipment), solving a murder-mystery, fighting undead skeletons by hitting golf balls at them, and other ridiculous tasks that were always, at the very least, entertaining.

Throughout your adventure you also play frisbee golf and control a flying drone(!). To summarise the narrative and dialogue that underlies it in Golf Story, it is unremarkable but serves its purpose well enough. Or, perhaps more charitably (and to use the cliche), it is simple but sweet. And while it is also like Pokemon in that the writing always felt somewhat shallow and unserious, Golf Story does stand out insofar as it has a lot a charm; to its credit, it is quite witty and more than once I found myself chuckling along at the dialogue if not the absurdity of the situations I found myself in. 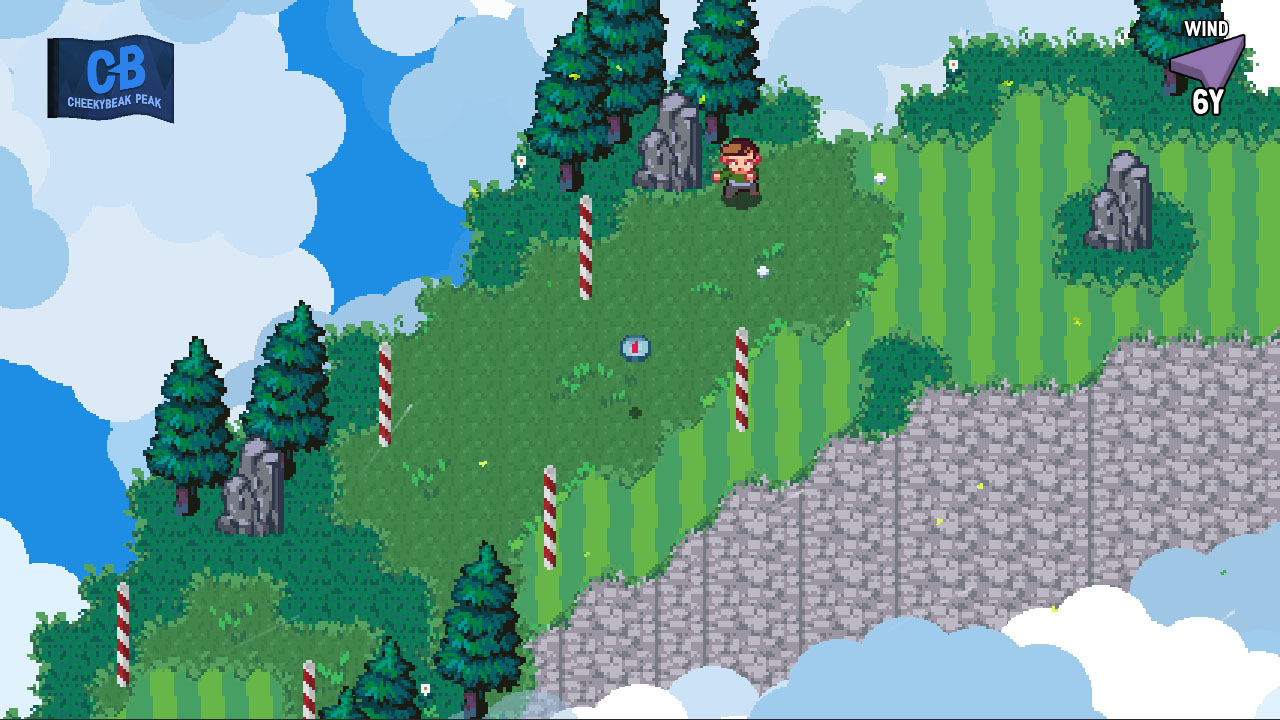 All that being said, while Golf Story is a rather simplistic role-playing game (at least in its treatment of quests and stats, which progress via experience points gained from completing various tasks and which usually involve swinging a club), it remains at its core a fairly deep golf game. And on this front the developers totally nail it. Even for someone like myself who knows virtually nothing about golf outside of the limited exposure already mentioned, and despite the game’s dated, 16-bit graphics (a style which I still absolutely adore), the game does a fantastic job of steadily introducing new gameplay mechanics that allow for a surprisingly in-depth and thoughtful golfing experience. At every hole you are forced to consider the types of clubs you will use, the wind trajectory, the angle at which you will hit the ball, the amount of force you will use, accuracy, and so forth.

This might all seem quite obvious for a golf game, but again, given the fact that I could have easily imagined playing this game twenty-five years ago on the Super Nintendo, I was impressed at just how fluid and natural it all felt. The golfing itself is actually very addicting and oftentimes I found myself compelled to get through some of the more mundane quests and text simply to get on with the next round of golf. To add to the enjoyment of the gameplay, the minimalistic soundtrack, consisting of simple beats, groovy bass lines, and occasional horns, fits perfectly with the vibe of the game, whether on the golf course or fulfilling some quirky mission (like melting golfers who have been frozen in ice on a snowy course by using—wait for it— fiery golf balls. Yes, seriously.)

This brings me to my biggest criticism of Golf Story. The story works for what it is but where the game really shines is when you’re playing nine holes. Unfortunately, whereas the game had the potential to offer great replay value, outside of the story mode the features that are available if you want to kick back and just straight up play golf are severely restrictive. Sure, there is a two-player mode so that you can play against a friend, but there is no online functionality and worse, no option to even play against the CPU. You’re basically confined to competing against yourself and your previous achievements—and while it tracks whether or not you’ve scored a birdie, eagle, or hole-in-one in previous playthroughs, it never records any additional stats. For me, the game would have taken a giant leap forward if it only offered more options than just a bare-bones quick-play mode. A season mode? A tournament? Something along these lines would have been extremely welcome and would have made it a game that I could easily have seen myself replaying for months and months. 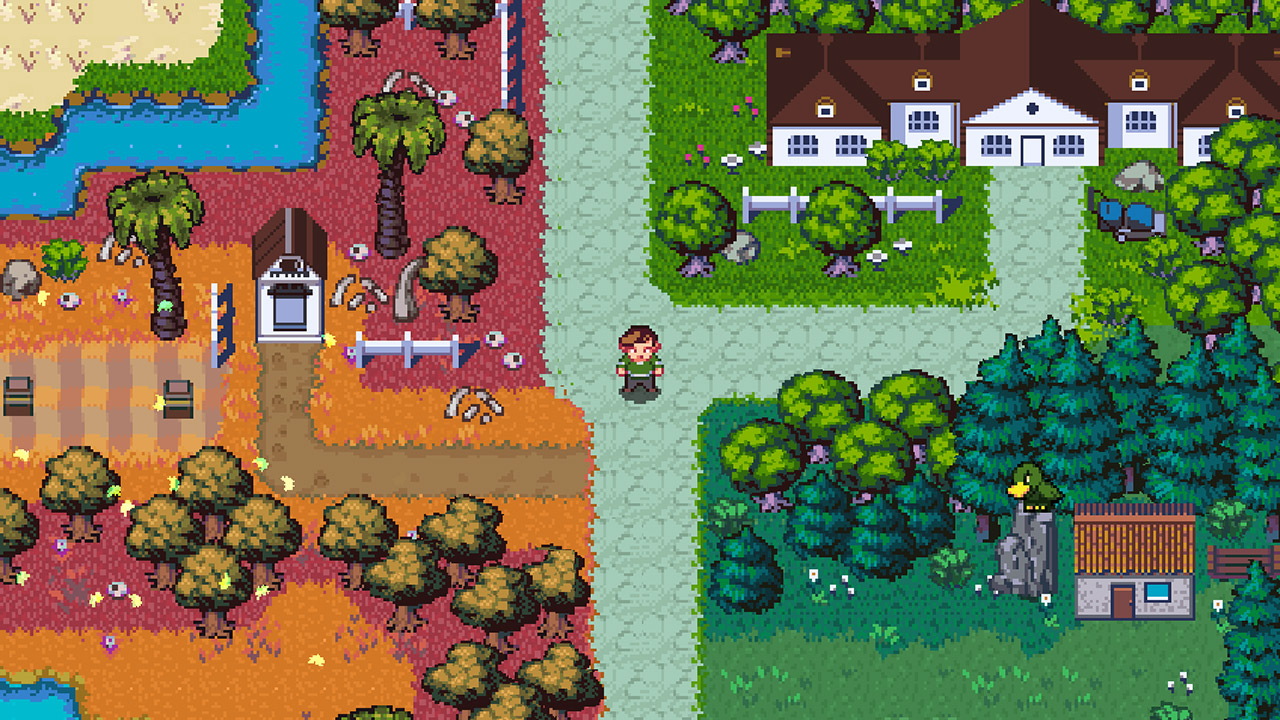 All in all, Golf Story is by no means your typical RPG. Its essence is that of a solid golf simulator, albeit one with a pleasant enough story slapped on to it, and stitched together with traditional RPG-elements in how it deals with EXP gained on the golf course and upgrading stats and equipment. While the two main issues I have with the game are the lack of any other game modes outside of Story Mode and Quick Play, and the sometimes dull tasks sprinkled between the meat of the game, i.e., the actual golfing, the game does manage to get enough right that I would recommend this game to pretty much anyone, even if golfing and role-playing games aren’t your typical cup of tea.

After all, and I mean this in the best possible manner, Golf Story isn’t typical (I could add that the game was a bit too easy, minus a difficulty spike at the end of the game that I found a bit annoying, but all-in-all I never really felt that this detracted from my enjoyment). I eagerly anticipate the sequel that Australian-based developer Sidebar Games is currently working on, Sports Story, and now have reasonably high expectations for them to maintain the consistent level of genuine fun in the new gameplay mechanics that will be introduced as the franchise expands beyond golf. And among these, please give us some online play!