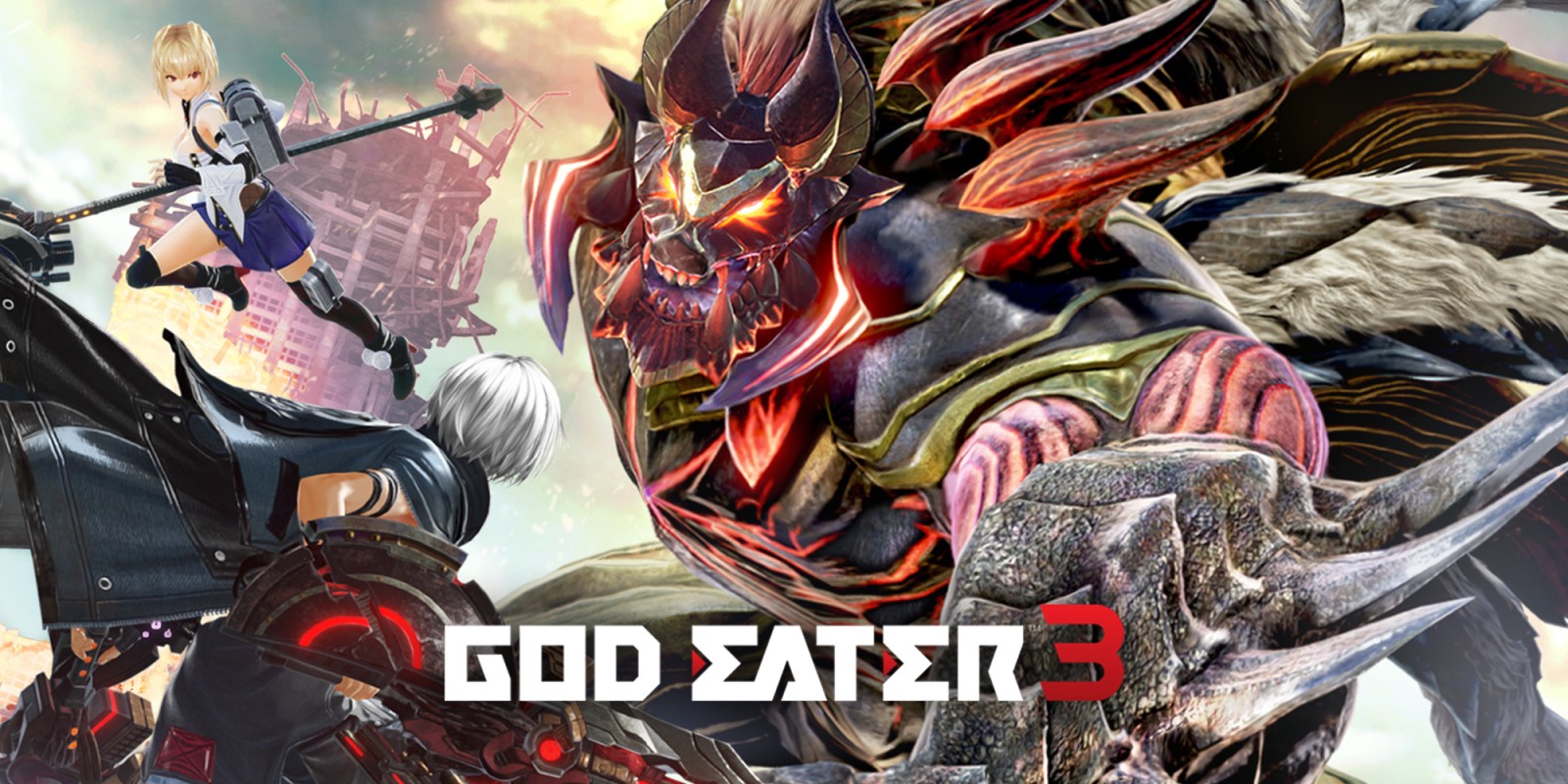 Okay, then you’re probably not missing out.

God Eater 3 is an Action-combat Role-Playing Game, where players team with a squad of 2-8 artificial or online players in order to complete timed missions. The time limit is mostly there to add a sense of urgency to the affair, as well as act as an indicator of how well-equipped you are to handle the task. In other words… it’s Monster Hunter. But not in a bad way- the gameplay is just as engaging and just as nuanced as Capcom’s own series, though some of its quirks are a hefty commitment.

Character builds are extremely varied, but they all boil down to the first and most crucial choice- weaponry. Your combat style will revolve a great deal around which melee and ranged weapons you choose to combine, though there are some traditional RPG archetypes to be found. The spear, for example, does allow the player to utilize a dragoon-like leap ability, and you can charge your greatsword to your heart’s content. The newer weapons, like the dual blades and heavy moon, have unique gimmick mechanics that add to their utility somewhat, which is more rewarding for a player interested in skill customization and loadout. You’ll also need to pick a ranged weapon type, which can fire bullets based on the player’s CP meter, a gauge that refills when connecting melee attacks. The bullet system for the game is immensely complex and rewarding, but it will take either a seasoned Bowgun master or a keen mind to be able to jump into its quirks early on. 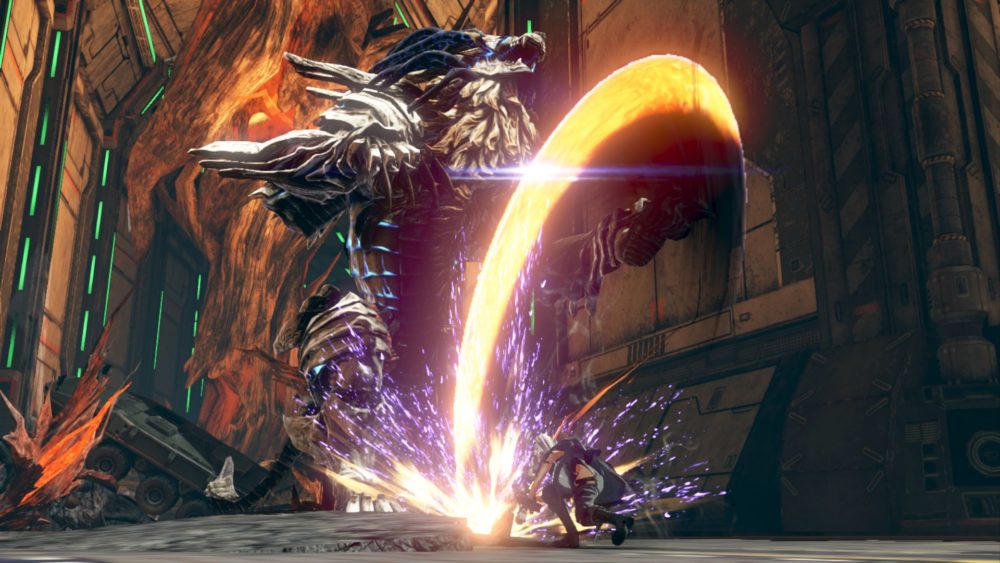 Unlike Monster Hunter, players won’t be engaging in old missions to grind for equipment materials, but rather for weapon skills. These skills can change the way your weaponry functions in battle, and what sorts of opportunities you can take advantage of. Skills have a chance of awakening to a higher level, and doing so will unlock the prerequisite qualifications for new skills on a tree. The way you raise the awakening rate of a skill, however, is by using it continuously during battle, which essentially means spamming it at every possible opportunity. Since these skills often require their own conditions to execute in battle and can be highly circumstantial… you’ll be grinding them a bit. Nothing too unusual for a ARPG of this sort, but it’s still a bit of a slog.

You’ll use materials and resources to craft and upgrade your God Arcs, instead. These are weapons that can shift into a melee, ranged, and shield form, and also eat gods. Yes, I’m sure you thought the title was just nonsensical absurdity, but the joke’s on you- God Eater actually means something. Devouring the Aragami you’ll be fighting is actually a key mechanic towards increasing your attack power, activating acceleration triggers, and utilizing all of your skills, so combat is almost always geared towards gaining and keeping the energy accrued from this action. In this sense, God Eater tends to be a bit more wild and frenetic in comparison with other games in its genre, less about setting traps and more about finding the right time to absorb cells from Aragami in order to maximize your skill awakening and damage output. The game also features a wild dive mechanic that allows you to close space quickly, so almost all of the time spent in missions feels action packed. In short, God Eater is wacky and fast-paced, and if you are looking for a bit more of an apocalyptic, anime-inspired hunting experience, you’ll most certainly find that here in spades.

Speaking of apocalyptic, that’s probably the best way to describe the Ashlands of God Eater 3. The world has been infected with toxic Ash that only God Eaters- wielders of the God Arcs- seem able to traverse. They are a resource in low reserve, however, so some struggling colonies have taken to forcefully creating Artificial God Eaters and enslaving them to do their bidding. Though they can survive for some time in the Ashlands, there are harsher storms, Aragami, and other threats that can end up consuming a God Eater, so it’s a pretty bleak situation, all around. If they choose to go rogue and ignore orders, their identity might be wiped from the register, a fate similar to death. Yet, the player character and their ragtag group of misfits are out to make a name for themselves, either by fighting or escaping the world that is conquered by Ash. Their plucky attitudes counterbalance the morose overtones of the narrative, though it often gets a bit too silly at times to take seriously, especially when the plot twist character shows up and treats the player character like a parent. There’s still plenty of politics and intrigue to be had throughout the narrative, with an over-abundance of text that may feel rewarding to those who enjoy a story in their ARPG. For the most part, however, these cinematics feel like cool, but meaningless fluff to pad a game that already has a substantial amount of actual content. It would be forgivable if the writing and story were focused on more mature character depictions, higher stakes, and desperation, instead of the basic anime tropes and over-worded and serious information dumps. 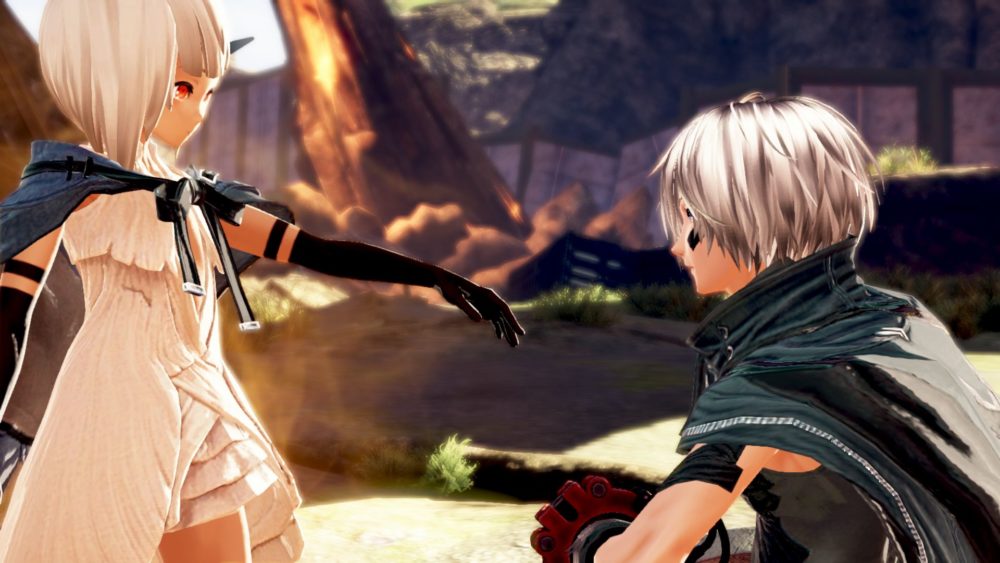 It’s a bit hard to get behind a game depicting apocalyptic wastelands and misery when the character designs sway so hard in the other direction. There are a number of dark-colored outfits in the game, with a splash of color being a rare find. All of these outfits are a bit too impractical to take seriously as survival gear, with the exception of some of the playable character’s gear. Things get straight-up ridiculous, however, as one of the leading ladies- a woman of an esteemed position, mind you- is sporting a cleavage window that dips all the way down the front of her body. If there’s one thing I can commend God Eater for, it is its outlandishness.

Unfortunately, the warped, melting cityscapes and shattered pavement of God Eater’s world blend just a little too well with a number of its character and Aragami designs, some of which possess striking and bold colors, but are often too busy to make out details- or animations. Because of the game’s hectic pace, it can be difficult to read enemy animations in the same way that one might discern the lumbering dinosaur designs of Monster Hunter. Though early previews of God Eater 3 showed a bit more of an impressive lighting engine, the game itself is a bit dull on the eyes, feeling washed out and sterile, even with its brilliant energy effects and pulsating monsters and weapons. The game can be striking, especially when a series of animations works out perfectly, but it’s all so terribly over-designed that it often demands your attention for the wrong reasons.

At least the music is nice.

With a fairly nice twist on the more familiar mechanics, an actual story with a surprising amount of depth (at least, in terms of world-building), and a staggering eight-player online party limit, one might expect to get just as much mileage out of this title as… well, you know, the other big name monster-crushing ARPG on the market. However, God Eater 3’s playtime is actually fairly brief in comparison, with a twenty-something hour story mode, and an overall playtime that’s about twice as long. While this does mean the game is less exhaustive, it might also prove a bit dissatisfying to those who grind gear hard in dinosaur-slaying titles. In the same vein, however, a newcomer to the specific brand of ARPG might end up enjoying God Eater a bit more because of its accessibility in art style and play length.

This isn’t to say that God Eater is all that accessible, though. It throws every weapon type, bullet customization, and a number of techniques and terms at the player in a very brief introduction. While the game’s early missions are simply designed to teach basic controls, there are plenty of hidden tutorials you’ll need to access in order to maximize a weapon’s utility, and more importantly, make the action fun for yourself. Yes, you will gain the ability to do double jumps, aerial combos, dodge-attacks, CP-based skills, and many more abilities over the course of your God Eater playthrough, the game’s committal animations are flashy in a way dissimilar to another big-beast-killing game, which amps tension based on the weight of attacks, rather than the amount of particle effects they fill the screen with. 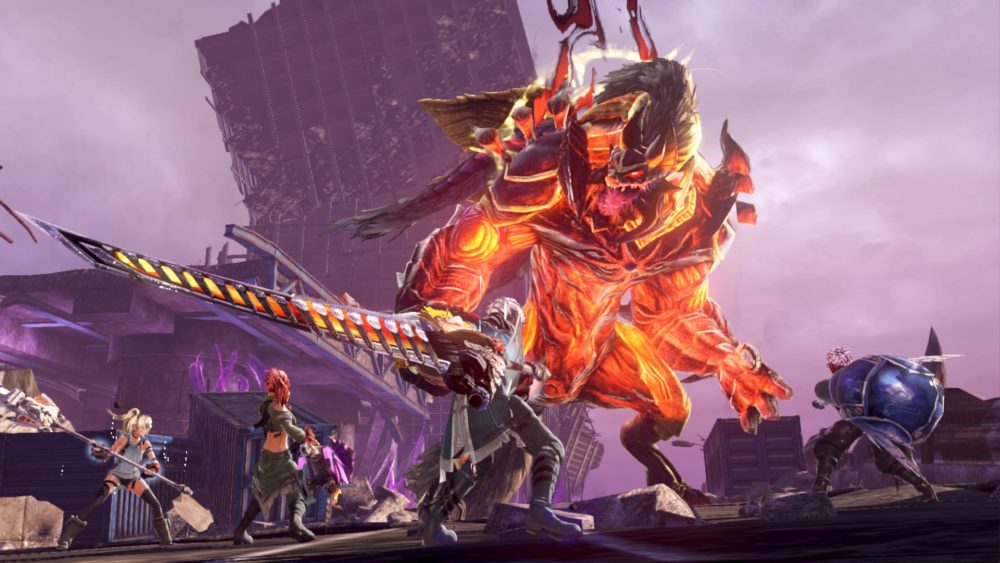 Still, there is plenty of cool stuff here. Player character creation is in-depth, and develops further as you progress deeper into the game. Aragami themselves can devour characters and boost their own abilities, gaining new moves and dealing more damage. Did I mention the eight-player online battles?! That’s twice as crazy as men-who-kill-monsters. There’s a great deal of fun to be had with God Eater 3, but it comes with a great deal of caveats: either you need to have done this sort of thing before, or be very, very willing to give it a try. Otherwise, it’s a mishmash of design sensibilities that, while charming and unique in their own way, still come off as a pale imitation in comparison with the true monster on the block.