Another day, another old mobile title surfacing on the Nintendo Switch eShop – but is that a bad thing? We, as in console enthusiasts, sometimes have a tendency to immediately reject any game that so much as farts in the general direction of anything mobile, but it is a stigma we should abandon. My issue has always come down to the touch screen controls rather than the games themselves, and that applies to today’s review for Goblin Sword.

Released on mobile back in 2014, it was one of many ill-fated phone purchases that I thought “looked cool” but would ultimately be abandoned shortly after I was reminded, again, at just how much I hate touch controls with any action-oriented game. But Goblin Sword comes to Switch on February 16th, and I can play it on my Pro Controller. Wicked. While not mind-blowing in any way, Goblin Sword is as good as a budget-tiered Metroidvania can get – and the light RPG elements certainly help broaden its appeal. 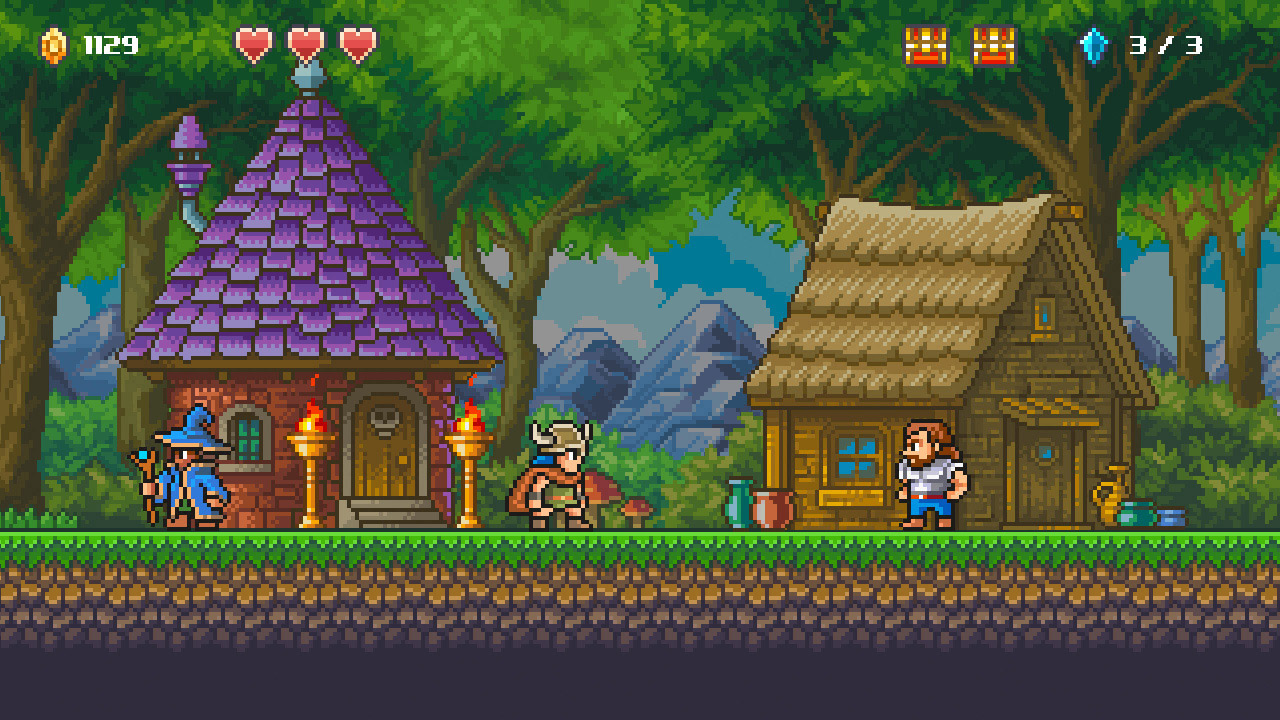 So, there is this sword, and a Wizard wants to use it for bad things. And you – the adventurer – don’t take kindly to this notion. Doing what any adventurer worth their salt would, you set off to thwart their plans. Will you destroy the sword? Keep it? Not enough exposition for you? How about a Minotaur? Skeleton King? Perhaps something bigger, like a house-sized snake, or even a Behemoth? You’ll have to face all of these things, and more – but why? Don’t ask me.

Look, I did the best I could with what is provided here. Simply put, there just isn’t a lot of story content, and while I experienced four to five different endings as I hammered out the game’s dozens of levels, none of them amount to much of anything, and all are a few lines of dialogue at best. Goblin Sword just isn’t the type of game where one can invest themselves into the world and its lore. But that is okay for me at least, seeing as everything else is entertaining enough to distract me. 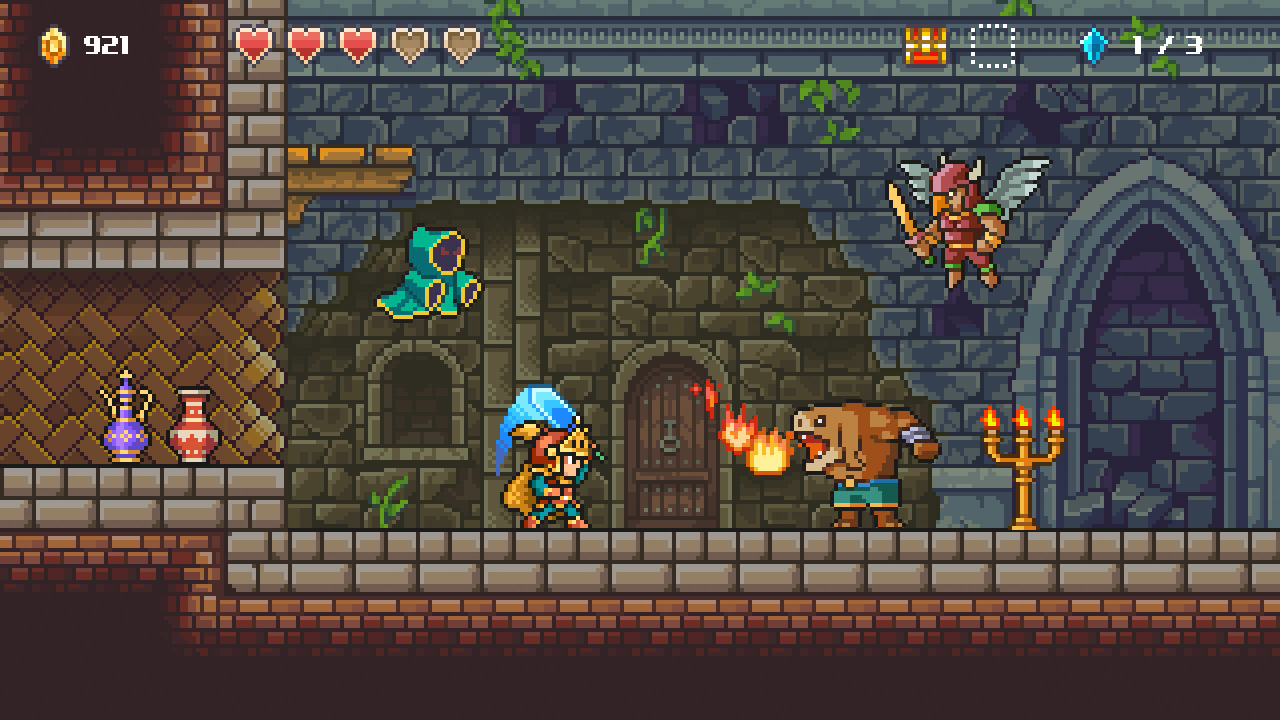 Goblin Sword can be best described as a segmented Metroidvania with light RPG elements, meaning 89 individual stages replace the traditional, singular, sprawling map that often accompanies the subgenre. The player will traverse ancient forests, ruined castles, dank caves, mysterious ruins, and more in their quest to kill (and collect) all the things. Beating a level is as simple as finding the exit, while “completing” a level is another thing entirely – and this is where the Metroidvania aspect kicks in.

Almost every level houses three crystals and two treasure chests. Most of these are hidden – later ones quite cleverly implemented and/or difficult to reach – and some of them all but require certain relics (a form of gear) before they are obtainable. Fortunately, you can go back to any level at any time in order to get things which once were beyond your grasp. Obtain all crystals from a cluster of stages and you’ll unlock an additional level that, supposedly, separates the men from the boys in terms of difficulty. There are five of these secret levels which can be unlocked across the world, providing additional incentives for completionists out there who want to check everything off their list. 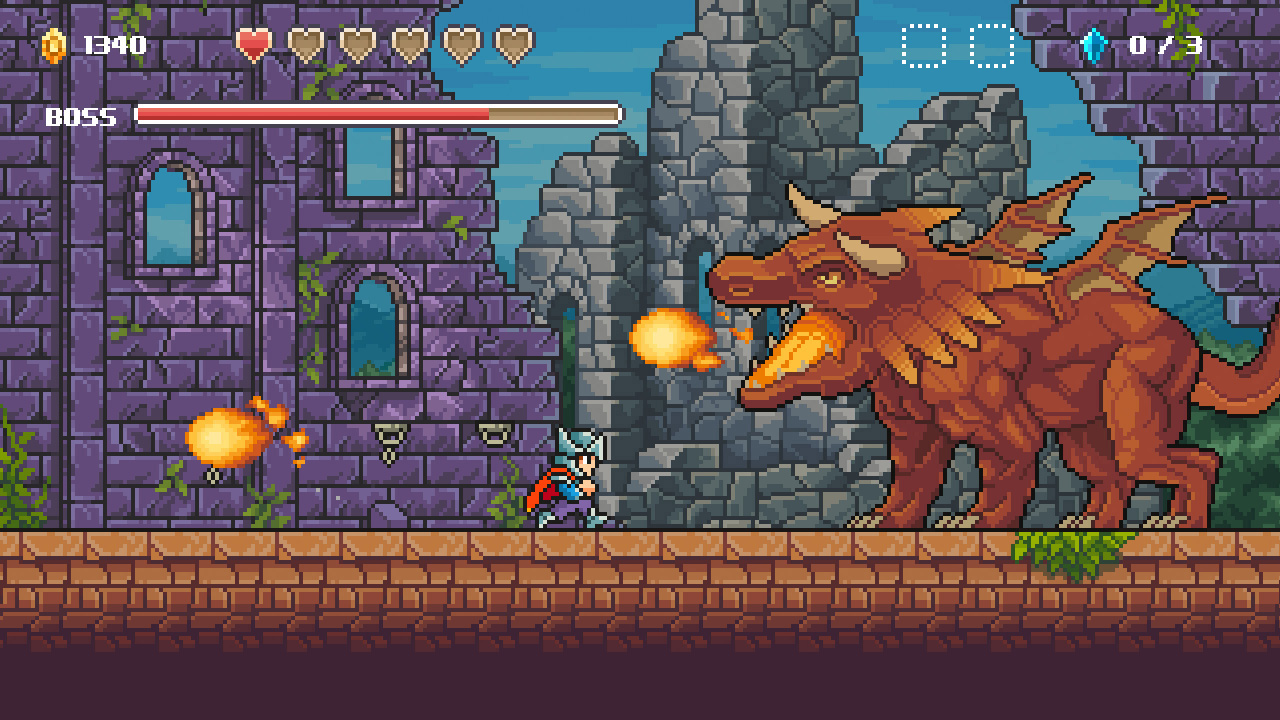 Treasures, though not mandatory, are extremely useful, as they often contain goodies that cannot be found elsewhere. Your life bar is one of many things tied to the treasure hunt, which will be permanently upgraded after finding a certain amount of life potions. Unique weapons, armor, relics, and money hoards await those who comb each area extensively. On the topic of gear, weapons come attached with varying degrees of potency in regards to melee power, speed, and range, up to a maximum level of three for each stat.

There is a great deal of overlap between weapons from a raw statistic standpoint, but most of these can vary in their ultimate attack – something that is automatically activated for a few swings after claiming a power/mana orb on any map. These are often overpowered and immensely satisfying to use – a shame since they are fueled by RNG rather than a finite (but rechargable) resource the player could use as they see fit. Either way, Goblin Sword is one of the easier Metroidvanias out there, so the lack of ultimate attack control is not the end of the world.

Armor is completely cosmetic. Any time you purchase – or find – a set of gear, the merchant in town will allow you to swap between them any time. Relics, however, can change up gameplay pretty substantially. Like the previous gear types, these are found in the field, or purchased by the merchant, and are often key to dealing with certain obstacles. One relic gives you lava immunity, allowing the player to completely ignore such a danger, instead opening up even more opportunities for exploration and treasure hunts. Collectively, the gear system is light by traditional RPG standards, but should be just enough to hook any fan of the genre. 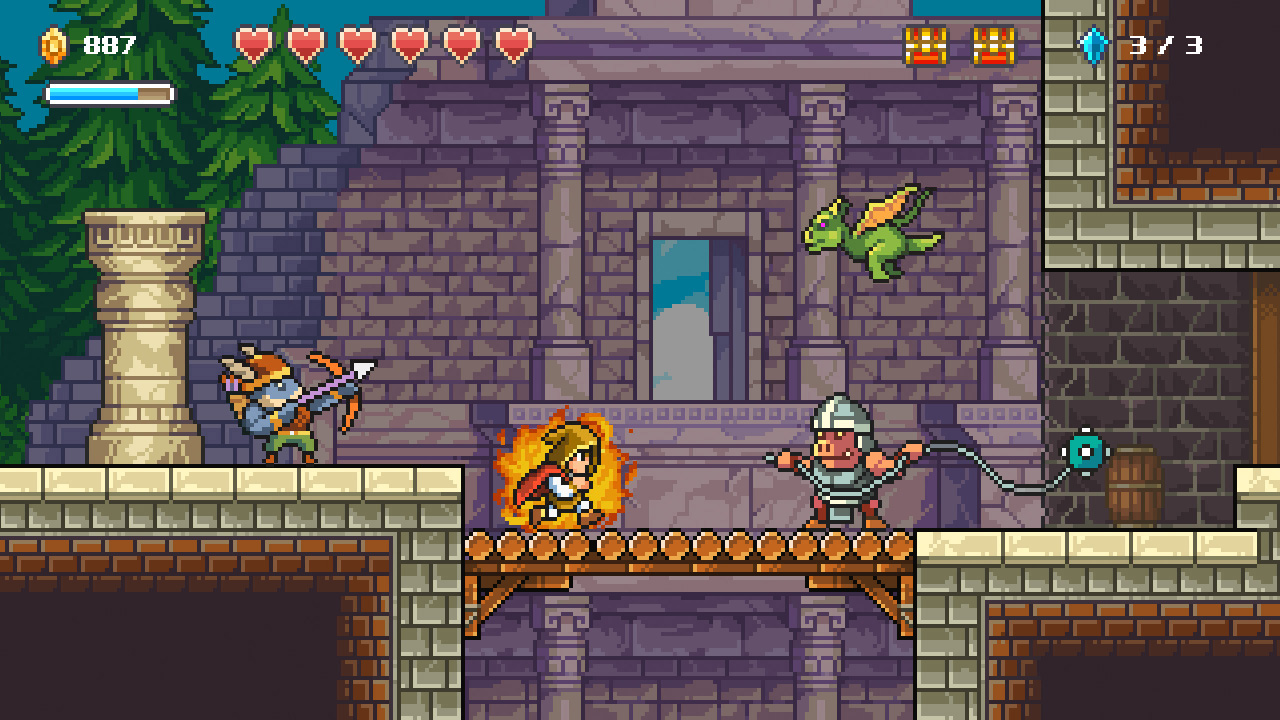 Beyond that, Goblin Sword plays and handles like a traditional Metroidvania/platforming game. Mechanically, the player has few options on the field: a double jump, a sword swing, and perhaps one other active command based on your current relic loadout. Depth of gameplay is a bit shallow, but I’d personally prefer that to unnecessary (or unfun) bloat. Goblin Sword has no shame in being fundamentally basic, which is okay as long as you aren’t looking for a hardcore adventure.

Goblin Sword amplifies the overall experience by featuring some great pixel art. From the base static assets, to the more complex animations and effects – even some nice moments of parallax – everything is presented to the player pleasingly, even though the enemy variation and scenery can get a little redundant at times. There are multiple biomes to explore, and many enemies to vanquish, but both are stretched a bit thin before you receive something “fresh.” 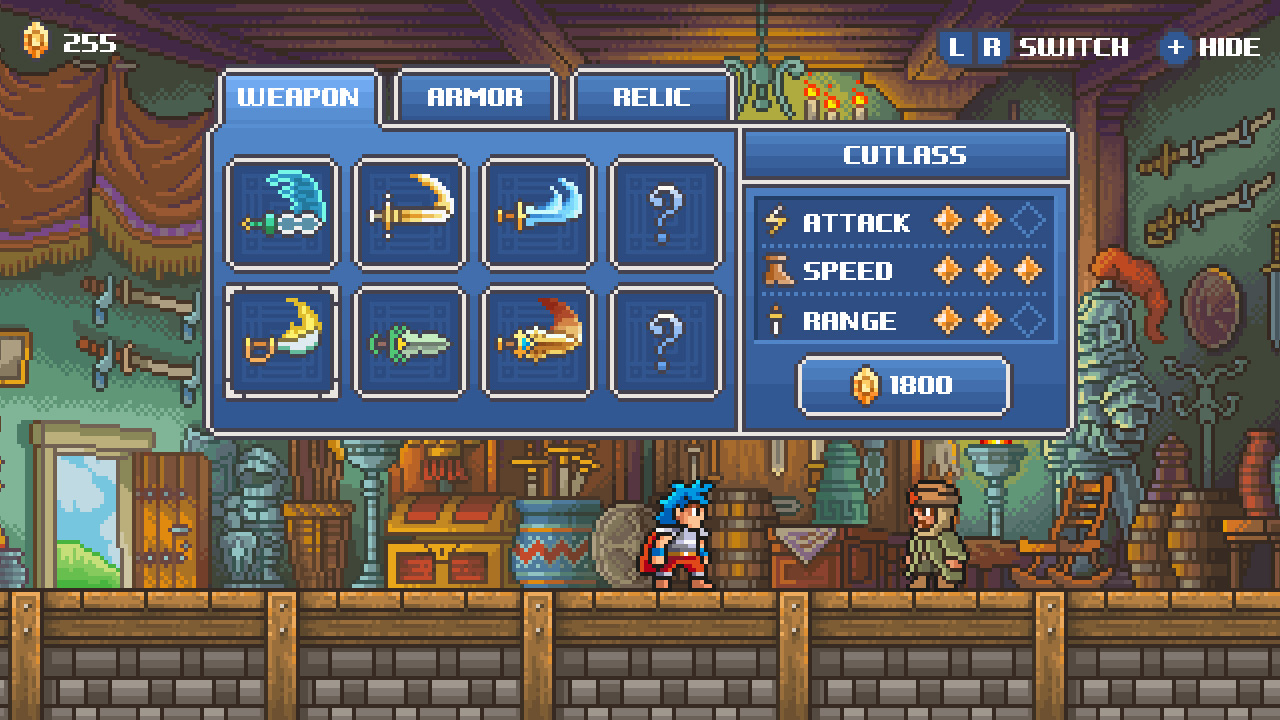 A single cluster of stages can consist of 17 individual stages, and while their layouts may vary drastically, the actual tilesets won’t change until you go to a new cluster. And yes, you will fight three or four different snakes that share pretty much everything except for their hue. Obviously, these “issues” probably stem from the developers being first timers, a small team, and due to budget constraints, but regardless of all of that, the assets that are present are well done, which is all that really matters.

Goblin Sword is exactly why blindly following the “mobile is plague” mantra is a bad idea. Truthfully, what we have here is a decent Metroidvania with light RPG mechanics that, while a bit basic mechanically, is an entertaining romp that doesn’t overstay its welcome. I spent 5-10 hours completing 84 out of 89 levels, beating all of the bosses in the process, and I imagine completionists could easily get another 5 or 10 hours out of it after that. It is one of the easier types of these games you’ll play – perhaps due to its mobile/touch control roots – but it does ramp up a bit towards the end (and those secret levels might be bonkers). Overall, Goblin Sword is well worth the admission price if you’re looking for a shorter, easygoing Metroidvania for your library.