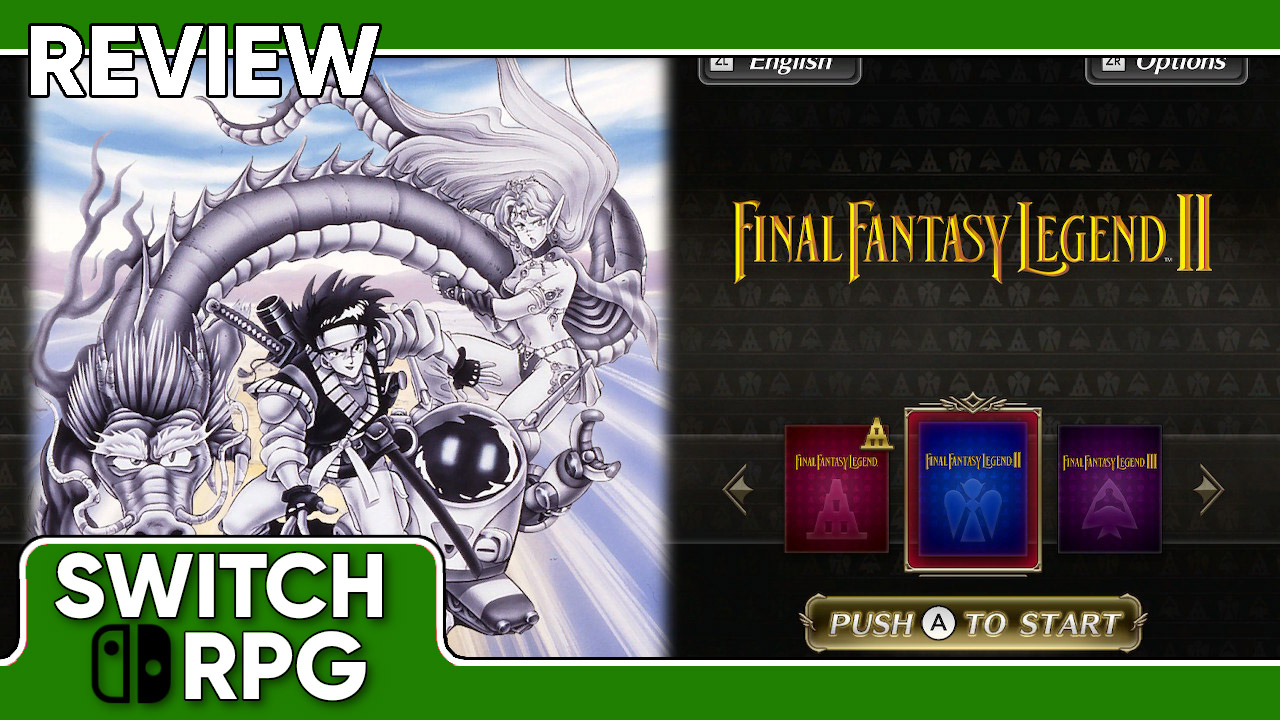 For years, Final Fantasy Legend II has widely been accepted as the pinnacle of the Legend trilogy on Game Boy. It has been considered a massive improvement over the first game, refining on what makes a SaGa game, well, SaGa, before many of the staples would momentarily take a back seat in the third entry. Having been a massive fan of the Legend trilogy ever since my childhood, and especially of the middle release, I’ve been excited about jumping back into this world in the modern era via the 30th anniversary Collection of SaGa. And through this reunion, I’ve discovered that this entry holds up well despite obvious technical limitations. 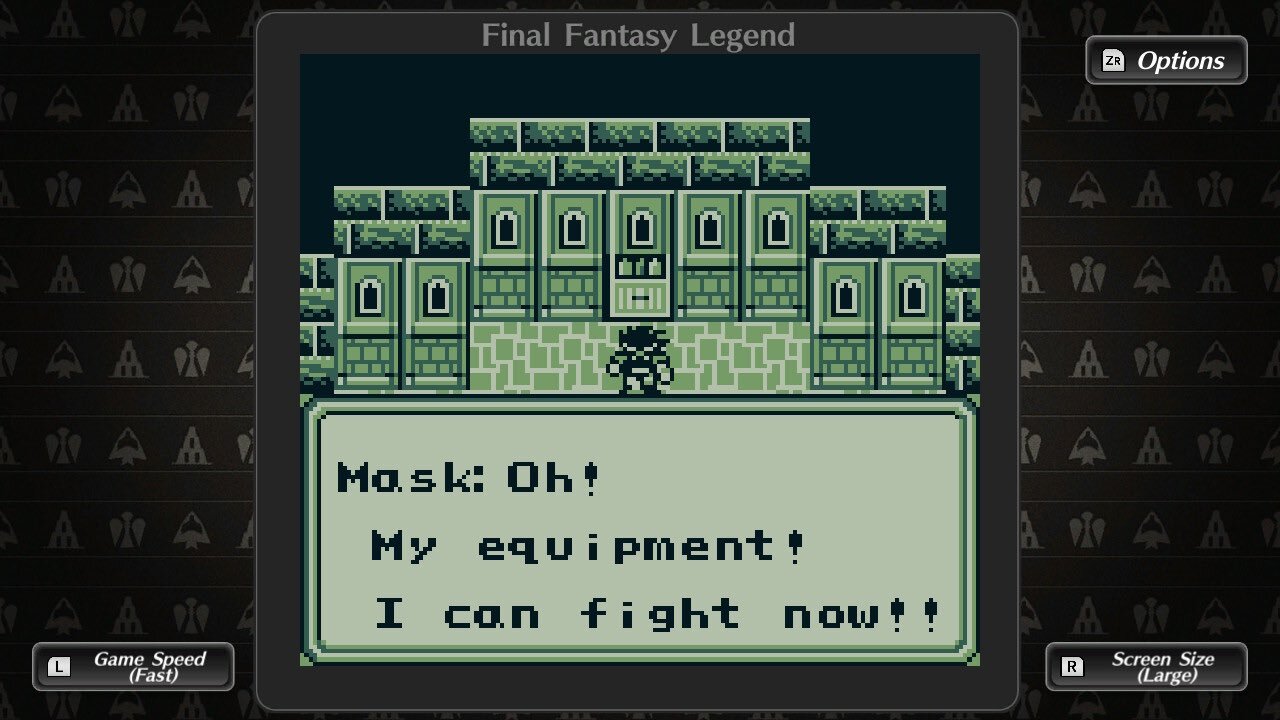 The narrative revolves around MAGI, powerful remnants of ancient gods which are scattered about the world. It is said that those that accumulate MAGI en masse can even become gods themselves, resulting in an ever-constant battle between those that would use them for good, and those that would for evil. The main character’s Dad is an example of the former – an elusive man that has a knack for escaping out of windows and donning attire not at all similar to Indiana Jones. Like any hero, Dad says goodbye to the player character before exiting stage window left, never to be seen or heard from again.

Years later, the player character is on the cusp of adulthood and cannot escape the feeling that their dad is somewhere out in the world. Kissing mom goodbye, gathering up three companions at school, and under the temporary supervision of their teacher, Mr. S, the team sets out on a journey to collect MAGI. This goal will not only keep the artifacts from falling into the wrong hands, but also undoubtedly lead them to Dad – should he still be alive.

As will be a recurring theme, Final Fantasy Legend II features far more story content than its predecessor. The opening starts with a strong purpose, and while there isn’t much party development along the way, certain members will chime in from time to time with their thoughts on the current situations and happenings. The initial player character has the most “development,” but it is more along the lines of his or her reactions to certain events and discoveries rather than adding complexity to the character itself. Mr. S acts as the initial guest party member, but many others will come and go, temporarily assisting the team along the way. These too are pretty one-dimensional, but that is to be expected from such an old game. Either way, there is an acceptable amount of story content when considering the era-appropriate context, and there are still some surprises to be had along the way. 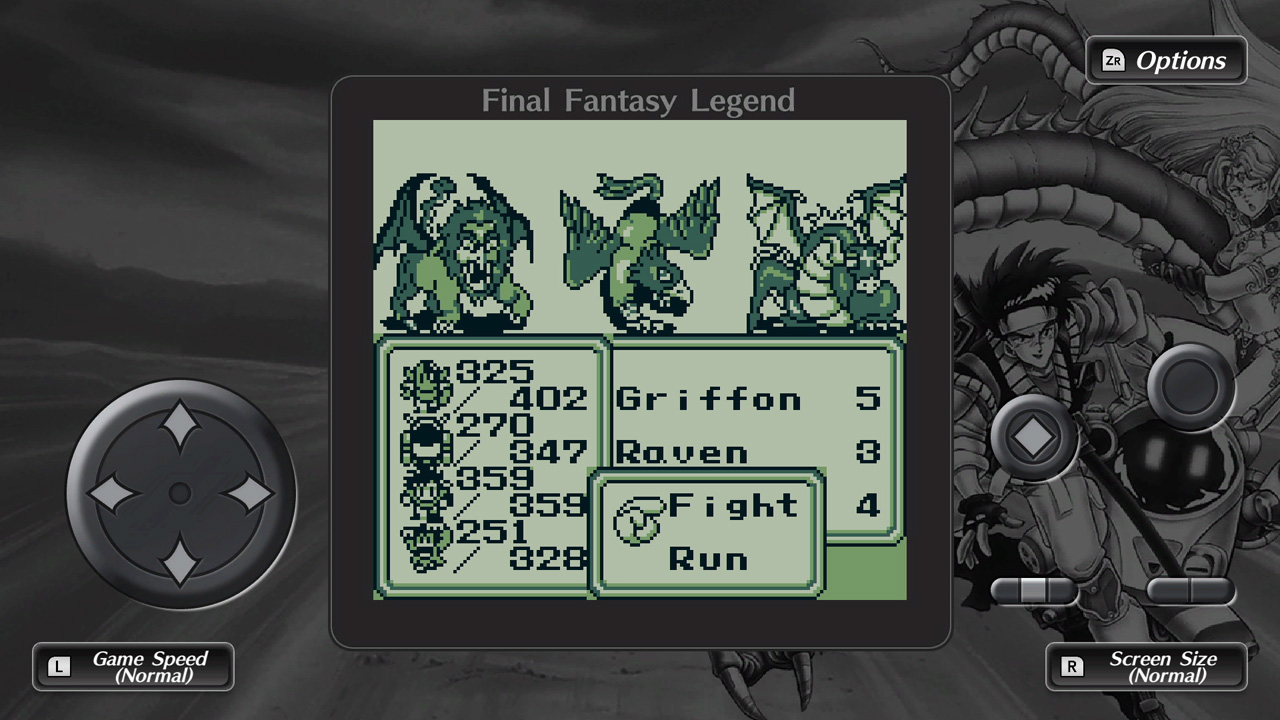 Final Fantasy Legend II is a turn-based JRPG that takes the staple SaGa groundwork laid by the first game and both expands and improves upon it tenfold. The player can make a party of four, with each individual able to be one of the following races: Human, Mutant, Monster, and new for this game, Robot. Compared to Legend I, Humans have dropped the extremely annoying, performancing-enhancing drug route of progression in favor of the now SaGa staple formula – random stat increases based on combat actions.

Mutants, as was the case in the first game, follow suit, also gaining stat increases based on performance, as well as being able to learn up to four abilities through mutation. While this does still make Humans king in terms of carrying capacity, Mutant abilities can be extremely powerful and have the benefit of recharging any time you use an inn. Monsters, like Mutants, work very much the same way they did previously, remaining a deceptively deep evolution system thats innerworkings are beyond the scope of this review. Finally, Robots gain neither stat increases nor abilities randomly, instead improving based on the equipment you gear them up with. They can even equip multiple pieces of the same gear, if you so choose to do so. As a bonus, equipped Robot weaponry will automatically recharge at an inn, like Mutant abilities. Between the four types of characters, there is a lot of variety and customization for building a party that works best for you.

Once you have your team sorted and are officially on the hunt, you’ll soon discover many points of interest scattered about multiple worlds. The general loop here is to gather information from town, investigate places known to house MAGI, then use that MAGI as a key to visit more distant worlds. Like the first game, Final Fantasy Legend II uses a tower known as the Pillar of Sky as a means of traversing between worlds. However, where the first game’s tower was full of monsters and very much a part of the grind, the Pillar of Sky is completely void of random encounters, allowing for an easy transition between different areas.

On the topic of random encounters, they are just as frequent as they were in Legend I but are far, far easier to escape than before. You won’t want to skip many, however, since Final Fantasy Legend II is very much about the grind, but it is nice to know that a reliable escape plan exists when the going gets tough. Fortunately, the barrier to entry overall is far less here than it was in Legend I, beginning very low in terms of difficulty before throwing the player to the wolves towards the end of the adventure. 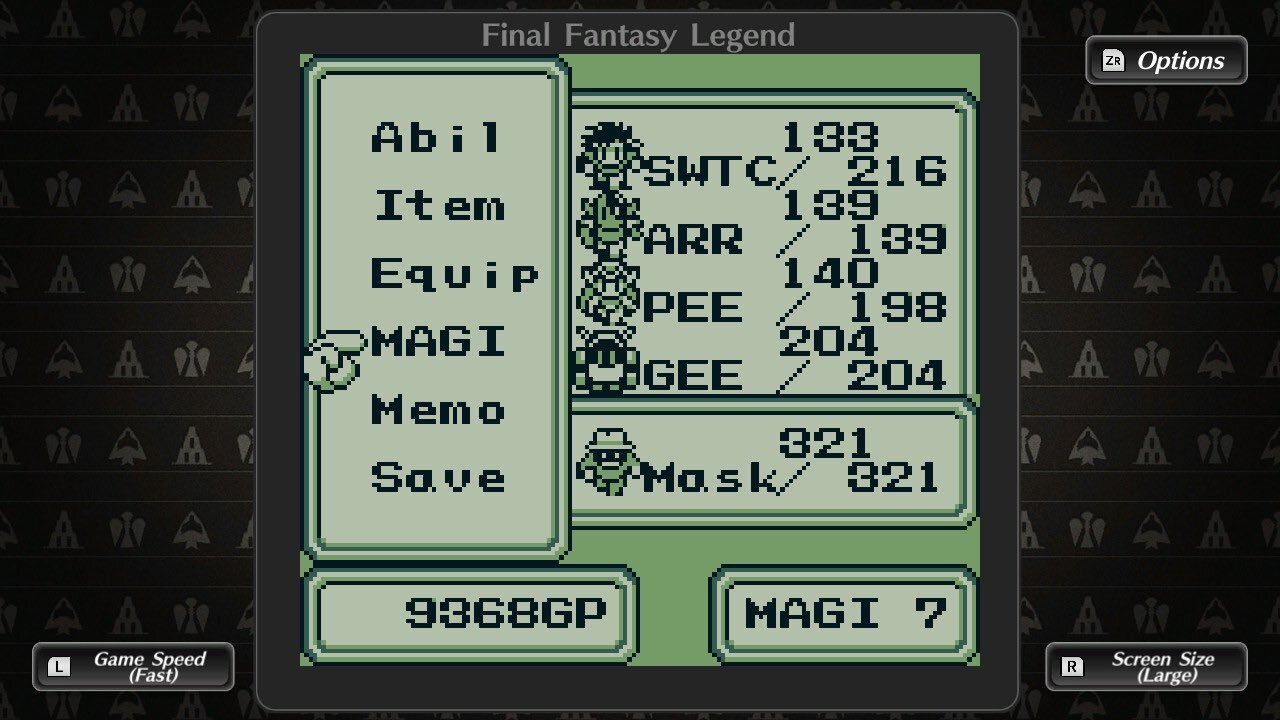 There are still plenty of hurdles to consider even with the more accessible difficulty curve – lack of item, equipment, and mechanic explanations to name a few – but this is nothing that cannot be subverted through first-hand experience or a guide. While the game still doesn’t really explain how character progression works, it does fortunately telegraph stat increases this time around (ie. Player1’s STR increased! ) which will give you an idea of how some of it works in real-time. Although I still would have loved to have seen a digitized version of the original game manual here, it isn’t quite as necessary as it was in Legend I.

Final Fantasy Legend II allows one to save anywhere, and increases the amount of slots available compared to the first entry’s extremely limited single save. Furthermore, players may be able to again challenge a foe that led them to their demise via the services of Odin – a powerful figure in the world that’s only caveat lies in the player’s willingness to challenge him in one-on-one combat once they’ve grown strong enough to. On that note, many mythological gods and goddesses play integral roles in Final Fantasy Legend II, including Odin, Apollo, and Venus.

Overall, Final Fantasy Legend II manages to spice things up drastically compared to the first game, providing a similar gameplay loop with better telegraphed systems, additional variety in customization, and some semblance of a progressive narrative along the way.

Final Fantasy Legend II may have only been released a year after Legend I, but it drastically improved on both the graphics and sound across the board. The bestiary has been expanded to include a larger assortment of enemies, though it still very much leverages reused assets along the way. Character and enemy designs are pretty unique, with some of the boss enemies being downright impressive, at times. Even though it’s clear that Dad takes inspiration from a certain iconic treasure hunter, it is nonetheless fitting given the context of the narrative.

Kenji Ito would tag team the score with the returning Nobuo Uematsu here before becoming a staple in the SaGa franchise. These two genius composers combine their efforts into making a soundtrack that is both fitting for the content and most certainly memorable. You’ll be hard pressed to find this soundtrack outside of any Game Boy enthusiasts top five Game Boy soundtracks of all time lists! As a bonus, all Collection of SaGa games feature a built-in speedup function, interchangeable wallpapers, a vertical mode with a virtual pad (akin to playing on original hardware), and two different screen size options. 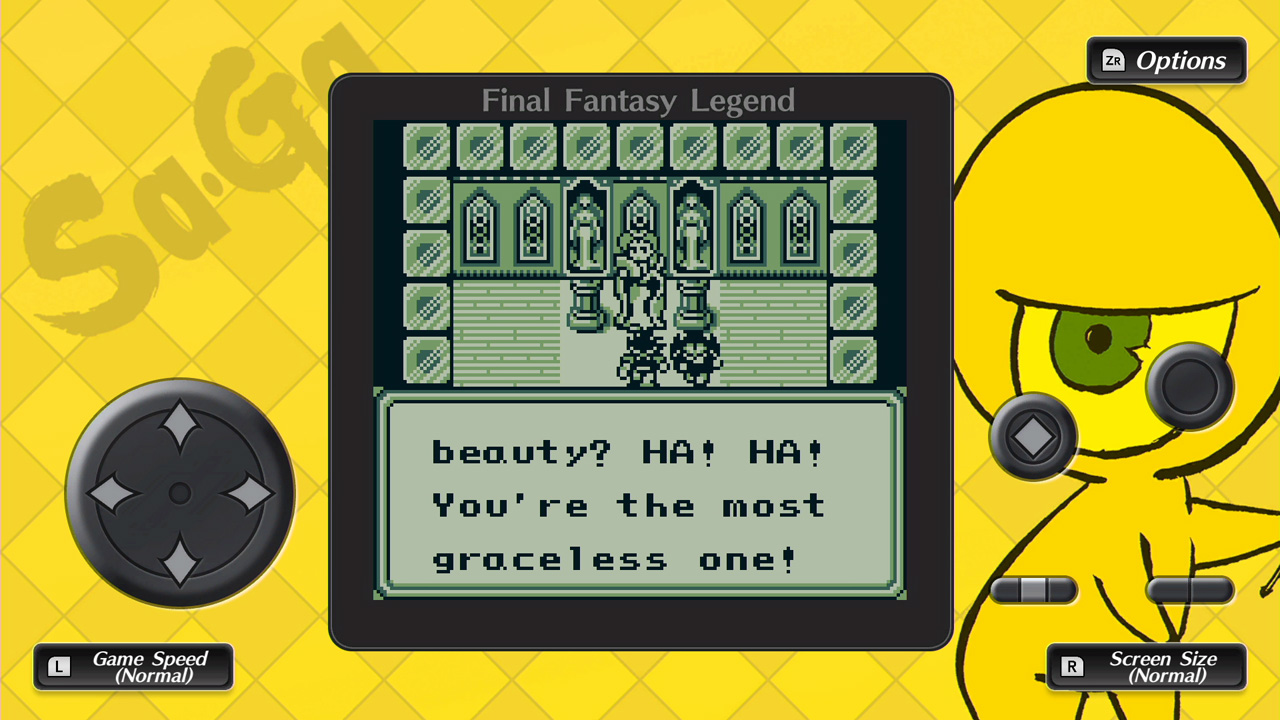 Final Fantasy Legend II is, without question, the king of the SaGa entries on the original Game Boy. While many of its systems were established in the previous game, Legend II really fleshes them out to the point where they can be both accessible (relatively speaking) and engaging. The typical Game Boy trappings will frustrate at times, particularly when weighing purchasing decisions towards the end of the game with limited funds, but there are methods to offset the antiquities should you choose to do so.

The end of the game can be incredibly brutal and punishing, but nothing that a bit of grinding can’t overthrow. After all, what is a SaGa game without many, many grinding sessions? Regardless, Final Fantasy Legend II remains a far more smooth romp than its predecessor, but still not as accessible as the third entry will prove — more on that in the coming weeks!