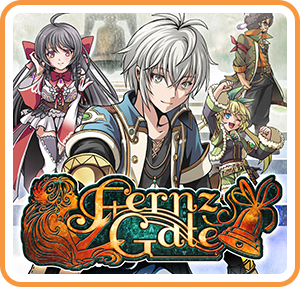 Good role playing games entice its players on many fronts, drawing from a diverse set of interests to create an experience that immerses the player into the game world. A dynamic battle system, with a healthy dose of character customization, pulls in the min-maxing crowd and challenges them to make the most overpowered party they can imagine. Collectible characters and rare items challenge completionists to curate their collections to absolute perfection. And a compelling story can make up for weaknesses in all other fronts, carrying players along a twisting path that delights, surprises, moves, and crescendos in perfect harmony.

Fernz Gate, the latest KEMCO RPG to grace the Switch, accomplishes none of these things.

From a design standpoint, Fernz Gate certainly aspires to the greatness described above. The game features a variety of unique features, interesting twists on classic battle systems, and a cast of quirky characters that could have infused its sometimes unique, sometimes cliche story with real energy. Ultimately, however, Fernz Gate falls flat on pretty much every front, turning a promising set of features into a shallow and boring malaise.

Probably the most obvious fault with Fernz Gate is the least damning element – its visual presentation. The game is ugly, no two ways about it. 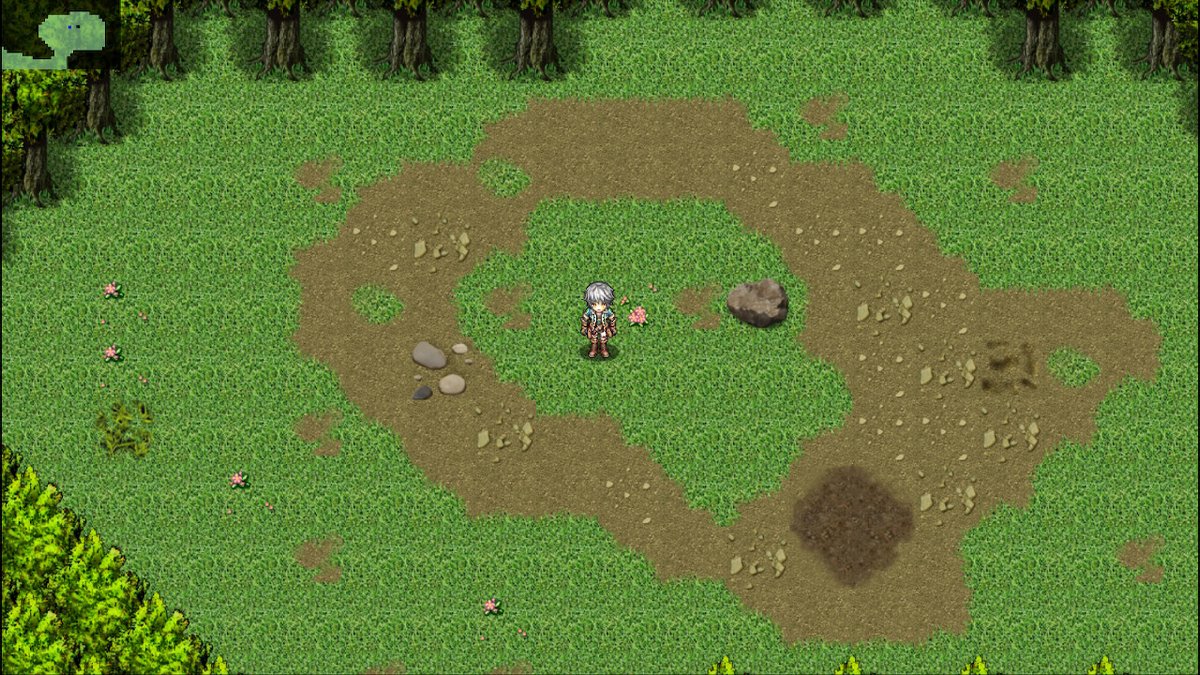 While the character sprites are certainly detailed, most fall directly into either modern (busty, chibi, fantasy elf) or classic (big hat wearing ranger) cliches. At the same time, the characters themselves feel somehow out of the place in the world that surrounds them. Not being a graphic design expert, I cannot directly place blame on any particular aspect of the visuals. But the world and the characters in it just don’t feel like they belong together. This problem is exacerbated by the controls. Players can only move their characters in eight directions across a flat plain, a design choice that feels like a half measure between the 4-directional movement of classic Dragon Quest and Final Fantasy, and the move free moving design of a modern RPG. Even switching from the joystick to the D-pad did little to make the movement feel any less clunky. At the same time, KEMCO’s boilerplate, mobile-sourced menus do nothing to make the player feel at home or immersed in the story.

Perhaps the best thing to be said about the game’s presentation is that the music is catchy and energetic. The game has a fast-paced, rock-inspired soundtrack, and I frequently found myself humming the battle theme between gameplay sessions.

But what about the actual story? After all, some of the ugliest games on the market can still have wonderfully engaging stories, and despite what Square Enix would have us believe, RPG fans expect far less cutting edge graphics technology than fans of other genres.

The world of Fernz Gate exists in a multiverse, where a vast number of realities all coexist, mostly oblivious to each other’s existence. Some of these realities are not unlike our own – perfectly modern and mundane, with cars, skyscrapers, and prep schools. Others are far more extreme, filled with elven forests, powerful mages, and even angels and demons. We say these realms are mostly oblivious to each other’s existence for one reason – every now and then, a person can cross over into another dimension – a single world where everyone speaks the same language, no one needs to eat or drink, and people from all over the multiverse find themselves stuck – if only for a short time.

The peaceful coexistence of both natives to this world and their extra-dimensional visitors is shaken, however, when a great evil just happens to be pulled into their world. Thus begins a massive takeover of this peaceful land, with men, women, children, and even animals being transformed into monsters and fiends. 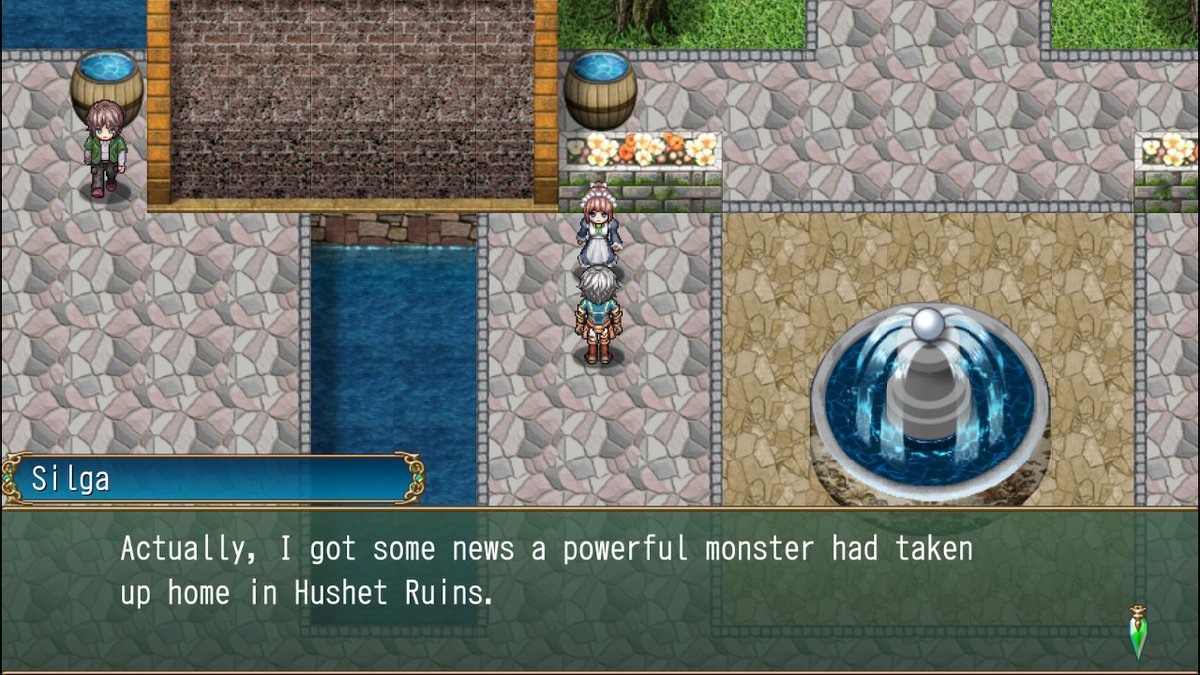 The basic premise of Fernz Gate sounds promising. Adventurers from war-torn world must teach peaceful residents to rise up in a great resistance. But the entire thing falls flat in execution.

Repeatedly throughout the story, you are told about various groups that are working to resist the great evil. The Resistance, who fight against the monsters. The Support Squad, who support the Resistance, by also fighting monsters (but weaker ones, I guess?). A team of magical nurses who somehow coordinate it all. But with one exception, you never actually get a sense that these organizations actually exist. The characters talk about being or becoming members of one group or another. But you never meet their leaders. You never go to their headquarters. You never get any sense of them outside of what you’re told in dialogue. It all feels like a huge missed opportunity.

By far the strongest feature in Fernz Gate is its battle system. From the two RPGs I’ve played from KEMCO, it seems the company is determined to find creative ways to fit more than the standard 3-5 party members into a given battle. In Fernz Gate, their approach is the “buddy system,” where two characters pair up, attacking at the same time, sharing a life bar, and can even engaging in combination attacks if they have the right combination of spells. Players can use both story-based characters and collectible buddies that range from monsters to guest characters from other KEMCO RPGs. The system is both charming and effective, giving combat an extra sense of strategy both in and out of battle. 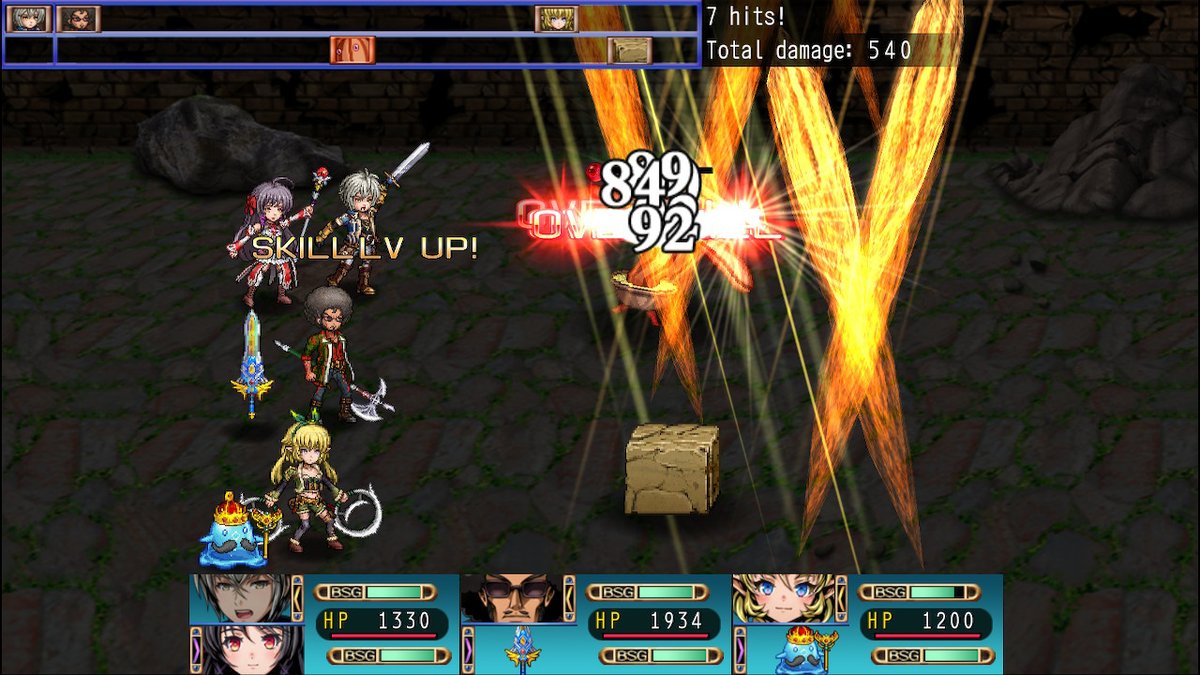 KEMCO also brings two other innovations to Fernz Gate, that at first blush felt like excellent quality of life features, but ultimately spoiled the battle system entirely. First, every character’s health bar refills completely after every battle. This means that as long as you can handle a given dungeon’s set of enemies, you can grind indefinitely without having to return to town – quite a time saver. Second, every dungeon comes with small stations that act as both fast travel points and as places where you can instantly summon a set series of random encounters, one after another. This not only saves time backtracking through dungeons, but also allows the player to quickly grind for as much experience as they want, with no filler in between.

These two features would be gladly welcome, until they’re combined with another common feature in KEMCO titles – autobattle. With the click of a button, players can speed through every random encounter in the game, secure in the knowledge that their characters will fully heal each time. Combined with the ability to quickly summon hordes of encounters in a row, grinding is not just easy, but completely automated. All the nuance of the buddy system goes out the window as well, as you’ll also ever need to strategize your attacks against bosses. Everything good KEMCO built into the Fernz Gate combat system comes crashing down when you combine all the different innovations together. 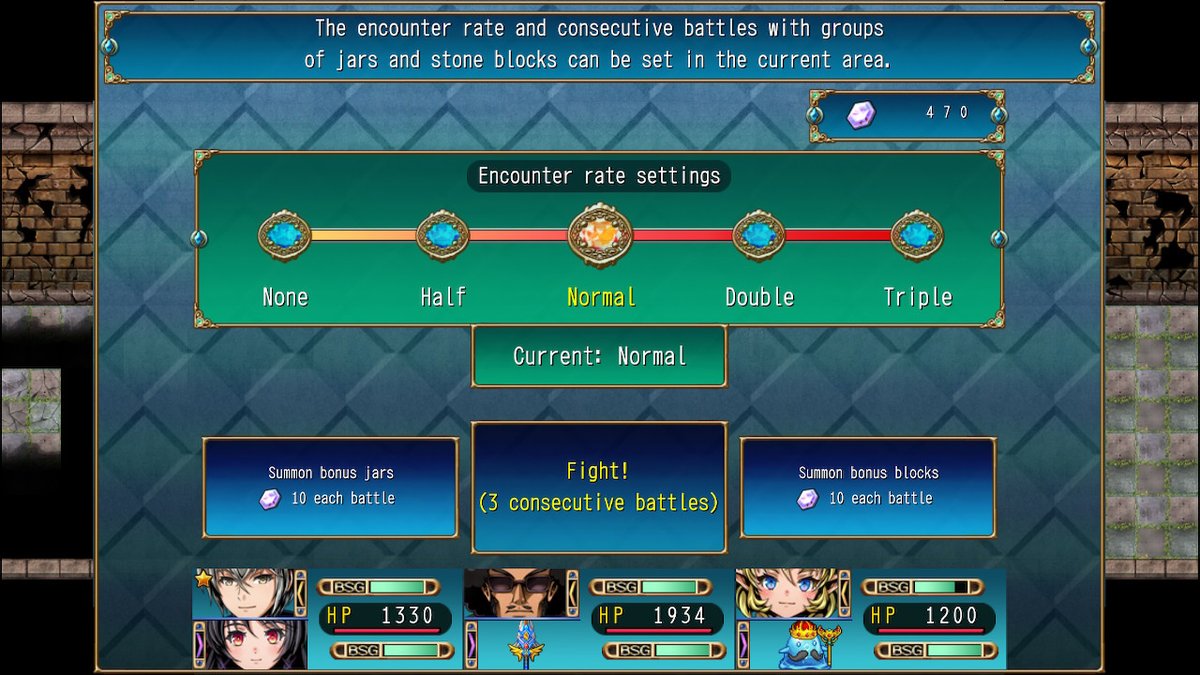 This may be a case of KEMCO’s mobile heritage seeping through again. Certainly this kind of grinding would be welcome to a player who just wants to set their phone facedown on their desk and gain levels while they work. But for a console gamer looking for an engaging RPG experience, an entire feature set now carries no meaning.

Innovations pile upon innovations in Fernz Gate, and that goes for out-of-combat as well. Fernz Gate sheds the traditional RPG overworld, and replaces it with a simple, point and click map of dungeons and towns. Again, the goal seems to be to cut down on as much filler as possible, but ultimately it leaves the world feeling even more empty. Most dungeon maps follow a standard formula of branching hallways, with a few hidden pathways that the game spells out for you – leaving little in the way of creative exploration. 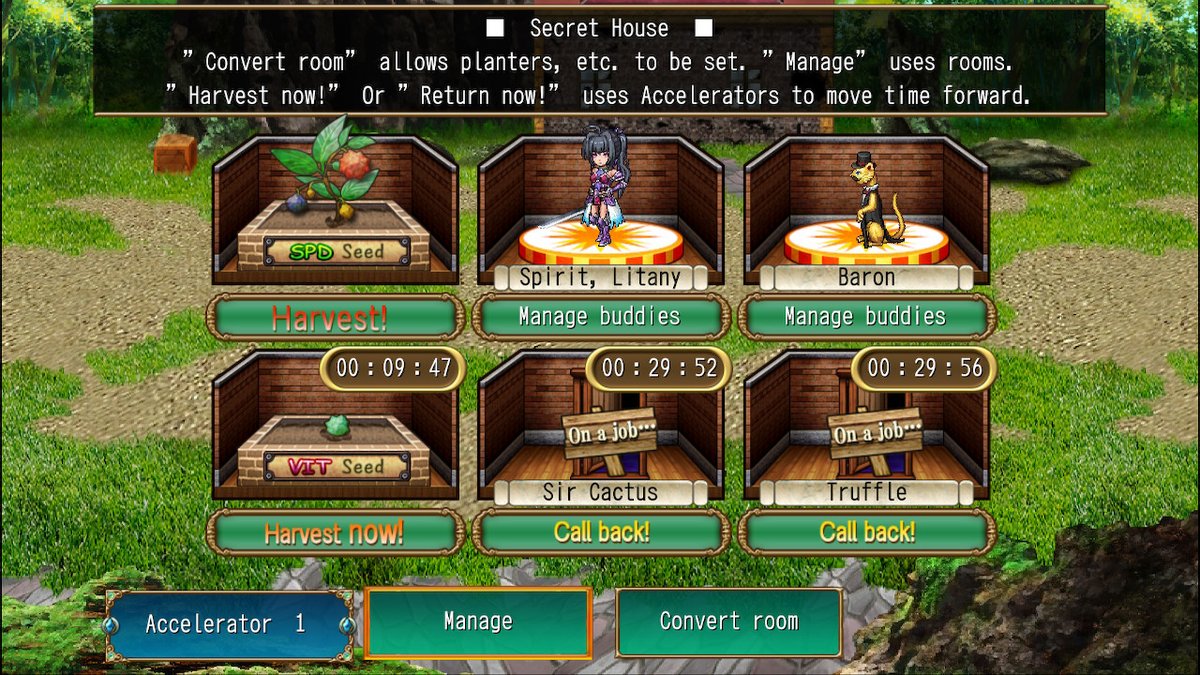 As the game rips flesh from bone on exploration and combat, it fills in the gaps with a myriad of bonus features and associated tutorials that continue to come hours into the game. Players can plant stat boosting seeds to produce better stat boosting fruit. They can send buddies out on missions to gain rewards. And of course, KEMCO’s usual lottery system for bonus items and rare buddies comes along for the ride – another vestigial organ carried over from their mobile roots.

Perhaps the best example of wasted potential, however, are the character-specific talents. Like Octopath Traveler, each of your main party members have special talents they can use in the overworld. One character picks locks, another can use their natural agility to jump across precarious pathways, and still another can send their pet ferret down into tight passageways (really). This system could easily have been built similar to that found in Octopath Traveler, adding new ways to explore the world, interact with townsfolk, and enhance the game immersion. Unfortunately, these skills are relegated almost entirely to the old cliche “press the action button and get a moderate item reward.” 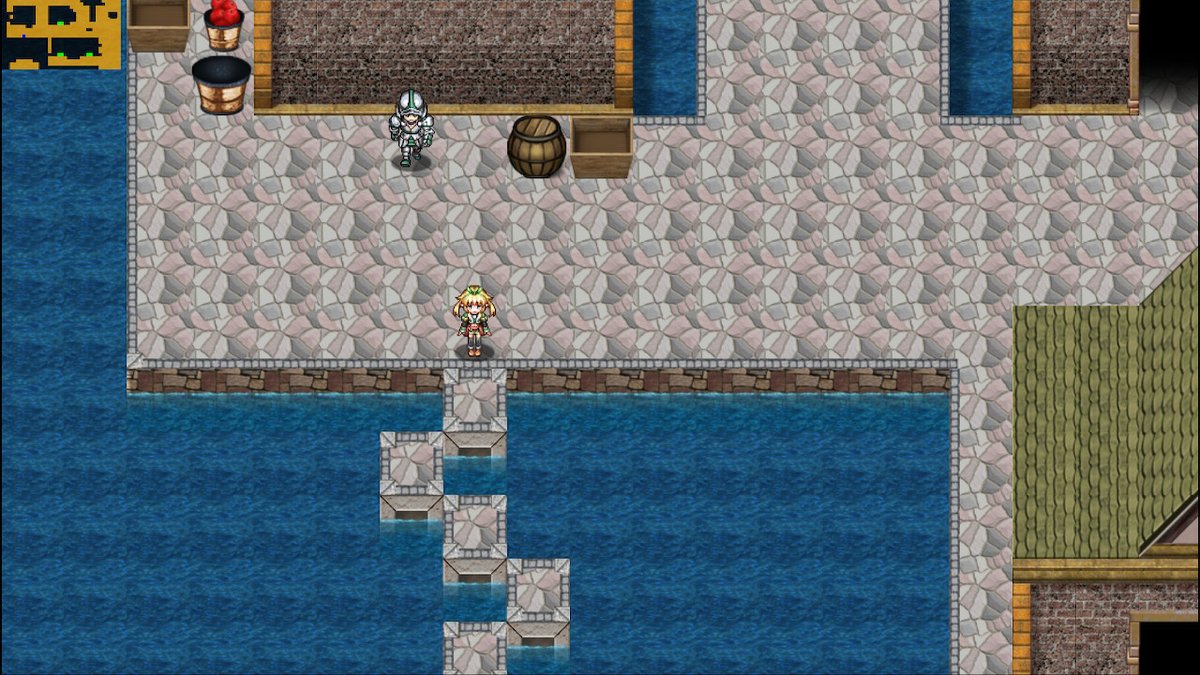 On top of all that, leveling up these skills is accomplished during “down time” you have in towns after resting at the inn. By speaking to various members of your party who have scattered around town, you can improve their skills and allow them to pick more difficult locks, jump farther over gaps, etc. It seems simple enough, until you realize that these improvements are locked behind one shot conversations where, if you choose the wrong dialogue option, you miss your chance to level the skill entirely.

Fernz Gate is, unfortunately, a hot mess of a title that lacks the focus and execution possessed by many of its forebears. It’s a game that opens with promise, but squanders every original idea on the altar of expediency.