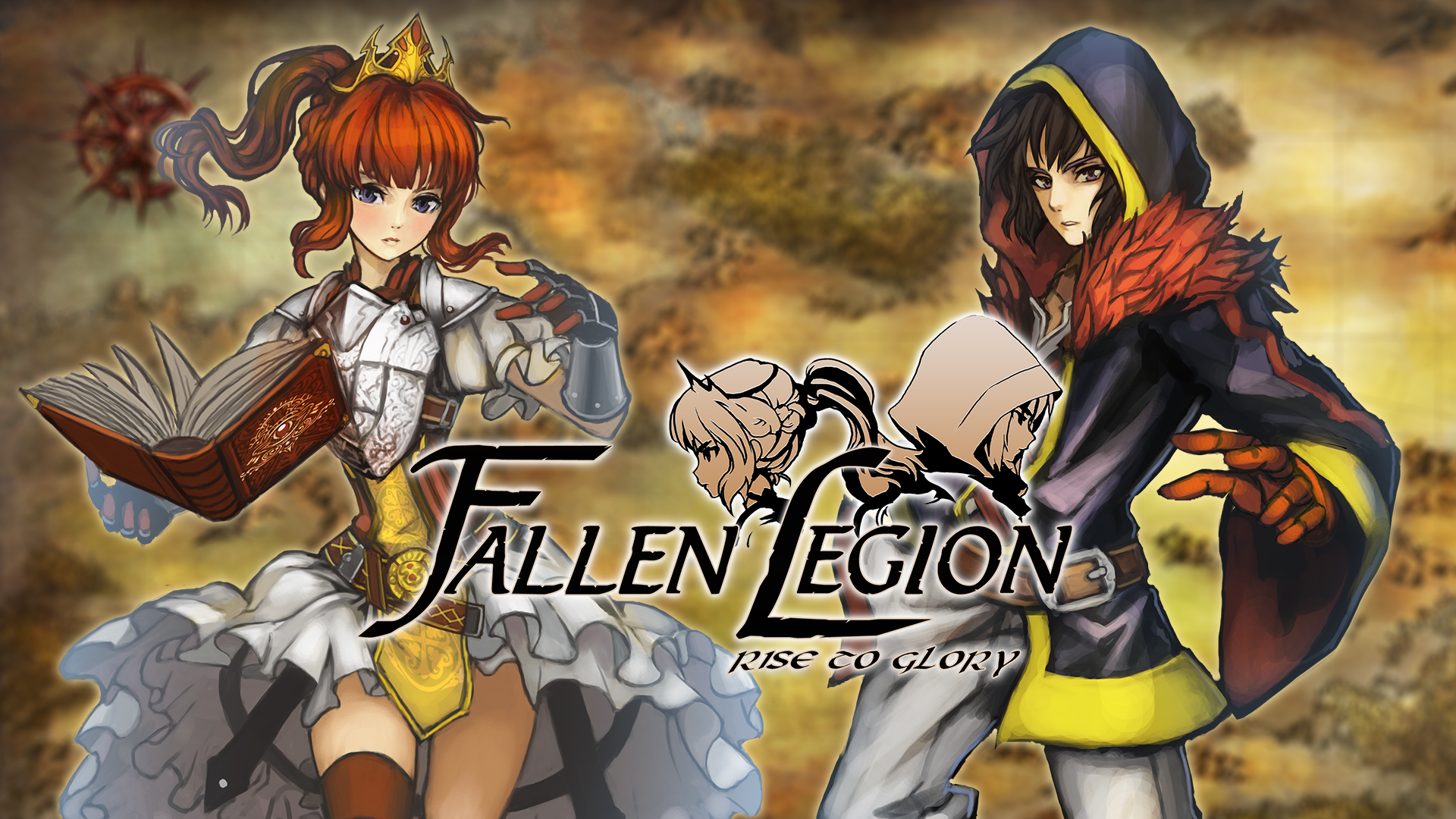 In the realm of Role-playing games, there are three philosophies that most developers tend to adhere towards regarding combat systems.

Sometimes, the games that fall into this third camp can be delightfully weird and fun. The Role-playing genre is sometimes a bit too reliable, and even changes like Final Fantasy XV’s action-based combat can feel like a breath of fresh air. However, games that take a risk with their combat need to ensure that the experience they present avoids tediousness- just because you have a unique idea, doesn’t always mean it is a great one.

Which brings us to Fallen Legion: Rise to Glory. This NIS-published RPG takes some bold steps in terms of presenting a fully-fleshed out world and a unique combat system, but are these elements enough to make for an enjoyable experience?

Fallen Legion markets itself as two separate sides of a narrative, which is the result of both previous Fallen Legion titles, Sins of an Empire and Flames of Rebellion, being combined into one. The two main characters, Legatus and Cecille, are bent on ruling the Fenumian Empire for their respective reasons, and as long as you pay attention to the cutscene material, you’re likely to grasp their motivations and character. Legatus and Cecille have clearly-defined qualities and their own supporting casts, ranging from a sassy book to a glowing squire. In terms of narrative arcs, I personally found Cecille to be the more compelling of the two, but it largely comes down to taste. Though both narratives pit the opposing sides against one another, a New Game+ option allows for an alternate ending. Despite its clashing protagonists, the truth is that both are relatively decent people, and their conflicts result from ignorance. The narrative’s twists and turns are telegraphed and rarely surprising, which is why paying attention to the main narrative cutscenes alone will likely leave you feeling unfulfilled.

This is a bit of a difficult transition to make, as this review will now shift into gameplay elements; however, it is important to understand the true crux of Fallen Legion’s narrative. Another major aspect of the title is its real-time decision-making gameplay, which is just about as thrilling as it sounds in execution. Making choices during battle stages (represented by three choice cards that can be selected with a single button press) will have consequences that will reverberate down the line. These decisions are timed, but each scenario will usually have an aggressive, submissive, and manipulative choice card. The results of these choices range from the acquisition of certain spells and tributes to morale levels to access of certain levels in the game.

However, during a first playthrough, there is little way to truly tell what sort of consequence will occur, which can make each selection feel like a shot in the dark. Likewise, these choices feature characters, locations, and scenarios that require some heavy subtext, and if you don’t pay attention to (or read up on) the game’s extensive lore, you might miss out on some key details that may affect your decisions. The game does have a glossary of terms and often doles out character and location profiles before the start of a stage, but they are numerous and overly-wordy. Still, when this decision-making gameplay does work, it feels extremely satisfying. I can distinctly recall reaching a town, which are auto-scrolling segments where the protagonist listens or participates in a conversation with the townspeople, and hearing about a woman whose husband was killed thanks to the lack of nearby defenses. In a later stage, I was given the opportunity to decide to station my troops in the area, and unlocked a stage where I could give the intruding enemy their comeuppance. Afterwards, my clout in the town increased, and I earned the widow’s begrudging respect. These moments are fantastic but few and far between due to the nebulous nature of some decisions.

Decision-making isn’t the only action that takes place during Fallen Legion’s auto-scrolling combat stages. The bulk of gameplay is dedicated to its active-selection combat system, where the protagonist and their three summoned Exemplars (manifestations of legendary warriors- the source of the game’s title) take on waves of enemies in different formations. A single press of an Exemplar’s assigned face button causes them to spend a single Action Point in order to execute an attack. Exemplars have a maximum of three Action Points, which recharge based on their speed stat and defensive options, but spending their Action Points in quick succession can create an individual combo as well as help to fill up the combo bar at the bottom of the screen, which will grant an Exemplar a deathblow should they be the last character to execute an attack as the bar becomes full. Meanwhile, the protagonist stands behind their Exemplars in a support role, casting spells with Magic Points that are accrued by successful Exemplar attacks.

If it sounds like there is a great deal of information and resources being managed during combat, that’s because there is – and these are only the basics. Exemplars can be shifted into certain formations mid-combat and even mid-attack in order to cancel their animations and give them reprieve from enemy attacks, of which there are many. Likewise, hitting the L-Shoulder button causes all three characters to go into a blocking stance, during which they take reduced damage and cannot regain Action Points. Timing a block just as an enemy attacks will cause a Perfect Block, which is the fundamental mechanic of Fallen Legion, as it automatically recharges a single Action Point, reflects certain kinds of damage, and can have many additional effects.

Again, the player must manage all of these different mechanics in real-time, which requires them to be aware of their Magic Points, Action Points, Combo Bar, and each individual enemy’s attack animations, as they emit a signature flash right before their attacks, signaling the moment to Perfect Block. Since Perfect Blocking is an absolutely essential technique in negating damage, reflecting projectiles, and stunning opponents, you need to make sure you are not only aware of which Exemplar the enemy will be targeting, but also the speed of their attack animation. The problem is, enemy characters can actually overlap one another as they approach, making it difficult to see which Exemplar they are targeting, and projectiles move at drastically different speeds, with some simply executing without any sort of telegraphing which would denote a Perfect Block. Exemplars and enemies can move their position on the battlefield, as well, which can result in certain characters vanishing from view, presenting multiple issues in terms of defense. Keep in mind, the other elements that need to be managed during battle are positioned all over the screen in a sloppy example of a user interface.

In other words, combat is messy. Aptly described as hectic by the publisher themselves, that doesn’t begin to describe the feeling of playing Fallen Legion. Often, the player must result to spamming face buttons and block in the hopes that they will be able to kill or block an opponent. The sad thing is, this works fine in the early stages, setting up a dishonest precedent for the later stages, which possess butt-clenchingly frantic levels of pacing.

Atop all of this, the player is ranked at the end of each stage based on their Defense, Offense, Technique, and Combo count, which may or may not grant better rewards. In reality, there are a number of elements the game doesn’t directly tell you and must be sought out in the in-game glossary. For example, making certain decisions and completing stages grant the protagonist tributes, which are buffs to a single or multiple Exemplars – the game’s equivalent of character progression. Likewise, the player is given a gem upon completing a stage that often grants additional passive buffs upon being equipped. The only way to receive these rewards is by playing stages, so should the player reach a point where they can no longer progress, they must grind out stages in order to get the chance at character progression.

Transitioning out of combat, it should be mentioned that there are infrequent moments of slowdown present that can disrupt the pacing of enemy attack animations and cause the player to fail at Perfect Blocks. This is somewhat baffling, considering Fallen Legion is by no means a graphical powerhouse, but perhaps it is the sheer amount of actions and effects taking place simultaneously in its active-combat system that cause such slowdown.

In terms of graphics, Fallen Legion is set on a two-dimensional plane, and its characters are hand-drawn in a very appealing art style. Both of the protagonists and their sidekicks have drastically differing character designs, and while many enemies share certain body types, the art style allows for their features to be distinct, though the same cannot be said of their animations. There are a number of particle effects that are used in spells and ranged attacks, which again may account for the performance issues. The backgrounds are also hand-drawn, but lack the detail and awe of the game’s closest comparison, Vanillaware. These backgrounds are not the main focus, however, and the character designs are the title’s strong point. The music is bland, for the most part, having a Tolkien-esque, fantasy medieval flair that often dips into Japanese sensibilities. There are select few battle tracks feeling catchy enough to avoid becoming grating, but few selections truly stand out. At best, Fallen Legion’s soundtrack is unoffensive.

I wish that there were more for me to discuss regarding Fallen Legion, but that is more of a fault of the game’s content than my review. Outside of town sections and battles, there is nothing else to do except browse the glossary and mess around with your (limited) equipment options. The most damning criticism I can give of the game is that, at its core, its content feels akin to a mobile game, despite my confidence that its battle system would never be executable on a system lacking buttons. Even so, the difficulty spikes in the game force the player to practice stringent Perfect Blocking or return to earlier stages in order to grind out Exemplar tributes, which kills any sort of narrative momentum established up to that point. When your game is all grind and no side-content, it tends to grate on the nerves, which is exactly what Fallen Legion ended up doing. While the idea of having two full-blown narratives may sound enticing, outside of the decisions made, both characters end up facing the same enemy types and using the same group of Exemplars. If you are looking to test the limits of your ability to enjoy new and creative combat systems, I might halfheartedly recommend Fallen Legion. With the ability to replay scenarios there’s no shortage of combat to be had, but you’ll only get so far before the flaws in its execution start to wear you down.