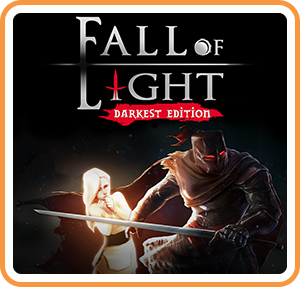 There are times when I am amazed by FromSoftware’s influence on the Role-playing genre. For better or worse, the punishing damage and stringent stamina management of the Dark Souls series has bled into a number of independent titles. While some, like Salt and Sanctuary, manage to blend these mechanics into a Metroidvania overworld with numerous looping paths and unique traversal mechanics, others go for a more direct, dare I say, soulless approach. Taking the committal attack animations, limited healing, and grimy aesthetic influence is one thing, but choosing not to refine these concepts can separate a great game from an average one. In other words, there is a difference between succeeding at making a Souls-like title, and attempting to make one.

What does this all have to do with Fall of Light: Darkest Edition? This isometric perspective action-based Role-playing game certainly has its own unique flair, possessing some unexpected mechanics and novel narrative twists, but it falters in its execution of some fundamentals in a way that damages the entire experience. Having played a steadily increasing number of titles with similar foundations and design influences on the Nintendo Switch, this puts Fall of Light at somewhat of a disadvantage. In the end, does the product remain satisfying as a whole, or does it leave players in the dark?

To set the stage, a father and daughter duo set out on a journey through the vast chaotic world in what many others have called a blend between Ico and Dark Souls gameplay. The father, a strong and somewhat malicious-looking knight, is able to pick up a number of different weapons, ranging from the standard sword and shield to the more unique axe and mace dual-wielding combination. Through the use of light and heavy attack inputs and a back-step and dodge button the player is expected to navigate a series of environments and enemies in order to collect the materials needed to shepherd your daughter to her safety.

The Ico comparison comes from the way you occasionally interact with your companion, the protagonist’s daughter Aether, who is born of light. By holding the Y button, you can grab her hand and drag her around at a brisk pace without draining your stamina. At least, until she trips over and must hobble along for a brief period. Likewise, she can be commanded to stay in a certain spot so that she won’t be pummeled by enemies, or to solve one of the few partner-based puzzles that exist. Her greatest benefits are the way she enchants the player’s weapons within a certain radius, giving them a meager offensive bonus, and her ability to level up the player character by praying at certain alters- an act that also acts as a checkpoint and save system. 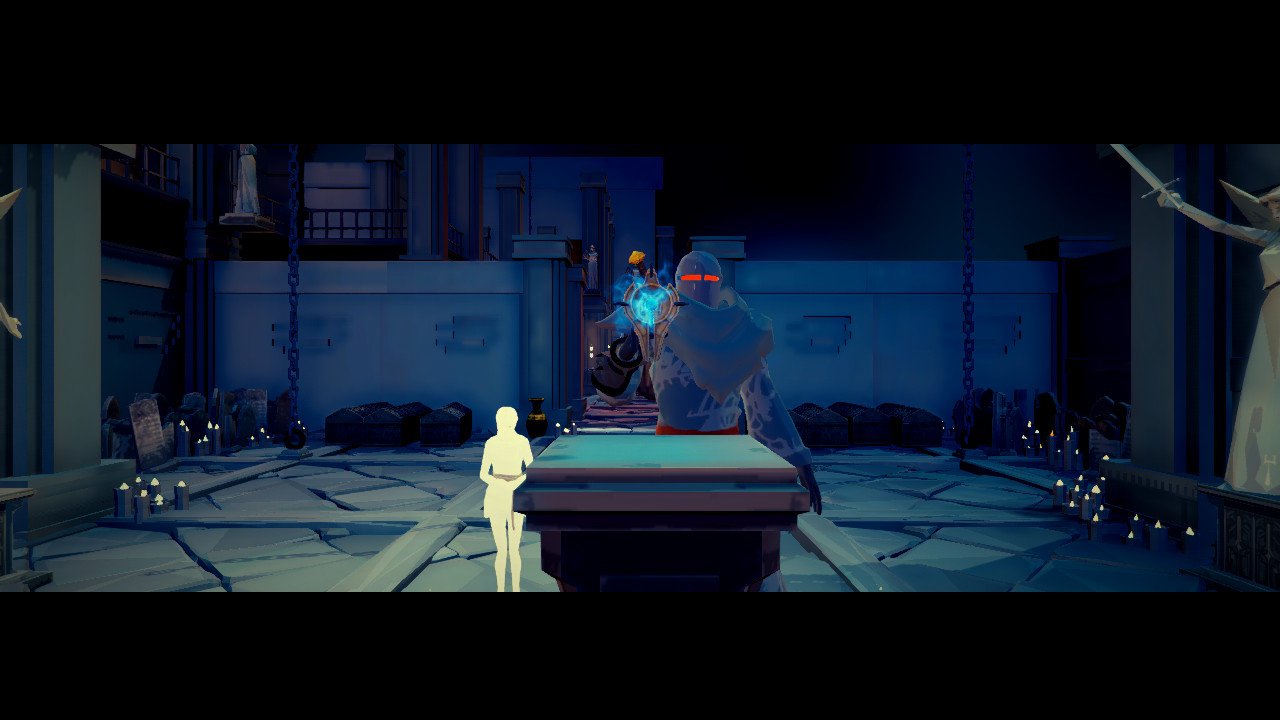 Despite this, there are times where the player will fall in battle, which leaves Aether exposed to two different types of danger- either being killed on the spot, which can be subverted through a strange and snappy resurrection mechanic upon finding her soul, or being kidnapped, which required finding a cage in each environment and flipping the switch to release her. Without her presence, the player cannot spend their accrued experience or save the game, which is doubly aggravating, considering you lose experience upon death. While resurrecting Aether is easy enough, making it back to the place where she fell or infiltrating a caged area are extremely risky ventures because of two fatal flaws: the combat and world design.

Any action Role-playing game requires well-defined concept hitboxes, and while many have bemoaned those present in the Souls games, there is a sense of familiarity established that is also bolstered by an intimate camera perspective. With the zoomed out, isometric perspective of Fall of Light, as well as its contextualized pitch-black locales, it is often extremely difficult to gauge when an attack will connect. Although every attack has a slicing trail that accompanies it, this only helps establish the range where a move should connect if a body should be within that range. Still, these hitboxes have a tendency to miss, to a point where standing right next to an enemy and unleashing a flurry of light attacks can either do or appear to do absolutely nothing. In addition, enemy attack animations are extremely fast and have wide arcs with almost no windup, so finding the proper angle for attack can be a stressful game of cat and mouse.

This is further complicated by the infrequent stun animations that occur on both the player character and the enemy, where attacks do not always interrupt attack animations. Add to this the punishing damage ratios that result in each separate enemy encounter feeling like a high-stakes gambit, the resulting combat mechanics feel frustrating and- most importantly- unfair. The only way to ensure an enemy won’t strike back is via over-leveling to the point where every attack dealt is either a one to two-hit kill, a strategy that only works in relation to the numerous enemies scattered throughout the world. The boss encounters, on the other hand, have even more deceptive hitboxes and deal several points of damage (of which you have a relatively small pool), which turns their confrontations into a contest of how much raw damage can be dealt in the smallest amount of time.

The most sound solution is to exploit the weaponry with the most range, and there are some options, like the halberd in particular, that are effective with this strategy. Throughout my time with Fall of Light, however, I never felt a strong sense of security in what I had learned about the game. New enemy types would frequently pop up and decimate me in the span of a few seconds, booting me back to my last checkpoint and causing me to lose a great deal of progress. While a part of me feels as though I will be berated for my lack of proficiency (aka git gud), there are a few details that make me question whether or not my issues with the combat are from a lack of ability or a lack of polish.

What complicates the annoyances found in combat further are the extremely large level layouts and relatively low amount of checkpoints. Again, a small number of save-areas is forgivable in a game that allows a player to loop backwards and heal should their current adventure look unfeasible. However, because the player needs their escort partner alive and present to save, they need to push all the way back through an environment in order to find her once more and return. While having a large game world to explore might sound like a positive, the large swaths of familiar-looking terrain can disorient and aggravate, especially upon losing progress. Unlike other Souls-like titles, Fall of Light has no “second chances-” the experience you lose in death is lost forever. What’s more, there are several transition screens throughout the world where Aether would unexpectedly be kidnapped. While the game establishes that there are demons that will snatch her away should you not fend them off, they never prepare the player for these bizarre spontaneous kidnappings, to the point where I can only assume they are some sort of glitch.

Having now played a number of titles with Souls-like experience systems and combat mechanics, Fall of Light feels frustrating because of its overall unpolished blend of mechanics and the way the player avatar interacts with the environment. The player can be killed by drowning, bottomless pits, and various other environmental hazards, but the terrain is often an enemy in itself in another way. There are numerous instances where the player can be caught clipping on certain parts of the level design, such as curbs, walls, and sloped terrain, in a way that makes me question the overall quality of the title. Although the practice of highlighting flaws is never an enjoyable part of critical analysis, it is important to point out to anyone curious about the title, as I initially was.

The major tip-off about the quality of the title comes from its presentation- sort of. The game has extremely clean-looking environments that are masked by the darkness, which means the many enemy types (all humanoid, even when possessing reptilian features) are all shrouded in shadow unless they’re sporting sky blue robes or golden armor. What is most disappointing, however, is that the main graphic that accompanies the game, which proudly displays Aether and her father, is absolutely gorgeous, showing off the potential that these character designs could have had were the actual in-game models not so painfully basic. While the zoomed-out camera masks the simplicity of these models, any cutscene involving a closer look exposes their quality. 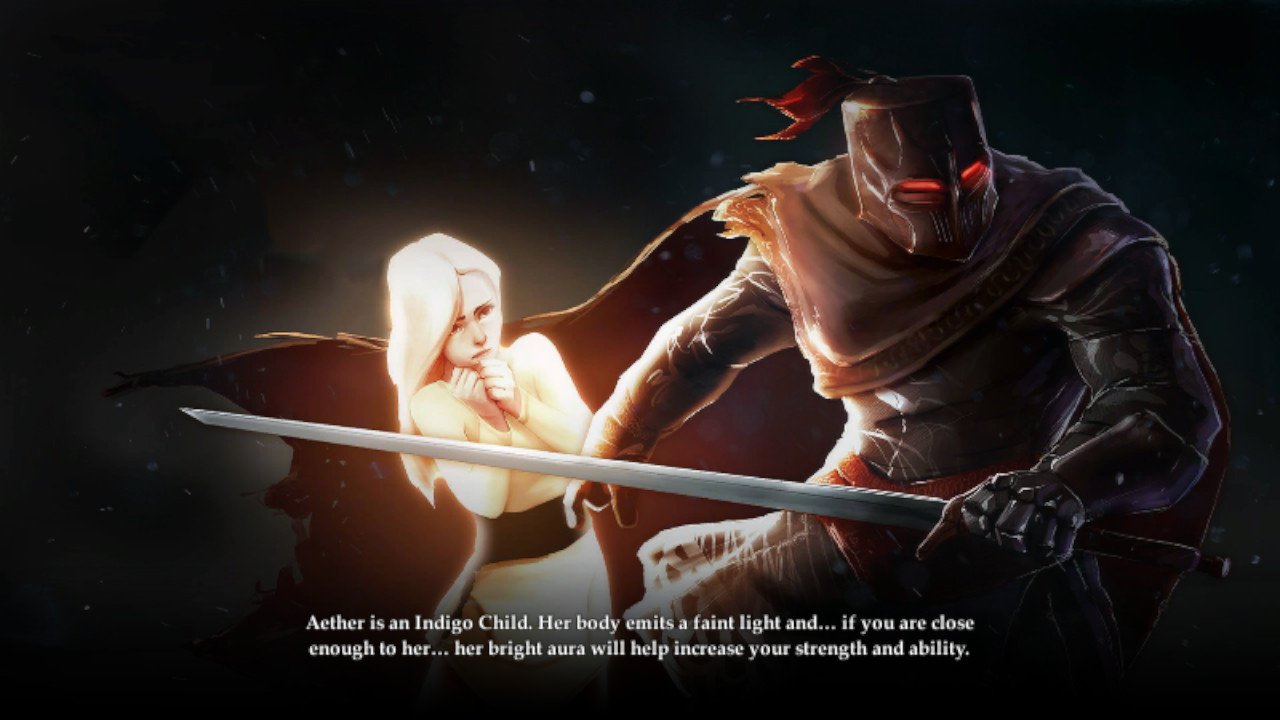 Sound effects and music are generic and low-key, as there are some sweeping boss battle tracks, but most other environmental noise and music is far too quiet to be heard or appreciated. As for the narrative- there is one. Hidden beneath a story of warring light and dark factions, there is a more subtle discussion of Pain and a real-world conflict, but the cutscenes that give away these plot points lack any subtlety. Though the characters in the world view it from a medieval and fantastic perspective, the only real mystery that remains is how this fantasy setting is justified in relation to the “actual” one.

For a small independent title, the amount of time I have placed into explaining what exactly doesn’t sit right with me about the game is substantial. However, I want to make it clear that the extent of criticism I have offered is proportional to the amount of time I invested into the game itself. I believe that Role-playing games, especially those with Souls-like mechanics, should feature a moment of triumph: a moment where the player feels as if they have truly mastered the mechanics, understood the patterns, and utilized the best possible tools in order to surmount the challenges laid before them. With Fall of Light, I felt no such moment. Each new environment became longer and longer, each technical misstep grew more irksome. The inability to form strategies because of inconsistent results and overwhelming imbalances was not enjoyable. Most importantly, I felt that, because of the bizarre mixture of mechanics, my time and effort went unappreciated. Understanding that this game has undergone patches for performance and combat on other platforms says a great deal to me about its current state, which I still believe is not quite at the level it needs to be in order to be labeled a competent Souls-like title. I am disappointed to say that Fall of Light did not meet my expectations, nor do I believe it is worth recommendation.