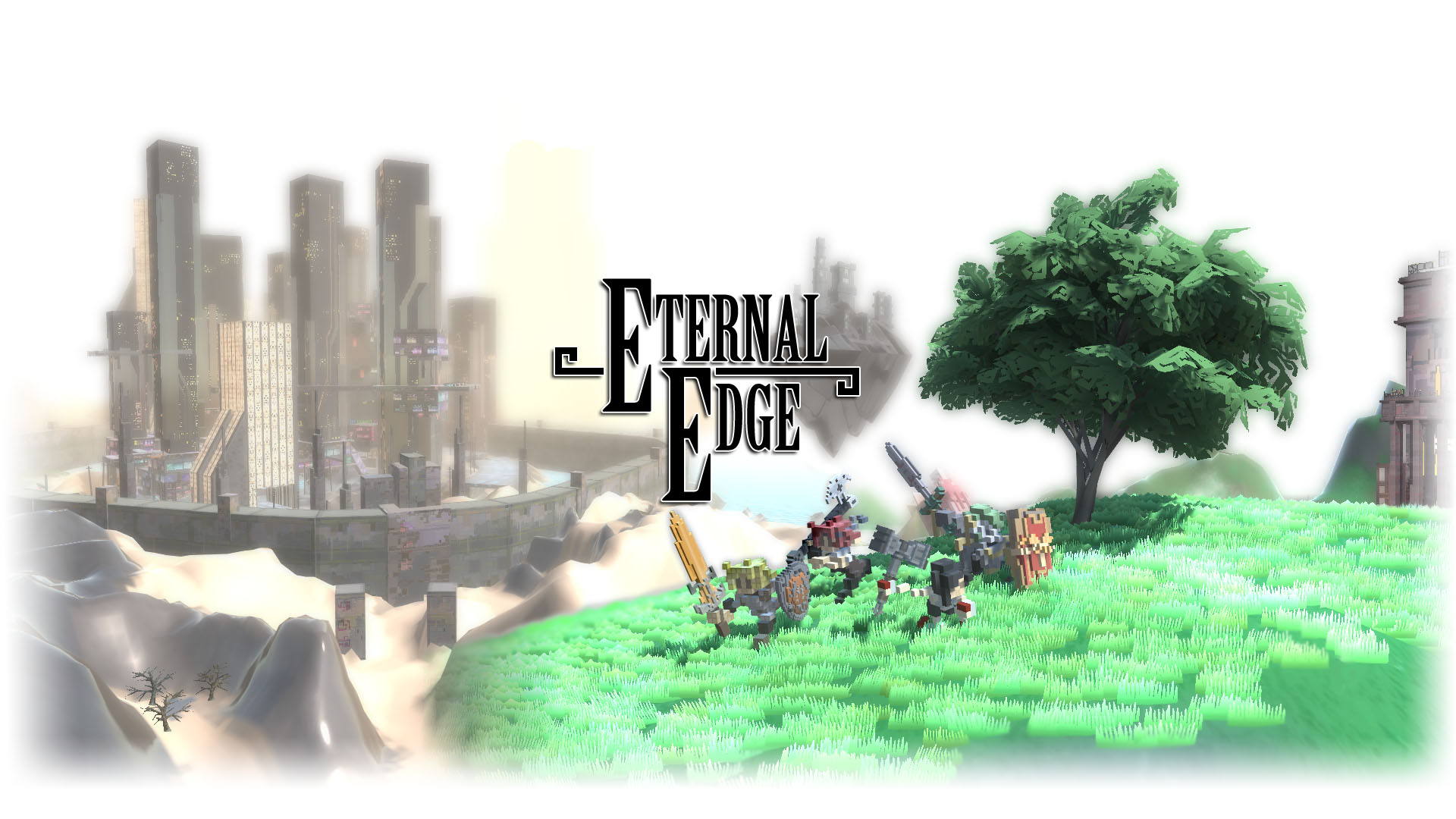 Eternal Edge is a new action adventure RPG from indie developer Righteous Weasel Games that presents lofty concepts mixed with a heavy dose of familiar genre conventions. I want to preface this review with a disclaimer that some of my issues could be 1) unique to me because of poor eyesight 2) only experienced on the Nintendo Switch version, not the Xbox One version 3) patched as the developer continues to work to optimize it for the Nintendo Platform. I also want to encourage you to remember the scale we use here at SwitchRPG.com and ask you to read my thoughts carefully to determine if the issues I focus on are game-breaking for you when it comes to your ultimate purchasing decision.

The story in Eternal Edge is straightforward, taking a page from classic action RPGs. It presents a world of castles and villages and evil lords. When the evil Skeleton King threatens to take over the world, a young hero is forced to take his mentor’s place as the one to save the planet from impending doom. Our young hero’s name is Cross, a character with little complexity leading in a story with roughly the same level of complexity. Honestly, I’m not holding the lack of story depth against this game since it’s not trying to be a narrative masterpiece in the first place. As I stated before, it takes a page from other action RPG narratives. Much like the recently released Blossom Tales, you are tasked with completing four main objectives to face your ultimate foe. These objectives take you across a vast land with varying settings.

While I don’t hold a thin story against Eternal Edge, this is where things start to go down hill. If the story in a game isn’t there to grip players, it must offer something more special in the areas of gameplay or presentation to make up for the lack of depth. Unfortunately, Eternal Edge just doesn’t do that.

The graphical style of Eternal Edge draws comparison to vintage pixel adventures yet morphed into a 3D space. Some players might compare it to a game like Minecraft for its three dimensional pixel feel, but that general description is where the comparisons honestly end. Although both titles present blocky worlds, everything in Minecraft is far easier to look at. Perhaps it’s just my poor eyesight, but I found objects in Eternal Edge difficult to make out. Between the way each individual 3D pixel appears within a blocky object and the hazy lighting filling the world, I had trouble looking at the graphics for long periods of time. And where some pixel graphics come across as artistic and pretty, the pixels here felt a bit clunky. Once again, it’s all about clarity. Since the pixels themselves are more complex than simple blocks, there’s a lot going on visually, leaning more toward cluttered than clean.

Another issue graphically that could definitely be attributed to my eyesight is the text throughout the game. It is so small playing the Switch in handheld mode (my preferred mode of play) that I could barely read it at all. The menu text was difficult to read, but the quest text on the UI when tracking a quest was illegible. Between its minute size and it’s white color, it often disappeared into my surroundings, forcing me to angle the camera in certain ways to just read it before continuing on my way.

Speaking of my surroundings, the overworld itself is a bit of a graphical mess. The game offers an impressive world size, but the traversal across that world is pretty tainted by distant grass not rendering until you are very close and mountain assets flickering back and forth between detailed and plain. I cannot speak for the Xbox One version; perhaps these graphical abnormalities don’t exit there because of fewer hardware limitations. But on the Switch, these things are not only present, they’re distracting.

Additional minor graphical bugs also take away from the experience. For example, character health bars often bleed onto other UI layers (I know this sounds small but stay with me). When your party members’ health bars appear above their heads, even if other graphical layers pop up on screen such as a dialogue box, those health bars will remain in the forefront even if the character itself is not. This makes some lines of dialogue unreadable because a green bar is redacting parts of the speech bubble. I even had those green bars not disappear when loading screens popped up, leaving me looking at a black loading screen with a game icon at the bottom right, and random green health bars floating in the middle of the screen. While minor, instances like this break whatever immersion I’d built while in the world.

Bringing up loading screens leads me to one of the biggest downfalls of this game: its performance on the Switch. Once again, perhaps the Xbox One version performs better, and perhaps this is something the developer can patch in the future, but as the game plays now, it’s a slog. What really hurts the pace are the numerous loading screens: between cutscenes, from cutscene to gameplay, from overworld to dungeon, and even when entering the inventory. Yes, that loading screen is only half a second, but it’s there, it’s visible, and it makes opening the inventory feel a bit like a chore. Other loading screens, however, are not as kind as the half second flash to get to the inventory. I sat at some loading screens for longer than a minute, many of them being at least forty seconds. When I’m just transitioning between areas, this feels like an immersion-breaking eternity. I’m not the most distracted person in the world, but I often found myself browsing through my phone waiting for the game to load.

Speaking of the inventory, once you get there, the performance problems don’t really go away – traversing the menu feels sluggish as well. Instead of snapping from one inventory pane to another or swiftly clicking over the various items in your weapon bag, there’s a slight delay with each input. This is yet again a small thing, but it’s one that sticks out considering so many other games get performance right.

The issue with performance that is NOT a minor thing is the actual performance of the gameplay outside of the menus. Running around the world map is not just a graphical subpar experience: traversal, at times, feels like running through molasses. While you’re running, every few seconds you will experience a snag that feels almost like lag in an online game, resulting in a choppy adventure. Surprisingly, running around in dungeons or other indoor areas does not appear smooth either. The framerate tanks at some junctures, an occurrence I cannot look past. I have gone on the record more than once stating my desire for performance over almost everything else in a video game experience, taking a smooth framerate over gorgeous graphics any day. Sadly, Eternal Edge on the Nintendo Switch doesn’t deliver on either.

When games lack both story and platform optimization, a decent gameplay loop is typically the only saving grace to fall back on. Like other action RPGs before it, Eternal Edge builds much of the game around combat. While traversing the world, you can enter combat events that task you with taking over outposts or defending ally structures. These events fall a little flat, however, as the depth of the combat itself is lacking. Many encounters can be solved by just spamming the attack button despite the existence of a dodge skill and shield mechanic. The world events specifically turn into a clustered mess of allies and enemies, making it difficult to keep up with your character and discouraging the use of the aforementioned dodge skill.

Combining the cluster issue with the performance/optimization problems already covered, you can imagine combat encounters that I just preferred to avoid altogether rather than run toward with anticipation.

At the end of the day, I have to ask myself if I would recommend this game to a friend, and in my honest estimation, I can’t say that I would. The problems I encountered in my playthrough were more than just minor annoyances – they were distracting at best and verging on infuriating at worst. As I’ve stated, a game can engage players with one or a few different categorical features, ranging from story to performance or gameplay presentation. Unfortunately, the prevalent framerate issues on the Switch version combined with a lack of fun gameplay do not give Eternal Edge an avenue with which to grab its players’ attention – and the story, while not intending to from the beginning, just does not have enough substance to outweigh the issues of the other areas. And on a very surface level, sitting on loading screens long enough to encourage me to look at my phone while I wait does not make for a fantastic experience. Honestly, many players may look away from this game and never look back.

Moderator. Podcaster. Facebook Page Manager. I enjoy playing video games and talking about them. I game primarily on Nintendo Switch, PlayStation 4, and PC.