Action Role-Playing Games can offer a great deal of variety: from the stamina-stringent titles like Dark Souls and Monster Hunter, to the simplistic, yet satisfying warlord action of Dynasty Warriors and Sengoku Basara, and all the other odd variations between, like the macabre Pandora’s Tower and the profound Nier: Automata. It’s always pleasant to see a new developer trying their hand at this brand of action, which is why my ears have been perked ever since Tawainese developer JERA Game Studio announced Dusk Diver. Taking place in the popular Taipei neighborhood Ximending, Dusk Diver offers a bit of teenage slice-of-life silliness alongside a stylish and sinister dual-world mechanic. Does it manage to carve out a deserving niche on the Switch, or are its aesthetic similarities a bit too much to overlook?

Dusk Diver’s protagonist, Yang Yumo, is a seemingly normal, albeit stylish teenager with her own set of teenage responsibilities. However, these are usurped when she is saved from death by a powerful Guardian named Leo. As it turns out, the dual spirit world Youshanding is the realm where Guardians normally reside, but dimensional rifts have begun forming due to demons tearing apart Dragon Vein Stones, a protective measure against such catastrophes. By enlisting the help of several Guardians, Yumo hopes to help the people of Ximending and hopefully close all the dimensional rifts to Youshanding.

Gameplay is split largely into two sections: exploring Ximending and combat in Youshanding. In the former, you’ll navigate the short set of city blocks in order to trigger dialogue sequences, receive sidequests, and eat food- lots of food. You’ll also be able to seek out Dragon Vein Stone Shards, broken pieces of a larger whole that help Yumo make the jump into Youshanding. Though less thrilling, there is a nice balance to the Ximending segments, which is mostly comprised of hunting down NPCs and engaging in conversations with your partner Guardians. One of the more frustrating elements of Dusk Diver are its hidden Dragon Vein Stone Shards, which are often hidden a bit too effectively within the environment. As Yumo traverses Ximending, “Boss” will often shoot her a voice message, warning her of a nearby Shard, but you can walk past one of these several times without it catching your eye due to their technicolor nature, which blends in with the vibrant environmental aesthetics better than it should. If Shards had a bit more of an opposing color scheme, they might be easier to spot, but then again, that would also take away the feeling of accomplishment that comes from figuring out where these things are hidden. 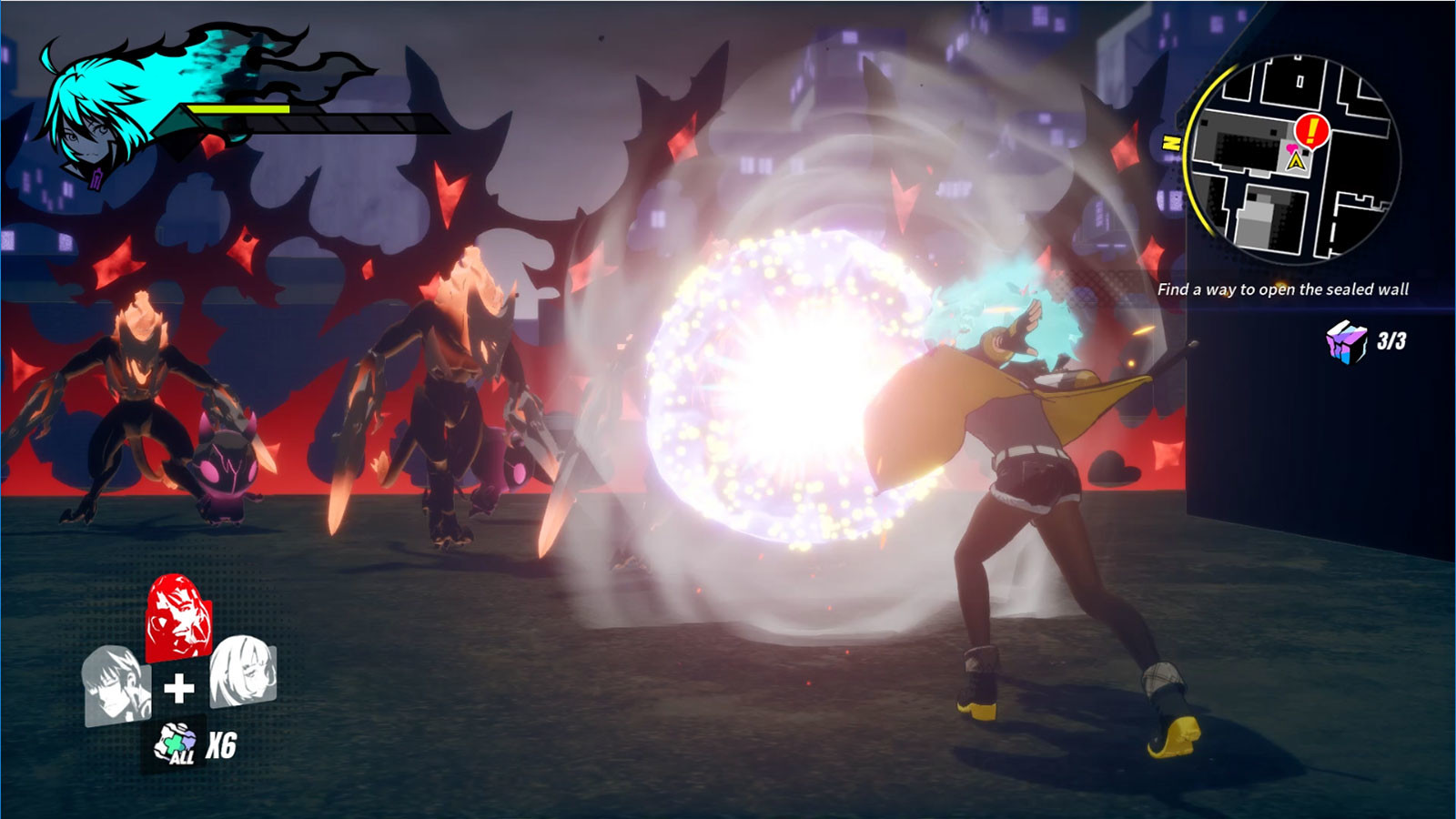 The more pulse-pounding element of Dusk Diver are the combat sections taking place in Youshanding. This neon hellscape is filled to the brim with imps, demons, and beasts bent on taking a piece out of Yumo. Luckily, she can take care of herself, due to the bonds she has formed with several Guardians. The combat of Dusk Diver is very straightforward- Yumo can perform a series of light attacks, which can also be chained into a heavy attack finisher, similar to gameplay featured in Dynasty Warriors. However, she can also follow up a heavy finisher with a summon attack, where her currently-equipped Guardian will warp in and lay into an enemy with an additional, intangible, and uninterrupted strike. These often mimic the design of Yumo’s heavy finisher, which is good, considering you’ll need to use her attacks wisely. Imps will often crowd around Yumo, and though she has a number of attacks that will hit multiple enemies, her area of effect combo is best followed up with a summon attack in order to clear out most enemies.

Yumo can also perform dodges in order to escape incoming attacks, and a well-timed dodge will activate her own “Witch Time-like” slowdown opportunity, which is a nice feature. All of these tools won’t do much, however, if you don’t invest some time in gaining experience and completing side quests, some of which will unlock new features and abilities for Yumo to use in combat. Guardian quests often take Yumo around town and towards different restaurants so that she can learn a bit more about her companions, but regular townspeople will increase the might of D. Arms, a special ability that makes Yumo even more of a hellion in combat. There’s a surprising amount to do in such a small space, which makes Dusk Diver feel much more substantial within its price range, which errs a bit on the higher side in comparison with other eShop titles.

Dusk Diver is a surprisingly pretty independent title, and considering JERA Game Studio’s relative lack of history within the industry, this is an unexpected delight. While in dialogue sections, lovingly rendered character portraits will show up and express emotion in response to their conversations- though Yumo herself has odd mouth placement for some reactions. For the most part, the game uses a blend of 3D character models with some high-quality realistic textures when it comes to environmental design- at least, in Ximending, which is meant to look like a trendy walking mall. The game’s appearance gives off similar vibes to Atlus’s 2016 title Tokyo Mirage Sessions- and that’s a very flattering comparison. The bright character designs and aesthetics, coupled with a different-yet-just-as-good approach to crowd control texture pop-in (NPCs fade into pastel colors as they move further from Yumo) truly give this game a highly polished look. Likewise, although the level geometry in Youshanding is somewhat simplistic, it feels like the Idolasphere equivalent of some city streets. Youshanding’s level design isn’t anything to scoff at, with a number of vertical and timed platforming segments that offer some pleasant variety, as well as some differences in theme and locale from chapter to chapter. One more aspect is Dusk Diver’s soundtrack, which has a poppy, upbeat styling for running around Ximending and some more grungy, guitar-riffing tracks for its Youshanding combat segments. I’m not exactly sure what the developers were thinking with the game’s title screen, however, which comes across as much more mellow than the game’s core mechanics would lead you to believe. 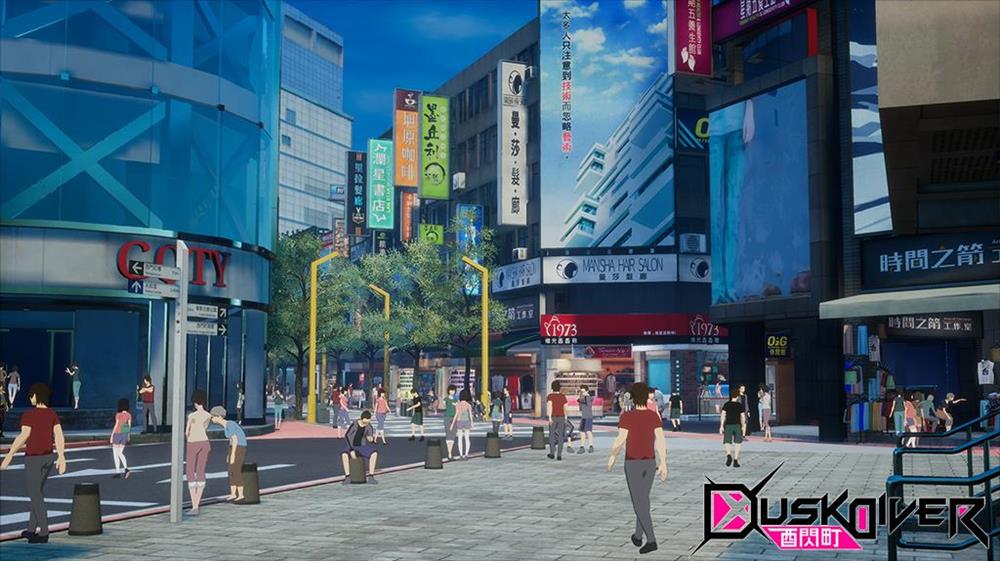 While these aesthetics are indeed delightful, their complexity and fidelity tends to hit the Switch a bit hard. The game looks quite nice on the handheld screen, but the resolution is not as impressive on a larger television. Likewise, the framerate can dip and stutter a fair bit while running around Ximending, and some of the combat scenarios tend to cause severe slowdown, particularly when there are a number of enemies on-screen.

In terms of its narrative, Dusk Diver plays its tropes close to the chest, with a number of characters whose personalities can be gleaned from a single look. There are some exceptions, however, and each Guardian gets their time in the limelight due to the title’s quest system. The mainline narrative is hardly anything all that compelling, however, giving Yumo and company more or less a direction to point their fists in and let loose. While there seem to be some marked effects and unhappiness that develop as the dimensional rifts plague the people of Ximending, the game’s chapter-based narrative makes many of its occurrences feel like something from a slice-of-life anime. Indeed, Yumo starts to settle into and enjoy her role as she becomes more embroiled in the conflict, but the characters never seem to be at too great a risk, their stakes never that high. If anything, most scenarios play out in a rather comedic fashion, which isn’t necessarily offensive, but might lack the gravitas an RPG enthusiast looks for. This might also be negatively impacted by the slipshod localization, which manages to get most of the English vocabulary and structure right, while still allowing some oddities to peek through in the script, causing a distancing effect on the player. If you can bear some awkward translations and occasional misspellings, you’ll make it through Dusk Diver.

I’ve been adamant about trying out games developed by Eastern studios outside of Japan, and Dusk Diver’s “unique” aesthetics and premise captured my attention right from the start. After playing the game, however, I’m even more impressed at the level of quality on display. While the side questing throughout Ximending is hardly the most thrilling affair, there are some cute scenarios to be found, and the Dragon Vein Stone Shard hunt throughout the various chapters and environments of the game is both tedious and strangely rewarding. Make no mistake, however, finding these Shards in Ximending is definitely the least fun you’ll have in the game, which makes the odd choice to gate chapter progression based on how many you’ve collected a bit of a constant annoyance. You’ll be able to pay for Shards with your accrued cash, obtain a radar that does help with the process, and replay older chapters to comb the environment for more hidden in Youshanding, but this feels more like an additional layer of grinding atop the solid experience and currency systems that are already in place. 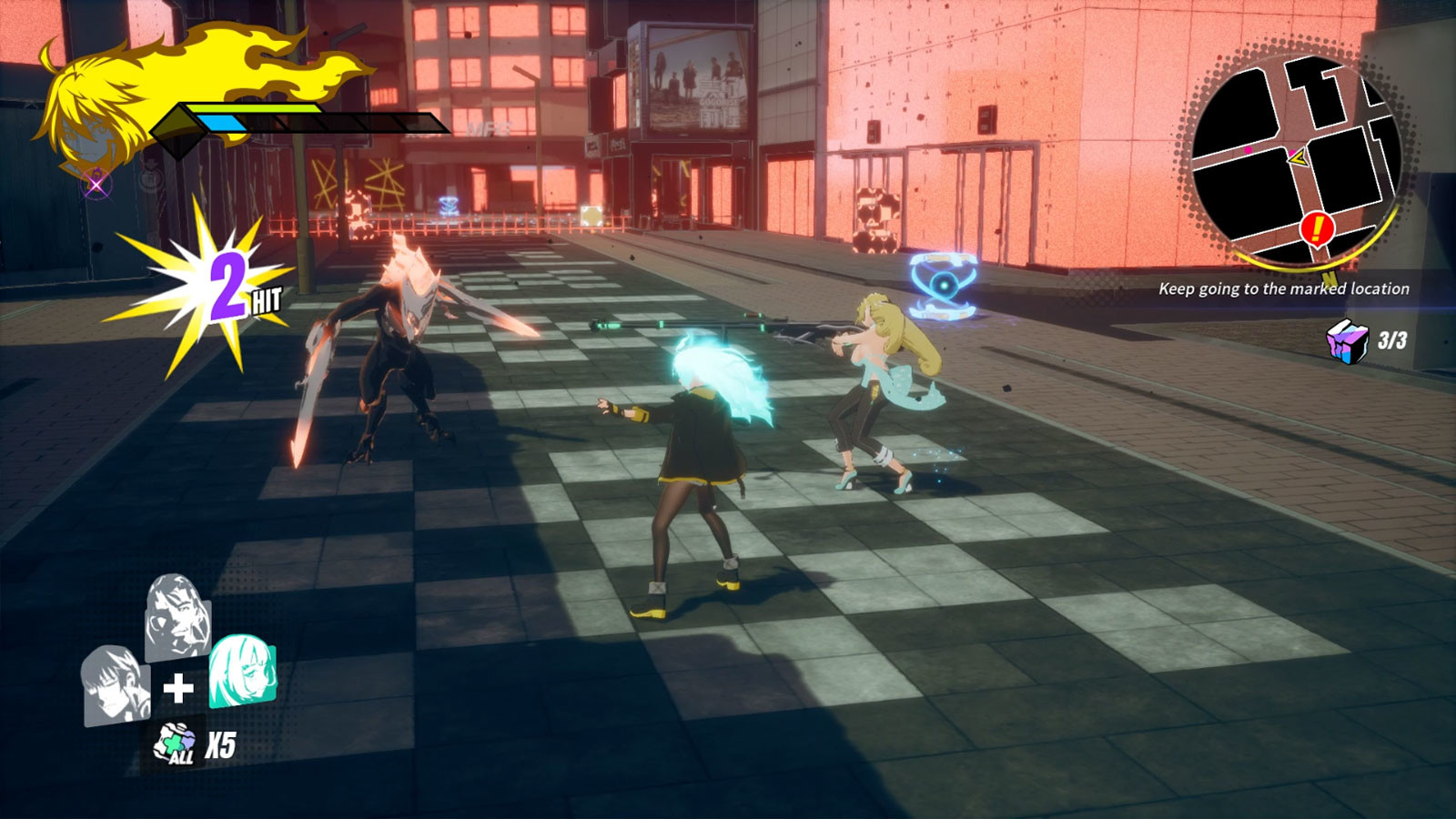 A very enjoyable aspect of Dusk Diver is its progression system, which uses experience points to offer tangible and transparent rewards for investment into Yumo’s various stats. Should you wish to ease your ability to enact slowdown perfect dodges, you can pump stats into that area, or buff the abilities of your partners. Its fun, and it encourages the replay factor of older chapters, which grant experience in both their normal and hard difficulty settings. Proper investment and a decent understanding of the combat system might make the game’s convenience store mechanic a bit superfluous, as your Boss will offer you a variety of consumable items for use in Youshanding, but investing cash in the various restaurants across town also adds products to your convenience store. Even in spite of its very split worlds, there’s a great deal of synergy on display in Dusk Diver, and it’s worth appreciation.

Sure, the combat isn’t all that deep, as you’ll be sticking to the optimal routes in order to take out certain enemy types and saving up your energy to perform devastating blows and transformations, but if Dynasty Warriors can make it work across 90 hour ARPGs with relatively familiar battlefields, then Dusk Diver can certainly get a pass thanks to its unique level design and slightly-deeper systems. While it isn’t a game-changing experience, if you’re a fan of the subgenre and are looking for something different, this title might just scratch your itch. Heck, if you’re looking for more Tokyo Mirage Sessions, this game might also feel like an odd spinoff that manages to work just right.