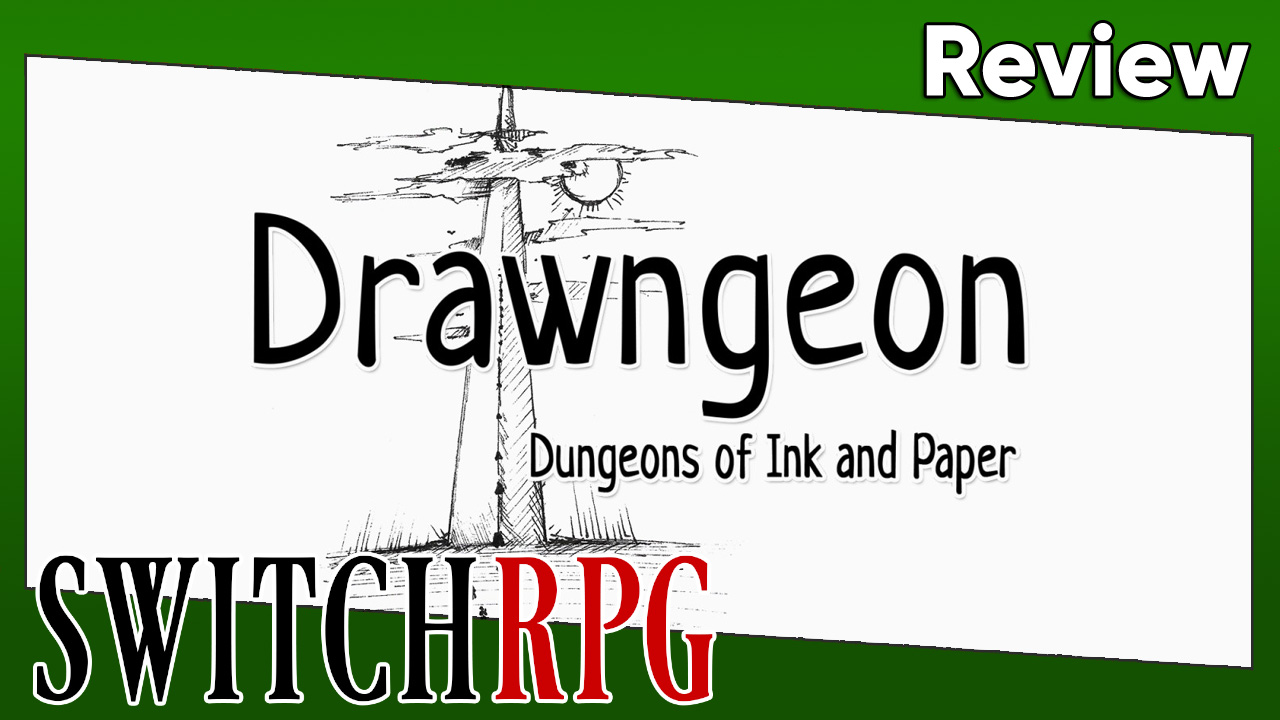 There are a number of games with gimmicks that take a familiar concept and turn it on its head. Developers often ask, “how can we complicate or limit the process of jumping?” “How do we make this usually-boring element more fun?” “How do we iterate on the formula when near-perfect products already exist?”

Then there’s Drawngeon, which lets you eat every single in-game item.

Drawngeon is a first-person dungeon crawler set in a world seemingly crafted from pen and paper- hence the title. Though it might seem like a turn-based affair, you might be able to weave your way around enemies and through attacks if your acrobatic stat is boosted high enough. There are really only a few stats in the game- hit points, strength, wisdom, and acrobatics- the latter three of which are represented only by a distinguishing symbol on the character portion on the HUD, There’s also weapon and shield strength, which contribute toward your ability to whack things and reflect and block damage. Though the game never overtly claims this, acrobatics (or speed) contribute to how fast you can swing your weapon, and many larger items will often possess an acrobatics debuff in order to stop you from becoming a whirling tornado of chaos.

You’ll spend a great deal of time in Drawngeon exploring various environments and completing quests in order to gain experience, currency, and enough levels to tackle later, more difficult areas. While its main town has a set appearance and design, many of its dungeons are procedurally generated, and loot is randomized across runs in order to keep players on their toes. There is a permadeath mechanic, where enough damage will cause your current character to perish and all progress to be lost. But never fear- the further your progress in the game, the more meta-currency you’ll accumulate to bring into the next run. It’s a sort of difficulty-scaling mechanic that will enable you to boost your newly-created character a few levels, or grant them some higher-quality pieces of equipment before you start your next run. It’s a nice way to ease up the barrier of entry for repeat runners. 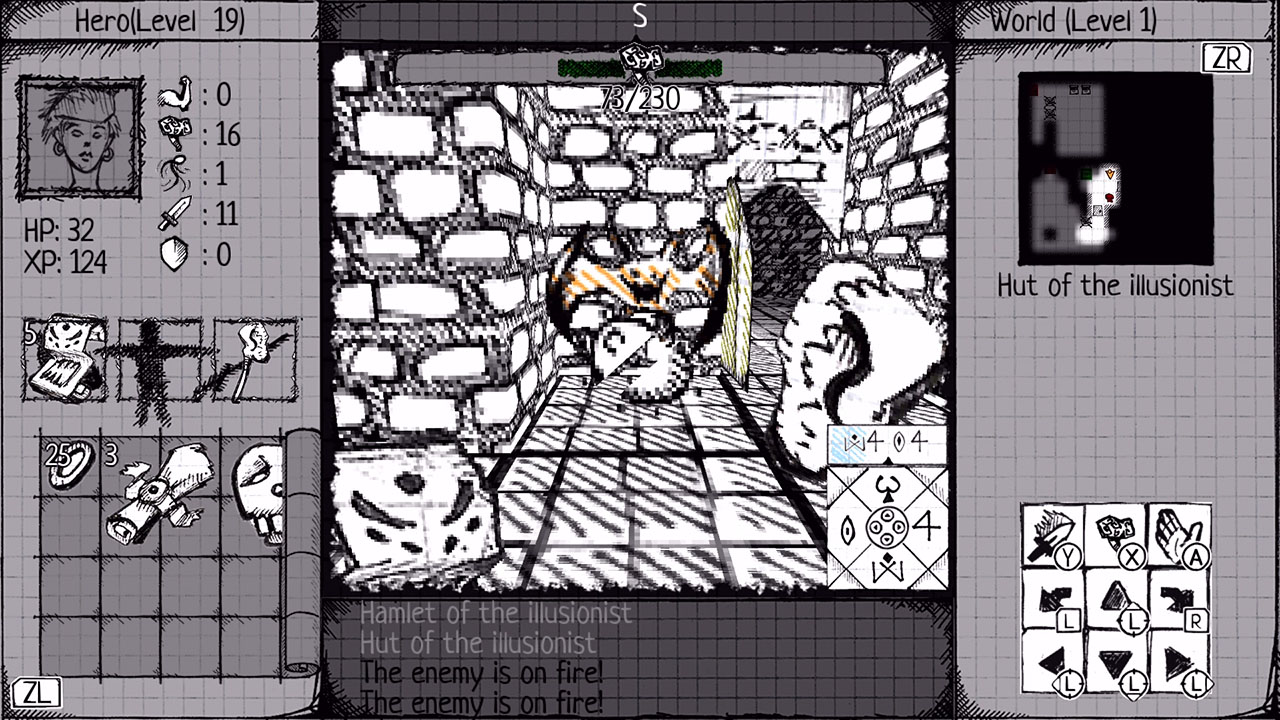 Though many games are championed for their freedom of choice, Drawngeon fails to inform its audience with much direction, failing to telegraph its shopkeeper and level-up and inventory systems early on. You could wander off to an entire section of the map without having encountered these elements at all, and there’s really only experimentation that will result in an understanding of these mechanics. When leveling up, you are granted skill points that you can allocate on the literal skill tree that sits at the center of town. You can buy some specific equipment from a store- always a valuable option for a very specific reason- and also chuck some of your additional, unneeded materials into the mouth of an Easter Island-esque statue, who will regurgitate some money in return.

While currency is always nice, the specific reason one would want to hold on to their items is because of the game’s central mechanic: you can eat anything. Any. Thing. Your old weapon that have recently been replaced with a battle axe? Munch it down. Random pieces of paper? You could use the fiber. Magic mushrooms? You’ll heal, but won’t receive any other “special” effects. Accessories, quest items, what-have-you… yes, you can eat them all. Should you eat them all? Well, if you have max HP, it might seem like a waste. Drawngeon offers so many items on a consistent basis, however, that you really shouldn’t ever suffer a lack of materials, but Drawngeon’s inventory system harms this, somewhat. You can choose to expand your inventory size at the Skill Tree, and if you hope to survive based off of healing items, you’ll want to expand this as much as possible. To put it bluntly, the starting inventory is pathetically small, meaning you’ll need to either leave items in chests or keep gulping them down if you want to maintain a reasonable collection.

There is no story in Drawngeon, only the obscure narrative from the game’s eShop listing. Apparently, a wizard’s tower fell out of the sky and that’s that. Your job is to scale said tower in order to save the realm from certain doom. That’s it. The only thing less charismatic is the sound design, which lacks music, as far as I am aware, and uses some distinct thuds, thumps, and monstrous sound effects in order to communicate the swinging of weapons, movement of enemies, and any other actions that might deserve their inclusion. 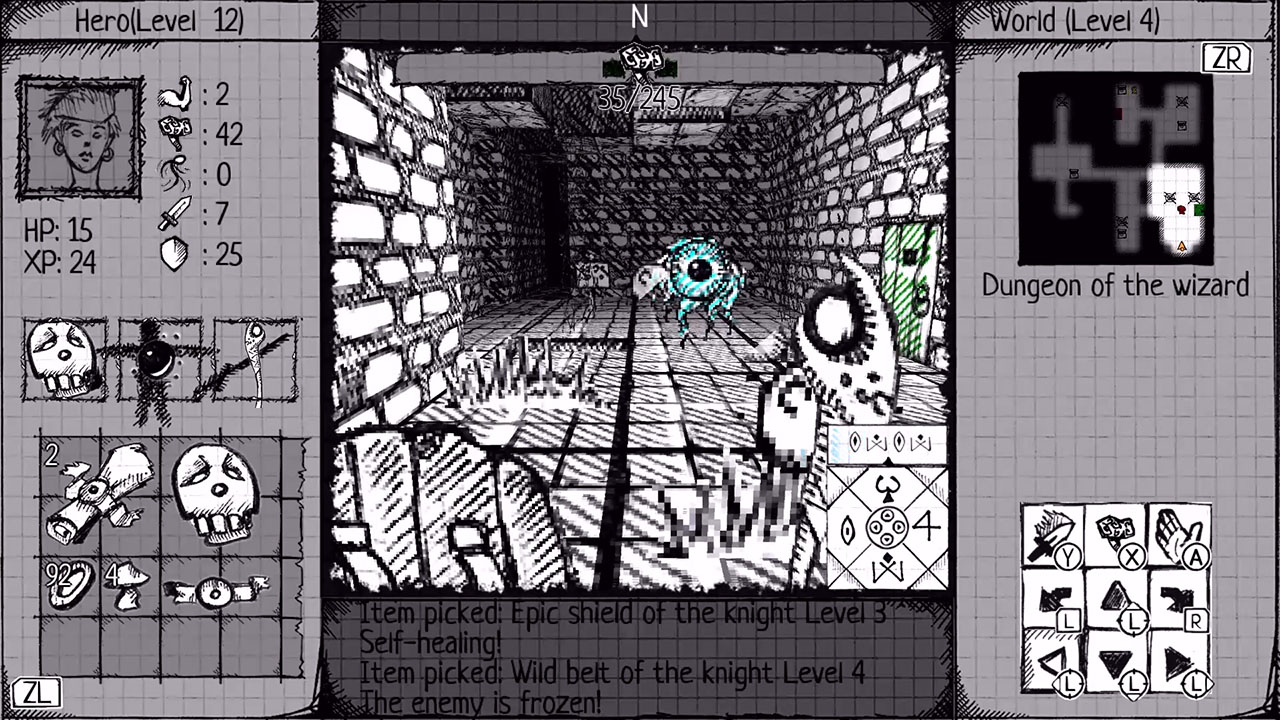 The odd saving grace of Drawngeon is its pencil and paper aesthetic. In unlockable concept art, you can see that almost every art assets seems to have been hand-drawn, and this art style works very well. A few dashes of color here and there help distinguish chests, doors, and especially dangerous enemies, and there are also a number of adorable critters strewn throughout the world. Outside of this, however, there isn’t much going on.

I’m more of a “shoulder buttons mapped to strafing” sort of person, myself, which is why Drawngeon’s control scheme initially irked me. I soon grew accustomed to the button-mapping, however, and found myself having a decent time. My learning curve was brief, needing only a few runs to finally grasp where leveling, exploring, and gaining loot were most optimal. In terms of classes, each character has their own unique quirks, and the most empowering of the bunch felt like the rogue, who can navigate the world quickly and deftly. The magic menu is well-implemented for the mage character, having spells mapped to the D-Pad. Seeing as all these inputs, including dungeon map, battle log, and character stats, are displayed on screen at all times, the end result is a very cluttered user interface. This is only further harmed by the black text on gray background for the battle log. 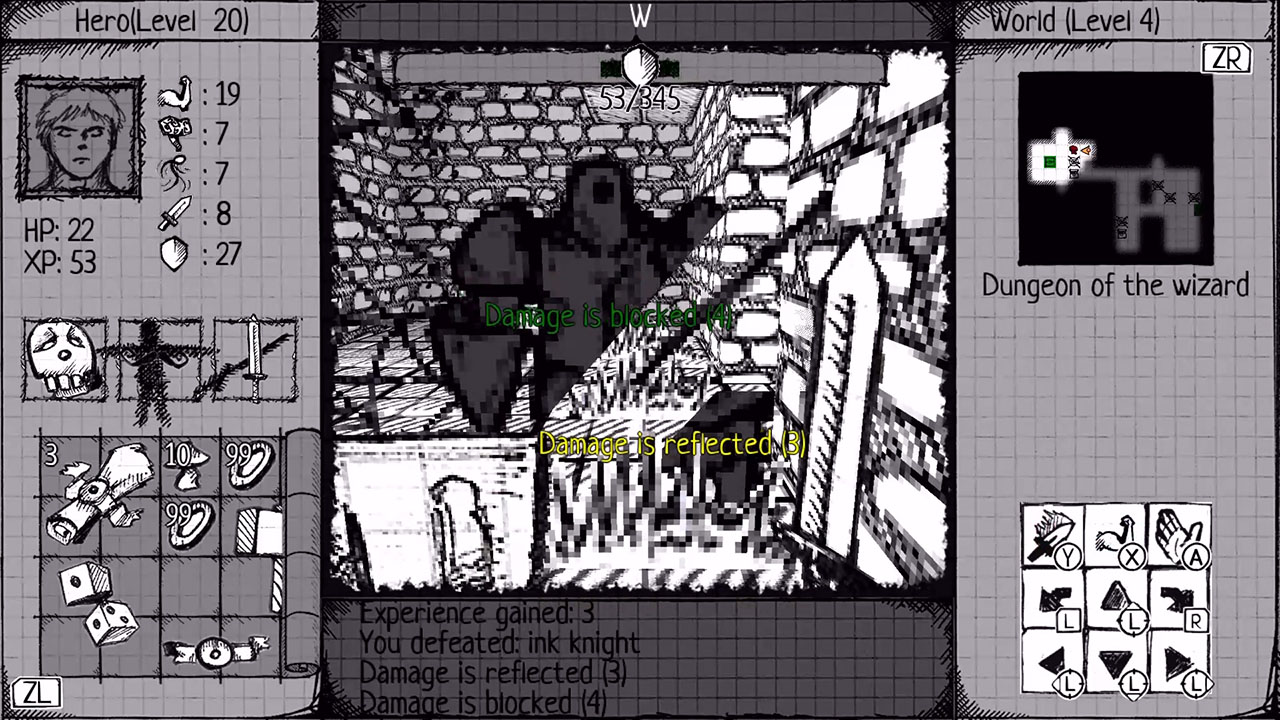 What hurts Drawngeon the most, however, is its relatively lenient difficulty curve that starts as disorientation and gradually feels completely invalidated by its central mechanic. If you have items on hand, you have healing capabilities, and with the disgusting amount of loot the game throws at you, you start to realize that there’s very little threat to be found, even less so due to the meta currency element of the game. While it is a low budget title and a part of a genre that I am no stranger towards, the lack of complexity in Drawngeon rears its head far too early, resulting in a game that feels like it possesses procedural generation not because of any novel or skill-based challenges, but because it’s simply par for the course. If you should enjoy first-person dungeon crawlers, there are far better titles on the Switch eShop. They’re also far more expensive, however, meaning this might be the quick and cheap buy you need to satisfy that itch.