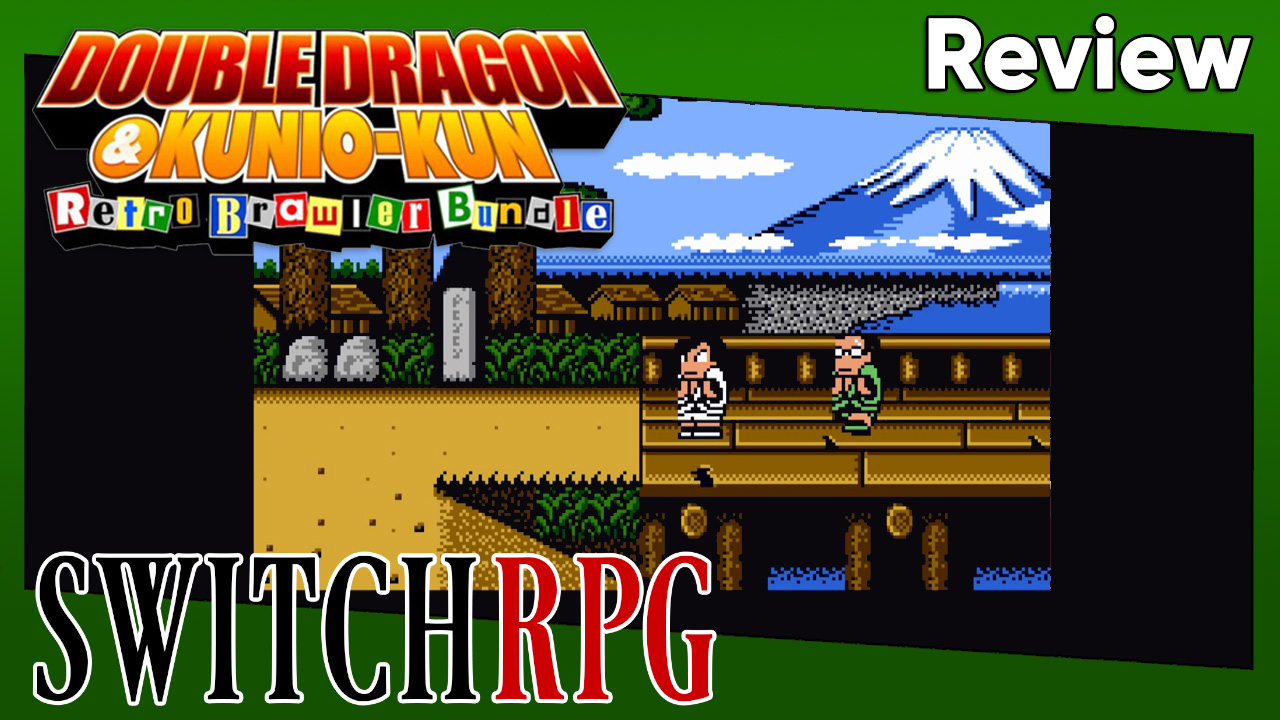 I love Kunio-kun, and that is no secret. I’ve written at length about River City Ransom numerous times, explaining how it introduced me to the genre I’ve loved ever since. Naturally, hype ensues whenever something Kunio-kun is released in the West, not only because of my love for the series, but also because it’s a rare occurrence – until recently. Now, we have the Double Dragon & Kunio-kun: Retro Brawler Bundle – a massive collection of beat’em-up titles and sports games, many of which are seeing our shores, officially, for the first time. Though most of these newly-translated titles are not RPGs, Downtown Special Kunio-kun’s Historical Period Drama falls within the same category as my beloved River City Ransom; the beat’em-up RPG. 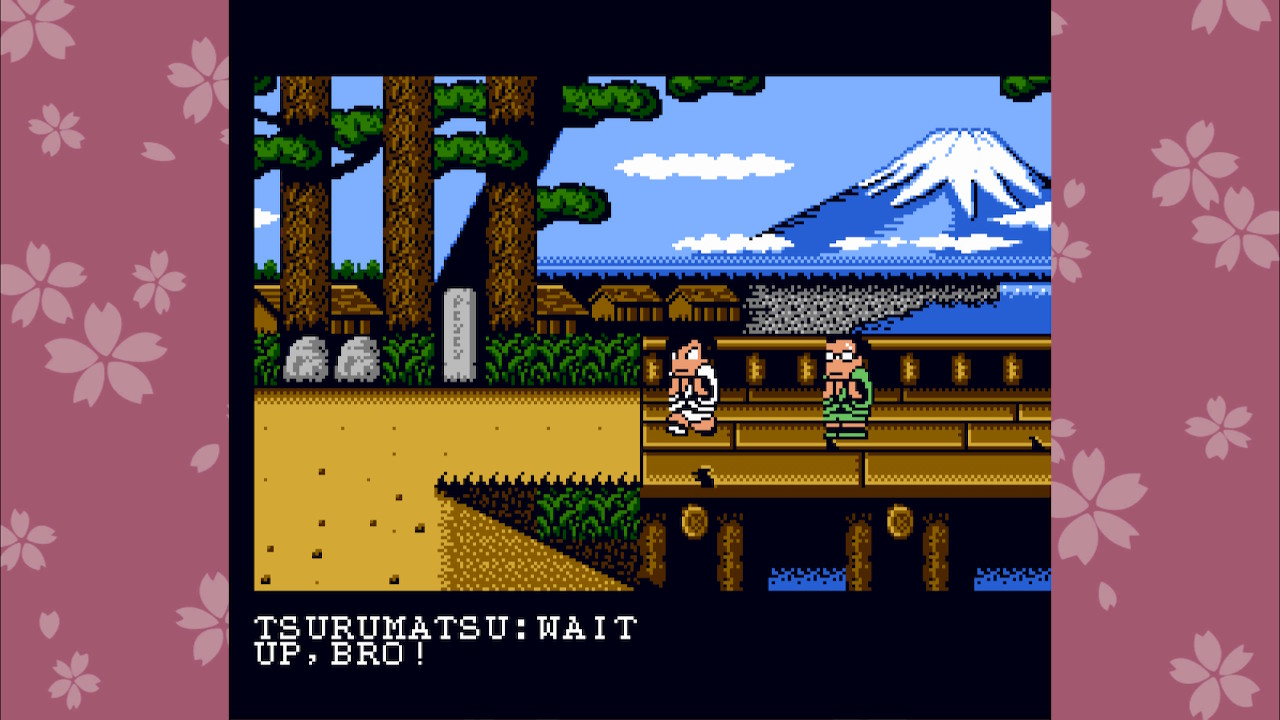 before we begin, it is important to understand that the Kunio-kun series almost always revolves around school rivalries, and often not of the playful variety. Whether the schools are competing in various sports, kidnapping rival’s girlfriends, or – in the case of Downtown Special Kunio-kun’s Historical Period Drama – taking part in a play, someone is inevitably going to throw a few punches, rocks… basically anything that isn’t bolted to the ground. Well, that escalated quickly. Anyhow, as a multi-school play, this has got to be the most realistically violent performance ever put to the stage – well done, game.

Kunimasa (Kunio) and his friend, Tsurumatsu, are tasked with finding treatment for the ill Bunzo, head of the highly respected Bunzo family. Through this process, Kunimasa is introduced to Asajiro, a shady individual that is currently engaged to Bunzo’s daughter, Okoto. Kunimasa senses that something is amiss, and he’s right; this relatively innocent (but unfortunate) situation is but the tip of the iceberg that is the narrative of this unforgettable historical period drama! Okay, maybe I’m exaggerating a bit, but the crap does hit the fan when people are kidnapped and punches start being thrown en masse.

While there is some structure here for a decent plot – by 1991’s standards, anyway – it feels disjointed due to how individual gameplay components actually work. For that reason, I’d argue that it’s predecessor, River City Ransom, edges it out in the narrative department despite having a more simplified story and far less dialogue. As they say, less is more. All that said, most people don’t play Kunio-kun games for their story, and neither should you.

Though a “period play” at heart, Downtown Special Kunio-kun’s Historical Period Drama embraces its beat’em-up roots, technically provided by Downtown Nekketsu Monogatari – referred to as Downtown Nekketsu Story in this bundle – or River City Ransom in the West. As Kunio, the player will travel across a segmented open world, pulverizing anything that stands in their way. While it will feel similar to previous titles at a base level, the tried-and-true gameplay formula is ultimately expanded upon – for better or worse – in a number of ways. 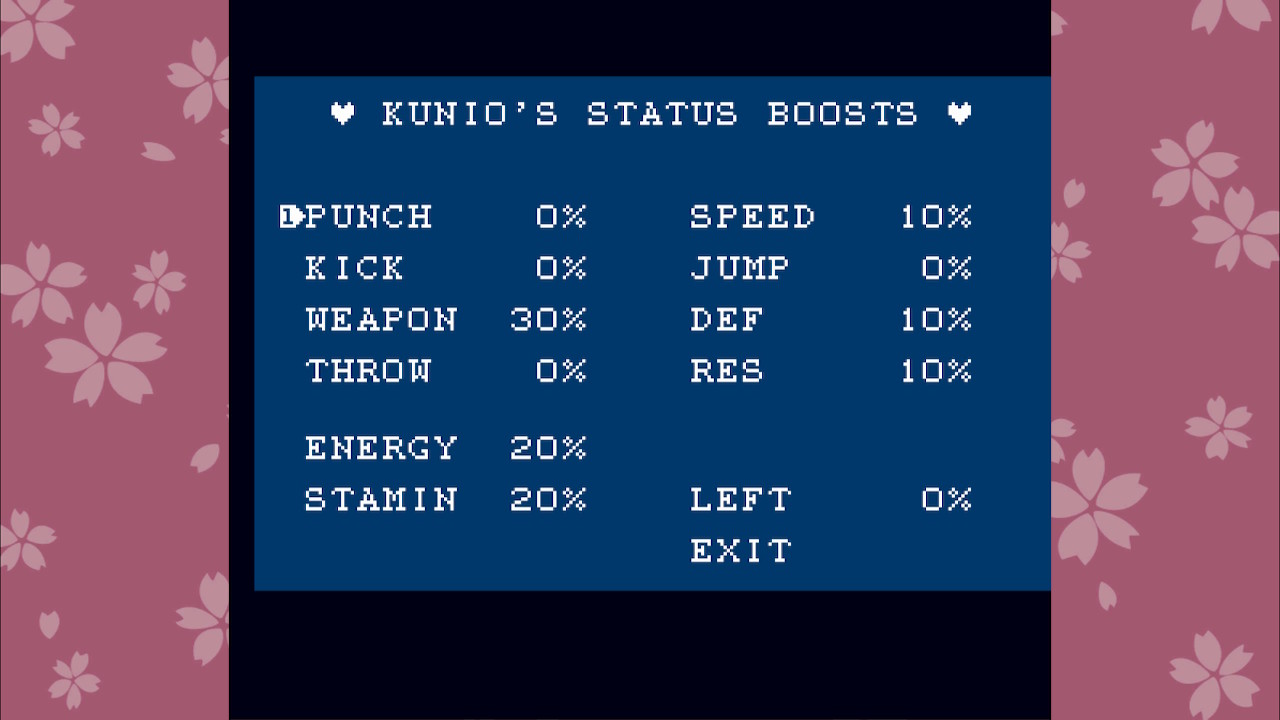 Gone are the gluttonous days of River City Ransom, where the protagonist would have to consume obscene amounts of food in order to increase their stats. Instead, Downtown Special Kunio-kun’s Historical Period Drama provides incremental stat gains – basically, level ups – as you beat things senseless. Individual stat growth can be fine tuned via the boost UI, allowing you to increase (or decrease) specific growth rates of each stat. Finding it difficult to withstand the beating of a specific boss? Boost your Defense gains for a few levels. Conversely, if you prefer the brute force route, load up on Kick, Punch, or Weapon boosts and watch the damage numbers rise exponentially. Oh yeah – damage numbers are visible now, which is a welcome touch. Though stat boosts can easily be a “set and forget” kind of thing, the choice is there for players who want a deeper sense of control over their character development.

Like River City Ransom before it, gear can be purchased and equipped in order to raise stats beyond that of natural progression. Those disappointed by the departure of stat-increasing food will find comfort in the ability to equip as many duplicate items as your inventory can hold. Those kimonos are stylish and stat-dense, right? Why don’t you wear another? And another? And another? I’m not kidding – put on as many Kimonos as you want and you may just rival that time Joey wore all of Chandler’s clothes. Admittedly, it feels a little strange not having to rely on food for statistical nourishment, but it is also a bit of a blessing. The pool of items is much smaller than it was in River City Ransom, reducing the guessing game of each item’s bonuses to only a dozen or two rather than several dozen. Yes, trial and error is still “part of it,” because in-game item descriptions are still not a thing. Curse you and your Famicom roots, game! 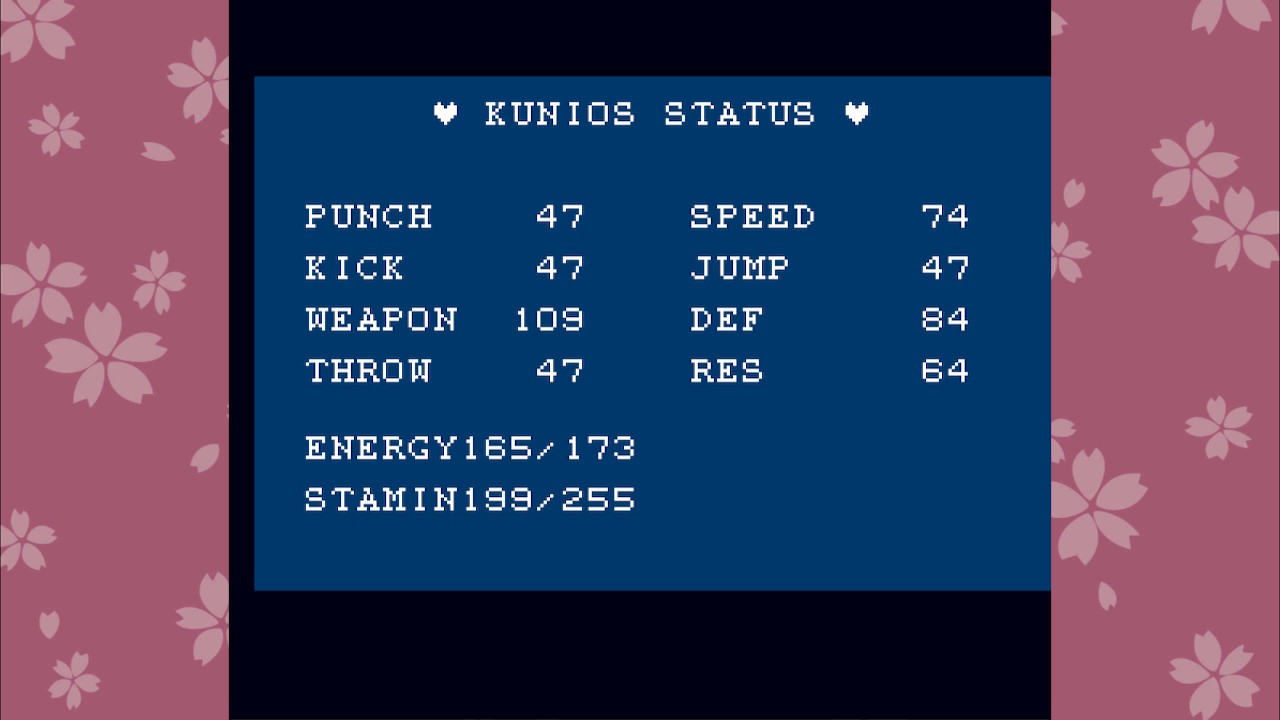 Downtown Special Kunio-kun’s Historical Period Drama continues the tradition of allowing friendly(?) multiplayer, though this time, your companion doesn’t necessarily have to be a human being. If you decide not to play with an actual friend – or you don’t have any friends, like me – an A.I. companion will assist you; whether you like it or not. As you defeat certain enemies, you’ll gather an assortment of companions to choose from, each with their own strengths and weaknesses. These can be swapped between at any time, granted you are at the proper facility first.

While an…interesting addition, Downtown Special Kunio-kun’s Historical Period Drama is still probably best played with another actual human being (unless your friends are complete trolls). I say “probably” because I haven’t tried local co-op, and the online rooms were empty every time I attempted to connect. The A.I. is mostly passable, but frustration can and will result as you witness them making terrible decisions in lieu of being powerless – outside of a couple of programmable tweaks – of stopping them. Apparently, your companion’s favorite pastimes are repeatedly running into walls, kicking enemies (and the subsequent funds) off screen, running over (stealing) money that actually stays on screen, and channeling their rage at you, should you happen to be standing between them and their target. Though they can be a proven meatshield at times, especially early on, it would have been nice to have the option to opt out of a partner entirely in certain situations. Still, even when they are acting completely dumb, they can still distract enemies in rather tricky situations, and the inclusion of this feature is neat to see in a title from the Famicom era.

Like River City Ransom, the plot is progressed through beating enemies to a pulp, though the task isn’t as easy as it once was. In River City Ransom, each map had a chance of spawning a pool of gangs. Here, individual gangs are tied to a single zone at a time, traveling between areas in a Hammer Bros fashion from Super Mario Bros 3. Though they are marked on your world map, you have to track them down before they move elsewhere. This becomes an issue quickly, as enemies can change zones as you change zones, meaning they will not be in the same area as before if you have to travel multiple zones. Realistic? Sure, but fundamentally it fails due to the feeling that you’re one step behind in your pursuit of the opposition.

Compounding this issue is the world itself, which is bit of a burden to navigate. Unless you have a real grasp of how each zone connects to one another – I don’t, even after playing for several hours – you’ll feel like you’re wandering aimlessly rather than going where you should be. Perhaps this was meant to go hand-in-hand with the natural progression of the game, though, since a journey with fewer fights (compared to RCR) and the lack of stat-increasing food means you’ll have to grind – a lot – to succeed. So, why not roam the numerous cities, countrysides, marshes, and even frozen wastelands in hopes of running into something useful? I’m all for grinding, but give me some more consistency instead of having to rely on luck to run into the enemy. 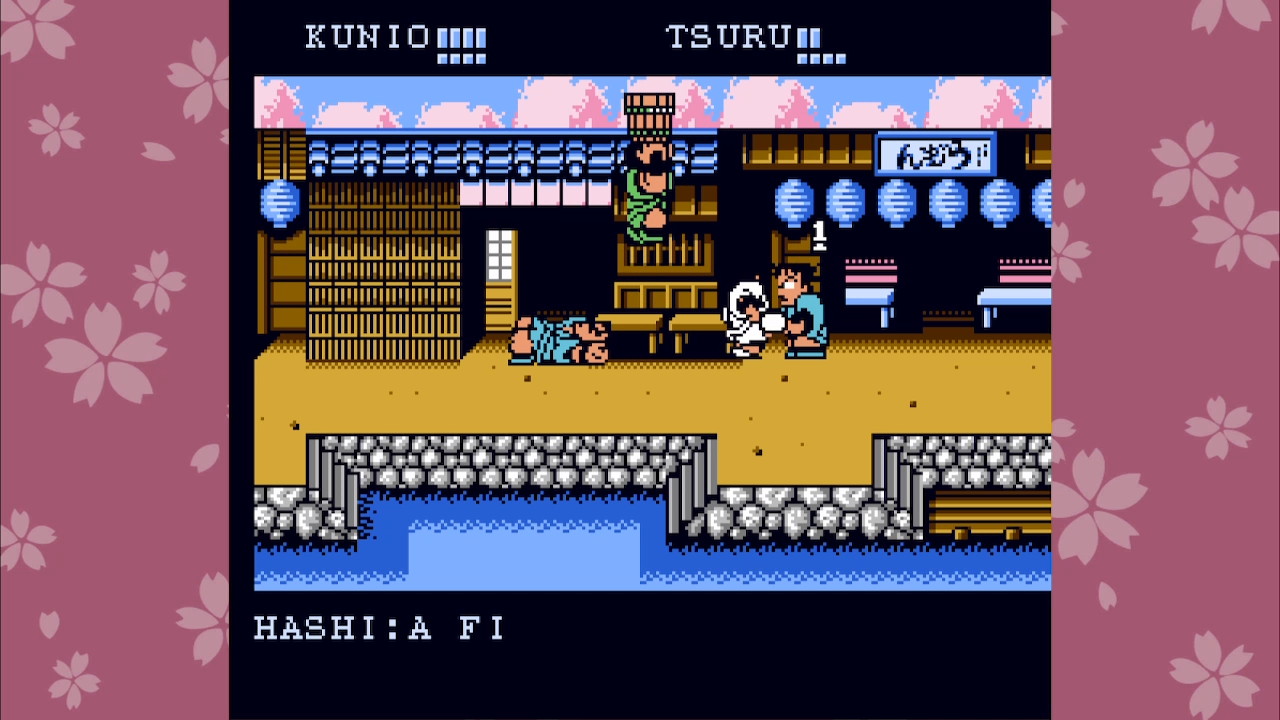 Kunio-kun titles have an extremely consistent aesthetic across their library, and that includes Downtown Special Kunio-kun’s Historical Period Drama. The key difference here is the emphasis on more historical Eastern design – a clear, but effective, departure from the more urban approach of River City Ransom. Consistent with other Kunio-kun titles are the various, often hilarious character animations displayed as you wail away on enemies. Characters also mouth their lines in scripted events – a clear upgrade from the early days of the franchise. Toshiko Tasaki takes the conductor’s stand in place of Kazuo Sawa this time, and while both composers are talented, the air of magic ever-present in the River City Ransom soundtrack is somewhat missing from this outing. Still, the music does compliment the Eastern theme well enough.

This Double Dragon & Kunio-Kun bundle not only features a host of excellent games, it also provides some improvements and quality-of-life additions not found in their vanilla counterparts. Every game can be played either locally or online, though, as previously mentioned, the times I checked the latter there were no lobbies available. Some games, including this one, offer two versions – one being the original experience and another with various bug fixes and performance enhancements. Save states are also a worthy addition here, though both the Japanese versions of this game and River City Ransom feature built-in saving, should you prefer a more pure experience.

Downtown Special Kunio-kun’s Historical Period Drama is, no doubt, a significant leap in ambition for the – in my opinion, underrepresented – beat’em-up RPG subgenre, but ambition doesn’t necessarily equate to a superior product. While it’s clear that some changes here are for the better – vastly improved combat, visible damage numbers, and the change of scenery – other additions can lead to frustration; like the A.I., and constant (often fruitless) pursuit of enemies. Collectively, this adds up to a Kunio-kun RPG experience that is worth a look – more so if you plan to play with another person – despite failing to live up to the legacy of its predecessor.