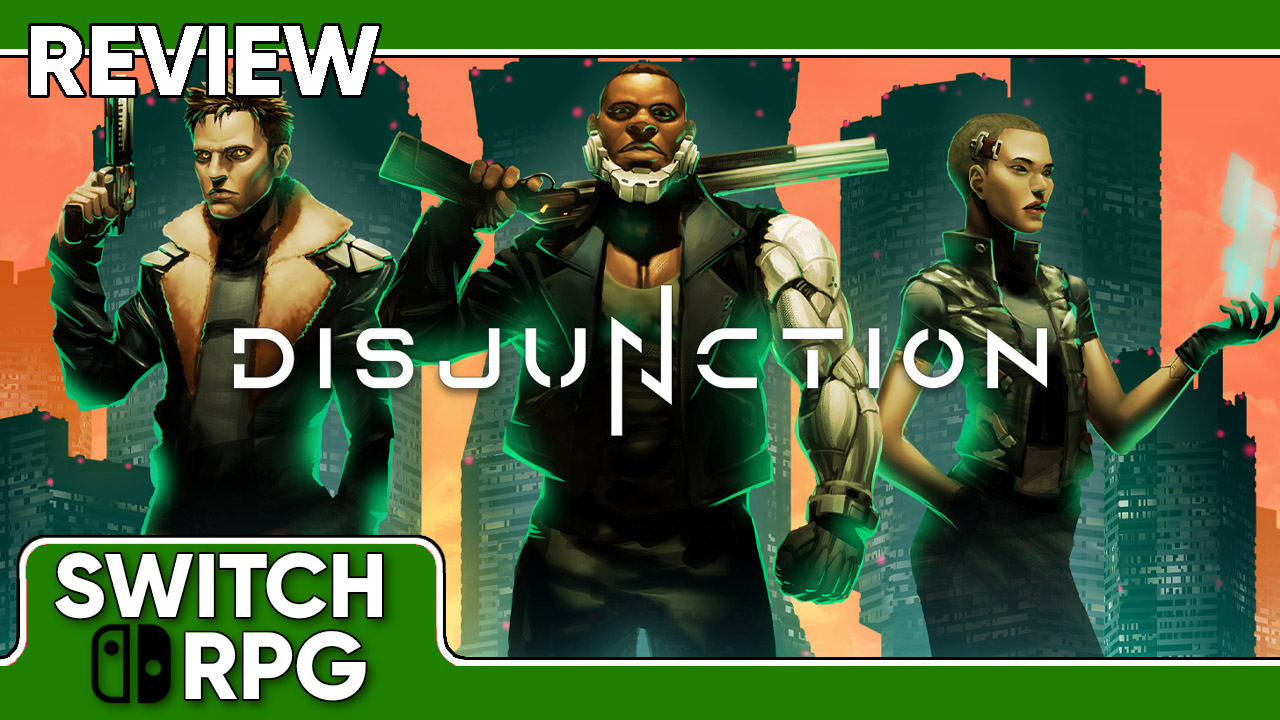 Stealth games are the types of games that tend to sound better in theory than in actual practice. A delicate balance has to be struck between “believable enough to not break immersion, yet not too difficult to deter potential players.” Disjunction is an indie stealth game that aims to take a stab at the genre…but how does it stand amongst the other stealth games before it?

Disjunction takes place during 2048 in New York City. A new territory known as Central City appeared years ago that houses those that are not able to afford living in the city. As such, it’s treated as its own territory and operates under its own jurisdiction. However, there is increasing pressure by the public for the mayor to do something about the increasing amount of crime that is happening in both Central and New York City.

There are three different characters in Disjunction: Frank, George, and Spider, each with their own story that ultimately ties back to the main plot. You start off as Frank, who is an ex-cop turned private eye. He’s hired by a character named Sybil who wants him to find information concerning the arrest of a high-ranking community leader within Central City. As you progress, you will eventually switch over to George, a veteran who recently lost his daughter, then finally Spider, a hacker trying to separate herself from her father’s job with the seedier side of New York. 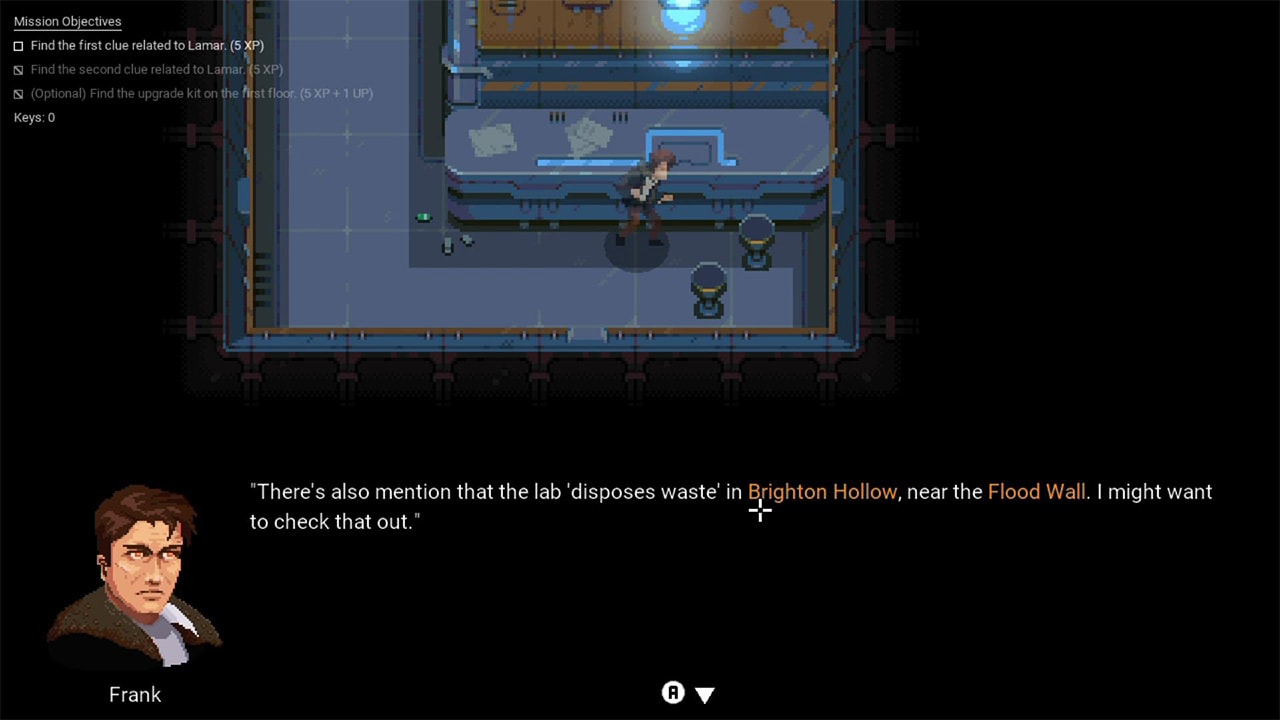 The story is mainly told in cutscenes in between stealth stages. Dialogue sequences can have you choosing between a number of options – some don’t really have much influence outside of a different response, while others can actually affect the outcome of each story. These choices are fairly obvious when they appear, however. Since there is no manual saving, if you wish to see the outcomes of different major choices, you will have to replay the game. Additionally, there is some flavor text here and there that, while unnecessary in terms of getting the gist of the story, does help flesh out the world some more.

Disjunction is a stealth RPG where you can play as multiple characters. Each character has their own abilities to make navigating a stage easier. Frank, for instance, has a smoke grenade that obscures the vision of nearby guards for a few seconds, George can charge towards an enemy to get a preemptive attack, and Spider can go invisible for a few seconds. All abilities are situationally useful, but require energy to use. 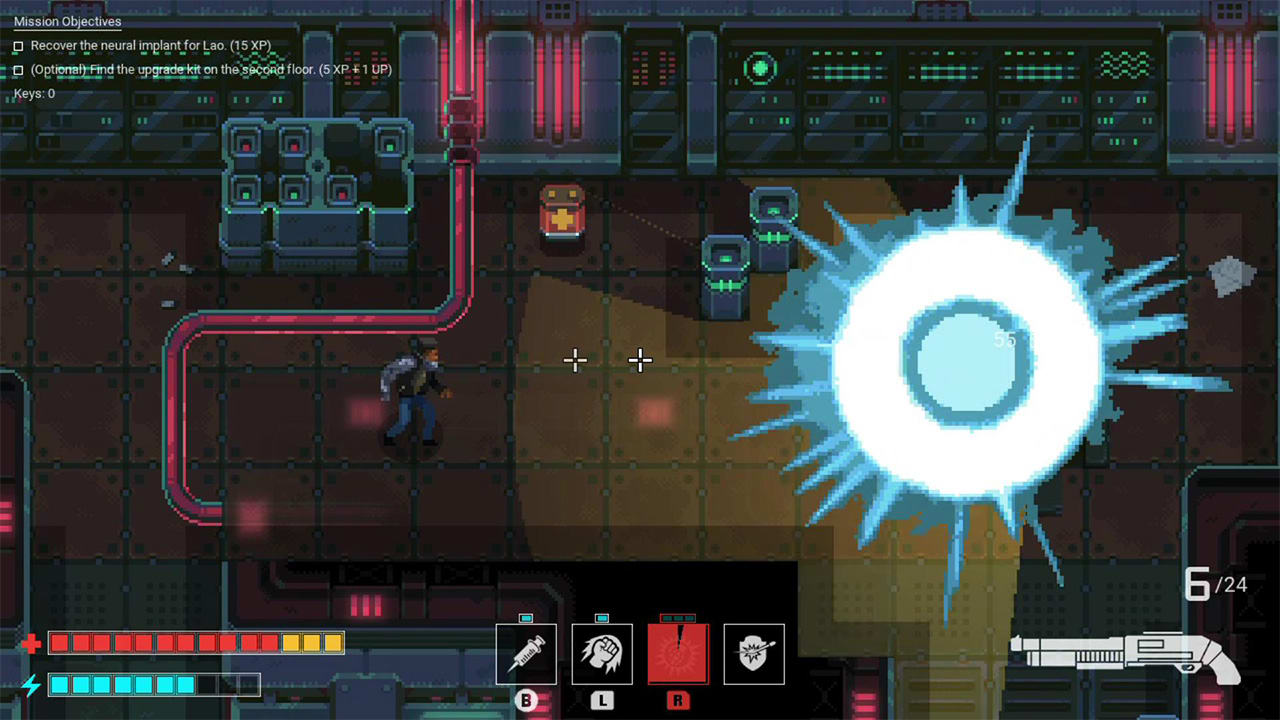 With stealth being your main objective, you have a crouch option that you can toggle with the X button. If you are not crouching, your footsteps will make a noise, alerting all nearby guards to your presence. Along with this, all guards have yellow cone indicators which show the danger zones. If you stand in these zones for too long, all nearby guards in that room are alerted and will start to attack you. At this point, you will either have to defeat all of the enemies in the room, or die (which will more than likely be the outcome). Some enemies will remain stationary, while others will move around the room. As you progress, enemies will increase in both numbers and power. 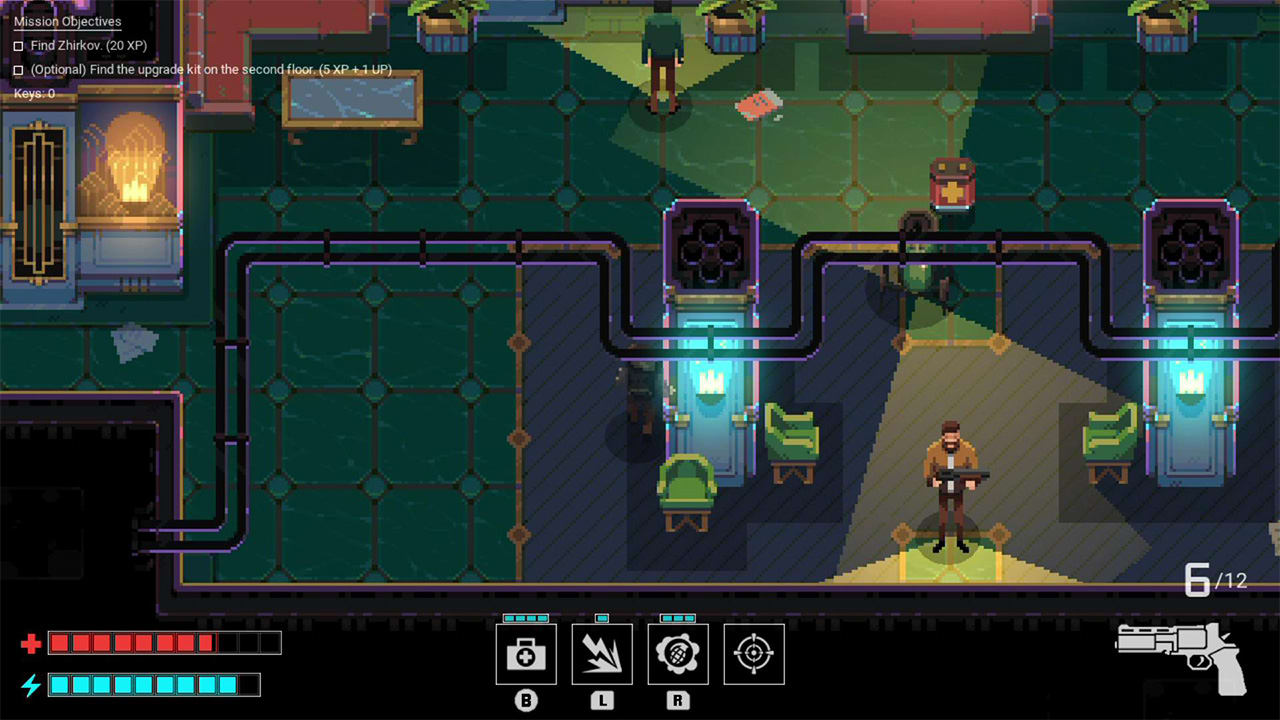 If you happen to die during a stage, you will be taken back to the last checkpoint. A checkpoint is designated by text in the upper righthand corner, also saving the g ame. This checkpoint occurs either when you enter a new floor of a stage, activate a save pad, or enter a new cutscene. There is at least one save pad per floor for you to save on, but keep in mind that once a save pad is activated, it can’t be triggered again. So you’ll need to think carefully about whether you want to save at that particular moment, or take the chance at saving later on that current floor. 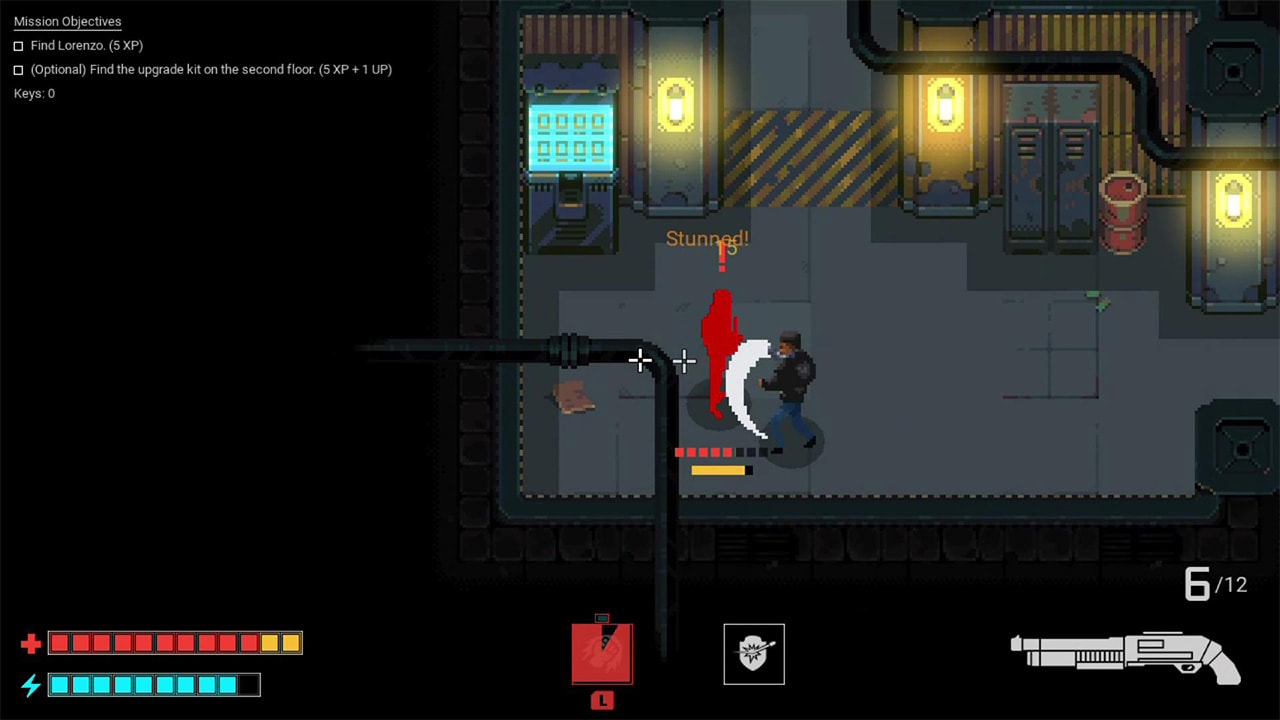 The entire game uses pixel art for both the environments as well as the character models. The stages look amazing and feature a great attention to detail. Some of the stages do blend together, however, since you are mainly navigating through buildings and warehouses. Also, each character has their own character sprite models that do a help with further characterizing both the main and supporting casts. 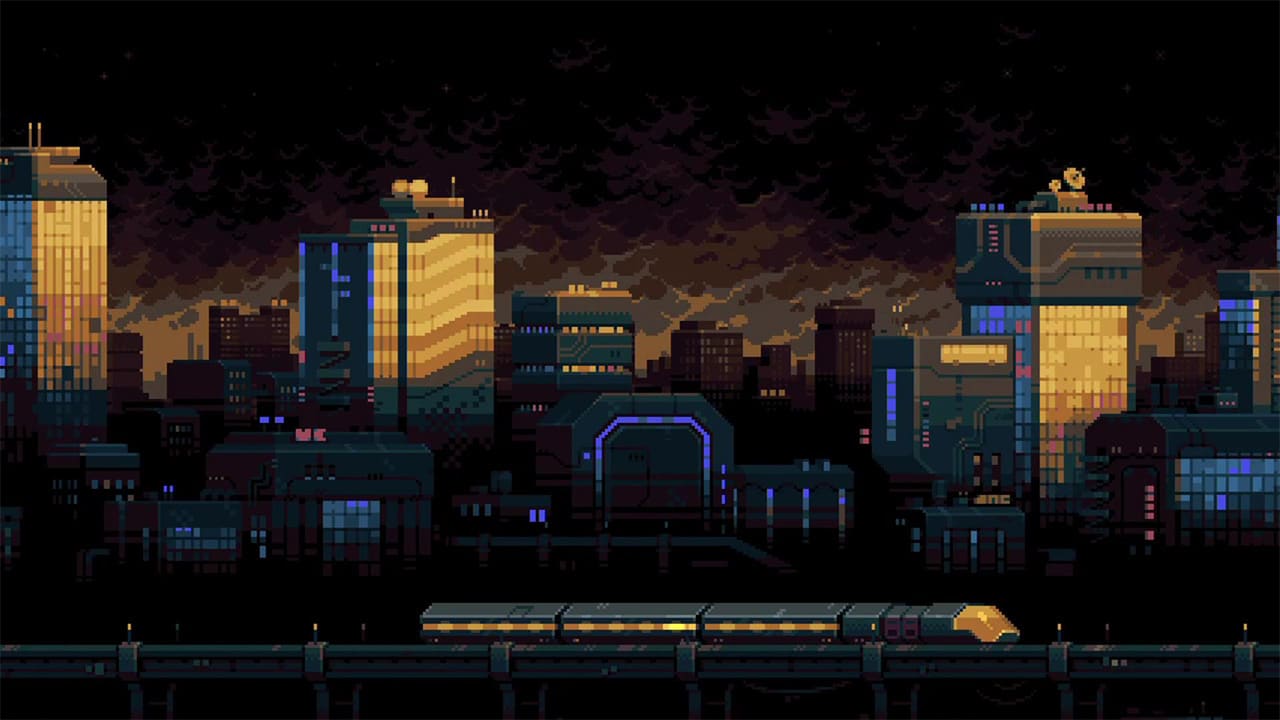 Unfortunately, Disjunction falls into the same pit that many other Switch games have: small text. This, paired with occasional lengthy bits of exposition make it difficult to read through everything comfortably. The navigation of pulling up text for keywords during cutscenes is also pretty finicky and would have been better suited to a button press rather than having to target it with the left analog stick.

Disjunction can be frustrating at times, but is equally satisfying when you end up finally completing a stage. The addition of different abilities makes each character unique in their own right, although it is very easy to default to just using their non-lethal attacks to navigate through the stages. I did also find it kind of funny how you can use a non-lethal attack on a guard and no other guards will be alerted, even if they’re standing within arms length away.

Some of the checkpoint locations did feel a bit inconsistent. Sometimes, you’d run into a save pad in the middle of exploration on a floor, other times, it may be right near the entrance or exit. On top of that, having to completely redo a floor if you happened to get unlucky during a run does lead to quite a bit of frustration. That being said, Disjunction is a pretty fun stealth game. Slipping by enemies at the perfect moment can be very satisfying, but even when all else fails, there isn’t much that a whack with a baton won’t fix.