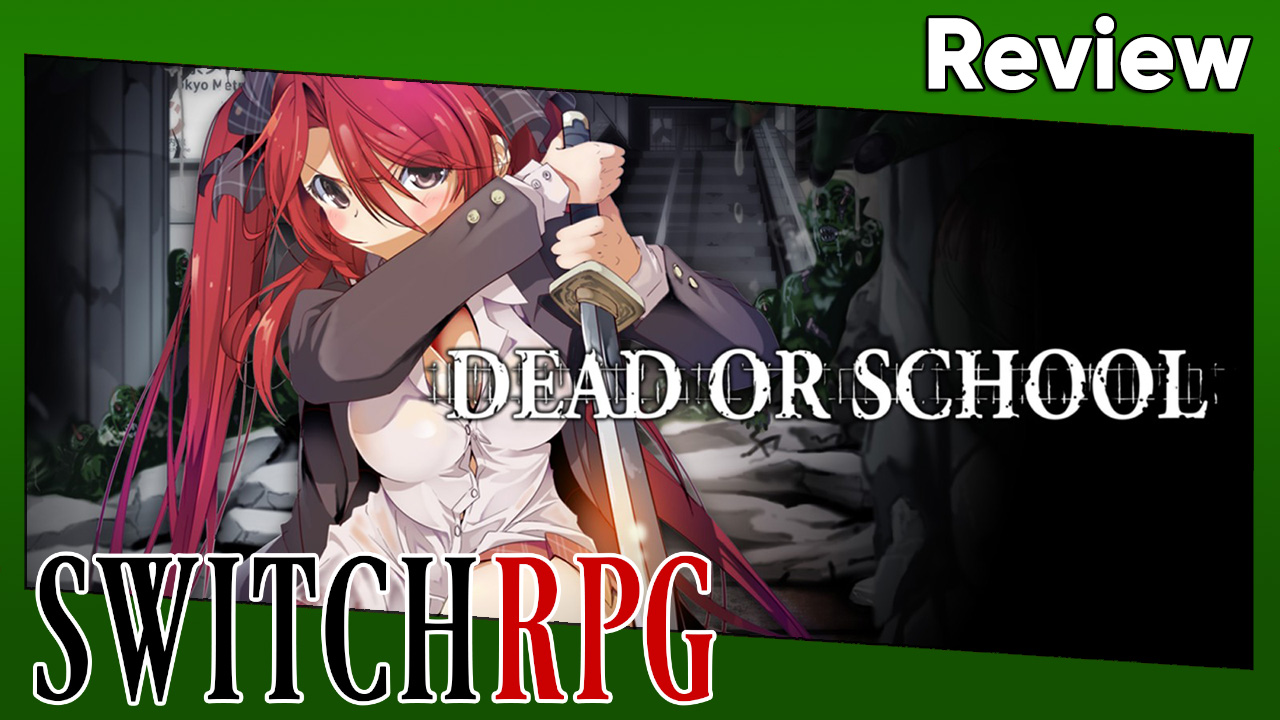 The term “hidden gem” is thrown around callously in these days of an indie-heavy eShop. We all seem to have at least one (maybe a few) indie titles that we love, one that we never pass up an opportunity to boast about to our gamer friends as it is very likely that they haven’t heard of it at all. Other times, we tend to simply equate “hidden” as “only available on the eShop.” Around this time last year, I found my favorite: Rainbite’s “Reverie: Sweet As Edition” was pure, lighthearted fun built upon the foundation of a child’s imagination. The Zelda style gameplay and Earthbound-esque dialogue will always hold a special place in my heart- you can check out the review here. That being said, it’s been a number of months since an indie title has gripped my heart. Lo and behold, Dead or School has ended my indie darling drought. Read on to find out why!

Right when I was beginning to become completely burnt out on Metroidvanias, Dead or School burst through the genre door with new life. It’s better served to describe this game as a “2D Bayonetta,” due to some lightning-fast hack and slash elements combined with varied gunplay mechanics. Doubling down on that Bayonetta comparison, Dead or School includes very handy evasive maneuvers that allow for a brief time slowdown for Hisako to deal out substantial damage. Fans of action-oriented franchises should adapt to this mechanic like it’s second nature. Unfortunately, there are some technical issues that show here as the game becomes very sluggish during these instances. Protagonist Hisako has three combat options available at all times. The aforementioned melee and gun options combine with a third explosive launcher, and each can be switched with a press of a button. While each of the 3 options tear through the mutants of underground Tokyo pretty much the same, it’s advantageous to use one over the other in certain boss battle situations. 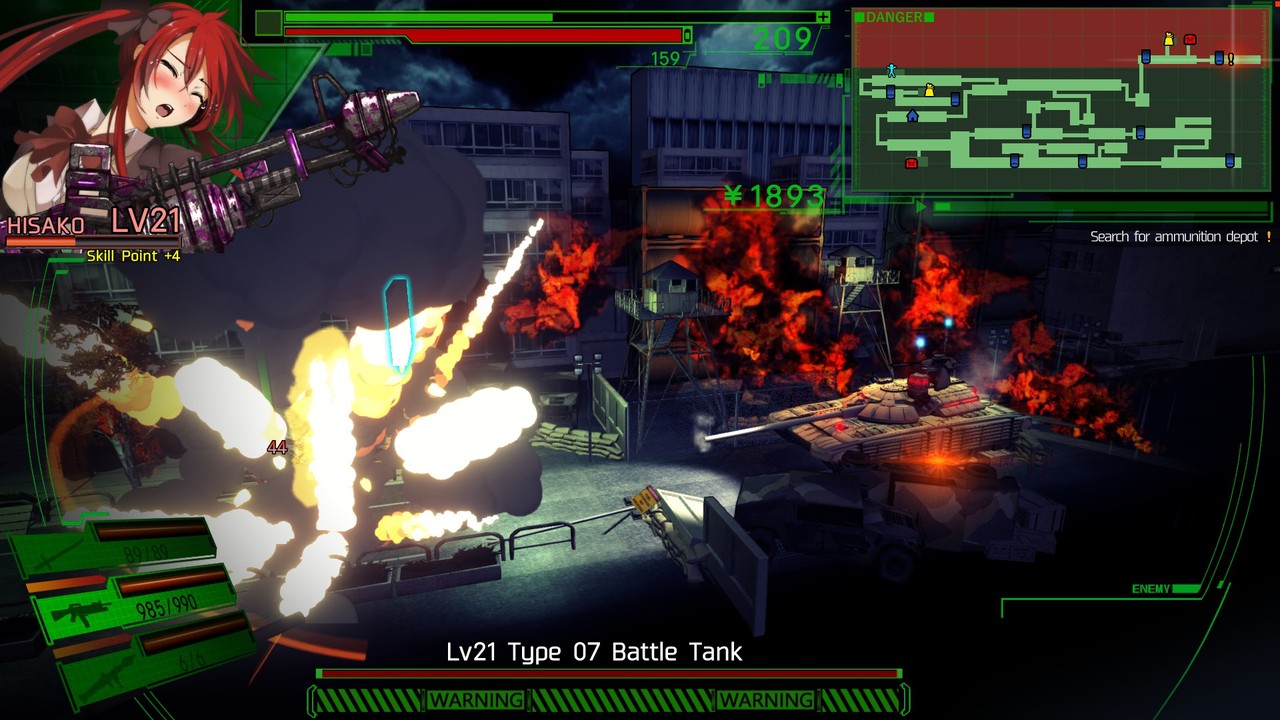 Hisako may gain new weaponry through Dead or School’s very deep loot system. Killing mutants always results in treasure drops, which vary from weaponry to inventory items to upgrades for said weaponry. Upgrades have a wide variety of perks, and more stages of any particular upgrade can be unlocked as you progress until the augmentation is maxed out. It’s not a very deep progression system, but it does feel rewarding. The deeper variations come in the form of the weapons themselves. Quicker katanas and pipes deal quick, pinpoint strikes that whittle away at mutants from a distance . Hammers, axes, and the like deal massive jolts of single strike damage. Machine gun ammo essentially works as one might expect. Normal augmentations can speed up firing rate, while some special upgrades will tear through mutant skin quicker.

Hisako and her friends are the 3rd generation of human survivors of the Human vs Mutant War, which took place nearly 100 years ago. The remaining humans have chosen to shelter underground their old beloved city of Tokyo while the mutants freely roam the streets on the surface. Teenage angst gets the best of Hisako’s friends, resulting in the irrational choice to venture to the dangerous surface. This leads to the foolhardy teens being predictably attacked by mutants, one chomp away from becoming mutant food when Hisako steps up and saves the day.

The teens proceed to tell Hisako that taking the surface back is the only way that humanity could ever be free. as underground life is boring. This dialogue leads Hisako to have a conversation with her grandmother, who informs her that, while people don’t remember much about the surface anymore, she remembers going to a place where children would gather to learn and play. She even has the outfit that she used to wear when going to her favorite place, called a “school.” The twinkle in Hisako’s eye leads to her grandmother to conclude that Hisako is the perfect candidate to rediscover the best of humanity’s creations forgotten on the surface. With this, Hisako is gifted with her grandmother’s school uniform and sets on a journey to… well, go to school, and maybe find out the truth behind the Human vs Mutant war along the way. 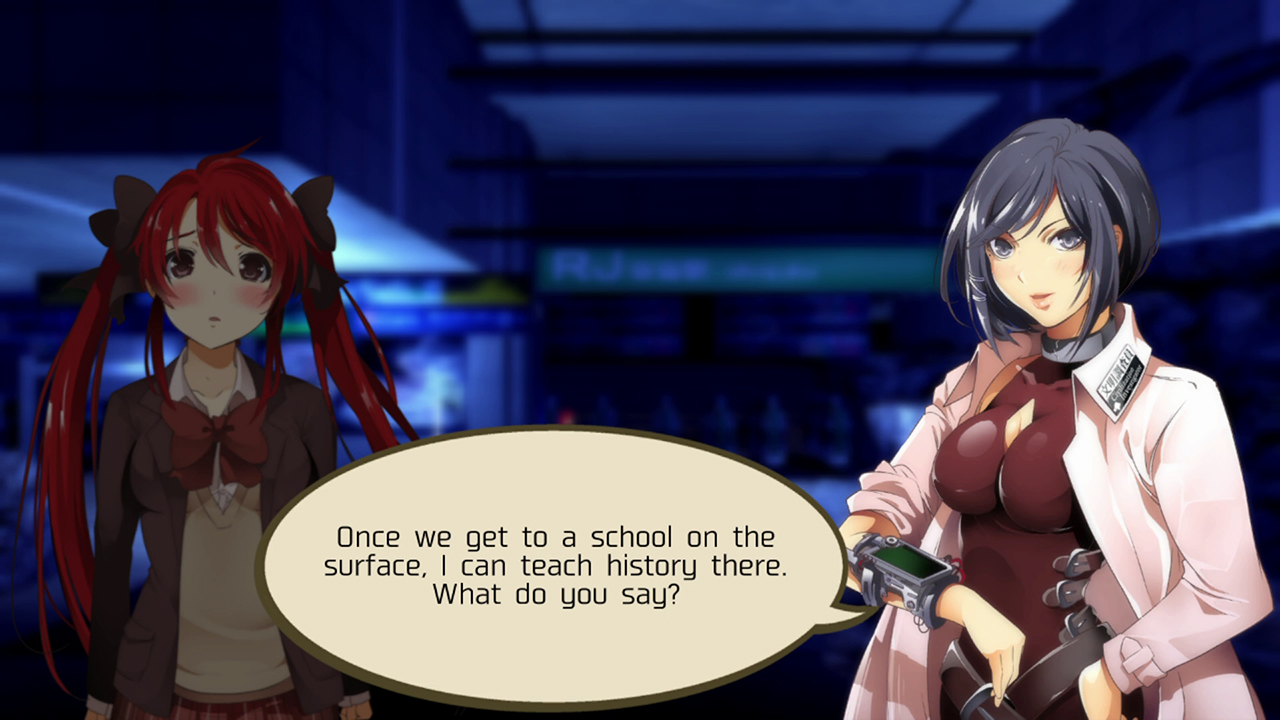 This story may be a bit overly naive, but it’s certainly creative and manages to keep the player invested. What starts out with a simple goal does evolve into something much more complex as Hisako advances through the underground levels and meets more inhabitants and survivors. Information is paced out smoothly with small side quests to complete that add even more to the narrative, if you should wish to stray from beaten path from time to time.

This is a lower-budget title, so it’s probably unfair to expect the most polished HD graphics. Dead or School isn’t an ugly game at all, but the most flaws appear in its aesthetics- especially in handheld mode. The cutscenes will remind you of some of the PS1 greats from the late 90s, underwhelming for some, but not much of a problem for me, personally. The inconsistencies witnessedd during the time-slowing phases are the most perplexing, with frame rate drops during the literal slowdown. 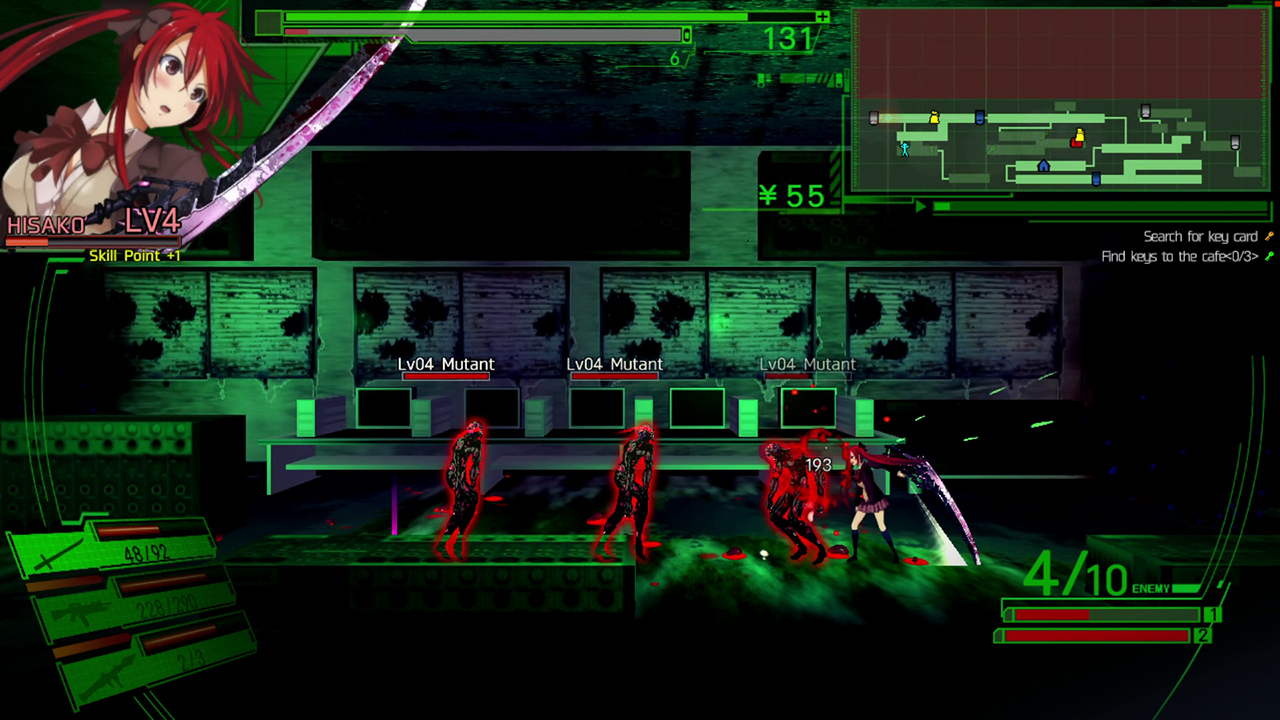 Searching for a game with graphics comparable to those of Dead or School, the one that resonated in my memory the most was Crisis Core: Final Fantasy VII. This comparison to a first generation PSP game isn’t a nitpick, just to be clear. I just want to provide readers with an idea of what this game looks like in-motion, should that be a factor in your purchase. The game also features some sharp, hand-drawn, anime-style stills during dialogue phases. This is also where the game takes on some subtle adult themes (as if slashing through mutants wasn’t enough). Apparently Hisako’s grandmother’s school uniform was one that could’ve been purchased from the local lingerie shop. If you choose to play around children, take heed: there will be jiggle.

I had a ton of fun with Dead or School. While the graphics or cutscenes may not be anything to celebrate, the gameplay progression and weapon customization scratched a completionist itch for me. The game is worth the price of admission on the eShop, providing Switch owners with a solid 25-30 hours of fun to go along with a heartfelt, albeit simplistic story that seems naive in the beginning, but builds depth quickly. Do yourself a favor and check out my early pick for best indie title of 2020 so far.