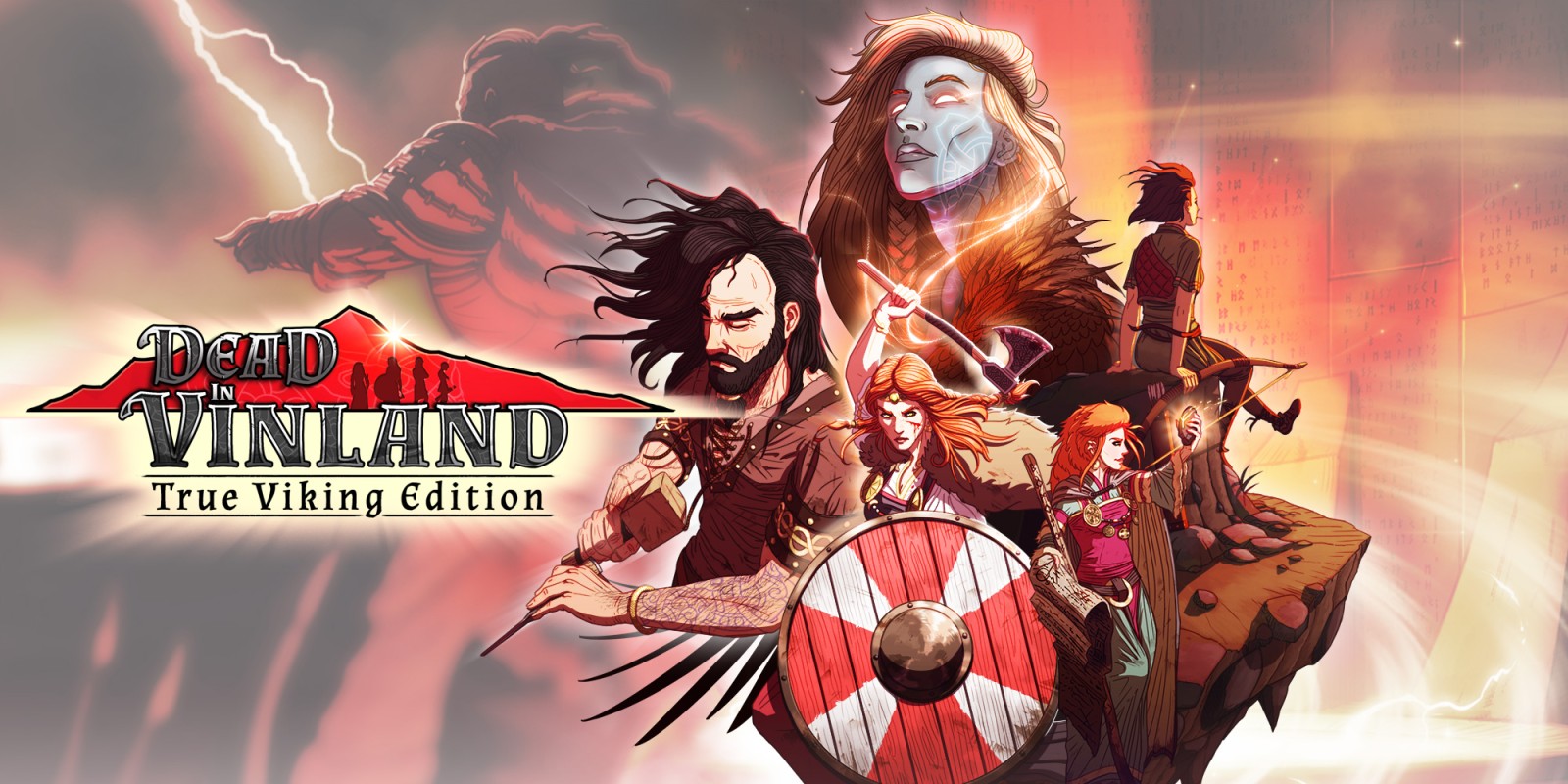 Ah, strategy games. I once told a fellow writer that I continue to occasionally try this genre just to make sure that there isn’t something wrong with my own gaming tastes. So many other gamers adore titles from this RPG subgenre, it seems only fair that I should occasionally branch out of my comfort zone, right? With the nearing release of Dead in Vinland, I asked myself, “what could go wrong?” Read on to find out. 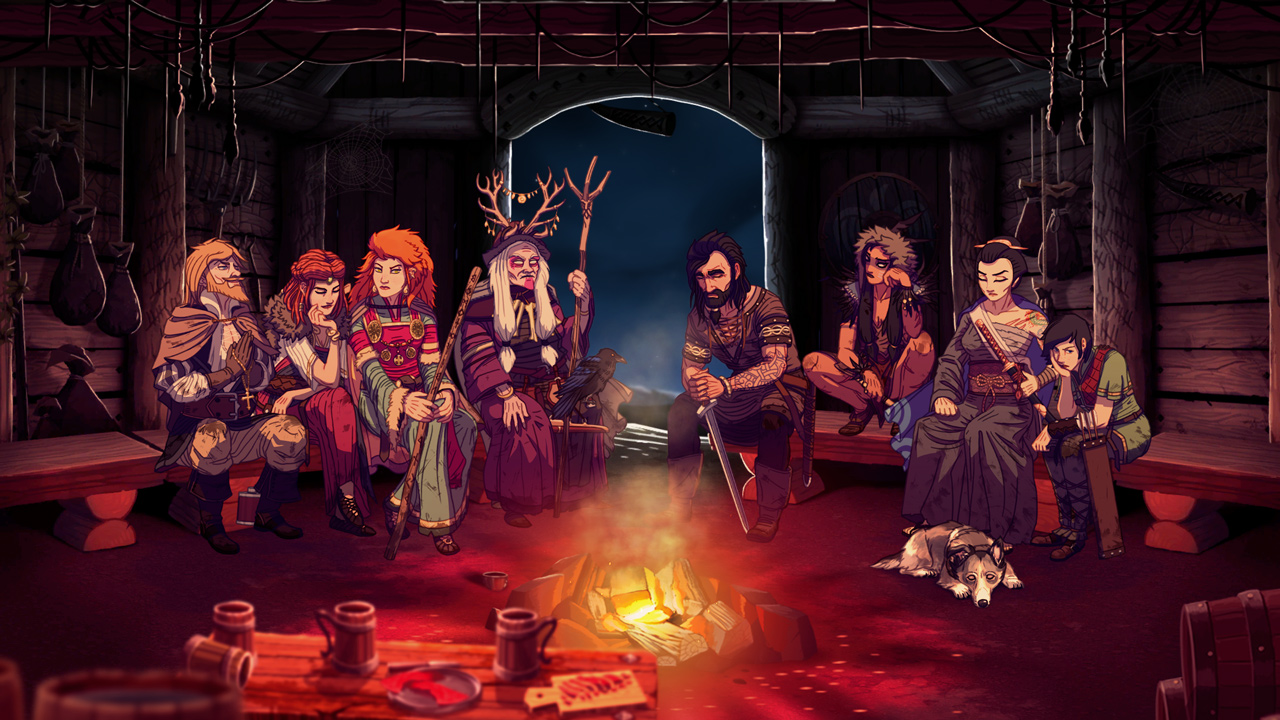 First off- Let’s give credit where credit is due: the art of Dead In Vinland is gorgeous. The hand drawn, cel-shaded visuals pop off the screen in beautiful high definition. Colors and lines are drawn exquisitely and are a pleasure to view. Each character of protagonist Eirik’s family has a uniquely Nordic design, and the island looks as beautiful as it is dangerous. There isn’t much to speak of in terms of animation, as Dead in Vinland mostly plays out in a series of hand drawn still shots. Battle screens are similarly high-detailed, but your characters are once again inanimate in this setting. Though the character art and visual style are extremely impressive, it’s a shame that these visuals were limited to something akin to flipping pages of a digital book.

The story begins as Eirik and his family are suddenly attacked in their home village by a group only known as “Thor’s Hammer.” In a desperate attempt to escape with his wife, daughter, and sister-in-law, he boards a boat with them and braves the troubled ocean. The family comes ashore on an island that nary a Norde has ever ventured far enough to explore. Though it’s never actually stated, we are left to assume that this is the titular island of Vinland. The specific location of the island is also never stated in the game, but traditional Nordic lore traces the land known as Vinland to somewhere off the coast of North America- specifically, Newfoundland.

Eirik and his family are tossed out of the frying pan and into the fire, unfortunately. The family is tasked with surviving on a completely unfamiliar island with absolutely nothing to their names- with the exception of the soaked clothes on their backs- and it’s far from easy. The group will encounter hostile inhabitants and deal with a myriad of afflictions. Exploring the island becomes essential to survival, as the family will need a continuous stream of materials, food and potable water. 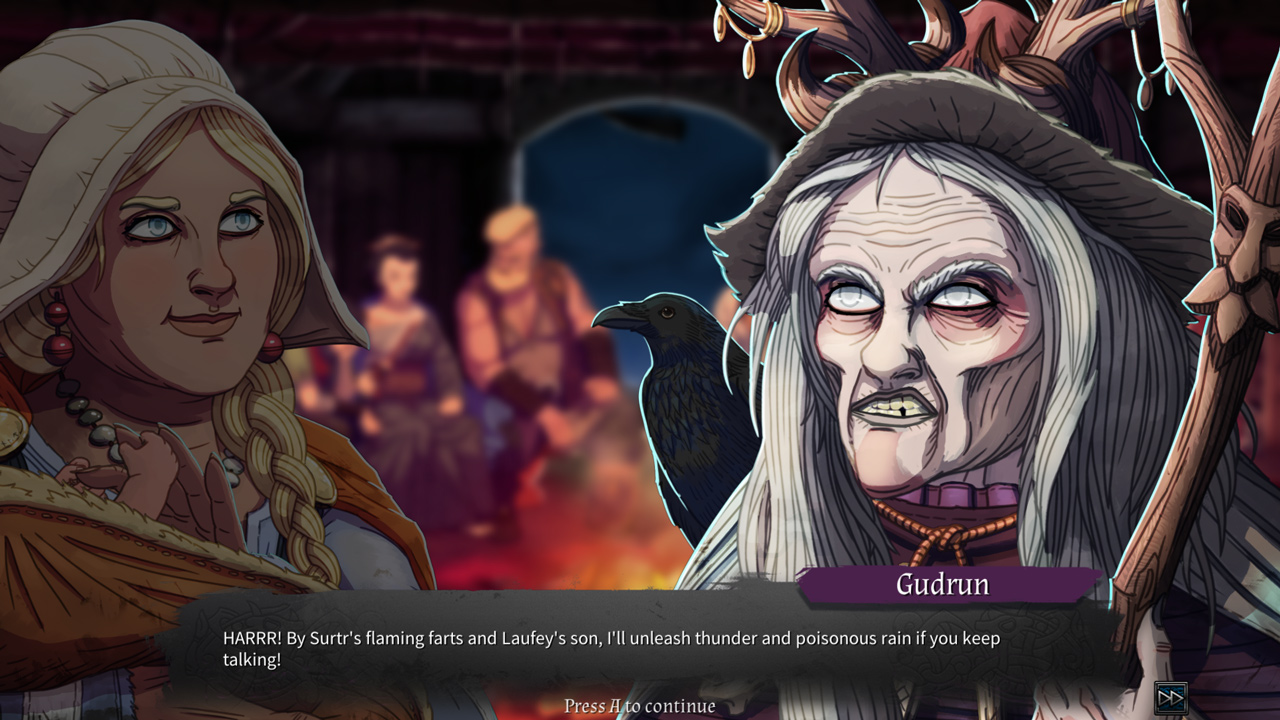 Most character interactions offer branching dialogue choices. The intended effect of each dialogue exchange is unfortunately very vague, however. There were numerous occasions in which I thought I’d be choosing the “nice” answer only to lead to an increase in the extremely annoying “depression” stat. This has little effect on the story, with the exception of getting a game over if the depression stat reaches 100 (the same goes for all other stats of affliction). It was just very frustrating to grind through the necessary procedures required for the family to be warm, safe and fed only to have a very ambiguously telegraphed dialogue choice lead to an increase in depression.

To make matters worse, the family will encounter the ferocious island inhabitant “Bjorn” and his cohorts very early on. Bjorn will utterly destroy your party and then require a weekly tribute going forward. From this point on, you’ll need to gather even more supplies and allies in order to keep your camp in order and somehow manage depression. These are grueling and frustrating tasks, to say the least (it is survival after all), but if you manage to adapt and overcome, you just might get another shot at Bjorn. 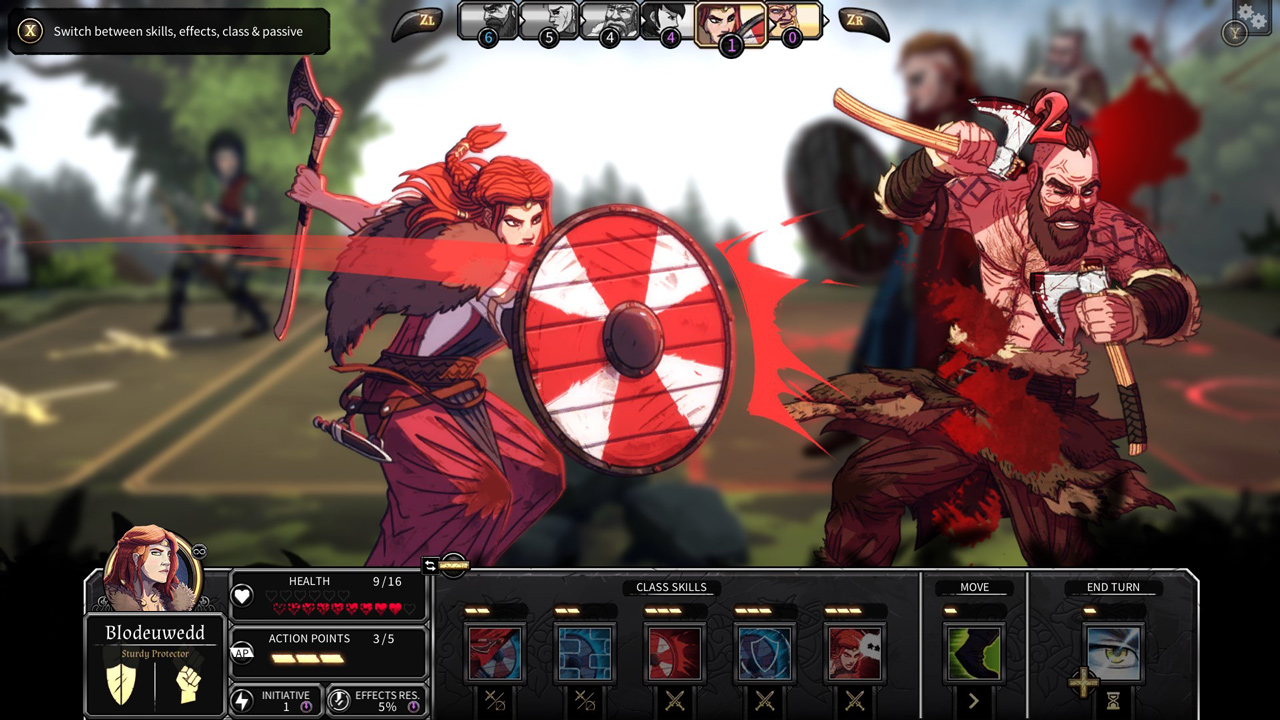 Dead in Vinland is a survival strategy game at heart, but there are certainly RPG elements at play here. The first 20 minutes serve as somewhat of a crash course on what to expect, though the introduction is a bit overkill, if I’m being honest. In a matter of minutes I jumped from tactical strategy to survival to turn based combat. It’s a load to take in, but the tutorial holds your hand through the process. Once it lets go, however… you’re left to navigate the tricky menus and make decisions on your own. Even after an extended period of playtime I still found myself fighting the menus. In my opinion, touchscreen functionality would have made for a much more streamlined experience. This isn’t the game or the developers fault, however, as they give you the best control options the Switch has available.

Combat is where Vinland starts to feel like an entirely different game. Battles take place on their own screen, with allies appearing on one side of the screen and enemies on the other. Each battle is turn-based, so the player has time to think through their next move. The battle field has 2 separate rows of spaces, and it is generally advantageous to have a melee fighter in the front and a ranged attacker in the back. The party will learn different buff effects with experience, which are extremely useful for melee fighters during the very difficult boss battles. Weaponry consists of the RPG essentials, such as swords, axes and bows, and each character within the family can be a specialist with one. 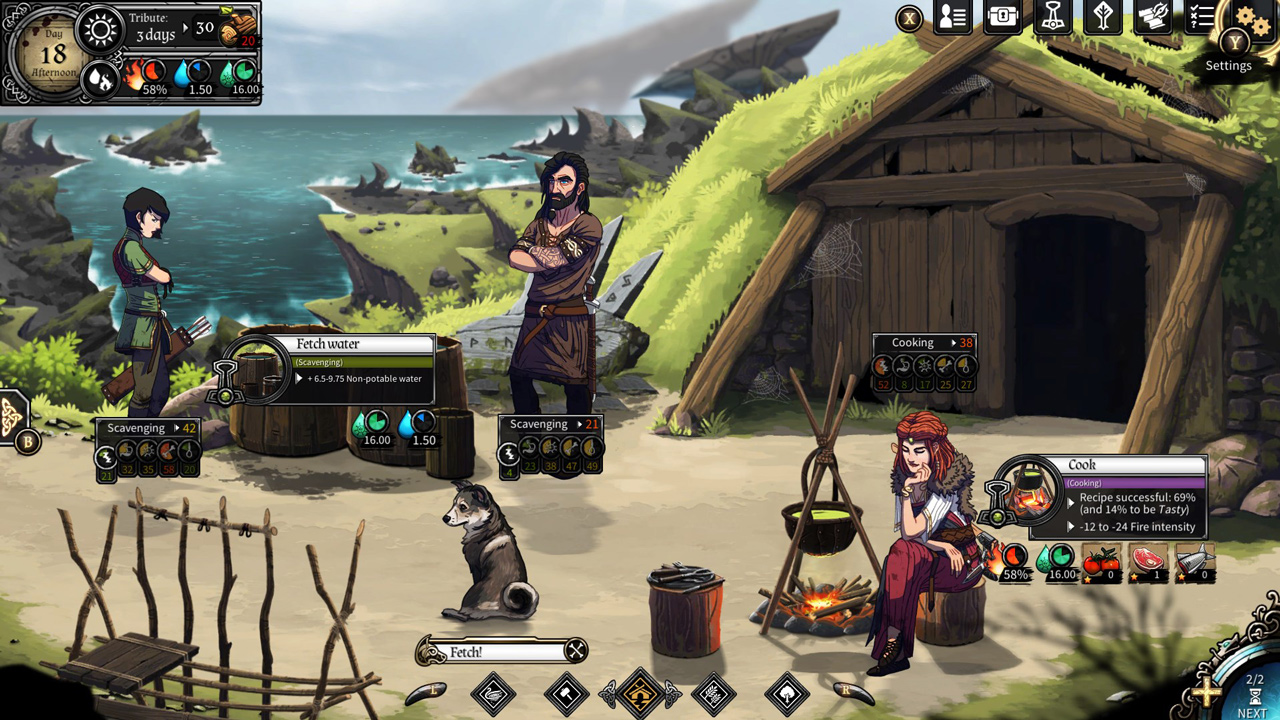 Outside of battle, the remaining majority of Dead in Vinland consists of designating your group to specific tasks in order to ensure survival. Each character can perform 2 tasks per day, and survival is a nonstop grind. You will relentlessly forage, hunt, craft, and gather water for your small village. Failing to adequately provide any of the above resources can result in injuries, sickness and (most assuredly) depression. Each ailment has a resource that can be harvested for remedial purposes at the end of the day. Once you’ve gathered all possible resources for the day, the group will sit and discuss events and topics by the fire. This is where the majority of the top-notch storytelling takes place, though be prepared to jump through endless hoops to get another fruitful tidbit. 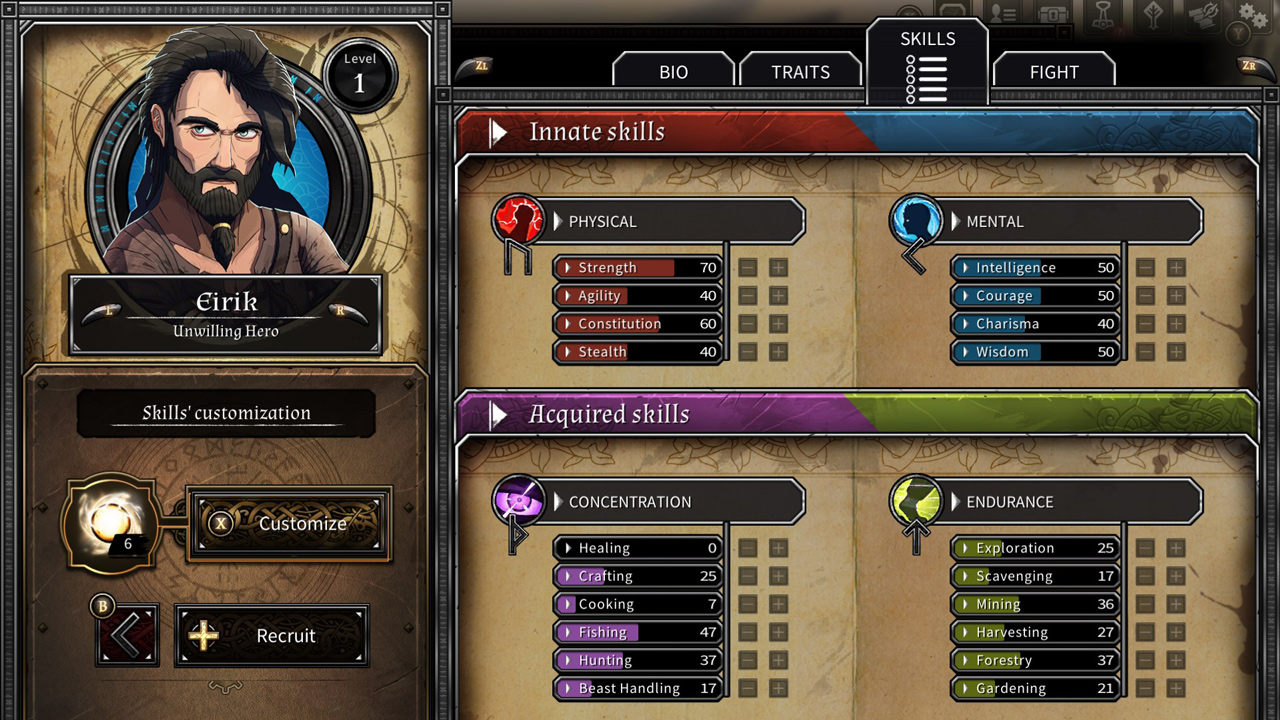 I don’t think I would be off-base by stating that developer CCCP crafted the precise gaming experience they set out to create. Survival situations are realistically tedious, as are the depression mechanics. It’s very likely someone ripped out of their homelands and forced to survive on a hostile island would struggle emotionally. The issue- from my perspective- is that this experience simply is not fun enough. Do you feel a sense of pride after bringing your family back from the brink of death? Sure. Do you feel a sense of accomplishment after grinding to make sure everyone has the resources they need to stay as healthy as possible? Absolutely. Did I have fun doing it? Not much, unfortunately.

The “True Viking Edition” of Dead in Vinland on Switch offers the player the most bang for your buck, due to the inclusion of previously released DLC and some bonus dialogue content. Hardcore strategy gamers could very well fall in love with Vinland, but I feel that the majority of RPG players might be turned off by the constant need for strategic oversight and resource management. Dead in Vinland tells an intriguing tale that is darker than Odin’s Raven itself, though it’s the arduous micromanaging that is regrettably the game’s own Ragnarok.

Tags: Dead in VinlandPlug In Digital