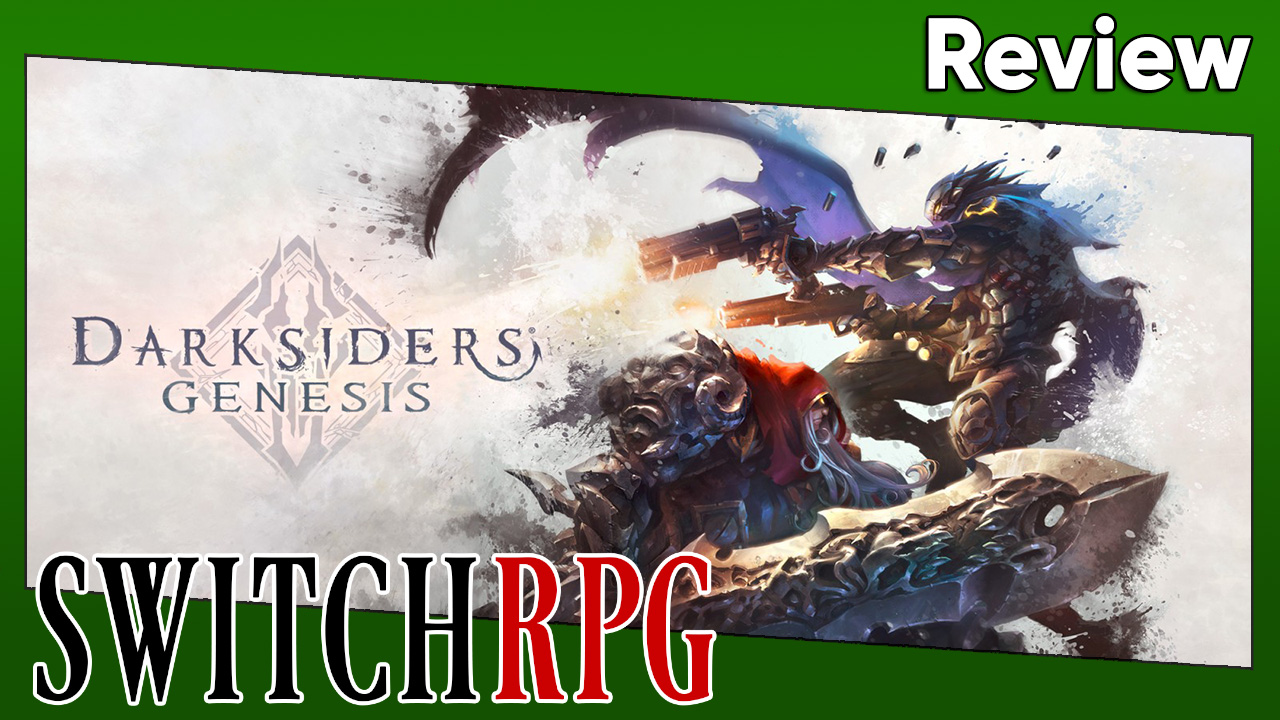 As the Switch continues to gain momentum with third party developers, owners of the hybrid console continue to reap the rewards. In the past 2 fiscal quarters, the Switch offered up releases from third party juggernauts such as The Witcher 3: Wild Hunt and Vampyr, just to name a couple. THQ Nordic’s Darksiders Genesis is yet another prolific third party franchise to grace the Switch, a very welcome addition to a growing library of great titles. 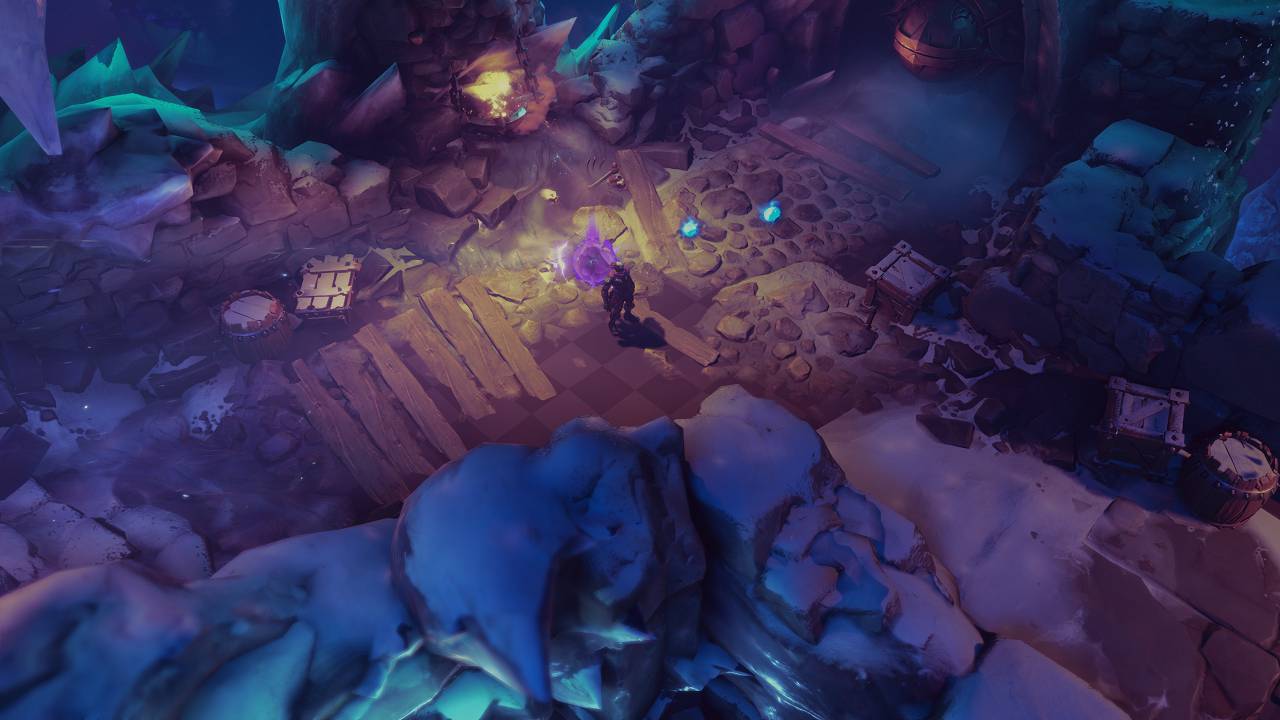 Many years before the events of the original Darksiders, the War of the Nephilim has ended and only the 4 Horsemen remain. The Charred Coucil have decreed that the Horsemen will carry out the necessary deeds in order to maintain the balance of power (and therefore creation itself) in the Underworld in exchange for being bestowed with immense power. It isn’t long before the Demon King Lucifer begins wreaking havoc, however.

It quickly becomes apparent that Lucifer isn’t acting alone. The Council calls upon War and Strife to investigate Lucifer’s mischief and ultimately restore the balance of the entirety of creation. The task becomes more difficult as War and Strife face off with a multitude of “master demons” that have been gifted with stolen power via Lucifer himself. What is Lucifer’s endgame? The answer is presented to the Horsemen by The Demon Lord Samael, whom recently turned down an offer to participate in Lucifer’s grand scheme. The consequences are dire, as Samael finds himself under attack from another demon that chose to accept the Evil Prince’s offer- Moloch.

War and Strife arrive just in time to save Samael and his realm from destruction at the hands of Moloch and his “Blood Mantle.” Unbeknownst to War and Strife, Samael promptly hatches a scheme to use the Horsemen as tools to turn Lucifer’s grand plan against him. What proceeds is a tragedy that ultimately sends War and Strife back to the site of the original bloody battle of the Nephilim, and the home of both Earth and the Underworld’s most valuable resources: Eden. For the one that controls Eden and it’s resources controls the fate of the Horsemen and humanity itself. 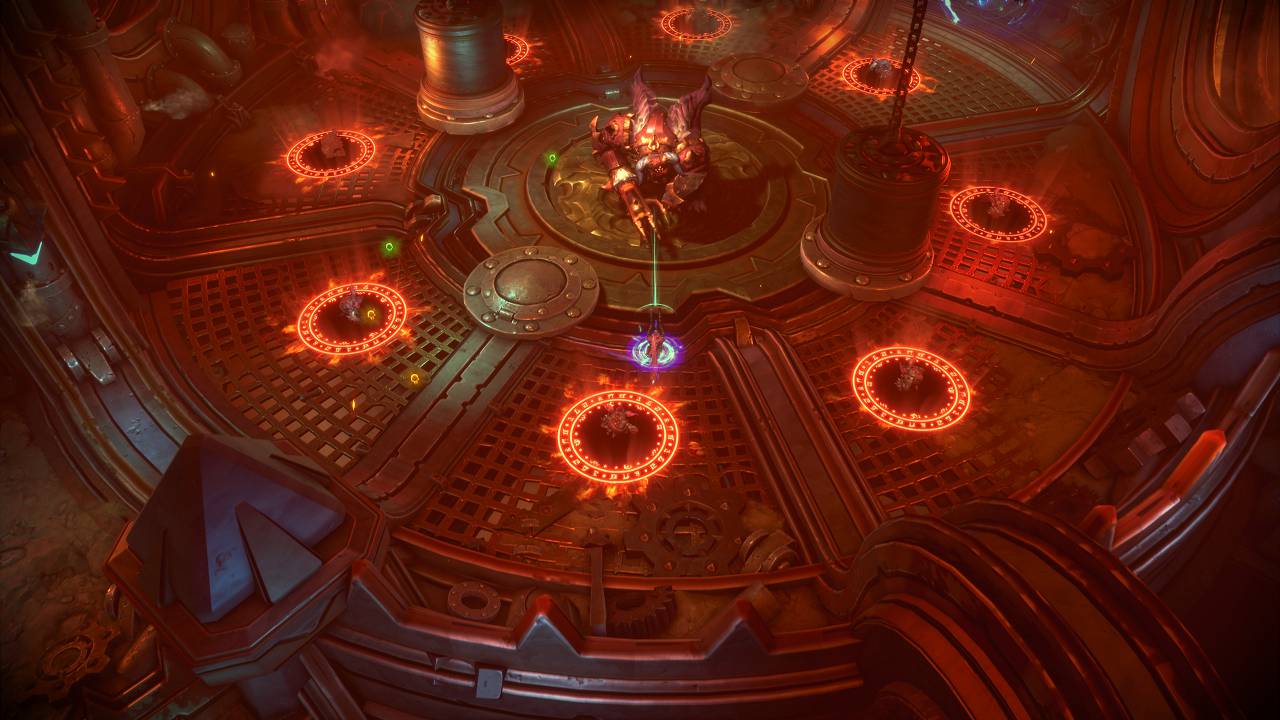 Darksiders Genesis chooses to jettison the franchise’s traditional 3rd party perspective in favor of a new, top-down Diablo-esque presentation. The action doesn’t miss a beat. Strife’s Dual stick gunplay is well-suited and feels completely comfortable in this setting. War’s raw, thunderous power also packs the same satisfying “oomph” that it does in the 3rd person format. Genesis isn’t exactly a graphical masterpiece compared to the previous releases, but it’s still beautiful in it’s own right. I loved Strife’s character design and simply cannot applaud the character’s voice actor enough. The energy he infused into Strife via witty quips and one-liners is a perfect compliment to the ever-stoic and proper War.

The game’s music deserves the same praise as well. The same team behind the soundtrack for Ori and The Will of Wisps presents us with another score that offers appropriate ambience, using tension building drums and synths that climax during epic boss battles. It can be subtle and go unnoticed until you find yourself scooting up closer to the edge of your seat just as you’re set to charge War and Strife into battle. The development team deserves praise for choosing not to spare resources as they attempted to inject new energy into the Darksiders franchise. The investment into the game’s quality of sound pays off in dividends.

Environments in Genesis are surprisingly large for a top down adventure. Each setting makes the path of advancement clear, yet still has enough nooks and branching paths for the player to enjoy some rewarding exploration. The framerate was completely smooth in my playthrough, save for a couple of drops in co-op mode. This would usually happen just as the second player would join the game, with the issue vanishing soon after. 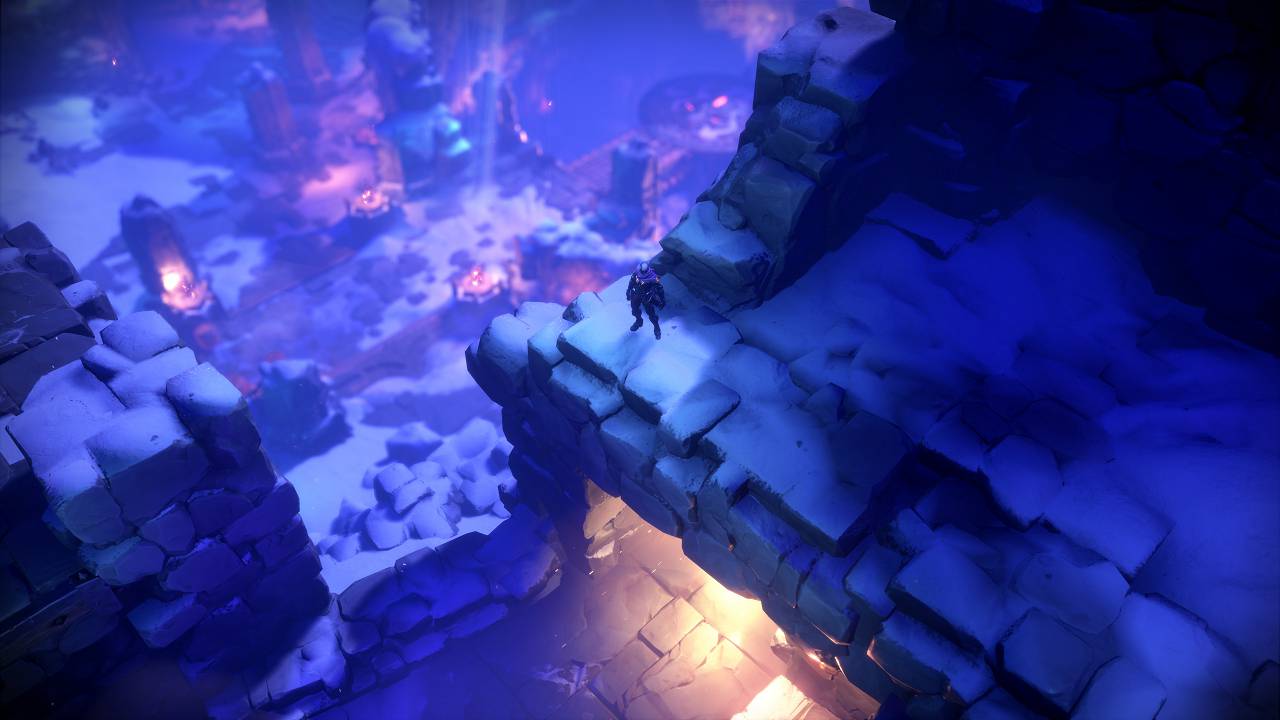 This bold reinvention of the franchise is certainly a risk. Darksiders purists may even hate the change, but I hope it doesn’t scare them away. The top-down style still manages to capture the essence of previous Darksiders entries. It is apparent that the developers wanted to create a fun co-op experience, and the top-down perspective succeeds in making the gameplay all the more seamless and enjoyable.

A second player can jump in any time during gameplay locally or online via “summoning stones.” These stones can be found frequently throughout Genesis, so there is ample opportunity to enjoy this feature- AND YOU SHOULD. I strongly suggest experiencing the co-op gameplay, as it is the most enjoyable co-op mode I’ve played since Warframe. The game does feature a single player mode, however, where the player may switch between War and Strife with a single press of a button at any time, no summoning stone required.

Continuing the trend of Darksiders II and III, the game features simple skill progression for War and Strife. The characters themselves don’t level up, but their particular skill sets do progress. Strife can unlock new ammo for gunslinging demon destruction, while War on the other hand learns new melee attacks, such as vicious finishing hacks or sweeping sword attacks designed to cut down on enemy numbers. New abilities can be unlocked through soul farming, as well as spending “boatman coins” at Vulgrim’s shop to purchase “creature cores” that will unlock the abilities.

While it’s possible to unlock abilities through farming, the creature cores that can be attained at Vulgrim’s Shop seem to be entirely unique, with some being very useful (perhaps necessary) in the game’s later levels. Difficulty spikes in the latter third of the game, though it can remain perfectly manageable as long as your abilities have progressed and you’ve obtained the strongest creature cores. If you do experience a game over, be prepared for some frustration in the later levels, as checkpoints are spaced way too far apart, in my opinion. There were a few instances in which I found myself replaying 30 minutes or more of content that I had already experienced. 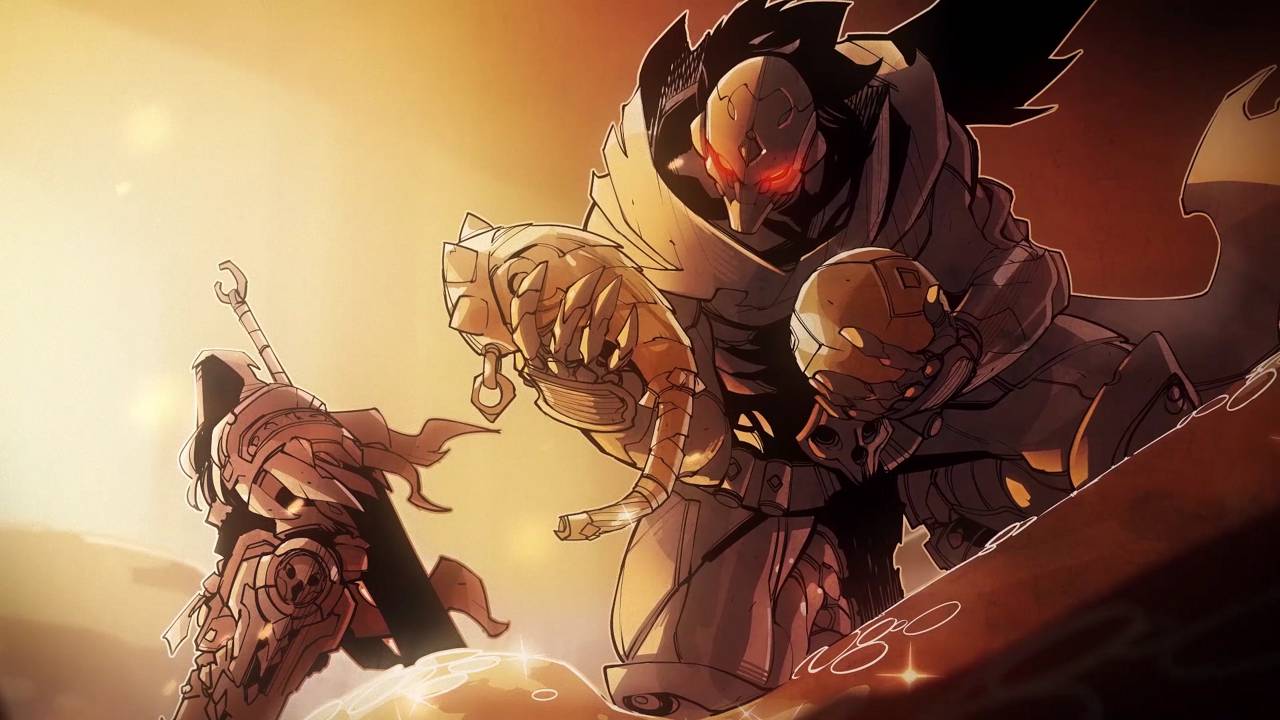 Darksiders Genesis doesn’t necessarily have the deepest overall narrative arc, but the development between War and Strife- combined with a stellar co-op experience- make it well worth the $50 USD price tag. The game will provide about 16-18 hours of gameplay, and unlocks “Apocalyptic Mode” after completion, which ramps up the difficulty and rewards the player with the game’s true ending, making replayability yet another strength for Genesis. I had a few issues with pacing, as well as dealing with some frustrating camera angles, but this is overall a well produced game. Though it may be considered a series spin-off, Darksiders Genesis is still one hell of a prequel.