Assemble your best adventurers from the local tavern! Sharpen your swords and prepare your spells! Dark Quest 2 comes to the Nintendo Switch after being released nearly a year ago on Steam. It claims to come loaded with a story-driven campaign, couch co-op, unique heroes, and dice-based mechanics. We should all be very afraid, as I’m certain dice have only ever been used to kill adventuring parties. As long as we’re being realistic, if my couch friend doesn’t kill me I’m sure some spikes, somewhere, will. Let’s take a quick look at what’s lurking in the dungeons of Dark Quest 2 – you might actually be more than a little surprised in what I’ve discovered within its depths. 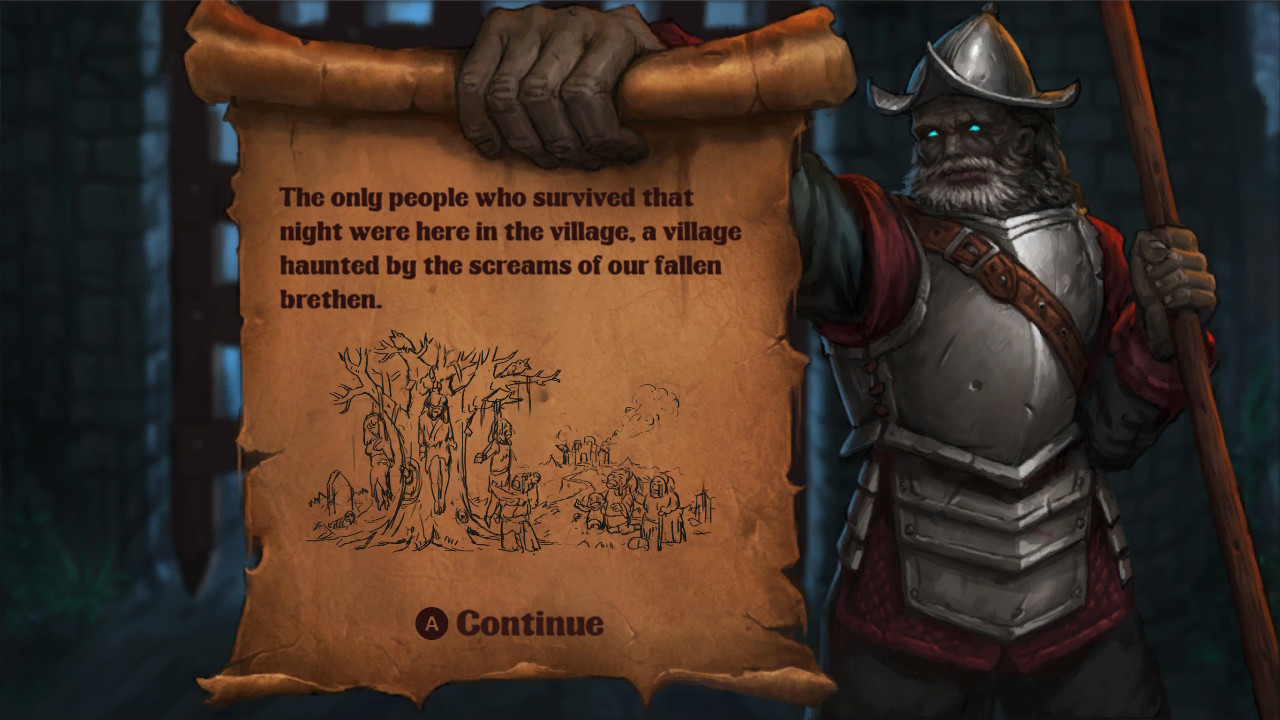 A sinister evil brews underneath the castle. On a night of grand celebrations, put on by the king himself, the sorcerer and his league of minions have risen up, slaughtering every man, woman, and child in the process. Only those living in the village remain, and you must journey into the castle to rid it of this evil. It is here where your Dark Quest starts.

Dark Quest 2 comes with a storyline, but I wouldn’t call it a tent-pole feature – it’s more like the pushcart vendor found around the back selling 2-for-1 dogs. At the beginning, you’re presented with the main plot and story via cut scenes. After that, the story pieces are usually only found within the level descriptions. As your adventure continues, there are a few conversations that take place inside the castle, but these are largely just banter with some evil minion you will soon destroy. Dark Quest 2 feels more like a series of bite-sized adventures than a deep story-driven campaign. I don’t feel like this is a huge downside for Dark Quest 2, though it could be for those looking for a deep story. In my opinion, Dark Quest 2 can more than stand up without it though. 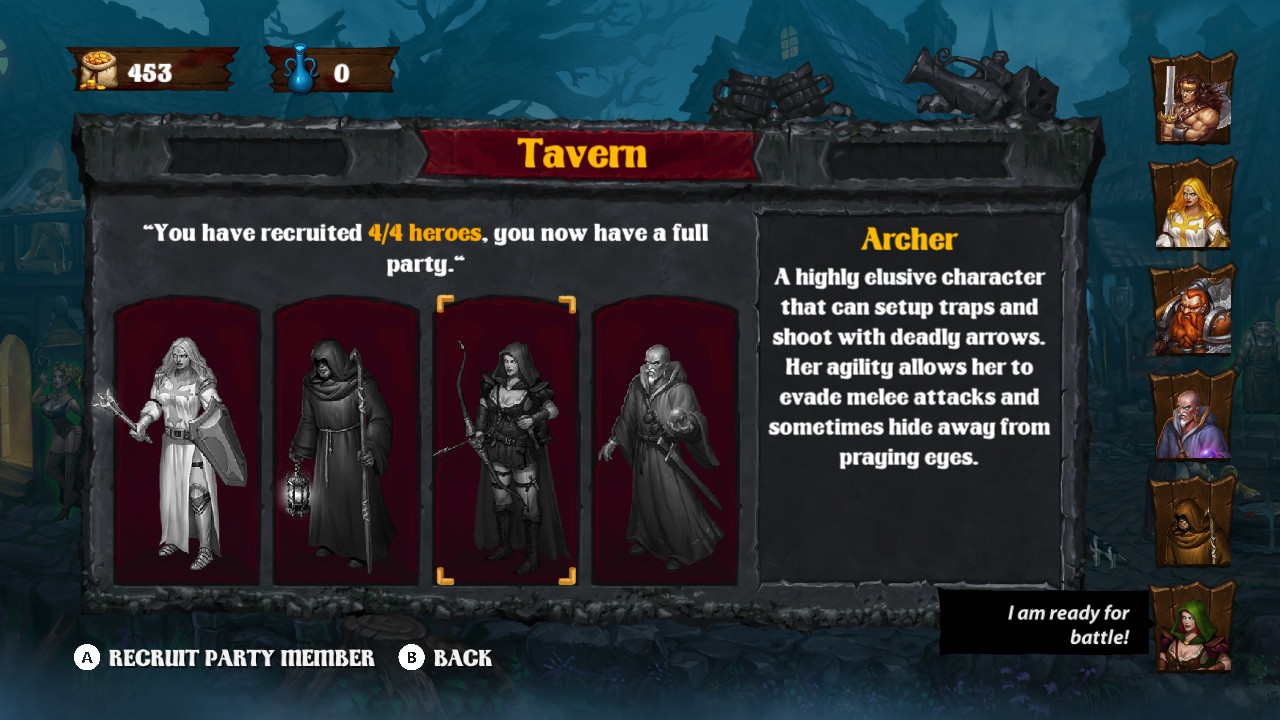 Dark Quest 2 graces the stage with a total of six playable heroes, however four of these have to be “purchased” from the tavern after completing a set number of quests. The variety is nice, with no two classes being alike, and each one comes with a total of eight skills that can be either passive or active. The number of unlockable skills rivals that of larger RPGs, and the skills themselves are not only nice to look at (while dreaming of future unlocks), but are also a joy to use! I really liked the Wizard’s ability to slaughter multiple targets at once, and the Knight’s ability to heal the wounds of companions.

Questing For The Glory 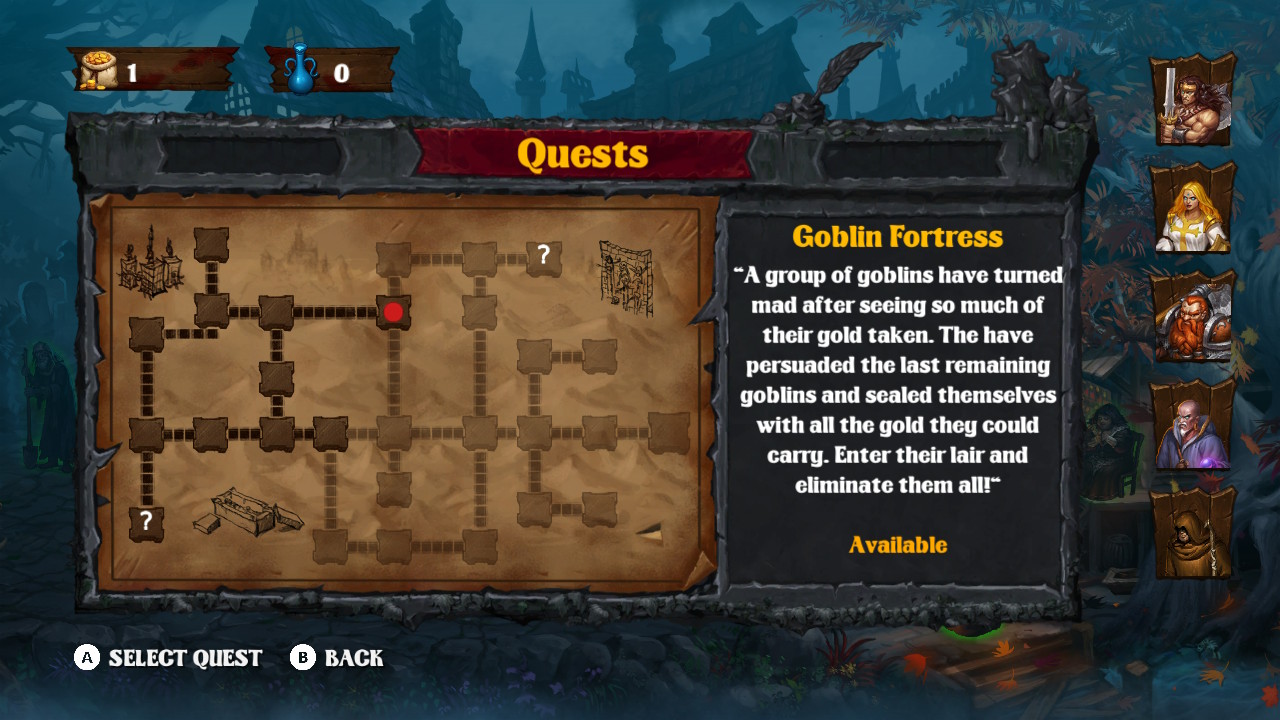 Once you have your party assembled (and outfitted) for battle, it’s time to do what heroes do best – set out on quests for riches and glory! Quests in Dark Quest 2 are represented as nodes on the map. Later missions are not reachable until its neighboring node is completed. It’s all very linear, with all roads leading towards the sorcerer. There are two or three side paths that you can take, but realistically they’re all heading in the same direction (save for minor deviations). 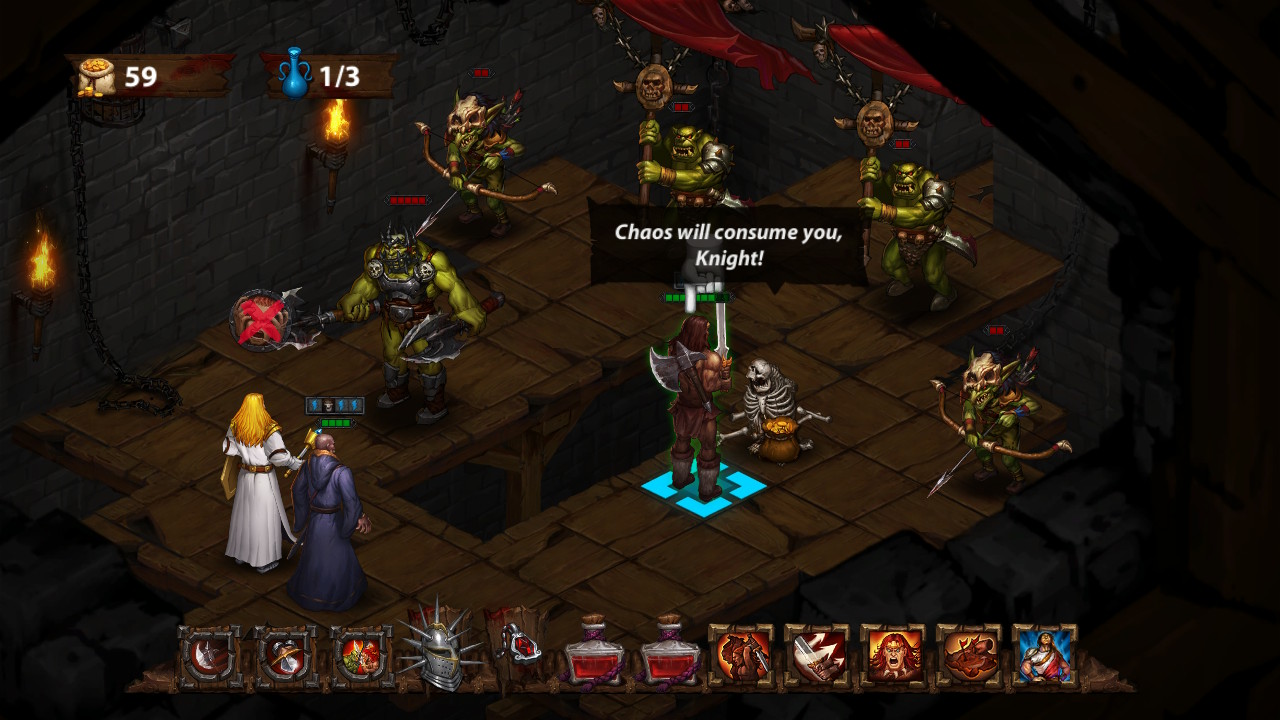 One of the main pillars of success for Dark Quest 2 is found within its turn-based combat system. I quite enjoyed running through dungeons, collecting gold, and upgrading my skills, but putting them to use and laying waste to enemies was a lot of fun. Dark Quest 2 adds a unique spin on combat with some of its dangerous dice-based mechanics. Enemies and traps will constantly test your courage, sanity, and perception. Fail sanity checks, and you may find yourself attacking your friends. Other times, you may not find what you are looking for if your perception rolls are low. I did warn you earlier – nothing good ever comes from dice rolls.

The combat itself is pretty fun and fairly strategic. Most active skills have a set number of charges, which are the total number of times you may use them per level. Other passively gained skills, like the double attack, will proc after a certain number of attacks. All of this leads up to what could be a devastating turn as you unleash all your attacks at just the right moment. 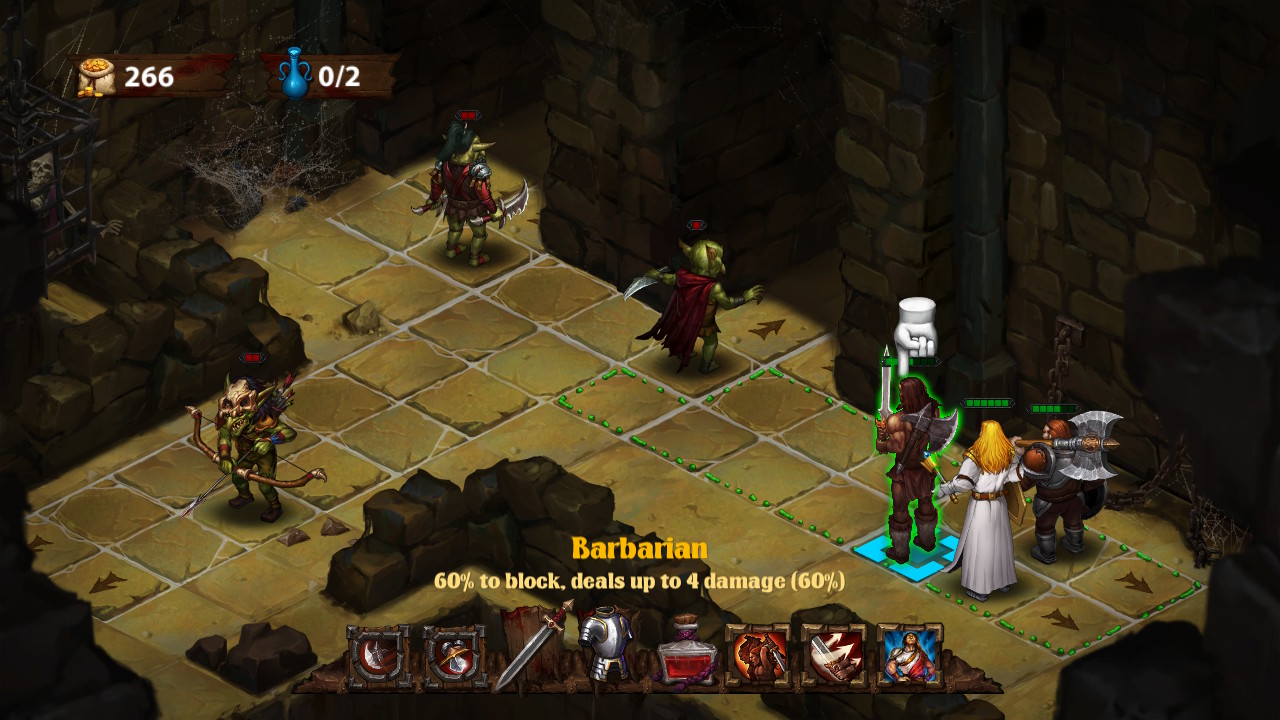 On the brighter side of things, the levels do get more and more complex. The actual layout of the rooms grow, with some even becoming maze-like. Your adventuring party will come across everything from treasure rooms, traps, skulls of fate, and more enemies than you think you can handle, with some levels even restricting the total number of heroes you can bring along. There’s one test of wits where you’re only allowed to bring one hero and there are no actual enemies to fight, just the dice rolls themselves. A little while after that, there’s a hostage rescue mission. Dark Quest 2 really tries (and succeeds) in staying fresh the whole way through, and this is a welcome sight to those tired of the typical RPG grind.

It Takes A Village 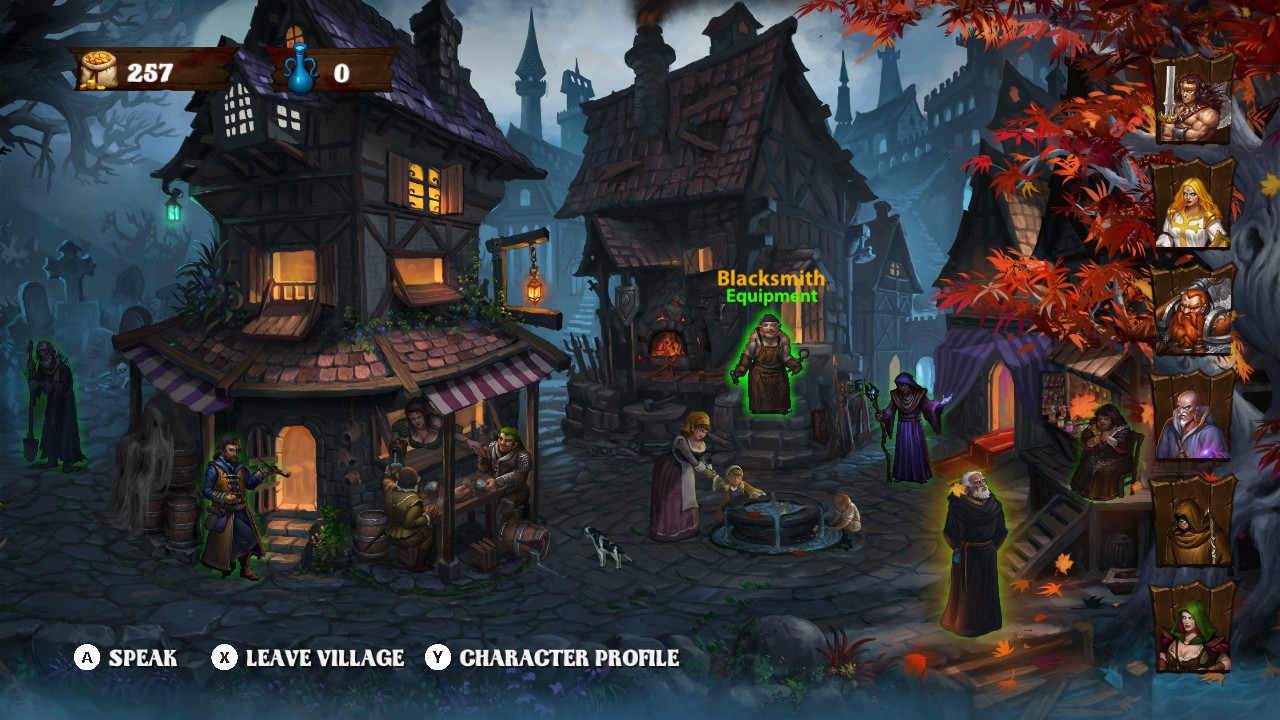 As you may remember, you and your adventuring party are not the only ones that survived the slaughter. The village is stocked with merchants, a blacksmith, a gravedigger, an alchemist, and a magician – no quest would be complete without a good magician. Each of these village members will assist your party in some manner. For instance, the magician is where you learn spells, and Lizzie’s Elixirs is where you spend your hard-earned gold on temporary, random buffs. 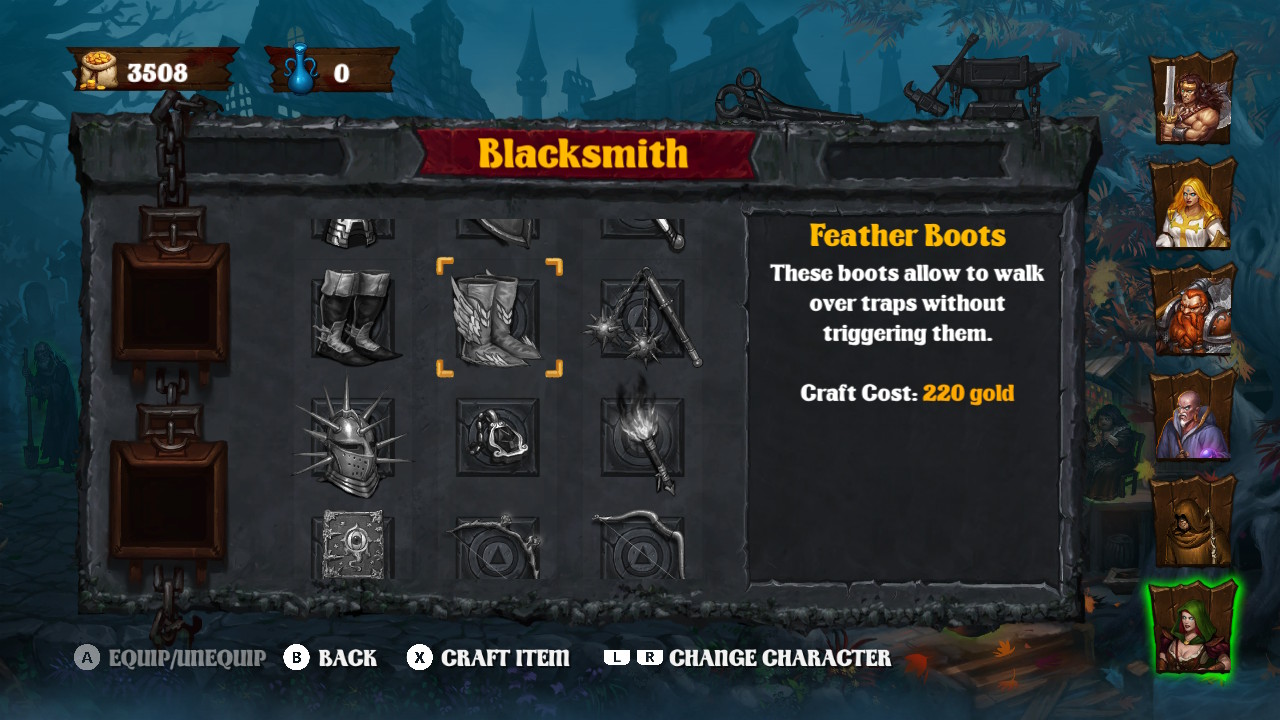 I was quite surprised at the amount of usefulness in each of the vendors available. The blacksmith has a total of 19 different items you can equip your heroes with, while the Alchemist has six different potions on hand. Since each hero can have two items and two potions equipped at any given time, these vendors become a welcome addition to the turn-based combat, adding a bit of customization on how you approach each dungeon. Equipping my wizard with a Potion of Refresh allowed him to cast the same spell multiple times – a devastating combination to all the invading minions.

As much as I’ve enjoyed Dark Quest 2 so far, it does has a few minor problems, one of them being a show-stopping bug that requires you to restart the level completely. Bugs of this type are no fun, and they must be outed for all to see. On two different occasions, after using the Wizard’s tornado skill on one of the end levels, my cursor would disappear and I would not be able to select any attacks, other skills, or even the “end turn” button. The only way out was to restart the level from the beginning. I’ve used the tornado skill prior to this with no issue, but it seems to be a magical bug combination specifically involving the second to last level. 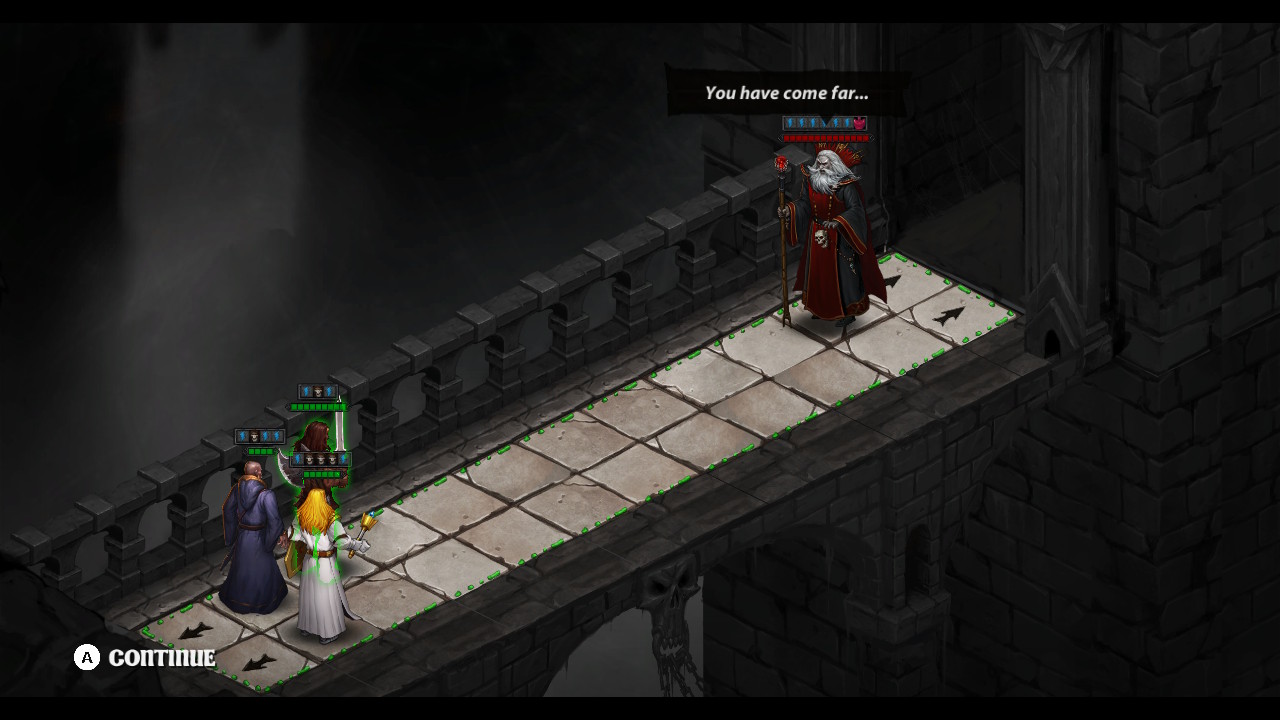 Dark Quest 2 is a fun turn-based dungeon crawler with some unique dice-based elements that keeps you on your toes the whole way through, but it won’t take you long to cross the finish line. I completed the game in roughly 5 hours, and I could say that Dark Quest 2 is a good game that doesn’t overstay it’s welcome, but that would be nothing more than a nice way of saying it left me wanting more. One playthrough, without repeating any levels, was more than enough to unlock every skill for my 4 chosen party members. Given its length, the full price of $10.99 isn’t the best value on the eShop. We’re all spoiled in this regard, as there are so many great games at bargain prices, but I think Dark Quest 2 is still well worth the entrance fee despite its short adventure time.