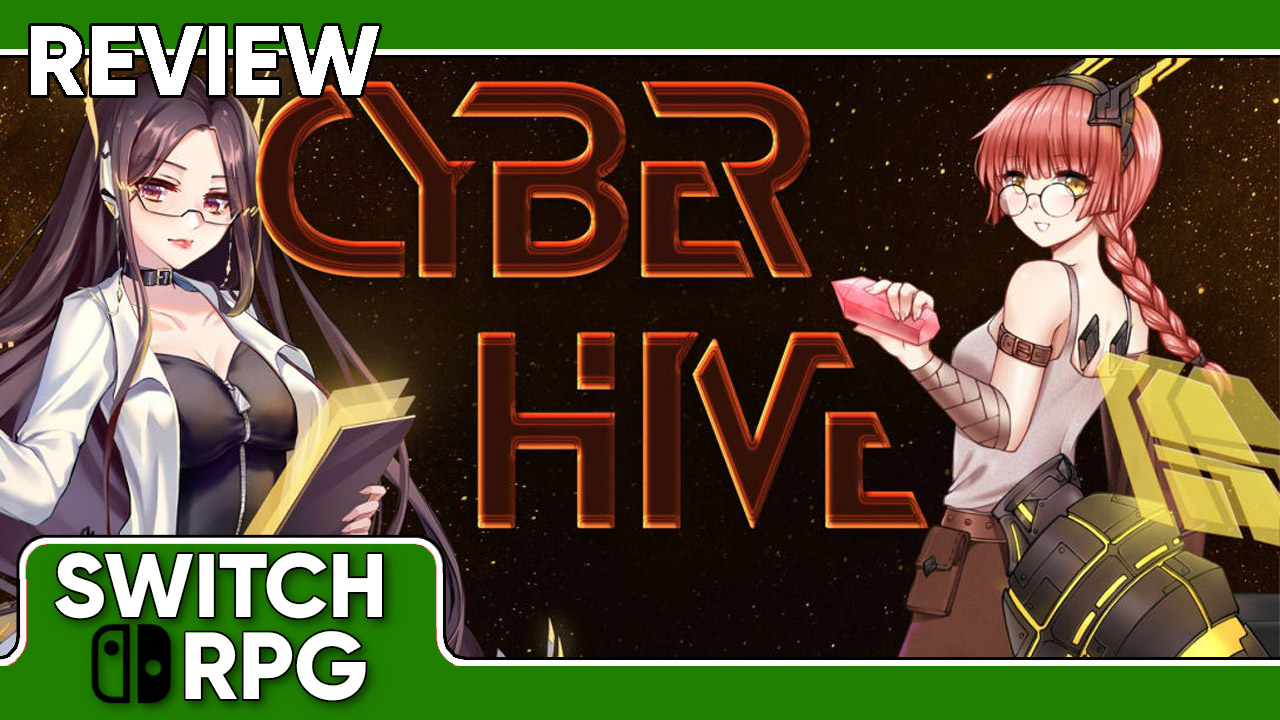 Some of my favorite titles in the realm of role-playing extend beyond playing as a single character. Instead, I have become very fond of the simulation game, and I am always looking for a proper entry on the Nintendo Switch. While Halcyon 6 was an extremely addictive experience that let me down with its sudden time-limit imposition in the late-game, it left me itching for another spaceship simulator in its vein. Although CyberHive has some essential differences, the idea of commandeering a colony spaceship of bee-people as they explore the galaxy and attempt to survive is strangely appealing.

Some people might find all of said bee-people’s personal endowments appealing, as well. But do these… assets… make for a great game? Read on and find out. 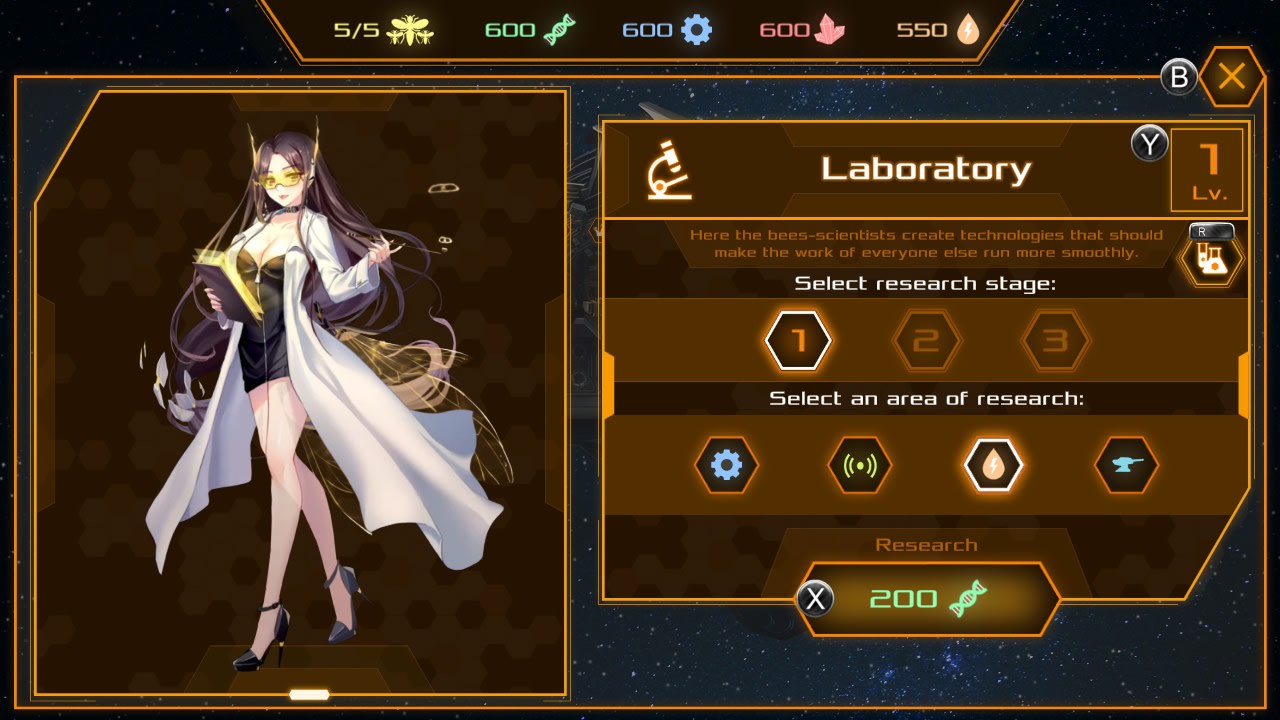 CyberHive is a narrative focused space-survival title, where players take on the role of the commander of the Melistar, a spaceship carrying a Queen bee and her brood through the reaches of space. You have to relegate your crew to specific tasks during each cycle in order to make sure your ship has the resources to support the hive and continue its journey. These tasks are divided into areas of the ship, though some areas are only either useful or accessible when certain conditions are met. While there are a variety of resources, they all contribute to the most essential conversion loop: the mining and refinement of crystals into energy gel, the main resource for consumption.

You will spend a great deal of time sending bees out to temporary resource points, which can house a combination of the four primary resource types: mechanical, biomaterial, crystals, and energy gel. You’ll send bees to the laboratory to spend biomaterial in order to research and improve processes on the ship, while bees sent to the navigation module improve the chances of encountering resource points. A bee stationed in the refining module will improve the rate of crystal processing, the act of turning crystals into energy gel, which in turn sustains the crew for another cycle.

The other modules on the ship are a bit more circumstantial, and are as follows: the medical bay can only be accessed when bees are injured and require healing, while the maintenance module is always accessible, but only requires staffing when the shields have taken a hit during combat and need repair. Depending on how frequently you feel you’ll end up in combat, you might stock your artillery module with more bees in order to boost the amount of missiles you can use to intercept enemy projectiles in combat scenarios. 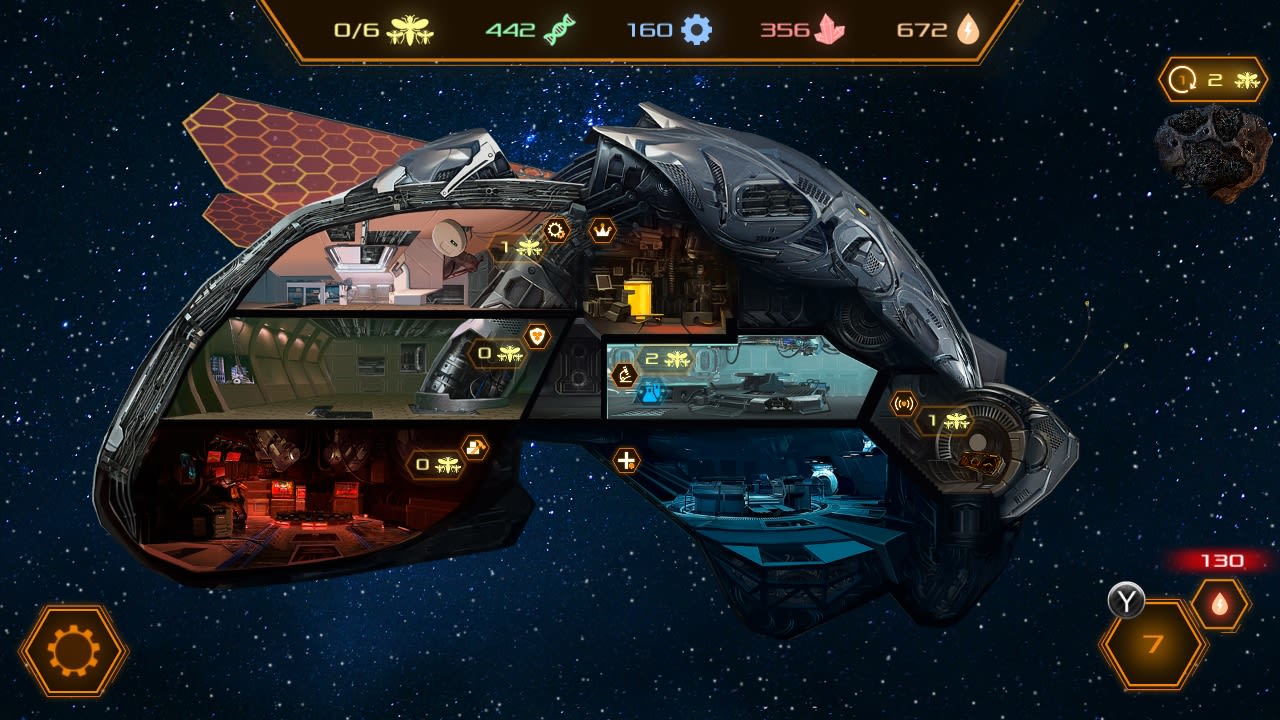 The other, essential element of CyberHive are the semi-randomized encounters that can occur at the beginning of each cycle. These will present a scenario either unfolding on or near the Melistar. Unruly crew members, rogue experiments, space-faring hitchhikers, and more present the player with moral choices that allow them to play as ruthlessly or benevolently as possible. The outcomes of these events are also randomized, so you can end up picking the same option during two separate runs and get two completely different results. Sometimes these events will ask for a sacrifice of resources or even crew members, which can prove dangerous in the scope of your mission. Remember, the Melistar’s journey will end if its energy gel reserves do not meet the consumption demands of the crew.

Because of the random nature of event outcomes, the player can choose to role play a specific kind of commanding officer in a variety of ways, whether choosing to be frugal with their resources for the meta objectives or amicable so as to ensure their survival. However, this can have long-term repercussions during the game’s campaign mode. While players can jump into the survival simulation mode, it does not feature the overarching narrative of the campaign mode, which is where the full effect of event choices can be seen. 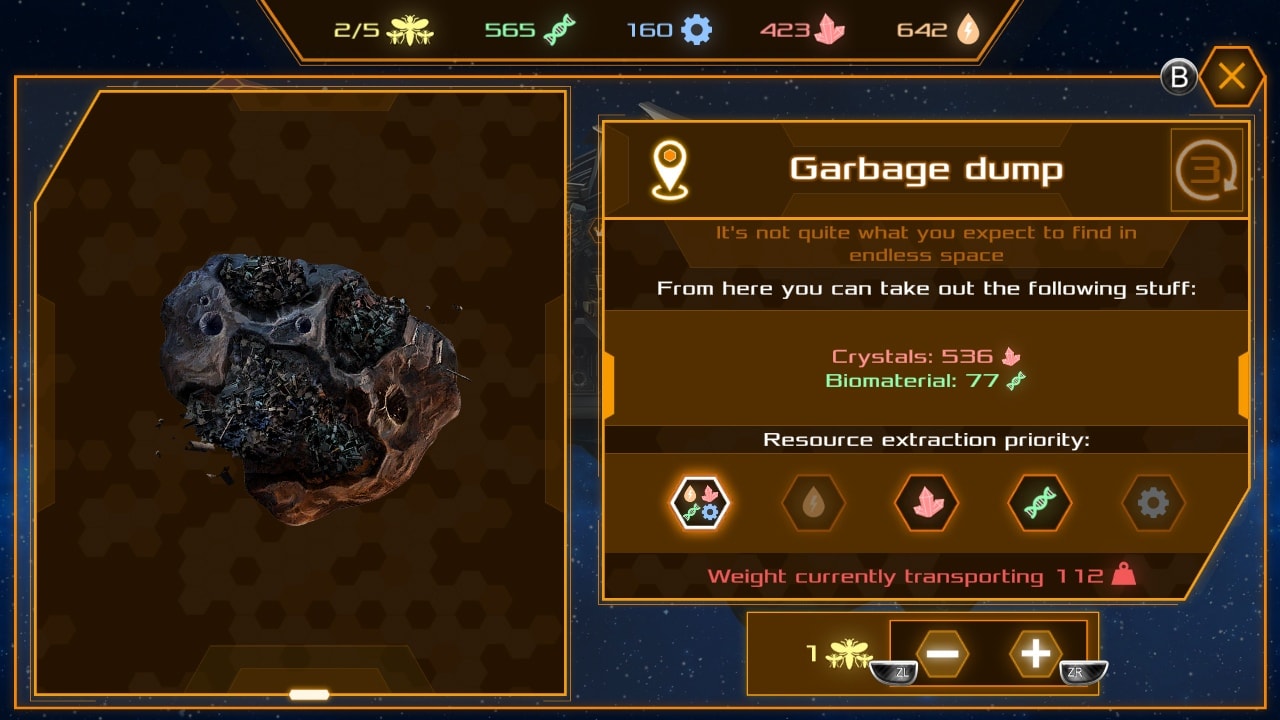 In the campaign mode, the Melistar will stumble across an artifact that is an essential key to a much larger device, something so powerful that the separate access keys were divided among the space-faring races in order to avoid one race extorting its power. However, the nature of this device and its history are so far removed from the present that the reasons for its existence and the power it may hold are no longer known, so the Melistar and its crew must determine whether they wish to harness its power for themselves or prevent its activation.

Either way, because the artifact keys are spread across the races, you’ll need to resort to diplomacy, subterfuge, and violence when interacting with ants, mosquitos, beetles, millipedes, and more. Of course, the Melistar is a single ship, and so some of these tactics won’t work against a more daunting, clever opponent. Based on the choices and preparations you’ve made, the outcome of many scenarios can and will change, and the developments that occur later in the campaign narrative will be directly influenced. You’ll gain event options based on the way you’ve handled previous diplomatic relations, as well as your responses to developments that have occured on the Melistar itself. It is an impressively robust branching narrative.

It’s a shame, then, that the localization is extremely spotty. There are typos and misconstrued idioms abound in CyberHive, and it often results in a stilted and awkward read. For a game with as much text as this, it is understandable that a translation would be quite a herculean task, but the result is disappointing in many aspects. The gravitas of this epic space opera is undercut by the awkwardness of the writing, and that feels like a grievous oversight. Unfortunately, this is not the only area in which CyberHive’s presentation suffers.

Whether you like sexy bee-people or not, the heads of each of the modules on the Melistar are the only character portraits you’ll see in the entire game, and their swaying doesn’t make up for the lack of imagination elsewhere. The screen you will find yourself looking at the most is the 2D teardown of the Melistar, which features little detail outside of a crew counter for each module. The portraits for events are very generic and reused on many occasions, failing to give the locales and scenarios a colorful depiction. This is where perhaps a well-crafted script could help fill in the blanks and offer vibrant descriptive imagery… but as was previously mentioned, this isn’t one of CyberHive’s strongest suits. 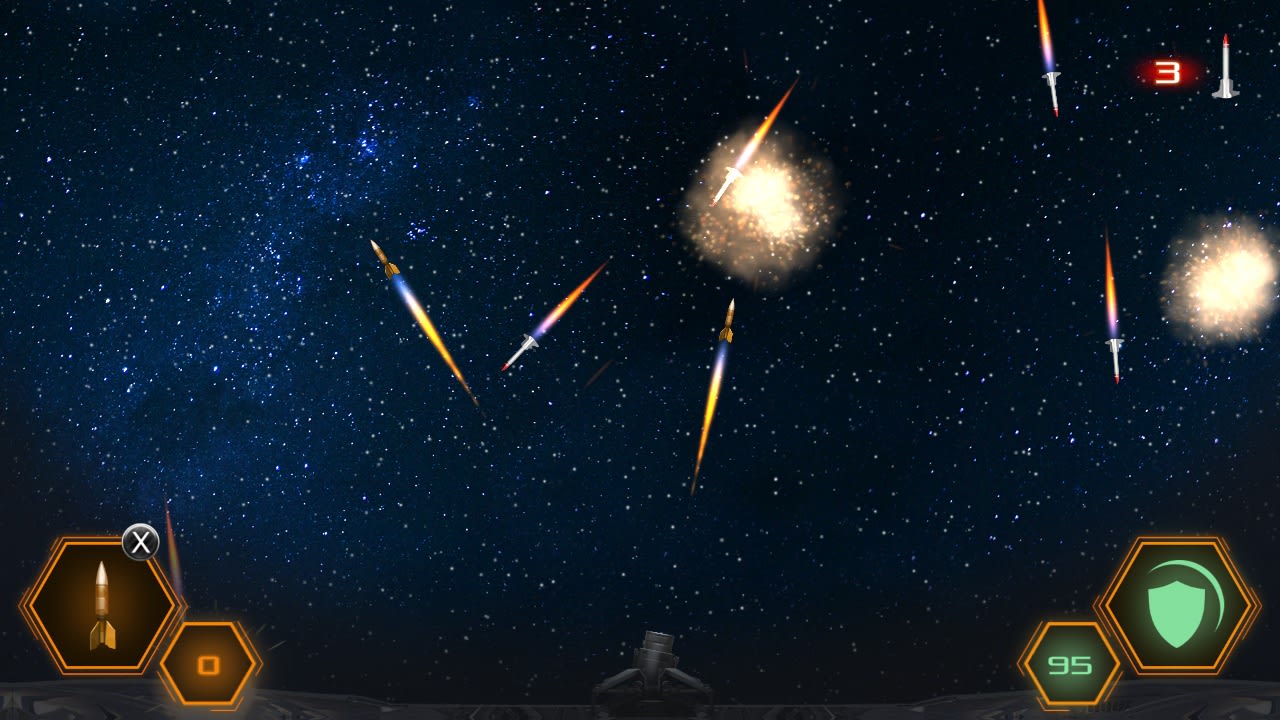 To top it all off, although CyberHive’s extremely limited soundtrack captures a futuristic space exploration feel, it also lacks variety. There are no more than a handful of tracks here, and they rarely communicate any sort of emotion beyond ethereal space exploration. While it won’t test your patience in short bursts, it disappoints when you acknowledge the incredibly varied scenarios present in the game.

There are some choices in CyberHive that will lead to downward spirals from which you cannot crawl (buzz?) out. When this occurs, you’ll be alerted that your voyage can continue no further and your game will end. It’s a somewhat abrupt and sobering truth, which further emphasizes the importance and prioritization of energy gel as a resource, but each failure is not a hard reset. As you reach specific milestones, you’ll unlock achievement modifiers that can be applied to your next run in limited amounts. While progress tracks for every one of these achievements, they can be further leveled for additional bonuses, which contributes to the feeling of steady progression. After a few failed campaign runs, you’ll likely have the achievements needed to delve even further into and perhaps even complete the narrative, which does feature alternate endings for your role-playing tendencies to appreciate. As mentioned before, there is also a simple survival mode that tasks players with simply completing a 130-cycle run, which is no small feat.

I’ll be frank: I’m not the biggest fan of visual novels, which CyberHive often feels like. The simulation elements are essential to the gameplay, but they lack depth and expansiveness. Research expansion may be tiered, but you can only select a section to invest in, with the actual unlock being randomized. You’ll need to be mindful of your energy gel consumption, and that’s pretty much it. There is a very rudimentary missile defense mode for when you skirmish with other ships, but even this mode itself can be circumvented via an automated alternate mode, in which success or failure is dictated by the power of your shields and artillery, numbers that can be altered by the staffing of your crew. You can practice your ability to play the missile defense game, which involves intercepting missiles by aiming with high precision, but the cursor movement feels clunky and the losses endured from poor play can be extreme.

At the end of the day, however, the game is largely focused on your response to events as a form of role-playing, and the randomized nature of the outcome allows the play experience to stay fresh, though you may not always feel like your choices are rewarded. This is unfortunate, but not unrealistic, and in that sense, CyberHive does succeed in a degree of realism. It is just a shame that the text itself is as poorly-delivered as it is, because it largely undercuts any sense of immersion one might hope to obtain. The game’s plot and machinations of its specific races are fascinating, but it is difficult and unrewarding to engage with. Couple this with its uninspired aesthetics and basic format, and you have a title that can only avoid becoming monotonous in very short bursts of play. Though CyberHive has aimed for the stars with its intriguing narrative-base gameplay, it fails to capture the imagination in just about every other way- unless you like looking at lurid, anthropomorphic bee-girls, that is.