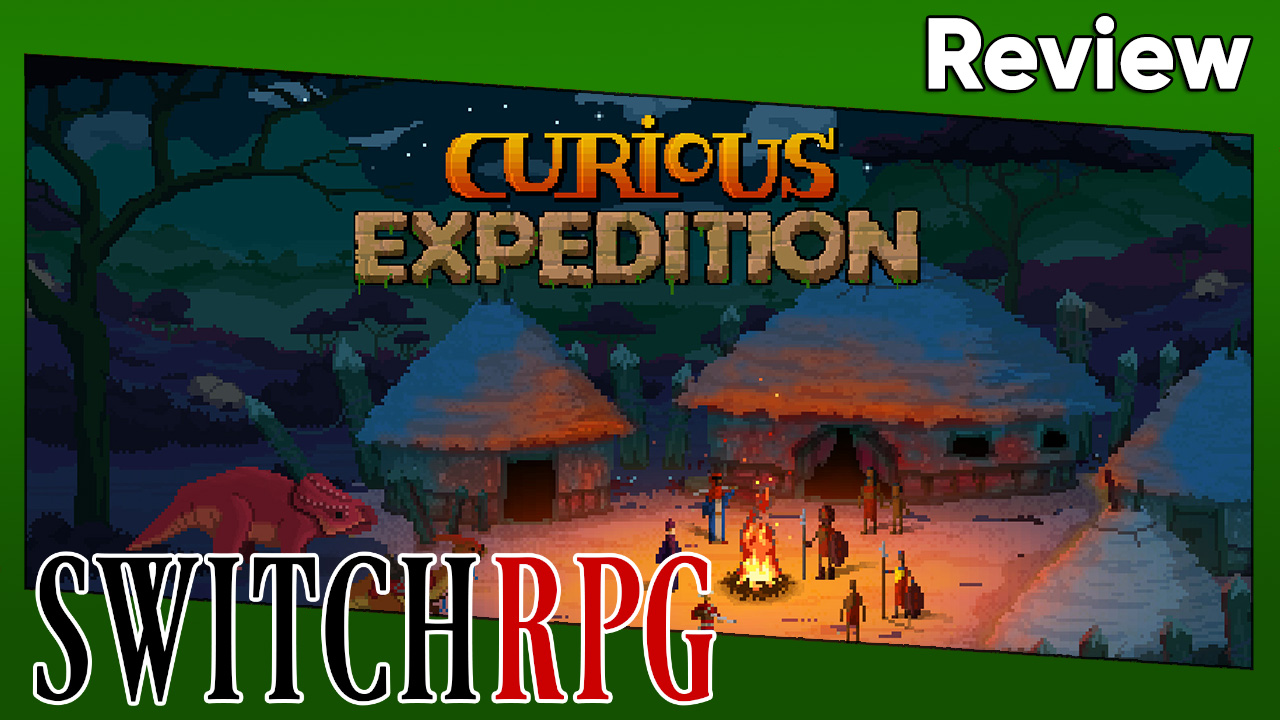 Curious Expedition is set in a world before commercial flight and easy travel, a time where the world was not completely explored, and discoveries were a way of adventure and life. The simple premise is to find the golden pyramid in each of the six expeditions. While that in itself is straightforward enough, you can accomplish more by exploring and trading items to amass more fame and money, as the player can take on additional, small side tasks, such as reuniting loved ones or retrieving certain items for people you leave behind. The story itself is not very narrative-intensive, but makes up for this with its gameplay. You take on the role of a famous explorer from history, each of them possessing different perks and traits. The journey is never without its perils, as any convoy trekking the land is subject to the dangers of the wilds, as well as their own psyche. 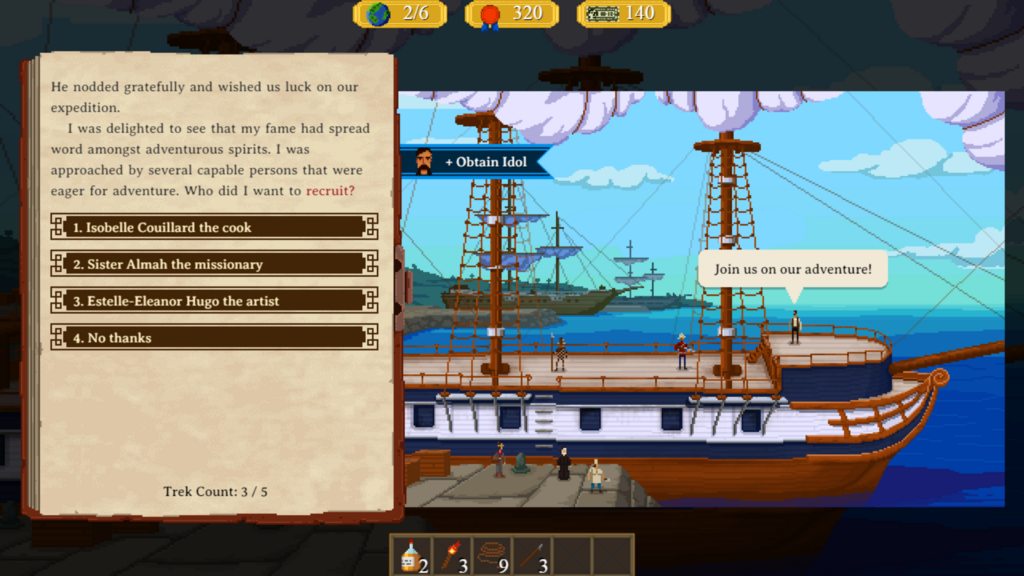 The game takes a Civilization-style approach to moving around a map comprised of hexagonal tiles. Each tile shows different types of terrain, from lush forests and barren wastelands to tall majestic mountains and tiny tribal villages. Movement across the map will take a resource called “Sanity,” and the longer you’re out exploring the wilds with your convoy, the more sanity is then expended.

Sanity can be regained via single use items, camping spots, or resting back at your ship or in a local village or trading post. Managing this resource can be challenging at the beginning of a run, but as you gain experience, it becomes a lot less of a hassle. While this mechanic is definitely a major focus in keeping yourself alive on your adventure, it’s by no means the only thing to keep track of: wildlife is definitely out there, and not all of it can be safely ignored.

Large wild cats and other carnivorous beasts are always on the prowl, and will attack they catch wind of you. This will lead to a dice-rolling combat phase, where you can string together combos of dice and use items to fend off the creatures. Your convoy of companions are not safe from battle, with each of them able to be targeted by the enemy. Taking out weaker creatures can help save the amount of damage you take, but running away from battle is nothing to be ashamed of, either. Smaller predators like hyenas will go down more easily than a huge, ferocious tiger, so picking your battles is absolutely necessary for your team to survive. Combat doesn’t feel very polished, leaving a great deal up to chance, and that’s definitely a strike against the game.

Exploring the map will reveal certain points of interest as you uncover new tiles. Villages, pyramids, caves and other such sites can be explored, allowing you to search for treasure, create works of art, or trade items among the locals to get tools better suited for your current environment. Treasure can be stored back on your boat, which is necessary to save precious inventory space while out on expeditions. The more treasure you return with from an expedition with, the more fame you will gain by donating it to the museum, putting you above your peers in renown. Treasure can be also sold for a profit, allowing you to set out on your next trip with more tools and upgrades to various assets, such as your inventory space.

Coming back from an expedition will allow you to choose a perk for your explorer, such as the ability to see further on the map, or reducing the sanity costs of moving through difficult types of terrain. The more you accomplish on your journeys, the easier exploration will become, allowing you to accomplish more in less time and leading to more and more renown. 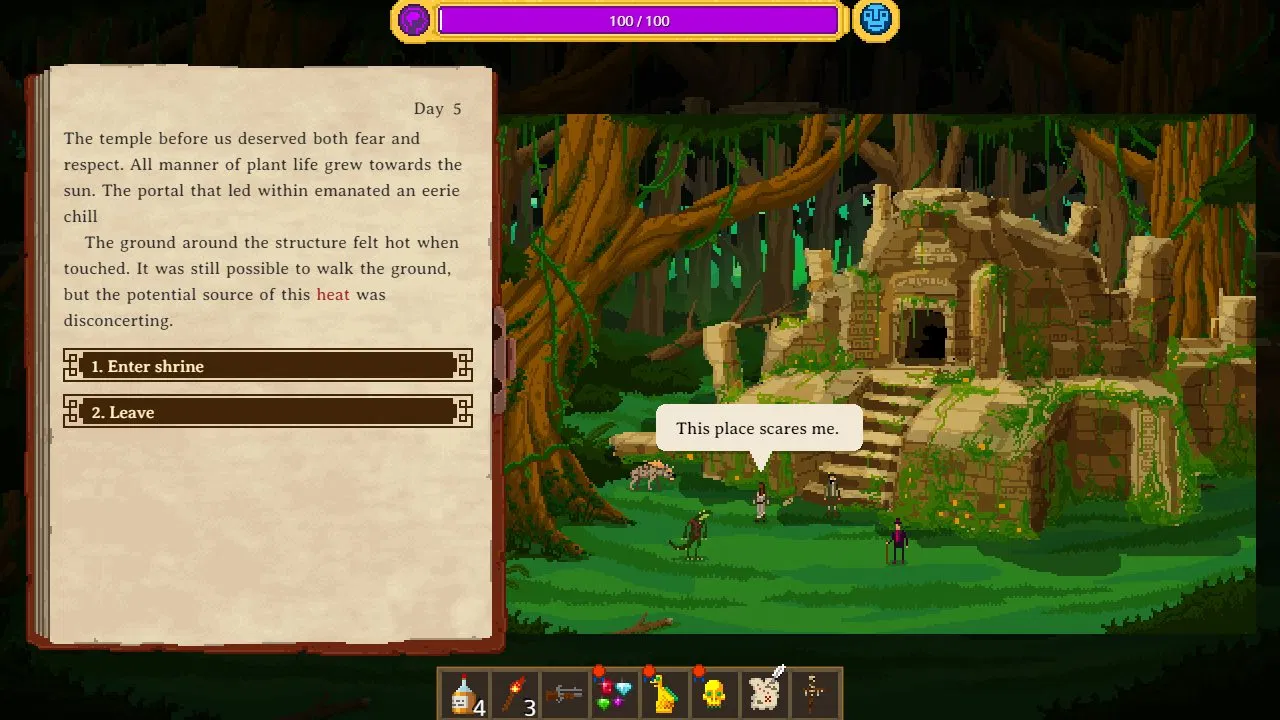 Curious Expedition takes a minimalist, pixel-art approach to graphics and design. The bright colors in most environments lend themselves well to the darker tones of characters and enemies, making the smaller representations on screen really pop. Fantastic color choices highlight complex objects, like fire and other sources of lighting, bringing out the best of this art style to create a world that seems alive.

The overworld itself is devoid of background music, instead opting for real world sounds that make you feel as if you’re really outside exploring. Wind and wildlife will grace your ears, but upon visiting local villages or points of interest, music will flair up to set the tone of the scene before you. This approach uses sound in a dynamic way, adjusting the way the player takes in the world they are exploring by using sound to invoke emotion. Tribal villages will feel alive, with steady drum beats creating a lived-in impression from the non-playable characters. 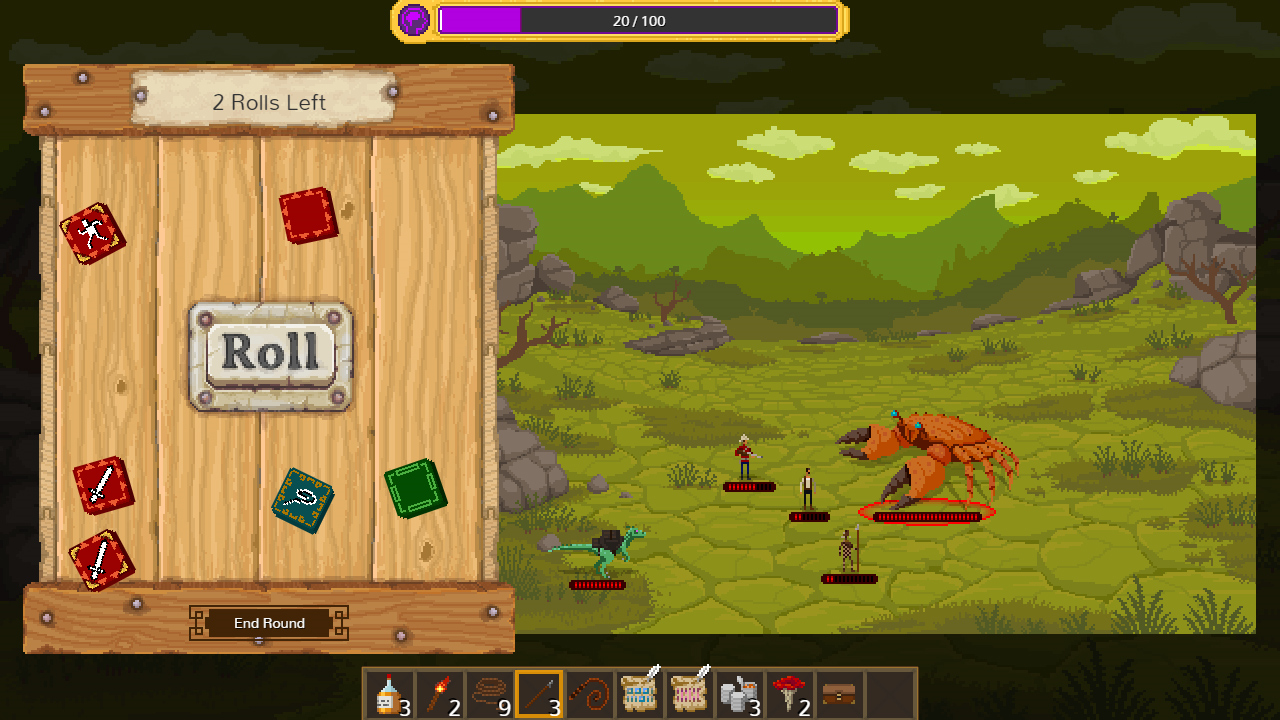 Curious Expedition does a great job providing a relatively realistic representation of the life of an old-world explorer. From managing resources to handling the relationships between your fellow travelers, the reality of roaming the untamed wilds is not always as pretty as we’d like to believe. The game’s beautiful art and involved, living world make for a true treasure to travel through, but the one big miss in the adventure is the combat. Even with a tutorial helping you to gain your bearings, mastering the clunky dice rolling mechanic is nearly impossible. Without being able to simply choose a reliable, basic attack, we instead are at the mercy of random numbers, something that removes any feeling of control or progression. I found myself running from most fights, and in a role playing game, the combat matters more than most other facets — something I really can’t bring myself to compromise on. I did enjoy my journey through the wonderfully created locales, but I felt like I came back with no real personal progression, save for choosing a single perk to increase my abilities after each foray into the unknown. Though the excitement of discovery and the novel premise might be enticing enough for some, Curious Expedition lacks a well-rounded attention to detail that lost me during playtime.