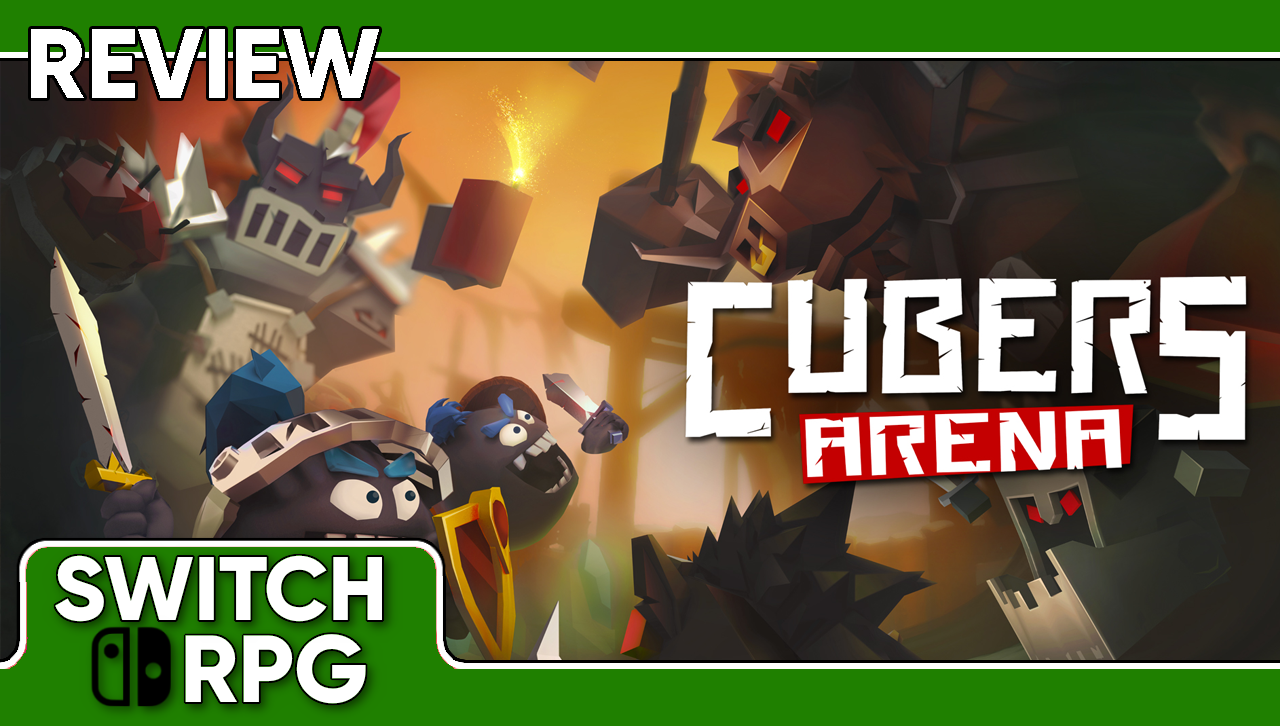 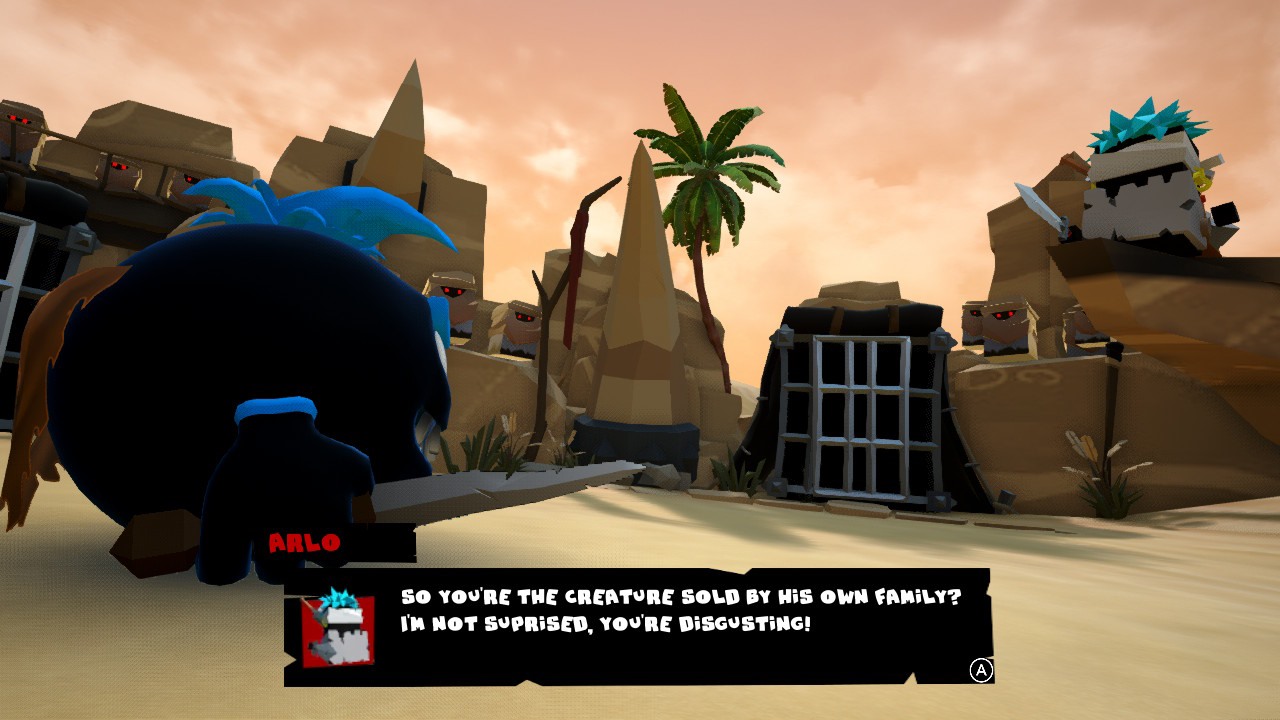 Sometimes, you just need a good arena brawler game to jump in and slash at giant hordes of enemies again, and again. Cubers: Arena is that game, and it has various weapons and skills to level up and the option to play solo or with a friend. This game allows you to just leave the real world behind and have fun. Silly graphics, a light story, and lots of bad guys to defeat makes Cubers: Arena a great game for winding down while simultaneously feeling all powerful for a while. 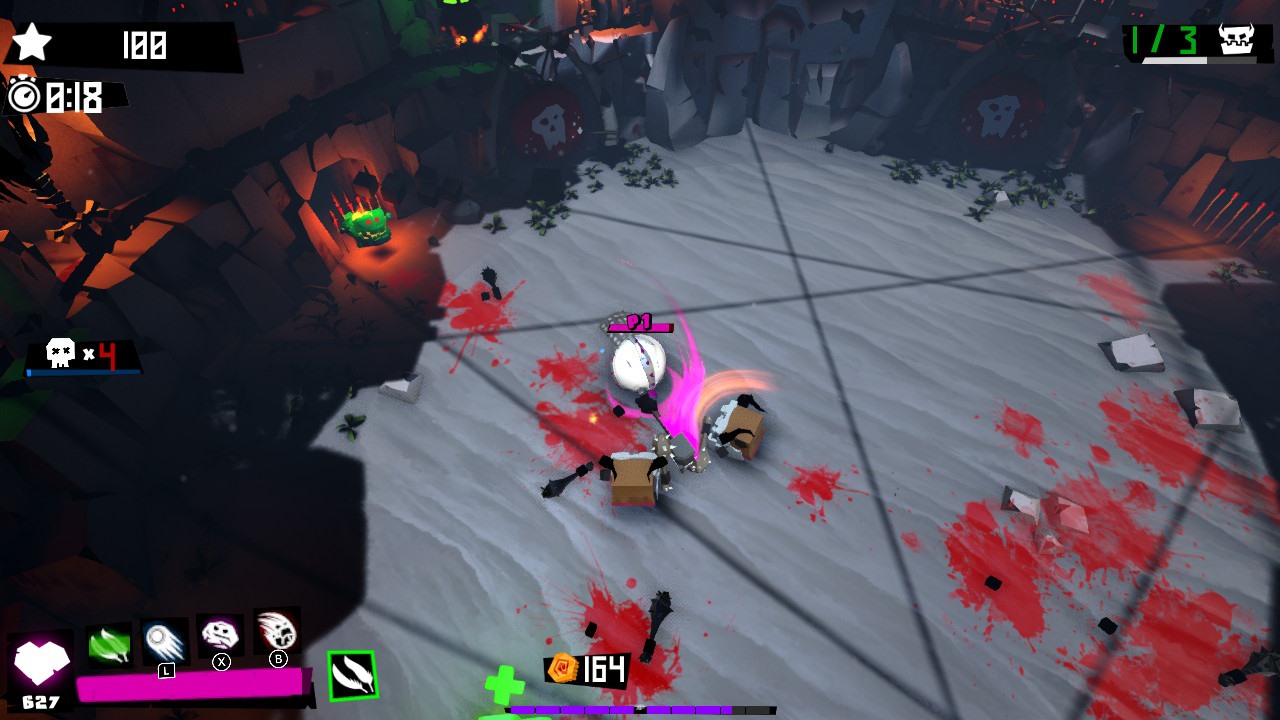 The gameplay is really what makes Cubers: Arena a good outlet for “zoning out.” Using twin-stick controls, you have a lot of options available to move and attack freely. The campaign mode can be played solo, or local co-op with one friend, and has four difficulties you can choose from (easy, medium, hard, and mythic). In the campaign, you work your way through four arenas that each have eight levels and a boss level. You can return to any level you have previously completed at any time, and can even change the game difficulty on a whim each time. Once you have selected a level, you are placed in the center of that arena where several doors are placed around the circle from which enemies can emerge. Your goal is to defeat all the enemies as quickly as you can by using your basic attack, as well as one of four special abilities as they become available. Depending on what you have asked Solus back at the Oasis to teach you, these abilities can vary, but in general you will have at least one that does area-of-effect damage and one that will help you regain some health. Spectators in the stands surrounding the arena will also occasionally throw out helpful power-ups, such as a health boost, an orb that will allow you to earn more gold, or a boost for increased armor and defense. Each level is broken into three stages, with a slight break in between that’s free of enemies and where the spectators will throw out more gold and arena tokens for you to pick up. 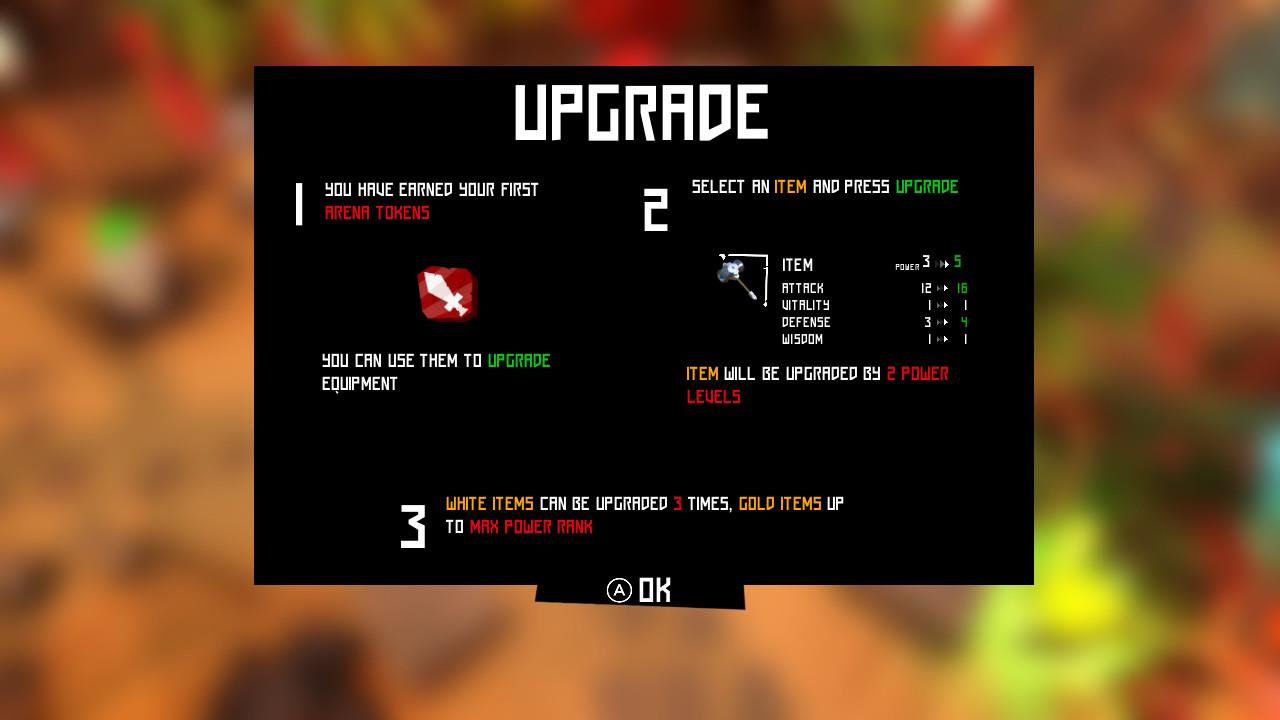 With each level you complete, you are able to improve yourself for the next battle. Baller levels up in his personal level which can unlock new skills to purchase/learn from Solus. You also can spend your gold and arena tokens to purchase new weapons and armor, or to upgrade existing equipment. 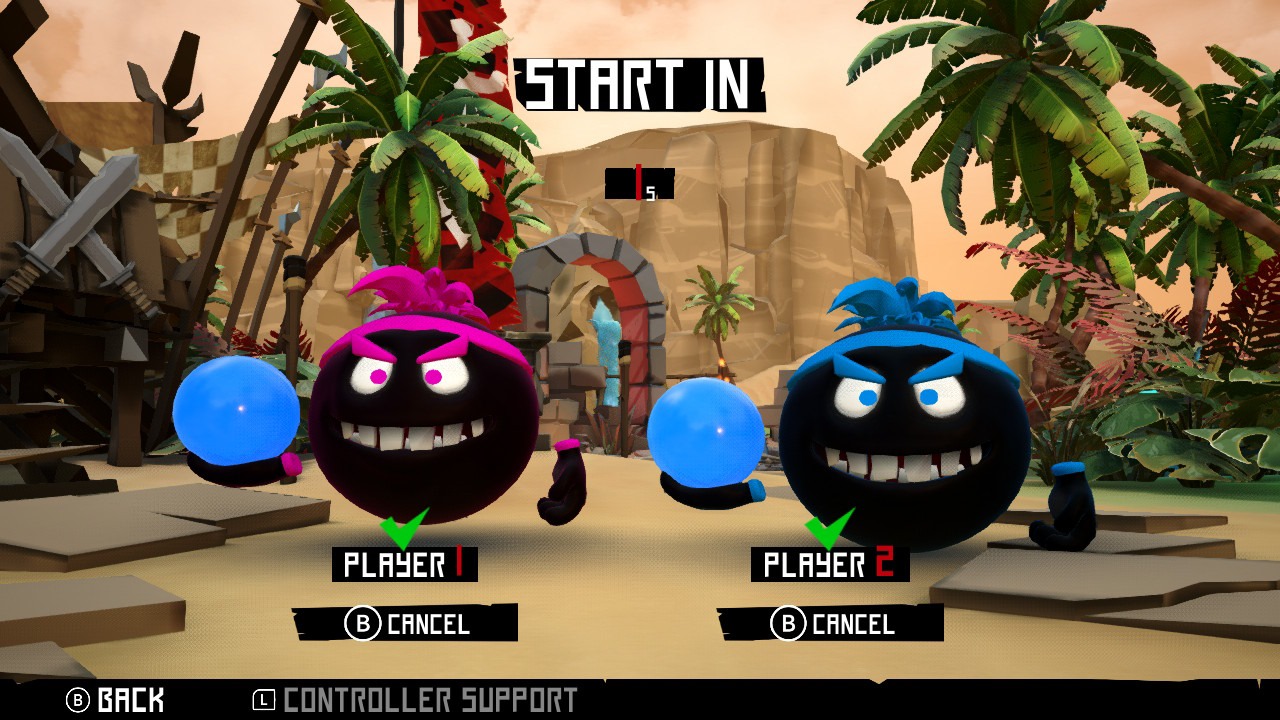 Cubers: Arena also offers an array of multiplayer options for local play. A second player can join you in any of the arena matches that you enter. Beware of friendly fire however… anything in the game can hurt anyone. This means that traps in the arena and other damage sources can hurt both the player characters AND…but this can be fun/entertaining with proper timing.

There are several mini-games you can play in addition to the aforementioned campaign arena battles, some of which can be played either solo or co-op. These include “Time Attack,” where you kill as many enemies as you can in a certain amount of time, “Mushrooming,” where you destroy mushrooms before they spread out too much, “Defender,” where you have to protect an incredibly ugly princess, and “Wave Survival,” where you just try to stay alive as long as possible with no health pick-ups. 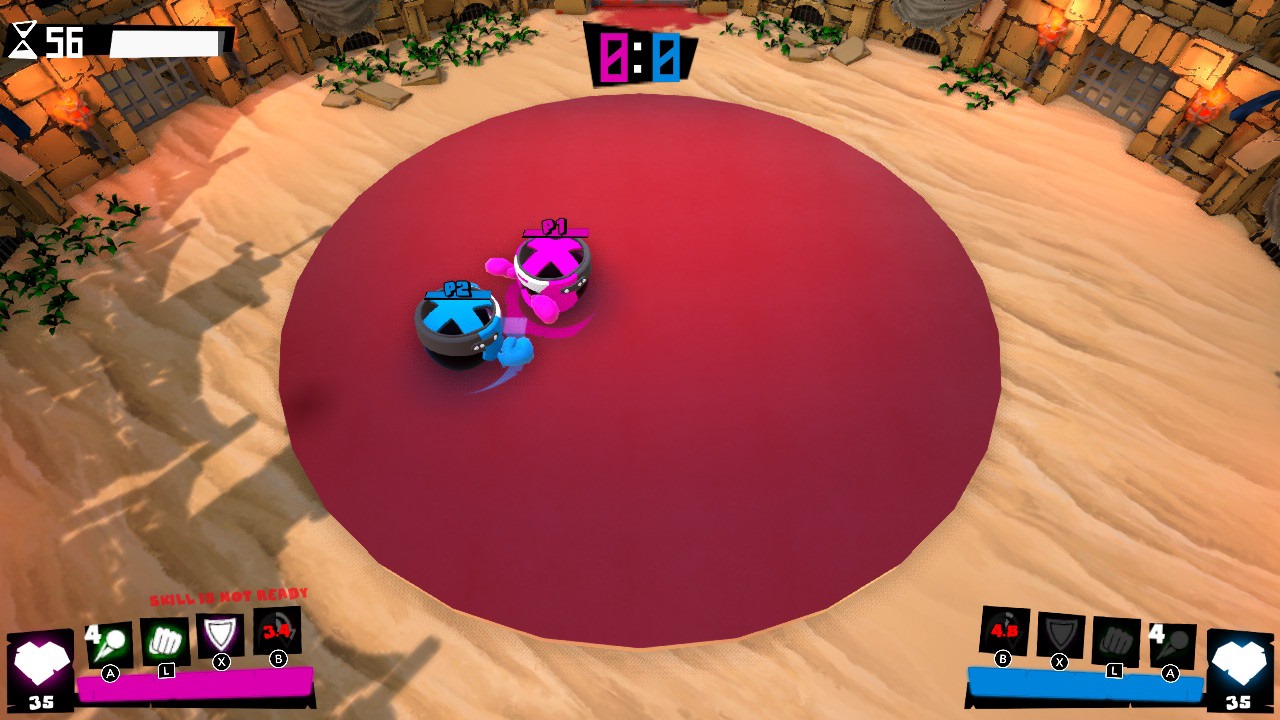 However, if you have a friend with you, there are five additional mini-games you can choose from that are specific to the mode, and these are played as versus games rather than co-op. The mini-games consist of Dodgeball, Sparring, Versus, Whackamole, and my personal favorite, Wrestling. In the Wrestling mini-game, you and your friend have to try to push each other off of a platform without falling off yourself. 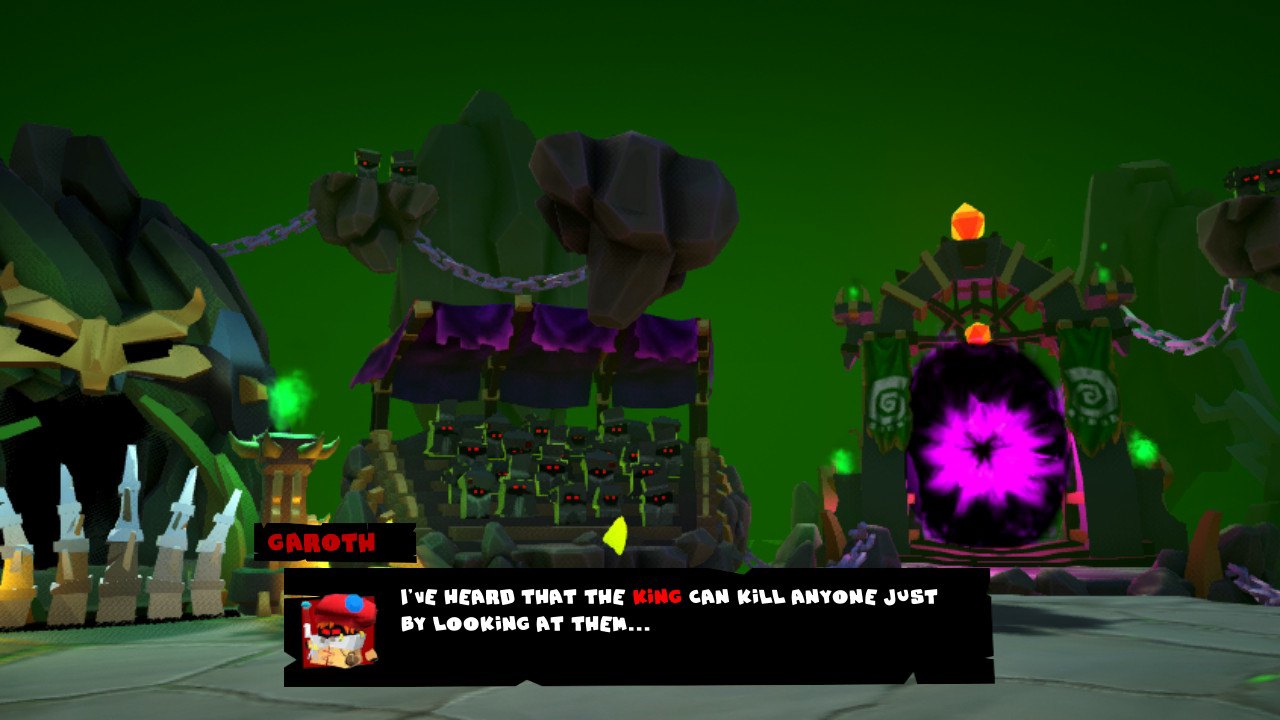 While Cubers: Arena is a lot of fun overall, it is lacking in the narrative department. Essentially, you play as a round fellow named Baller. In a world of cubes, being round is seen as ugly and strange. Sold into slavery, Baller must fight his way to freedom by defeating rounds of gladiators in the arena and four main arena bosses. In the Oasis between fights, you are able to talk with some cubers that will help you out. Solus will teach you new skills – for a price, of course – as you level your character up. Edin, the blacksmith, will sell you new weapons and armor and is where you go to upgrade weapons and armor you have. He can also allow you to switch between using two-handed weapons, or a one handed weapon and shield. Xardis will socket gems you have collected into your weapons. Finally, we have Garoth – he seems to be the cuber in charge and often sounds as though he may be secretly rooting for poor Baller. 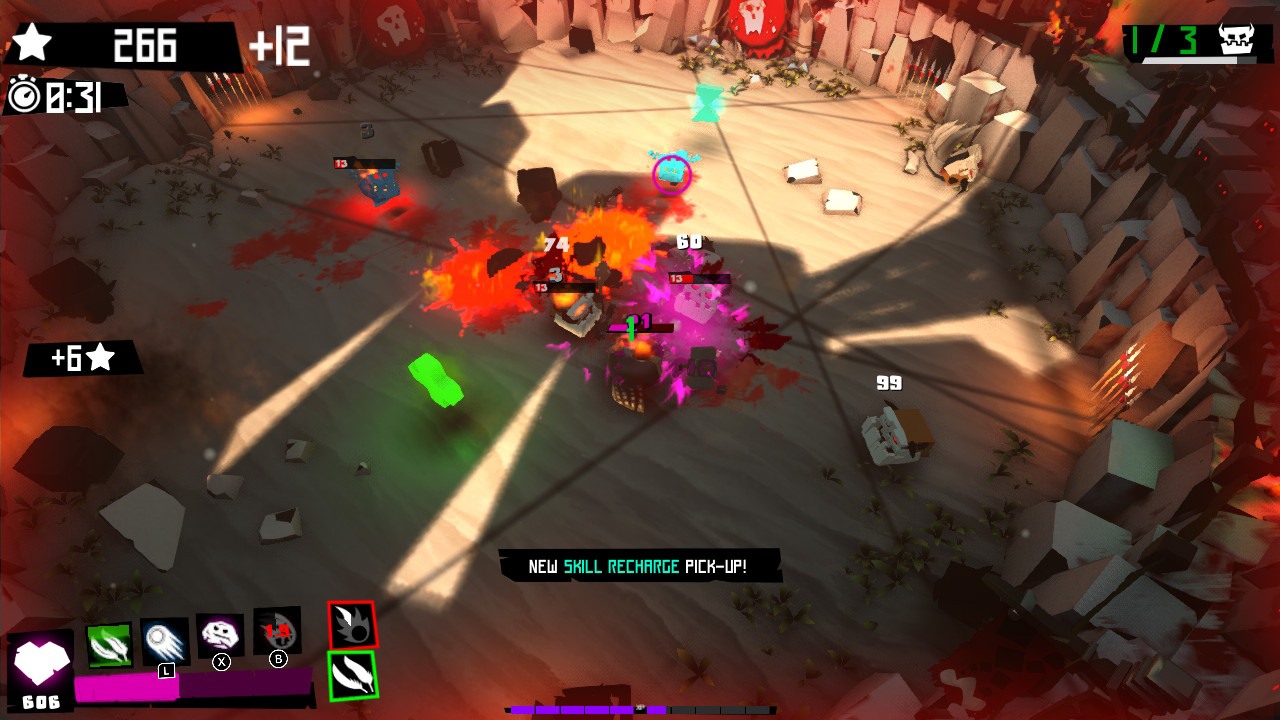 The cartoon style graphics and vivid colors of Cubers: Arena are cheerful and attractive. At the opening of the game you also have the option of either turning off blood splatter or changing it to black rather than red, which is a nice feature to have although as you can see from the screenshots, I left the typical red blood splatter. There are varying weather conditions such as rain and fog, and the daylight can vary from being bright midday, late evening with long shadows, or night with varying degrees of darkness. The bouncy movements of the characters adds to the cartoony feel, as do the exaggerated attack animations.

The music for the game is well done, with lovely peaceful music for when you are in the Oasis, and battle music that is exactly what you would expect for an arena battle. The accompanying, ambient noises, such as background sounds of the crowd and swings of weapons, fit perfectly with the overall theme, being both subtle and immersive. 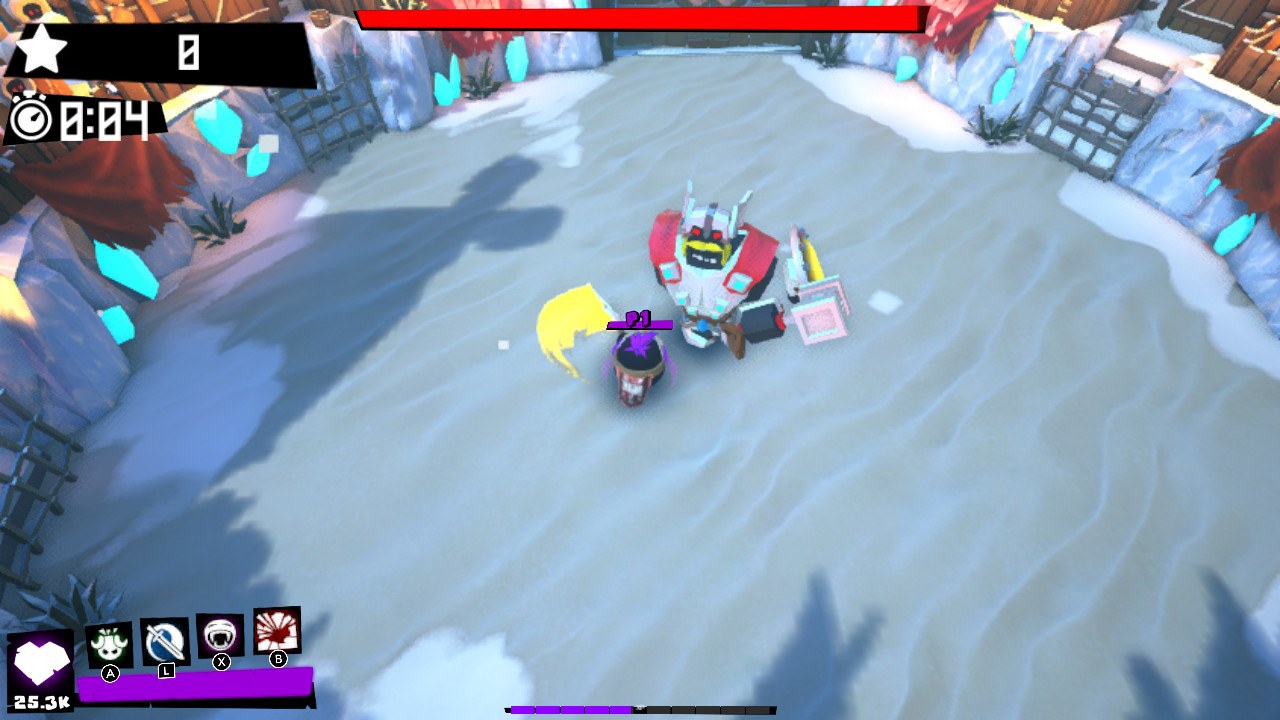 While Cubers: Arena is a fun diversion from the stresses of life, it also is not one that I would play over and over again. The campaign is short and relies on you replaying the same campaign at higher difficulties. The multiplayer is fun, but I wish it allowed for online play. For the price however, this game is a great one to have in your gaming library for when you are looking for an arena battle game to just get and smash enemies. The multiplayer mini-games also offer some fun, short games for when you have friends over and are looking for something quick to laugh with. Also, with the option to turn off blood splatter, certain mini-games could even be very fun and appropriate for children, providing a chance to play dodgeball inside or to stop mushrooms from spreading across the arena. Overall, Cubers: Arena is a very enjoyable game and offers a lot of variety for the price.