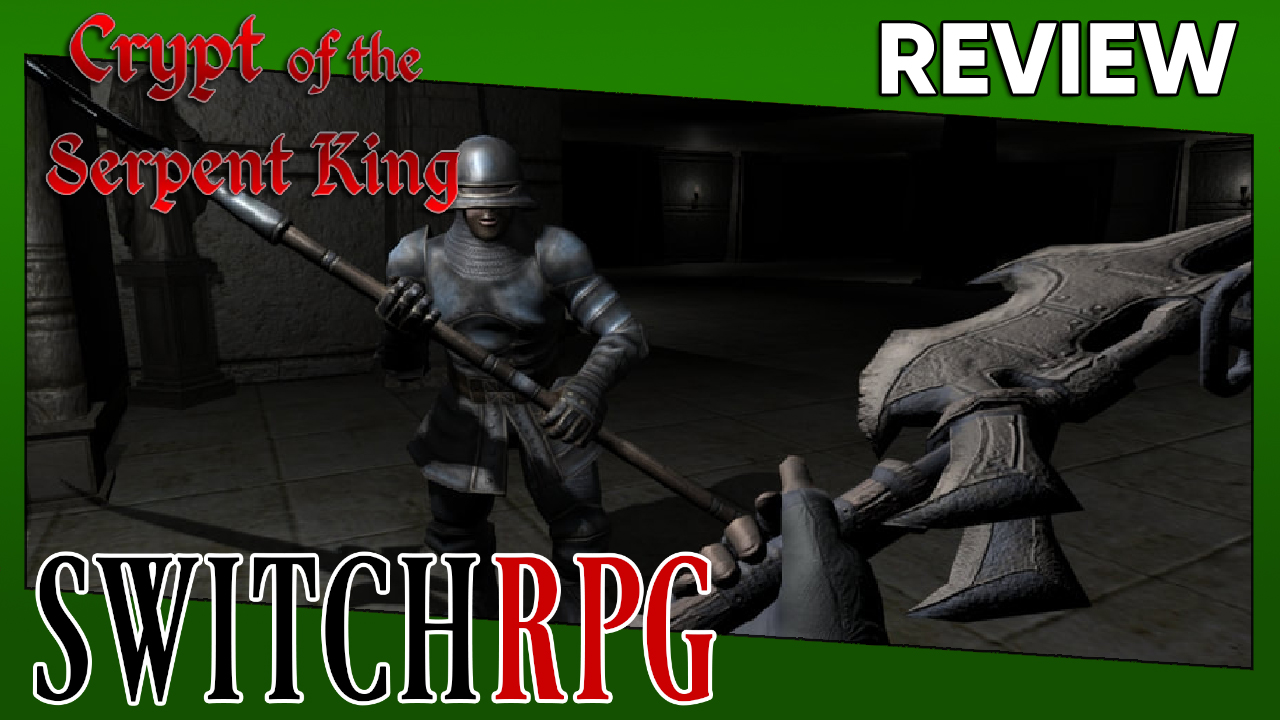 Role-Playing Games tend to rely on their versatility and degree of player choice, as individuals are given the opportunity to creature a variety of builds. Sometimes, a game offers an extremely linear experience in order to focus on the strength of its story, or the more compelling elements of its core gameplay. Often, an RPG is a budget buy, priced affordably in order to showcase its key mechanic. Crypt of the Serpent King falls into that category.

From the moment you first spy its Switch menu icon, you more or less know what you’re in for. Crypt of the Serpent king combines first-person dungeon crawling with randomized level design in order to deliver a bite-sized RPG experience that overstays its welcome long before you’ll reach the lowest levels of its hazardous, maze-like design. What makes this small roguelike a forgettable experience? Read on and find out. 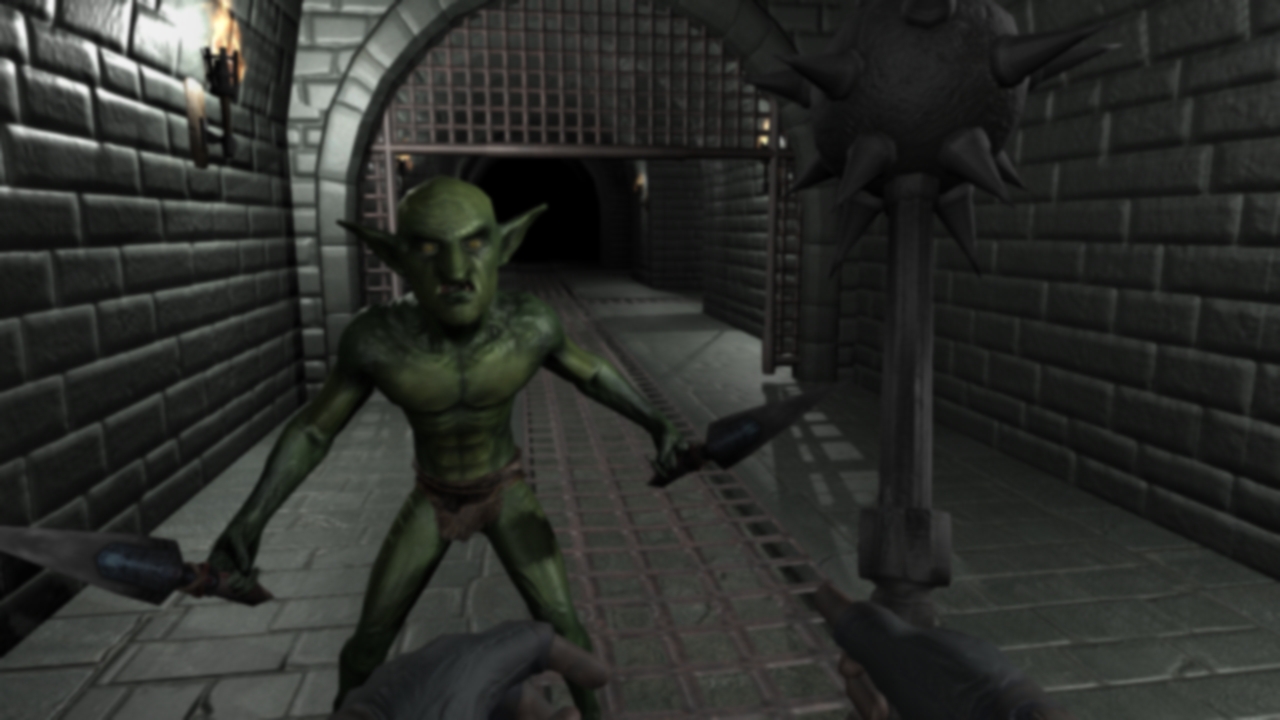 As a first-person dungeon crawler, Crypt of the Serpent King relied heavily on the limitations of its perspective in order to drive up tension and present challenge. The player is some mysterious dungeon man, armed from the outset with a sturdy-looking axe, one-hundred hit points, and a handful of dreams. Your objective is to find a specific number of keys per floor of the dungeon, allowing access to a lower layer where you’ll take on a boss fight and move on to the next level.

The experience system in Serpent King is a bit strange, in that you don’t get to distribute gained EXP until you’ve finished completing your current floor. It’s obviously meant for balance reasons, as gaining the opportunity to either hit harder, take less damage, or move faster in the middle of a level might make things too easy. Likewise, enemy damage and HP scales evenly with each level upgrade, so allowing the player to boost these stats really only evens the playing field. Even with these buffs, however, the only major factors of combat are reaction time and enemy animation cycles.

If you see an enemy approaching, chances are, you can weave in and out of its melee range and cause it to start one of its attack animations. If you’re fast enough, you can interrupt it with one of your own attacks, or if you don’t want to risk the shoddy collision detection, wait until the animation is finished and strike with your own. If your interrupt, you’ll cause the enemy to reset their stance, at which point, you can likely sneak another hit in and defeat it. If you wait for the animation to finish, it’s a simple process of rinse and repeat. 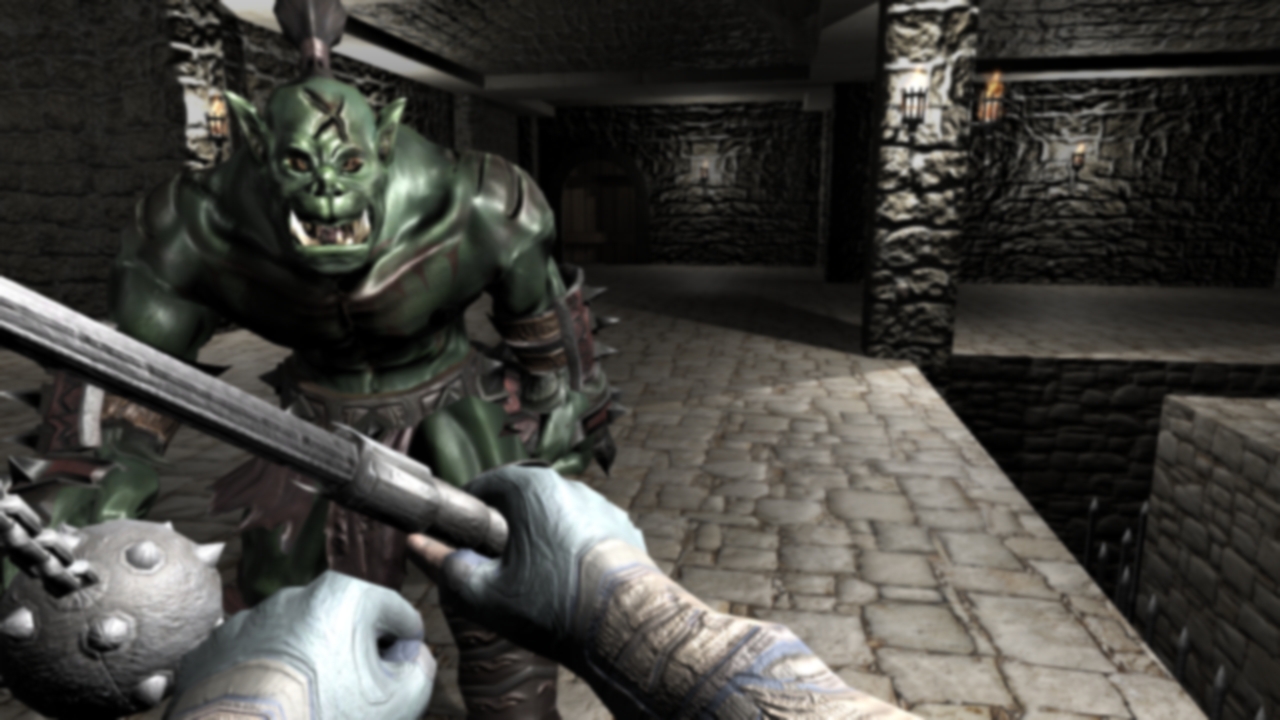 That is the depth of combat, as a whole. I wish I could say that enemies deepen in complexity, but that is not the case. The only two scenarios in which combat is complicated are when you draw the attention of more than one enemy, or when they spawn late and on top of you as the level is generated, resulting in an awkward exchange of blows. While it is possible to let your guard down and get smacked a few times, you’ll find yourself growing accustomed to the ebb and flow of combat rather easily. Down the line, you’ll get the opportunity to access one of two ranged weapons, and though they possess limited ammo, you’ll find plenty strewn throughout the world in treasure chests.

If you are in a corridor that does not host a key pedestal, you’ll likely see one or more of these chests laying around, and once you’ve unlocked the crossbow or bow and arrow, you’ll find that more than half of these chests per floor have arrows within. Otherwise, you’ll either find meager restoratives or money within, which can be used to survive or buy new weapons in-between levels, respectively. 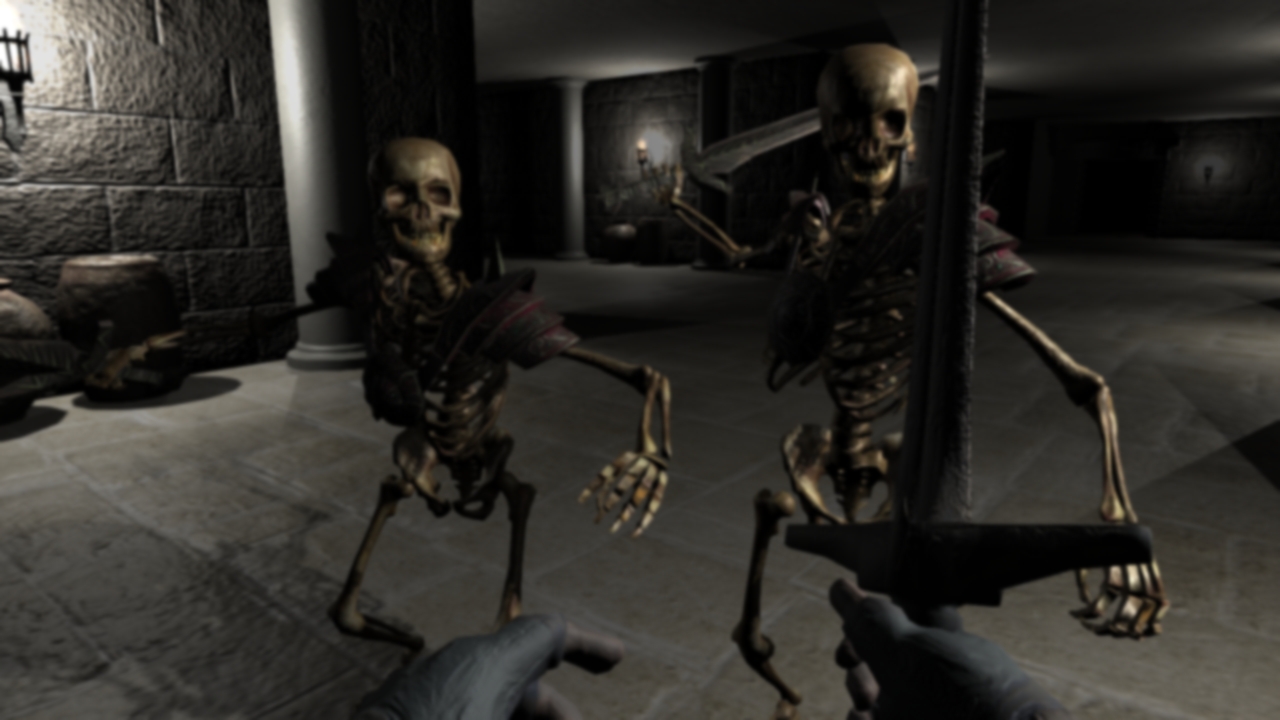 Seeing as the narrative of Crypt of the Serpent King is… well, kill the Serpent King, the only subject left to discuss is level design and aesthetics. I’ll give developer Rendercode Games credit where it’s due: the game’s character models are impressively detailed, and their four-to-five animation loops are competently executed. You’ll find gross rat-men, ogres, halberd-bearing knights, skeletons, and yes, serpents on your way to slay the titular King, but apart from these designs, there isn’t much to look at. This is partially because roughly half of the levels are extremely dark, relying on the sparse torchlight in order to reveal enemies and details, but also because everything is more or less painfully generic.

You’ll fight through sewers and castle corridors, and though there’s a surprising inclusion of interactive doors later in the game, there’s not all that much to catch the eye, or the imagination. There’s a sewer gate that spews green gas on the second floor, but its one of the few animated environmental elements. While characters animate slowly (but surely), there’s not a great amount of visceral reaction to weapon strikes. Sound effects are bland, as is music, aiming for a murky fantasy tone that picks up and recedes with each new enemy encounter. If there were more to say on the subject, I’d gladly write more. 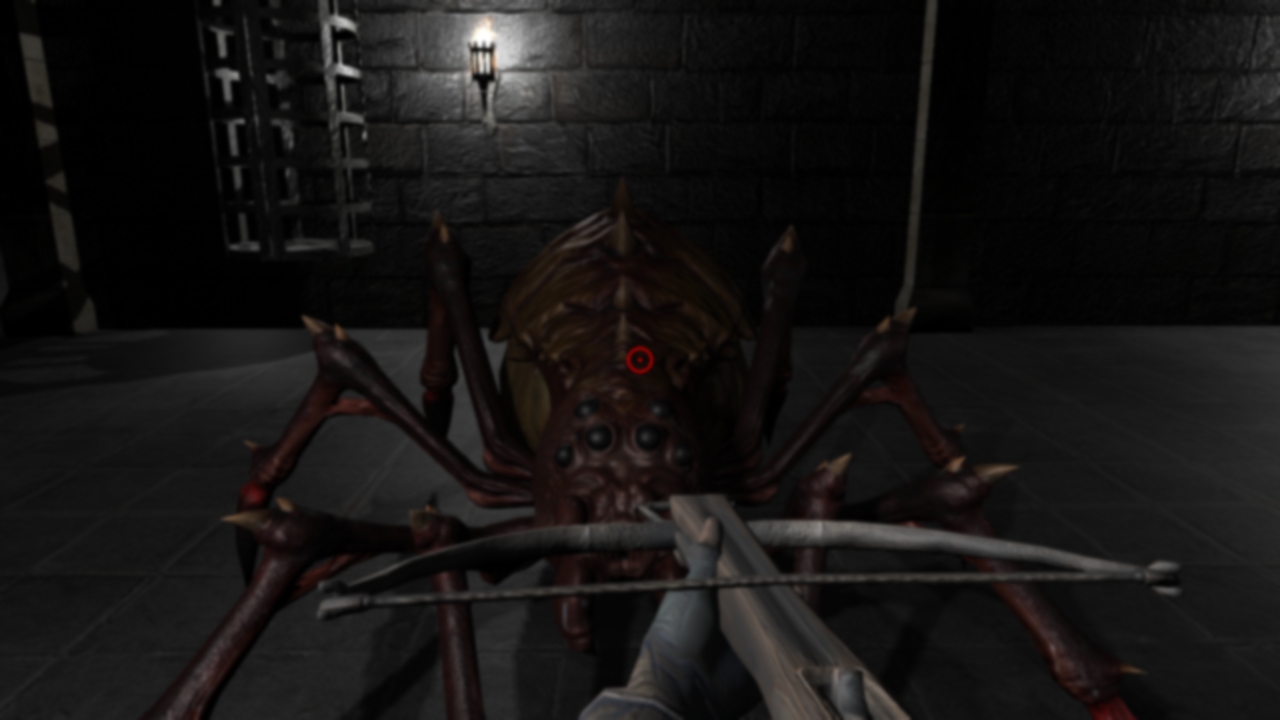 Most of the difficulty present in Serpent King comes from learning the ropes and figuring out how enemies attack before falling into a predictable rhythm. Despite the randomized nature of the dungeon maps, this can often be to the game’s detriment, as corridors and rooms are so similar, the only way to ensure that you’ve obtained everything is to exhaustively comb them during a first run through. Though you might be able to avoid enemy encounters for some time, their aggression seems rather persistent, and its likely that you’ll find yourself slaying each enemy you come across separately so that you don’t have to deal with the hassle of group fights.

The most frustrating aspect of exploration comes from the traps set in each dungeon room, which are simplistic flamethrowers and lava and spike pits. The collision detection on these is also suspect, as I found myself burned several times despite hugging the key pedestal, and a number of my early-playthrough deaths came from not clearing the pits with the jerky jump animation the playable character possesses. My only advice would be to practice jumping several times before making an attempt, just to be sure. 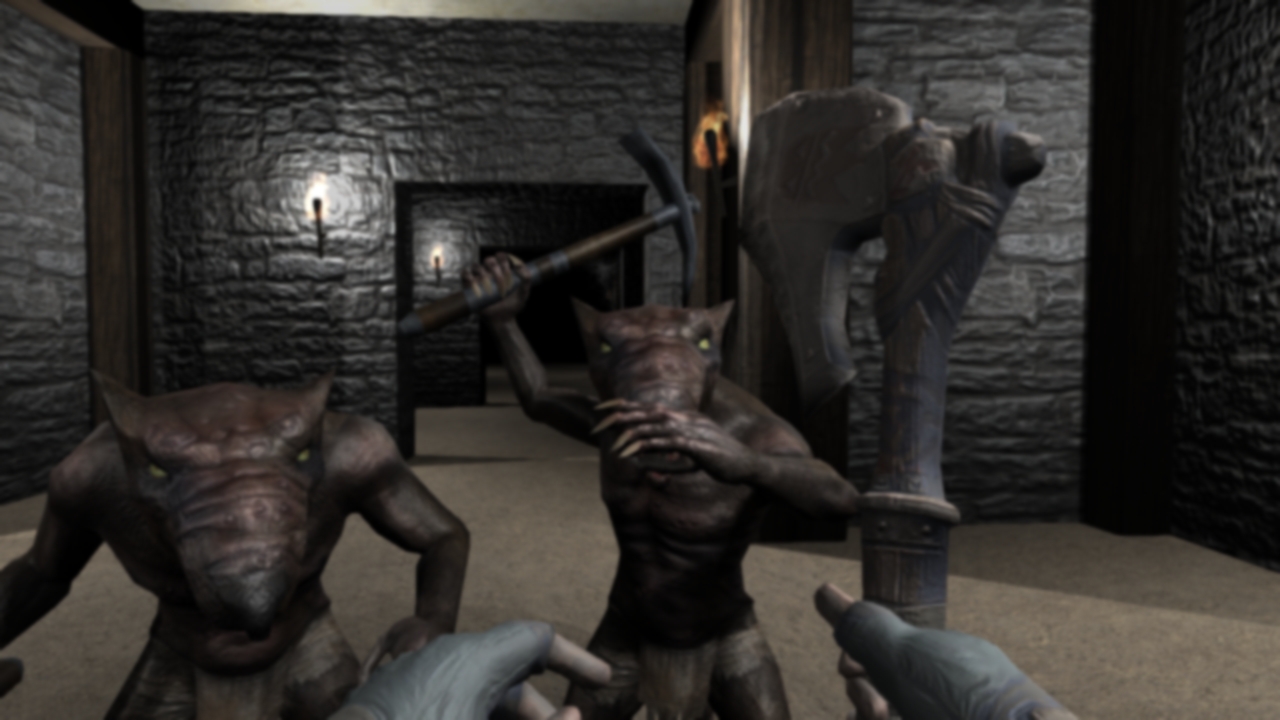 Combat could have been salvaged by a greater weapon variety, but the only reason to change from one equipped weapon to another is for a pathetic increase in attack distance- and yes, we’re talking an incremental 1.35 to 1.45 meter kind of increase. While the weapons are well-textured, with each possessing its own attack animations, there’s not much to be gained once you’ve saved enough money for the broadsword. The most aggravating element present in combat is the way damage is indicated, appearing as a loss of HP on your quick-access mini map tool and an obnoxious red filter that obscures vision for a short duration, essentially improving the enemy’s chance to sneak another hit in.

With bland enemy and boss encounters, a wonky progression system, and three difficulty options that steadily ramp the challenge and replayability if only because they punish failure more stringently, one would do wise to steer clear of Crypt of the Serpent King unless they are dying to spend the three dollars. Mind you, you’ll definitely get what you’ve paid for with that money, but there are other action-based, first-person Role-Playing Games out there that do the job better than this. While the game is an admirable attempt to create a continuously-rewarding experience, those rewards deplete within an hour of booting up the title.