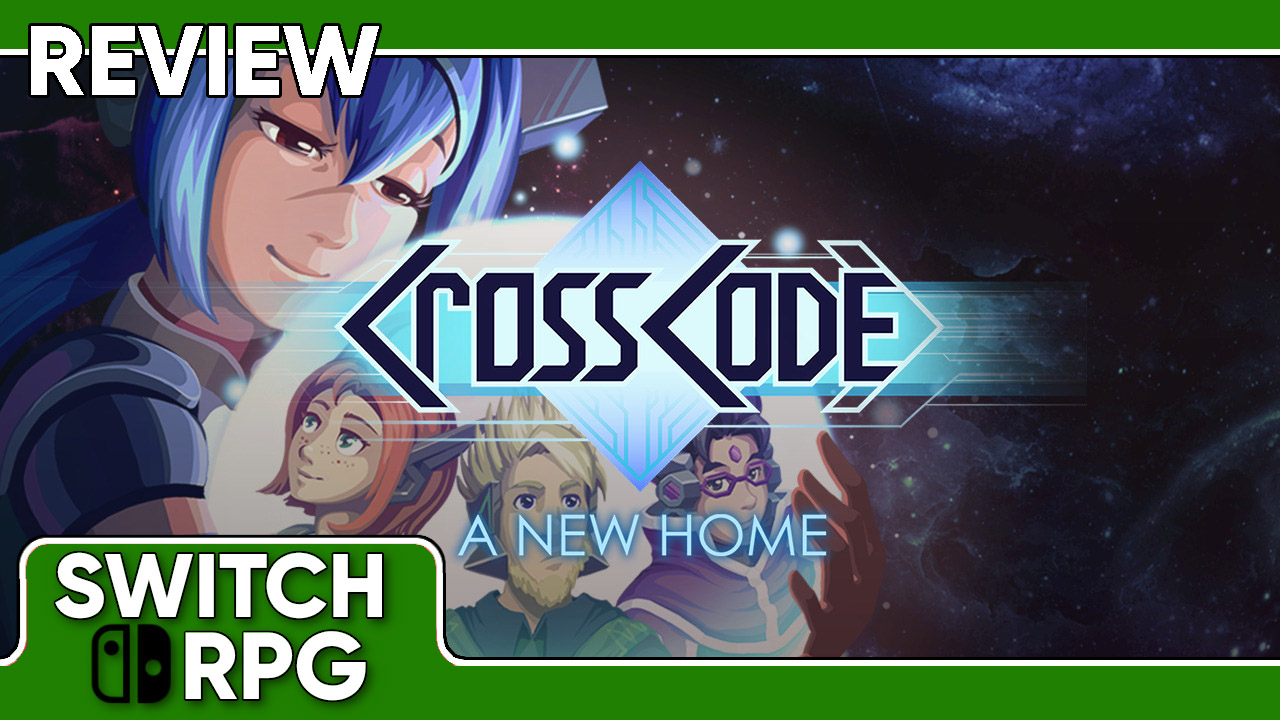 It’s been just shy of a year since I last visited CrossWorlds, the life-like pseudo-MMORPG developed by the fictional Instatainment Ltd. and located within the actual single-player action-RPG known as CrossCode. If you haven’t heard of CrossCode by now, it’s a 16-bit indie gem from real-life German studio Radical Fish Games that mixes Zelda-style dungeon crawling, Secret of Mana-esque combat (but on steroids), and cleverly constructed environments that are often no less bewildering to explore than the game’s proper puzzles are to solve. Although I didn’t have the honor of reviewing CrossCode back when Deck13 Interactive brought it to the Nintendo Switch in July, 2020, I fully concurred with Rich’s assessment published a few months ago that CrossCode was ‘one of the most impressive indie titles I have ever played.’ I couldn’t wait to see what further adventures awaited Lea, Emilie, and the rest of the cast that made the main campaign such a heart-warming, memorable, and challenging joyride. With the new DLC dropping on the Switch this month, appropriately titled A New Home, that wait is finally over. 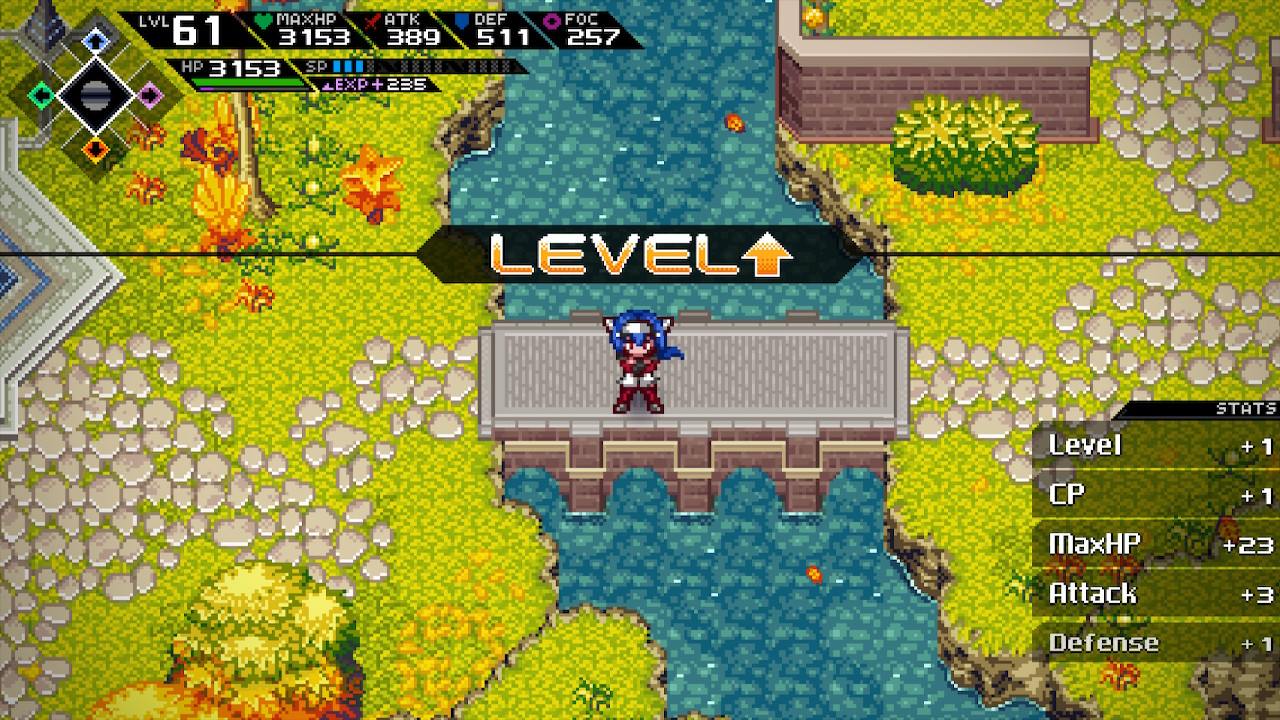 As A New Home requires players to have previously finished all ten chapters of the main game, as well as achieved the ‘good ending’ (which can be done at any time so long as you’ve reached the final boss) before proceeding to the DLC content, I’ll assume that anyone reading this is more or less familiar with the narrative up to this point. That said, I won’t divulge any critical information.

A New Home picks up exactly where CrossCode concluded. Lea, the game’s lead protagonist, is brought back into the MMORPG simulation after having been absent the preceding seven months. As expected, there are a lot of cheerful reunions, lots of hugging, and a bit of debriefing that the developers (the real ones, not the in-game-only Instatainment Ltd.) shrewdly worked in by having her fixer Sergey put a series of ‘Yes’ or ‘No’ questions to Lea, intent to know what she—or rather you, the player—actually remembers from the last go around. Since it had been considerably longer than seven months for me, I keenly felt the effects of Lea’s mental fog as though it were my own.

CrossCode does an outstanding job of storing nearly every piece of data you discover in a tightly organized compendium, from items and quests to characters and shops, and its storyline is no exception. At any time you can read an extensive overview about each of the game’s prior chapters, and this is what I basically relied upon to bring myself up to speed. Whether I was asking myself, ‘Who is so-and-so again?’, ’Are they an Avatar or an Evotar?’ ‘Wait, what’s an Evotar exactly?’, and yada yada yada, there was much that I didn’t recall and A New Home doesn’t go too far out of its way to refresh your memory on the finer details. 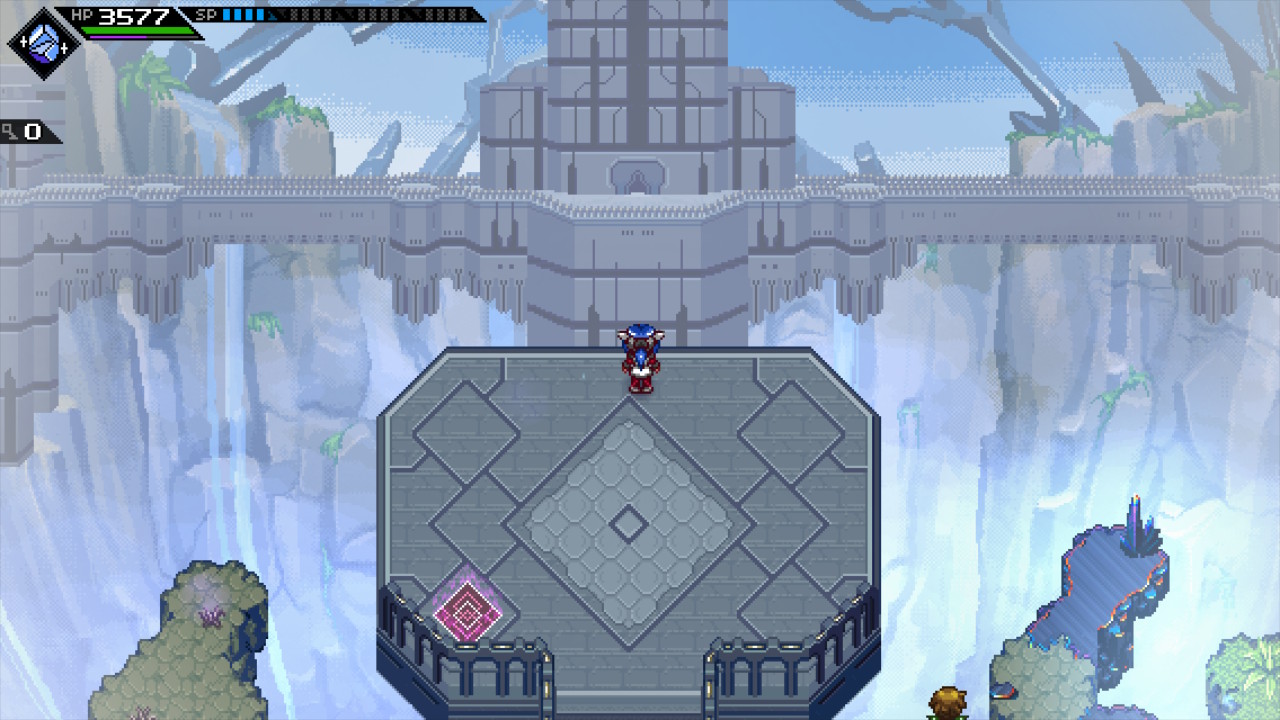 All of that is fine, however, as the pretext for A New Home’s additional chapters essentially boils down to three key points: 1) tying together a few remaining loose ends leftover from CrossCode’s narrative, including 2) the completion of the Para Island raid, and 3) the Ku’lero Temple, Instatainment Ltd.’s latest expansion within CrossWorlds and its ultimate challenge. Ku’lero Temple is the last obstacle on Operation Trackwalker’s checklist in the quest to uncover the secrets behind the Track of the Ancients, the mysterious lore that underpins the virtual realm of CrossWorlds. It’s the central attraction in A New Home and represents CrossCode’s biggest dungeon to date.

If there is one thing to be said about CrossCode’s dungeons, it’s that they are massive. I haven’t taken the pains to do any kind of rigorous measurement but having just completed Skyward Sword HD, if those dungeons are taken as characteristic of the typical length of a Zelda dungeon, then I’d estimate CrossCode’s elaborate complexes to be somewhere in the ballpark of twice the size. Ku’lero Temple is even more enormous, and if you liked CrossCode’s unique brain-teasers, A New Home has you covered.

I won’t discuss the intricacies of CrossCode’s combat, with Lea’s range of melee and projectile attacks that rely upon different elemental properties, or the general ways in which dungeons integrate these into sophisticated contraptions that players must carefully decipher and then manipulate in order to proceed to the next room. With regards to these, A New Home doesn’t alter any of the base game’s fundamentals. I’ll simply say that when it comes to CrossCode’s puzzles, A New Home being no exception, I am of two minds. One can neither deny nor understate the brilliance that went into the design of many of the game’s enigmatic apparatuses. From the immense amount of forethought they require in understanding their basic logic to the actual execution of the mechanisms involved, sometimes as simple as shooting an object off a wall from the correct angle, in other instances guiding a ball of energy through a mazy series of barriers by using every one of Lea’s powers in her arsenal, you almost always feel satisfied when you’ve managed to stumble upon the solution. 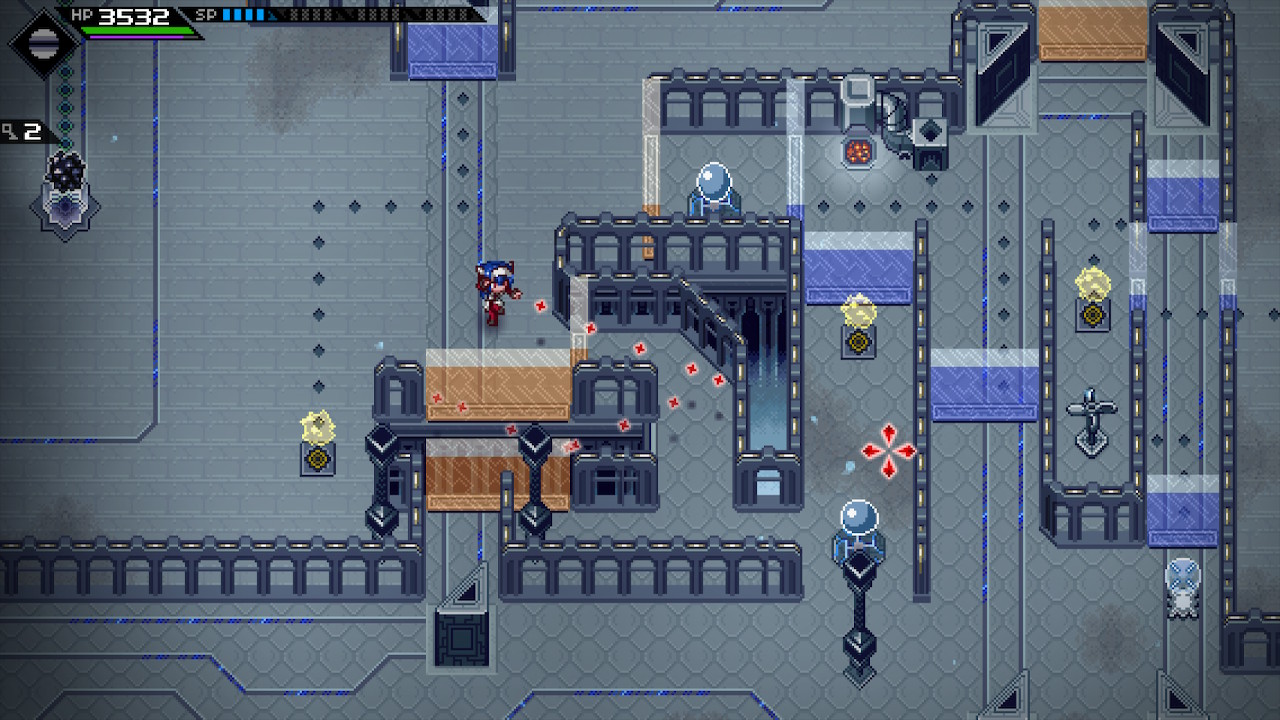 Then again, you also oftentimes feel downright stupid. At least I did. If Zelda’s puzzles can make a person of average intelligence feel like a genius, I suspect that even for smart people CrossCode’s challenges—and by extension, A New Home—may produce the opposite effect. I don’t want to sound as if I’m knocking the game for being overdesigned. I know that many will revel in the abundance of head-scratchers that await them in Ku’lero. All I’m saying is that, in my opinion, the puzzles are at times relentlessly brutal and vague to a point that my enjoyment, however slightly, did start to get affected. 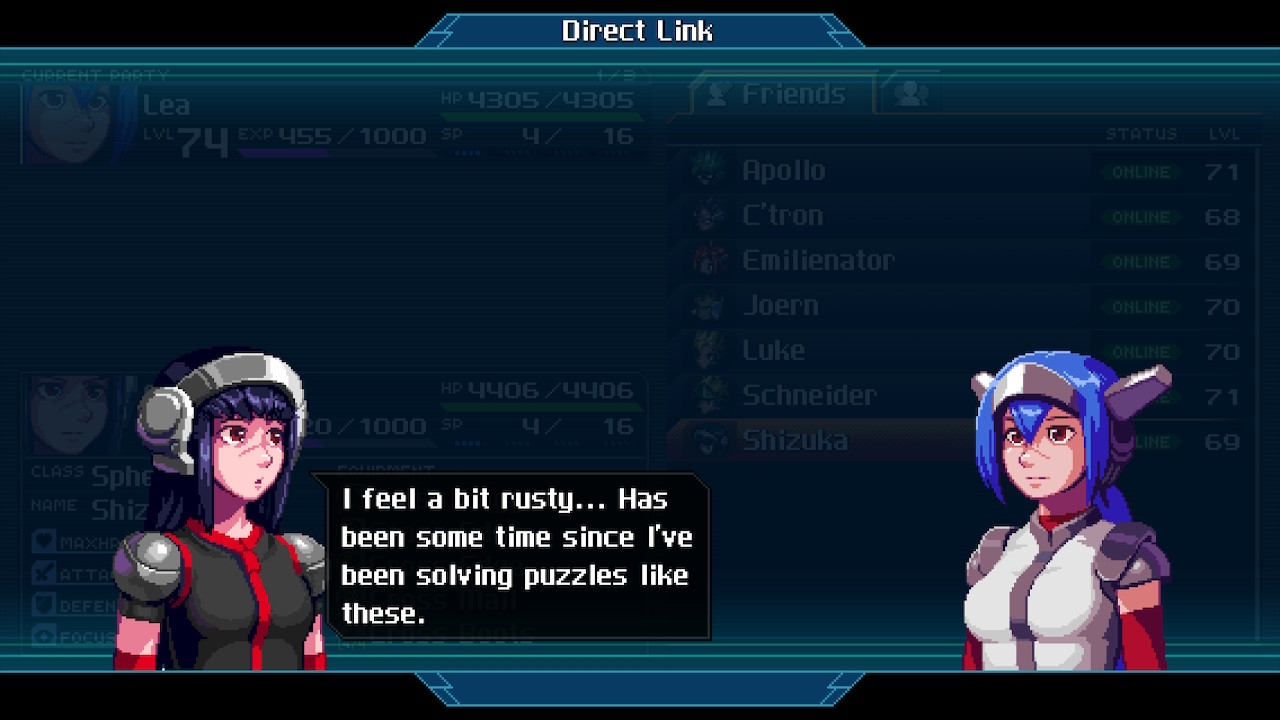 Be that as it may, there’s more to relish in A New Home both in and outside of Ku’lero, including some awesome boss fights, new areas to explore, and a bunch of fresh quests, one of which features an exhilarating car chase and a very unexpected cameo by a certain infamous time-machine! On top of this, now you can buy and trade ‘Ascended Equipment,’ i.e. weapons and armor that scale with Lea’s level, and last but not least, Lea even gets… a new home! Her very own house!

In short, there’s plenty of extra content packed in A New Home. Radical Fish Games claims ‘8-15 hours’ of additional playtime for the DLC but I’ve already poured twenty hours into it and still have multiple sidequests to do. At any rate, if you savored CrossCode’s gameplay loop as much as I did, you won’t be let down by the offering on hand here.

When it comes to pixel art, CrossCode remains an immaculate specimen. I thoroughly adored its rich colors and sharp details which somehow make platforming from a top-down 2D perspective seem palatable, save for a couple of examples where it can be difficult to measure height differences. Where aesthetics are concerned, A New Home is unchanged, thankfully, and the new areas to survey are no less appealing than the vibrant forested valleys of Autumn’s Fall or the white snowy gorges of Bergen Trail that CrossCode old-timers are already familiar with.

The soundtrack adds three brand new songs to the playlist. I had all but forgotten just how much I adored the music in CrossCode and the melodies exclusive to A New Home only reinforced this sentiment, maintaining the consistent quality that pervades almost every other aspect of CrossCode. 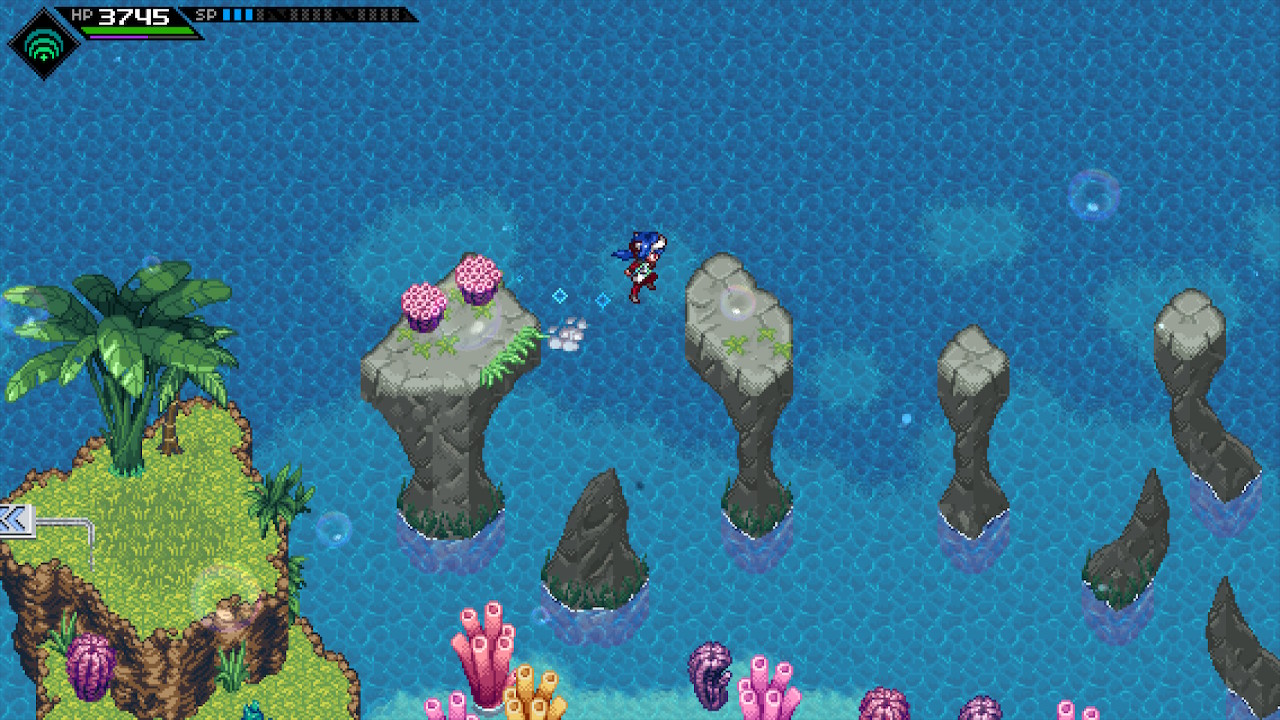 The game does suffer from some technical shortcomings. I encountered two bugs in my playthrough. One came about when attempting to toggle between tabs on a quest board. Despite multiple tries, it always repeatedly resulted in a software error at the exact same moment, forcing the game to shutdown. The other happened during a boss fight when I got soft-locked because the enemy somehow landed outside of the walled area in which the battle was taking place, preventing both of us from attacking one another. The other small annoyance that I encountered, not dissimilar from my experience of CrossCode a year ago, is the huge frame rate dips that occur whenever the action gets too intense or there are too many enemies on-screen, causing the game to stutter considerably.

None of these issues really detract from my overall feelings about A New Home’s presentation, which are overwhelmingly positive, but I do hope that they can and will be addressed for future players.

A New Home is not only the culmination of years of hard work by the small team over at Radical Fish Games, but the closing chapters in an unforgettable journey that I began eleven months ago when I was first initiated into the exciting domain of CrossWorlds. I never expected to be lured in as deeply as I eventually found myself, and A New Home is a fitting finale to those eighty-plus hours of bliss. Mostly bliss. A little rage.

In the end, the worst thing that I can say about A New Home is that it didn’t quite provide the same ‘oomph’ for me this time around. Not that I should have expected it to do so. After all, as DLC, it’s merely icing on the cake. The promise of A New Home was to modestly expand CrossCode’s story and world and deliver one gigantic labyrinth with some of the most thoughtful (and maddening) puzzles you will find across the action-RPG genre.

It kept this promise. My only prayer from here on out is that A New Home isn’t the last time we see or hear from Lea and friends. Or as our favorite blue-haired Spheromancer would say, 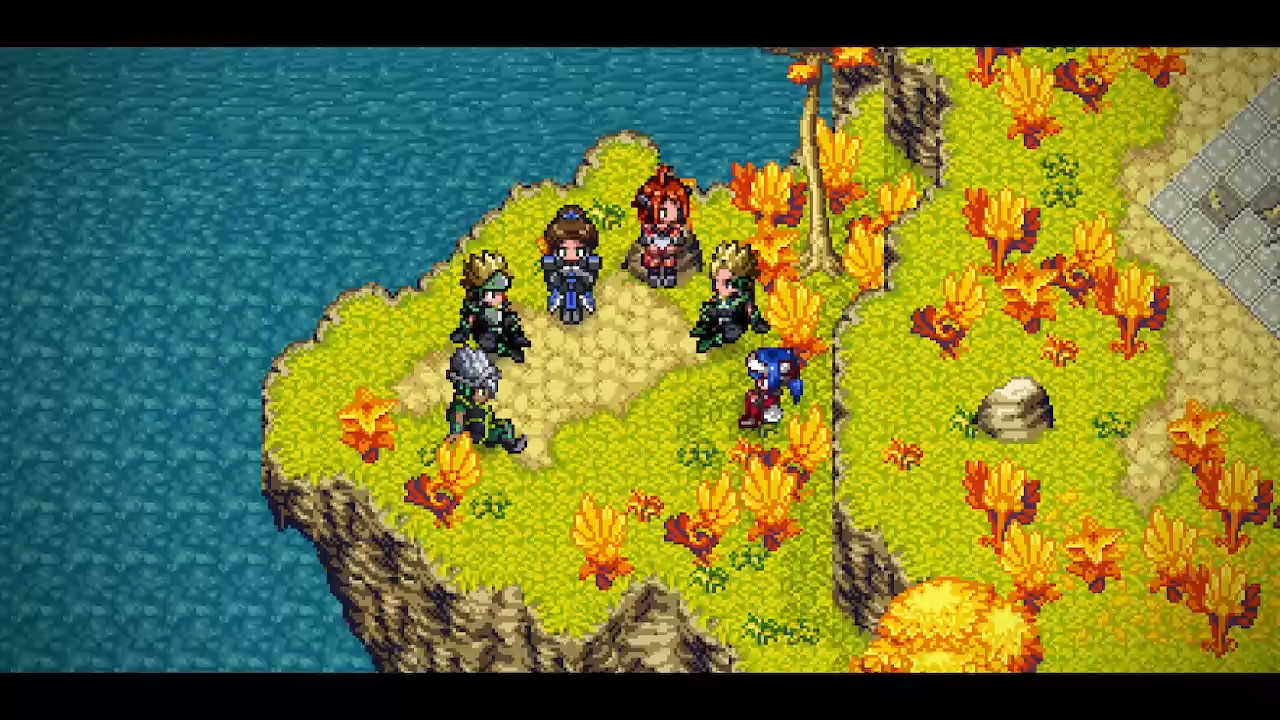