Creature in the Well Review (Switch) 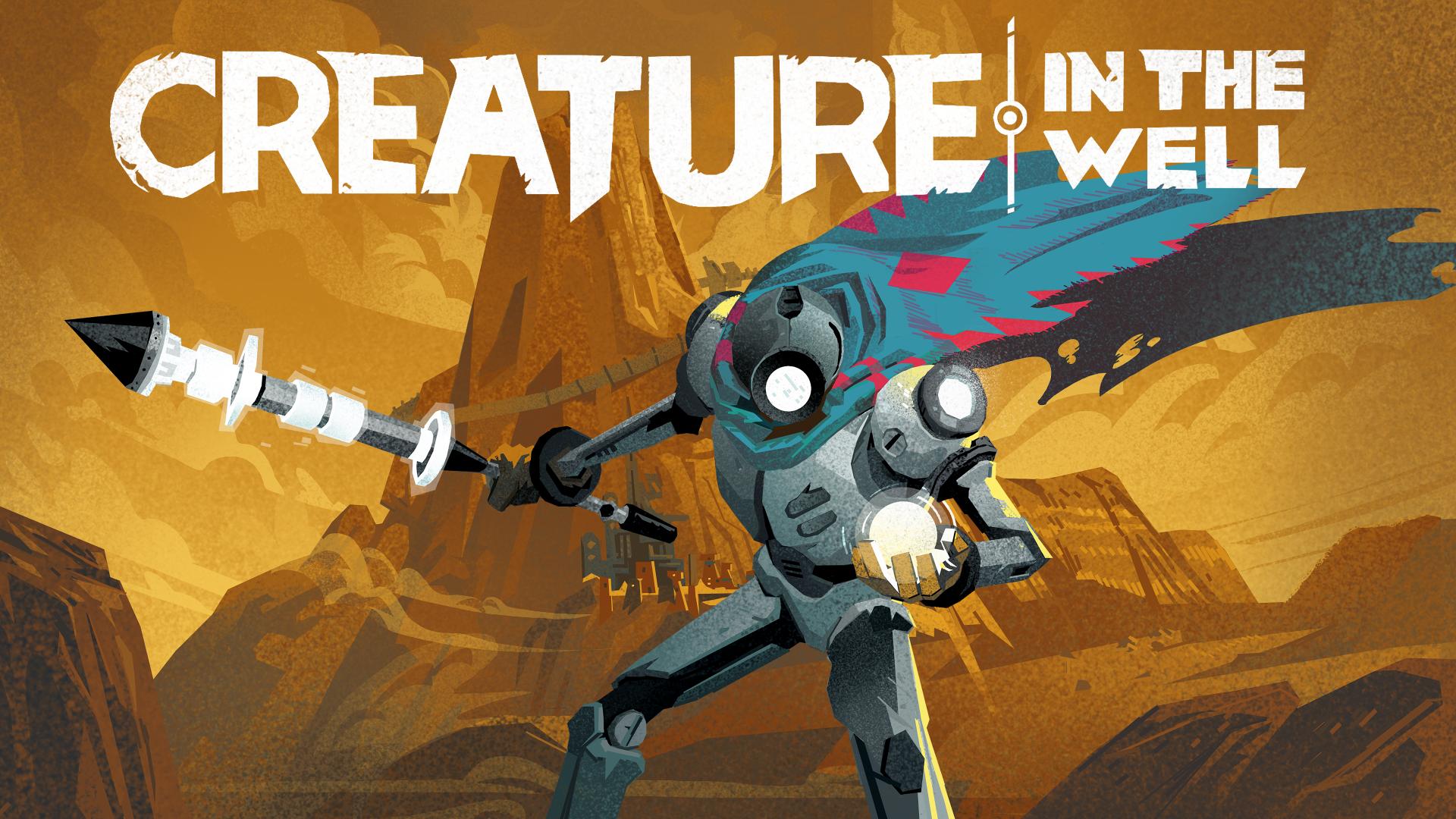 The eshop is home to many wonderful indies, giving developers a platform to be creative and push their wares. Earlier this year, I was very intrigued by the reveal of Creature in the Well during the Spring 2019 Nindies Showcase. Described as a “Pinball action adventure game”, the trailer alone was enough for me to immediately add the title to my wish list. The time has finally come, and the Creature is out haunting the well. How does this mash-up of hack and slash pinball action and dungeon crawling fair? Let’s dive into the well and find out. 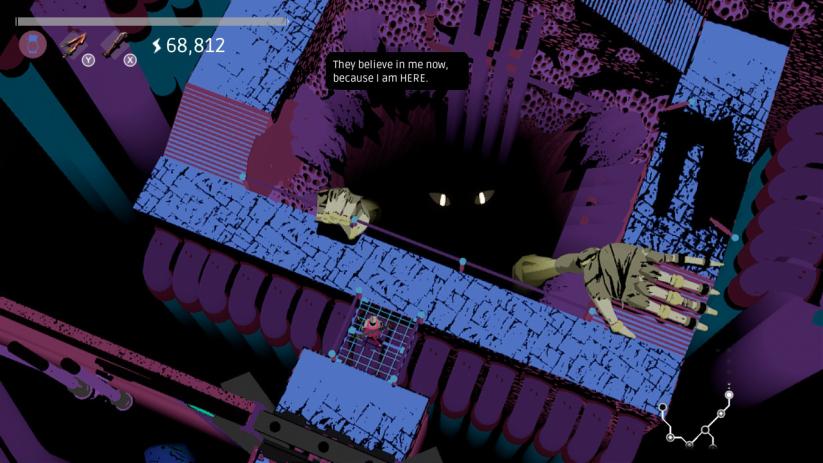 The story in Creature in the Well isn’t very complex: deal with the Creature and turn on the machine to save Mirage from the storm. You take on the role of BOT-C, the last remaining engineer of the robot collective in a world that has been struck by a devastating sandstorm. As BOT-C, you are forced to venture into a desert mountain in order to restore power to an ancient machine which controls the weather. In doing so, BOT-C hopes to be able to save the town of Mirage from the sandstorm. Restoring power to the machine isn’t as easy as it sounds, however, as the desert mountain which is home to the machine is also home to the Creature, who doesn’t want BOT-C to succeed. The Creature sets out to scare and prevent you from completing your mission. 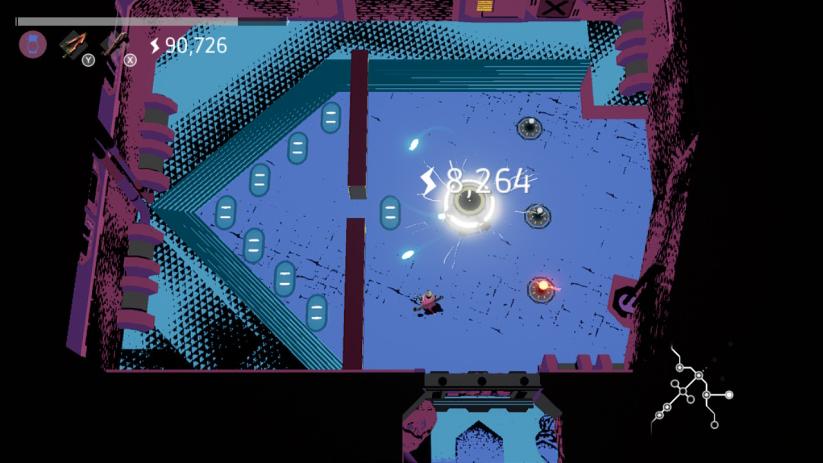 Throughout the five to six hour adventure you will find a few NPCs: one in specific being Roger T. Fox, a custodial-type figure who gives you advice and some back story about the machine and its creators. In addition, you will meet Danielle, who runs a shop which allows you to upgrade your Bot-Core. The last bit of back story regarding the machine and the Creature is presented via terminals you find within and at the end of each dungeon. 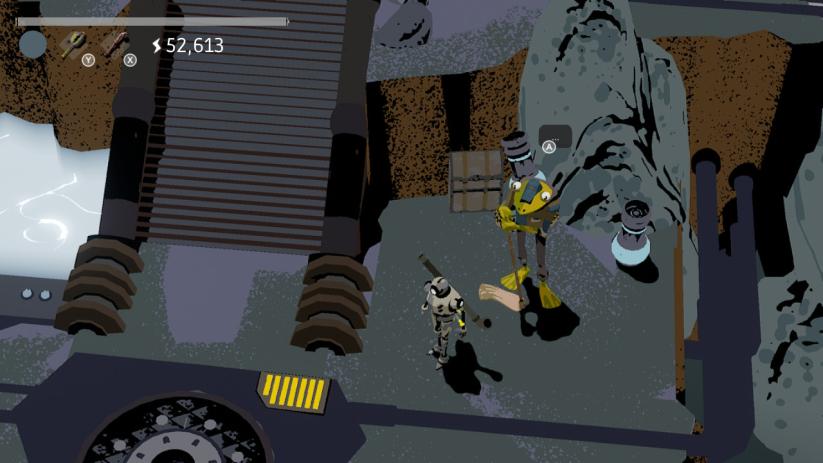 This is where Creature in the Well shines. Though it’s described as an action adventure pinball game, I found it to be a metroidvania-lite adventure title. Aside from the Creature, there are no other enemies in the game. Each dungeon has its own unique theme and is broken up into rooms, some having branching paths, with each door requiring an amount of power to open. To earn or collect power you must complete rooms, which are set up like pinball tables. It’s not traditional pinball where you control flippers, instead, you hack and slash the ball using the various items you find in order to direct it at the contraptions within each room. Doing so allows you to collect power to open doors so you can continue further into each dungeon. Though all doors have a power requirement to open, not all of them are mandatory to finish the dungeon. Some rooms have a specific puzzle that needs to be solved, others just have bumpers to hit, allowing you to farm power. The optional rooms are worth investigating, as usually they contain an upgrade that will help you on your journey, and are the best rooms in the game in regards to puzzle design. You can tell by the in-game map if a specific room hasn’t been completed as in addition to the clear branching paths, some rooms have alternate secret paths if you complete a room’s objective. As you make your way deeper and deeper into each dungeon, you will eventually encounter the Creature. These encounters involve the creature pulling the player down into the machine for a boss fight. These events re-hash contraptions presented earlier in the dungeon with the additional inclusion of the Creature mixing things up. These boss fights start out simple, but become very intense later on, as you try to solve the puzzle and dodge the Creature’s attacks. 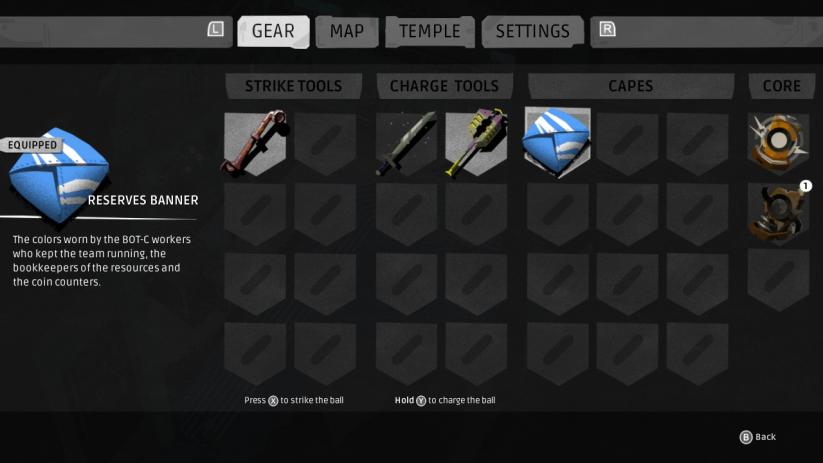 In the hidden rooms within the dungeons, you will find a few different types of items and upgrades. You can find cores, which can be brought to Danielle, allowing you to upgrade BOT-C’s health. You can also find outfits in some of the rooms, though the true jewels to be found are the new weapons. These weapons don’t make the puzzles or the Creature easier to defeat, but offer you more options when trying to solve a room’s puzzle. For example, one item can slow down time for a few seconds, and another has magnetic properties that can attract balls to you, making charging up shots much easier. With that said, there are two types of weapons: strike tools, which hit the ball in the direction you are facing, and charge tools. Charge tools allow you to catch a ball, hold it, and charge it up. You can then swipe it away in a different direction, with the charge ability allowing you to restore more energy to contraptions faster, expediting clearing rooms. 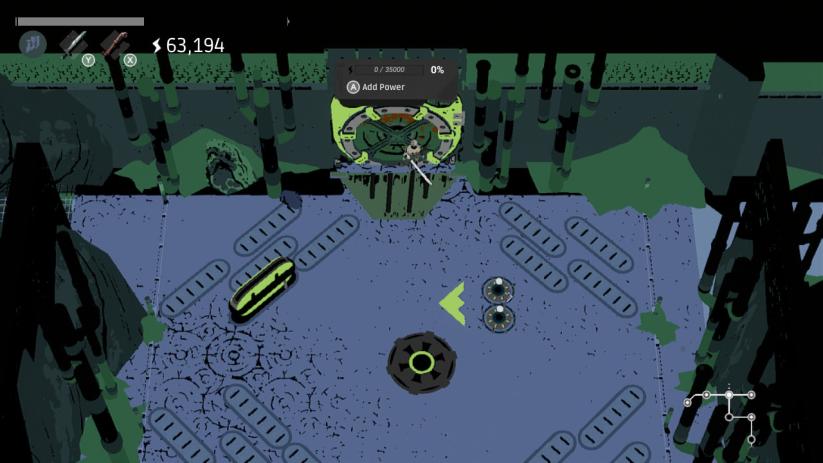 Developer Flight School Studio has found a way to combine exploration, fast paced hack-and-slash, pinball, and dungeon crawling all into one neat package that doesn’t overstay its welcome. I did find the game to have some difficulty spikes, with the early dungeons being rather easy and the last one getting very hectic. The game does experience some slow-down at times when the screen gets busy, but otherwise I noted no technical or performance issues. I did notice that, if you leave the game in standby mode, the in game timer continues to run while the Switch is in sleep mode. I reported this to the developers, who stated they are working on a patch for the issue. In addition to the great action and additive hook that keeps you wanting to see what’s in the next room, Creature in the Well has a fantastic visual style and soundtrack that blend harmoniously well with the action. Aside from a few minor complaints- and wishing the game offered a bit more depth with character upgrades- it stands as one of my favorite games on Switch this year. I highly recommend giving it a look.