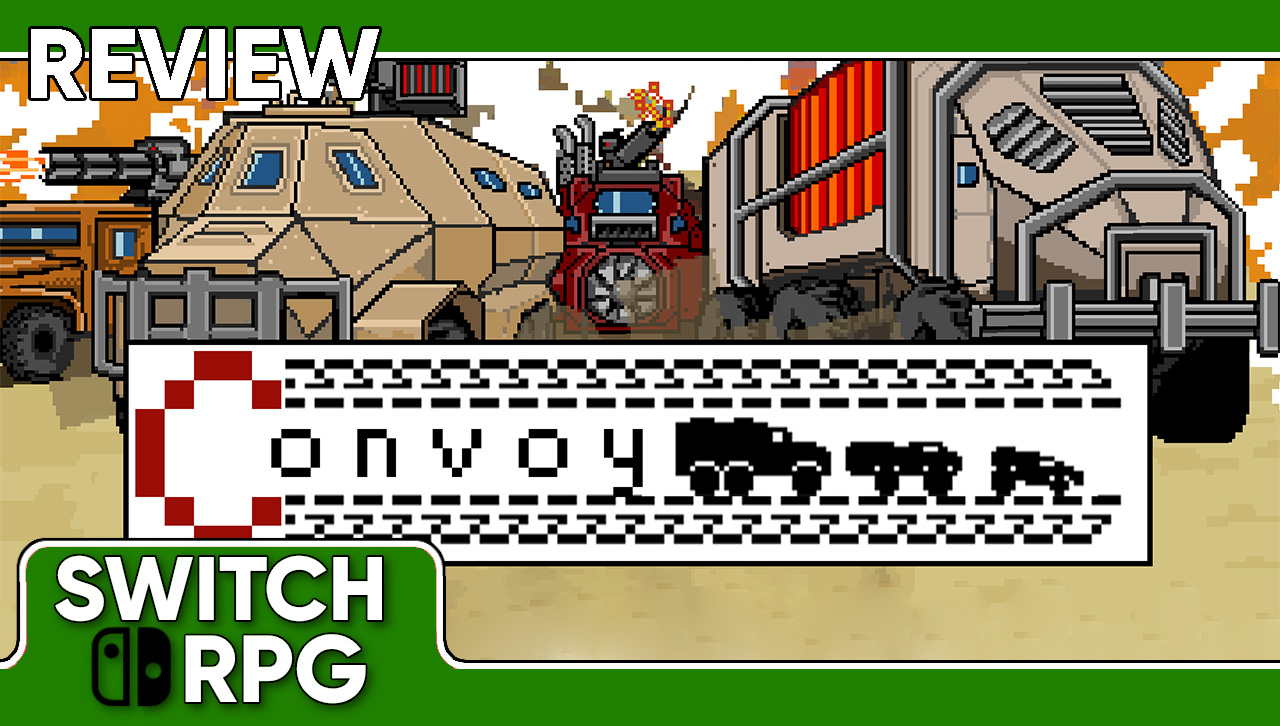 What happens when a tactical style roguelike meets “Mad Max” inspired wastelands and endless vehicular battles? It’s Convoy, of course. Vehicular roguelikes aren’t as renowned as they once were back in the days of arcade cabinets, but Convoy Games presents us with their namesake title in an attempt to tap into some vehicular nostalgia. Nostalgia can be finicky, however – will it shine through in Convoy, or will its brutal difficulty leave it abandoned in the roguelike wasteland? 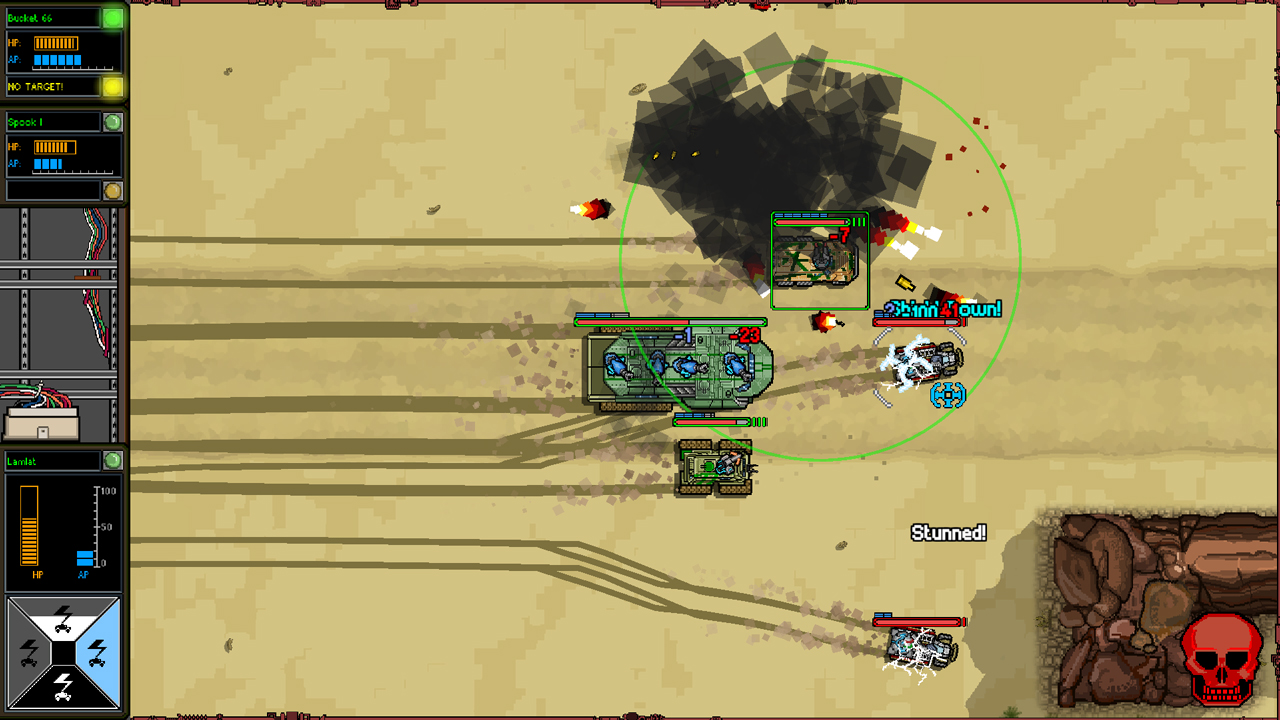 Marooned on an outlying planet, your space force must set out to gather parts in order to repair their ship, before continuing the journey into space. This requires exploration of planet Omek Prime, a post-apocalyptic wasteland which acts as the player’s first phase of gameplay. You set out on a vast, but sparse map looking down from an over-the-top perspective. Salvaging parts is key to surviving the wasteland, and the exploration is fun to experience visually with Convoy’s rich 8-bit graphics.

You’ll quickly notice there are no predetermined directions to set out in, but it doesn’t take long to discover the benefits (and dangers) of straying off the quickest route forward. For example, choosing a rockier, uphill terrain could lead to the crew salvaging rare and useful parts while also avoiding numerous enemies. That doesn’t mean you will have made anything easier for yourself, however, as fewer enemies usually means STRONGER enemies in Convoy.

This is where the next phase of gameplay begins. Omek Prime happens to be crawling with scavengers from three other factions that are battling it out for control over the derelict planet’s resources – contact with them is inevitable. What follows is a series of dialogue sequences that will decide what happens next. Diplomacy rarely wins out on Omek Prime, so you’ll have to take them out…”Fury Road” style. Once battle begins, your main vehicle (CMV) will be in the center and you must protect it all costs. If not…game over. The ZL and ZR shoulder buttons allow you to switch between your support vehicles and strategically position them both to attack and defend the CMV. The controls work well enough here, but it’s a shame that the Switch’s touchscreen functionality isn’t an option considering the battle area is mostly grid-based. Occasional slowdowns are also possible when switching between vehicles during the most heated of battles with multiple enemies. 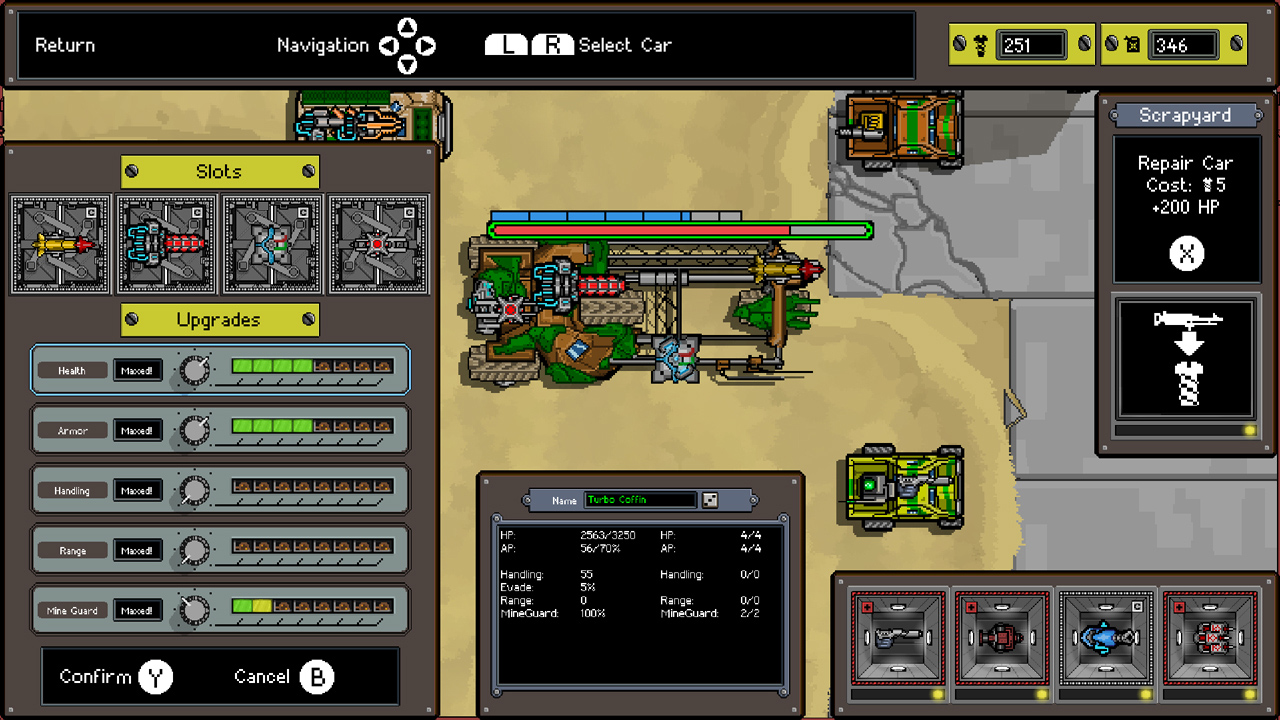 Battles are rather benign in the first stages of Convoy, but it doesn’t take long for the difficulty to spike…with a vengeance. I struggled to keep my support vehicles “alive” from the early stages of the game, but it wasn’t much of a problem considering my CMV was a literal and physical tank of destruction. Enemies become stronger rapidly, however, and I began failing once my CMV wasn’t strong enough to support the Convoy alone through battle. The only way I could counteract this was by scavenging for Leech Bots (salvageable upgrades that absorb enemy’s HP). Even after this, I found the spike in difficulty to be a little too frustrating for my own tastes, especially considering the lack of a save options available.

As mentioned earlier, the captain of your broken-down ship has tasked your Convoy with traversing the 8-bit wasteland of Omek Prime in order to salvage parts necessary for the ship’s repair. The captain somehow has ascertained some insider information regarding the location of some of the more essential parts, and the only thing left to do is survive the onslaught of attacks from the native warring factions while gathering said parts. 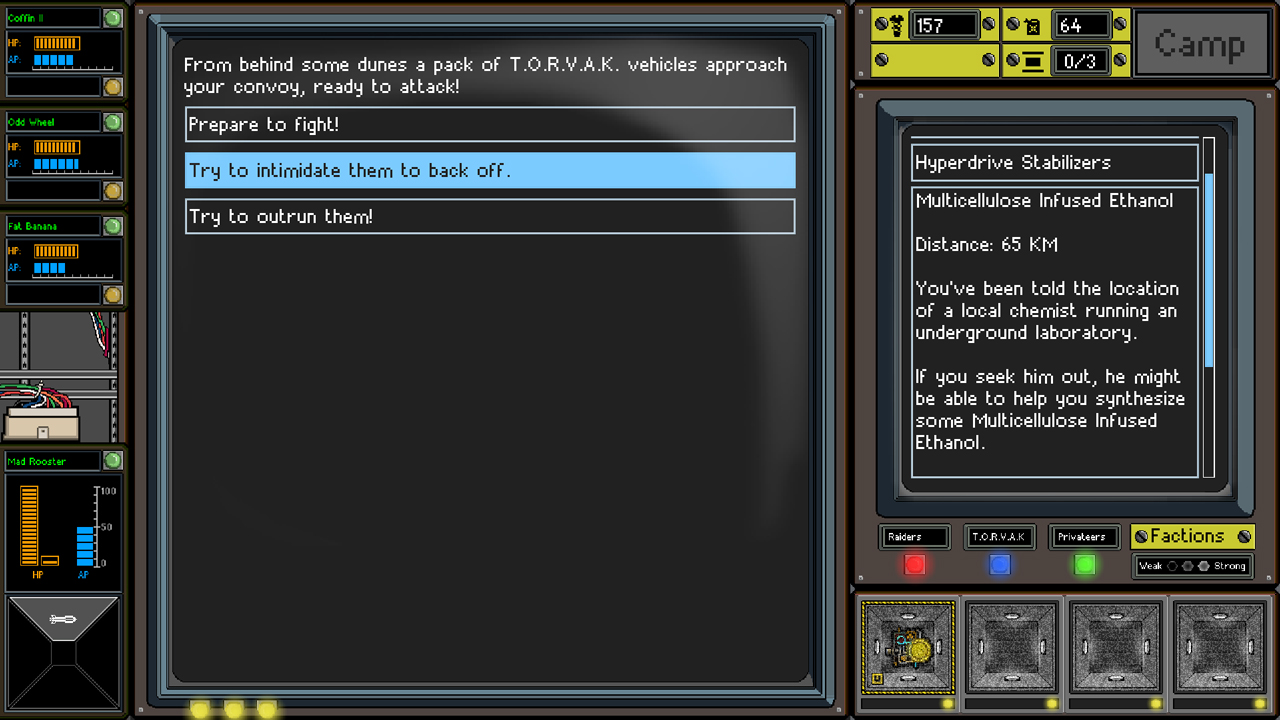 It’s a rather thin narrative but the unspoken aspect of survival adds a certain level of depth that is appreciated. Certain pre-battle dialogue bits will occasionally offer some extra knowledge as to why the other factions are on Omek Prime, as well. It’s difficult to make a wasteland look great, but Convoy does a solid job even with the retro art style. The style is certainly not anything new, but it still manages to mesh well with the theme of the game and places a check mark beside the “nostalgia factor” box.

The Switch E-Shop is absolutely full of retro inspired roguelikes, so standing out from the crowd is a necessity. Does Convoy pull it off? Not quite, in my opinion. The Mad Max inspiration is alluring, and the battle system is fun at its core (coming from someone who isn’t the biggest fan of the tactical RPG genre), but the inconsistent difficulty ultimately puts a damper on the fun. Touchscreen functionality and a better-balanced difficulty would’ve improved Convoy drastically, but there is still some fun to be had here. Convoy Games is a studio to keep an eye on in the future.