Picking up Citizens of Space for the first time, I came in with few – if any – expectations. I knew of its predecessor, Citizens of Earth, but had very little knowledge of anything else beyond this title’s sci-fi setting. I didn’t even know the game was an RPG. So when I took on the task of reviewing Citizens of Space, I had the rare opportunity to jump into a relatively fresh RPG franchise with almost zero exposure to its reputation. What would I find when I started my playthrough? Would I fall in love with the characters, combat, and lore? Or would I find the game lacking, unable to meet the high expectations its publisher and price point would suggest? 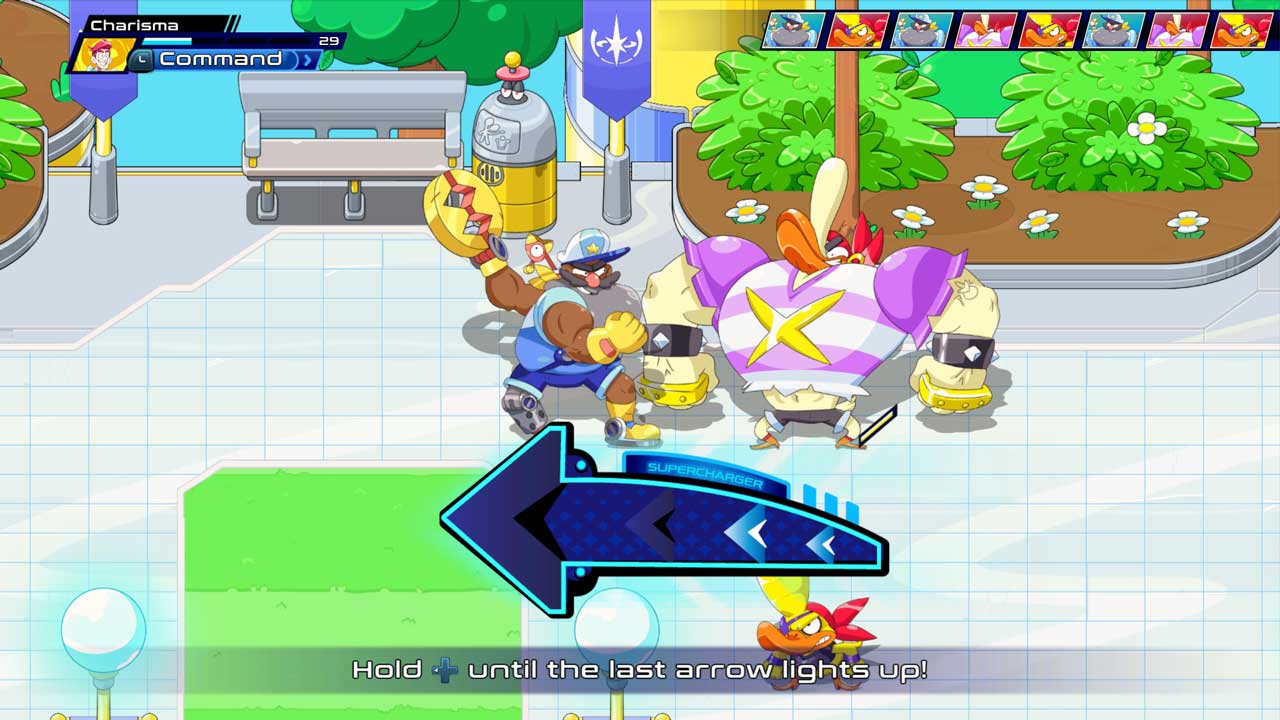 Visually speaking, Citizens of Space embraces a classic, cartoonish style that would be right at home in a zany, Saturday-morning children’s show. Colors are bright and vibrant, and character portraits and sprites are detailed and energetic. Every bit of the visual design is dripping with charm, communicating the comical nature of the game’s story right from the start. Various characters have exaggerated features and expressions, telling more with a single look than could be communicated through pages worth of dialogue.

That’s not to say that the dialogue falters at any point. Humor is the name of the game as far as presentation is concerned, and Citizens of Space accomplishes this goal brilliantly. As exaggerated as the character designs may be, each portrait is matched by an equally over-the-top voice over to further communicate the outlandish characters. Whether they be run-of-the-mill humans, traditional ‘grey’ aliens and robots, or bizarre denizens of far off planets, each character pops off the screen, coming to life in their own unique (and humorous) mannerisms. Voice-work and art design work together to really immerse the player in the games thoroughly ridiculous universe. Whether you are speaking to a group of gangster ducks, the horridly boring “Neutraliens,” or a confusing, 80’s-inspired, time-traveling police officer, you’ll never find yourself at a loss to find another quirky character around the next corner.

Aside of the excellent voice acting, the overall sound design of Citizens of Space is decidedly more safe. The various tunes on each planet, ship, and space station you visit all get the job done, communicating the general atmosphere and mood of the current setting, but not much else. I never found myself humming the battle or boss tunes in my off-hours, nor can I pick out a single track from the game in my mind as I write this review. None of the tracks are poorly done, but they lack the memorability often found in other RPGs. On the flip side, sound effects for battle and overworld actions can become a little tiresome after a time, particularly when navigating through the central hub world. The lead character can perform a dash action to speed things along, but each time he does, he makes one of two canned comments that easily get annoying the 100th time you’ve heard them in an hour. 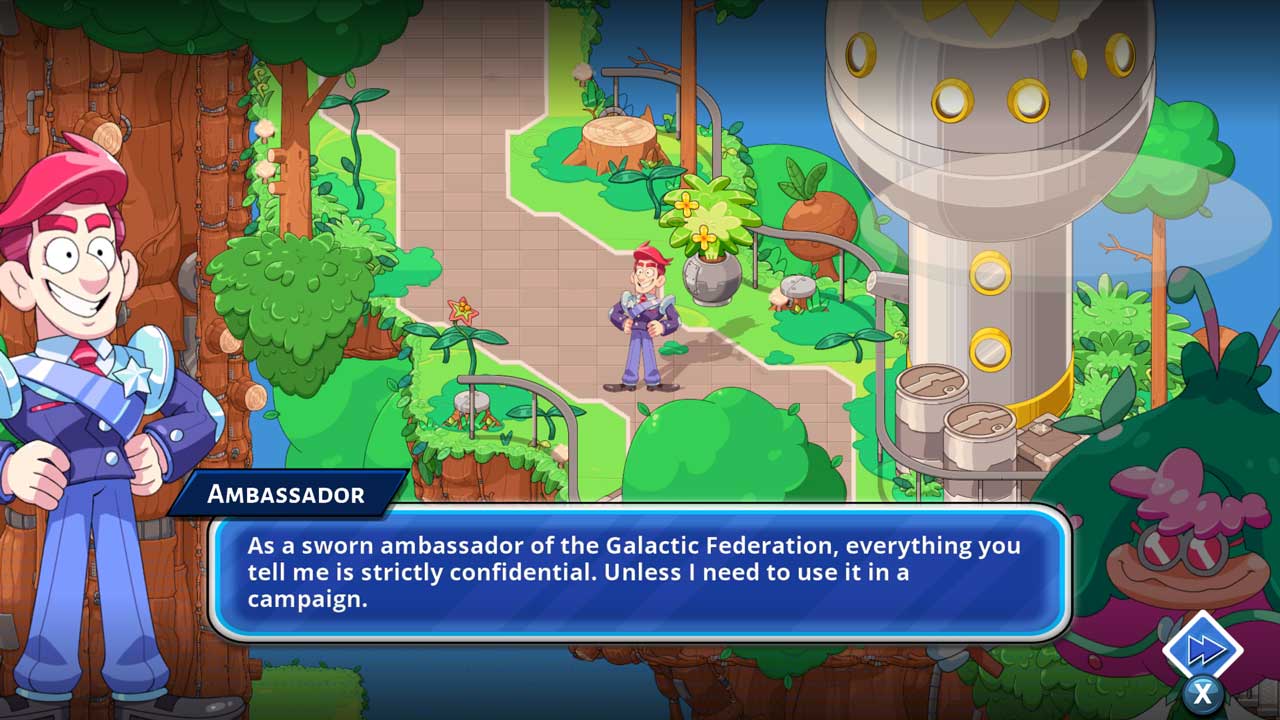 The story opens as the planet Earth sends its first representative (the ‘Ambassador’) to the Galactic Federation of Planets. Bright-eyed and overeager, the Ambassador swaggers his way onto the space station that serves as the Federation capital. There, he meets his beleaguered Assistant, a short, no-nonsense figure who serves as the Ambassador’s straight man throughout the adventure. Before too long, the pair discover that the planet Earth has gone missing, and they must wrangle up a gang of misfits to convince the Federation to care enough about their backwater planet to authorize an investigation. The Ambassador, who serves as the player avatar throughout the adventure, is every bit a politician. Comically unable to take any comment – no matter how insulting – in a negative light, he spends the majority of the adventure spinning insults thrown at him as compliments, inspiring humans, aliens, and robots with his tenacity, and overflowing with optimism, bravado, and not a small amount of political manipulation.

Serving alongside the Ambassador is an ever-growing group of companions, each more ridiculous than the last. These include the aforementioned Assistant, the most frequent character serving up insults to the wide-eyed Ambassador to spin, along with a stereotypical space pirate (complete with eye patch, peg leg, and mechanical parrot), a robot sheriff from a desert planet, an senile old astronomer, a slime-monster janitor, giant-brained galactic judge, and a whole host of other insane characters along the way. As previously stated, each of these characters come equipped with punny dialogue, over-the-top voice acting, and a reliance on extreme versions of classic tropes and cliches to get by. Almost every character is good for a chuckle or two, though you may find yourself growing weary of the unending stream of (sometimes good, sometimes bad) jokes that come your way.

That flat, comedic tone – one of the game’s greatest strengths – might also be one of the game’s biggest weaknesses. At no point in the story, even when first discovering that the Earth had disappeared, did I ever feel a sense of drama or tension. I could never take the story seriously, so I never got the sense that anything was really at stake. Even with billions of people up and vanishing in the blink of an eye, the player is left with the same sense of indifference as the aliens who make up the Galactic Federation. Do we care enough to go on this journey? Or do we simply let the Ambassador go on his little adventure to keep him out of our hair? The lack of dramatic tension hurts the pacing and enjoyment of the game, as nothing ever feels at risk. You find yourself pressing on with the story not because you have an innate drive to solve the mystery, but simply because this is what you signed up for. 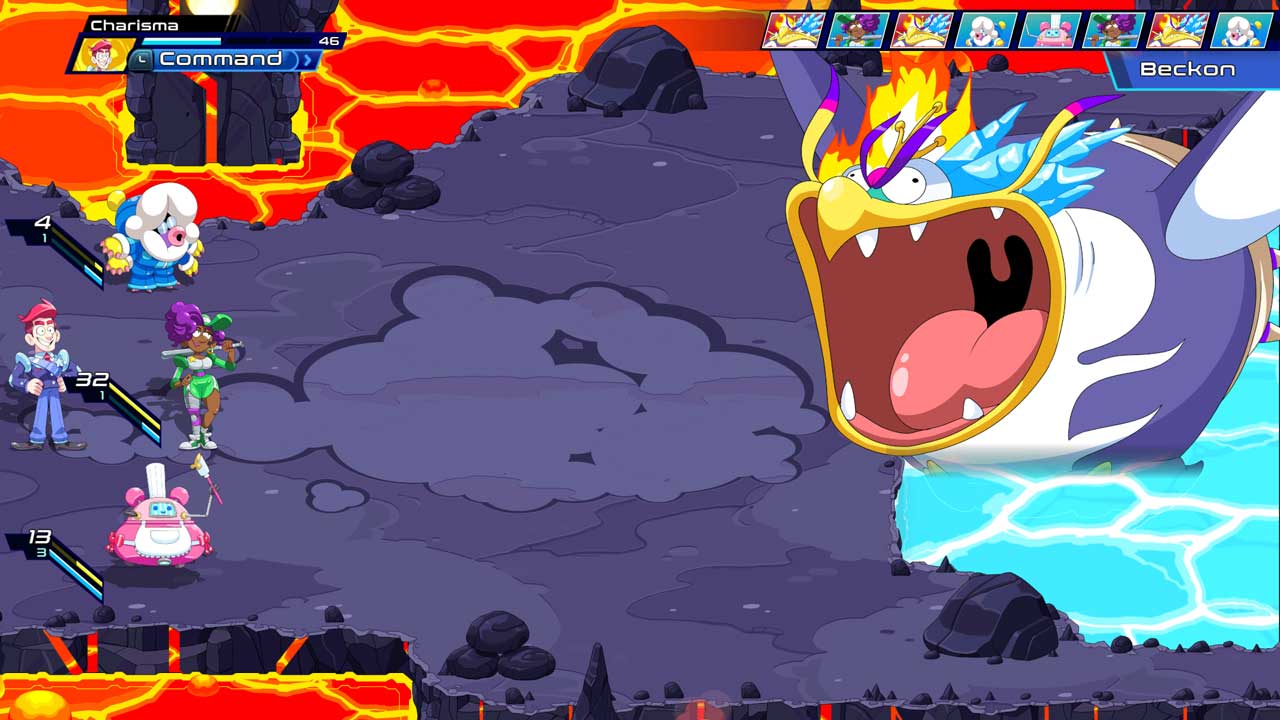 One saving grace in the face of this dramatic dilemma is the game’s combat system. Citizens of Space takes what Super Mario RPG started – timed button presses to boost the power of attacks – and cranks the system up to eleven. Each attack a character an perform in Citizens of Space comes with its own mini game. Some are as simple as watching a dial fill and hitting ‘A’ at the right moment, but the minigames only get more complicated from there. Early minigames may have you pressing buttons in a specific sequence, mashing two buttons back and forth to fill a charge meter, or waiting for an icon to appear over a specific enemy, telling you which button to press as quickly as possible. These attack minigames only diversify further as the game goes on and you acquire new characters and abilities. Just as you think you’ve figured out a batch of attacks, a new character joins the mix whose minigames are structured completely differently.

On the flip side, the combat employs a more simple resource management system to keep things fresh from moment to moment. Each character has an individual MP pool, ranging from 2-4 MP each. Abilities in the character’s arsenal may either increase or decrease their MP, forcing players to go back and forth between different abilities, rather than simply spamming their strongest attacks. At the same time, each enemy comes with a set of elemental strengths and weaknesses, which do more than just affect the damage they take in battle. Hitting an enemy with an attack of their elemental weakness will not only do more damage, but will also boost your MP count, giving you the chance to strike with harder attacks more often. Meanwhile, hitting their elemental strength will cause you to lose MP, giving you a smaller pool of attacks to choose from.

In the background (literally) of this central combat system is the Ambassador. Not one to get his hands dirty, the Ambassador stands behind his companions, who do all the work for him. However, each attack causes a charge meter for the Ambassador to fill, which allow him to interrupt the regular flow of battle to use items, change the rules of engagement, or even summon special companions to the battlefield for massive damage. This nice bit of gameplay and story integration provide a clever means of executing common RPG tropes without making them feel stale or out of place. 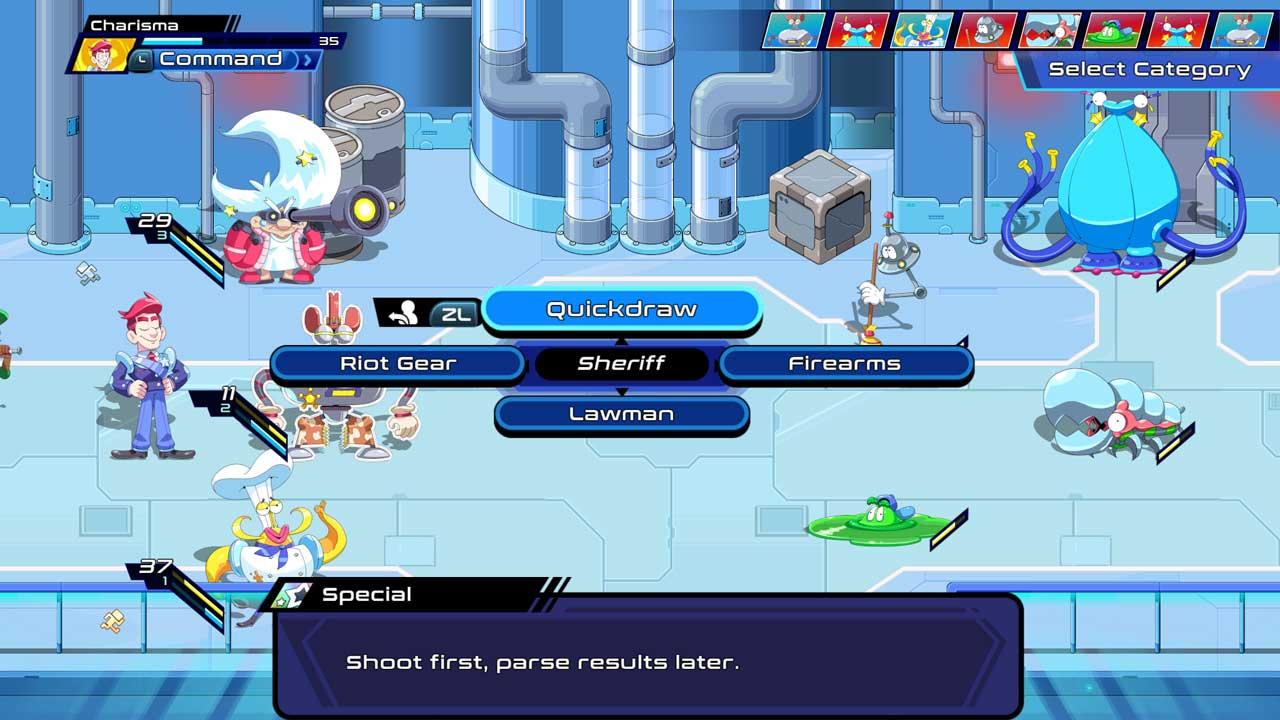 The Ambassador’s companions are good for more than just combat. Companions are broken into three groups: combat, summon, and support. Combat and summon companions are just what they say on the tin – they will fight the Ambassador’s battles for him, each coming with their own subset of attack minigames. Support companions, meanwhile, serve a dual role. First, they can be equipped to / paired with combat companions, offering specific stat boosts that match their personality. Some may increase your speed, but lower your attack. Others will boost your attack power while lowering your magic power. Players are encouraged to find good combinations of combat and support companions, focusing on strengths or covering weaknesses.

Additionally, each support character also comes with an out-of-combat ability that changes the way the player experiences the game. Again, this system offers a nice bit of gameplay and story integration, giving you a logical means of acquiring quality of life features. The Assistant, for example, allows you to change the random encounter rate to varying degrees, based on how much you’ve leveled him up. Other support companions may increase or decrease the difficulty of minigames, with a corresponding adjustment to their risk/reward ratio, or they may unlock an artbook, allow you to change the current music track, or unlock a laboratory where you can battle custom-made parties of enemies and test your skills.

Collecting each of these 40-something companions provides a lot of meat to the bones of the main story. Walking into the hub zone, less than 15 minutes into my playthrough, I found a host of recruitment sidequests available to collect right out the gate. This created a massive pacing problem early in the game, as it took me over an hour just to walk to the Ambassador to his first meeting at Federation Headquarters. I spent most of that time walking from shop to shop, talking to NPCs and seeing whose recruitment quests I could start and who I would have to save for later. This problem did not persist too deeply into the game, thankfully, as most NPCs encountered later should be seen relatively close to the time in the story when you can complete whatever objectives they may have for you.

All these features wrap together to create a mechanically engaging and entertaining RPG. Where Citizens of Space falters the most, I felt, was in creating a sense of dramatic tension. I never felt the NEED to keep playing, particularly once I had collected a good number of companions, as I had a big enough pool of skills and familiarity with the minigames to have the core combat systems “solved.” Without a strong story pressing me on, the game slowly became less engaging over time. That isn’t to the say the dialogue, characters, art direction, and other core gameplay elements didn’t stay snappy and well-designed – certainly not. It is only to say in this one important area of RPGs – the central narrative – Citizens of Space simply falls short. If you are looking for an RPG with an excellent twist on combat and a good bit of humor however, then you can’t go wrong with this title.

I enjoyed Citizens Of Earth on Wii U. Had an Earthbound vibe to it. May look into this one!