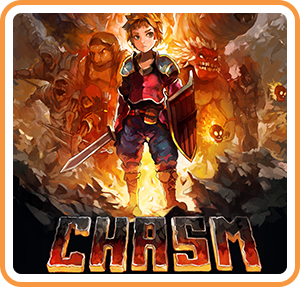 The Metroidvania subgenre is something that has grown explosively over the past decade alone. Their iconic tight controls, satisfying combat, widely varying mechanics, and boatload of bite-sized “rooms” that concatenate into a vast, explorable map is enough to make just about any gamer excited for the next great thing to release under the Metroidvania banner.

As with any densely packed market, things that don’t bring something new or interesting to the table can easily go unnoticed completely. From the very beginning of its Kickstarter roots, CHASM was billed as featuring procedurally generated dungeons and a meaningful RPG foundation similar to the RPG-focused Castlevania games, both points serving as fuel surrounding the hype of its release.

In theory, an “infinitely replayable” Symphony of the Night-esque game sounds incredible, but is it enough to win CHASM premium status in an already heavily competitive subgenre?

CHASM follows a promising recruit whose first assignment calls for the investigation of a mining village that has went silent as of late. The resources that the town provides are essential, so it is crucial to uncover the reasoning behind the matter. Seeking a way to prove yourself, you grab a sword from the armory before setting off towards the remote village.

Upon reaching your destination, you discover it is pretty much a ghost town, save for the mayor, whom explains that the miners, in their desperation to find new sources of ore, uncovered creatures that should have been left alone. As a result, the town was ransacked and many people are missing. The mayor begs you for help before quickly handing over the key to the mines.

As you delve deeper into the earth, you’ll come across all sorts of strange and bizarre things. While you’re bound to find some townsfolk scattered about in the process, you will also come to learn about an ancient civilization that took a few pages from Indiana Jones with its demonic rituals and temples of doom.

Unfortunately, it sounds much more exciting than it actually is in execution. While almost anyone can appreciate such a plot, it just isn’t that memorable of an experience. The archaeologist that you befriend and is the source to much of the lore is probably the most interesting part, but nonetheless is portrayed in a fashion that feels like a boring high school history lesson rather than something of real substance. The overall presentation of the story, while certainly acceptable, is a bit of a letdown due to it not making any real waves in its delivery.

Fortunately, CHASM manages to easily excite on the gameplay side of things. There is a strong sense of familiarity that comes from within its base gameplay loop if you’ve played any of the RPG Castlevania titles. You will be platforming across two-dimensional maps while battling it out with a wide variety of antagonistic creatures. All of these entities have their own sort of gimmick that is best memorized in order to minimize your downtime. Many paths will be blocked to you until the right artifact is found, with artifacts serving as passive items that grant you standard Metroidvania quality of life improvements like double jumping, sliding, wall jumping, and more.

CHASM really sets itself apart from the standard Metroidvania by its more in-depth RPG mechanics. Alongside your usual level-up system lies a fully-fledged equipment mechanic that encourages you to experiment with different kinds of loadouts. Fist weapons, daggers, one and two handed swords, clubs, whips, polearms, and rods all have their own associated pros and cons. You will often have to weigh whether that bonus damage from the shiny new two hander is better suited than the weak, but faster, dagger. Classic Castlevania-infused sub-weapons, like the throwing daggers and axes, serve as the magic counterpart to your melee capabilities. All of these things can be tweaked on-the-fly from the menu, and you aren’t punished for taking full advantage of it.

Overall, the combat isn’t as flashy or action-packed as other Metroidvanias, but that isn’t necessarily a bad thing either. CHASM mirrors the combat of the older Castlevania RPGs exceptionally well, so the lack of bar raising in terms of innovation becomes a non-issue if you enjoy those kind of games already.

CHASM utilizes a fairly basic, but adequate crafting system. The villagers you rescue from the depths below town will offer their services in exchange for the help and, often, items or money. Various consumables, weapons, armor, and even your sub-weapons can be upgraded and enhanced through these systems, so be sure to use them to their fullest extent. But be prepared to feel one step behind constantly, as the game will demand increasing levels of components for these services while not really making up for the demand with a decent supply avenue.

This won’t be an issue for everyone though, and will primarily stem from your comfort level with the game itself and the chosen difficulty of your playthrough. And speaking of challenge, there are three initial levels of difficulty to choose from, with more becoming available to you after completing the game on the hardest base difficulty.

Ultimately, from a gameplay perspective, CHASM is not really going to do anything you haven’t seen before, but the level of RPG mechanics present that simply aren’t in your everyday Metroidvania make up for that pretty well.

Hate them or love them, the procedural generation system is one of the front-running features of CHASM. When done right, such a feature can spark added incentive to play the same game for hours on end. When done poorly, the whole idea can just seem like an afterthought. The system in CHASM sits exactly in the middle of the two, neither adding value or becoming detrimental to the overall experience.

The procedural generation is done on a room-by-room basis. In other words, an entire pre-generated cell might swap places with another one, but not on a tile-by-tile level. And the procedural generation does not apply to main points of interest, which are more or less in the same locations every time you play. While the system, as it stands, does somewhat change up the journey each playthrough, it ends up feeling unnecessary rather than beneficial to the package as a whole. You will likely not find yourself compelled to repeat playthroughs for the sake of the random generation alone because it just doesn’t shake that much up, not to mention you will already be more than familiar with the room layouts from a single run alone, let alone multiple ones. The fact that CHASM put a lot in its procedural generation from a marketing standpoint leaves somewhat of a bad taste in the mouth. In retrospect, a more static, hand-crafted approach to the map design would have been a much better fit.

CHASM offers a jaw-dropping experience to pixel art enthusiasts with its lush, numerous locales and gorgeously animated sprites. The opening sequence of the game alone is stunning in its presentation as you witness an amber-glazed sunrise from atop a watchtower. The trend of beauty continues as you make your way to the small, quiet village and persists as you venture from the preliminary levels of a dank mine through macabre catacombs, vibrant gardens, ruined temples, and more.

That same feeling does not extend to the music, however, as it is fairly dull in comparison. Similarly crafted Metroidvanias, such as Symphony of the Night, have a way of charming you into playing more than you normally would with its engrossing soundtrack, whereas CHASM just leaves you wishing for something better suited to complement its beautifully rendered aesthetic. Plenty of indie games offer fantastic soundtracks, so it is not an issue of the size of a team. That said, the music in CHASM is not bad but it does feel a bit out of place.

CHASM is the perfect Metroidvania for those that desire a heavier emphasis on RPG systems at the expense of less flair on the action side of things. If you like the more RPG-centric Castlevania games from the PS1 and DS eras, there’s a lot to love here. Lore nuts and audiophiles may not have a lot to get excited about, and it isn’t as infinitely replayable as the procedural generation system would have you believe, but CHASM still proves to be a solid experience.