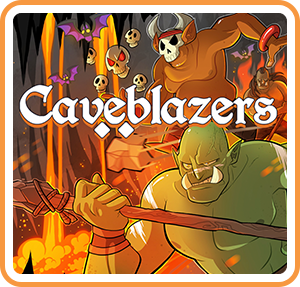 Caveblazers sells itself as being an “action focused platformer roguelike”, but I would like to correct this as it’s completely wrong. Caveblazers is actually a “tough, pixel death inducing meat grinder of hell”. By now we all know that death is a required part of roguelikes. Woe is the life of all roguelike fans where we subject ourselves to repeated runs where we succeed just long enough to obtain that sweet loot, just to die in the next second from something totally stupid. Is the meat grinder known as Caveblazers enjoyable enough to keep playing, or will it just make you walk away angry, thinking how great it might have been? Put on your hat of choice and let’s take a stroll through the depths of Caveblazers. 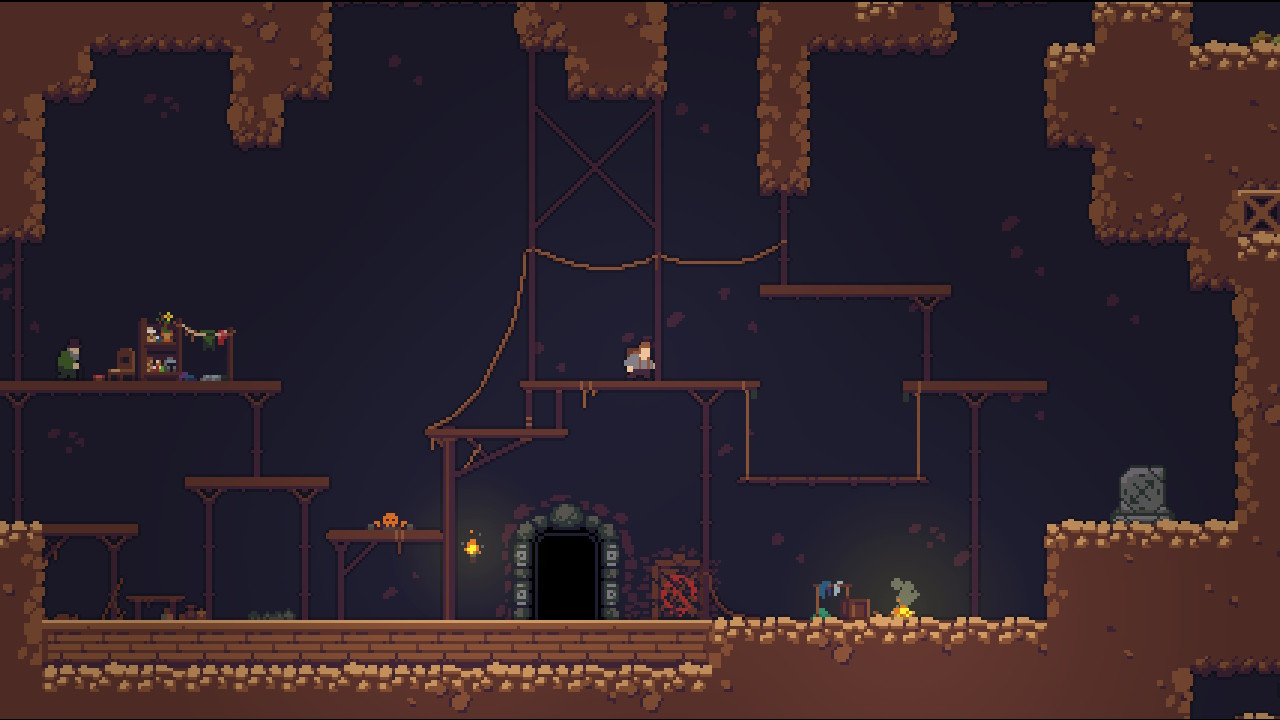 In the never-ending quest for riches and power, you find yourself at the cave entrance, greeted by an angry old man that says nothing but rude things. You can ignore him if you would like but that old hag is right about one thing: you will fail and die. It’s the quest for riches and power that drives us though, but Caveblazers is no dummy. Deadpan Games came prepared with a #@$&-ton of weapons, magic items, enemies, buffs, debuffs, and bouncy spikes. Just wait, you’ll see. 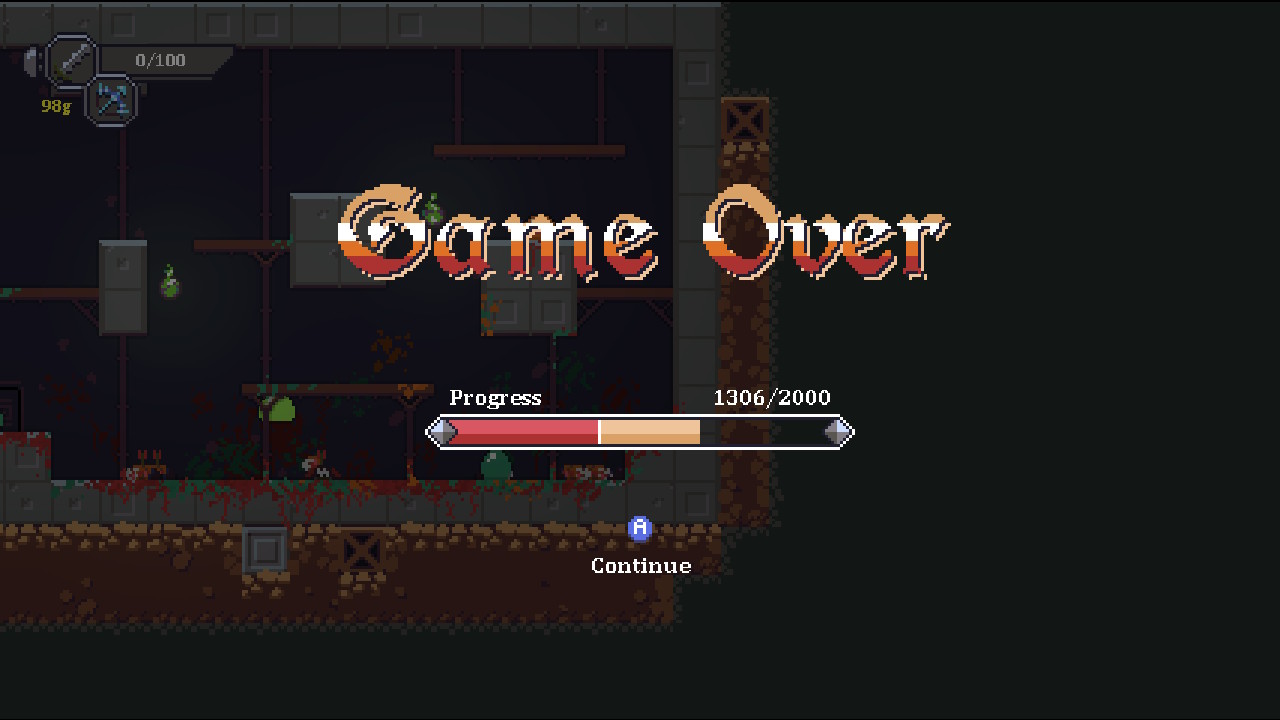 Caveblazers doesn’t give you everything right up front. You have to earn it, so you better get good. By playing through Caveblazer’s procedurally generated levels and kicking in faces you will earn progress points after each run, aka your death. After you earn enough progress points you level up, which rewards perks or fashion items that you can then use in your next run. Rinse and repeat – welcome to Caveblazers! 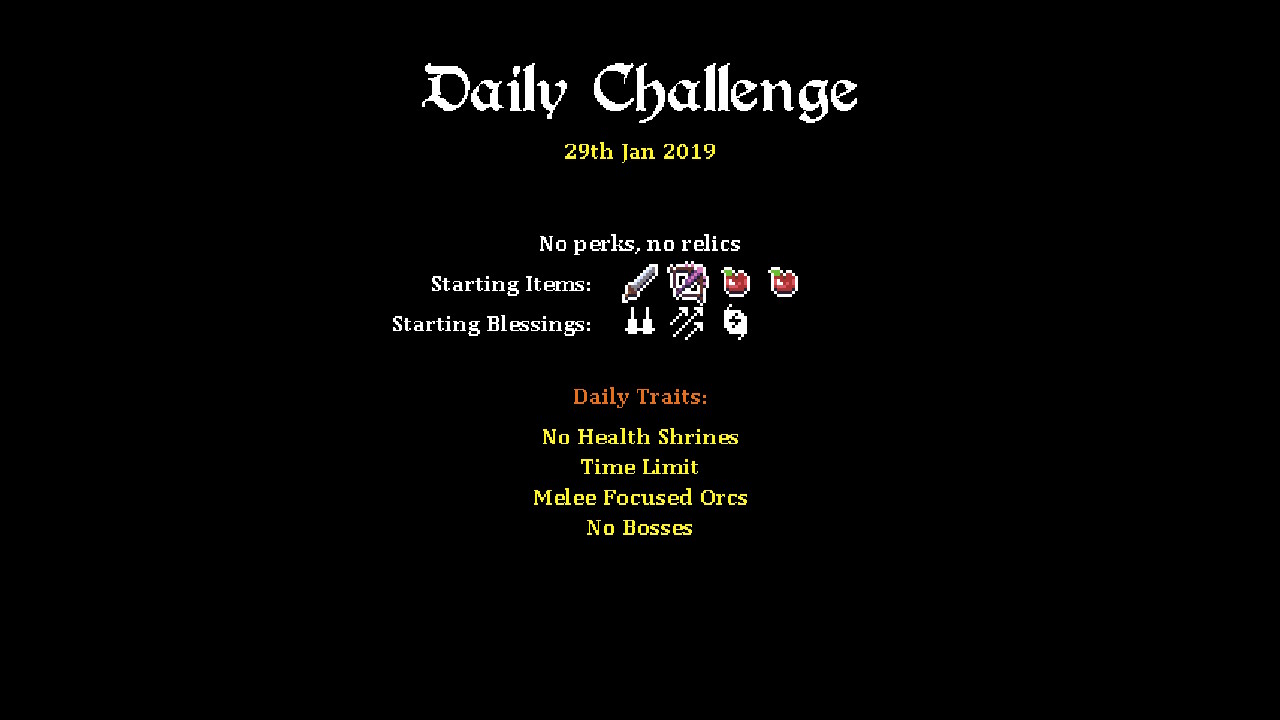 Caveblazers is my new best friend that doesn’t want to do the same thing over and over. In Caveblazers, you have the choice of running through the normal, arena, and daily run types – at least this is what I’m calling them as they didn’t feel like labeling them properly. Daily runs are only available once a day for a single run but they come loaded with special circumstances called daily traits. Starting items, blessings, and traits will be different each day, making for a highly unique run that you won’t find elsewhere in Caveblazers. 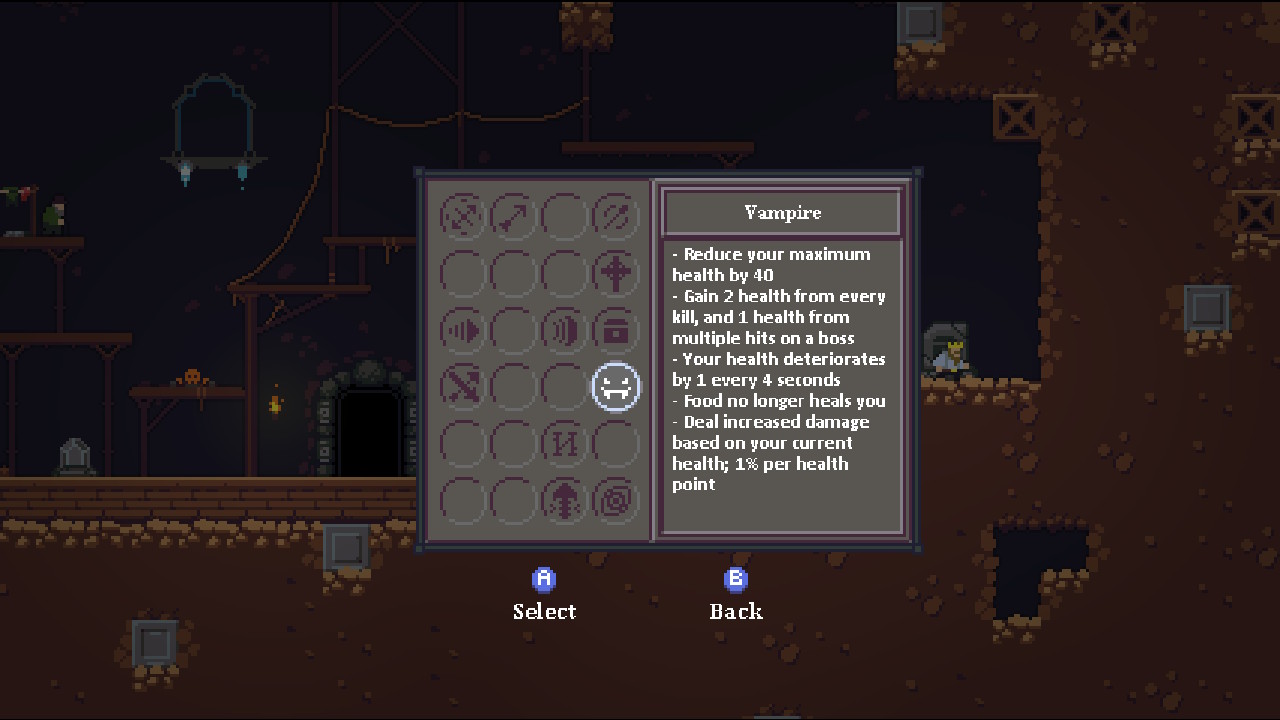 Caveblazers is filled to the tippy-top with equipable items, blessings, and perks. It’s one of the things that makes Caveblazers stand out from the pack. Before you start each run you can choose a perk for that run. These perks can really mix things up by giving you a wild assortment of advantages and/or disadvantages. My favorite so far has been the Sorcerer perk which increases magic damage by 10, makes magic items charge faster, and reduces melee damage by 2. Additional perks can be unlocked by leveling up, of course. 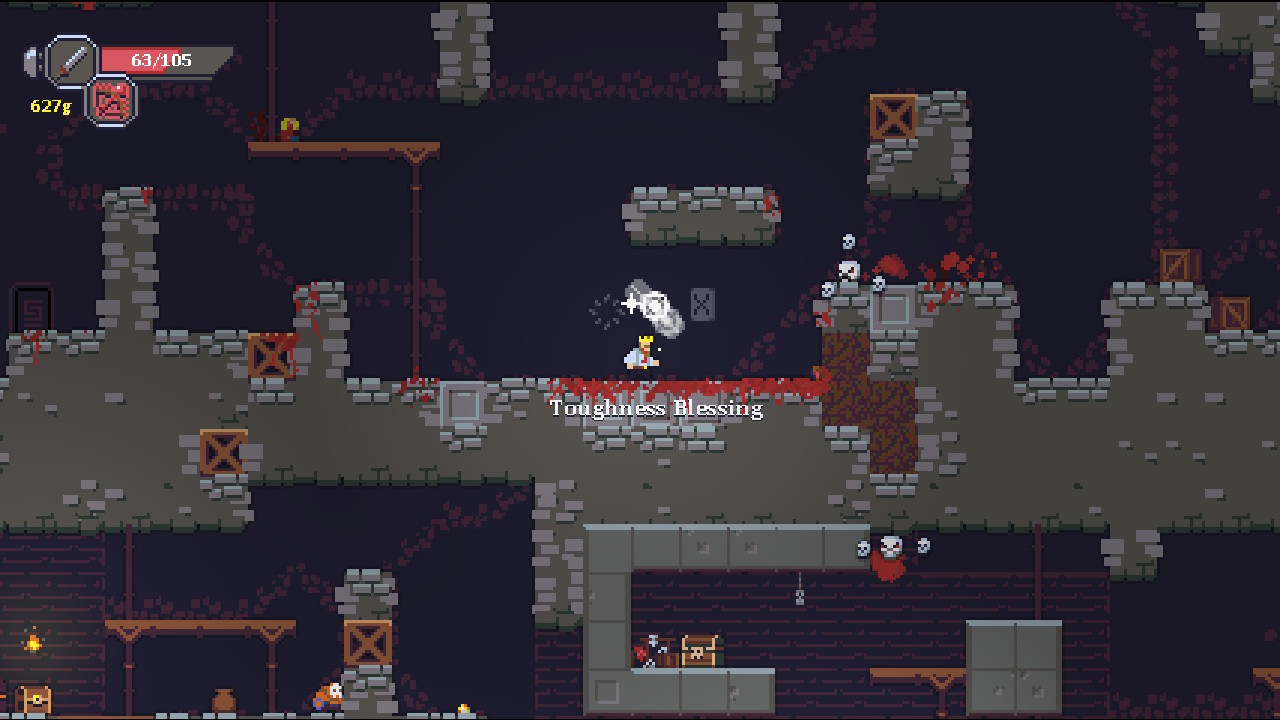 Blessings are run-specific and only stay around for the duration of that run’s life. Blessings can be acquired a variety of ways depending on the type of run you are attempting. In normal mode, you will find them randomly scattered throughout the procedurally generated levels. Sometimes, you will only find a single blessing all by itself while other cases you will find a blessing altar, which gives you the choice between 3 different blessings. You only get to pick one blessing as the others disappear after your choice, so choose wisely. 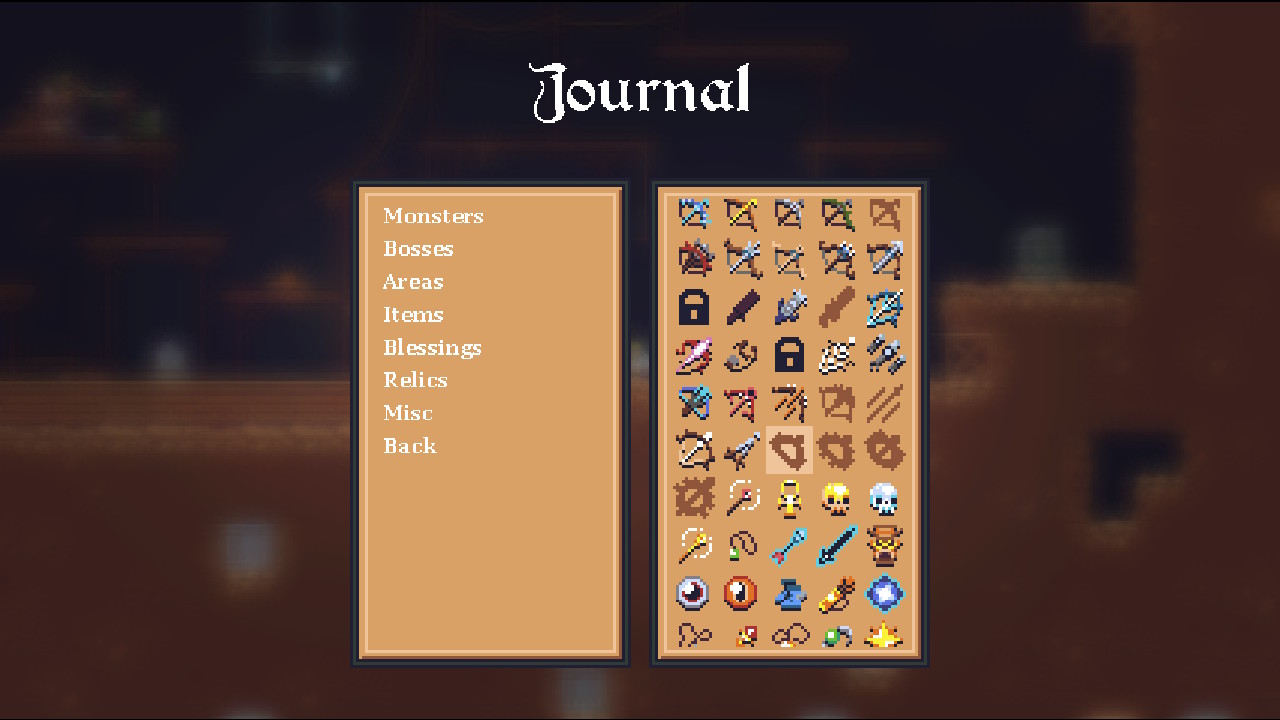 Items in Caveblazers can be categorized into 4 types. You’ll find or start with a wide variety of melee, ranged, magic, and ring type items. You will find these items in chests, wooden boxes, and from the corpses of your enemies throughout a normal run level. It’s a little different in arena mode where you only get to pick new weapons after the completion of each wave. Melee and ranged weapons have a variety of effects such as an increased percentage to set things on fire or the wackier projectiles that stick into your targets, then explode in a glorious fashion. 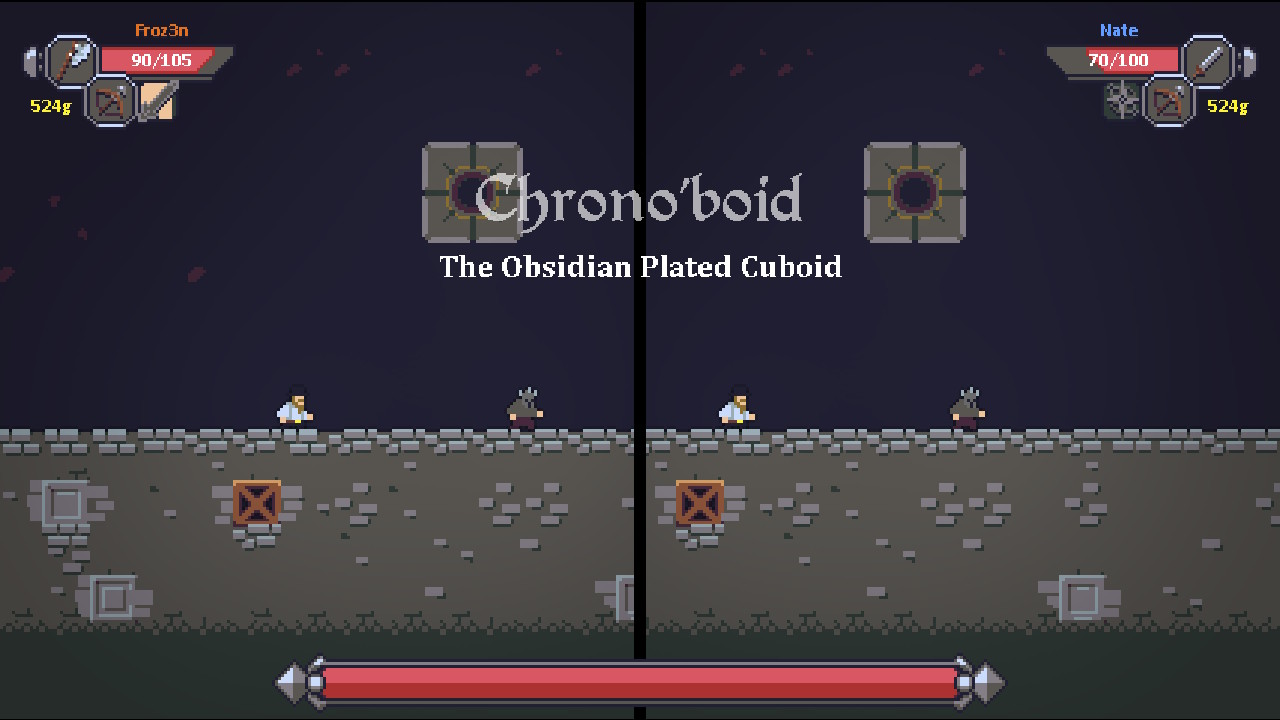 Caveblazers comes equipped with co-op play for you and one other murderous friend. Take to the caves with your bestie and see if you can make it any deeper than your solo runs. I doubt it, but it’s likely more fun depending on who you’re bringing along. While spelunking you will also notice other friendly NPCs which may join in and assist with your slaughtering of the naughty cave monsters. They behave like any other friendly person – they will steal dropped items, they will blindly run into danger, and yes, they will eventually die so you can get your items back. Overall it’s not a bad idea and they usually do more good than evil – just keep a tight grip on that new sword of yours. 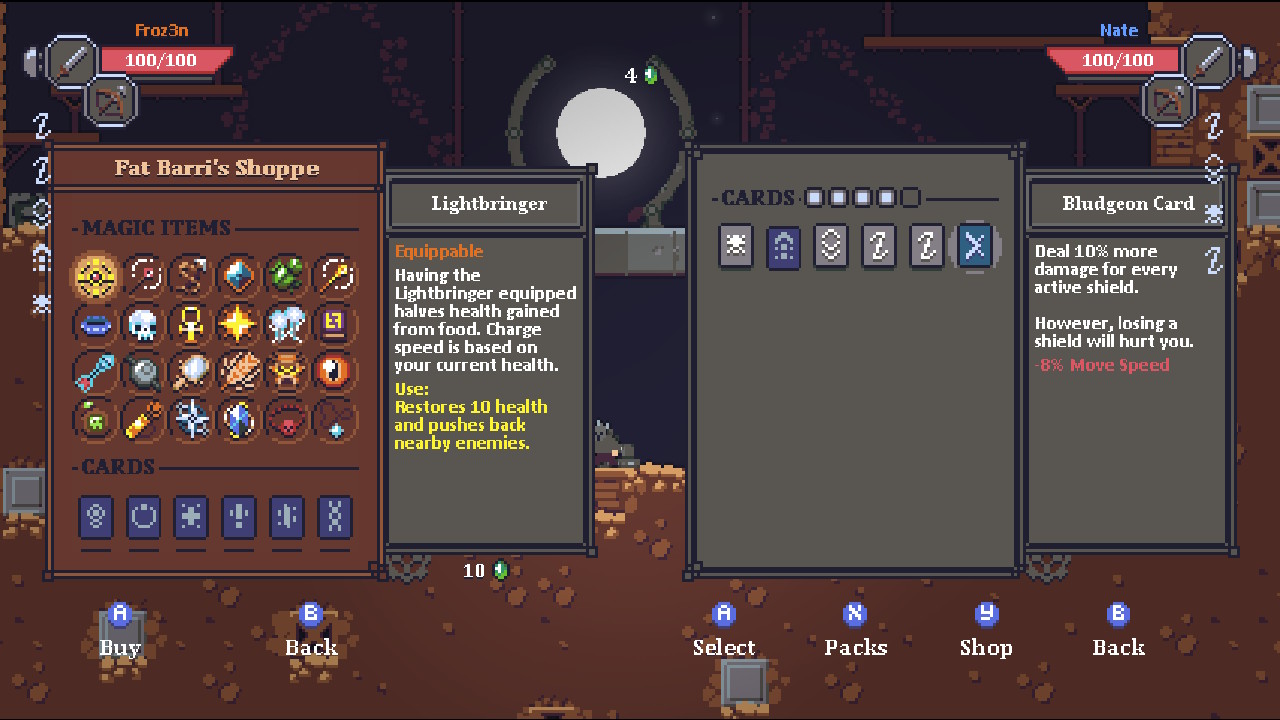 I wouldn’t be doing this review justice if I didn’t take a moment to talk specifically about arena mode. In arena mode, you and your coop mate (if you have one) take on waves of enemies in smaller arena-style levels. The enemy spawns in arena mode are random, so you never know what you will be up against right from the start. The coolest feature of Caveblazers is specific to arena mode. This mode comes with card decks and Fat Barri’s Shoppe. Before you attempt your arena run take a minute to customize your card deck.

The cards can give you lots of permanent bonuses such as damage increases, and multiple arrows. In Fat Barri’s Shoppe, you can use the currency you’ve earned in previous arena mode runs to buy magic items or cards which you can use to start your next run with. The next run is always the best run right?! The addition of cards and making you choose your starting magic item makes Caveblazers arena mode unique. There’s also a custom game mode that was built for fun and whacky runs, but you can’t earn progress points there.

Caveblazers is a complete roguelike package. No two runs are quite the same, and adding in Caveblazer’s difficulty will only extend your quest towards unlocking perks, hats, and setting up the perfect deck for those arena mode runs. I did find minor annoyances with the size of everything though. After just about 10 hours with Caveblazers, I still find myself getting hit from the direction I’m not facing. With all the enemies and friendlies on the map at once and such a small character model it sometimes is not quite obvious which direction your melee attacks are hitting.

The graphics are nothing impressive. In fact, they might actually suck but the gameplay is on point. There are also a few cheap enemies, like the blue Jumper, but what would a badass Caveblazer such as yourself do if everything was handed to you on a silver platter? Time to get good. I like this game, and if you like roguelikes you will probably like this game as well. It’s a solid and high SwitchRPG GOOD for me. Grab a friend and get to blazing through those Caves!