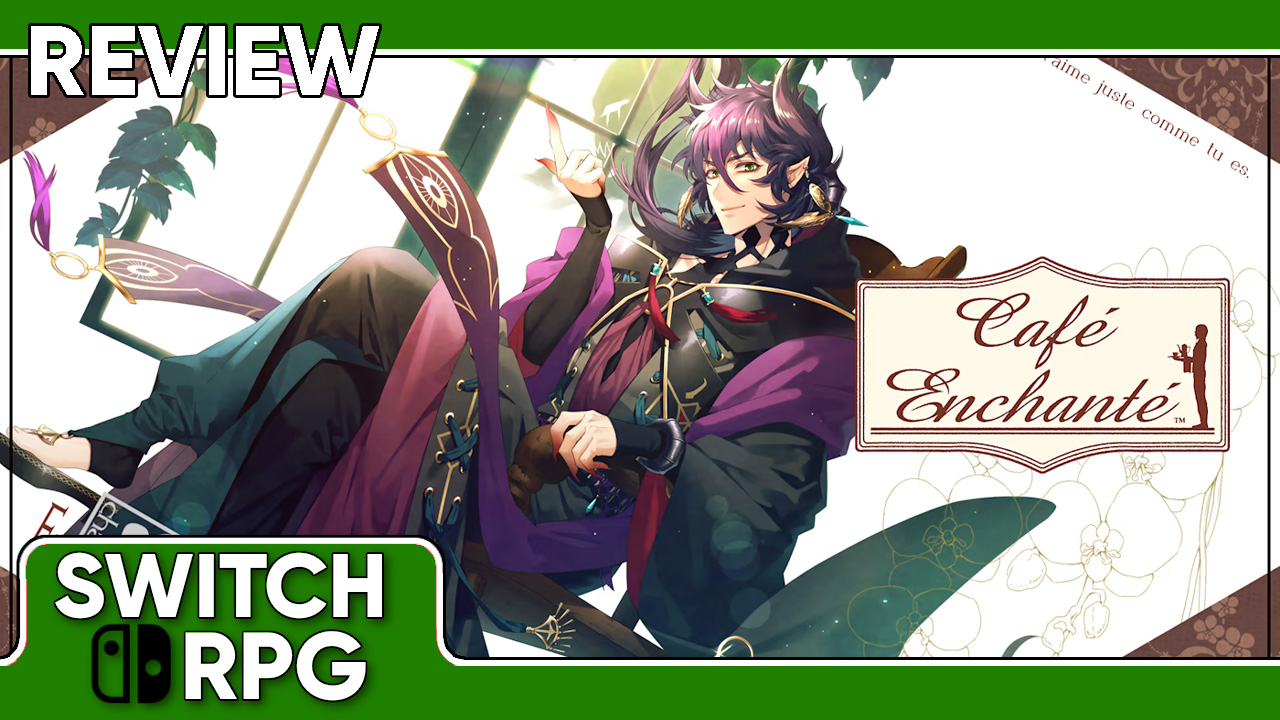 Have you ever dreamed about owning a cafe where you can serve a variety of customers? How about romancing one of your regulars? But not just human customers – oh no, fantasy cafe customers. Fire beasts, angels, demons, and much more await you in Cafe Enchante.

You play as Kotone Awaki, a young woman who has just inherited her grandpa’s cafe. Having just quit her last job, she’s hoping that this is a new step in her otherwise uneventful life. However, she quickly finds that the shop her grandpa left her actually contains a door that connects to multiple other worlds, where fantasy creatures known as non-humans live. And even stranger, several of these non-humans are regulars at Cafe Enchante. 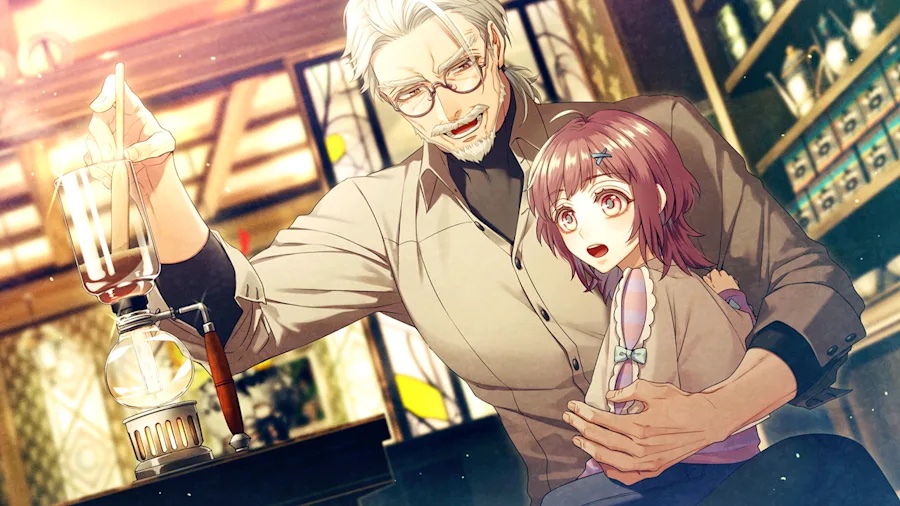 The general tone of Cafe Enchante at first makes you think that it will be lighthearted, almost akin to a slice-of-life anime. However, don’t let the pretty visuals and lack of conflict early on trick you. Cafe Enchante can get quite heavy, especially once you go deeper into the individual routes. I would even go as far to say that as you progress down the line of guys, things get darker and darker. 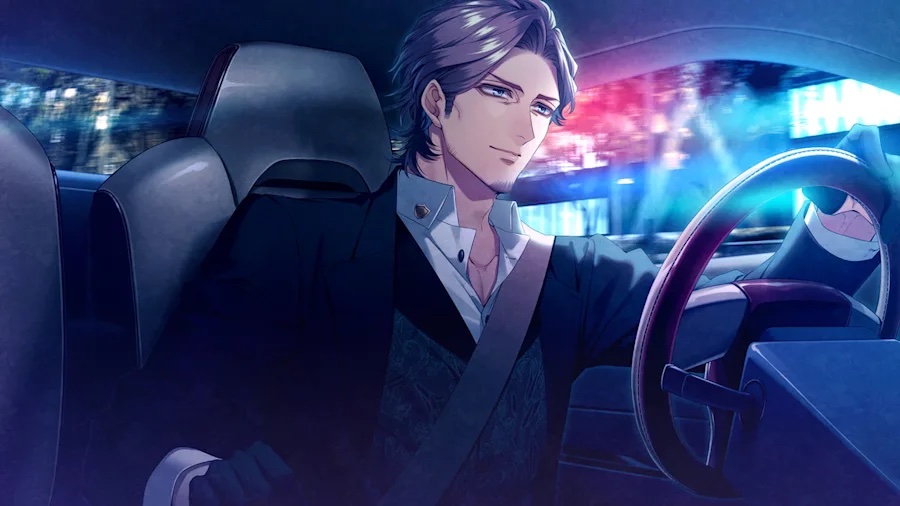 The storytelling does tend to fluctuate in quality however, with some routes (Il and Canus) feeling more well rounded than others (Ignis and Misyr). Along with that, how the common route is handled is also particularly messy. The common route, which means the portion of the story you play before you are locked into a particular route, is obnoxiously long. That becomes a problem because right from the start, any choices that you make have an effect on which route you end up on. This makes replaying through subsequent routes a bit of a pain, because you will have to skip through the entire first part of the game every single time rather than starting off at a save point part way through. And the common route does not change outside of minute changes.

Cafe Enchante is an otome visual novel, where you can make choices to potentially romance one of the five male characters available. Each of the choices will have an effect on how the story ends up, from which character’s route you end up on to whether you end up getting a good, normal, or bad ending. There is no flowchart available, so you will need to save often if you wish to 100% the game. As mentioned earlier, due how the common route is handled, there isn’t a good way to save your game at the point where the routes branch off, since every choice from the start affects which route you end up on. 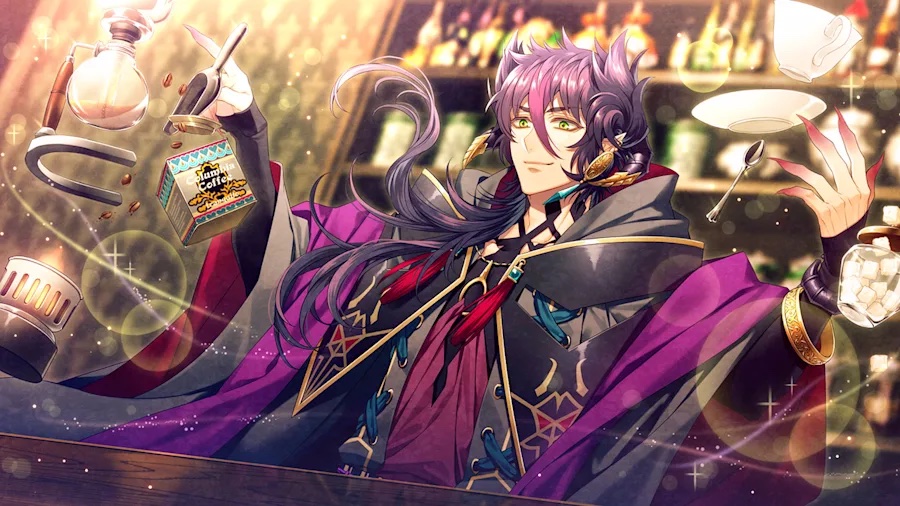 There are five different guys that you can romance: Canus Espada, Ignis Carbunculus, Kaoru Rindo, Il Fado de Rie, and Misyr Rex. By default however, only the first four have their routes unlocked, with Misyr’s route unlocking after you’ve played through the others. As with other otome games, there is a general “recommended” route list, and for Cafe Enchante, how the guys are listed above is the agreed upon order. But of course, you can go down the routes in any order that you wish.

The art of Cafe Enchante is done by Yuuya, who has credits for other otome games such as Cupid Parasite and Pub Encounter. And given the fact that this is a visual novel Otomate, it comes to no surprise that the visuals are gorgeous. The use of color is spectacular, especially given the fact that most of the cast are supernatural creatures, it’s good that they didn’t skimp on making each CG feel as magical as possible. 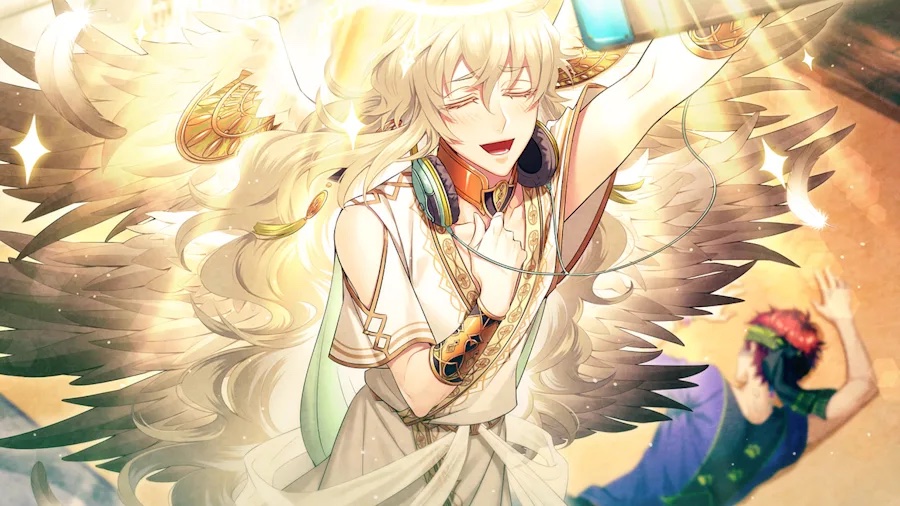 The music is okay, although it is very reminiscent of coffee shop music (which does fit, given that Cafe Enchante takes place in a cafe). However, this does mean that a lot of the music can easily go into the background and end up being forgettable. There are a lot of piano pieces, but for the heavier moments, Cafe Enchante does pull out the orchestra pieces to set the mood.

At first glance, Cafe Enchante seems as though it would be a cute, slice-of-life visual novel. And while that is the case with some moments, there is a lot more angst than expected, especially in later routes (if you’re going by the “recommended” route order of Canus, Ignis, Kaoru, Il, and Misyr). They’re all interesting to read through in of itself due to the themes portrayed, but it’s easy to see which routes are better written than others.

While Cafe Enchante is definitely one of the weaker otome games available on the Switch, it is still a nice experience overall. As one of, if not the only otome visual novel dealing with supernatural creatures, there is plenty of action for readers to take in, as well as a good mix of romance and flirting.