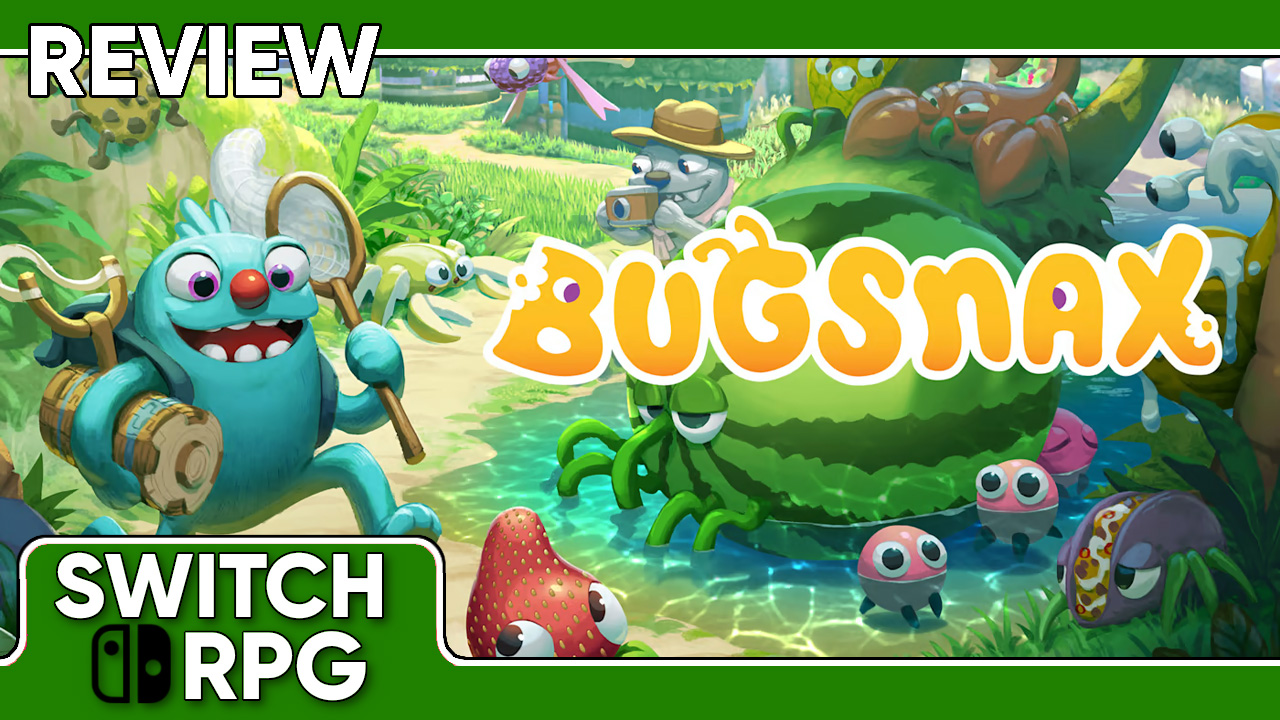 When Bugsnax was first announced as a PS5 exclusive, I didn’t know much about it besides having to catch creatures of the same name. Sounds a bit familiar, doesn’t it? So, when it was announced that it was coming to Switch, I was interested to see if this was another type of Pokemon game with a puzzle-type mechanism for catching which would replace the more iconic battling method. What I actually experienced, however, was something entirely different. 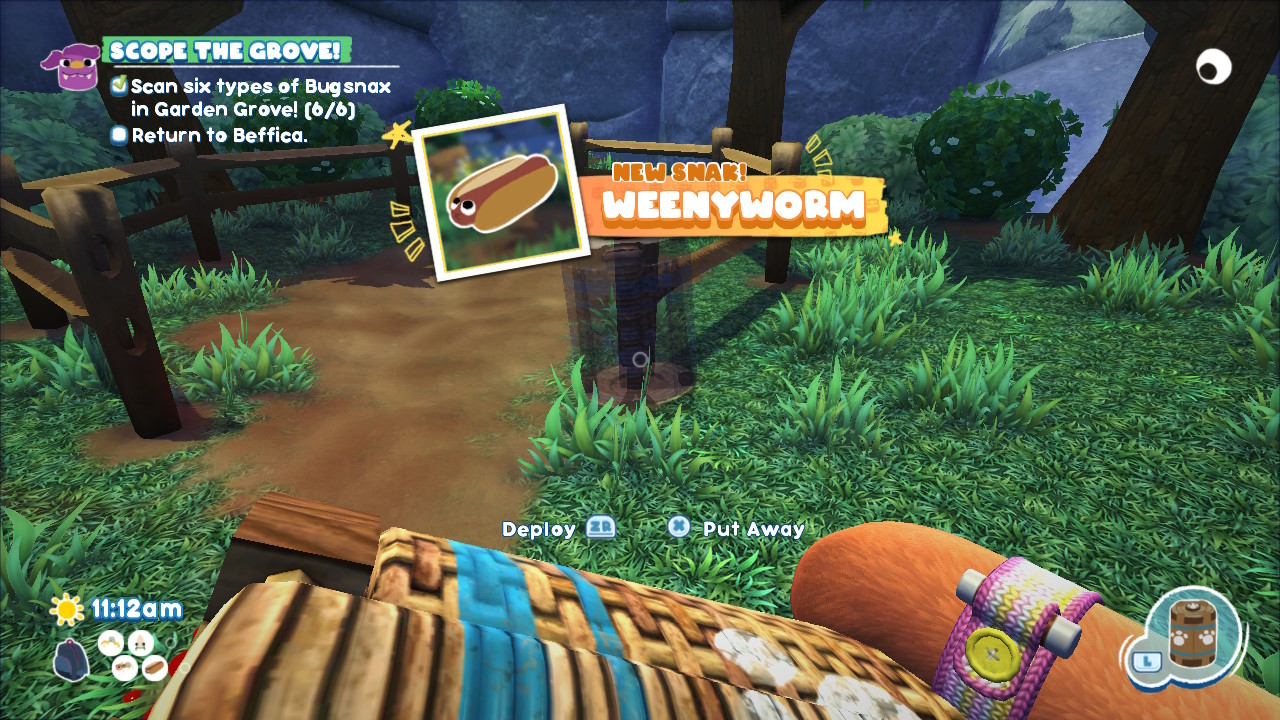 You’re a no-name journalist of all jobs in this crazy world and have been sent to the mysterious island, Snaktooth, to interview Elizabert (Lizbert). Lizbert is an explorer, and upon arriving at the island you meet Filbo, who informs you after a series of events that Lizbert has actually gone missing. Filbo gets you up to speed on what has happened – he is the mayor of the now disbanded Snaxburg and Lizbert has disappeared because of a series of earthquakes that have been taking place. In addition to the earthquakes, there have been some quarrels and disagreements among the townsfolk that caused them to leave. Filbo asks you to bring the townsfolk back and in doing so can interview them with the hopes of figuring out what happened to Lizbert, and what exactly the history of these Bugsnax are.

The premise and story of the game are simple: travel to the island, interview the island folk and find out what is going on. You first need to get all of the inhabitants back together again and interview them so you can get to the bottom of what happened to Lizbert. Overall, the story and characters are goofy and interesting and fit well into the crazy world the developer’s set out to build. 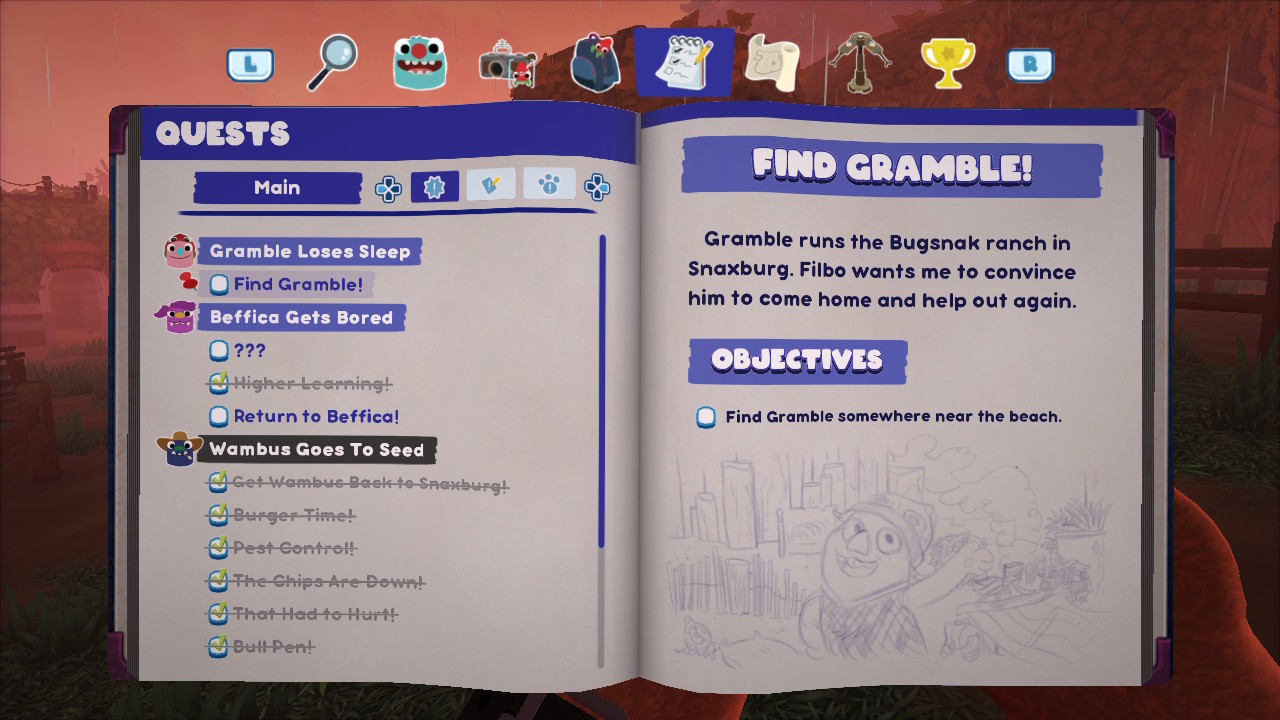 With Filbo asking you to go find and bring back the townsfolk, you set out to do just that. But you quickly learn that in order to get each inhabitant to return, you need to complete a series of quests in order to convince them to. A majority of these quests require you to capture some Bugsnax and then report back. So, what exactly is a Bugsnax? Bugsnax are snacked themed monsters. There are over 100 species for you to catalog and collect. Each Bugsnax has a unique way of being caught and that is the core of the game.
You use your camera to learn about each snax, such as their movement paths, what they like and dislike, etc. Some snax like ketchup, others like hot sauce or chocolate. You can then load condiments in your slingshot to be hurled at the snax, ground, or other tools in your arsenal with the goal of luring the snax either in your net or a trap. Some snax can’t be caught by the net as they are too big and need to be caught via the trap. However, just luring them into the trap won’t always guarantee you will be able to trap them. 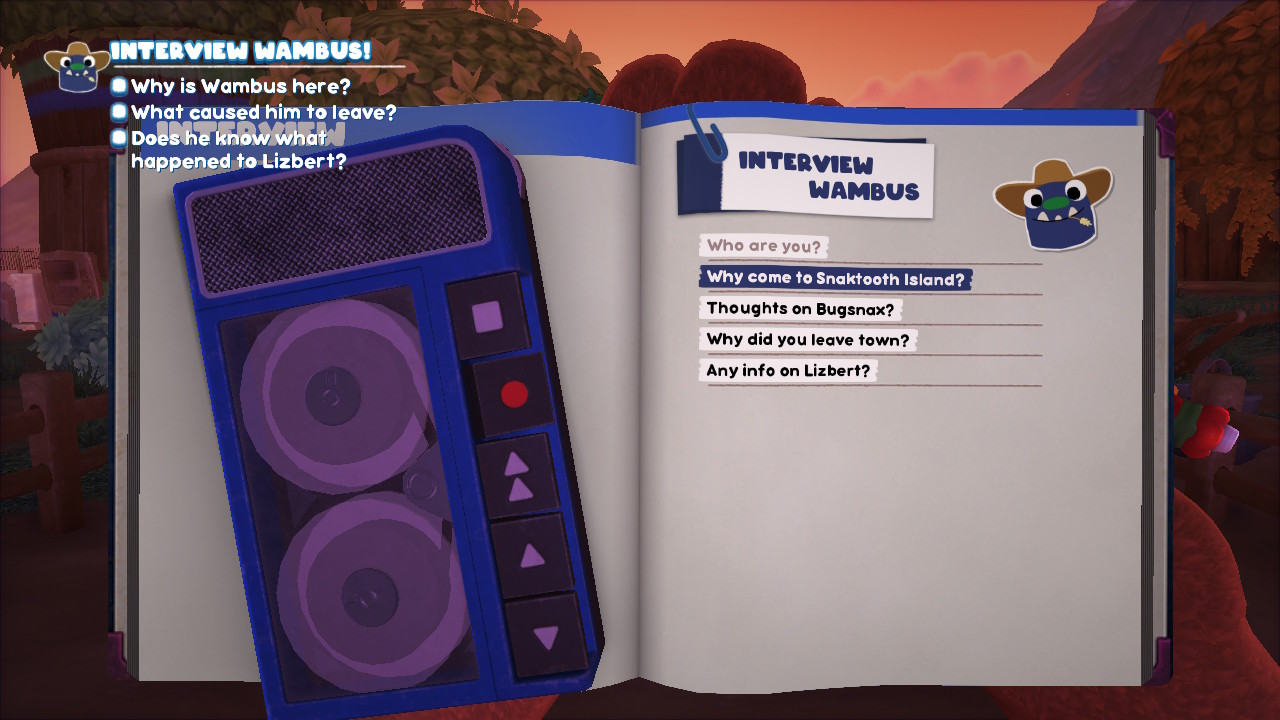 That is pretty much the extent of the gameplay loop and at first, it’s fun and addictive learning different ways to catch the snax using your various tools. But after a while doing the same task over and over again, it does start to wear thin. You talk to the various inhabitants, fulfill their requests which, for the majority, is “catch this list of snax and feed them to me” type of content. Sometimes they request you to specifically feed them certain body parts. You do this multiple times over traveling to various areas such as beaches, forests, and snow-covered mountains. As you progress the story and complete the tasks, the residents will reward you with items to customize your home with. While the puzzle mechanic is fun and clever at first, it does get tiresome and the desire to find and capture all the various snax loses its appeal. I wanted more variation in gameplay and hoped there was more to with the snax then just catching and feeding them to people, but unfortunately there really isn’t anything else. 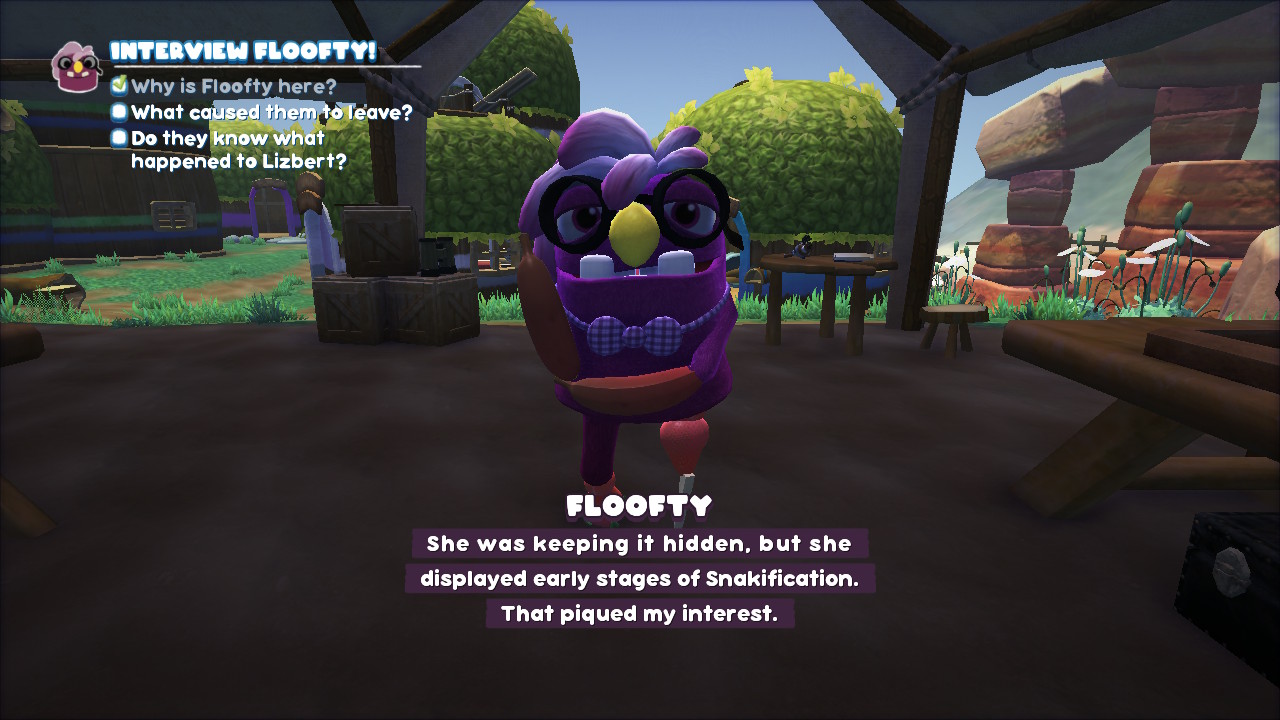 Bugsnax performance on Switch is a mixed bag. It’s nice to see a team take a game that was designed for the PS5 and get it to run on the Switch, and for the most part it does outside of some long load times and occasional pop-in. The load times are generally an issue when first starting the game and loading into one of the areas or switch areas. The pop-in really doesn’t affect gameplay – it’s just noticeable as you walk around the environment and more because the game is played in first person. The first-person perspective controls and camera take a bit getting used to and don’t feel as tight and responsive as I would have preferred.

Visual gripes aside, the writing and specifically the voice acting are well done and something you don’t always see from smaller indies adventures. I appreciate the entire narrative being voice acted and the performances done for each character felt unique and gave each of the island’s inhabitants a personality of their own. 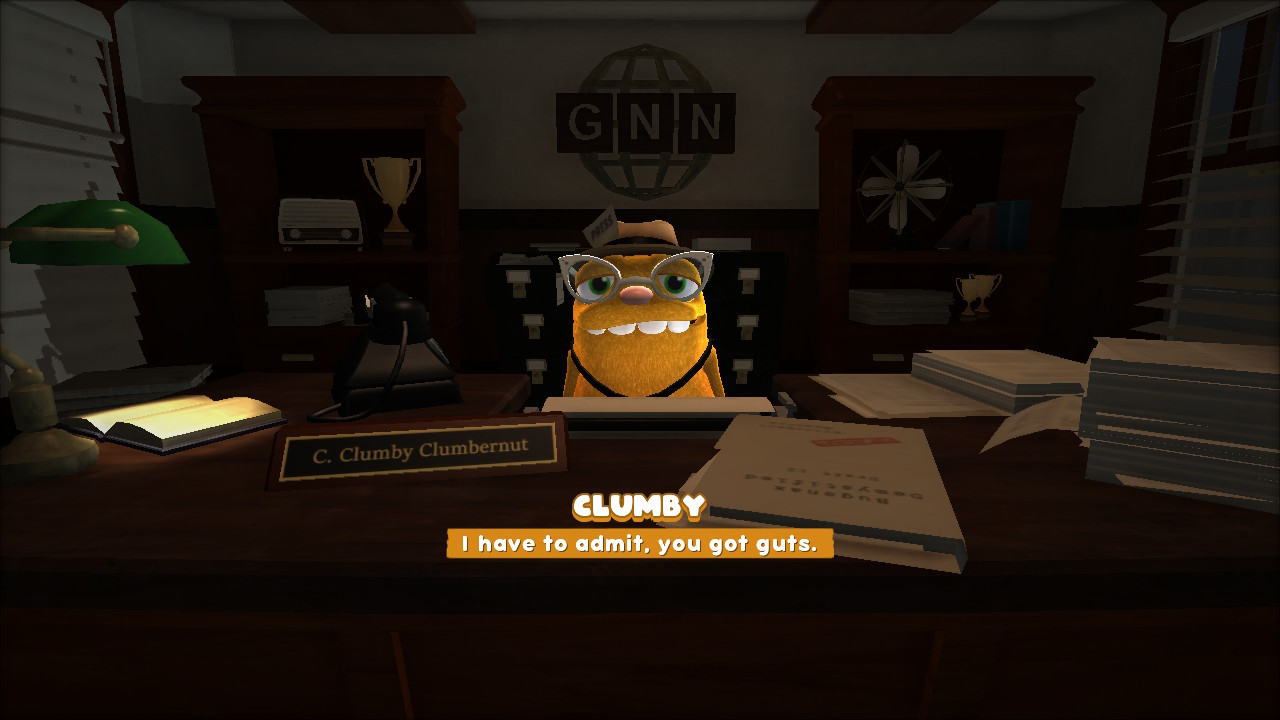 Overall, I left Bugsnax feeling disappointed. I like puzzle and monster collecting games and figured this was going to be a blend of both. Using the various tools at your disposal and figuring out the combination you need to use to capture a snax was rewarding at times, but when I had to do it for the third or fourth time it became dull.

What I ultimately experienced was a six to seven-hour adventure that felt very repetitive and full of fetch quests. The story, premise, and world the developers set out to create had a lot of potential, but I feel the game didn’t live up to my expectations. I think I prefer Pokémon Snap and its puzzle mechanics especially if you are in the mood for a more casual experience. That said, if you are looking for a game that isn’t really long and you don’t mind repetitive side quests, there is definitely some fun to be had here. Just be mindful of the technical problems associated with Bugsnax on the Nintendo Switch.