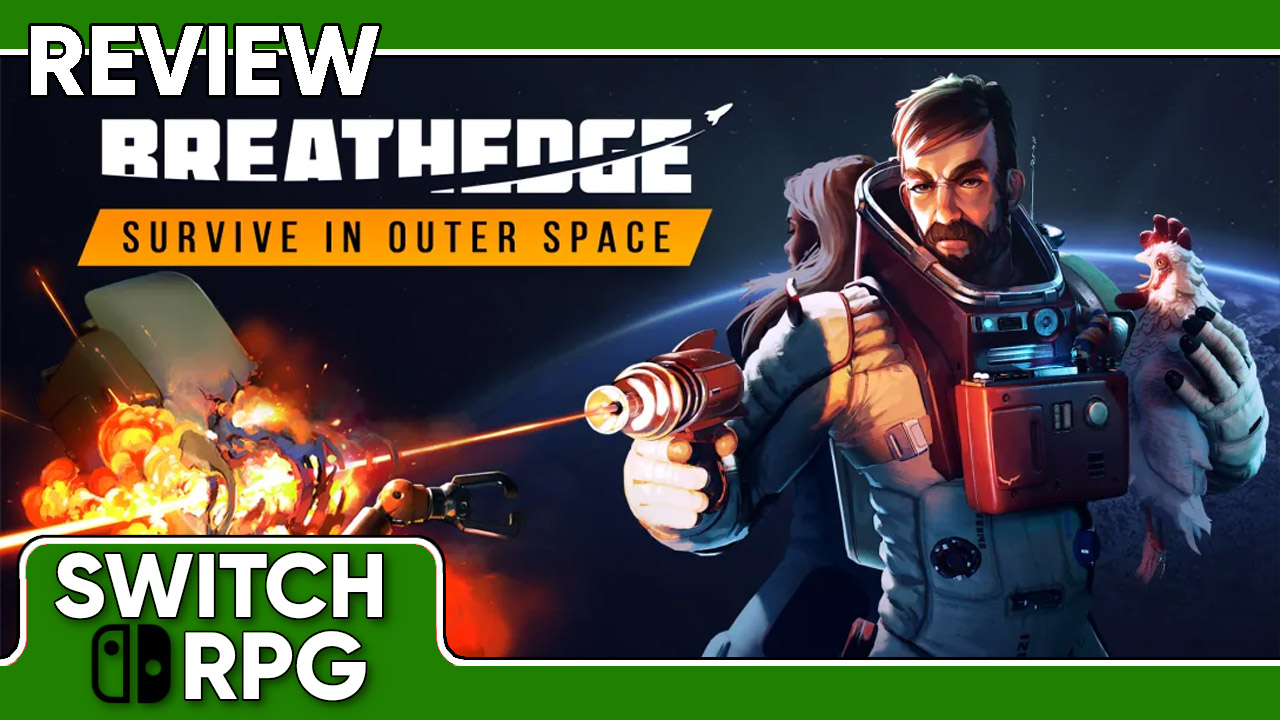 I’m just going to say it now, and also probably once more in the story section. But the use of irony in order to subvert player expectations only works if used sparingly. Breathedge does not really understand this, but considering you’ll spend more of your playtime in the vacuum of space, listening to serene and subdued piano tunes whilst managing oxygen and hunger levels, maybe you’ll be able to forgive this title for its over-indulgent sense of humor.

But if you’re going to do so, you might want to be familiarized with the ins and outs of what Breathedge is all about, because if you’re planning on playing this game on the Nintendo Switch, there are a few cautionary disclaimers I would give before strapping on your spacesuit. Is Breathedge the ideal space simulation title, or does it careen out of control? Read on and find out. 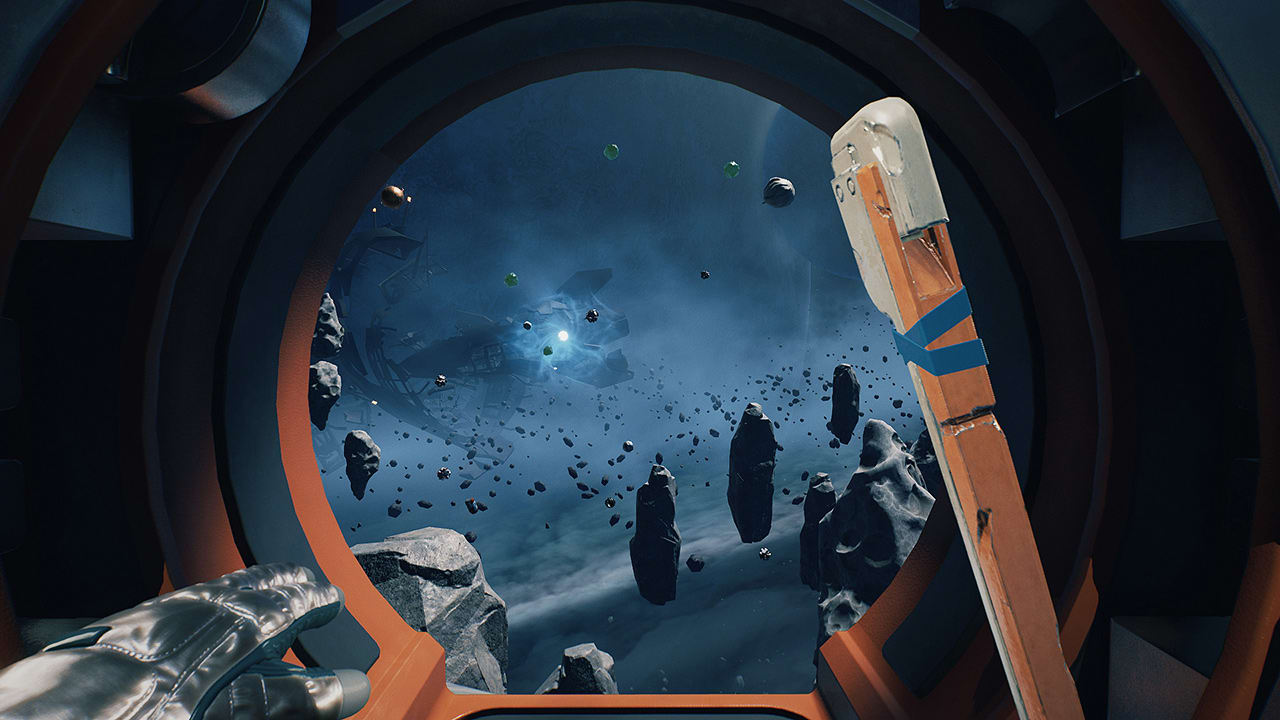 Breathedge has its protagonist scrounging up materials in space in order to survive, improve their equipment, and penetrate further into the wreckage of a massive space-cruise ship. One might wonder exactly how massive this spaceship would need to be in order to provide a hefty fifteen-to-twenty hour playthrough. The answer is, quite sizable, and spread in all directions. Because of the nature of space, you’ll need to explore in all directions, and though the wreckage is arranged in a relatively reasonable playing space, there are times where you’ll need to ask yourself, “am I really supposed to get there?”

The answer is “yes,” so you’ll need to figure out how: will it be modest, incremental upgrades to your oxygen reserves and spacesuit, or the maneuverability? Or will it be via the construction of new tools that allow you to gather new materials or replenish oxygen out in deep space? Either way, you’ll need to be mindful of your inventory limits, hunger, thirst, and oxygen levels, and the durability of just about any tool you’ve created. In addition to all tools having a finite amount of uses, you can also only equip them to a pitiable four quick-access slots, so you’ll need to be very intentional with your loadout as you embark from safe zones.

Though you’ll eventually find other pockets of air to access throughout the field of debris, you’ll be very limited in which directions you can traverse initially, but it is important to remember that the world is approachable from all angles. However, you’ll also have environmental hazards to be wary of, such as radiation, the coldness of space, somehow-operable security drones and turrets, and some more dastardly foes as you reach the later parts of the game. Fortunately, one of the simulation aspects of the game involves base-building, which provides a cozy home base for the player to research new blueprints, park their eventual vehicle, and customize with a great variety of furniture and other dumb things. However, interior design will hardly be the first thing on your mind when materials are scattered few and far between. 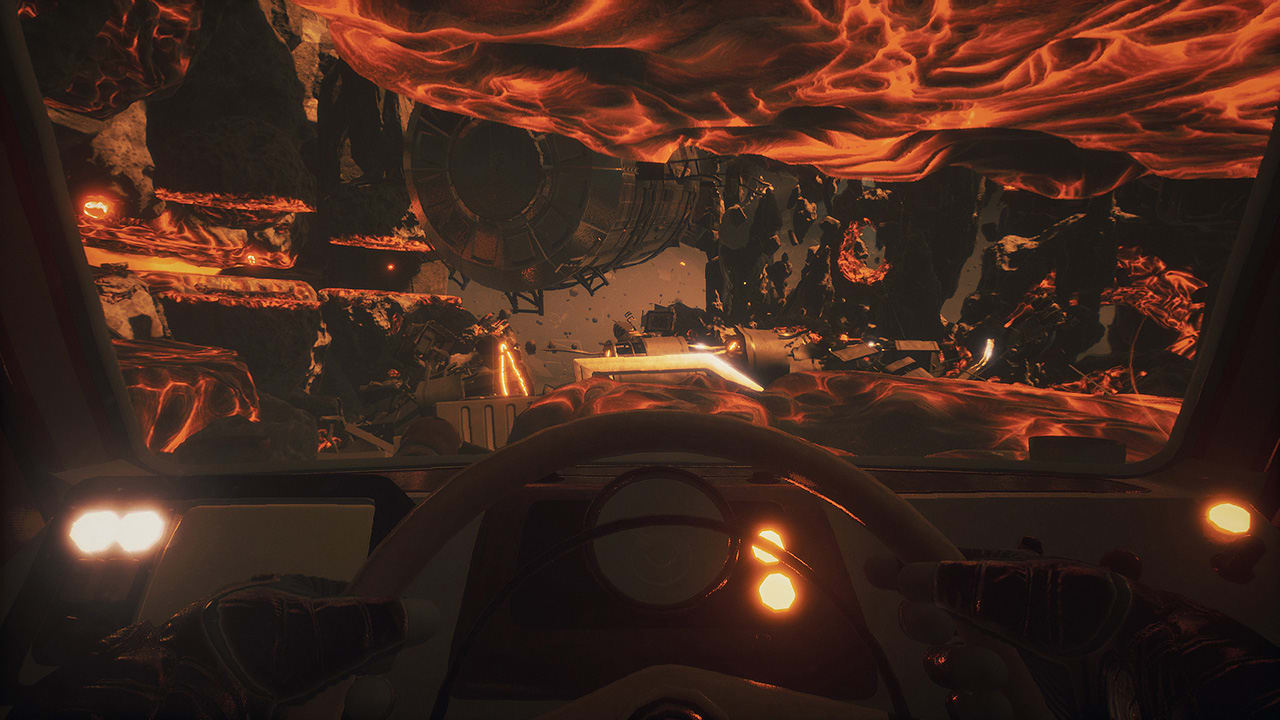 As mentioned before, Breathedge likes to think it is a very funny game. In some ways, its slipshod crafting results are indeed humorous, and where I found most of my delight came from during my playthrough. A blunt weapon cobbled from electrical tape and metal proves one of the most useful devices in gathering, while a combination of scissors and wiring makes for another silly extraction tool. One of your eventual, primary methods of traversal will be a repurposed vacuum cleaner, which doubles as a space-motorbike. Some of the item descriptions are also quite humorous, as well, but a voice that wears out its welcome fairly early on is at your suit’s A.I., which can’t help but offer a subversive comment every time you come across a new interactive element. Perhaps it’s because this voice is what actively progresses the plot, or perhaps it’s because it is tied to every bad joke in the script, but ultimately, the delivery becomes tired and monotonous to the point where it ultimately feels like background noise when it chimes in.

The only problem with this notion is that this voice also gives you very crucial information about narrative objectives, so you have to pay attention to its directions and advice in order to have any inkling about what you should do next. This is unfortunate, because it proves the most aggravating points about Breathedge – its internal logic is so ironic, so subversive, that you can’t expect anything to work predictably, and that underneath its veneer as a space survival simulator, it’s actually a painfully linear experience.

There are several points where you will be given the opportunity to explore multiple objectives, and each has a self-contained micro-narrative surrounding it that rarely relates to one another, save thematically. The general gist of Breathedge seems to be “mismanagement at every level,” which stops being amusing after the third or fourth instance. Another issue with the narrative is that it is extremely reactive – your player character has had little influence in the events leading up to the start of the game, and because everything is simply floating in space with an A.I. explanation and crafting objective associated with it, you feel as if most of your input is insignificant. Which is true, but still a bit sobering. 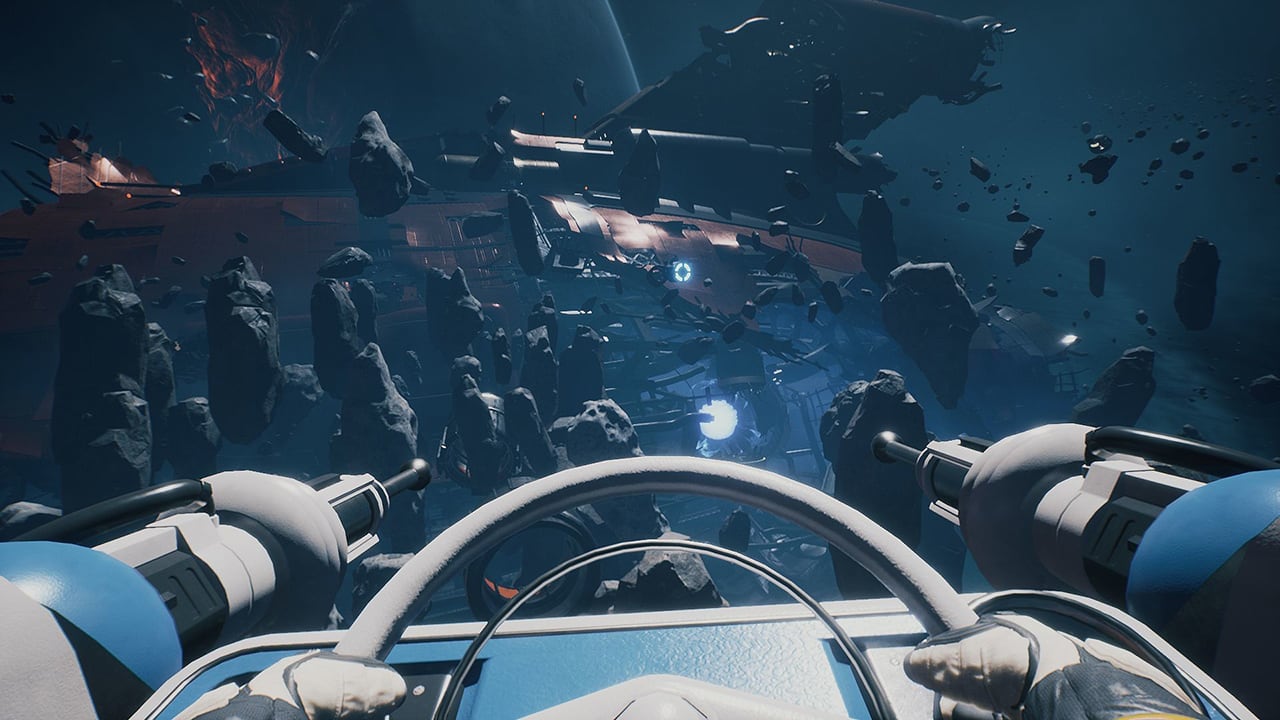 In terms of aesthetics, Breathedge is a mixed bag. There’s a subtle 1950s vintage sort of aesthetic applied to residential areas in specific, but these references are a bit too few and far between to create an artistic motif. While the frozen magnificence of space is impressive, and seeing literally everything splayed out in front of you from the very start of the game is thrilling, the game’s reliance on using lighting as a progression unlock means that things can get rather dark. There are a number of resources that must be mined from asteroids, but don’t pop-in until you’re within a reasonable distance.

Some of the resources are just incredibly difficult to notice in general, with plastic and wiring being the worst offenders of the bunch. Also, the person who designed the model for paint as a resource was either tired of their job or hates the player, because it’s nigh inscrutable. The text size is small for both tablet and TV mode, but the crafting menu text is exempt from this, thankfully.

The last note I would make note of is the OST, which is a paradox. Both soothing during its space-drifting sequences and mind-numbingly irritating when indoors, it strikes a frustrating balance that luckily skews towards the former rather than the latter. You’ll be able to relax thanks to the overwhelming percentage of time spent in space rather than on board one of the Breathedge vessels. Even so, these tracks loop very quickly, so you won’t be listening to anything particularly grandiose.

I’ve been playing Breathedge for longer than I’d like to admit, and this is due to two issues that are intentional and accidental, respectively. The first issue is that this game is very obscure and directionless, which is both a jab at its premise and a point of ire. There have been several junctions where I have been left gathering resources with no real understanding of what my goal truly was, and several more where an objective is clear, but I don’t have the right resources for the job thanks to how Breathedge balances – or rather, fails to balance – its disparate gameplay elements. 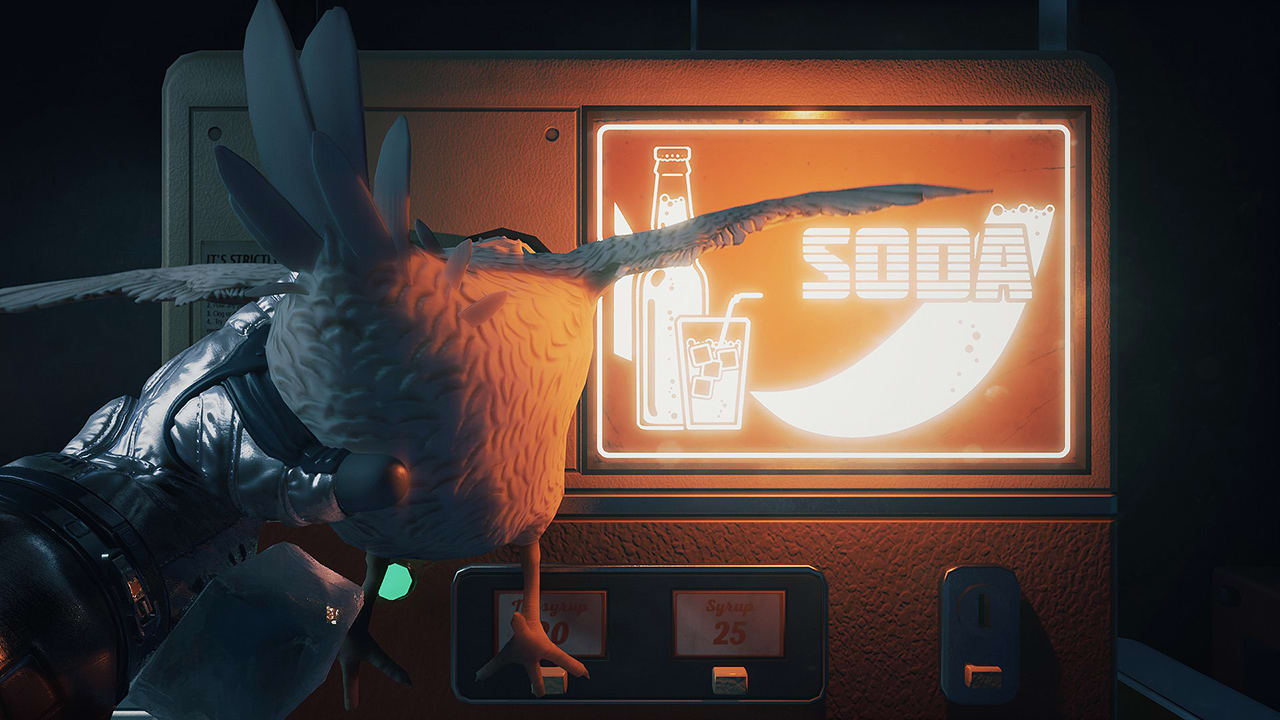 You’re supposed to be progressively enhancing your equipment for survival, but those same resources will often be required for very specific items and are never in high reserve. There are specific blueprints you’ll scan throughout the field of debris that are sometimes necessary, but sometimes not, the difference merely dictated by the whims of the developers, sometimes in particularly irritating ways. You’re supposed to survive, but the game pushes you into scenarios that feel unsafe and unwise, all for the sake of comedy. Ultimately, this wore on my patience and caused me to step away from the game.

The other issue is that Breathedge is somewhat poorly optimized for the Switch. Issues with resources popping in and generally low visibility are frequent, though handheld mode actually feels much more manageable than playing on the television. Loading stutters aren’t unsurprising for a game so grand in scope, but they have an added sense of dread due to the most pertinent problem: frequent crashes. While the game does autosave each time you enter into a safe zone, the long loading times from the title screen and decent chunks of exploration that can be lost due to these crashes are disheartening and demotivating. I haven’t encountered an instance where I can reliably crash the game, and these can occur even when you’re within a safe zone, so it’s simply a hurdle you’ll need to overcome with frequent saving or prayers for a patch.

With all this said, I don’t think that Breathedge is a terrible game. I do feel you need a degree of patience and a willingness to keep your expectations in check, mostly because they will be subverted on a regular basis. While there is some enjoyment to be had with the incremental enhancements and objectives found in the game, the irritation that durability and resource scarcity bring with them and the nebulous nature of said resource placement (see what I did there?) make progress feel like a frustrating crawl. This game could definitely use a resource radar, though I can see how that might trivialize the wonder of its premise. Still, the vistas and majesty of the space wreckage is enthralling enough to stimulate your senses, and when you do feel like you have a reasonable objective, Breathedge can feel enjoyable. These moments just feel a bit too few and far between for me to give the game a wholehearted recommendation.