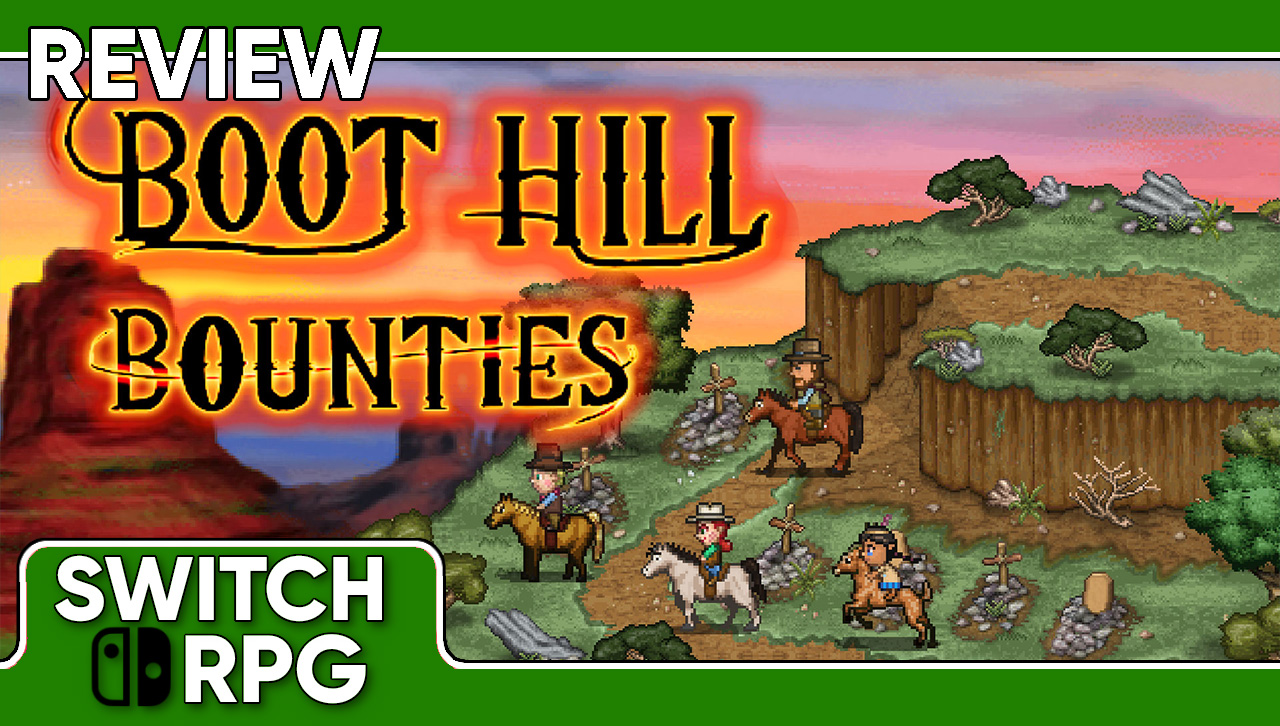 Tired of going through the motions with the same old JRPG spiel? Then this charming take on an already well-established genre might be a breath of fresh air! Boot Hill Bounties is a bit rough around the edges, but features a great narrative, characters, systems, and an amazingly interesting western world. Though the narrative strays far from the norm quite often – occasionally bordering on the edge of insanity – I like when a game embraces its core, pushes all its chips into the middle of the table, and demands your attention. If I have yours, whaddya say we track down the Saints-Little gang in the fabulous “old west” of Boot Hill Bounties? 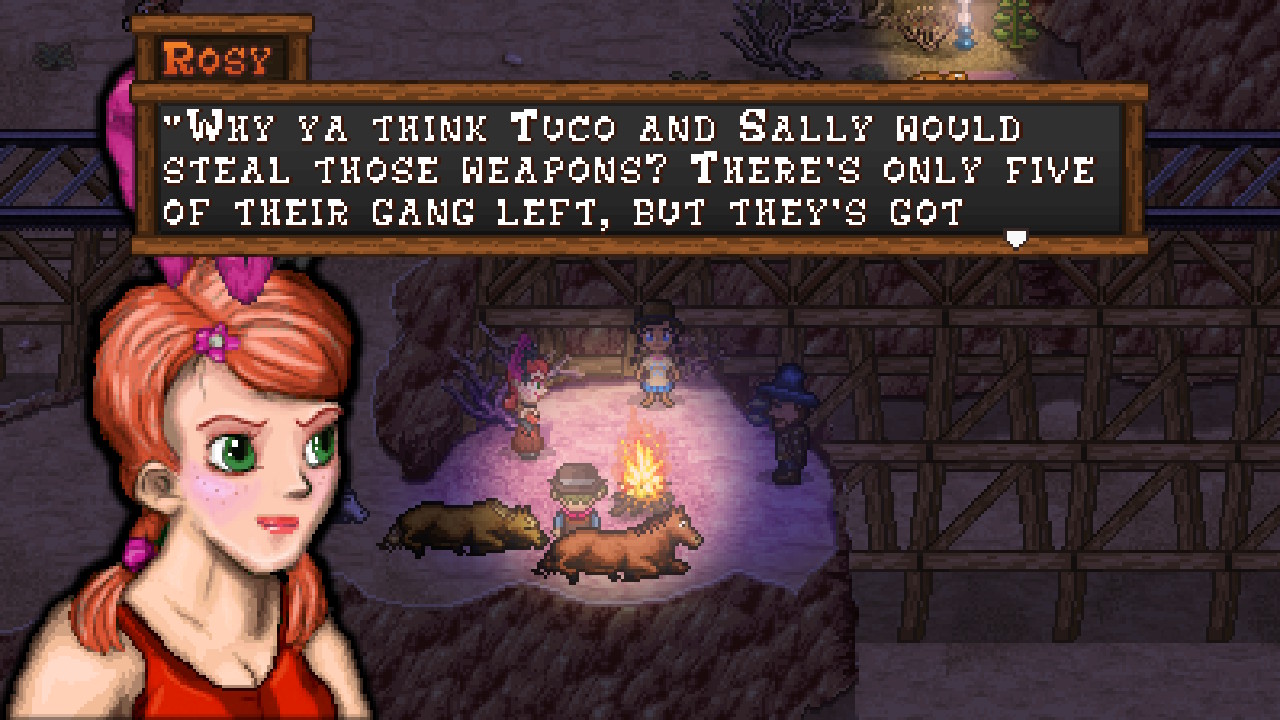 Boot Hill Bounties is an epically crafted western world, populated with all sorts of interesting and unsavory characters. Rabbits, drunken bar patrons, fish, and an array of wacky bosses will often challenge you along the way. Instead of traditional level up methods, you’ll acquire (and level-up) hats that provide each team member with different sets of combat skills called “vantages.” There are also “deluxe vantages” which become universal when leveled up enough. These deluxe vantages really let you mix things up IF you are willing to grind them out. It’s definitely not a comfortable feeling to unequip hats with vantage sets you’re familiar with, only don a hat with completely different vantages, but that’s kind the beauty of it all, too. 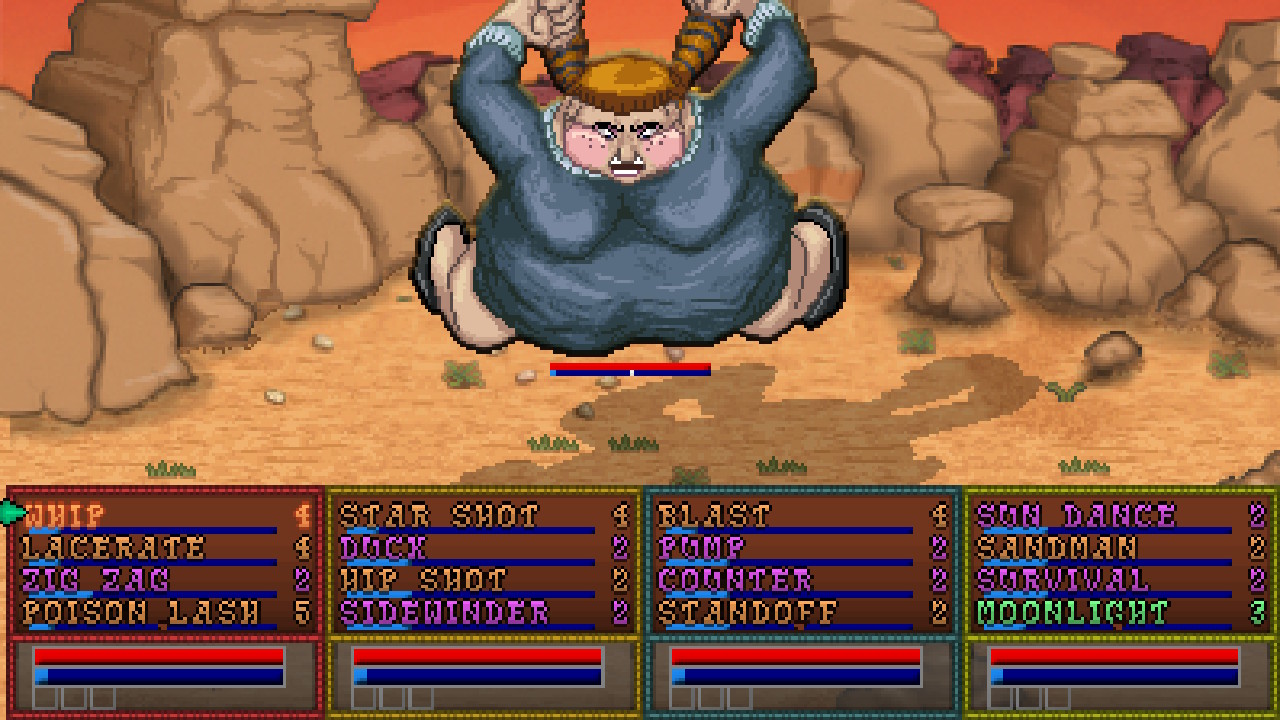 Boothill Bounties boasts a unique active combat system that is unlike anything I’ve really seen before. Once you start battling, the clock starts ticking and you are free to make your vantage selections. Each vantage costs a certain amount of power – as we all know, power is not unlimited – so choosing proper vantages is key to success. The flow of battle quickly becomes premeditating your vantage selections, waiting till you have enough power, then watching them execute. To make the battle more strategic, you have full control over pausing and unpausing the battle clock. Power regenerates the same for everyone, including your enemies, who are also charging power for use in their own vantages.

Knowing when to execute vantages that interrupt (or debilitate) your enemies is one of the main components to the Boothill Bounties battle system. The “charging active” battle system is bit of an acquired taste; it can feel tedious in the beginning but grows on you as you discover additional vantages and realize how to use them efficiently. I even managed to find a few combos that allowed me to steamroll some of the bosses! If given a chance, it’s quite a fun and fast-paced system — directly the opposite of the pacing you’ll be getting in regard to the rest of the game (more on that later). 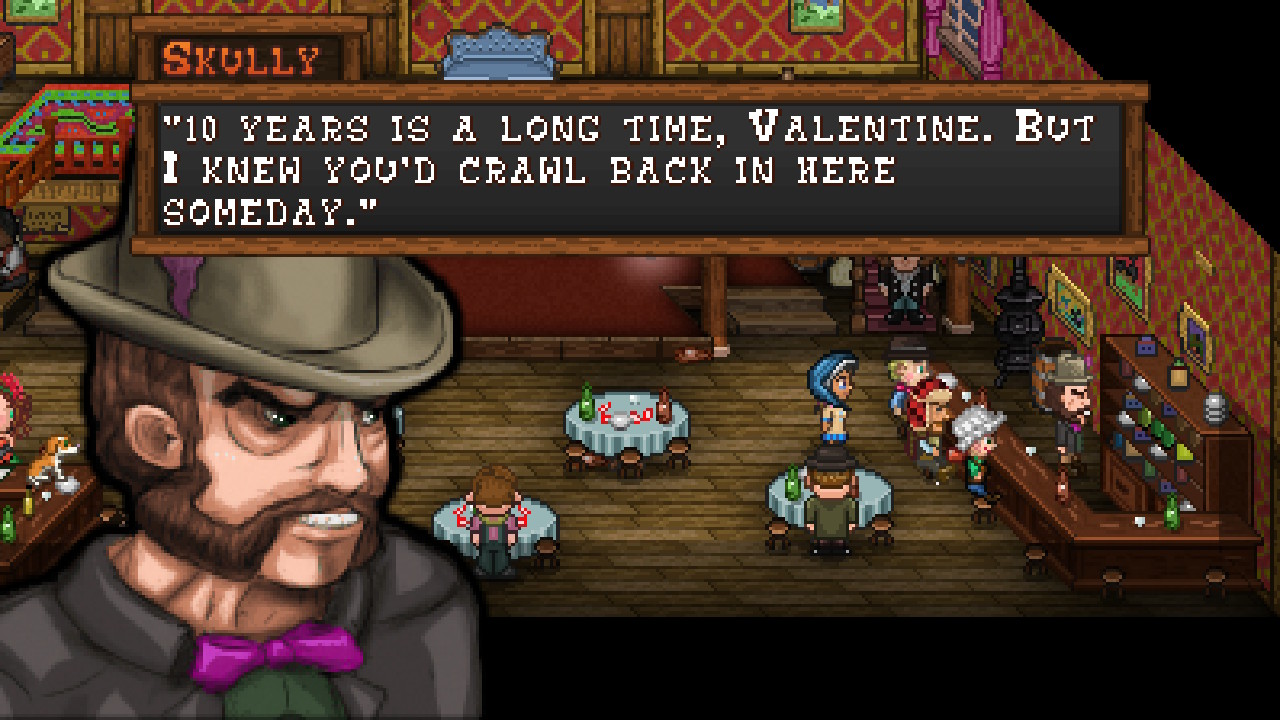 As you explore the many unique locations of Bronco County, you’ll step closer and closer to uncovering your team’s connected pasts and, most importantly, find out more about the notorious Saints-Little Gang. This Boot Hill Bounties storyline will bring you from drug-induced trips through the desert to perilous gas-filled cave spelunking. All the main storylines weave in and out of the party member’s historically connected pasts. It’s all very interesting, compelling to play, and drove me to nearly binge the entirety of this game in one weekend. Once you get started on one of the quest lines, it gets really hard to stop until you finish it up and find yourself wandering the city streets, searching the newspaper for what new things may have been reported.

One of the only drawbacks with the narrative system is that they give you a whole lot of dialog choices to make, but none of them seem to make a lick of a difference in the end. If you select something other than the expected outcome, one of your party members will be quick to pipe up and correct your ignorance or blind stupidity, setting you back on track with the expected outcome. This is railroading at its finest. 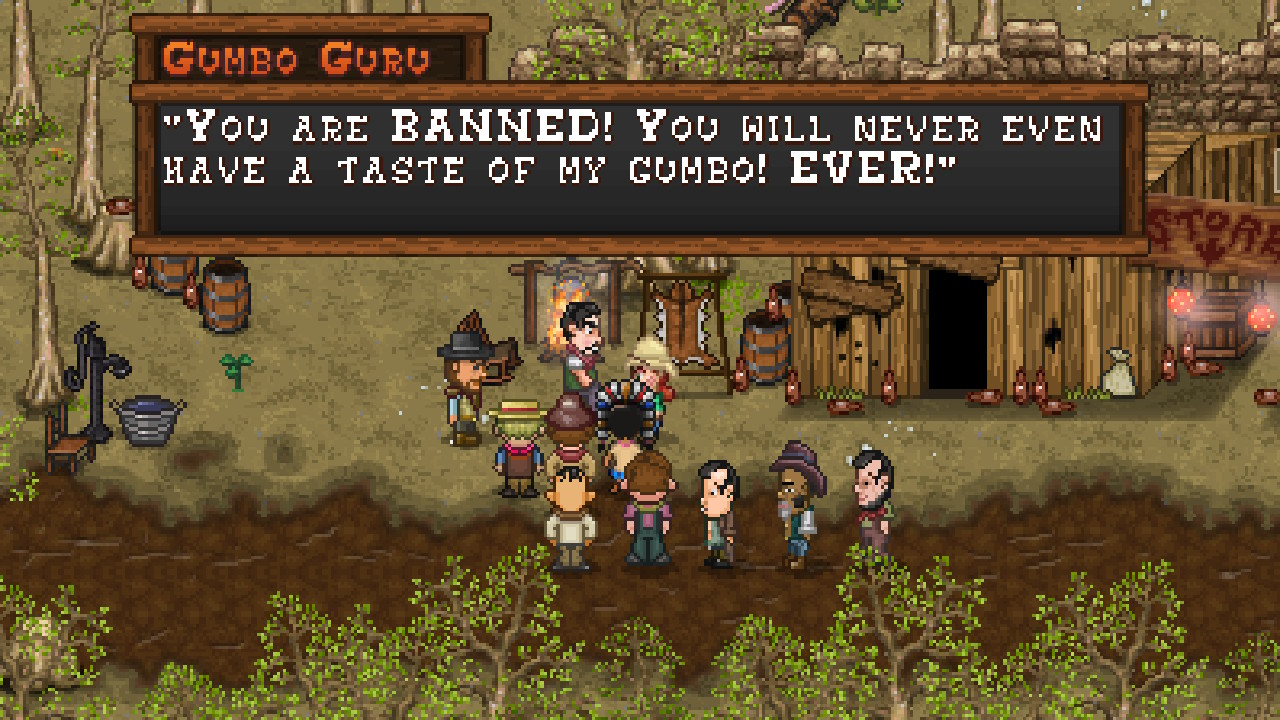 Boot Hill Bounties looks great, and I especially love the handcrafted art of all the monster’s battle pictures. The game description states there are “over 350 unique inhabitants of Bronco County” and it feels like that is accurate. Every bit of Bronco County is crafted to feel like it’s an actual part of the world, especially when it comes to the NPCs. The saloons are filled with patrons, the fort is filled with soldiers, and the woods are filled with Indians. Boot Hill Bounties has a very vibrant, lived-in world that is a pure joy to explore even after rolling the credits. 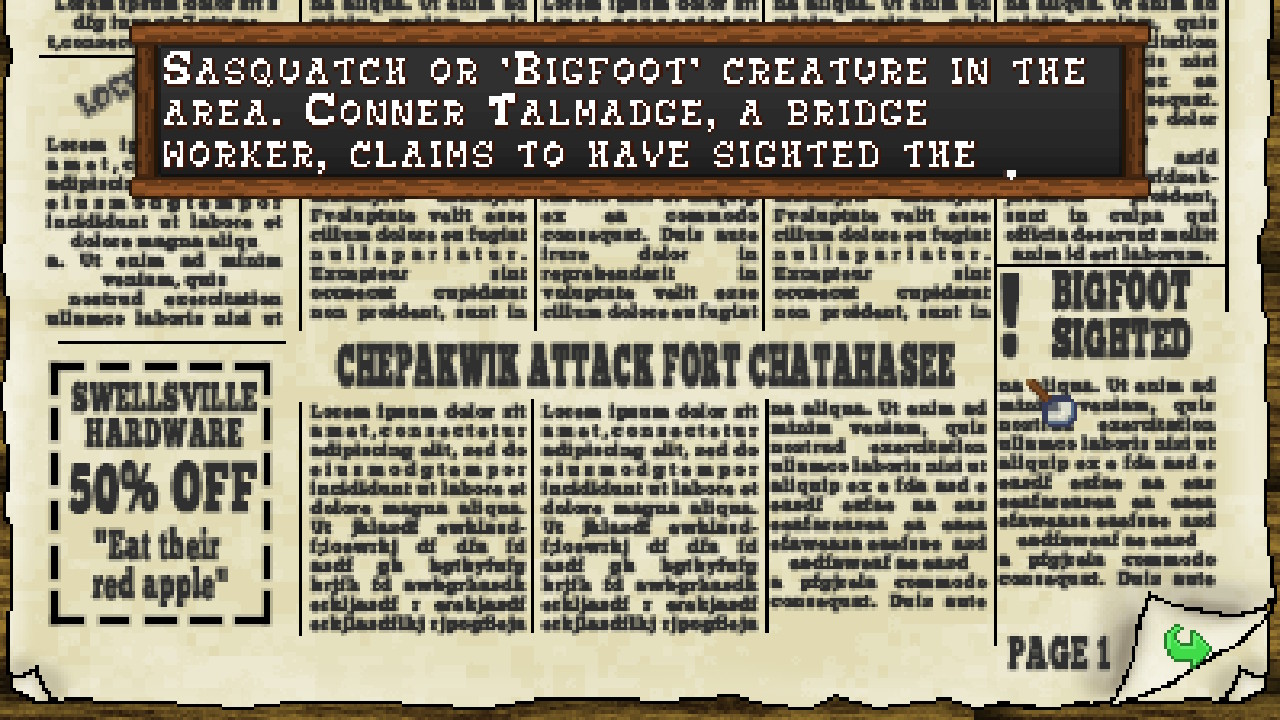 Boot Hill Bounties utilizes the local newspaper for all your questing needs — I’m not kidding! You receive pointers for both the mainline and side quests via numerous local newspaper issues. As you advance the game, the printing press will churn out another edition. You can find these newspapers in a variety of locations, so seeking them out is never an issue. While this may be clunkier than having a traditional quest log within the user interface, it deserves points for immersion and originality. This is just one of the many charming aspects of Boot Hill Bounties.

Puzzles and Side Quests 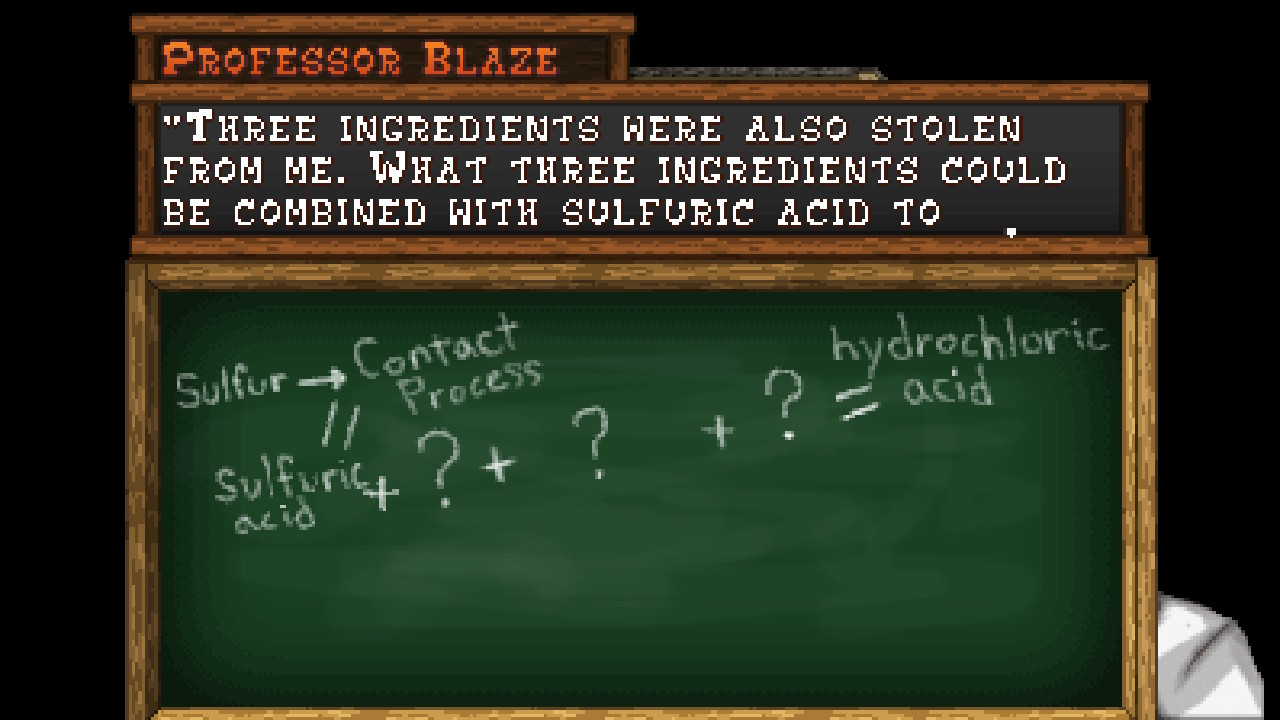 Boot Hill Bounties is filled with a whole bunch of puzzles to solve. Some of these puzzles come in the form of questions, such as the ones found in the classroom, while others come in the form of active battle puzzles. For the latter, you’ll need to figure out the correct combination or another puzzling element while also staying alive in battle. There are even locked safes with unknown combinations scattered throughout the world, and you’ll need to put your puzzling hat on if you want to unlock them all. All these elements add a tremendous amount of flavor and charm to an already solid main storyline game. To put things into perspective – after I finished the main storyline in roughly 25 hours, I had only completed 63% of the game.

Boothill Bounties is not without its fair share of issues and weird design decisions, as it is plagued by some bugs, extremely slow pacing, and a fiddly menu system. It should be noted that the developer is actively supporting this game and has patched it at least once since I started my own playthrough. A few of my concerns have been resolved and have since been removed from this section. Way to go, Dave! 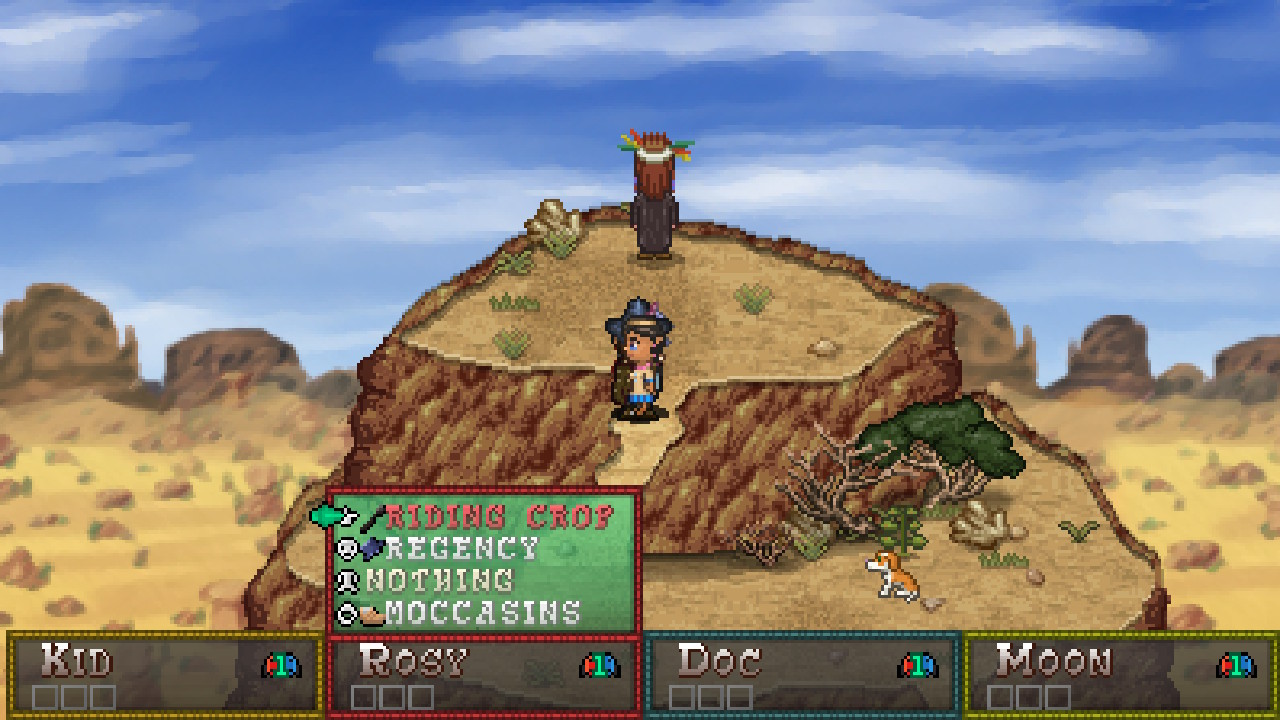 Boot Hill Bounties likely has the slowest pacing of any game I’ve played on the Nintendo Switch, if not of all time. Okay, maybe I’m being a tad over-dramatic, but much to its detriment (and your future sanity) you will needlessly wander around cities and wilderness areas searching for the one thing necessary to continue progression. With no real quest log, or even solid quest markers, the real trouble is not only finding out what you need to do, but where to do it. It’s all quite infuriating, at times, and is more than enough for the average player to save, close the app, and find something else to do. Yes, this is how many of the genre’s forefathers operated but that doesn’t mean we need to bring it back into newly developed games.

One of the other main issues is the outright lack of a menu system for equipping and organizing your items. Everything is done within a small box attached to each of your party members, and it’s quite cumbersome. For instance, to view a new hat’s vantages, you need to select it and hit a button. If you want to compare it against another one, you must do it in your head because the game isn’t giving you any comparison interface, or any assistance whatsoever. A little help would have gone a long way in subsiding some of the irritations found within Boot Hill Bounties. 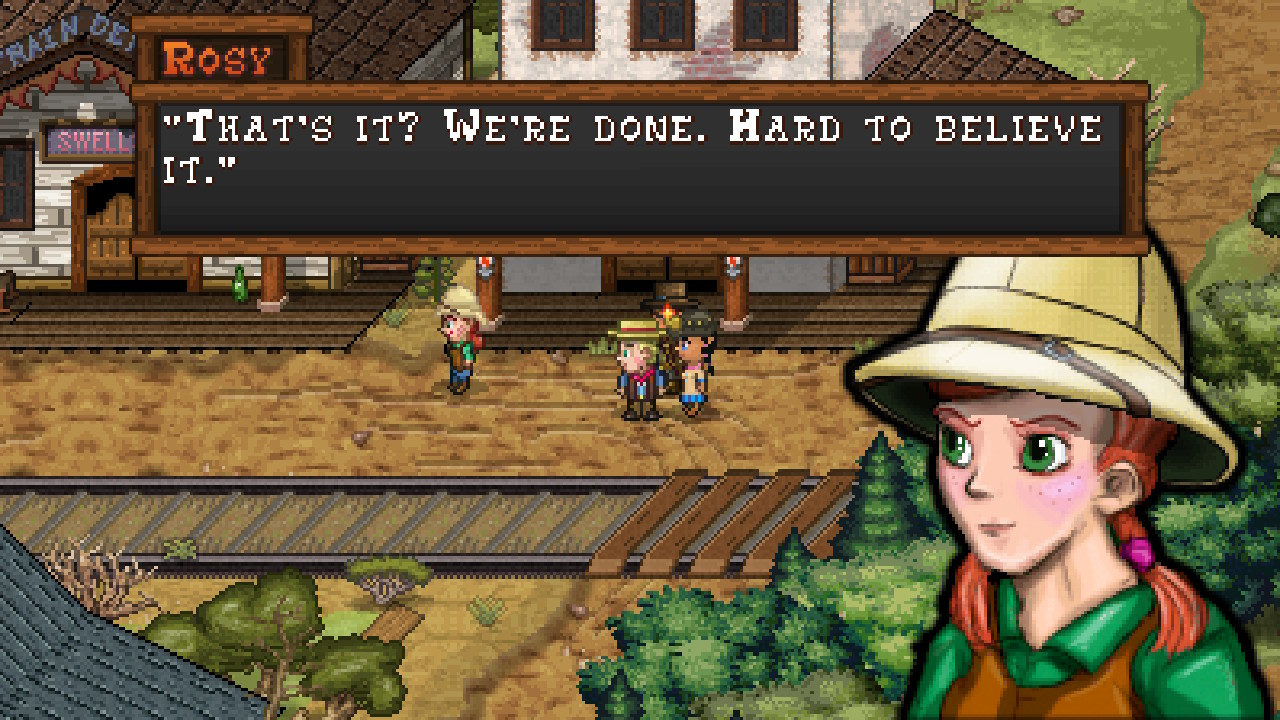 For me, so far, Boothill Bounties takes the cake for the “most surprising Nintendo Switch title” this year. While I originally picked it up for its pleasing pixel art alone, I ultimately fell for its wacky storyline that took me places I never expected to go. The battle system takes some time to get used to, but it adds a bit of fast-paced excitement to an otherwise slow and fiddly paced game. As a result, Boot Hill Bounties is an easy recommendation on the Nintendo Switch — just be wary of the slow pacing.