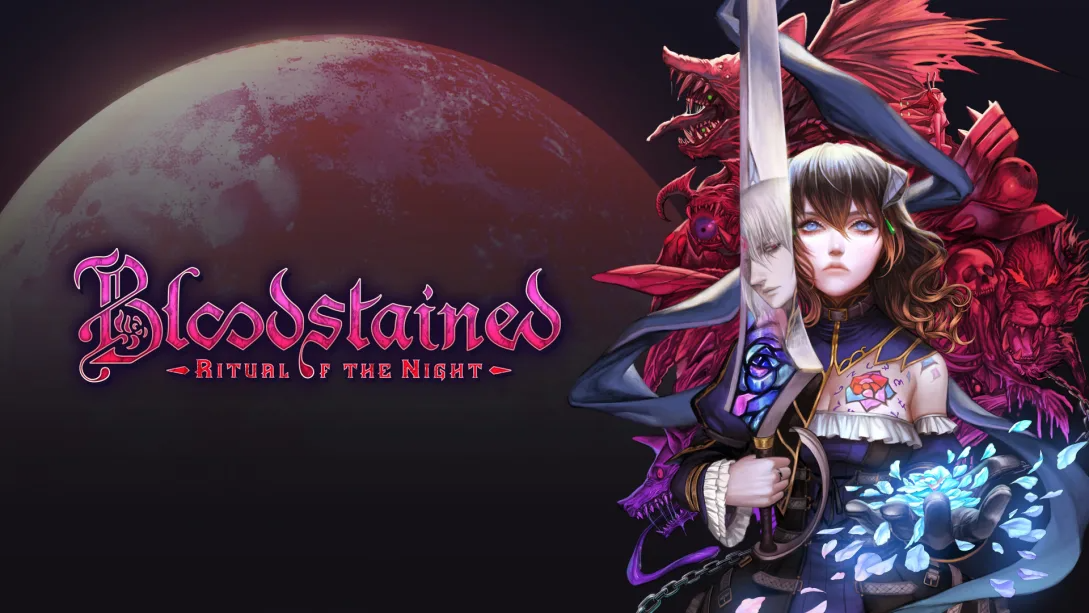 This review covers version 1.01 on the Nintendo Switch.

When it comes to Metroidvanias, there is nothing more synonymous with the genre than Koji Igarashi (aka Iga). Iga, known for this work with the Castlevania series (specifically Symphony of the Night) has returned to the genre with his crowd-funded spiritual successor, and the wait is finally over. The Switch has become the go-to platform for Metroidvanias since its launch, with greats like Hollow Knight, Dead Cells, Axiom Verge, Timespinner, and Monster Boy and the Cursed Kingdom, to name a few. Let’s see how Iga’s Bloodstained: Ritual of the Night, shakes out on Switch. 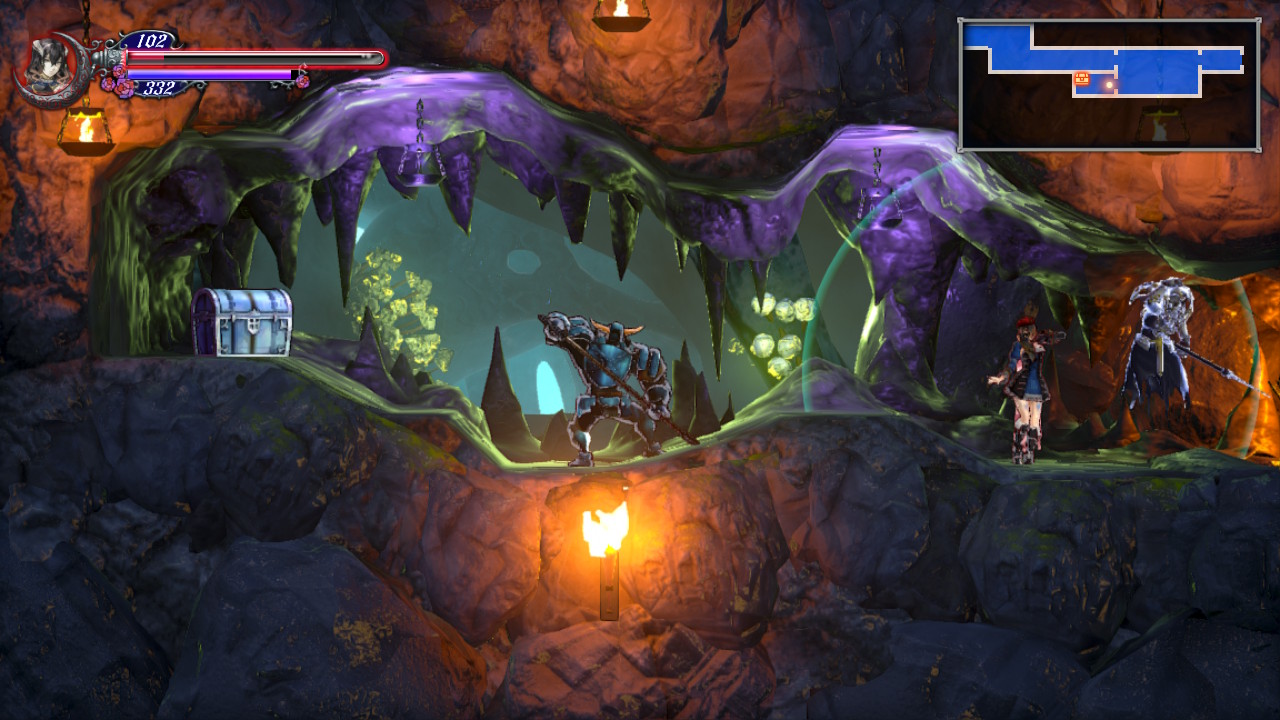 Bloodstained Ritual of the Night is a good looking 2D action platformer with themed 3D backgrounds to match the current environment. The game has a great look to it, making each area feel fresh and different while also staying true to its roots. With that said, the Switch version has definitely been downgraded compared to other platforms in regards to graphical quality. The Switch version runs at 30 FPS/720p docked and 30/540p in handheld mode. I much preferred handheld mode as the drop in resolution wasn’t as noticeable, and that is how I prefer to play Switch games anyways. It is hard to tell a difference in resolution while the game is in-motion, but if you pause to take a screenshot and then zoom in, it can look kind of ugly. Iga, ArtPlay, 505 Games, and WayForward have acknowledged these issues at the time of review however, and they are currently working on several patches to hopefully address them. 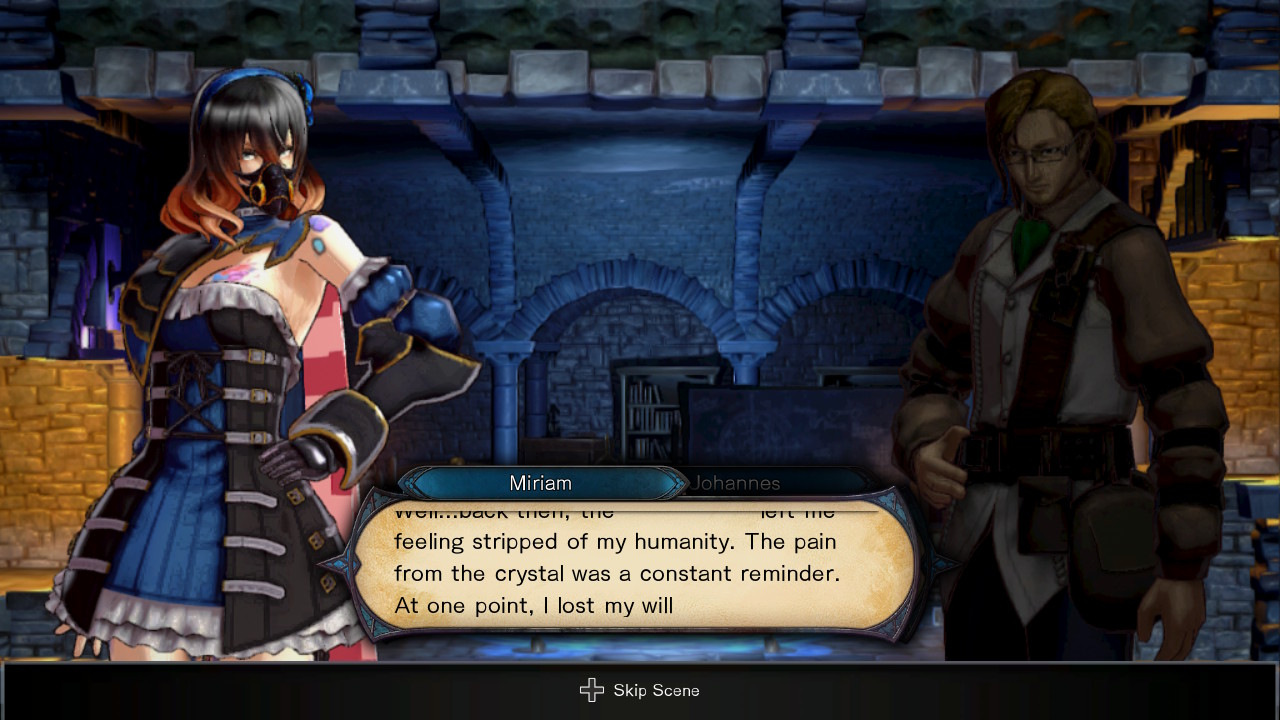 In Bloodstained, you play as Miriam, a Shardbinder. Shardbinders are capable of absorbing the essence of demons through extracting shards from their corpses. As the story opens, you discover Miriam and her friend Gebel are the last two surviving Shardbinders, as the remainder were sacrificed as part of the ritual to summon demons into the world. Unlike Gebel, Miriam fell into a deep sleep which saved her (in a sense). 10 years later, she awakens to discover the castle full of demons, and Gebel is not as she remembers. Now, she is tasked to rid the castle of demons and discover what has happened to Gebel.

As Miriam adventures through the castle, she will meet several NPCs which will give her side quests, some of which are fetch-quest like in nature: “find me this item” or “kill X of this type of demons.” They aren’t too involved, and many can be completed naturally as you progress through the story. The remainder of the story, which I won’t spoil here, is entertaining and has several plot twists, some of which are very obvious. 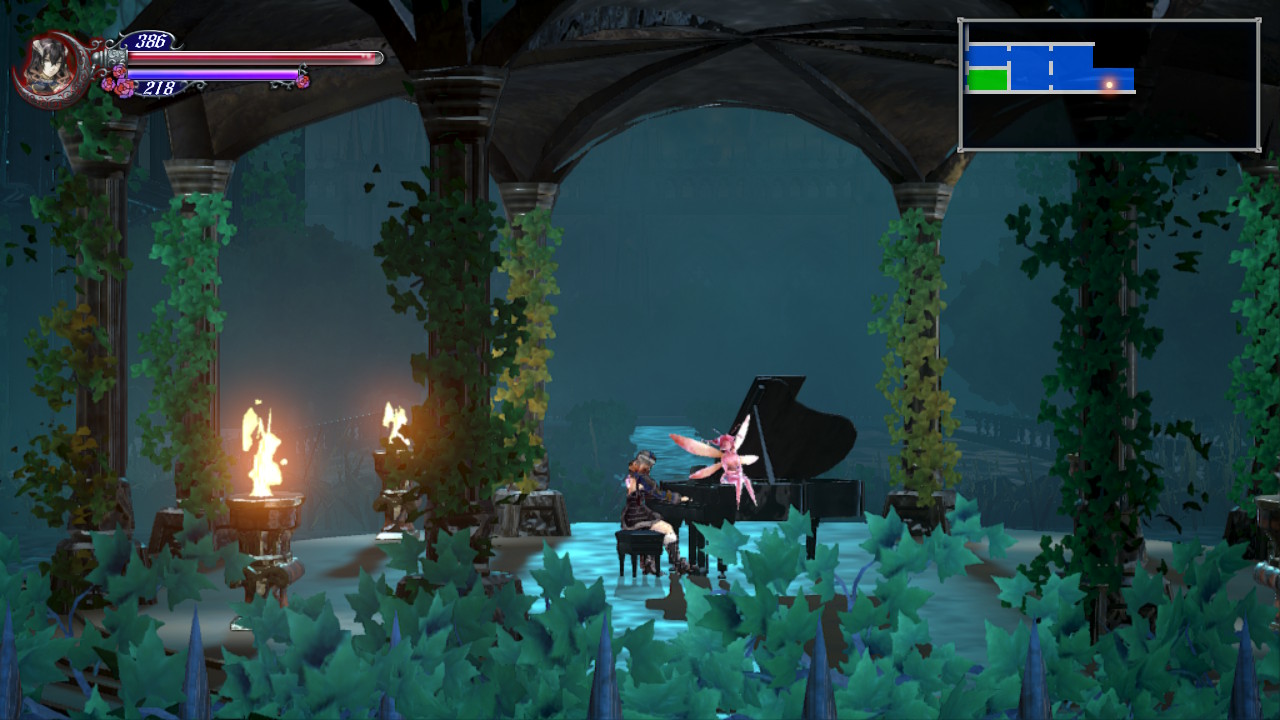 Bloodstained: Ritual of the Night is the definition of the Metroidvania genre. The gameplay is highly addictive and constantly forces the player to hunt down shards. Shards are dropped by demons periodically – some you will need to farm as the drop rates vary – and serves as the game’s power-up system. Every demon you fight has the potential to drop a shard, items, or nothing at all. Item drops include currency and crafting materials, the latter of which is used for cooking and creating your own gear. When a shard is dropped, Miriam will bind herself to it, allowing the ability to use that demon’s power from the shard menu.

There are many types of shards – some are passive abilities, some are familiars (companions that will passively assist you), and some implant permanent upgrades into Miriam, such as swimming and the all-important double jump. Users have the ability to customize their shard loadouts to their current need and play style. The game offers a lot of customization with this system, so much so that you can unlock the shortcuts system. This allows you to build and save several different loadouts, which you can easily switch between as necessary. 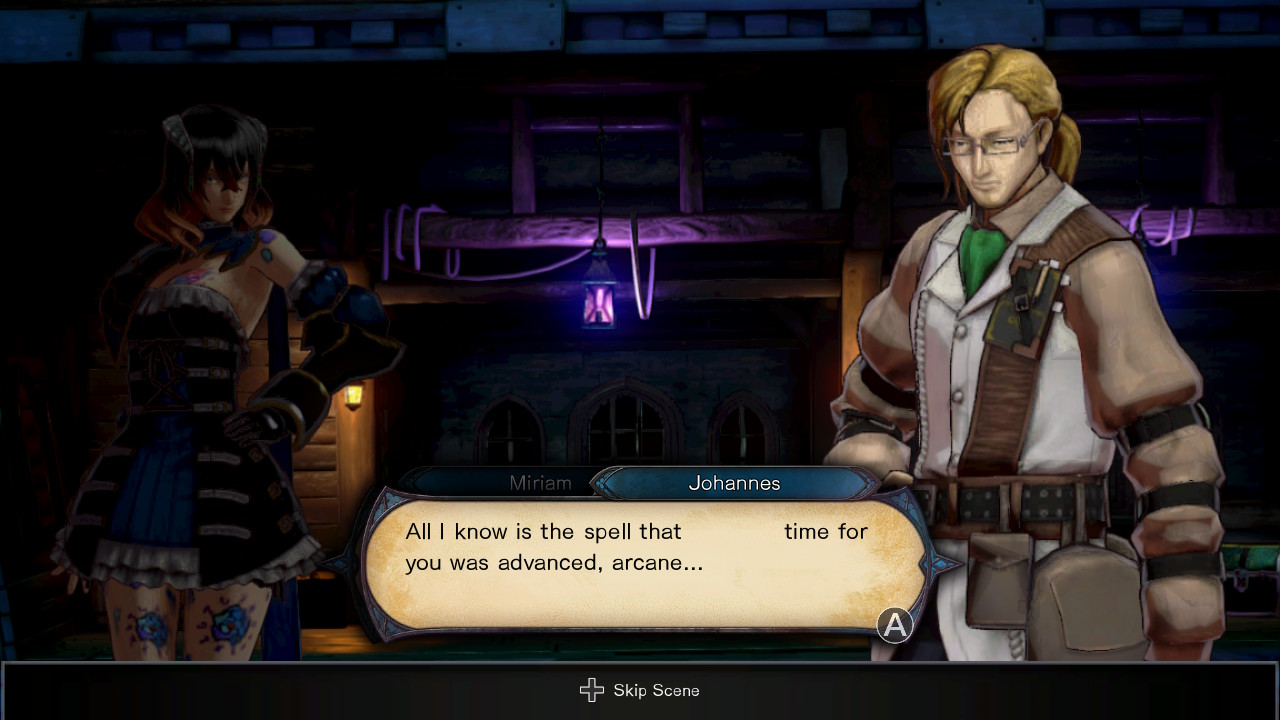 As you kill demons and acquire shards, you will be able to upgrade them to increase their power, or break them down for various crafting materials through Johannes (an alchemist) in-town. You also have the option of selling unused or excess shards to another vendor at the hub should you find yourself in need of some quick cash.

You will constantly be returning to previous areas with your new abilities or upgraded weapons to search out secrets and/or to discover what to do next, but none of this ever feels like a grind. For the most part, the platforming controls fine- though technical performance isn’t the best. An issue I experienced frequently had to do with excessive delays when transitioning between two vertically connected rooms. If you jump wrong and don’t make it to the next screen, you could fall back into the previous room, which isn’t a problem in itself. However, load times in some areas can be a bit sluggish, meaning you could potentially run into two back-to-back slow loading screens for no good reason. 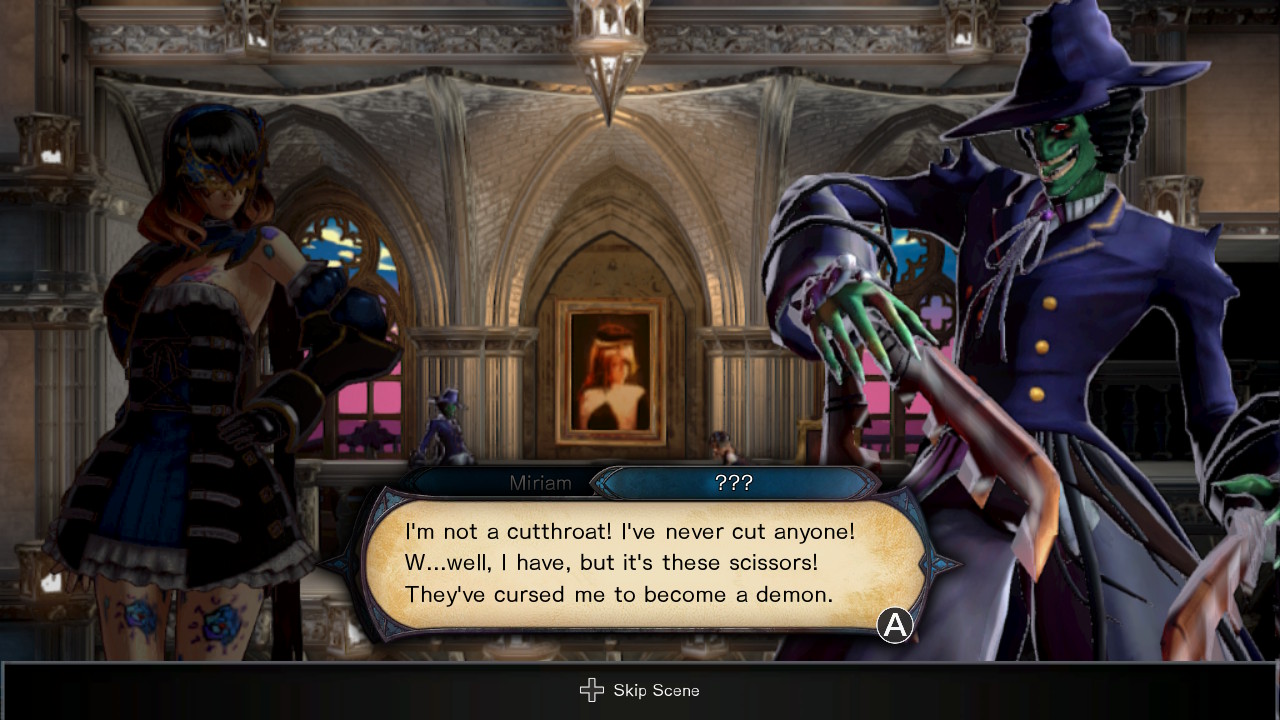 Bloodstained definitely has a learning curve and it doesn’t hold your hand. It will take some time to understand the shard system and optimally configure your loadouts. You won’t ever be lost in the game, as the map system is very well done. Usually, all you need to do is look for areas that are incomplete, travel to those areas, and that should put you back on track. If that doesn’t work, you can always talk to a NPC in-town that will occasionally give you some guidance on where to go next. You will still need to do some exploring on your own though, even with her advice. Be aware, it is quite easy to naturally find yourself at the “final boss” early, which will result in the “bad” ending. If you’re anything like me though, this will only fill you with a desire to jump back in and achieve the proper conclusion. 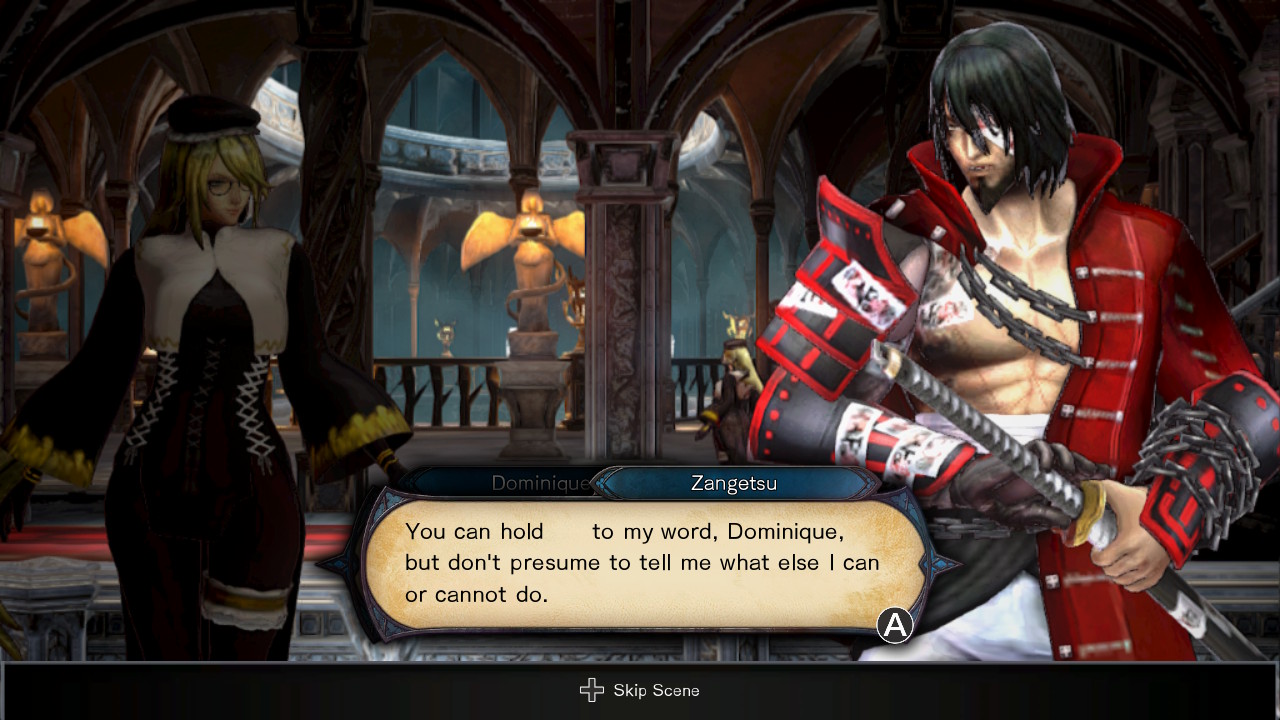 Iga has done it again. Bloodstained: Ritual of the Night is a masterpiece (with an asterisk) and shows true dedication and master craftsmanship to the Metroidvania genre. Carefully consider the asterisk though – what is there is amazing, but the experience can be rough around the edges for some, especially when it comes to the Switch version and the technical issues. I have heard other platforms are experiencing technical issues as well, but perhaps not as severe as the Switch. I have played the game 99% in handheld mode, and aside from the occasional missing word in text boxes, loading times, and general slow down when a lot is happening on screen, it’s been a pure blast to play.

For some, the game may feel dated, but I believe that is by design. Sure, save points and fast travel rooms could be one and the same, but I believe keeping them separate was an intentional design choice. The developers have stated they are working on patches, and as they are released, I will report back. It seems your experience on the Switch can vary, as I have heard from several members in our Discord group that the game has crashed on them, forcing a complete restart. I have not experienced these types of issues, but this is exactly why I am putting an asterisk on my verdict. When the game performs as intended, it is a fantastic entry into the genre and highly addictive. I strongly recommended this game if you are a fan of the genre as, to me, this game deserves recognition during future Game-of-the-Year discussions.