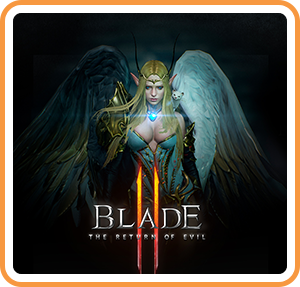 Over the course of the Switch’s eShop tsunami, an odd niche of games has come to catch my interest: small titles created by Korean independent developers. If you want to get more specific, mobile-title ports of Korean-developed games. Animus: Stand Alone was a title in particular that left me with mixed feelings. A title with gorgeous animations, gruesome monsters, and plenty of content was also rife with performance issues, and it left me wondering just how much the title was optimized to run on the Switch. As time is a flat circle, my Super Neptunia RPG review must be followed by another title with eerie comparisons to be drawn.

Enter Blade II: The Return of Evil- though it might also be “The Return of the Evil,” I’ve seen mixed descriptions from less-than-credible sources. It’s a Korean-developed mobile title that has women wearing questionable forms of armor that just so happen to be aesthetically appealing. But fanservice factor aside, does this title wow with content and art assets like Animus in addition to being a solid Action Role-Playing Game? As it turns out, a nice coat of paint might not be the only aspect required to gain clout on the eShop. 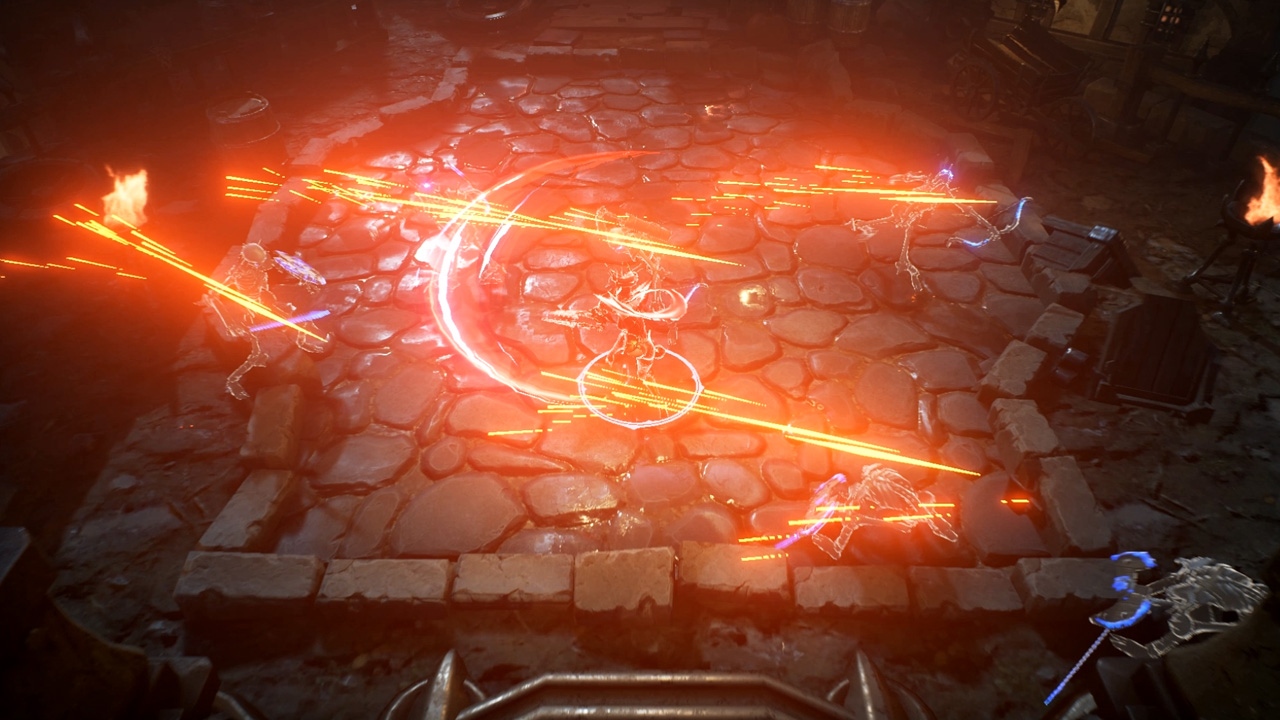 Blade II is a mostly top-down ARPG with a story told through its mission-based structure. No matter which of its four playable classes you choose, each will say the same things, though you’ll get the chance to see them interact with characters during in-game cutscenes, which is nice. Though Blade II touts four unique play-styles, these characters- the warrior, assassin, wizard, and fighter- all possess the same buttons, so to speak. Your basic attack combination is mapped to the Y-button, and all you’ve got to do in order to see those basic attacks all the way through is hold the button down, as the combo will automatically string together. Not only that, but there’s a bit of auto-targeting, as well, so if you’re hoping to start a combo further away from a group of enemies in order to finish out with a larger blow once they draw close, you might snap to one of your foes immediately and start pummeling away.

If you don’t press the control stick in the direction of where you’d like to unload your blows, this auto-targeting will tell your character to go off in whichever direction it pleases. There’s a little bit more to these combos, but only just: pausing in between blows, as the game’s one of many tip screens will mention, and continuing the combination attack within 0.5 seconds will trigger one of three Smash attacks. Sorry, Smash Bros. Fans, they’re not as thrilling as they sound. While some do have the ability to knock enemies off their feet or cover a wider amount of space, their timing is pretty precise, and mastering a fighting style is more heavily reliant on counterattacks, mapped instead to the B button. Counterattacking at the right moment will trigger a deathly parry that also restores HP, which means its invaluable in tight spots. However, if you’re a bit too early on your input, you’ll miss your chance and lose more health, so this function works best when you’ve familiarized yourself thoroughly with your enemy, or when you’re being surrounded. 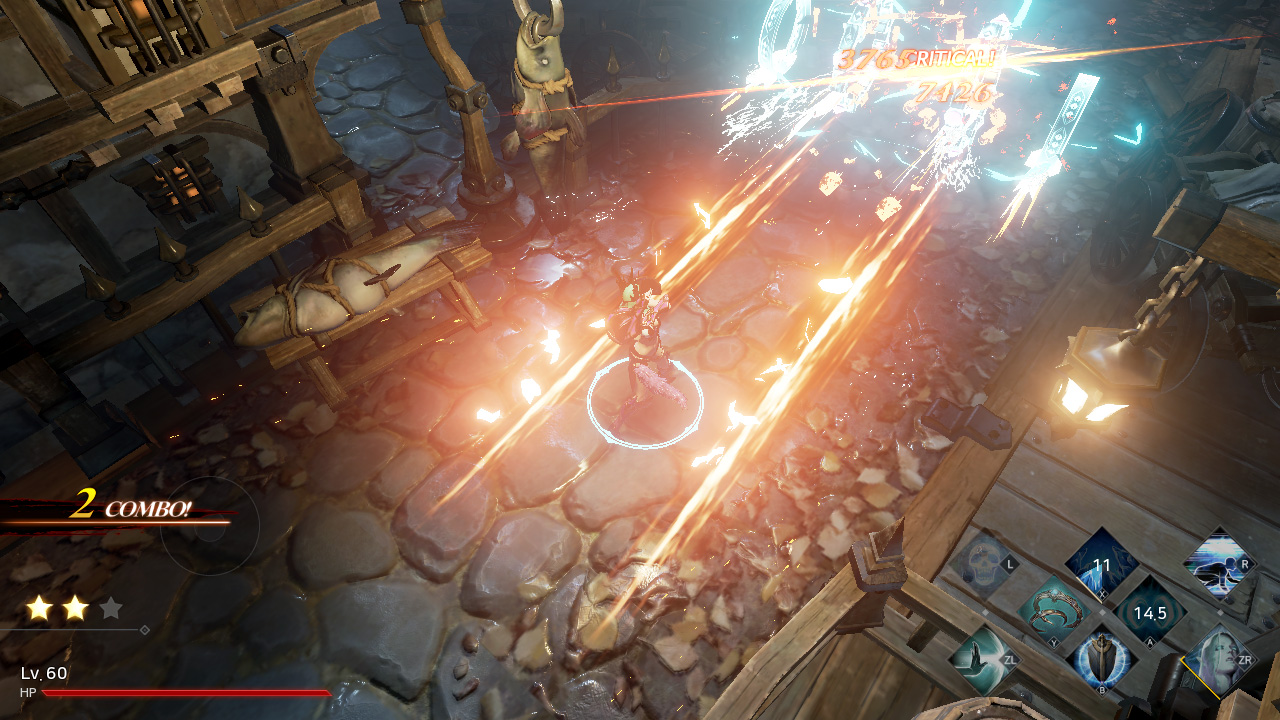 Aside from these skills, you’ll be able to perform an instant execution by pressing the L bumper by an enemy with a marker above their head, an offensive skill with A, defensive with X, an aura or buff skill with the L trigger, a dodge roll with the R bumper, and an Ultimate skill with the R trigger. Every button on the Switch controller has a purpose, including the Right D-Pad, which pulls up a list of stage objectives and their completion. One of the main features of the game is its objectives, optional limitations the player can impose upon themselves to make a stage more difficult. These often consist of a time limit and two more stage-specific objectives, like avoiding dodge rolls or finishing the stage with a certain amount of HP. While most that are time- or damage- based can be leveled into obscurity, those requiring limits on or a certain number of inputs are the most difficult, if only because Blade II often feels as though it has a bit of input lag.

At the end of each stage, you’ll have to fight a boss, a monster that is usually an upgraded version of something that appeared in the level poking its head out to play. These bosses have some attacks that will cause knockdown and heavy damage, and more than often, you’ll need to grind for the proper gear or experience in order to defeat them.

Despite its “deep” combat system, Blade II is an RPG, and you’ll accrue experience from defeating enemies and completing missions, as well as receive gear that will change your appearance and abilities. Playing dress-up is fun, but getting a set of gear with the same name is even more important, as a full set will offer numerous benefits- the higher the rank, of course. The way gear is ranked in Blade II is a bit of a conundrum that can only be solved by the title’s own tutorial screens that flash every two seconds on the loading screen, but there’s an order to things. It’s likely that getting a higher-star rank increases the chance of getting better gear, but I never saw a marked effect on the way that loot was distributed. 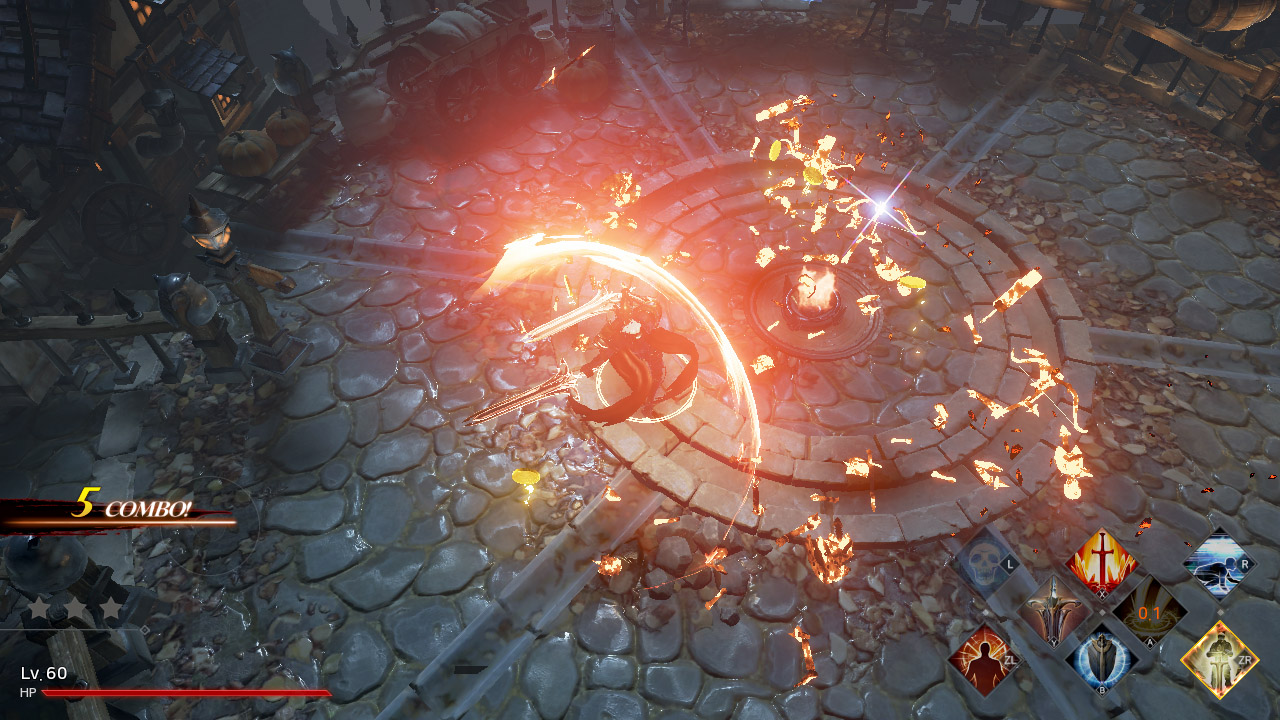 If you’re still struggling, the game’s second act (of seven, don’t worry) offers rift battles, where you’re able to take on one titanic enemy with their own titanic health bar. If smacking around tons of disposable mooks isn’t your cup of tea, than this intense one-on-one with a monstrous individual might be more up your alley. Although rifts usually open based on the completion of very specific levels- likely so that their difficulty scales with what you’re currently facing- they range from wacky scorpion women to ice dragons, and they are extremely fun. They’re also some of the few enemies in the game whose attack range is telegraphed, which makes them all the more exciting to fight considering you know what areas of the arena you can utilize to avoid damage. There’s also the Hero’s Tower, which offers a test of endurance for some additional experience.

I’ll say one thing first- like Animus, Blade II has some stellar visuals, though they clearly outclass the former in a number of respects. Yes, most of its creatures aren’t anything you haven’t seen before, but they are wonderfully designed, and that goes double for all of the unique characters. The playable cast is truly epic, though the ladies are a bit bare in their ensemble. Not that the men aren’t studs, themselves- the warrior is toting a white beard despite being a youthful individual, and the Akuma-esque fighter is giving off burly vibes. But there’s a great deal of sexualization in all of these humanoid characters, and it’s up to the individual to evaluate whether or not that is bearable. 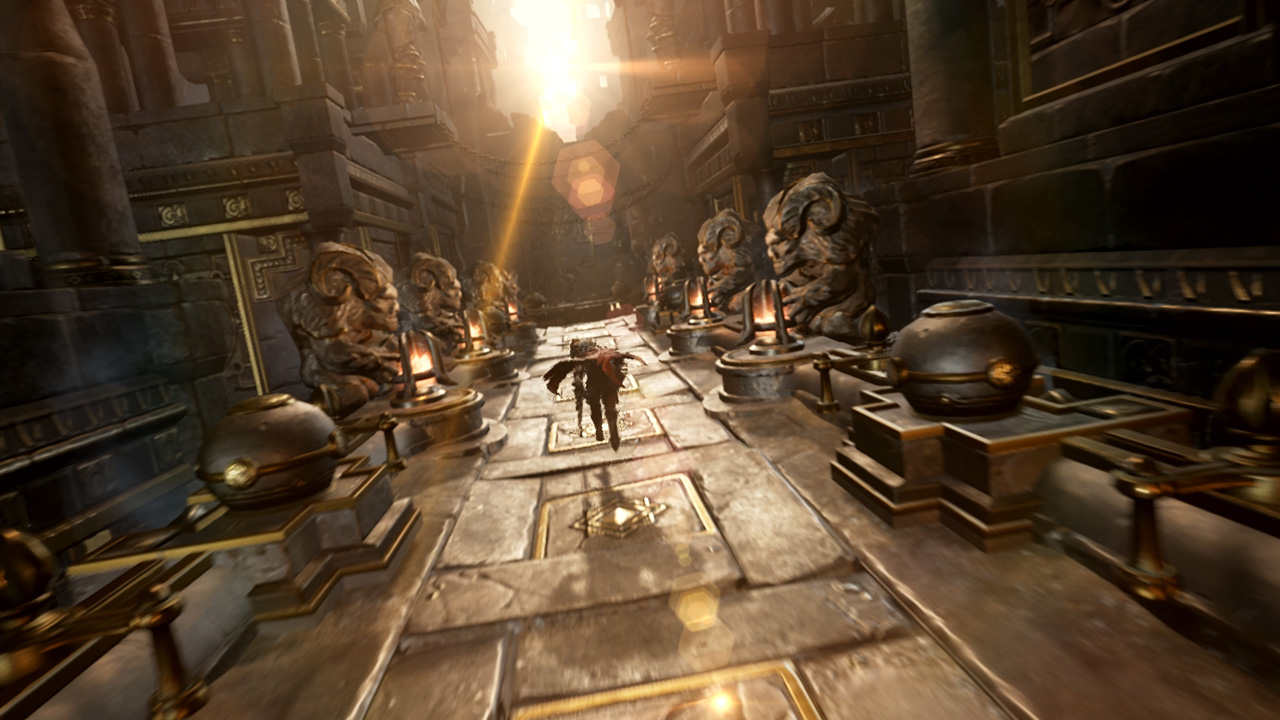 It’s not as though you’re going to see much of these characters outside of in-game cutscenes, however- the camera is usually panned out far from models during gameplay, and the lighting of most levels- even if during the daytime, doesn’t help them stick out much. It’s the particle effects, and elemental attributes of character animations, that help distinguish one character from another. Likewise, although the environments are equally as detailed and gorgeous, these details are lost in a camera that is often jerky and darting all over the place, which is unfortunate.

Things don’t get much better in the audio department. The dialogue is understandably Korean, but the voice acting for the playable characters is set much higher than any other audio in the game, resulting in crackle and the need to lower your television audio. The in-game audio options allow the modification of music and effects, but neither seems to have any effect on the playable character audio. The music itself is grim and epic, giving Blade II a proper “return of evil” feeling, but outside of fitting the mood and aesthetic, there’s nothing particularly iconic about its tracks, just that they mesh with the overall experience. 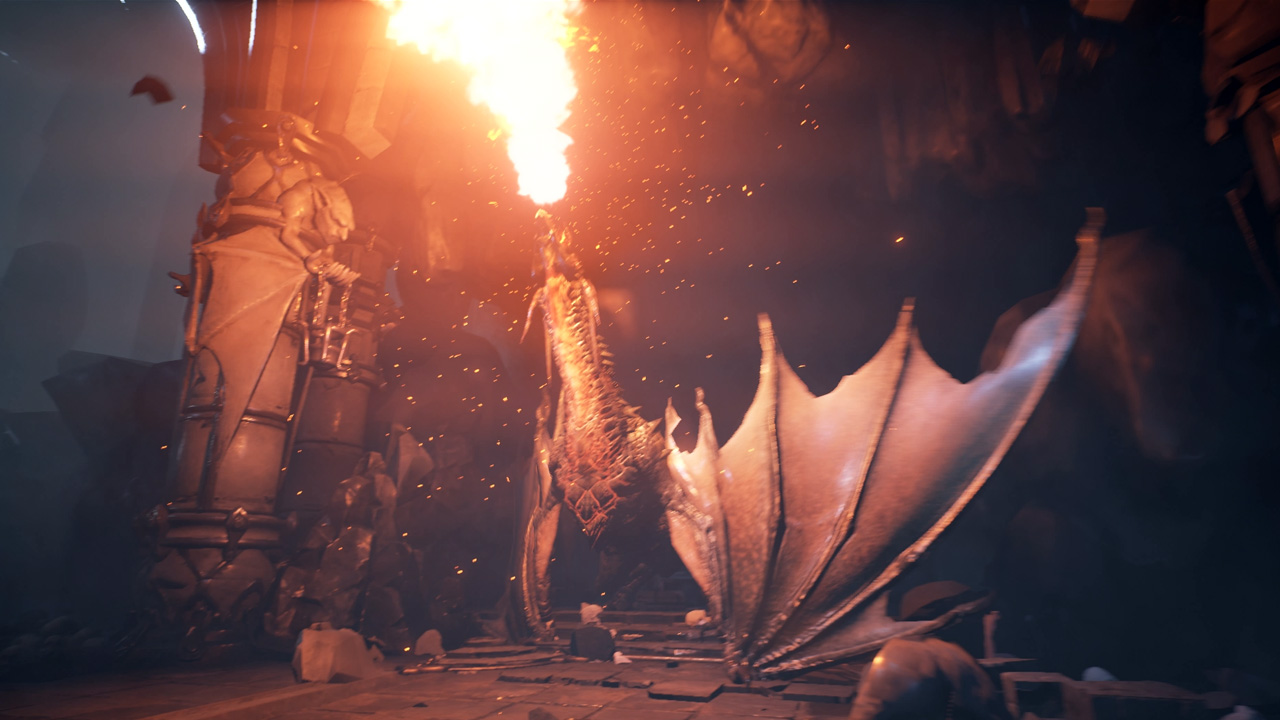 The narrative, which is accompanied by gorgeous cinematic cutscenes at specific points, is more or less your typical ancient evil affair, though Blade II gets points for having quirky and iconic characters that appear in each act. You’ll meet adorable pixies with character-rich animations, spooky specters of the good and evil kind, and plenty of strong, pretty men in armor. The mission-based structure of the game means that, no matter what, when you’ve punched your way through a boss, the story is going to go in a new direction, and you’re going to be turned in the direction of a new boss to punch. In other words, Blade II is an ARPG- you’re punching from place to place, and you can’t put much stock in characters introduced at the beginning of a ten-level act who is corrupted by level four.

If you’re looking for visceral combat and plenty of mindless action, Blade II has this in spades. You could grind your way through its missions without caring much about the optional objectives, though that will take you longer and will be much less optimized. Though its auto-targeting attack combinations may seem sloppy and optimized for mobile play, they make the more difficult objectives all the more challenging, and there is a mastery that exists underneath the flashy animations, spammable skills, and shiny coat of paint. 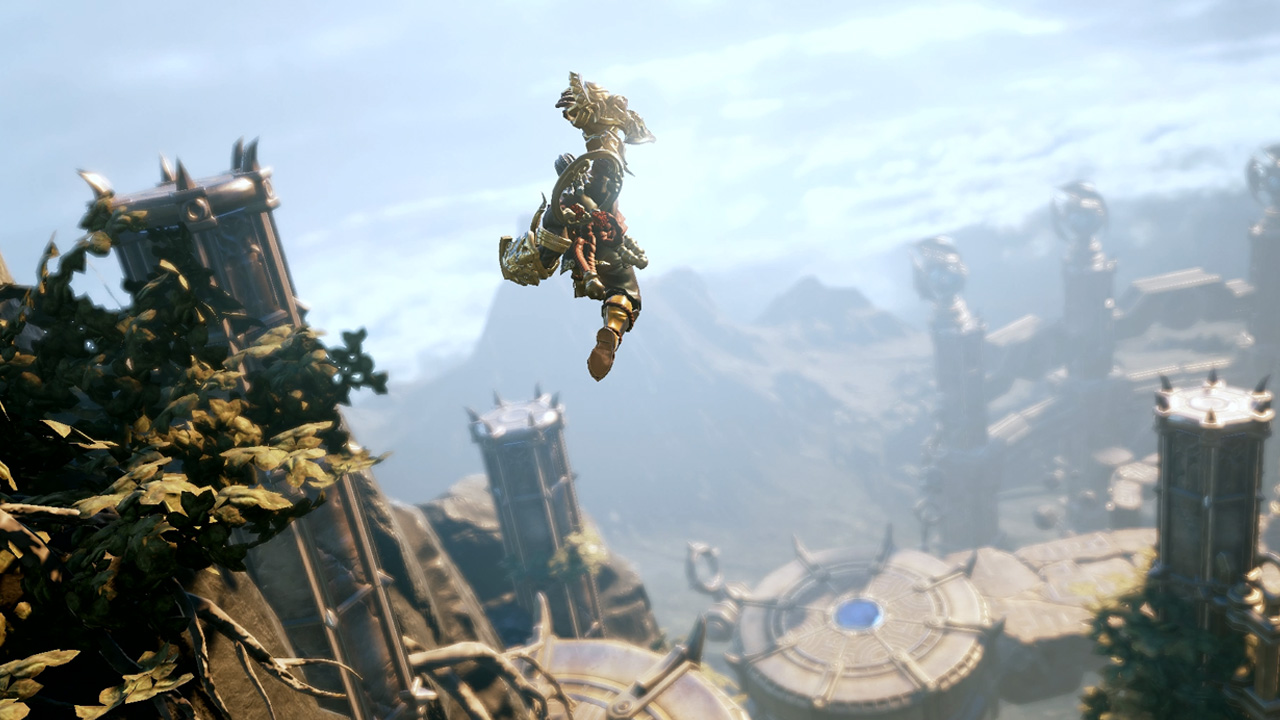 If you’re looking for the intimate dance of blades, rift battles are also extremely exciting and rewarding in a completely different kind of way. Sure, you’re not playing with the most iconic character designs or music, but there’s still a great deal of personality in the way these attacks connect. Plus, there’s a whopping three difficulty modes that make the entire experience well-worth your investment, as the grind only gets more intense, along with enemy encounters.

The main problem here is that Blade II has some pretty glaring performance issues. Inconsistent audio, frame drops when the action and animations become too much (that’s in handheld OR docked mode), and some truly bizarre slowdown issues on a system-wide scope. The longer you play Blade II, the longer it will take for you to be able to pull up the home menu. The game clearly doesn’t want the player to stop, and if you like what Blade II has to offer, that might not be a problem. If you turn down the volume, kick back, and dedicate yourself to smacking around some skeletons, you’ll find Blade II to be a heck of a good time. But if any of what’s been said throughout this review is a turnoff, well, there are other isometric ARPGs out there. Blade II isn’t the best, but it does offer some worthwhile charms.