Step into your local hipster clothing shop and you’re bound to see Bendy and the Ink Machine merchandise. It’s hard to miss the cartoon face, pointy ears and corny grin of the now cultural icon, Bendy. The success of Bendy and the Ink Machine is both a testament to how well the developer Rooster Teeth navigated the modern viral marketing landscape as well as its ability to appeal to gamers of any age. There is no doubt that at least some of the game’s commercial success is a direct result of the many YouTubers that covered the game on their respective channels.

Although somewhat light on traditional RPG elements, Bendy certainly manages to use its unique characters to tell an original, albeit dark, story that almost anyone can enjoy. Being a dad myself, I noticed my children’s obsession with the Bendy coverage and decided to give the game a try when it received its physical release on the Switch. 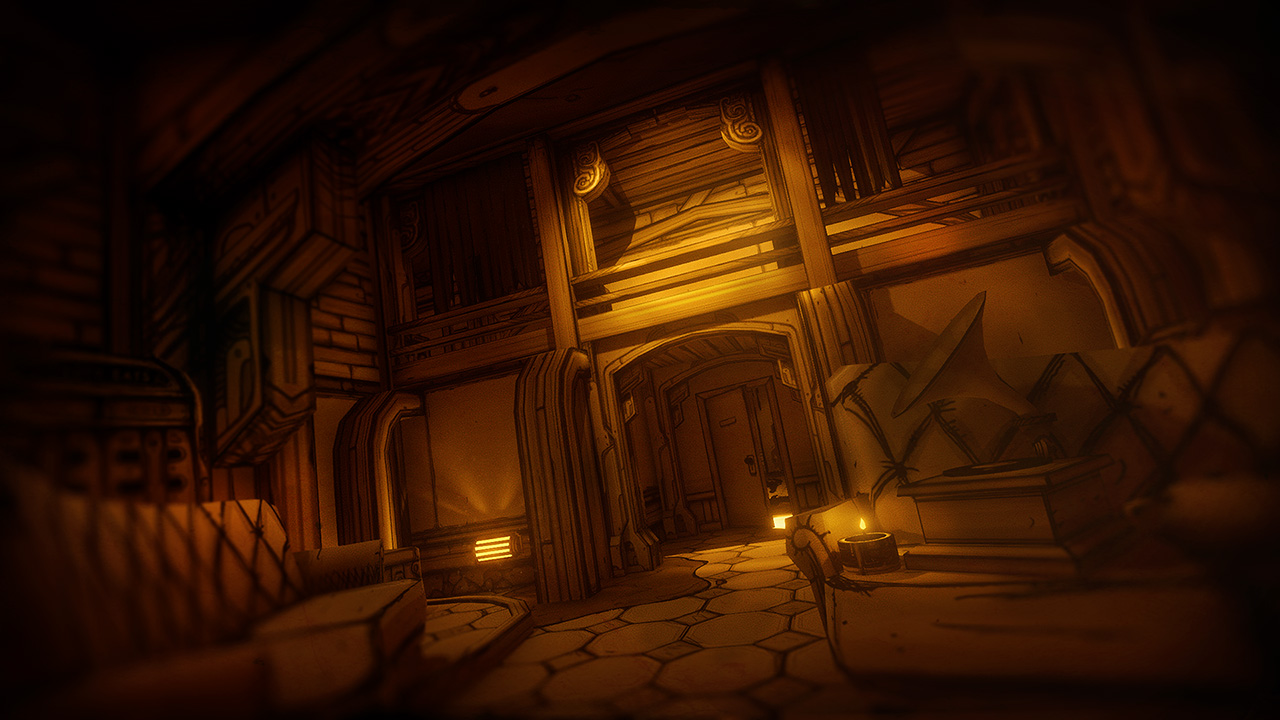 The gameplay, atmosphere and overall vibe of Bendy and the Ink Machine is a direct throwback to the greatest ideas that were brought to us by Bioshock over a decade ago. You play as Henry, a lead designer for 1930s era cartoon studio Joey Drew Studios. The player controls Henry from a first person perspective and combat is completely melee based. Henry’s Arsenal is extremely limited and is only designed to provide the player with just enough to advance the story. Upon finding a weapon, the rest of the formula is as simple as picking the weapon up with one button and swinging it with the other. Unfortunately, the Switch version faces a few inconvenient bugs, and one in particular made it extremely difficult to damage an enemy when they were in contact with an ally. This was a major hindrance in the last 2 chapters of the game especially when Henry receives the most help from allies.

The rest of the gameplay is about 8 hours worth of fetch quests with some very necessary stealth scenarios mixed in. Bendy and the Ink Machine does an outstanding job of creating a tense and creepy atmosphere that is, once again, very similar to Bioshock. There are enemies that are simply too powerful to fight, and your only option is to hide, and hide quickly. This is where the game keeps you hooked as you’ll find yourself excited for the next scare and/or hurrying along to find answers to the next plot twist. 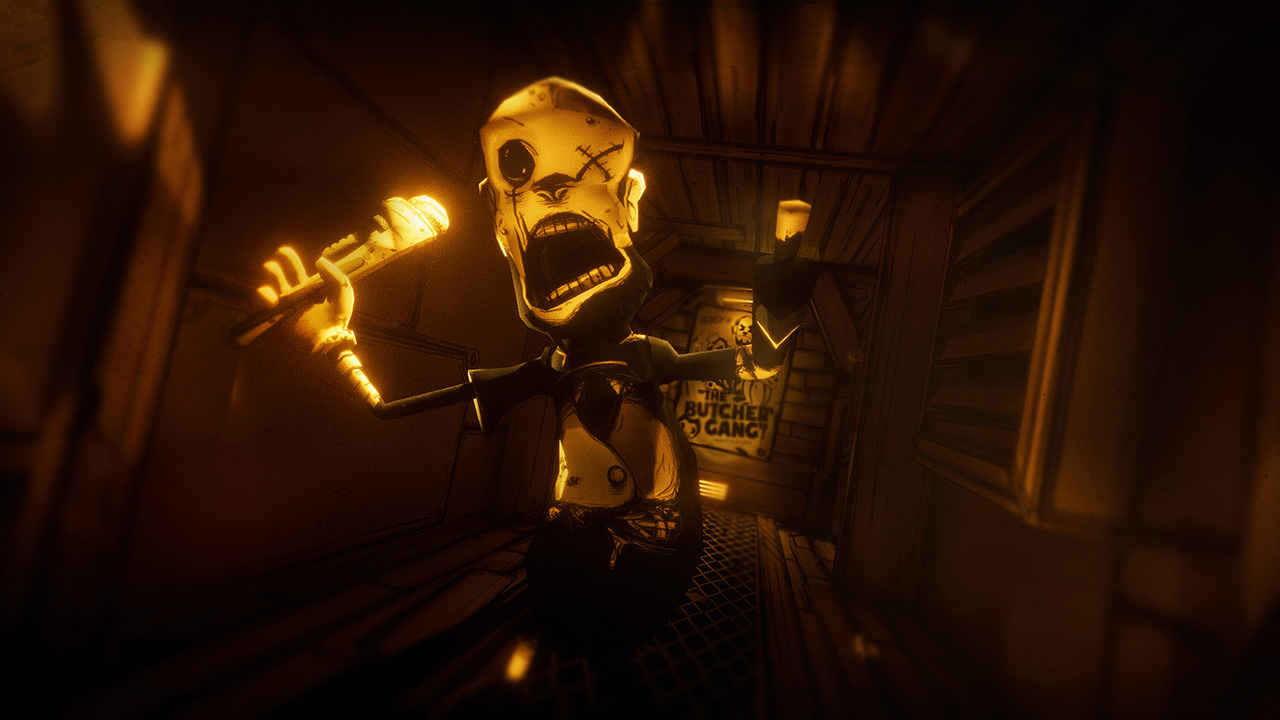 What if Cuphead and Bioshock had a baby? Bendy and the Ink Machine would be the end result. The cartoon character type designs are very similar to the early era cartoon designs of Cuphead and the world of the Ink Machine could very well be Rapture with Ink instead of water with some added saturated, sepia-toned visuals. It’s simple and it’s blatant but hey, it works.

The story even progresses with random sound bites from tape recorders in yet another blatant homage to Bioshock. The cassettes offer tips on how to complete certain quests as well as some tidbits of information about the characters that currently (or previously) inhabited the studio and the Machine. There is some text provided if you have trouble understanding the appropriate sounding accents from the 30s era. Good luck trying to read it however, as the font is incredibly small in both mobile and docked modes of play. 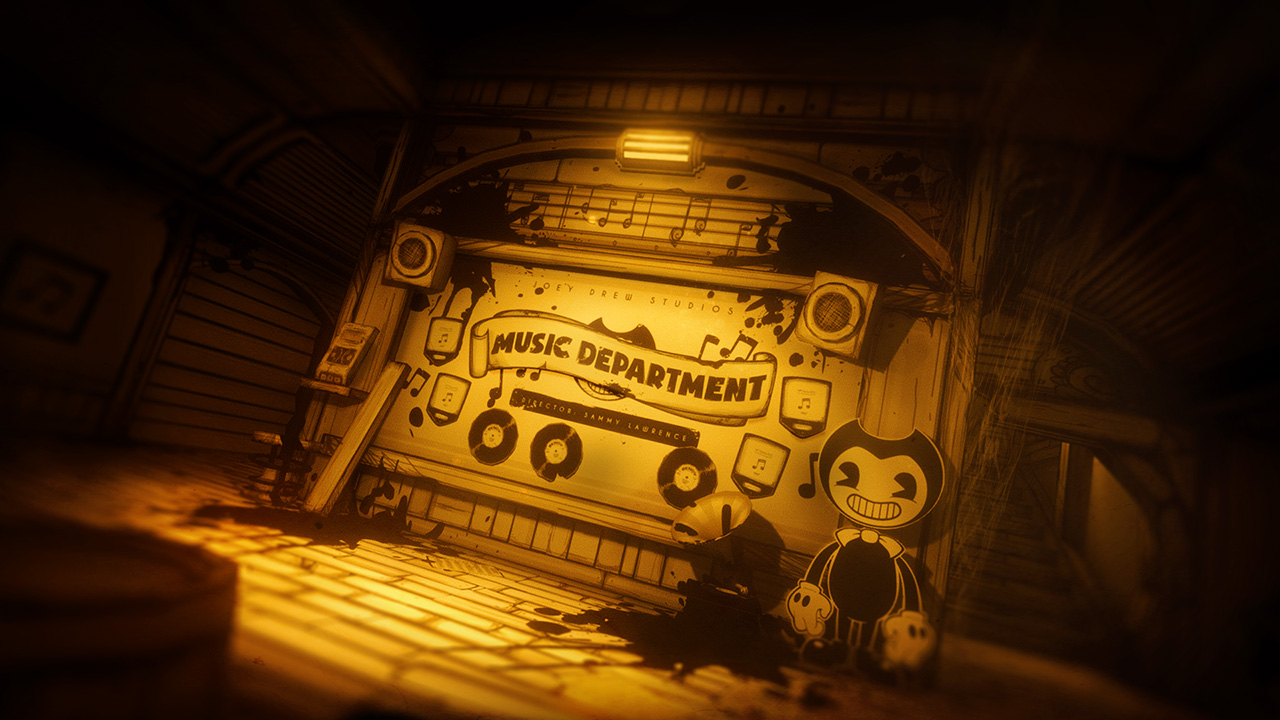 It’s easy to understand why Bendy and the Ink Machine has reached such cult levels of success with its creepy and addicting story that is very tactically laid out within chapters. The ending of each chapter leaves you buzzing with anticipation for the next one. The gameplay is simple and fluid enough, although this Switch version clearly has a couple of bugs. The biggest selling point for the game for me is the price point, as the physical release will only cost you $29.

The game will only provide you with about 8 or 10 hours of content but you’re still paying half of the price compared to most physical copies of Switch games. If you have played Bioshock, this game is truly going to amaze you with its similarities to the iconic game. It does tend to go overboard with the call backs at times, but there are certainly worse games that Rooster Teeth could’ve ripped off.

At the end of the day there is something to appreciate about a game that makes it feel OK for kids to play through a creepy story. Bendy and the Ink Machine manages to provide “PG-13 horror” in a game that I’ve never seen done before previously. If you’re in search of a game that you can play with the kids that isn’t within the realm of a party game or a fighter, Bendy could very well be the story for you, if you can get past the very obvious Bioshock comparisons and the couple of irritating bugs within.

Tags: Bendy and the Ink Machine