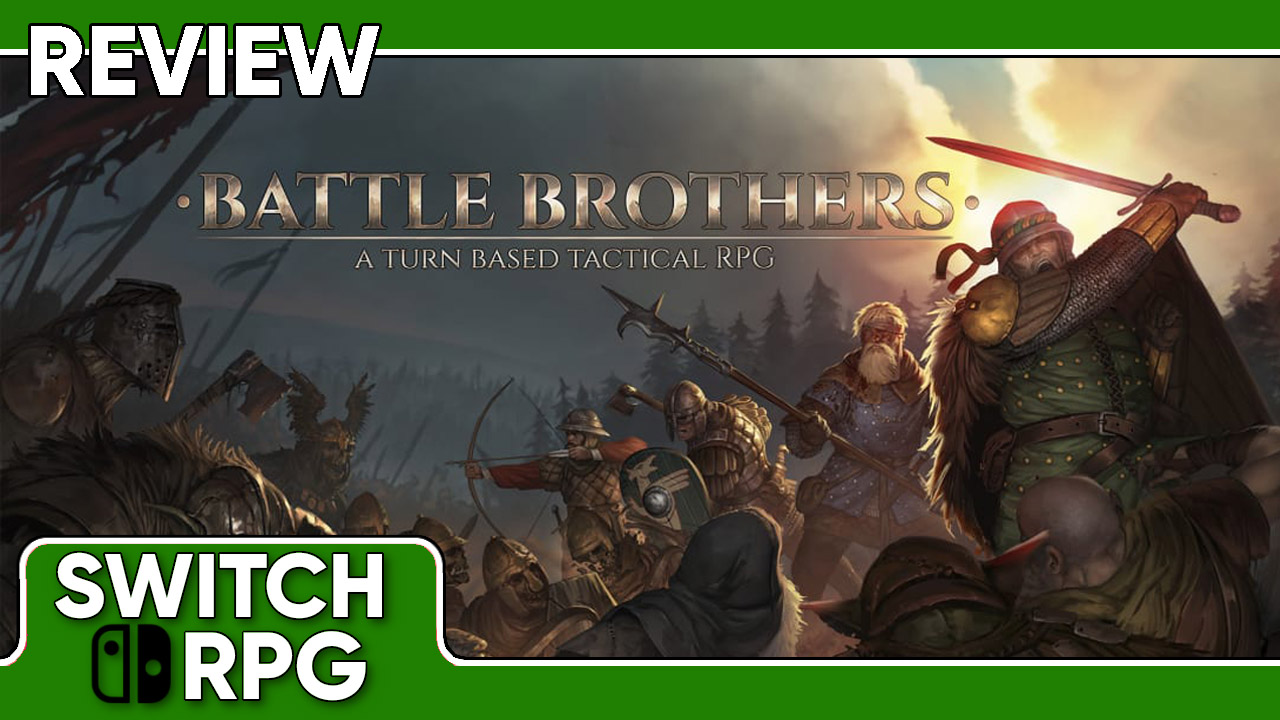 I wanted to care about Wolfgang. I really did. He was an honest farmer whose livelihood was taken by war. He had a cool name and cool straw hat. He had good stats. But he also looked exactly like Meinrad and Wernhard. And a little like Siegfried. And by the time I was done equipping them, they all had the same spear, shield, and chainmail. So when he died unceremoniously at the hands of a nameless brigand, I tried to care. But he died so fast, and he looked so much like everyone else, and he was so easily replaced, that I forgot about Wernhard. Or was it Wolfgang? 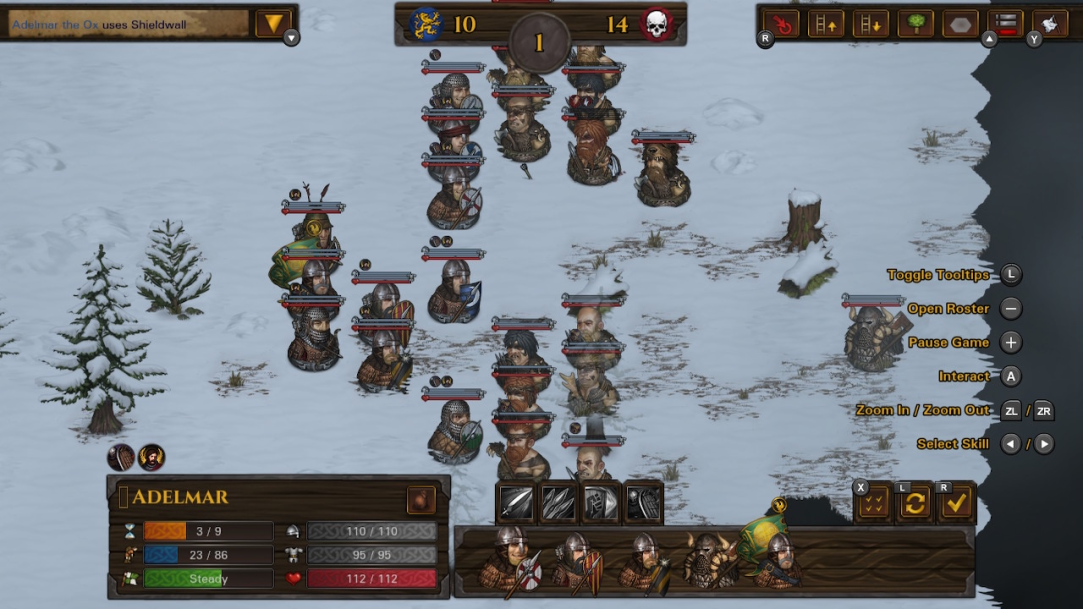 So much of my time with this game was spent trying to care, trying to find things about it to like, but consistently coming up empty. The saving grace is its brilliant tactical gameplay, as addictive and deep as any strategy game. The rest of the game is mired in frustrating controls and ugly visuals, making it hard to recommend to any but the most hardcore Tactical RPG fans.

The Illusion of Freedom

Battle Brothers is an open-world, turn-based Tactical RPG. There’s no overarching story, but the game starts with a scripted battle that decimates your mercenary group. Your commander is dead, and your once-proud band of mercenaries is down to three. You’re tasked with rebuilding the company and getting revenge by hunting down Hoggart the Weasel, the spineless brigand responsible. After avenging my fallen leader, I was excited to build the mercenary band of my dreams, at my own pace, in my own way. I named my motley crew The Merchants of Venice. I knew there wouldn’t be a main story, so I was ready to write my own.

We had lofty ambitions of becoming a professional trading company. We wandered from town to town, buying goods from local markets and recruiting farmers to join the company. Eventually, I was confident enough to undertake a 4-day-long caravan escort contract, the game’s version of “quests.”

Little did I know, by recruiting too many people and spending too much time without fighting, a bevy of hidden mechanics were working against me. Our caravan got ambushed by heavily armored barbarian reavers, and just like that, The Merchants of Venice were no more. 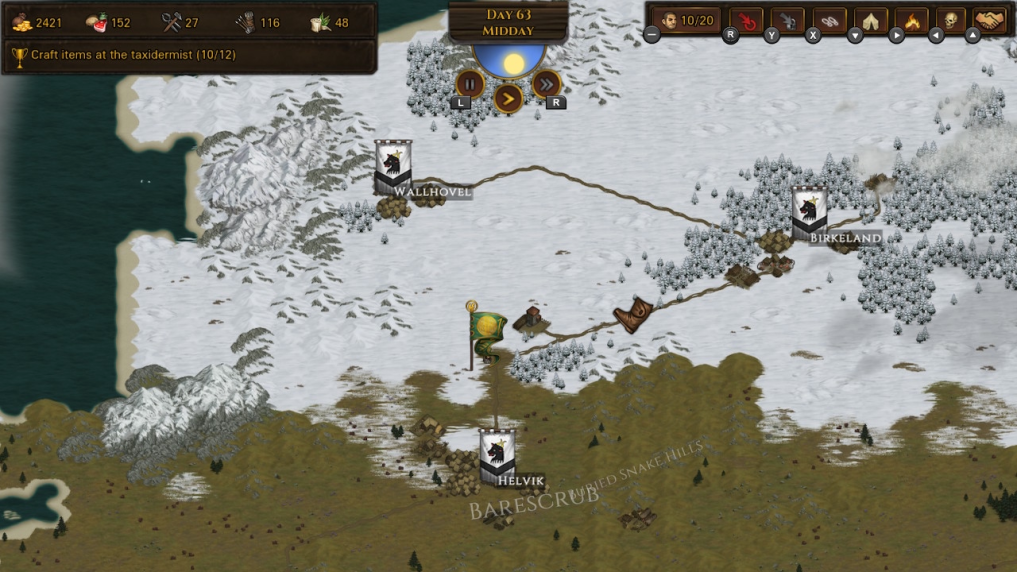 I tried again. To inject some personality into my teams, I started naming them after funny dog toys I saw scattered around my living room. The Band of the Hedgehog was killed by poisonous spiders. The Band of the Turkey got slaughtered by marauding skeletons. And the Band of the Pig was felled by an angry pack of dire wolves.

After deep dives into various wikis, it became clear that the freedom of Battle Brothers is an illusion. There’s only one very specific way to play Battle Brothers. If you deviate from the hidden, pre-established format in the slightest, you fall behind the brutal difficulty curve and will find yourself being chopped down by hordes of more powerful enemies. As a result, you can’t “write your own story.”

Since there’s no main story either, any storytelling would have had to come through quests. These take the form of contracts in Battle Brothers. Every contract starts with a scripted interaction with some noble or local merchant. There’s no voice acting, but the high-quality writing makes up for that. “Men holler and scream, a great volume before death,” read one prompt after a battle. A local doctor once cauterized a wound, triggering this text: “You’re not a man, but a pinch of fire, flesh from flame, a golem of pain.” 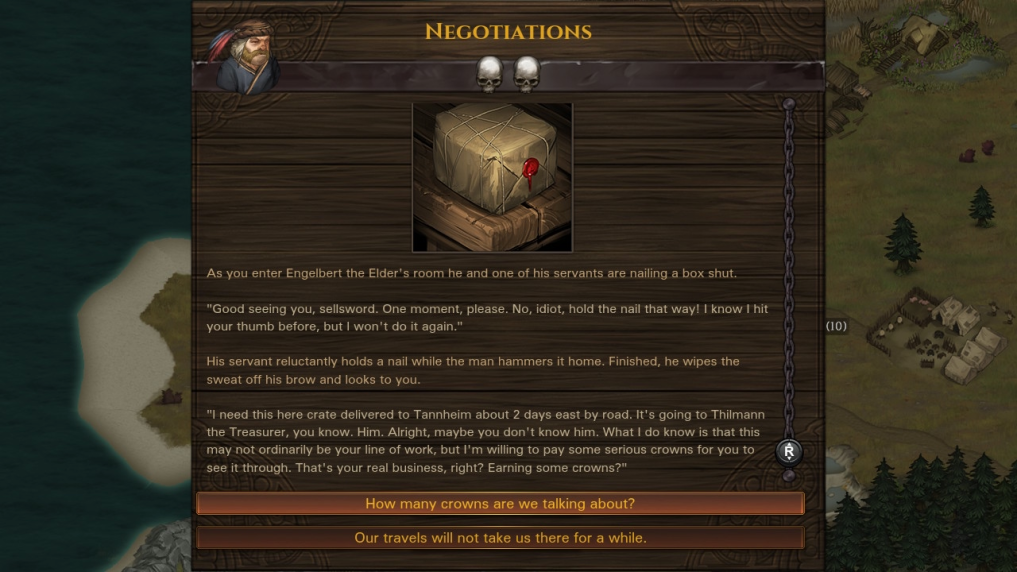 Unfortunately, this text is rarely worth reading because the quests boil down to only a few kinds: fetch this, deliver that, or kill them. Sure, there’s variety within those. Sometimes you have to hunt down a necromancer controlling an army of undead, or you have to eliminate a barbarian king and his warhost. But with the sheer number of contracts you have to take to keep up with the difficult curve, I found myself merely skimming the text. The quality of the writing doesn’t matter if you have no reason to read it.

It would have helped if I had an in-game avatar who could lead the Band of the Grilled Cheese. That would have given me some reason to care. I could project personality onto them, imagine the kind of leader he’d be, and give him a back story. Instead, you’re an invisible, nameless commander with no raison d’être, no goal, and no end in sight until you die or decide to retire.

Battle Brothers has two types of gameplay: the world map, where you roam from town to town, taking contracts, buying new armor, and hiring mercenaries; and battles, which are hyper-tactical, hyper-violent affairs that take place on a chess-like grid. Both areas are fraught with peril, where one bad decision can lead to ruin. If you don’t buy enough food, or you don’t manage your budget correctly, your men will quickly desert. And if you misjudge your position in battle, your shield wall will collapse and your best soldiers — along with their gear — will be gone, permanently.

These high stakes make for tense and thrilling encounters, even though they’re slow and entirely turn-based. Every move and attack is hugely consequential, because even on Beginner difficulty, the game is unforgiving and provides little guidance. The first time I got through a battle without losing a man was a triumph. As I got better and pulled off harder combat techniques — like coordinated spear walls and perfectly timed mid-battle weapon swaps — I started to feel like some sort of medieval chess grandmaster. 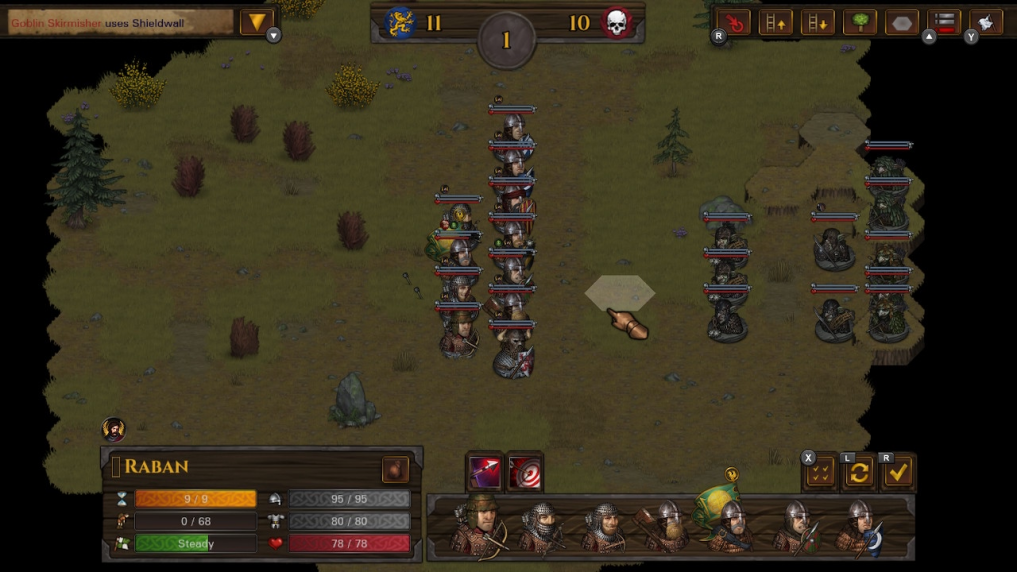 Unfortunately, that tactical brilliance is stymied by awful controls. In every facet of the game, it’s practically begging to be played with a mouse and keyboard. Instead, you have to manually move a cursor using joysticks. Some very minor additions, like auto-selecting the nearest enemy, would have been a drastic improvement. If you can overlook the controls, however, the combat is addictive, satisfying, and deep.

It May Hurt Your Eyes

I’ve played my fair share of indie games, and bad graphics are low on my list of things to care about. Unfortunately, Battle Brothers doesn’t just have bad graphics. It has actively creepy graphics. The people all look like grotesque chess pieces. In my 40+ hours with the game, I never got used to that. 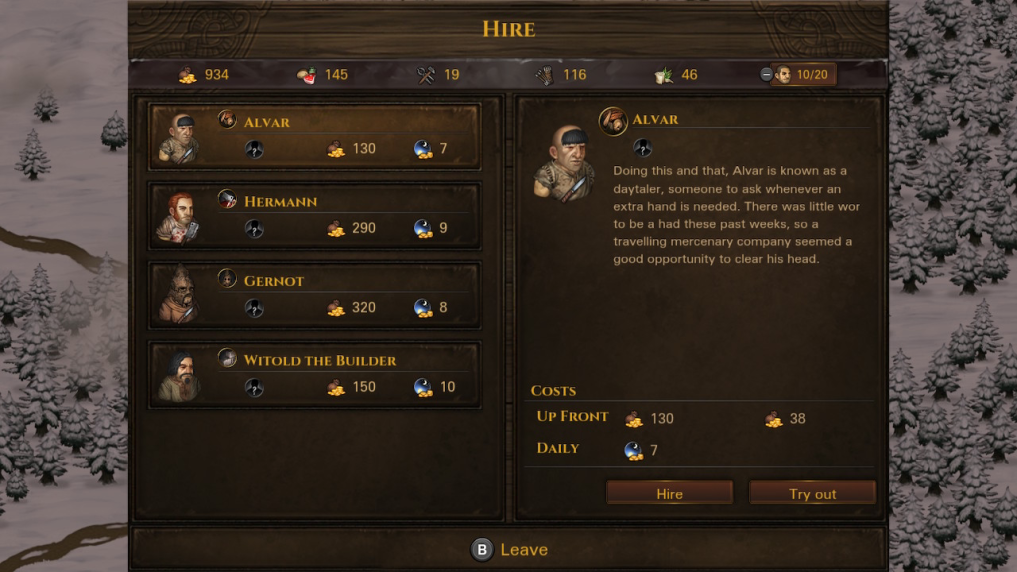 Even with the simplistic graphics, Battle Brothers still suffers from several glaring performance issues. Chief among these is a glitch that cuts off the end of text boxes. Presumably this is a Switch-specific problem, but it’s just another reminder that this is a deeply flawed Switch port. Game crashes are frequent as well. Thankfully, auto-save meant I never lost progress — only time. It takes several minutes for the game to load, and several more for the actual save file to boot up. Once the game’s running, however, load times are snappy.

The on-board animations are smooth, and while strange to get used to (the pieces just slide around and ram into each other), every attack feels solid and sounds satisfying. The game is “realistic” with its hit percentages (anything above 70% is excellent), so every time you do hit, it feels like you earned it.

While the animation is the same for every weapon type, the sound effects are distinct, and they’re all satisfying. Without any animation, spear thrusts sound like spear thrusts and crossbow bolts sound like crossbow bolts. The kill sound effects are gruesome without being gratuitous. Even the clangs when you hit a shield or the whiff when you miss are excellent. The music adds to the atmosphere with heart-thumping battle themes that change based on the locale and enemy type. Battles against barbarians in the snowy north feature suitably epic chanting, and fights with necromancers in an ancient cemetery feel appropriately chilling. Taken together, the soundscape of Battle Brothers is a strong point.

Battle Brothers left me numb and annoyed. It never gave me a reason to care about its world or my cast of bland, interchangeable mercenaries. The game’s controls are awful. The visuals are frightening. The game crashes and has long load times. But underneath it all, you’ll find some of the finest tactical gameplay the Switch has to offer.

Podcast and video game connoisseur. Creator of Let's Listen and vanquisher of Galdera.