Bastion, Supergiant Games’ inaugural hit indie action RPG took the world by storm back when it first launched in 2011. However, at that time my mistress, World of Warcraft, would not loosen its grip enough for me to enjoy games as beloved as this one – until now. While I may be late to the party, the form factor and capabilities of the Switch has provided a means for me to jump back in and experience all sorts of games that I otherwise would have never played. Time to find out if Bastion is worthy of all its praise.

After an event known as the Calamity decimates the world – leaving only floating mounds of rubble in its wake – a young boy known simply as “The Kid” wakes up from his slumber. He grabs his trusty hammer and sets off for the Bastion, a stronghold designed specifically to shelter those who have managed to survive the Calamity’s fallout. One might hope to be greeted by many at the Bastion, but alas, the place is a ghost town outside of Rucks – an elderly man and narrator of the story.

Rucks explains to The Kid that their only hope to bring the Bastion alive would be to collect the cores that once powered the fallen city, Caeldonia, scattered about the torn landscape, only accessible through the skyway. These cores unlock the true potential of the Bastion, increasing its size and offerings with every core placed within its heart. And who knows – perhaps there are others out there that are waiting to be saved, but the million dollar question is this: what caused the Calamity in the first place? 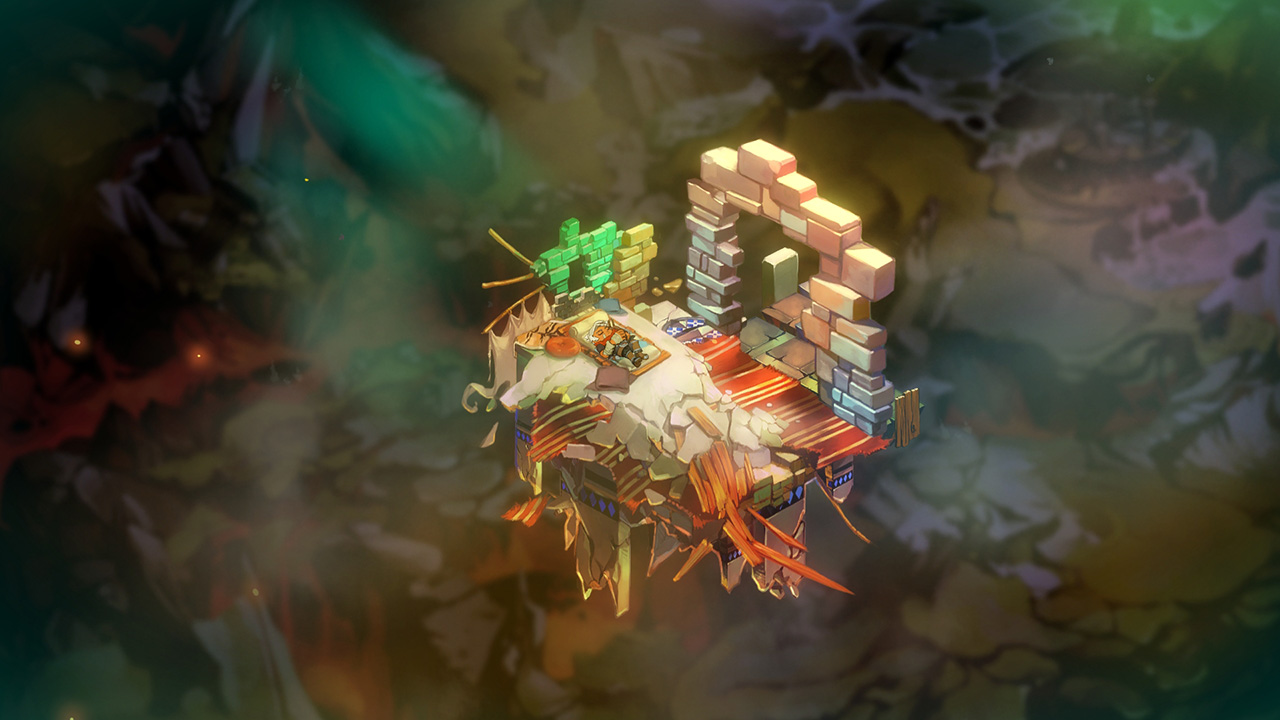 Bastion is quite unique in its storytelling as it does so through detailing the exploits of The Kid dynamically through the narrator, Rucks. From the moment the journey begins – with the narrated “he gets up” – to the very end, Rucks will share the deeds of The Kid in real-time and in raw detail. It is a form of storytelling unlike anything I’ve ever experienced before in a game. As novel as the idea is though, it does not come without a few caveats.

Because of the action RPG nature of Bastion, and the fact that Rucks narrates on the fly, it is very easy to miss strings of story amidst the heat of battle. Additionally, since these remarks are delivered based on what is happening in real-time, you can’t always easily stop, take in the dialogue, and then go back on your merry way. It is quite an unfortunate situation since the story is intriguing and the voice acting is great – especially for an indie game – but its innate design inhibits your ability to take in the narrative in full effect.

Bastion is an isometric action RPG set in a post-apocalyptic world. The Kid is tasked with retrieving cores and shards to bolster the Bastion’s capabilities, but such a task isn’t cut and dry. Dangers lurk around every corner of this scarred, drifting world, so The Kid must be equipped for the job. Starting out with just a hammer, he will eventually come across all sorts of weaponry, including swords, spears, bombs, and various ranged goodies. Each of these weapon types have their own pros and cons – some might be faster than others but deal less damage while others might have a range advantage (even amongst melee weapons). On top of their base perks, each weapon can be upgraded multiple times to further increase their power. 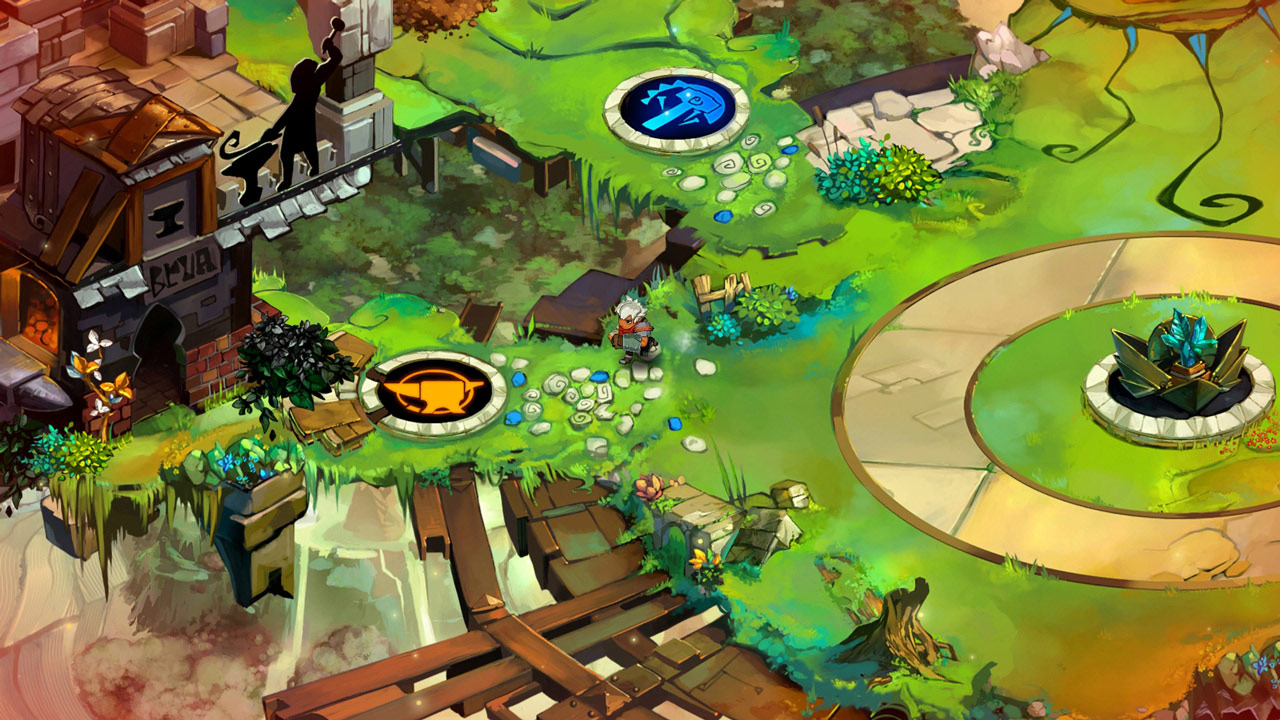 While the variety of weapons is welcome, their method of acquisition can be a bit bothersome. Whenever you pick up a new weapon out in the field, you are stuck with it until you can swap it out at an Arsenal. Admittedly these weapons are generally quite useful in the areas that they are obtained, but if you have grown fond of other weapons already, it can be a bit of an annoyance when you’re forced to use other ones temporarily. The Kid can only equip two weapons and a special power at any given time. As you squash enemies, you will gain experience and level up, opening up slots at the distillery that allow The Kid to equip brews, granting him various bonus traits. The weapon system and distillery pave way for a decent level of customization that never feels set in stone.

Beyond the the main campaign, Bastion offers a dose of side content in the form of Proving Grounds and Who Knows Where. Proving Grounds open up as you unlock more weapons, and provides a set of challenges specific to that weapon, giving you rewards based on your performance. There are three tiers of rewards, and the Proving Grounds themselves can be tackled an infinite number of times in order to receive them all. Who Knows Where sends The Kid into an alternate dimension that has him face off against hordes of enemies while the narrator divulges some of the game’s backstory. Again, neither of these forms of content are mandatory, but can provide ample rewards and additional context for those that seek them out. 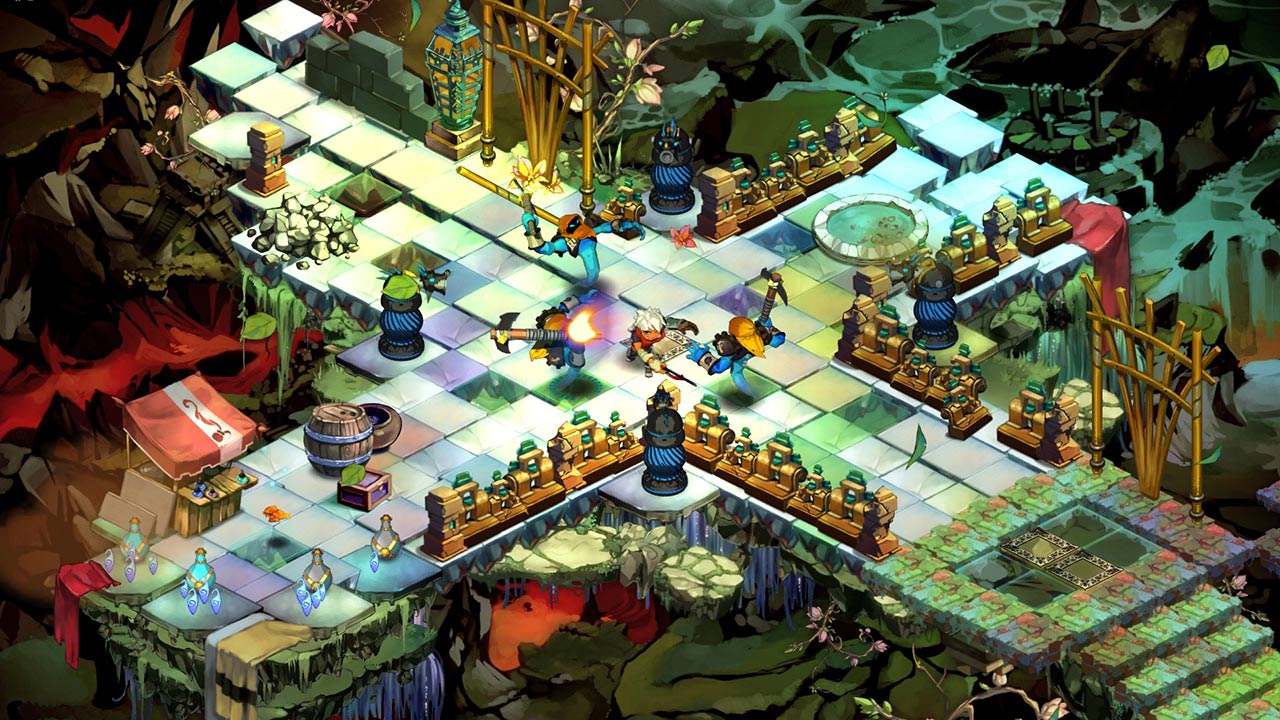 Bastion offers several levels of difficulty that, together, cater to all types of players. The base level is likely to be a bit easy for the average ARPG consumer, but this can easily be offset by the Shrine found within the Bastion. Here you can fine-tune the prowess of your foes by toggling various idols, which will progressively increase the difficulty – and rewards – of combat.

This fine-tuning allows for a more steady sense of progressive challenge rather than the huge spike often associated with simply moving from “normal” to “hard” in other games. On top of that, a No-Sweat mode allows an avenue for people that just want to take Bastion’s scenic route, eliminating obstacles altogether. Either way, Bastion isn’t a very lengthy affair, with my personal playthrough clocking in well under 10 hours. However, the game does incentivize multiple runs through branched endings, as well as new game plus/score attack modes, though the former is only marginally accurate. 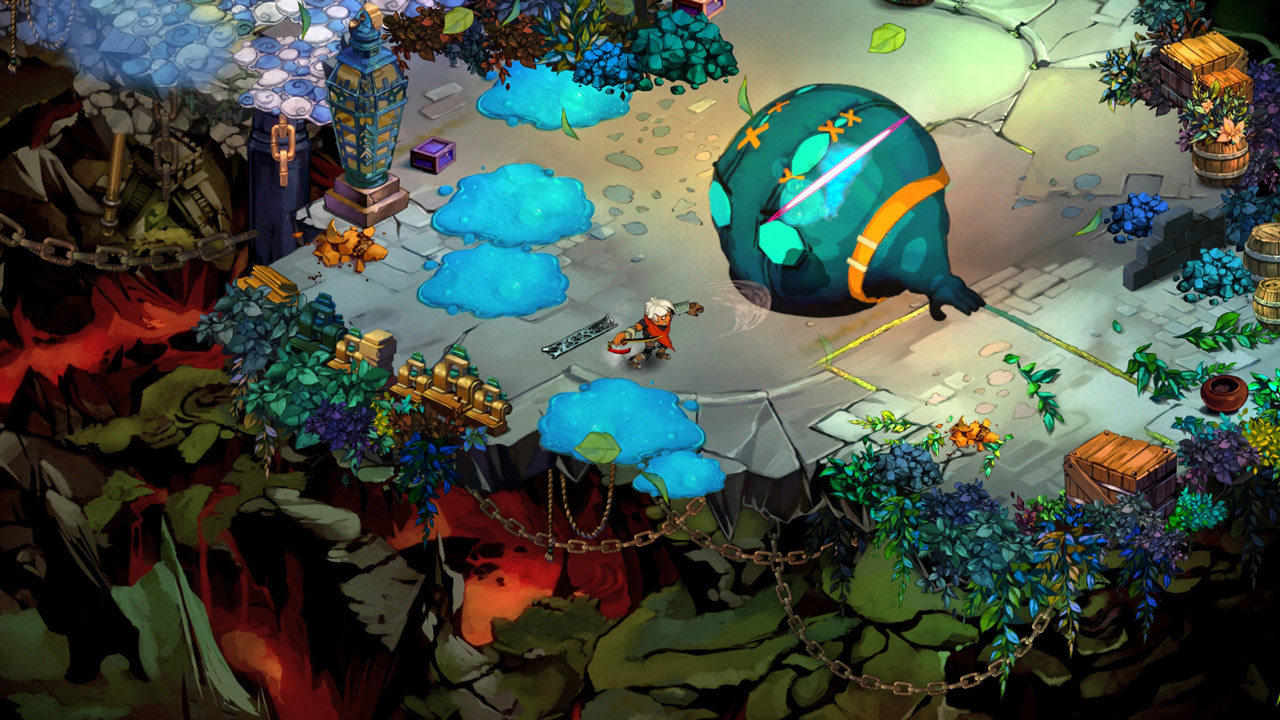 Both Bastion’s aesthetic and sound design are truly works of art. The hand-painted visuals that literally spring in and out of existence on a whim are a real treat to behold. The soundtrack further conveys the “acoustic frontier hip hop” feel – appropriately described by the the composer himself – for a world seeping with futuristic, post-apocalyptic “Wild West” vibes. There are even a few songs with vocal sections (something of which I usually loathe) that I really enjoyed here.

Bastion runs at a fairly consistent 60FPS in both docked and handheld mode, though I did experience some sporadic framerate hiccups along the way. Oddly enough, the amount of particles and/or enemies on screen didn’t seem to correlate to these performance issues – it was more random than anything. When they did happen though, it was only for a few seconds and minimally hindered the flow of the game.

What Bastion set out to do years ago still holds up well today, although the unique storytelling approach, in many ways, does more harm than good. It is still breathtaking from a visual and aural standpoint, but the dynamic narration often gets in the way of the core of the game – that being the action combat – despite being delivered through excellent voice acting. It is also a bit on the short side, catering more towards the completionist rather than the those of the “one and done” mindset – your mileage may vary. Regardless, Bastion remains an enjoyable ride, one that is certainly worthy of your time.