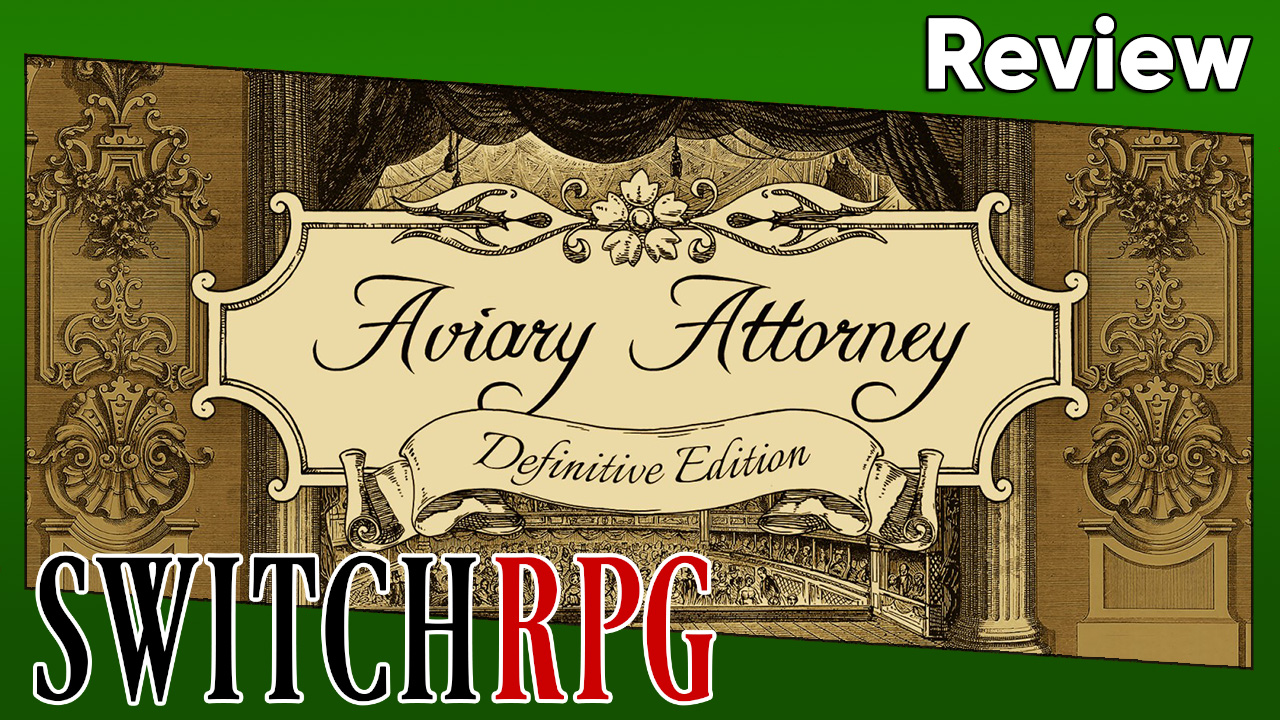 Aviary Attorney is set in nineteenth-century France, which was immediately interesting to me due to my fondness for fiction from that period. (There was a nice in-joke involving Les Misérables that I particularly liked.) The story focuses on the work of Jayjay Falcon, an attorney, and his assistant Sparrowson, as they encounter and attempt to solve various cases. 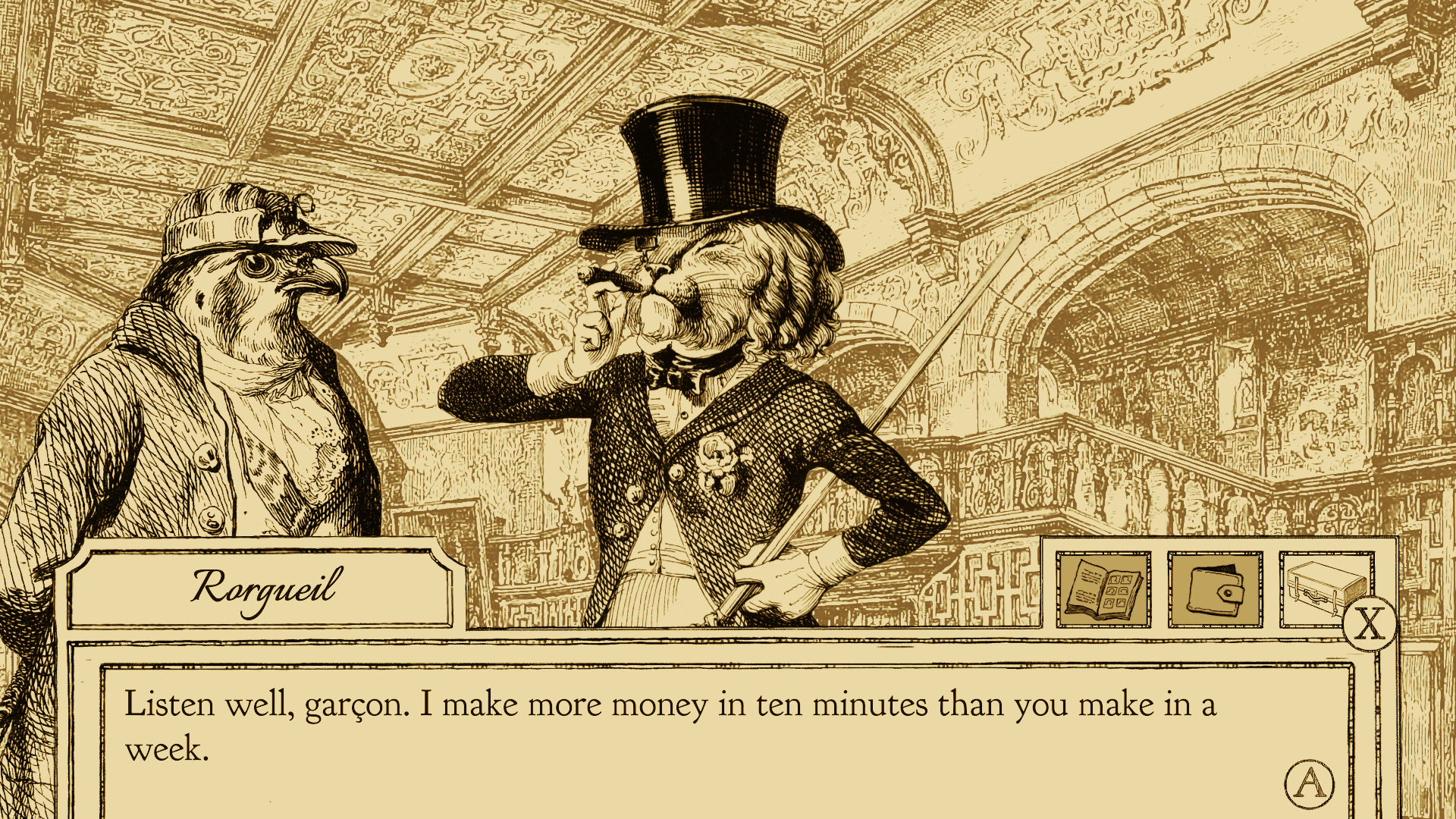 The writing shines in this game; it’s smart, witty, surprising, and even sometimes emotional. There are genuinely hilarious moments as you play, to the point where it’s surely one of the funniest games I’ve ever come across. The setting comes across strongly, and you’ll see all sorts of references, including ones to Voltaire, Napoleon, and Don Quixote. The game really benefits from its prose, with lines like: ‘His nostrils fill with the pungent aroma of sour wine and bitter tobacco.’ At another point, during a trial, I almost laughed aloud when the prosecution responded to my statements with: ‘The results of whatever crackpot, pseudo-scientific experiment you performed do not constitute valid evidence.’

Falcon and his assistant encounter many different characters, some of which are mainly just amusing, while others — Severin, a rival of Falcon, for example — make a much greater impact and come across as just as interesting and likeable as the main two. Characters in this game sometimes aren’t what they seem, so try not to make quick judgements about them. Severin, for example, surprised me in how much I came to actually like him despite some of his condescending attitude. There is also an antagonist during Act 3 who surprised me by displaying hateful qualities alongside more positive ones. Never be assured about who to watch out for, because the game doesn’t always show its hand to you until later. 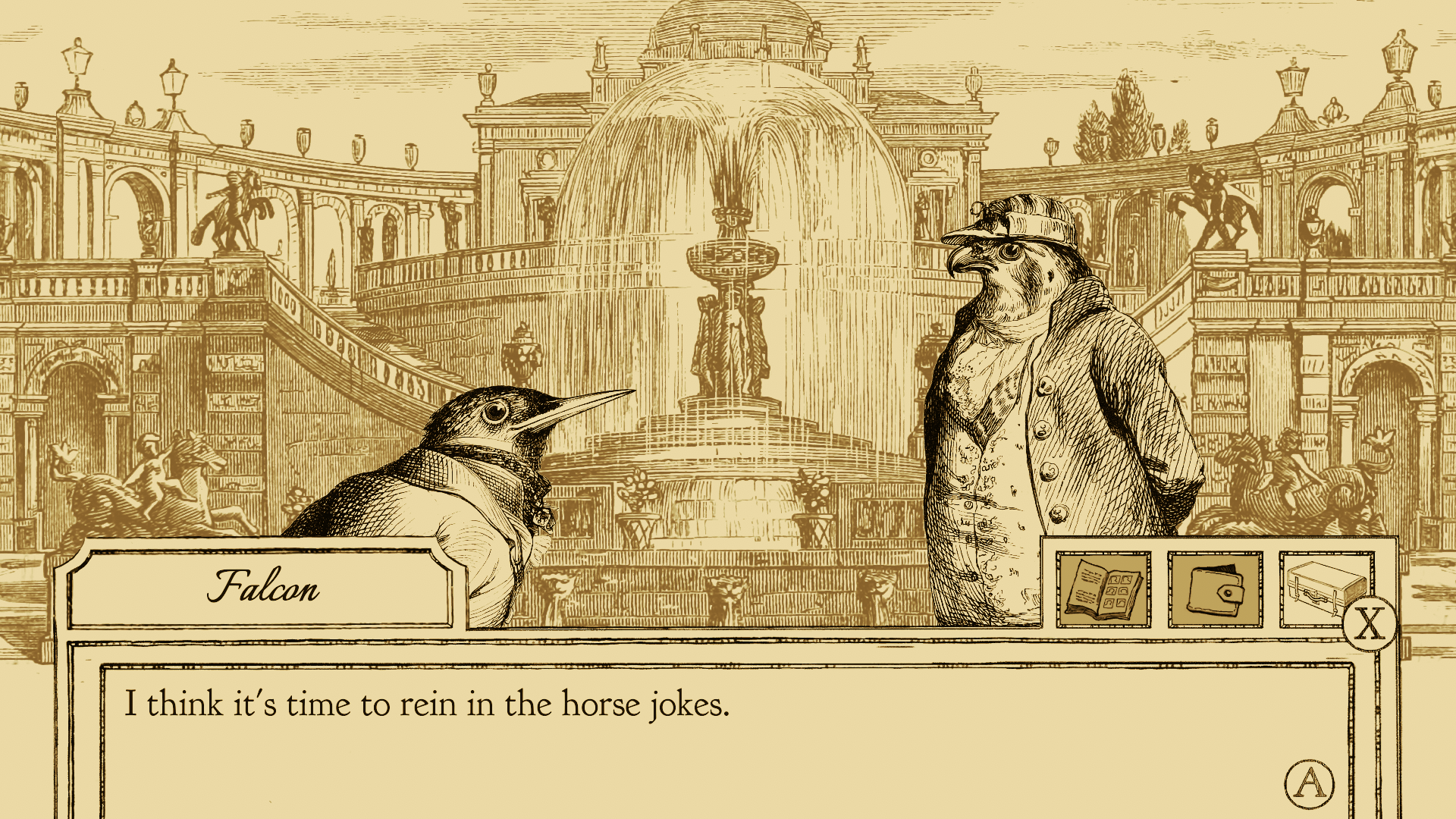 Don’t be fooled into thinking that the game is simply a big comedy either. It’s an easy mistake to make at first, but as you play you will begin to see that there is actually a serious edge to scenes, and sometimes cases can actually end in real tragedy if you fail to do them properly. (This happened to me during Act Two, and the conclusion was haunting.)

The visuals are apparently based upon the illustrations of J.J. Grandville, while the music includes the work of the famous composers Frédéric Chopin and Camille Saint-Saëns. Both of these areas work very well for the game. The artwork for the characters is always detailed and pleasant, while the background art (while variable in detail) is usually appealing. Even the simple illustrations for the opening acts (basically just a bit of a pattern and the title of the act) are wonderful and elegant to look at. The music, while not something that really struck me, was still nice enough, particularly the theme chosen for when you visit the tavern. 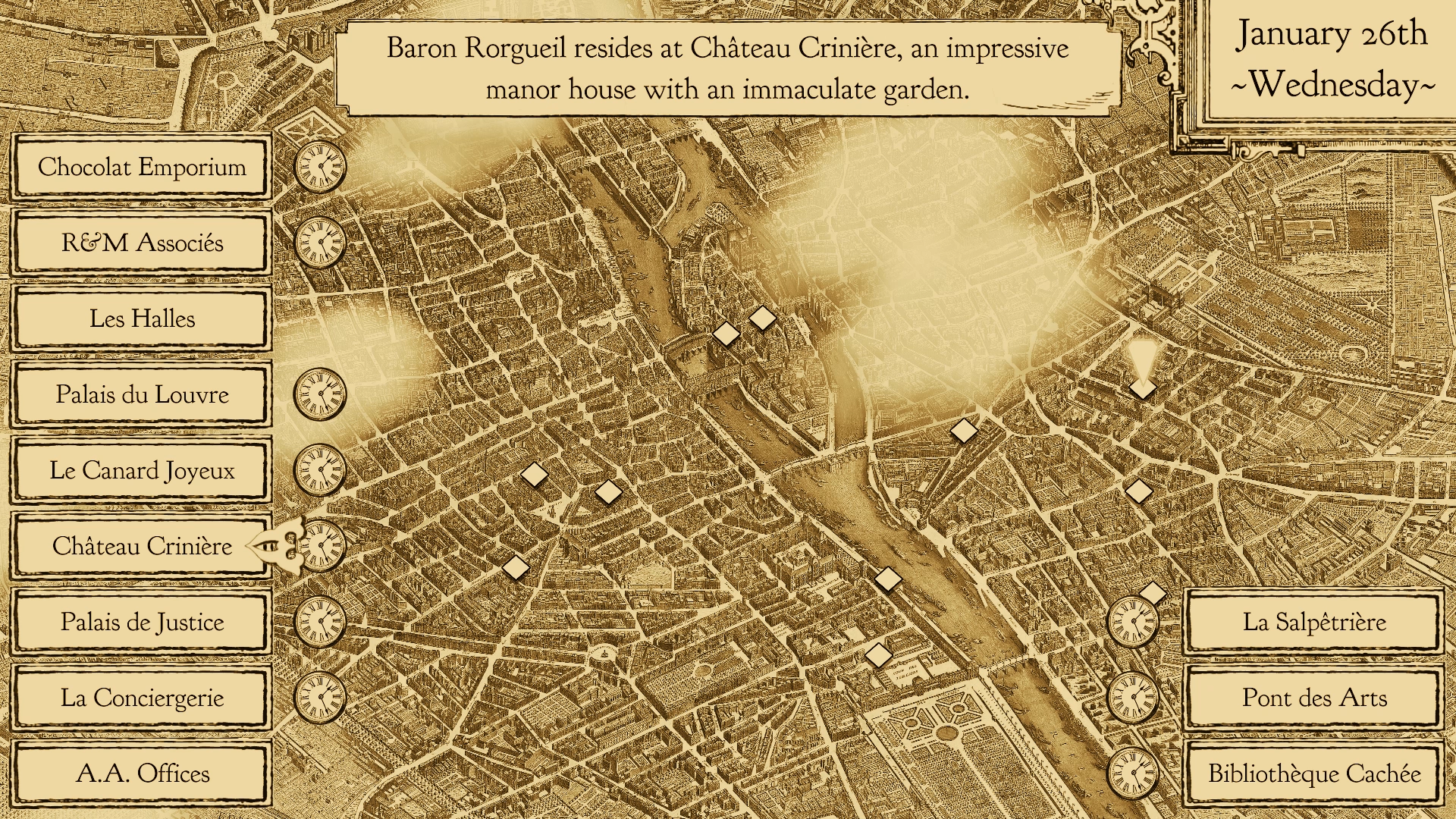 The gameplay involves you interviewing people and examining areas for clues. You may find yourself having to negotiate with some, pressure others for more information, or even break into an area and steal. The interview scenes are involved, with a few dialogue options that you can choose from, a feature that I always enjoy in games. Aside from allowing you to collect more information, this process also gives you more insight into the personalities of the characters you encounter.

Examining areas for clues utilizes “Investigation Mode,” where you are presented with an illustrated location and must use the analog stick or directional buttons to hover over different objects, selecting them to see if they turn out to be important. There was actually a nasty bug in one of these investigation scenes that took place in Act 3 that stopped me from progressing for a while. The developers have thankfully patched it, so you should have no issues there.

After a period of investigation, you will progress to the actual trial, where you get the chance to cross-examine witnesses in order to try and defend your client, which turned out to be my favorite part of the game. The trials are a highlight, with great banter between the defense, prosecution, judge, and witnesses. You must choose which questions to ask the witness, being careful to avoid ones that will irritate the judge and jury. If you don’t have the right evidence, or don’t make the right decisions, you lose and must then deal with the consequences.

If you wish, you can play a fun little card game called Jacques-Noir in order to earn more francs. I didn’t bother with it most of the time as I found that I didn’t need the extra money, but it can be enjoyable in a very simple/basic way. There is a useful time mechanic in the game, which allows you to travel to previous days during a case and redo certain events and sections. There is even a fast forward option that thoughtfully addresses the tedium of having to read through all your conversations again.

The only real complaint I have with this game is that it felt too short; I wanted more time with Falcon and Sparrowson, with perhaps another two cases or so. Despite this, however, the game as it stands is genuinely good, with solid storytelling, gameplay, visuals and music. It’s definitely worth checking out.