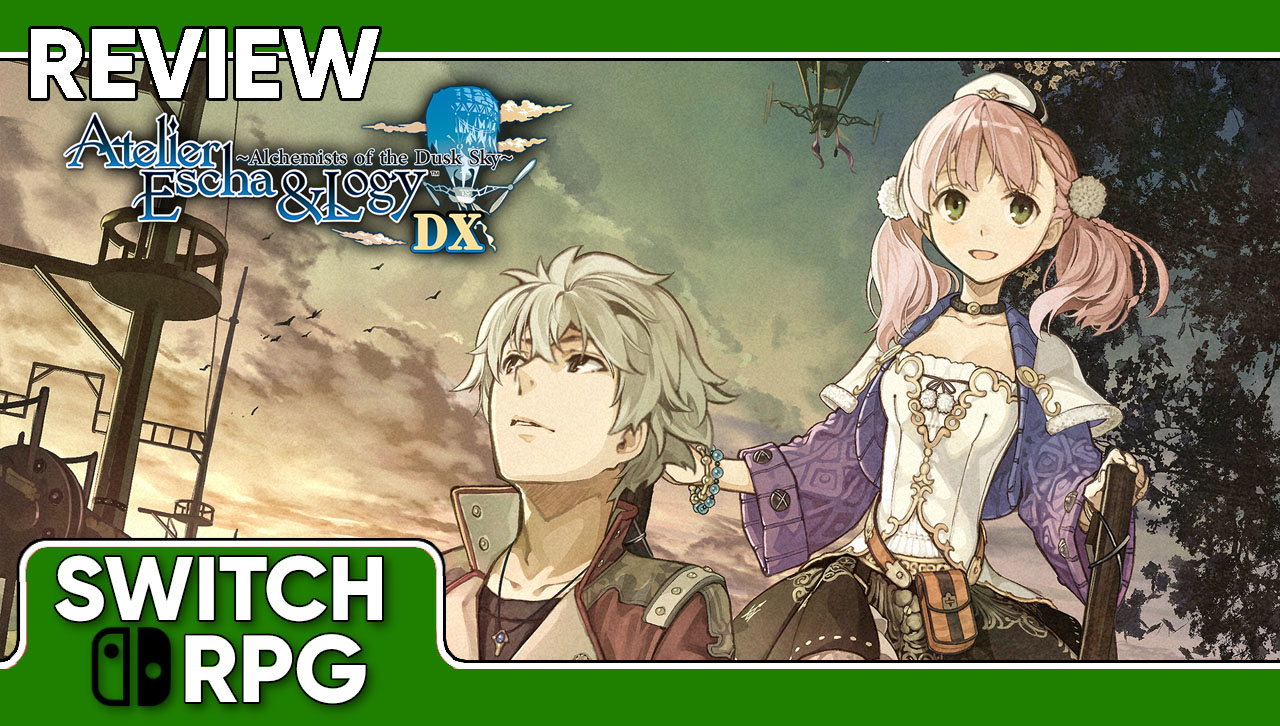 Atelier Escha & Logy is the second entry in the Dusk trilogy, part of the much larger (and longrunning) Atelier series. A direct sequel to Atelier Ayesha, it features tweaks and changes to the tried and true Atelier (synthesizing/gathering/exploration) formula, most of which I welcome with open arms (as predicted in my Ayesha review). That said, Atelier games have a tendency to do certain things extremely well, but not everything. Fortunately, Escha & Logy improves on the gameplay groundwork laid out by Ayesha, making it one of the more enjoyable entries in the series despite some issues that will be scrutinized later. 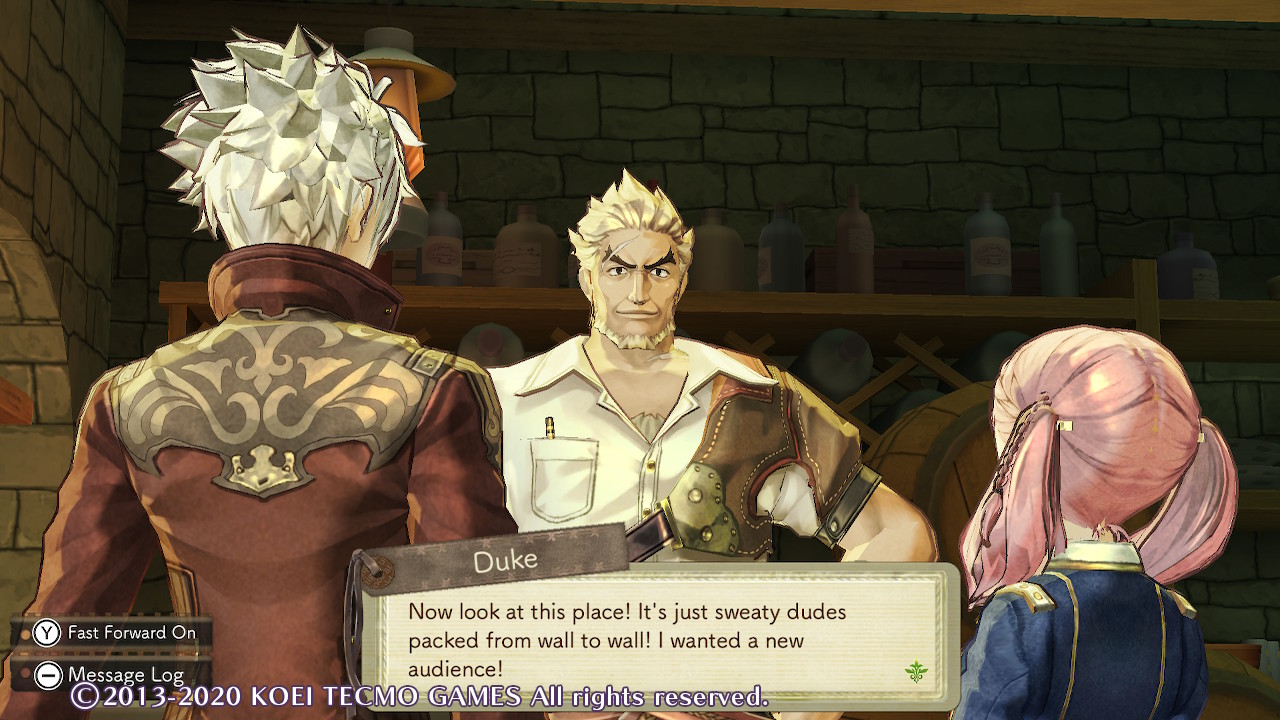 Atelier Escha & Logy takes place a few years after Atelier Ayesha, featuring a few familiar faces alongside a slew of new characters. Escha and Logy, the two primary protagonists, are up-and-coming alchemists that have been assigned to the research and development team in the town of Colseit far to the west of the lands explored in Atelier Ayesha. As was the case previously, alchemy and alchemists are still a bit of an anomaly here, but are believed to be key in surviving the Dusk End – an era of global decay and famine…I think. The whole “Dusk” concept is somewhat glossed over in both games, but you get an idea of what is going on through the bare context provided.

Regardless, the R&D division often explores dilapidated ruins for this very reason; technology and alchemical wonders here may help the alchemists to better understand the impending crisis at hand. However, it could also be that these issues are cyclical, and that the rise in alchemy could very well bring about the unknown destruction of the past era – in the wrong hands, at least. One ruin in particular is the focal point of the narrative – a seemingly impenetrable, floating citadel of sorts – but it doesn’t really come into play until well into the journey. Instead, the alchemist duo is charged with somewhat menial tasks to fill time that, while necessary, are a bit underwhelming in terms of narrative excitement.

New characters in the cast seem to suffer from the somewhat weak, late blooming narrative, as few really come into their own before all is said and done. Granted, I haven’t experienced each character’s ending at this point, but the somewhat lack of substance leading up to their respective ends makes it a bit of a moot point. This issue is compounded by the team’s decision to emphasize quantity over quality – there are a lot of new faces to meet, but most are forgettable. It’s not that the story and all new characters are bad – the former does pick up towards the end and there are (a few) clear stars in the latter – but there are certainly more pointless/uninteresing characters than there should be. That said, the main characters, Escha and Logy, are solid, and being able to play as either of them – each with their own story nuances – is a bold and welcomed change, no doubt. 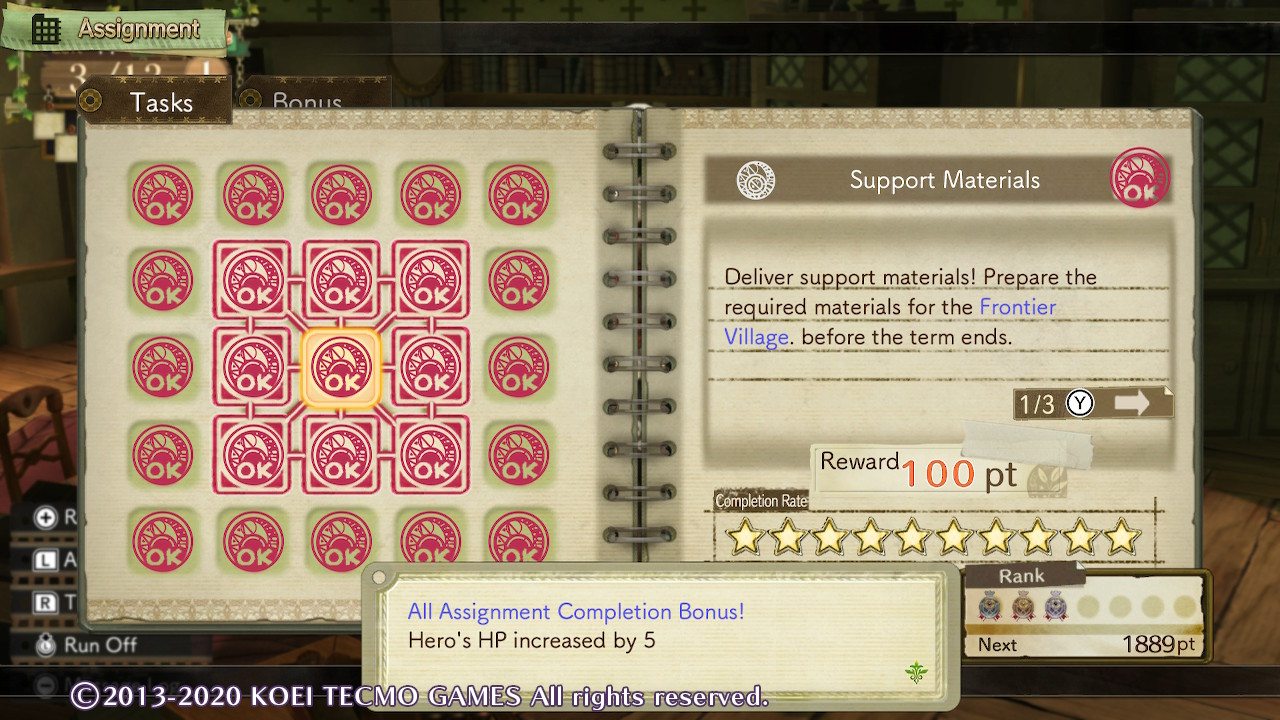 Fortunately, the gameplay loop in Escha & Logy easily offsets the previously mentioned issues. Once again utilizing the franchise staple time limit, Escha & Logy takes place (when certain objectives are met) over a four year span, with the first three following a schedule of tasks that are to be reported by the end of each period ( 3-4 months) while the final year is more or less wide open to the player. There is typically one primary objective with each period that must be completed, but these are so easy that you’ll generally complete them in only a week or two, leaving the remainder of the period open to focus on the plethora of sub-objectives and for creating powerful alchemical items and equipment. Completing specific tiers of objectives will provide bonuses in the form of alchemy recipes, stat boosts, and even cosmetic options.

Even the secondary objectives, however, are pretty easy to fulfill well within the time limit if you’re efficient with time management. There are a few outlier tasks – document collection, unique item usage, and certain event-driven ones – that are too convoluted for their own good, but can be circumvented (if you’re keen on avoiding eating away at the time limit) by glancing at a guide. Ultimately, the massive amount of bite-sized objectives clearly defined here are much appreciated after coming from Ayesha’s deceptively “lax” time window, and there was never a major sense of urgency to complete them outside of the aforementioned anomalies and final objectives. In short, this is one of the most relaxed time limits in the series, and a good recommendation for those that want to dabble in a time management Atelier game without fear of overly stressing out about it. 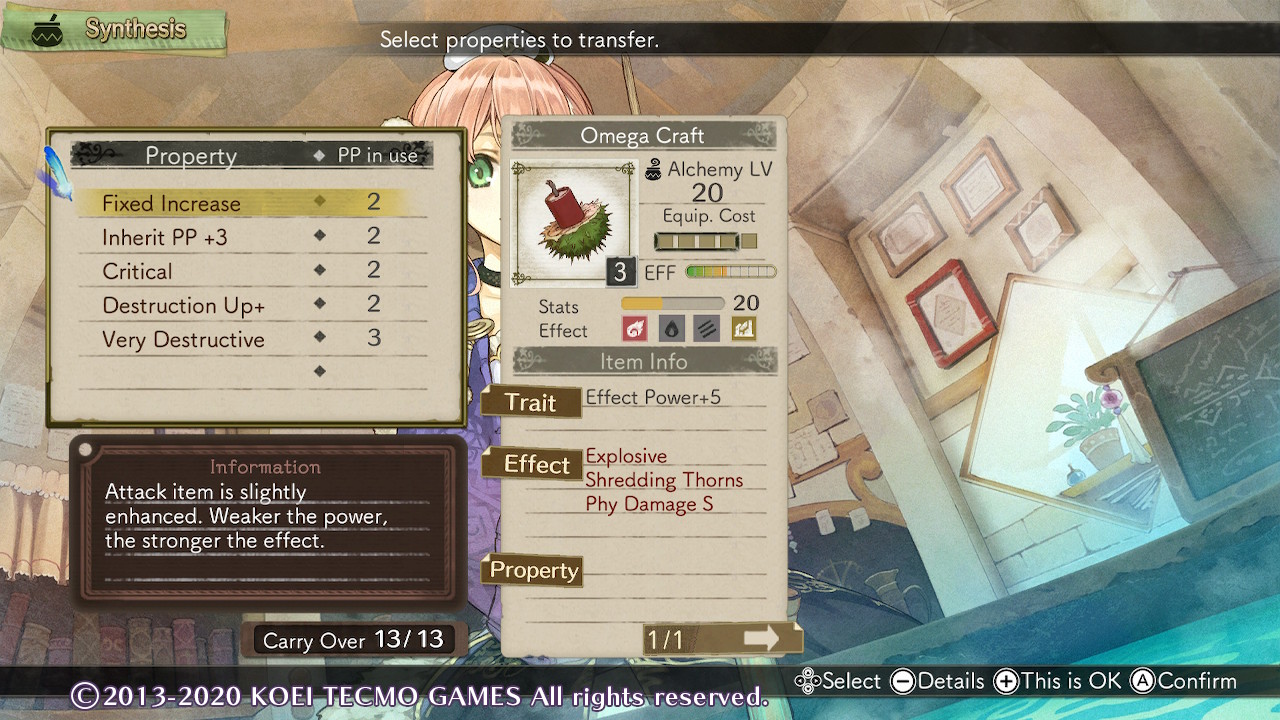 Alchemy feels quite intuitive in Escha & Logy, as well. It maintains the core synthesis depth the franchise is known for while making the web of underlying mechanics – combining/carrying over properties, traits, and effects – appear in one of the most user-friendly packages (I’ve seen) to date. It is pretty easy – perhaps too easy, at times – to get some great synthesis results when you just put your nose to the grindstone, and it feels especially good to maximize and optimize your syntheses.

As alchemists, Escha and Logy can carry a wide variety of items outside of their Atelier and into combat, but they are limited by a slot-based system. Each of these “field” items take up a certain number of slots, and the alchemists only have a set amount available based on overall game progression. Although you may not be able to bring everything you want every time you set out for adventure, there are ways to “compress” items which normally take up multiple slots through the proper usage of properties/traits during item synthesis.

Escha & Logy uses a turn-based combat system that leverages six party members at a time – three “active” members in the front, and three “support” members in the back. The front row can use normal actions, such as basic attacks, skills, and alchemy supplies (depending on the character), but the back row can only perform support actions. Fueled by a numerical support bar, these actions can provide crucial offense and defense to the active team. Furthermore, chaining multiple attacks together can open up unique, special support abilities once a certain damage % threshold has been achieved. 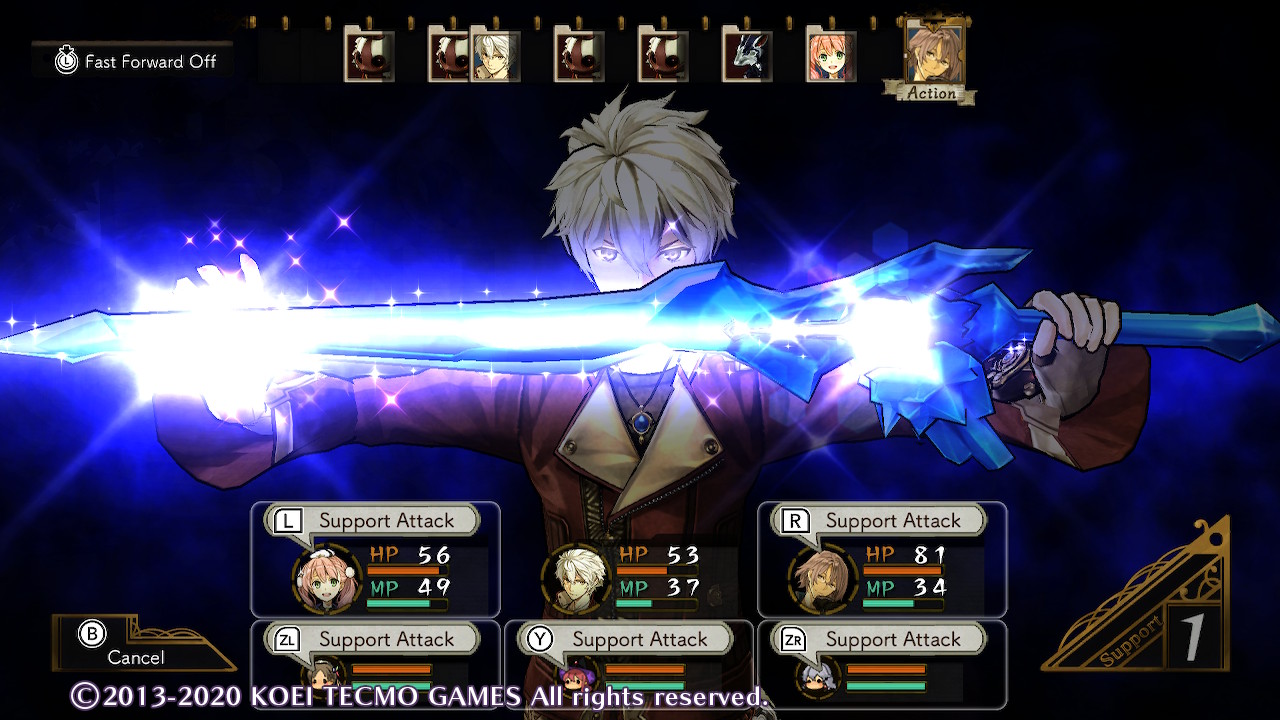 Players can freely swap between the front and back row, and it is often beneficial to do so thanks to the damage immunity and regeneration perks that the latter offers. And, should the front row be wiped out, the back row will happily(?) take their place in battle. There’s a surprising amount of depth here that can be exploited to decimate foes, but it also makes Escha & Logy pretty easy…for the most part. With this being the deluxe version, it features several DLC bosses that will absolutely destroy you if you’re unprepared — and you probably won’t be since these encounters aren’t clearly telegraphed to the player. Still, the unique combo system here is a lot of fun even though it is completely unnecessary for the majority of encounters.

Exploration has been made a bit easier in Escha & Logy. Instead of a sprawling single map of nodes to explore, areas have been condensed into their own respective clusters of nodes that branch out into sub-nodes once you visit them. Basically, there is less time wasted traveling to and from specific areas because only primary node movement – not sub-nodes – takes time away from you. Like most Atelier entries, individual areas in Escha & Logy are compact, only featuring a handful of gathering points to collect and enemies to dispatch. Traveling and resource gathering will continually chip away at your time limit, but this can be made less invasive through research opportunities at the R&D headquarters. Research perks can also provide massive bonuses in combat and production in general – for a price, of course. It is doubtful that the player will be able to benefit from every research perk, as the bulk of the alchemist team’s income comes from a monthly stipend that is based on your performance of the previous month. While this stipend can be substantial, recipe books can cost an arm and a leg, as well.

Speaking of production, the series staple homunculi return as a valuable asset to the alchemists. Completing an ever-changing list of tertiary tasks – dubbed requests – the player can pay the homunculi (in treats and sweets) in exchange for their knack for cloning items and resources. This can be a huge time saver when properly coordinated, as the homunculi can perform these tasks while you are busy doing other things. No Atelier experience would be complete without multiple character endings and a myriad of character-driven events, too, and Escha & Logy has plenty of both. Even though the cast here isn’t as strong as the one in Atelier Ayesha, the events are still entertaining. Overall, Escha & Logy makes a strong case for one of the tightest, most engaging gameplay loops found in any time-based Atelier title that I’ve experienced so far. 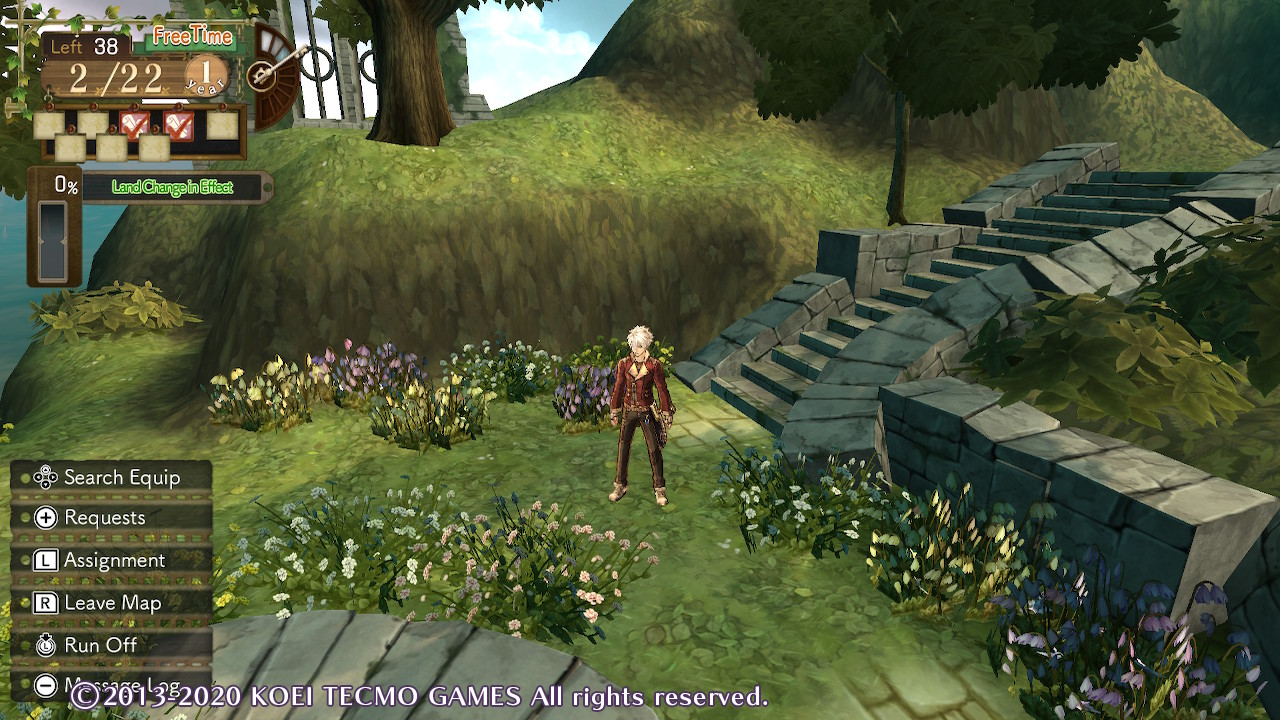 Although the graphical jump between Ayesha and Escha & Logy isn’t as striking as Meruru to Ayesha was, it is still appealing and does feature a few subtle improvements. Character designs are unique, varied, and the colorful art in general compliments the lighthearted feel of the experience quite well. Combat animations are often over-the-top but in a genuinely impressive sense – most special attacks look and feel amazing! The music, unfortunately, is pretty forgettable though, with only a few tracks standing out among the underwhelming majority. The English voice acting also seems to be a step down in quality in comparison to Atelier Ayesha, but it can always be turned off or switched to Japanese, if necessary. Performance-wise, the game fares better than most of the Atelier titles I’ve played recently and is relatively stable with its framerate.

Atelier Escha & Logy is one of the more impressive older Atelier titles that I’ve played thus far. It is very clear cut and objective-based, but does so without making the time restrictions feel too daunting. There’s never really any danger of failing the main task, but there are some sub-objectives that might get you sweating a little bit. It is a lot of busy work, sure, but the gameplay loop is really enjoyable – fortunate, considering the state of the narrative and cast. Again, nothing is downright awful here, but something just feels, I don’t know, off with the bulk of the new characters in Escha & Logy. This isn’t universal, though, as the main protagonists and a handful of supporting characters are still well done, and the handful of returning characters help offset this a bit. 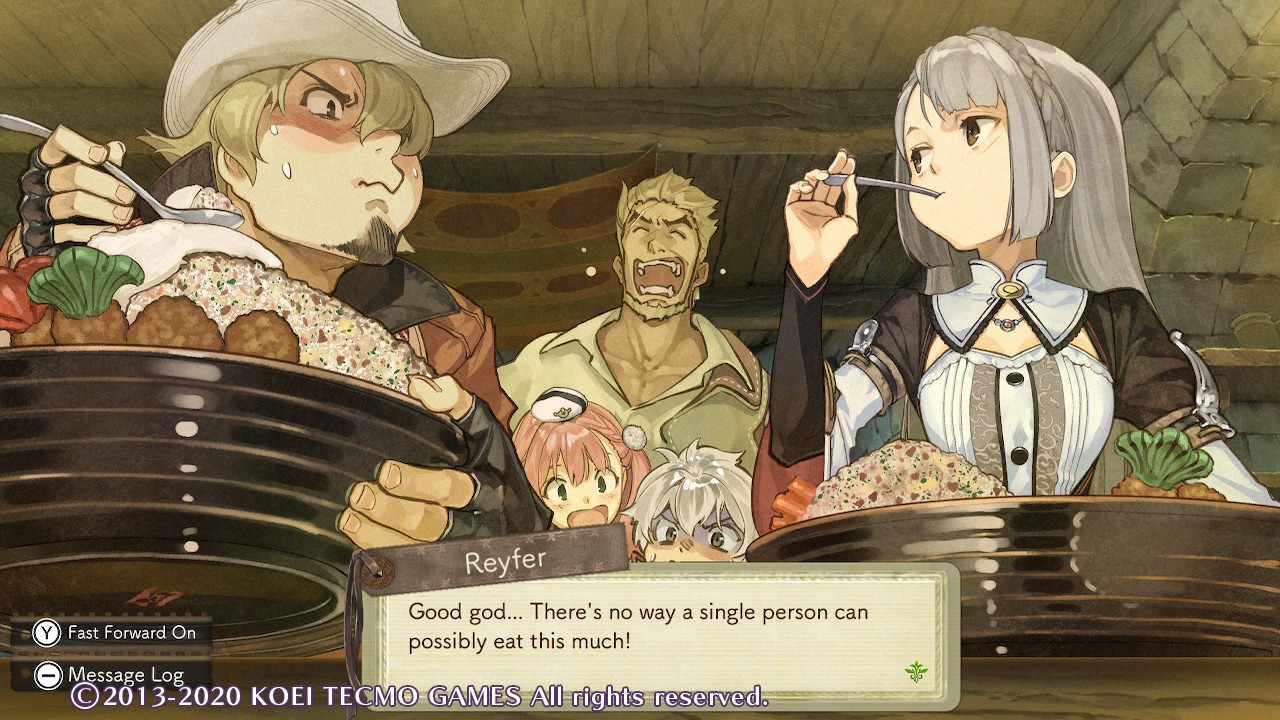 Regardless, Escha & Logy is really fun to play. The newly renovated combat system is great even though most encounters (save for face pulling DLC bosses prematurely) can be completed with ease. The alchemy system is very user-friendly this time around and, as always, is a blast to mess around with. All that said, players obviously will get the most value (and potential enjoyment) by playing the game multiple times over, whether it be to seek out all the individual endings or to leverage NG+ in hopes of downing the DLC bosses. There are still 25-30+ hours of content here for a single run, with my own playthrough just biting at the heels of the latter. Escha & Logy may be shaky when it comes to some things, but it remains one of the better “older” Atelier games available on the Nintendo Switch.