I was introduced to the longrunning Atelier series early last year and was surprised at just how much I loved its unique gameplay loop; one which emphasized crafting (aka synthesizing) over everything else. Having recently wrapped up Atelier Ryza – fantastic, by the way – and fully buying into the hype surrounding its upcoming sequel, I decided to dive into another handful of Atelier games on Switch. Released between the first three “Arland” titles and the “Mysterious” trilogy – the latter of which is unavailable on Switch – the Dusk trilogy (starting with Ayesha) would likely repeat the trend of changing up the formula ever so slightly while maintaining the essence of what makes an Atelier game, well, Atelier.

Although I see its inaugural title, Atelier Ayesha, as an overall improvement over the previous Arland games, it still lacks the tools necessary to be an exceptional experience through and through. 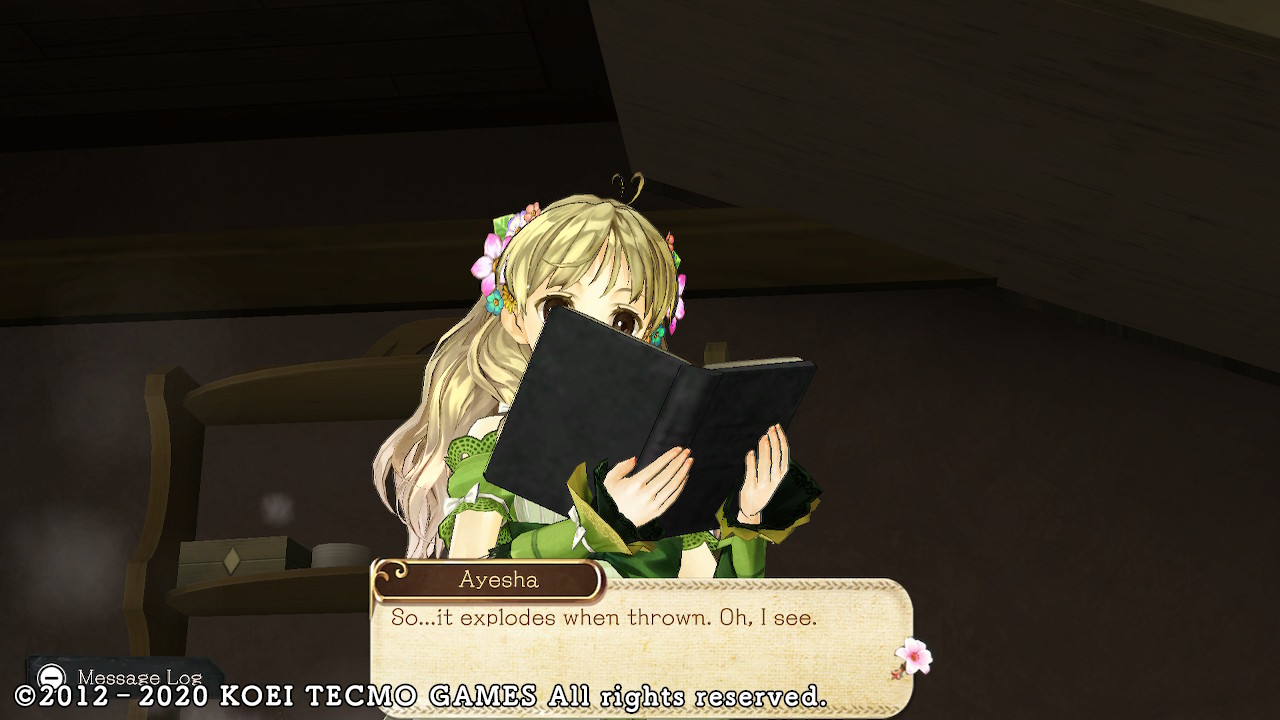 Atelier Ayesha centers around an apothecary named Ayesha and her struggles to find her sister, Nio, who vanished without a trace years ago. Though many presume Nio to be dead, Ayesha doesn’t ever completely give up hope and this persistence is eventually rewarded. One day, Ayesha sees a ghost-like image of her sister, fortunately, in the presence of an extremely knowledgeable (but equally mysterious) alchemist named Keithgriff. Confirming that the sight wasn’t a hoax or a product of her own imagination, Keithgriff explains that there may yet be hope in finding her sister.

The seasoned alchemist claims that Ayesha only has three years to find Nio or she may be forever lost in her ghost-like state. Ayesha struggles to come to grips with the actual terminology, but her apothecary processes are actually, in fact, those of an alchemist; a seemingly lost art that once served as the cornerstone of discovery and productivity in a bygone era. With little to go on but Keithgriff’s grim proclamation and her own desire to see her sister once more, Ayesha commits to improving her alchemy and traveling abroad in search of mysterious flowers said to be tied directly to the sightings of Nio. 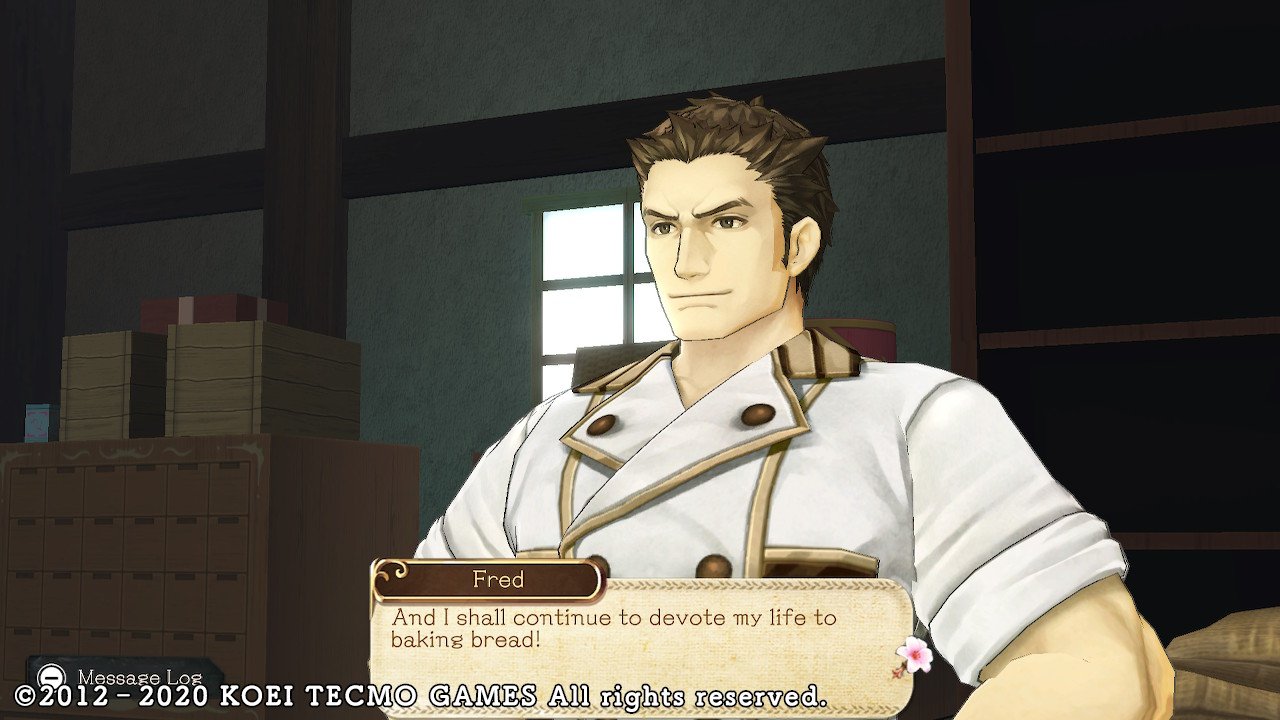 Atelier Ayesha starts out strong narratively with a high stakes, clear mission in mind, supplemented by an array of interesting support characters. As the months roll by, however, you begin to see flaws in the design, especially when it comes to the cohesion of the supporting characters within the primary arc. Although this is true to an extent in every Atelier game I’ve played (except for Ryza), it feels like more of a disconnect here than previously. One would expect some form of connection between all characters when it comes to the primary task at hand – finding Nio – but it feels more like Ayesha is alone in the task save for a couple of key supporting characters. I haven’t experienced every ending, though, so it is possible that this becomes less concerning once you’ve seen them all. Even so, the ending I experienced was adequate enough for me not to dislike the narrative either.

Atelier Ayesha continues the trend of multiple endings that I, for one, am glad has been moved away from in more recent entries. It is more or less designed to be played multiple times over if you want to see everything, which in itself can be a good or bad thing depending on your tastes and patience. If you’re a “one and done” kind of player, then strictly following a guide is essential to experiencing everything in one whack despite the potential flaws associated with it. Either way, I’ve found that the narrative is rarely a strong point in any Atelier game, but the opposite is often true when it comes to the cast itself. Thankfully, Ayesha has a great cast to help support its relatively weak story. 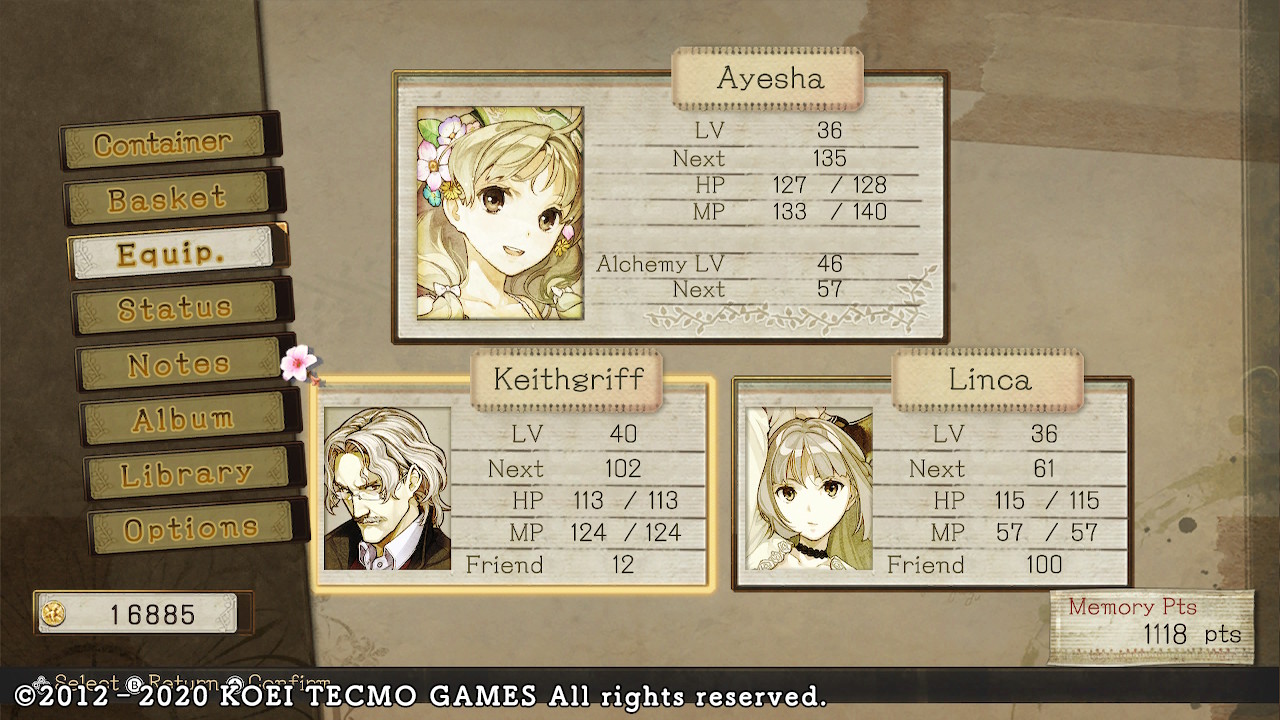 Most older Atelier games (including this one) are very much resource management affairs. Often, you’ll have a set amount of time to complete specific objectives in order to achieve certain endings. Although Atelier Ayesha features a similar gameplay loop found throughout the franchise – time/resource management, exploration, combat, and character interaction – it does prioritize them a bit differently than before. Alchemy is still technically king here, but exploration plays a more important role than it did in some of the previous entries. There are still certain story bits that are gated behind crafting specific components, sure, but many require the player to experience certain events and/or clear specific areas in order to fully open up the world (thus attain more events and endings).

Crafting feels more streamlined here than the earlier Arland titles – in some ways, even Ryza – but still offers plenty of depth. Gathering materials from nodes on the field or from combat can be used to fuel recipes for a wide variety of goods. Individual ingredients come with their own properties and traits, which can be carried over to the finished goods when certain conditions are met. Recipes are fueled by CP, with each required material assigned a certain number of points that it deducts from your overall CP pool when thrown into your alchemy cauldron for synthesis. In short, the goal here is to intelligently carry over as many properties/traits as possible to finished goods while never going over your CP limit. 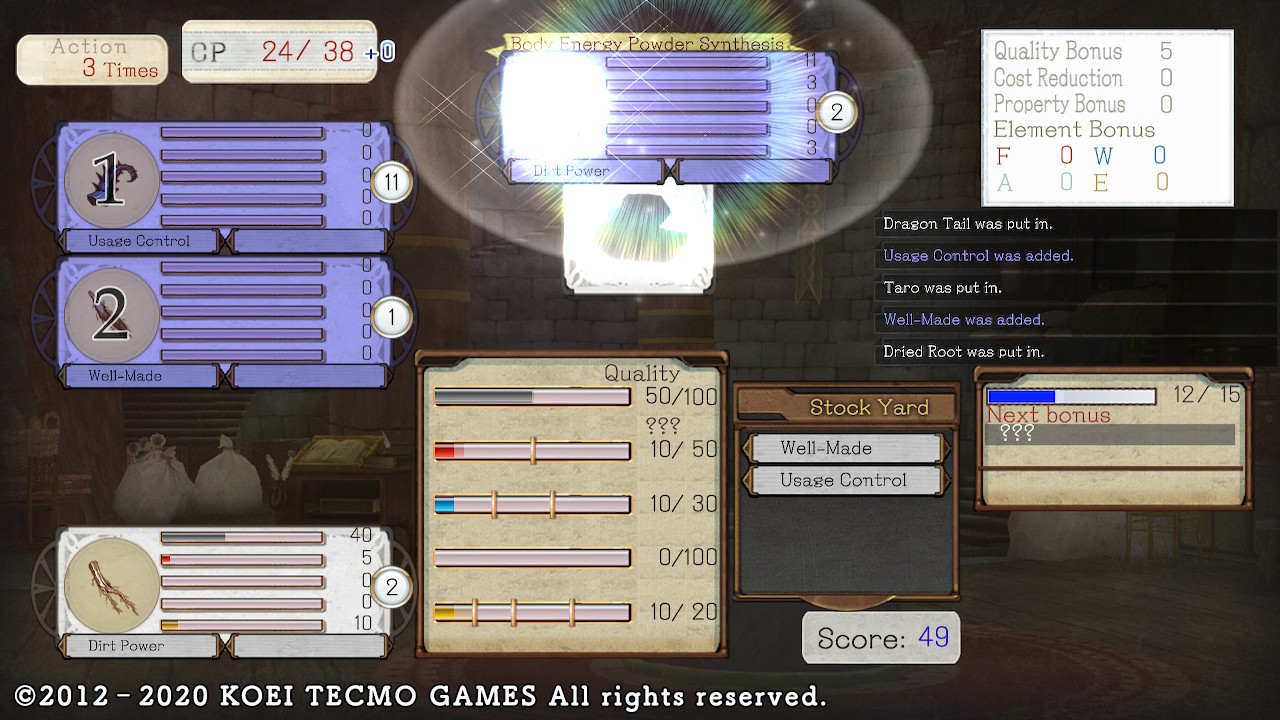 As your alchemy level increases, Ayesha will be able to take advantage of more complicated recipes and leverage special synthesis skills, such as duplicating the elemental properties of items (making it easier to get superior versions of the finished goods), and more. As an alchemist, Ayesha can use many of the items she creates in-combat, but surprisingly cannot create weapons and armor. Instead, gear is found primarily through monster drops and treasure chests and are usually discovered in an unidentified state. Only after using a whetstone (for weapons) and dye (for armor) will the equipment’s true properties show, both of which can be synthesized by Ayesha.

Before the Diablo fans out there jump for joy over the unidentified items, they aren’t as exciting (or in depth) as they seem. Here, revealing the traits of equipment rarely, if ever, is exciting, with most new tiers of equipment featuring measly base stat upgrades that will likely pale in comparison to your current loadout if you’ve been utilizing whetstones and dyes. Simply put: if you can coast through the majority of the game in starting gear (upgraded, of course), then there might be a problem with your equipment system.

Admittedly, there is a “Hard Mode” available from the get-go that is likely better suited for veterans, but even some of the bosses on normal mode will require you to be in tip-top shape in order to beat them. The final boss of Keithgriff’s ending is literally a night and day difference in terms of difficulty compared to everything else you’ll face naturally in the story. There are some superbosses beyond that that are certainly not for the faint of heart, too, and though you may run out of time to efficiently take them down on your first run, New Game Plus may ease the burden a bit in your next attempt. Atelier titles are consistently uneven in regards to difficulty, and it is something I’d like to see improved upon in the future. 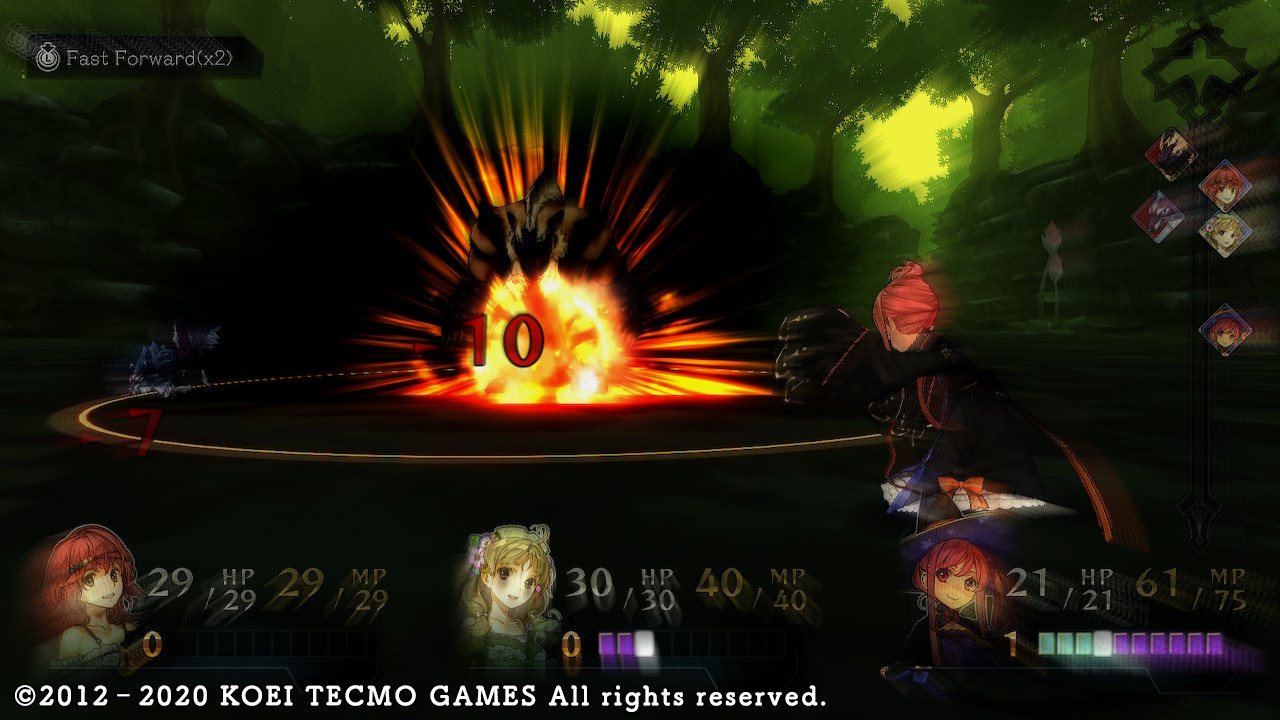 Despite difficulty woes, the turn-based combat is still enjoyable. Ayesha has access to a basic attack and items, while supporting characters use skills in place of the latter. Character-to-enemy positioning comes into play, as well, with critical hits guaranteed when attacking enemies facing away from you and being key in performing some “active” commands that build up over time. Furthermore, powerful special attacks become available for each character that can help turn the tide of more difficult battles.

Though modern Atelier titles have begun to shy away from the staple “timer/deadline” mechanic, Atelier Ayesha features it in full force with its extension-free, three-year time limit. You are free to do as you please for those three years, even completing the main objective well before it is required, but the game will always end at the same time no matter what you do. One might think that the “simple” task of finding a sister in three years might be relatively stress-free in comparison to Meruru’s kingdom building system, or Totori’s Adventurer level, but the opposite is true due to the lack of time extensions and deceptively lax objective time frame.

Time, in true Atelier fashion, is easy to lose track of since almost every activity chips away at it to a degree. One advantage to extension-less gameplay, though, is that players looking forward to playing multiple times over can hop into a fresh run in as little as 15-25 hours (I personally finished in around 20).

As a whole, the gameplay is about what you’d expect from the Atelier series, though the lack of extensions – and less emphasis on alchemy in general – may be cause for concern for some. While some of the new features in Ayesha fall a bit flat, others, like the bonus-ridden Memory system and periodic (but extremely lucrative) Treasure Contest, are nice additions to the loop. 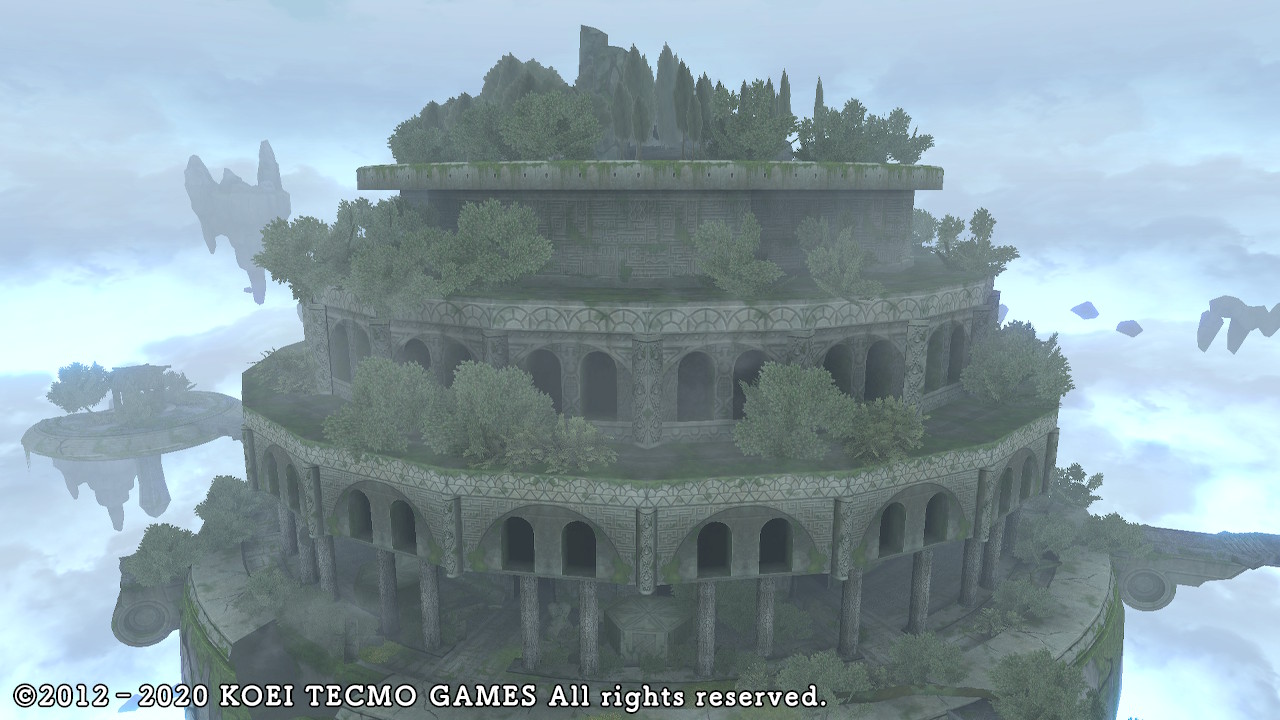 Atelier games have a tendency to improve graphical quality, if only slightly so, with each new release, and Atelier Ayesha is no exception. In fact, Ayesha appears to be visually superior on all fronts in comparison to Meruru, which was released only a year prior to it. Each character dons a unique attire to match their contrasting personalities, with a decent selection of bonus outfits becoming available to most characters after reaching certain milestones. While the world itself isn’t a graphical marvel, the colorful and varied designs of each area compliments the cel-shaded, hyper stylized character art quite well.

The music here is pretty standard fare for an Atelier game – some tunes are quite catchy, others won’t stick with you for too long, but none are terrible. Many of them are consistent with the rather high-spirited tone of the game, but the score isn’t without some darker, foreboding tunes either. This version of the game includes both Japanese and English dubs, and the latter is surprisingly good (but certainly not great).

Performance-wise, Atelier Ayesha is a bit shaky in some areas, with extreme dips in framerate being common in a handful of areas. Fortunately, this never hinders that actual flow of gameplay, but is unsightly nonetheless. Regardless, if you are a fan of previous Atelier design – or anime in general – you should like the graphical package presented here. 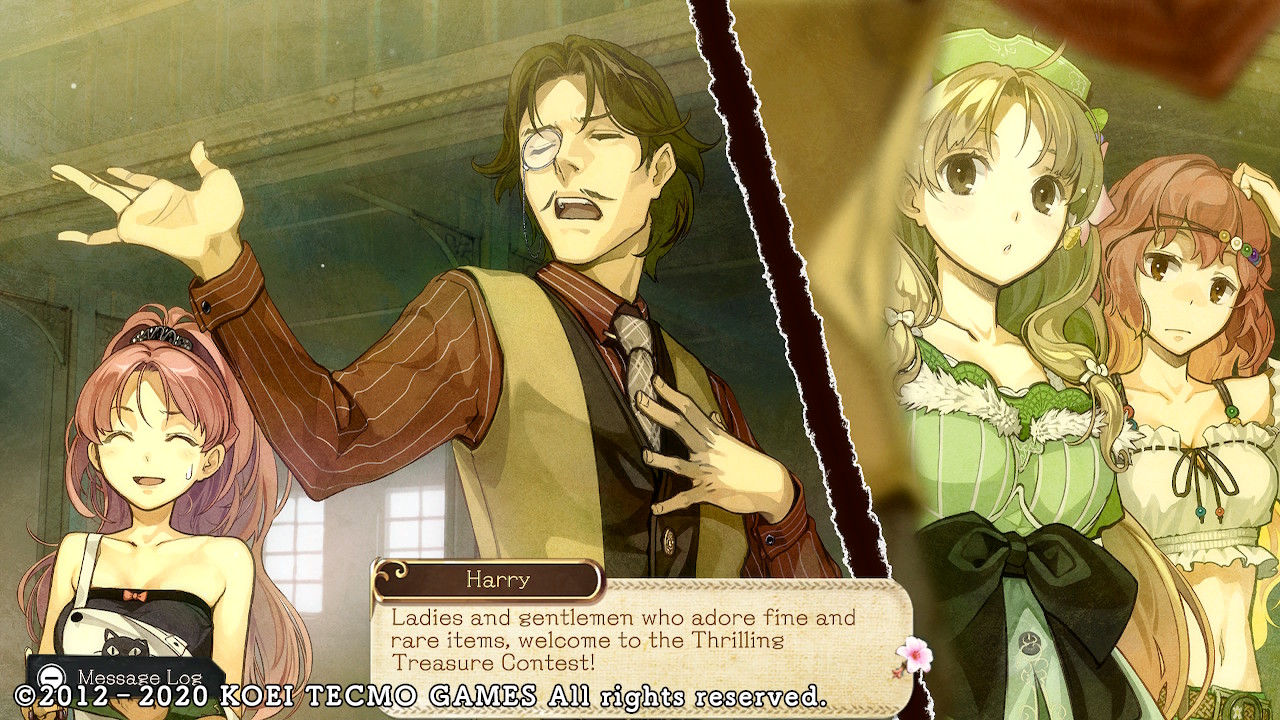 Even though Atelier Ayesha wasn’t a disappointment, it is far from my favorite entry in the franchise. The core gameplay loop is consistent with franchise standards, but some bits – lack of cohesion/excitement with the Nio arc, questionable unidentified gear system, and the absence of time extensions, to name a few – may make this a less than ideal experience for some. While I can appreciate the more free-form objective window here to an extent, it conversely has made me realize that more restrictions (in a time-based Atelier game) aren’t necessarily a bad thing. Even though the primary focus of the narrative ultimately leaves a bit to be desired, the cast is pretty great and I can’t wait to see how returning characters continue to develop in subsequent entries. Atelier Ayesha, while flawed, is still a solid Atelier experience that I’m sure will only be improved upon in the next two “Dusk” games.