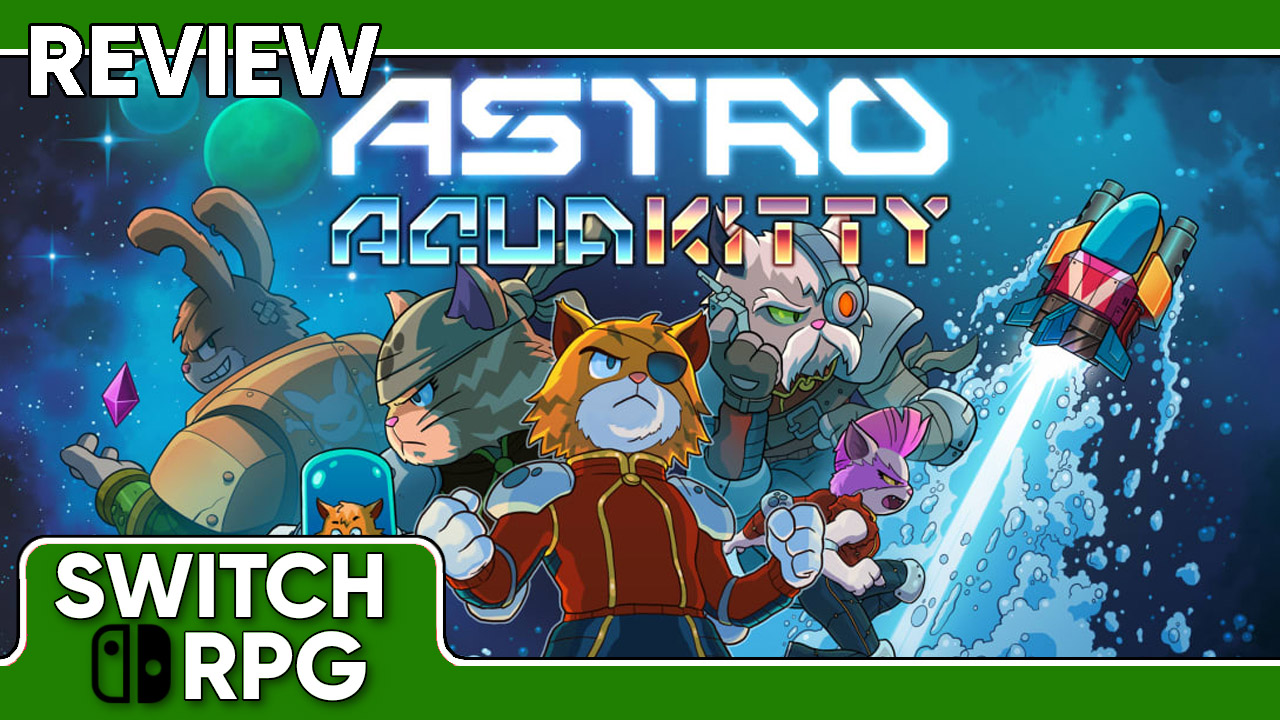 There’s a certain type of value in games where you can shut your brain off and not have to think too deeply about battle systems and let your instincts play the game for you. While I may come across as a snob who only cares about captivating storylines and anime characters, I can appreciate a fun game when I see it. When a game perfects its gameplay loop and can make you want to keep trying with just one more level (even when your reflexes may not be the best under pressure), you have a gem.

Astro Aqua Kitty is the sequel to Aqua Kitty UDX, which also appeared on the Switch. However, you don’t need any experience with that game to jump into this one, as anyone even vaguely familiar with shoot-em-ups will be able to get familiar in no time. A fun mixture of shoot-em-up RPG, flying around in space destroying monsters and pieces of asteroids, and playing as two of eight different cats, how does Astro Aqua Kitty hold up? Let’s find out!

I want to preface this review with the fact that the story in Astro Aqua Kitty is almost non-existent. You play as the pilot to a ship, who is helped by their engineer, as they explore around several asteroid belts and perform tasks for other space cats that you find in several camps between the different levels. But outside of the occasional quirky moment with space pirates that suddenly appear trying to cause mischief, or a big bad that appears out of nowhere, the “story” is nothing to write home about. You don’t even have any names for the pilots or engineers you choose to play with, outside of their play style like Heavy and Repair. To help lead you from one area to another, you will come across certain NPCs with green exclamation points over their heads, designating them as a quest-giver. The quests pretty much amount to you collecting a certain amount of items to return or defeating specific monsters, and once you’re done with one, you’re on to the next. Given the amount of time it takes to clear Astro Aqua Kitty (it took me about 10 hours), the quests are easily-digestible and should take you no time to complete.

Astro Aqua Kitty is a shoot-em-up RPG where you control a singular ship. Each ship has one pilot and engineer, both of which you choose at the beginning of the game. Each has their pros and cons, so there’s not really a right or wrong way of choosing which ones to select. Along with being able to pick your pilot and engineer, you can also select your difficulty, which affects enemy health, their firing speed, and damage output. You can also select whether you want permadeath active or not. For your ship, there are many ways to customize your attack style. You can have up to two different gun types, set to A and B, and you can choose to either press the fire button at your discretion or press and hold to fire continuously. There are several types of guns that each use different amounts of energy and bullets/lasers, which you need to continue attacking. While it may be tempting to equip all of the powerful guns, you need to be mindful of your energy supply. Along with your weapons, you can also equip up to four enhancing devices, which grant you specific boosts, such as increasing your damage, laser length, armor, speed, and more.

Your pilot and engineer each have four skills, more of which you can unlock via leveling up in combat to help give you an advantage. Each of these skills costs one skill point, which you accrue every time you gain a level. Along with gaining skill points, you also are able to use weapons with higher skill levels tied to them. For instance, if you are currently level five, you won’t be able to use a level seven gun or enhancing device until you reach level seven yourself. By default, your ship will be facing towards the right as you enter a new level. In order to flip your ship to the other side, you just need to hit the L button. To upgrade your ship components (whether its weapons, enhancing devices, or ship stats), access the shop, unlock and switch up your character skills, or view the map, you can hit ZL. And to interact with certain components in the world, you would hit ZR.

Astro Aqua Kitty is truly a beautiful game, with a retro-inspired pixel art style. While several levels do tend to blend together due to multiple environments looking the same, they have so much detail and life to them that I never really found myself getting bored while playing. I especially love the fluorescent glow to the crystals, monsters, and plants, leaning more into that otherworldly atmosphere. The UI for the menu helps with that as well, although I did find the ship management page to be a tad cluttered. I also found myself enjoying the music, although I can understand why other people may not like it as much. All of the music is EDM-based and very fast paced. For those moments in battle where you find yourself wandering into a cluster of enemies or are fighting your next boss while dodging bullets and pulling off sick maneuvers, the music definitely feels appropriate.

Astro Aqua Kitty is a simple, yet fun experience. Given that my reflexes can get the better of me sometimes, the game kept drawing me in and had me saying “just one more time” whenever I died. I never really ran into moments where I felt that I died unfairly, although during boss fights, it can be very easy to land yourself in a bad position and end up dying quickly. But regardless, this game was still a treat to play through.

If you’re looking for an extensive story or deep character moments, this definitely isn’t the game for you. But if you want to spend a few hours of fun blasting through hordes of enemies before taking a laser to the face and dying, I would definitely recommend checking out Astro Aqua Kitty.