Armed to the Gears Review (Switch) 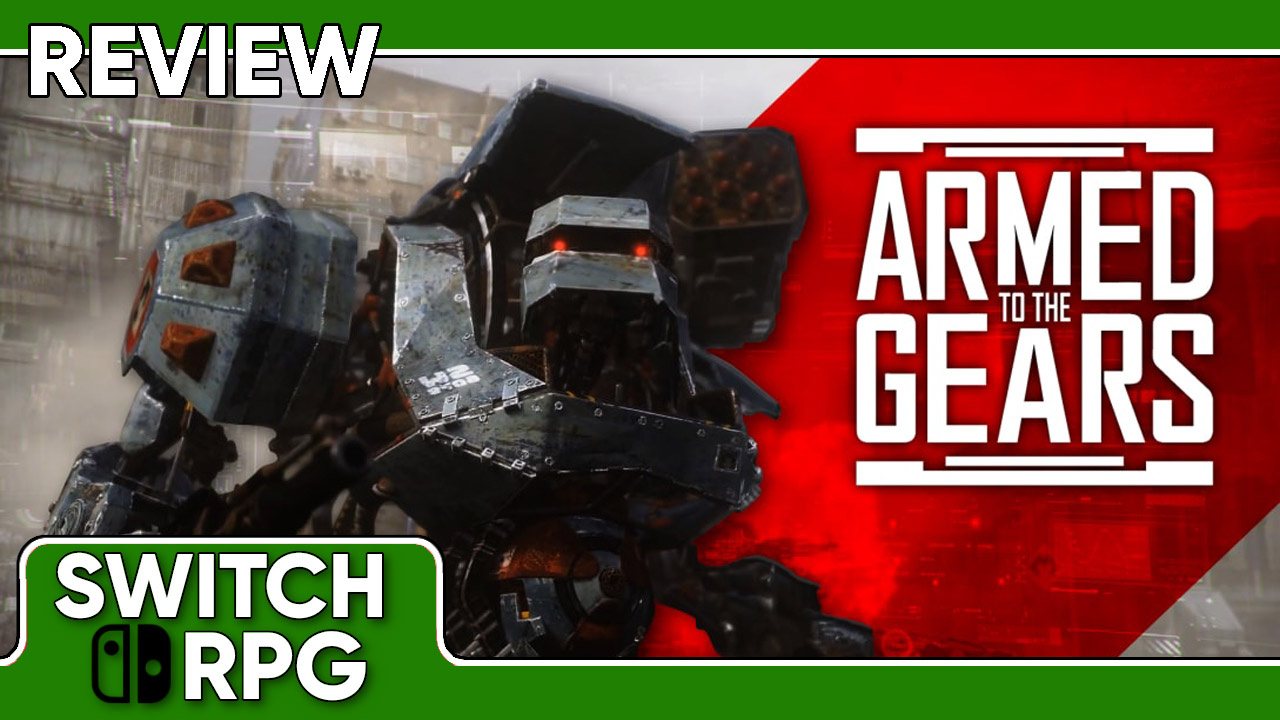 Hearing the words “action” and “tactics” close to one another is always a source of curiosity. Outside of real-time strategy, these aren’t two descriptors that tend to gel. But that hasn’t stopped plenty of independent developers from using different mechanics in order to accomplish an interpretation of this concept. What elements does an action shooter need in order to have a tactical bent? If the answer is “base building,” chances are the two genres are being slapped together somewhat haphazardly, though this doesn’t necessarily imply a lack of polish.

Except when the product lacks polish. Is this a good segue? Let’s talk about Armed to the Gears.

First off, it’s a bit disingenuous to say that Armed to the Gears is an RPG. The game has players commandeering a mech through a series of missions. Because your resources are limited, you’ll need to construct a proper base in order to create and restock some of your more powerful offensive capabilities. This requires capturing enemy command posts in order to use the collected resources to both outfit your mech and defend your conquered posts. If you’re wondering why you would want to defend your base when you’re on the offensive, well, enemies will often prioritize their outposts. This has a dual purpose, as it allows you to go on the offensive and avoid incoming troops in some scenarios, but also means you will eventually have to double back to cover your tracks. 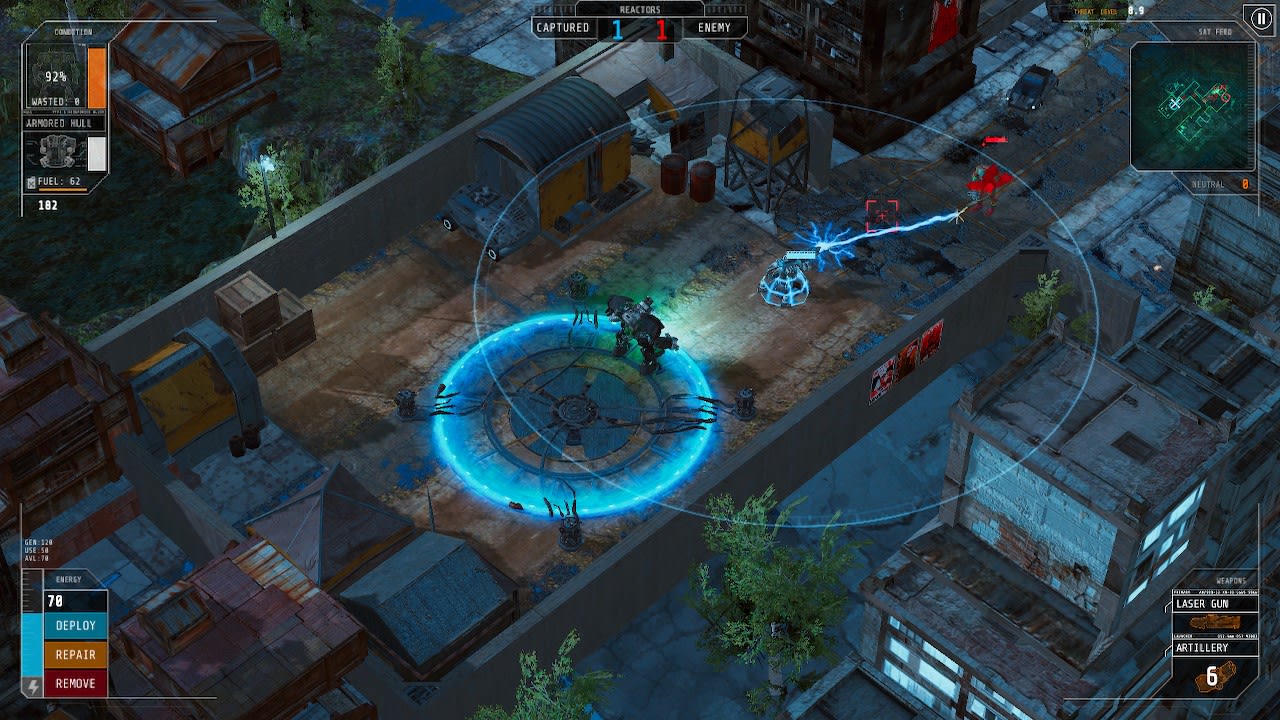 Missions usually require you to conquer and clear the map in some way, either by capturing all of the enemy command posts or building up enough resources in order to dominate some specific, well-defended enemy encampment. Because the enemy also builds units and sends them to defend or capture certain areas, you’ll need to use your own offensive capabilities as well as base-building resources in order to complete objectives. Movement is handled with the left control stick, which can be clicked to activate a thruster ability with a limited use. You can fire off your primary weapon with the ZR trigger and launch your secondary weapon with the Y button. Because of the scaled-out perspective, you can lock onto the nearest target with the L bumper, but free aim is always possible with the right control stick.

The R bumper will pull up a map that allows you to view the mission map, as well as ground you have previously covered. This can be useful for regrouping and defending areas that you have previously accessed in case your fortifications fail their duty. The minus button pulls up the build menu, which allows access to turrets, bunkers, mines, other nasty offensive tricks like carpet bombing runs, and the upgrade and repair functions. You can use the last of these two to improve previously developed structures and expand your resource count based on the acquisition of certain types of towers. Your resource count is filled by the kinds of structures you create- a basic turret will cost less than a more advanced one, and both are cheaper than a mech repair bay, which can heal your player unit. 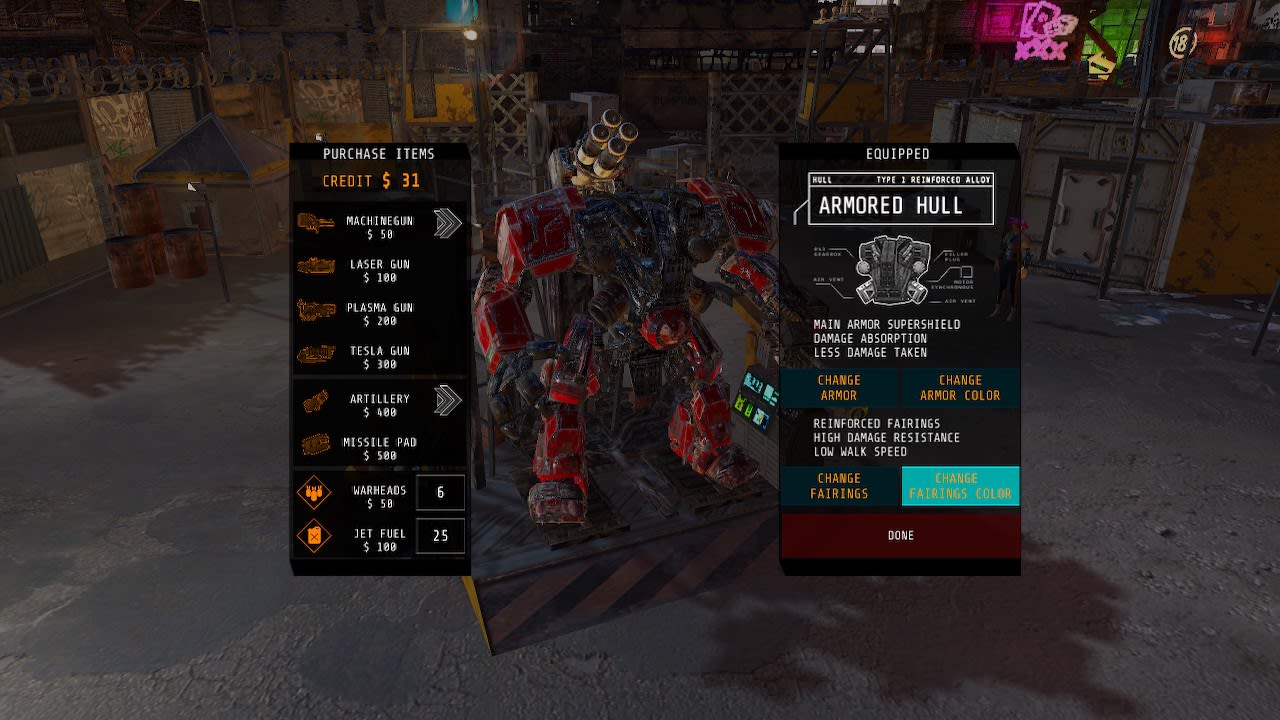 Once these resources are consumed, they can only be replenished by the destruction of a product, meaning you are working with a limited amount of currency that can leave you exposed in terms of defenses. The destruction of your turret might mean more resources, but it also leaves your command post vulnerable. It’s a delicate balance that needs to be maintained, but what helps is that most structures can be built on any stable ground, which isn’t always plentiful, but does mean you can be a distance from your command post before setting up defenses or executing offensive commands.

In terms of unique content, you are looking at six story-based missions and six defense missions, both offering slightly different kinds of experiences at three different difficulty levels. Although there is some light flavor text used to introduce each mission as well as a full backstory tab to be explored, this story serves nothing more than to set the stage and give reason for a video game premise. There are bad guys, you are a lone mech pilot with a bone to pick. Watch the sparks fly. 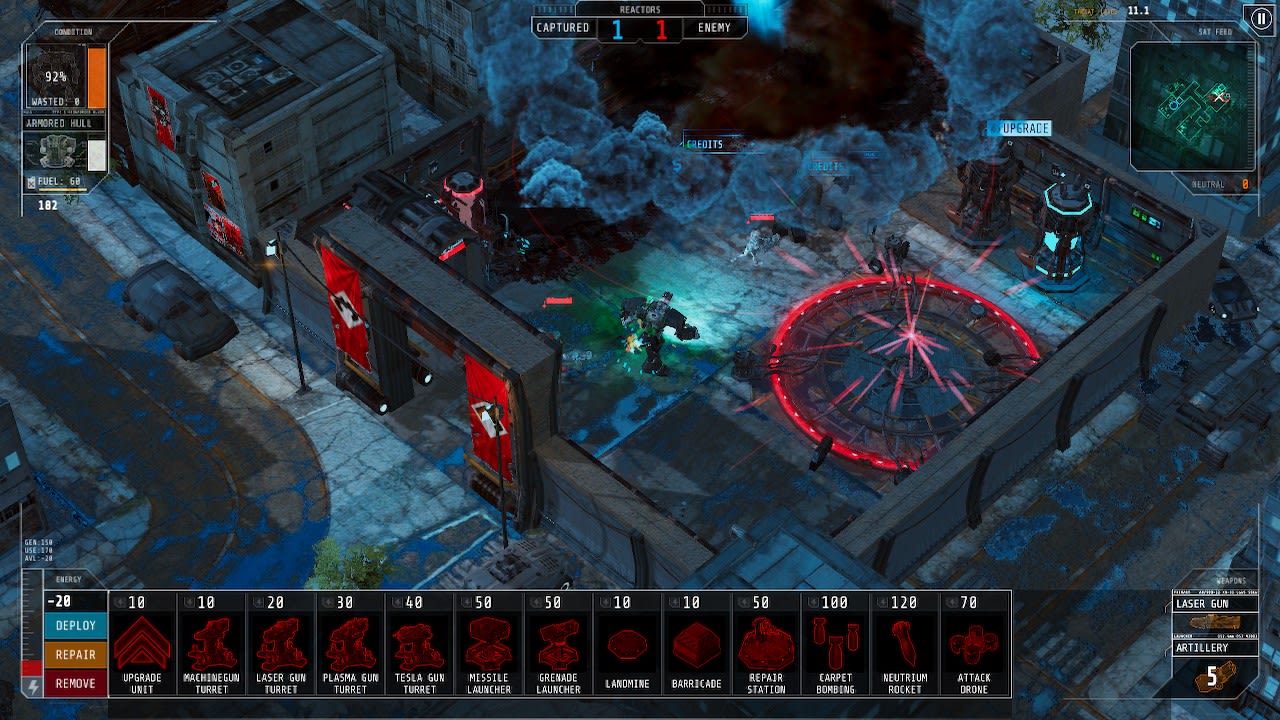 This can have a frustrating impact on gameplay, of course. Because the flavor text is so compartmentalized, it may only give you an inkling of what your actual objective might be. Considering the story missions are never extremely complex in their goal, you can probably figure out what you’re supposed to do, but it would be nicer to ground these assaults in some sort of context or logic. In any case, Armed to the Gears is more focused on delivering arcadey fun, so maybe you should just turn your brain off and enjoy it.

Aesthetically, Armed to the Gears presents a top-down mecha landscape as authentically as it can. Most of the textures are muddy or gray, meaning you won’t be wowed by an expansive palette. Where the game shines is in its destructible elements, namely the various buildings, units, and occasional set dressing that will explode into a hail of debris upon taking enough damage. Bear in mind, it is a highly specific effect, but when facing down hordes of foot soldiers or a particularly large enemy mech, seeing things reduced to a singe mark or having armor collapse and expose the mechanics underneath is fun. Every model is detailed enough to make the game feel like it is a zoomed-out view of a large conflict, and many of the particle effects are also visceral enough. What music does exist in Armed to the Gears is sadly marred by tracks glitching out and not auto-replaying, but it does fit the industrial warzone vibes the game is selling.

There are three difficulty modes to tackle for each of the game’s twelve missions, and although there are a few different types of weapons to equip and a very bare-bones mech construction mechanic that can vary your play slightly, the game’s premise is as straightforward as it gets. Completing missions grants more of the game’s currency, which you can use to equip certain weapons and restock finite combat options, but this economy rarely feels like it has any impact on the gameplay cycle. You’ll need to make your own fun via experimentation, as many of the game’s buildable strategy options don’t necessarily need to be implemented in order to complete the majority of missions. You’ll really only get to experiment with one or two strategies per mission thanks to how strict the game’s resource system is. 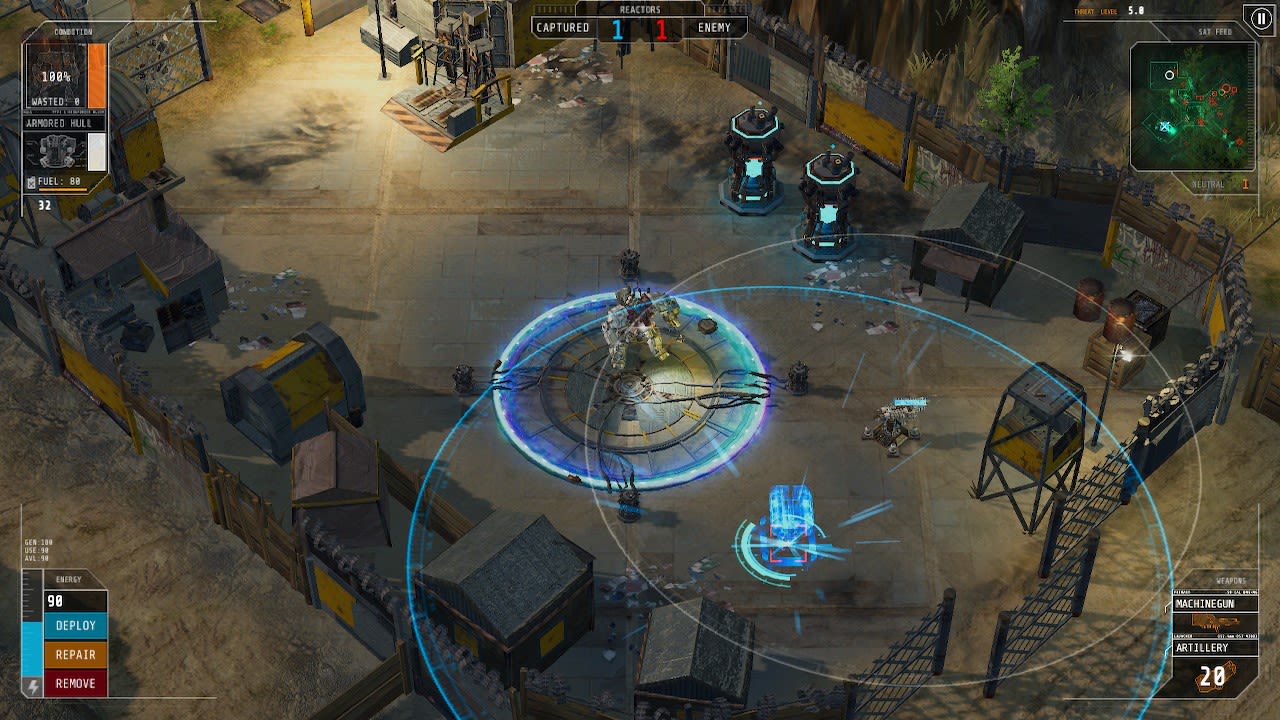 Once you’ve built a unit, you don’t regain the resources spent until that unit is destroyed, so offensive constructs, like a firebombing run, are often more viable, but highly situational. Defense options often feel like an unnecessary resource sink because you’ll be too far away to repair or rebuild them by the time you’ve progressed far enough from a defensible place. But that pushes an aggressive mindset over anything else, and there is a whole set of missions designed with only defense in mind, so both game modes do feel like two sides of the same coin.

While I did not bump the difficulty up beyond normal, the base mode of play was serviceable enough, though the sprint option being tied to a consumable resource and the construction tools operating in real-time didn’t sit quite right with the pacing of each skirmish. What the game can be commended for is that its tactics options do feel essential to the experience, if only because the playable mecha is too weak on its own to sustain itself in direct combat for more than thirty seconds. However, the game offers little variety in enemy design and scenario construction throughout its campaign, most of which can be completed in the span of around three to four hours.

If you want to go back and try missions on harder difficulties and try to unlock more of the in-game achievements, there’s enough here to warrant its price of entry. Armed to the Gears plays perfectly fine, but it’s a shallow experience that offers exactly what it markets without any frills, bells, or whistles. If you want to destroy a whole bunch of stuff, there are worse mechs that you could board.