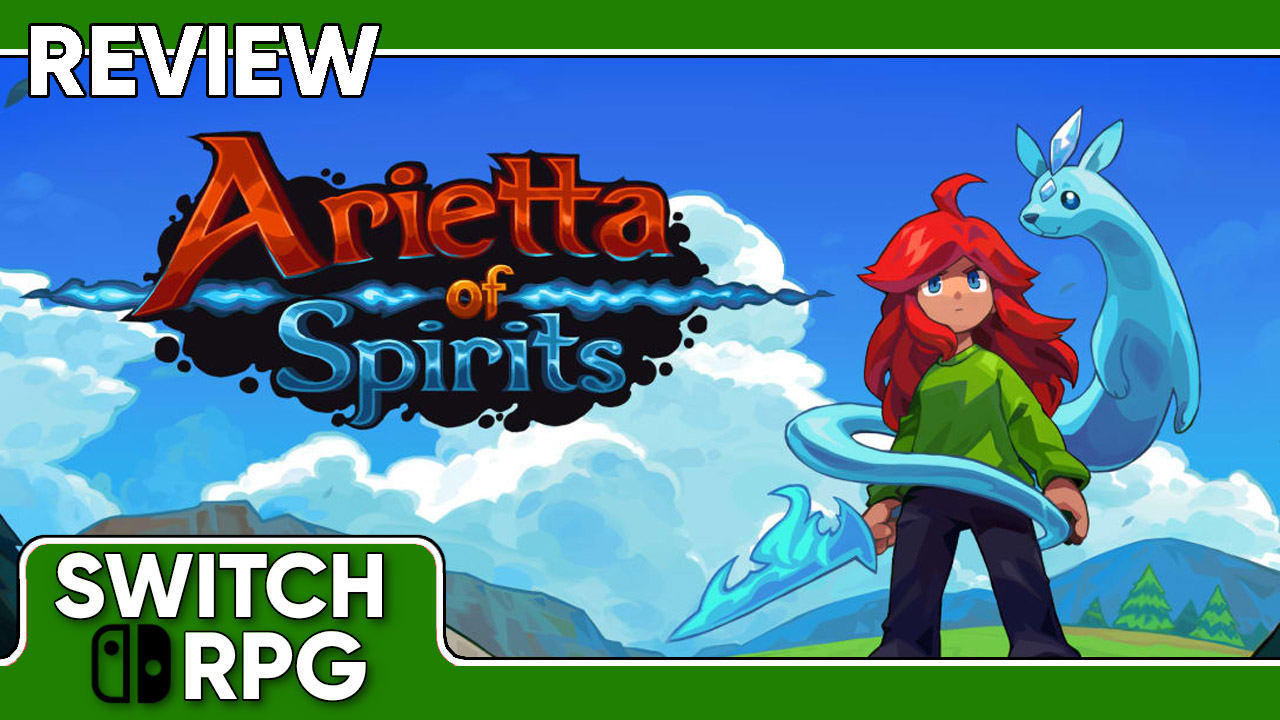 Arietta of Spirits is the gorgeously pixelated action-adventure debut from indie developer Third Spirit Games. It was a release that flew well under my radar until the demo appeared on the Nintendo eShop only days before its August 20th launch. A top-down, narrative-rich, 2-D adventure game with combat in the mould of classic Zelda? Count me in! So, having now completed this charming little tale, how does it fare? Let’s talk about it. 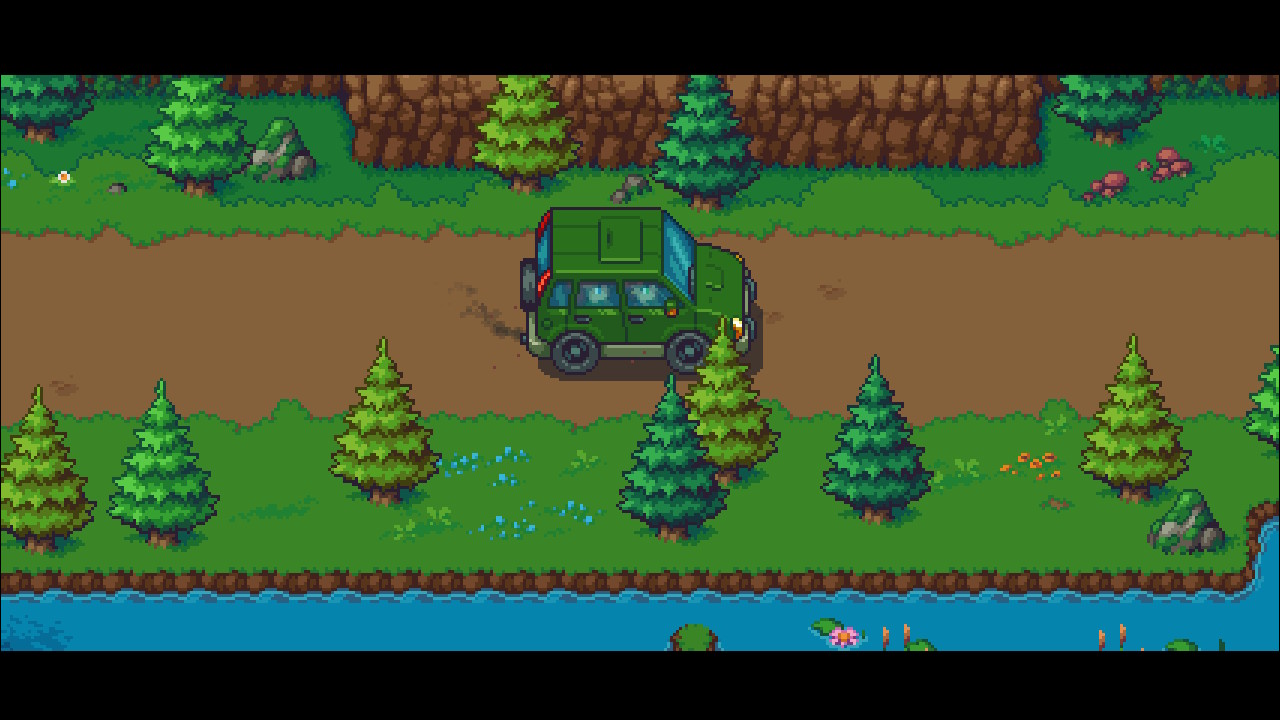 In the opening cutscene of Arietta of Spirits, twelve-year-old Arietta (‘Arrie’ for short’) and her family are seen driving along a country road, intending to spend their summer vacation at Arrie’s grandmother’s cabin. Located on an island populated only by squirrels, birds, and deadly wasps and bats!—or so it seems!—it is the family’s first return visit since Arrie’s grandmother tragically passed away. Arrie soon learns that the toy wooden sword imparted by her father as defense against the island’s predatory vespids is a ‘Conduit’ that connects her to another realm: ‘The Spirit Realm.’ What’s more, after Arrie is joined by Arco, her weaselly-looking ‘spirit guide,’ she discovers another peculiar aspect to her newfound sixth sense… She can see dead people! 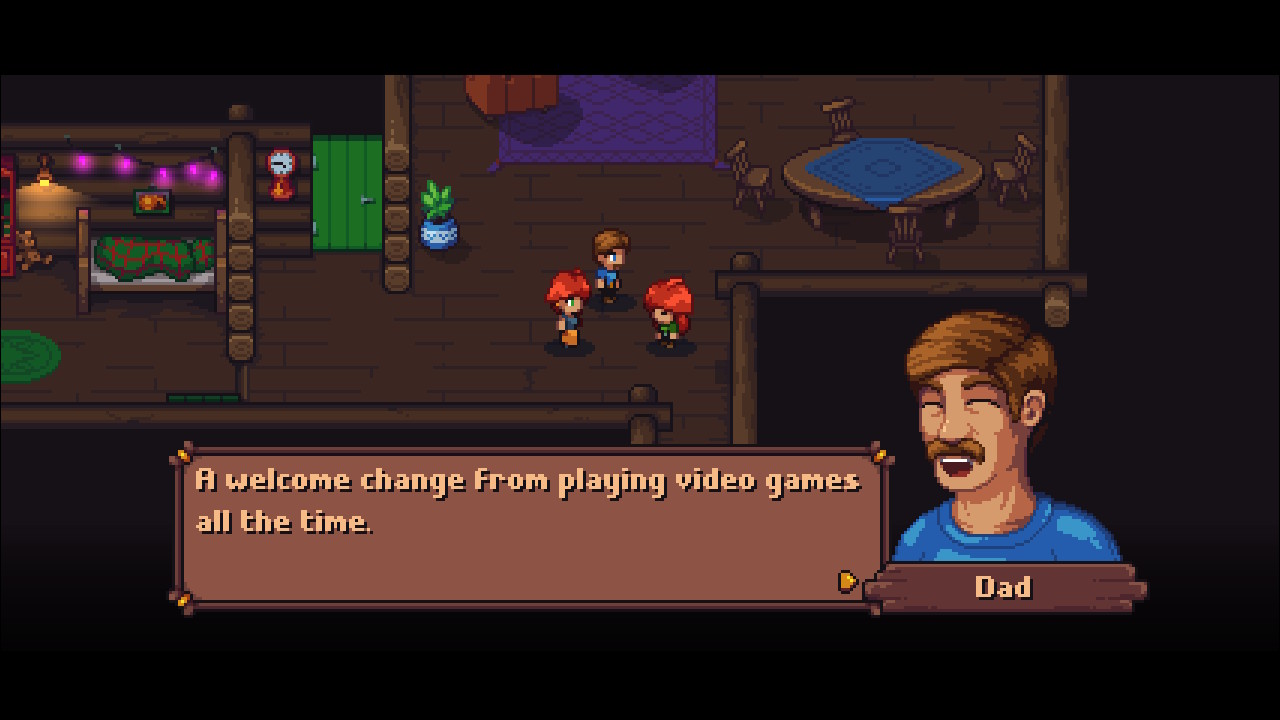 The plot of Arietta of Spirits revolves around unearthing the island’s unsavory history and helping spirits trapped between the present life and the hereafter resolve their outstanding problems so that they can peacefully proceed on to that eternal sleep. It’s a heartfelt story with a surprising amount of depth, made all the more fascinating due to the fact that at the heart of Arietta’s dualistic universe lie malevolent spirits, beings that thrive off the misfortunes of humans and stand in Arrie’s way as she attempts to put the island’s lingering doppelgängers at ease.

Gameplay in Arietta of Spirits will be familiar to anyone who has played their fair share of vintage action-adventure games. The Nintendo Switch has more than a few of them, and fans of either one of the retro Zeldas or the indie marvels CrossCode and Blossom Tales (some of my personal favorites) should feel right at home here. Aside from a smattering of upgrades that Arrie receives throughout the duration of her family’s brief rendezvous at granny’s cottage, combat is a tango that primarily hinges on precision. While Arrie and enemy sprites can move across maps diagonally, the directionality of Arrie’s sword attacks is restricted to up, down, left, and right, causing me more than a few missteps whenever I ever so slightly misjudged the position of my target or the range of Arrie’s sword. As well, Arrie has a tendency to bounce off objects whenever she strikes a tree or boulder or gets walloped by a foe, causing her to stagger for a moment and leaving her vulnerable to further assaults. 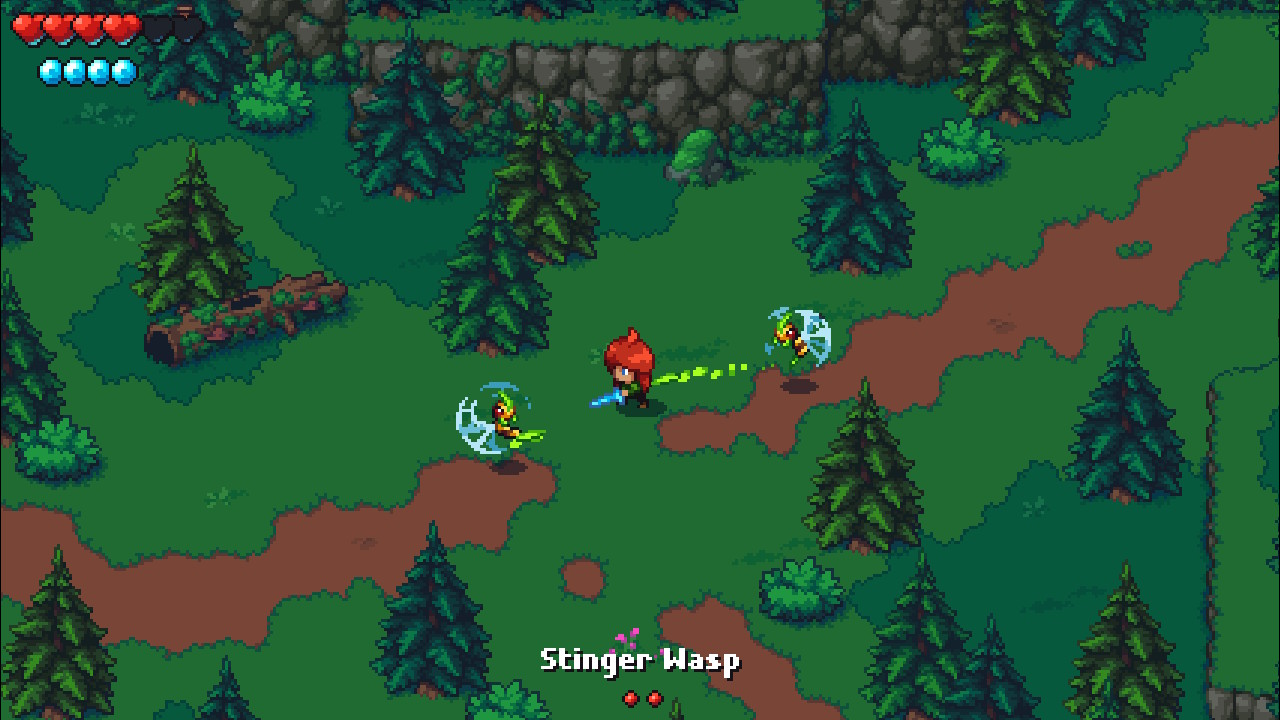 My main complaints concerning gameplay are that Arrie is apt to get stuck on walls too easily, and when she is free to lash out in open space, the ‘tight reaction-based combat’ that Third Spirit Games has lauded simply feels cumbersome. I’m not denying that I still found Arrie’s exploits on the whole enjoyable, especially on account of the manoeuvres enemies use and Arrie’s agile roll which is, at the outset, her chief means of avoiding damage. However, when I compare it to some of those premiere action-adventure titles already mentioned, which feature battle sequences that are nothing if not fluid, Arrie’s lumbering reaction time when swarmed by unrelenting bats and slimes, or the projectiles they occasionally sling, often struck me as feeling a tad bit unpolished, even obnoxious.

Those issues aside, the pacing of Arietta of Spirits is done well enough to keep anyone engaged throughout the duration of its 3-5 hour playtime. Although the gameplay lacks variety, the bulk of Arrie’s quest consisting of hacking and slashing her way through fairly linear paths to fetch items for this or that person, there are a few satisfying upgrades to be collected along the way. One example is the ‘Spirit Shield,’ a protective barrier that can be employed for several seconds until Arco, Arrie’s companion, runs out of energy and needs time to recharge. This shield, together with Arrie’s attack, roll, and the directional buttons, forms the whole of Arietta of Spirits’ straightforward control mechanics. 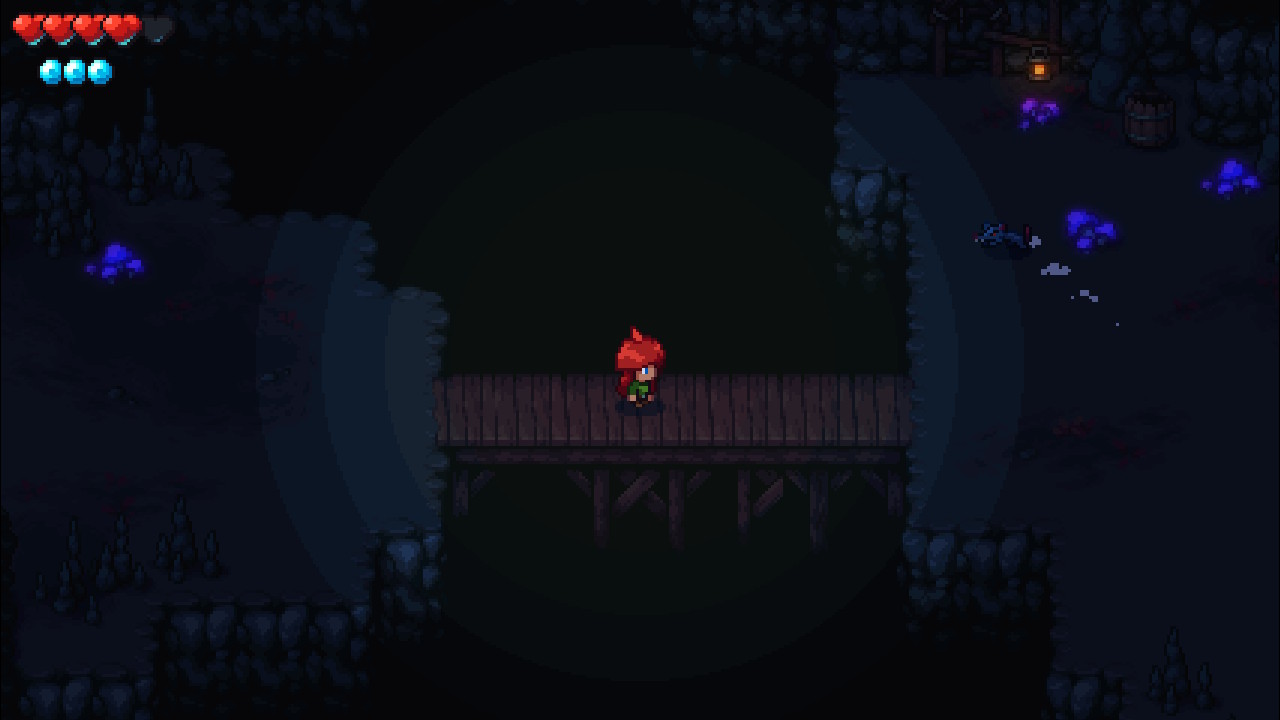 Another cool set of items that Arrie acquires are the ‘Roamer Cores.’ The evil spirits that Arrie must fight are called Roamers, and when players have a Roamer Core, every kill earns them points that go towards filling up the Core. When the prerequisite threshold is reached, Arrie is rewarded with an additional heart container on her health bar (perhaps where Arietta’s similarity to a franchise like Zelda or a game like Blossom Tales is most apparent). I found it to be a neat concept in that it makes enemy encounters, at least against Roamers, seem more meaningful, and also creates a sense of grinding for EXP and enhanced character stats without using the language or technique of your typical RPG.

Optional tasks include helping an NPC recover some missing valuables scattered about the islet, while another has Arrie searching for twenty hidden ‘Spirit Cubs’ that have been separated from their parents. Although Arietta of Spirits’ world is neither too large nor open-ended so as to cause you to lose track of your whereabouts, having to backpedal across different areas without the aid of a map can be somewhat of a nuisance. There aren’t any puzzles or dungeons in Arietta to speak of, hence, outside of monster slaying you’ll pretty much be doing fetch quests to progress the narrative, power up Arrie’s Spirit Shield, or unlock all twenty-nine of Arietta’s ‘Awards,’ i.e. the game’s achievement tracker.

Finally, Arietta of Spirits offers three difficulty settings out of the gate—Easy, Normal, and Hard—and a fourth ‘Extreme’ mode (one-hit-deaths) that becomes available once you’ve made it past the final credits. I opted to run through the game on ‘Hard,’ priding myself as a decently experienced adventurer. I died often but no confrontation was so brutal that it couldn’t be overcome after a few attempts, and fortunately, defeat only sends Arrie back to the last auto-save/checkpoint, which occurs every time she enters onto a new screen. Thus, should you fail to vanquish an adversary, it never takes more than a minute or so to get back to the previous point at which you fell. I can at least respect a developer that respects my time, and Arietta certainly does that. Regrettably, this also means that the journey concludes far too soon. Just as I was really beginning to connect with the characters and their roles in the grander scheme of things, it was all over. 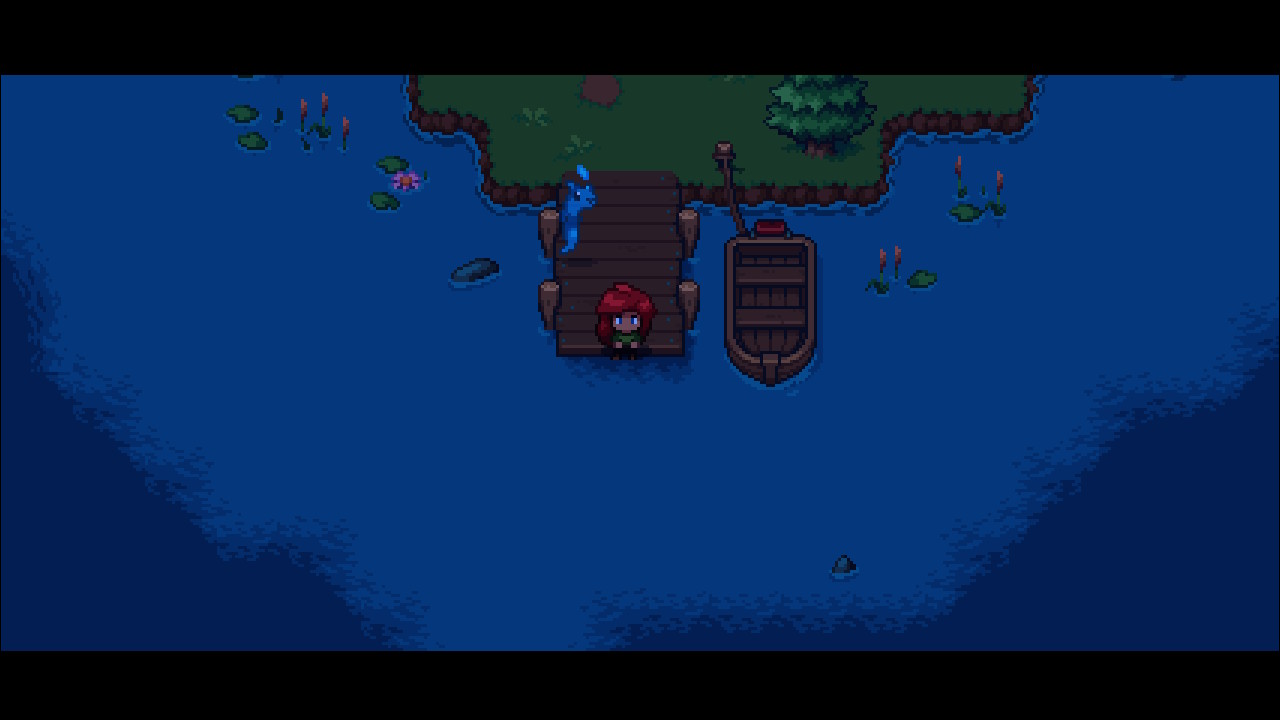 For me, the best aspects in the time that I spent with Arietta were its visuals and accompanying soundtrack. I’m a sucker for scrumptious 16-bit pixel art and Arietta of Spirits roundly delivers. From the turning hands on a mounted wall clock to a rowboat gently swaying in the sea, the minute details that Third Spirit Games put into creating this vibrant little world shouldn’t be underappreciated. To be sure, the scenery is limited to forests and caves, most of which begin to feel a bit overused, but it’s tolerable because every sprite design looks so colorful and rich and moves with finesse in equal measure.

I also found myself stanning the music. Each track is simple yet refined. The piano takes front and center in many of the songs you hear throughout Arrie’s escapades and, coupled with some wonderful melodies, produces an air of coziness that perfectly matches the tenor of the game’s beautiful settings. Arietta of Spirits’ soundtrack is one that I fully intend to revisit every once and awhile, even if the game is not.

Arietta of Spirits has its moments. Its narrative is sweet, at times provocative and humorous, and its presentation is everything I could hope for from an action-adventure game modelled after the golden years of the Super Nintendo. Still, I’d be lying if I didn’t acknowledge that its combat and overall duration left me largely unsatisfied. With this in mind, and given its $20 price tag, it’s hard for me to recommend with so many more substantial offerings currently available on the Switch of equal or lesser value. Unless you’re absolutely desperate for an old-school adventure title featuring real-time combat and don’t mind the fact that Arietta can be beaten in a single sitting—in which case, I think you’ll be pleased enough to feel as though your purchase was justified—you’re better off waiting for a significant discount. Or, for those reading this within the first two or three weeks of its release, you might just want to hold out for Eastward.

I played the demo and I agree with your assessment. I found the combat clunky and unsatisfying to play, so not going to pick this one up.