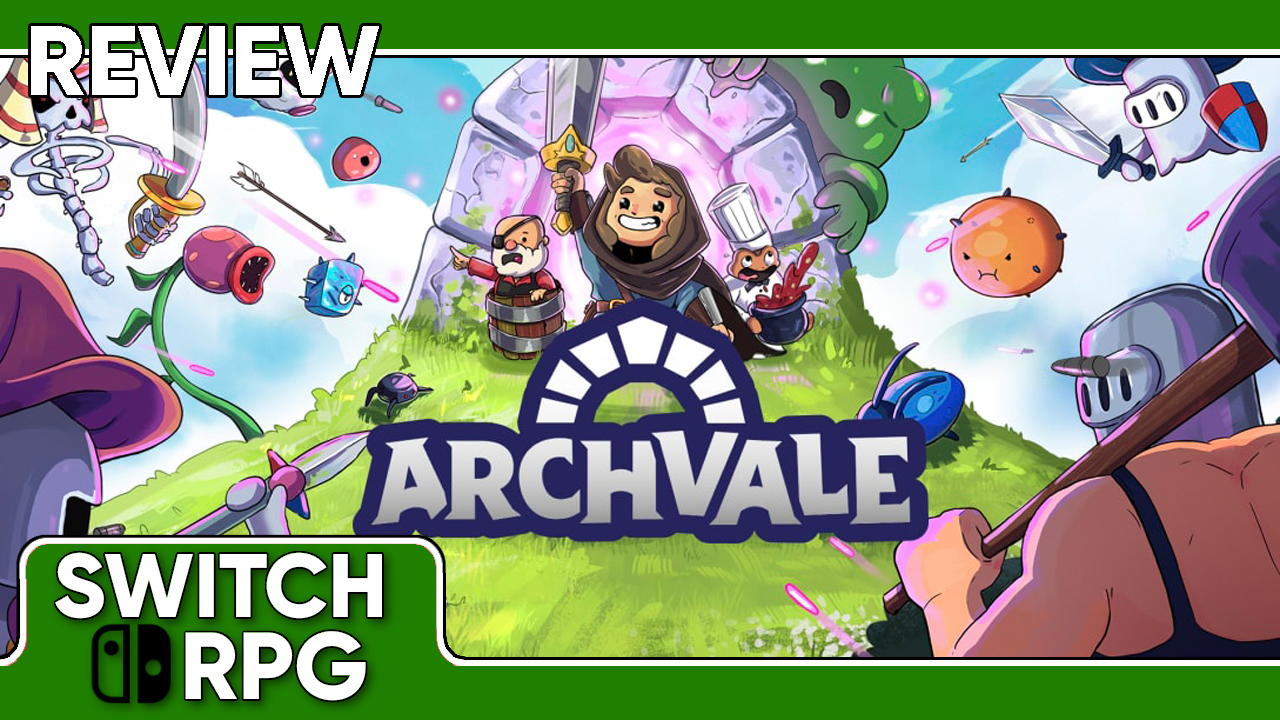 Do you like traditional top-down, 2D Zelda games? What if you swapped the combat system for a twin-stick shooter design? How about adding an array of loot and lots of weapons with varying stats, crafting, and customization, a la Borderlands? If you said “yes” to all three, then you clearly want a twin-stick bullet hell, Zelda-inspired adventure game with a plethora of loot, right? Fortunately, Archvale is here to fill that itch. But just how good is this genre mashup? Let’s find out! 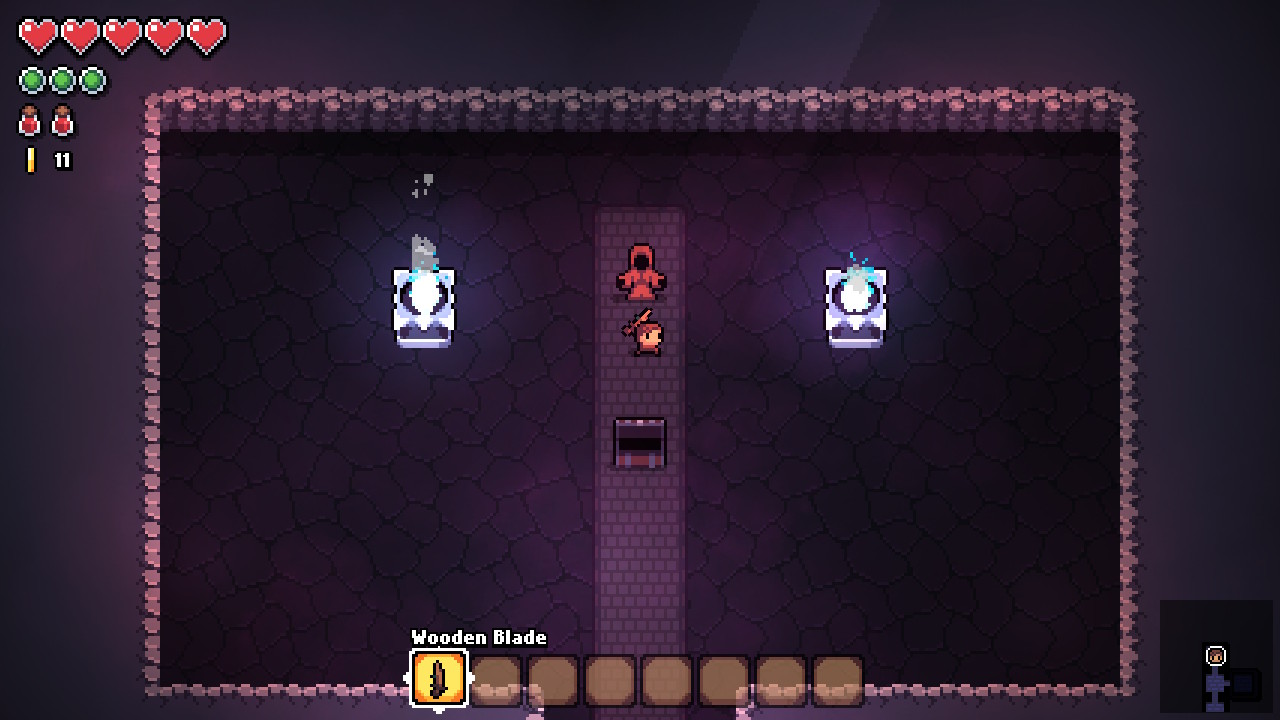 Archvale isn’t big on story – it’s there to keep the game moving along and present you with objectives – but let’s take a look at what IS present. You assume the role of the Hero, who is tasked to hunt down the six arch stones to rebuild the arch and vanquish the cruel king that has terrorized the land. It’s very straightforward and to the point and really just there just to give the game some life. Sadly, I would have liked to have seen a bit more depth to the story and lore, but that isn’t to be had aside from a few brief conversations with an NPC or two located in one of the game’s villages. 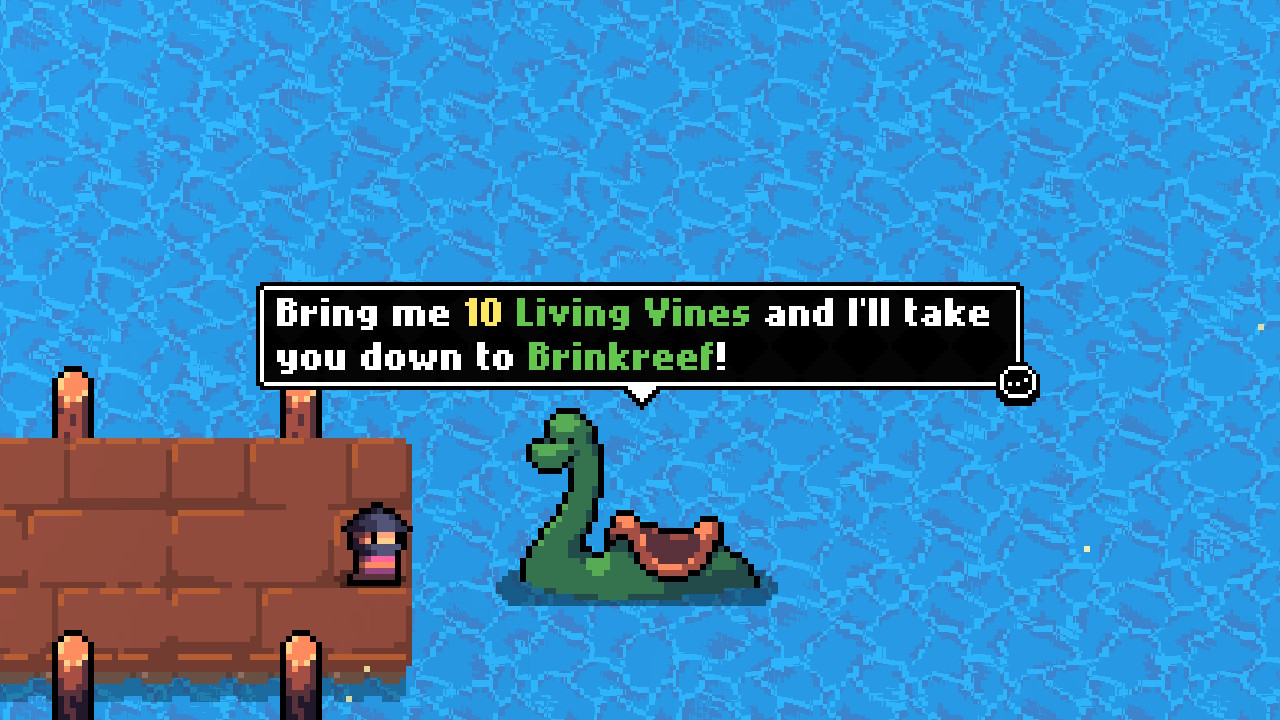 Archvale opens with our Hero having to complete a tutorial dungeon, which teaches the game’s basics; attacking, traversing, dodging, healing, and equipping items. After that, the game randomly generates a map for you to explore with six arch stone locations marked on the map. The direct path to them isn’t 100% displayed to the user unless the stone is within the current area. As you enter new areas the map will reveal itself, showing you the various routes you can take to reach the stone, which are located within the game’s dungeons. The map will also mark fountains and upcoming tiles with a question mark if there is a key item or mini boss fight located within that tile. The map is broken into tiles, or rooms, you must clear out all the enemies within a room or complete its puzzle to move on to the next. 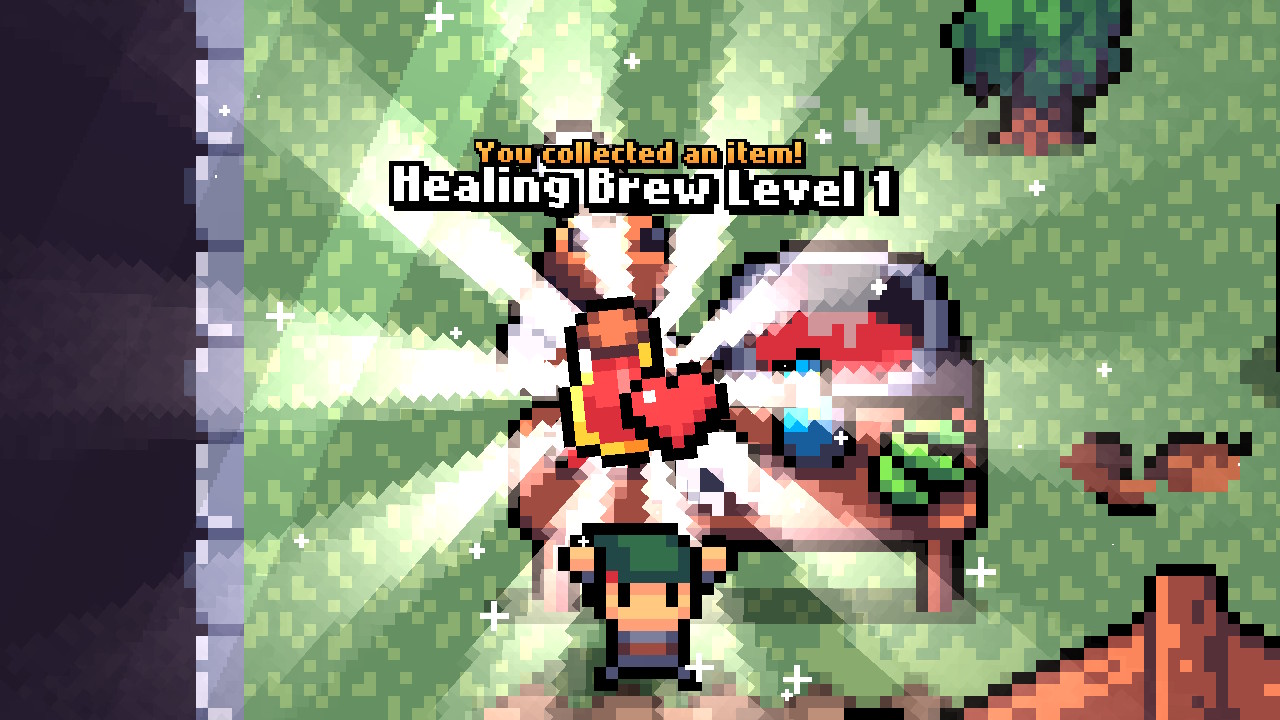 Combat is pretty standard twin-stick/bullet hell fare, especially when specifically using two of the game’s three weapon types – ranged and magic – but there is also melee. New weapons can drop from an enemy, be crafted in a town, or found within a chest. As you explore rooms (not inside dungeons) you will come to large rock masses and if you break these apart, you will collect materials you can use in the town to craft weapons and armor. In addition to crafting, the towns have a few NPCs that add a trivial amount of lore and backstory to the game. You can bring the items the chef is looking for and he will increase the effectiveness of your health potions. Aside from crafting, you will find a shopkeeper where you can spend gold to buy items rather than having to craft them. Conversely, the blacksmith can upgrade your current weapons, turn in gold items to the collector, or store your money in the bank. 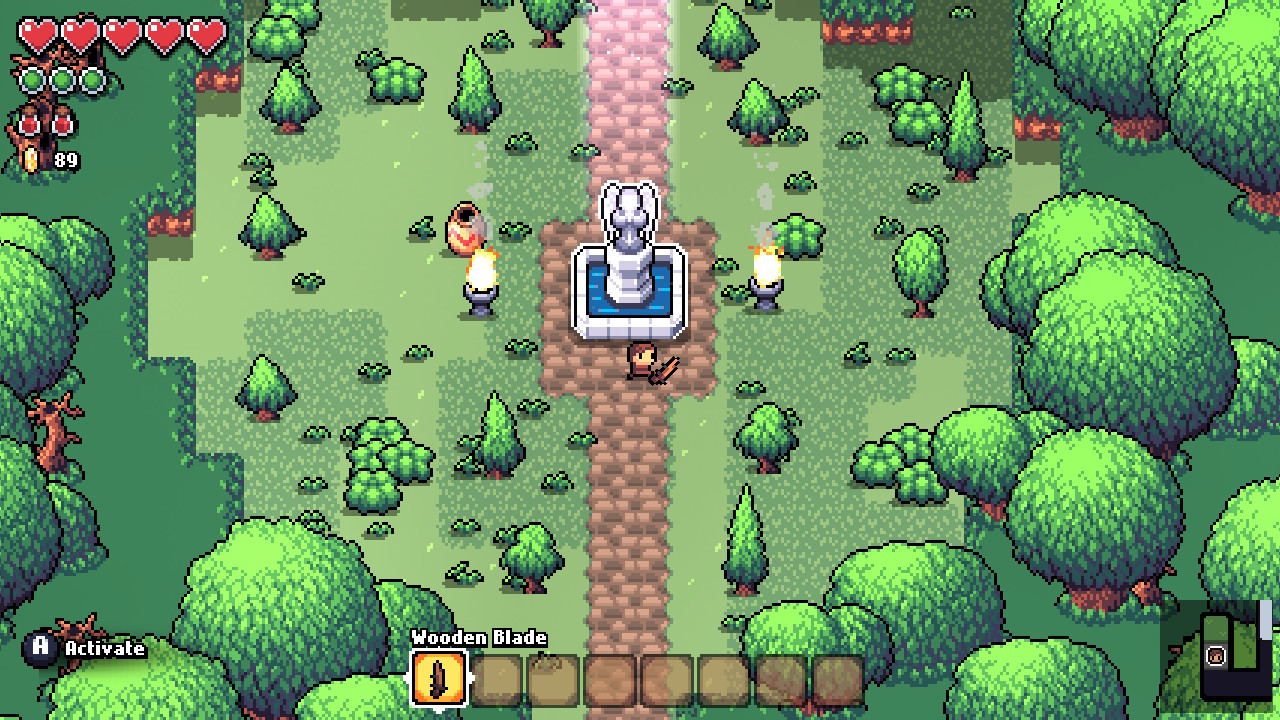 When you die, you lose a percentage of your gold. You can fast travel to the town or any other fountain you have interacted with. Fountains are all over the map and act as a respawn point when you die, and a way to heal at the cost of having any room you cleared having their enemies respawn. In addition to those features, the first time you interact with a fountain you get an upgrade to your overall defensive skills. I am not totally sure what these boosts did as I found the game to be not very clear regarding your characters overall attack and defense stats. I was able to manage and compare weapon stats and see my health via the number of heart containers I have acquired or gained via badges.

Speaking of badges, from the inventory screen you have areas, one which allows you to manage the resources, weapons, armor and rings you have collected and another allowing you to enable a selection of badges to give your character some additional perks. This is a very similar system to that found in Paper Mario where you have a lot of badges to choose from, each using a number of points and you are limited on the number of available points. This mechanic allows you to tailor some of the experience to your play style. 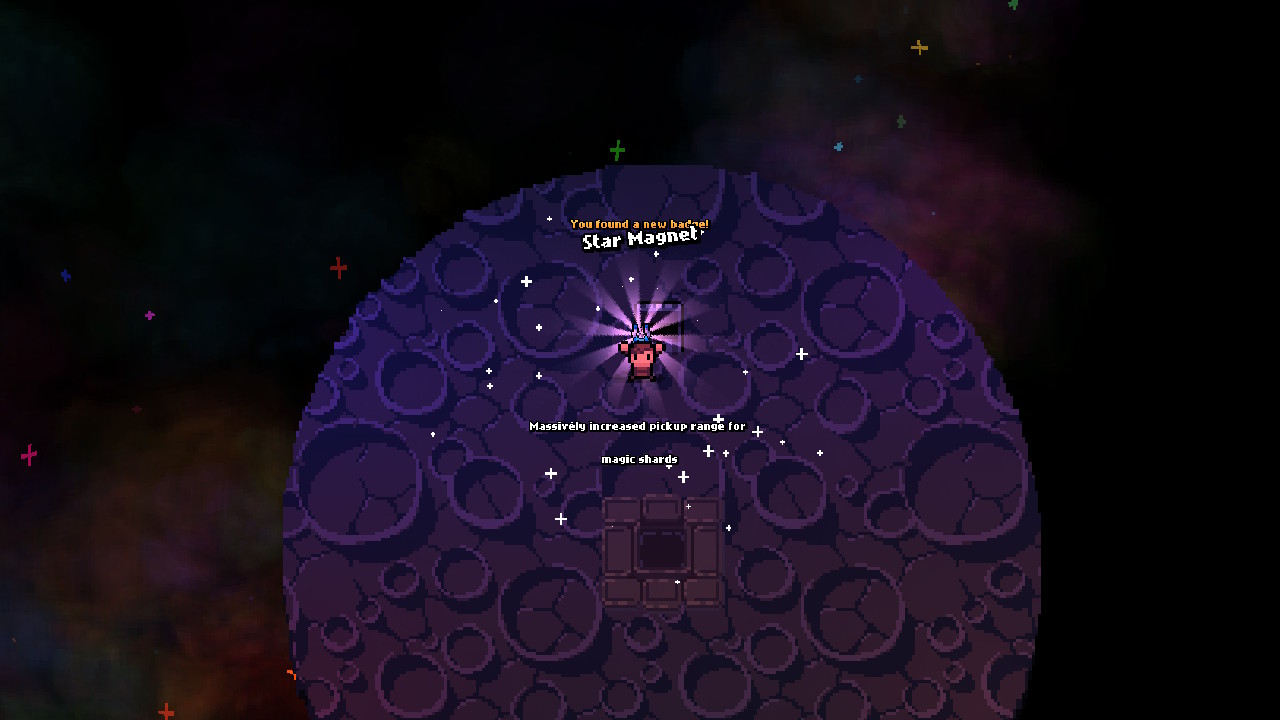 As you are exploring the overworld, you will run into certain rooms that have boss-like encounters which will reward you with a badge, weapon, and/or a heart container. Other times, you will find rooms with a portal that will take you to a challenge area. These challenge rooms place you on a circle where you must just dodge projectiles for 3 waves, each getting increasingly more difficult. Completing them rewards you with a badge or weapon. 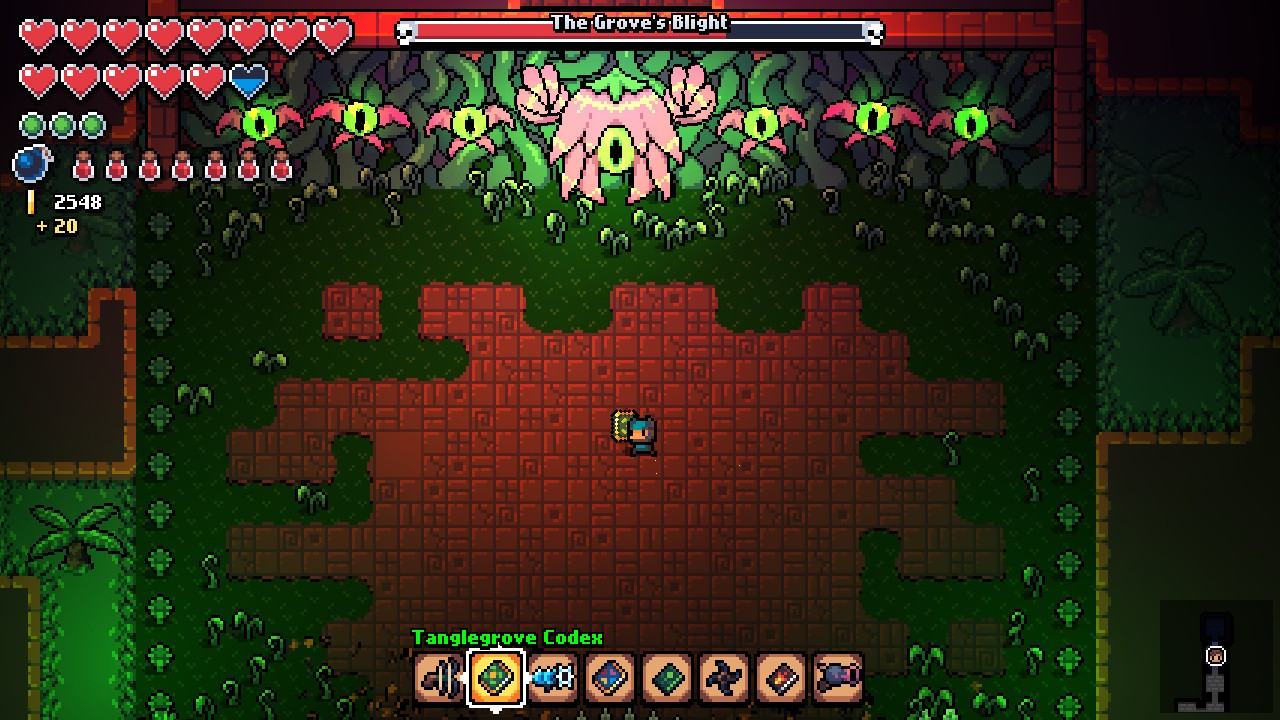 The game opens with you in a tutorial dungeon and a lot of the game you will be traversing dungeons as you work to complete your quest of finding all the stones. Each stone is within a dungeon which you get after defeating the dungeon’s boss. Getting to the boss is not always an easy task, however. These dungeons will require you to hunt down keys which open various doors and allow you to progress further. Dungeons for the most part work the same as the overworld – clear the room to move on to the next, etc – only the dungeons have some rooms which are entirely traversal-based (which can sometimes be a pain).

I felt these were added to break up the flow and have something besides combat, but sometimes I felt their addition to the game was doing more harm than good. Once you make it to a boss, though, this is where Archvale shines. Boss battles are big and lengthy, with bosses having several phases and moves that cover the room in projectiles and send them in all directions. This will really test your mobility and dodging skills, but finally defeating them is very rewarding. If you do lose to a boss, Archvale generally positions checkpoints nearby so that very little progress is lost. 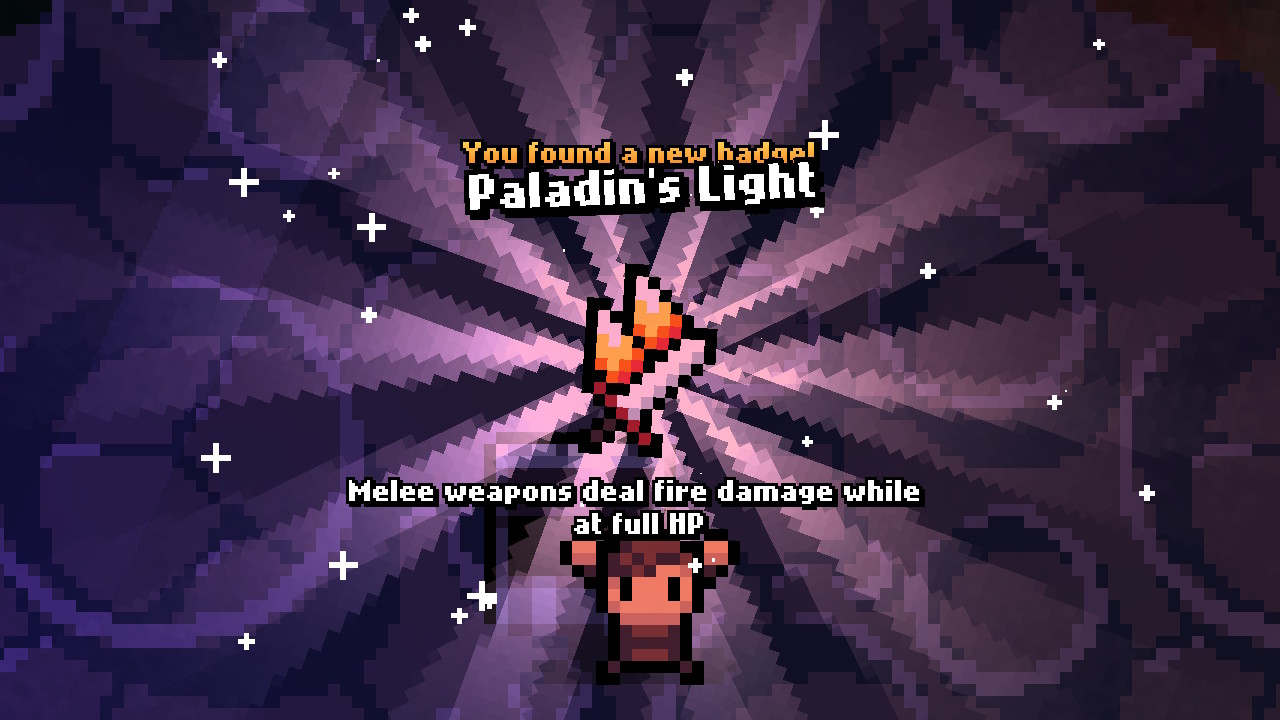 Where the story is lacking in depth, Archvale makes up for it in the visual and audio department. Archvale utilizes a 16-bit art style that for the most part runs at a solid 60FPS. There were a couple occasions where I noticed the framerate dip when a lot of projectiles were covering the screen during a boss fight. While the art design of each biome may look simple and crisp, I feel this works in favor of the design, allowing the player to easily see all the mayhem occurring on screen and help in avoiding incoming damage, as well as when to go on the offense.

While promotional material surrounding Archvale really had me hyped to play the game, I ultimately felt a bit let down. I think this is primarily due to the repetitive nature of the gameplay loop and a lack of any sort of meaningful story content. I played the Archvale on normal, and for the most part didn’t have too much difficulty progressing through the game’s various labyrinths and hunting down all the stones. A few times, I felt I wasn’t supposed to be going after a certain stone yet as when I entered the area, the enemies were too strong.

Maybe I just didn’t have a strong enough build between weapons and badges, but the game doesn’t really direct you or guide you on where you need to go next (aside from the aforementioned stone markers). While there doesn’t appear to be a set order you need to collect the stones in, I feel like there actually might be and the game just doesn’t convey that. Overall though, the combat is fun, but I found myself getting accustomed to one type of weapon – magic – and sticking with that for most of the adventure. 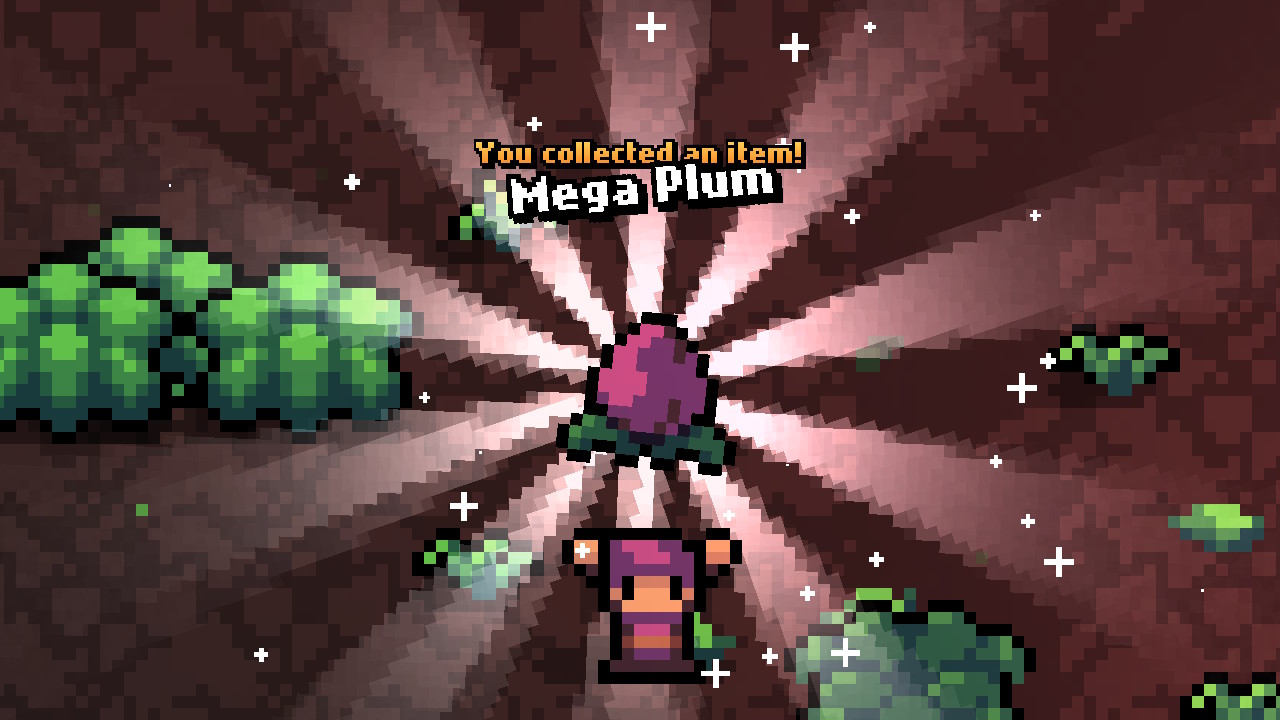 While the interesting and unique formula of Archvale undoubtedly looks nice on paper, the end result somewhat misses the mark. Hopefully the team can use this entry as a building block for their next game and add depth to the story, more character customization surrounding the hero’s stats, and improving the inventory system (with the ability to easily sell unwanted items). As it stands, Archvale does succeed in its unique genre mashup, but not overwhelmingly so.