SwitchRPG recognizes that trace RPG elements can be found in virtually every game out there, which is why you’ll often see us covering titles that aren’t necessarily pure-blooded RPGs. Most of these titles, fortunately, do end up having some semblance of RPG elements within, but others, like Ancestors Legacy, fare a little worse in that regard. Ancestors Legacy is not really an RPG but is certainly a respectable real-time strategy (RTS) experience.

Look, who’s really counting all these not-really-an-RPG titles that we review here at SwitchRPG? I’m not – fun games are fun, and we can firmly place Ancestors Legacy into the category of “fun games”…mostly. Let’s take a deep dive into the bountiful RTS, Ancestors Legacy, and discover what makes it a good, yet excruciatingly tough, experience.

RTS games are all about managing units, collecting resources, and expanding bases. Ancestors Legacy is no different in that the majority of your time is spent attempting to accomplish each scenario’s primary and optional objectives through effectively managing various resources. The scale of objectives varies widely – everything from escorting war supplies, to the more typical full-on base wars are found within Ancestors Legacy. The majority of these scenarios somewhat evolve over time, with each subsequent objective building upon the actions and storyline of the previous one. Get ready to be betrayed and fight with those you were once allied with — some of the scenarios are a real trip! 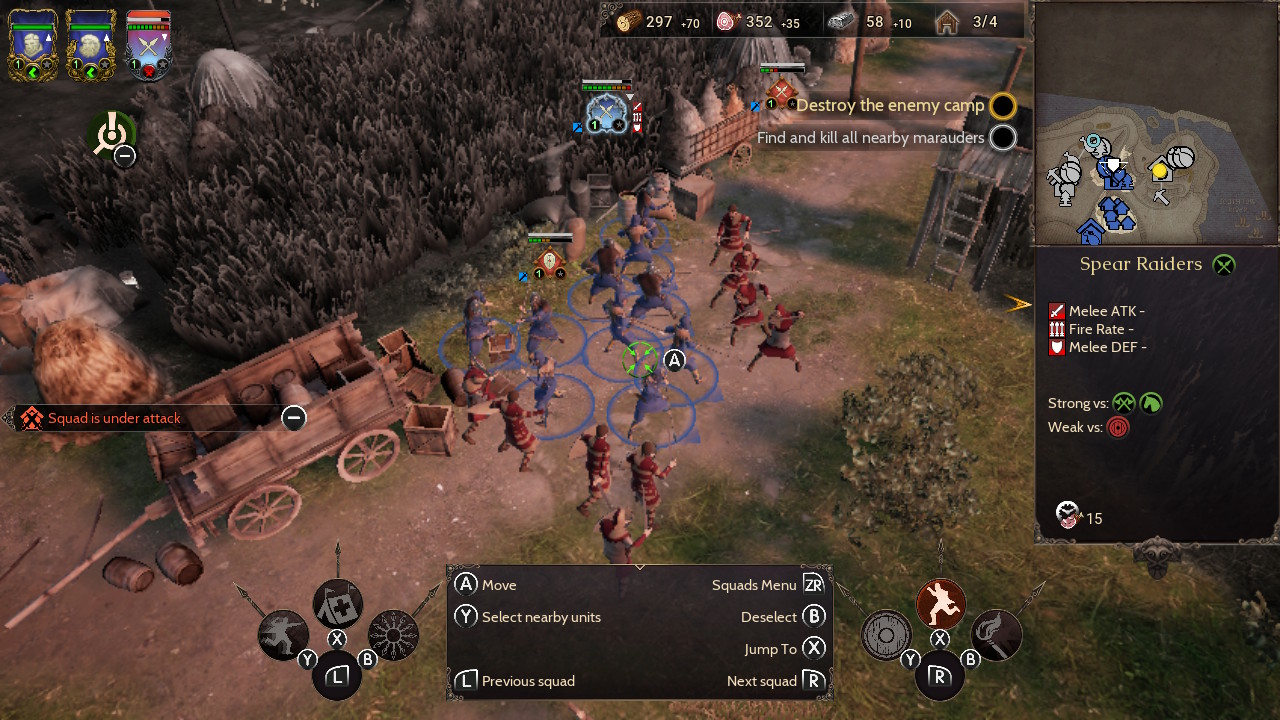 While I was only able to play through two of the four nations available in roughly 20 hours of playtime, this was more than enough time to conclude that each nation feels unique and has its own strengths and weaknesses; so much, in fact, that it definitely feels like you must relearn tactics and use different forces from one nation to the next. One nation may have stronger ranged attackers, while others may have stronger defensive units, for example.

I wouldn’t call Ancestors Legacy easy. It definitely has a bit of a learning curve until you adjust to each unit’s strengths and weaknesses, and those aren’t 100% straightforward, either. You may take your horse-riding unit and attack a group of archers – they have a weakness to these types – and still walk away losing. It will take some time to get used to these nuances, and even then, it feels a bit unnatural. Maybe it’s a bit of a balancing issue, but I feel it’s due more to each nation’s unique army types coming into play. Just admit it, your “horsies” just aren’t as powerful as archers, sometimes. 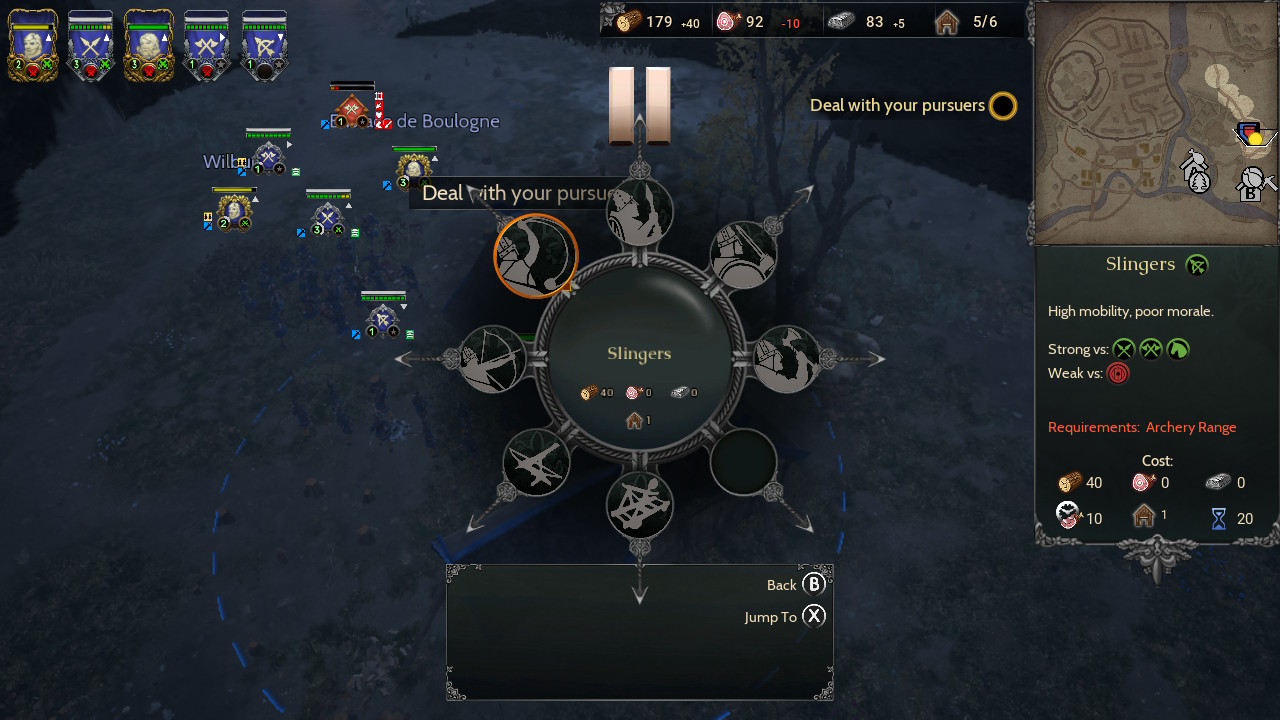 Ancestors Legacy has a bit of another quirk, as well. After your units are in battle, the only way to redirect them is by having them retreat. Retreating will cause them to disengage and run towards your base. After a few seconds, you are able to issue them new commands again. This feels very opposite of most RTS games I’ve played in the past, but really feels like it fits this era of axe-throwing barbarians, longbow archers, and catapults. While the basics of an RTS largely remain the same from game to game, how you manage such a game more typically suited for keyboard controls, with a controller, is really where Ancestors Legacy starts to shine.

Just thinking about controlling an RTS game with a controller is enough to make me want to run in the other direction and play something else, but this is entirely not the case with Ancestors Legacy. It does a superb job at giving the player full control over the battlefield via easy to access base building menus, hotkeys for armies, and quick selection abilities. 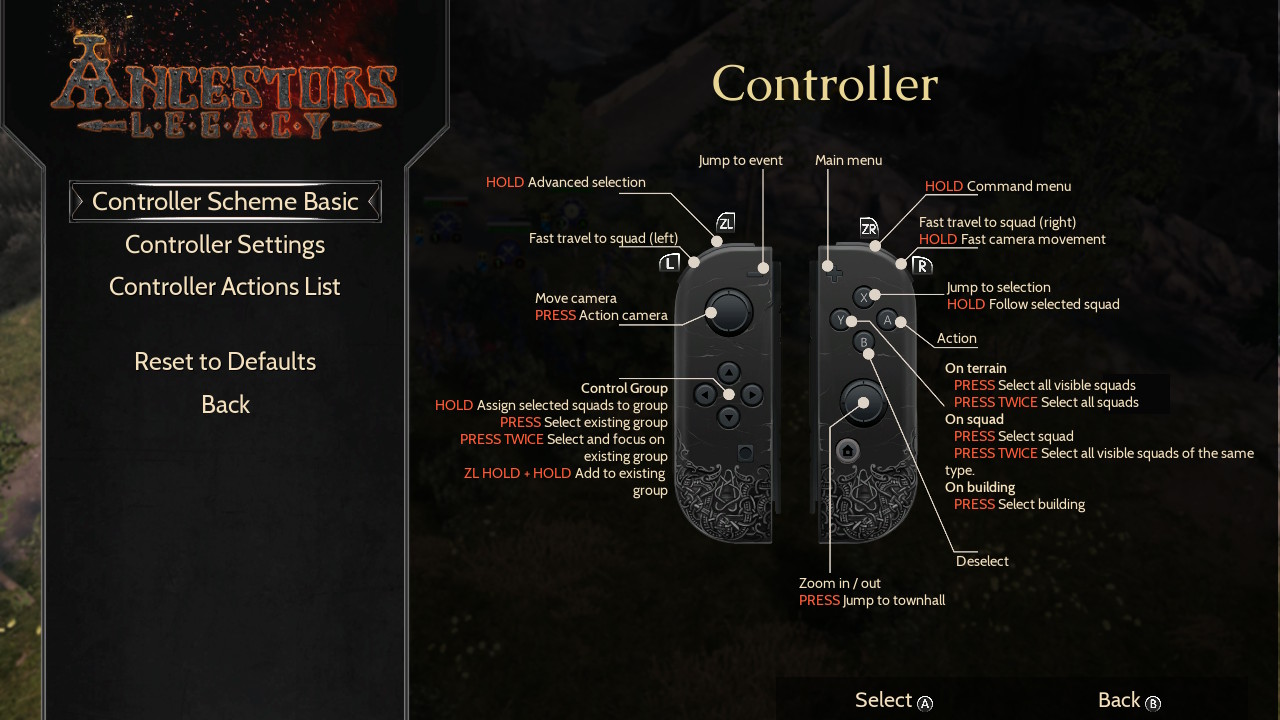 All of the usual base building, technology, and unit upgrade functions can be handled with the game’s radial menus. With no units selected, the ZR radial menu will bring up the command menu, which contains all the functions needed to recruit units, upgrade technologies, and manage your remote villages. The best feature here is that you don’t need to be at your base to manage your base. Just pop open the command menu and execute the desired commands – no need to go back and forth between your home base and your roaming armies, everything is right at your fingertips with Ancestors Legacy.

While having units selected, the same ZR command menu is used to activate special unit abilities, create traps, retreat, and set up healing camps. Ancestors Legacy adds to this by making both the L and R + A, B, X, Y, buttons function as hotkeys for the most necessary unit functions. Most of the time, you don’t even need to open up the radial menu. There’s a total of 6 different functions tied to these L and R hotkeys. 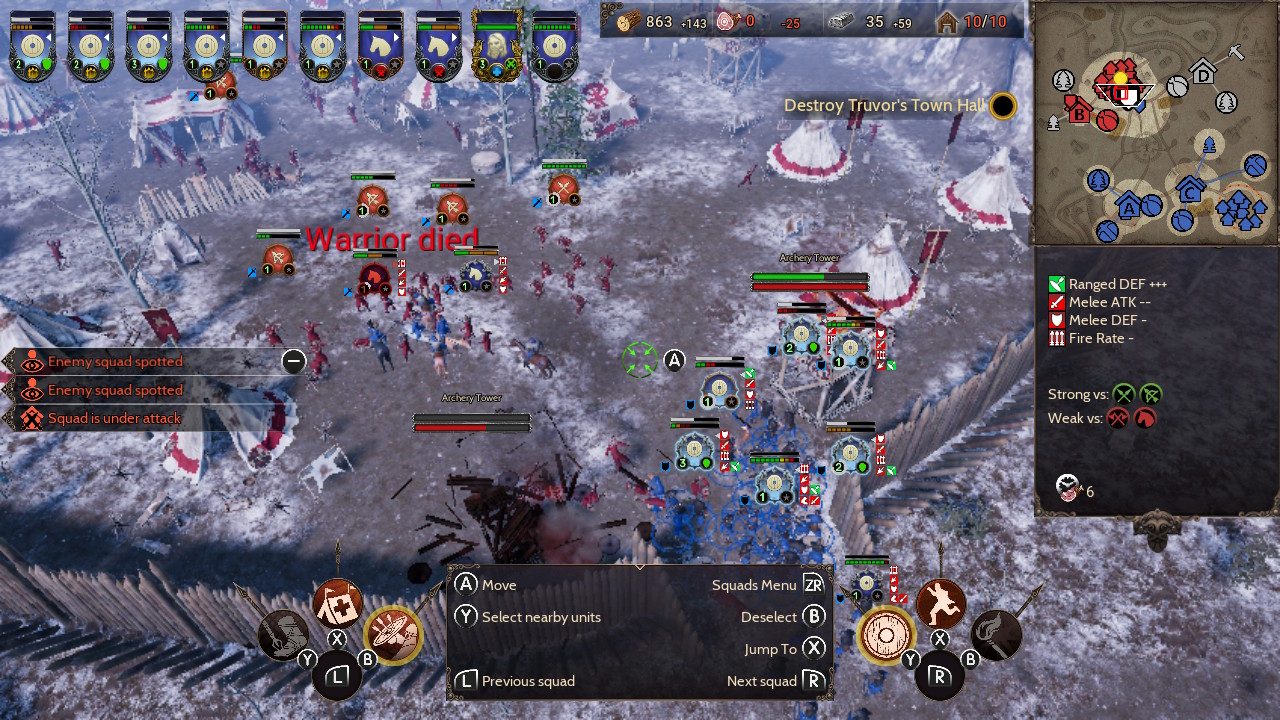 But wait, there’s more! RTS games that don’t let me hotkey specific groups of units drive me absolutely insane. Thankfully, Ancestors Legacy lets you do just that. By selecting a group of units and holding one of the D-pad directions, you create a hotkey for that unit group. The downside? You can only create four of them, as there are only four directions. After making it through the tutorial, I suggest hitting the options menu and taking a look at the entire control scheme. Somehow, Destructive Creations were able to cram what feels like an entire keyboard worth of controls into the Switch controller — I have walked away from this experience with a new, personal standard for in-depth controls. 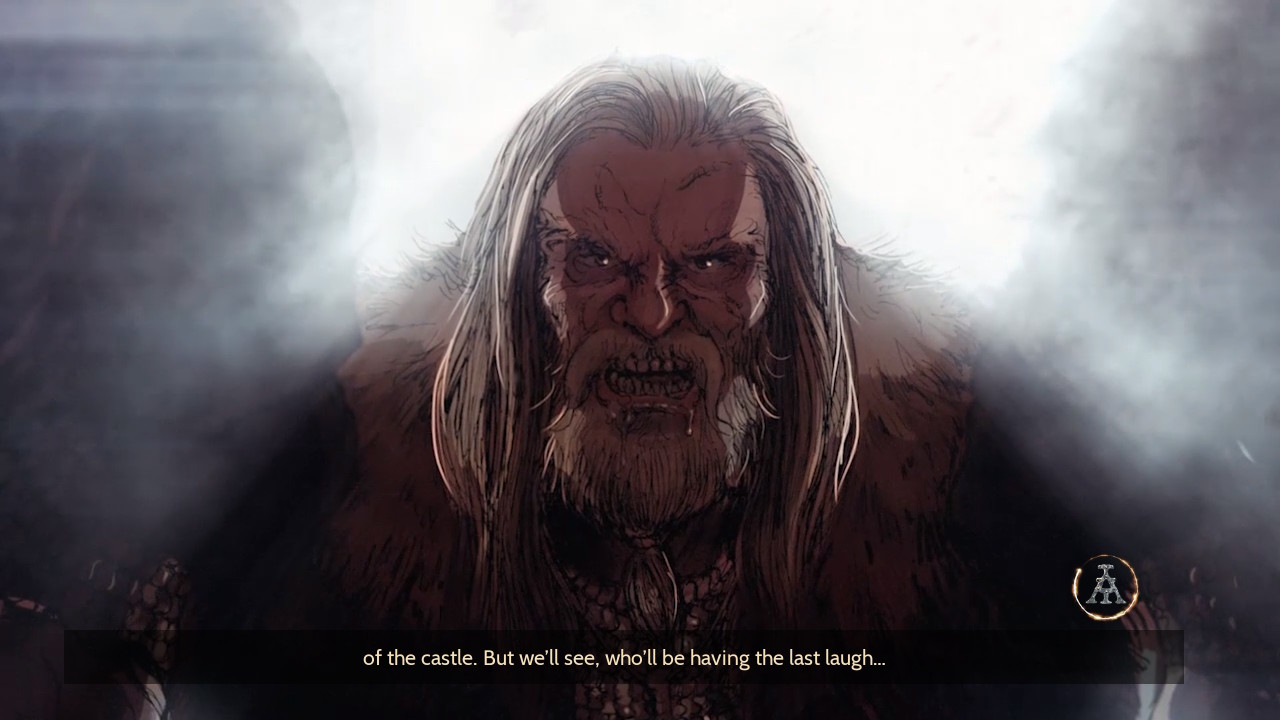 Ancestors Legacy kicks off each scenario with a short, animated cutscene which sets both the story and purpose for the upcoming objectives. Considering there are four playable nations, with each having two different sides to play, there should be more than enough narrative elements to satisfy all those story lovers out there.

The game takes place during the middle ages, and the highest tech weaponry you’ll find here is a catapult. This era sets the stage for some brutal, “mature audience only,” barbarian yelling, Braveheart-esque head-chopping war. The setting is brutally grim, so it’s only expected for it to be full of many audible grunts, screaming, and sword clashing. After playing the same scenario for an hour or more, the sound effects do tend to wear a bit thin. I often found myself turning them down a bit, just so the whole house didn’t have to hear my axemen’s war cries for the 500th time. That said, it matches the theme and overall aesthetic for Ancestors Legacy quite well. 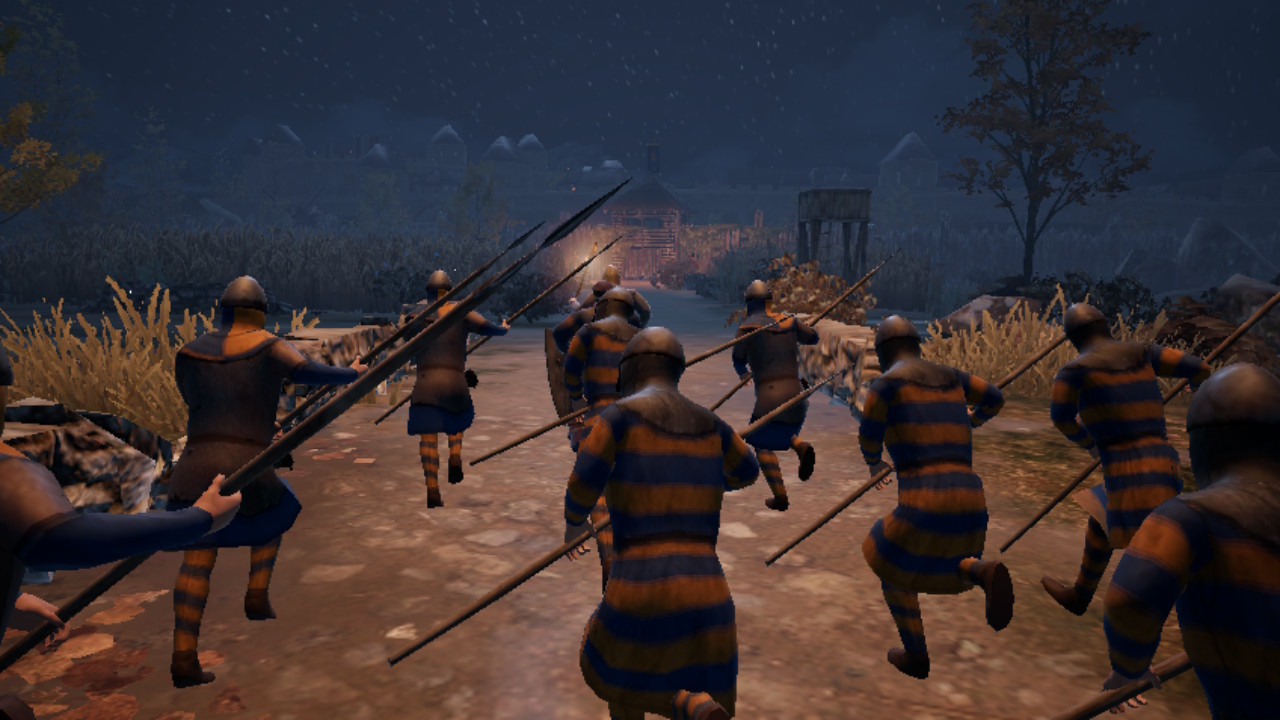 Ancestors Legacy doesn’t fare the best when it comes to visuals, and the user interface may be a bit too small for some. The graphics aren’t a complete eyesore, but certainly aren’t anything beyond being serviceable. All of the important parts of the user interface – unit icons, special abilities, building icons, and objective markers – are easy to gauge; not once was I confused at “what was what” due to inferior size/fidelity. The game’s eShop page touted a cinematic battle camera, but I feel that the feature was nothing more than a feeble attempt to include something totally unnecessary. It is neat the first few times you use it, sure, but the facade quickly fades.

On the technical front, I really only had one major gripe with Ancestors Legacy. On certain missions, keeping the camera anywhere near your base was a framerate disaster, as the game would slow to a nearly unplayable crawl. Luckily, the aforementioned remote building/recruiting from the menu circumvents the issue well. Remote management shouldn’t be mandatory, however, so a fix would be ideal here. While my time with Ancestors Legacy was an enjoyable one, it was also one that felt like a whole lot of work. RTS games aren’t for everyone, but this game, thankfully, wowed my socks off and put the genre back on my watchlist. Making armies and telling everyone what to do isn’t necessarily easy!

After giving the extensive control scheme a little time to sink in, I was able to effectively manage the entire battlefield with only a few button clicks. Taking time to set up the perfect army to coordinate ambushes and base raids made all the build-up time quite worth it. Most of the scenarios in Ancestors Legacy aren’t solved quickly – you may find yourself battling it out for more than an hour or two depending on your skill and knowledge. If you stick with it, though, I’m sure that you can find enjoyment in this fairly deep RTS experience on the Nintendo Switch.