Alder’s Blood puts a genuinely dark and terrifying spin on the tried and true “God is an all-powerful being” concept, giving off a vibe that is neither warm nor kind- and it’s all the better for it. I really like to see developers go out on a limb and try something that feels entirely new, even if it doesn’t give you a warm, fuzzy feeling while playing it. Brace yourself, the world of Alder’s Blood is not for the faint of heart- nor is the game, for that matter. 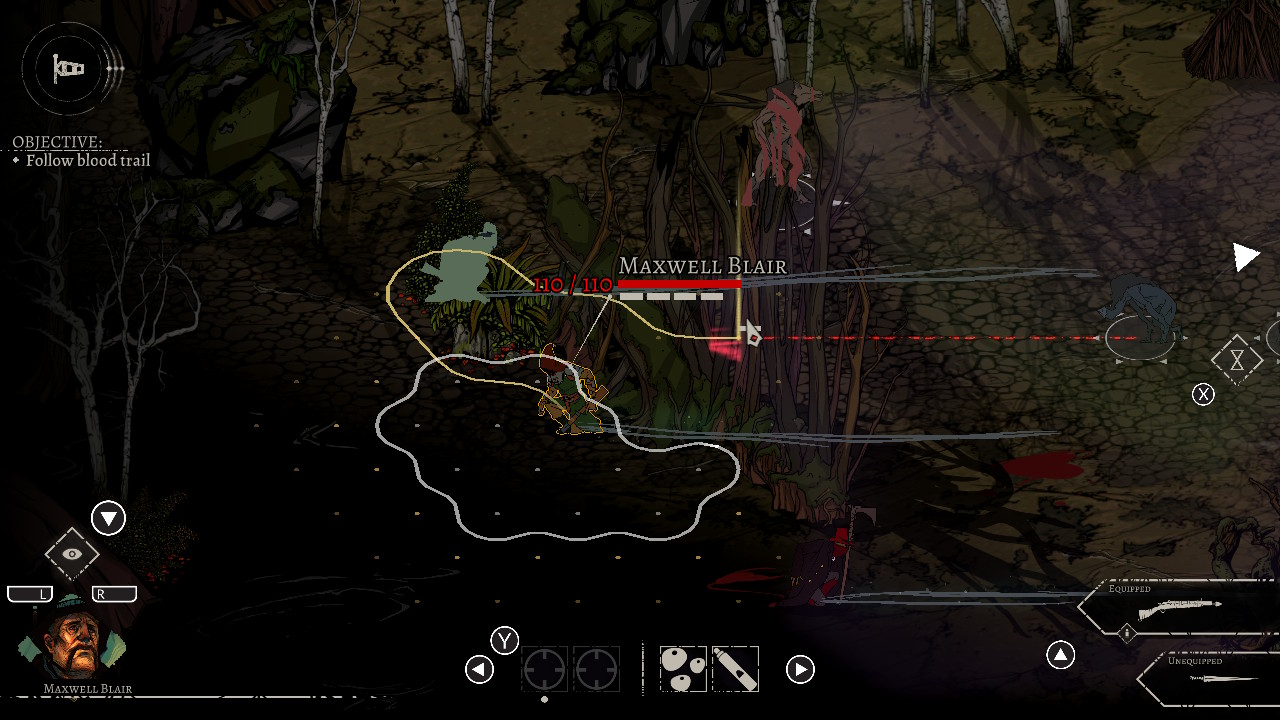 I’m absolutely on board with everything about Alder’s Blood’s visuals and graphics. Gritty darkness is found within every element of the game, including the cut scenes, dialogue, menus, and playable landscapes. ShockWork Games has done some really ingenious game design and coding in the way the display of the cursor adjusts when moving in and out of cover. It’s a little detail, but it does really make a big impact on how you interact with the game. It all results in a delicious display of gritty visuals that compliment the overall tone and storyline, even when it’s dark, brooding, and maybe even a bit depressing. 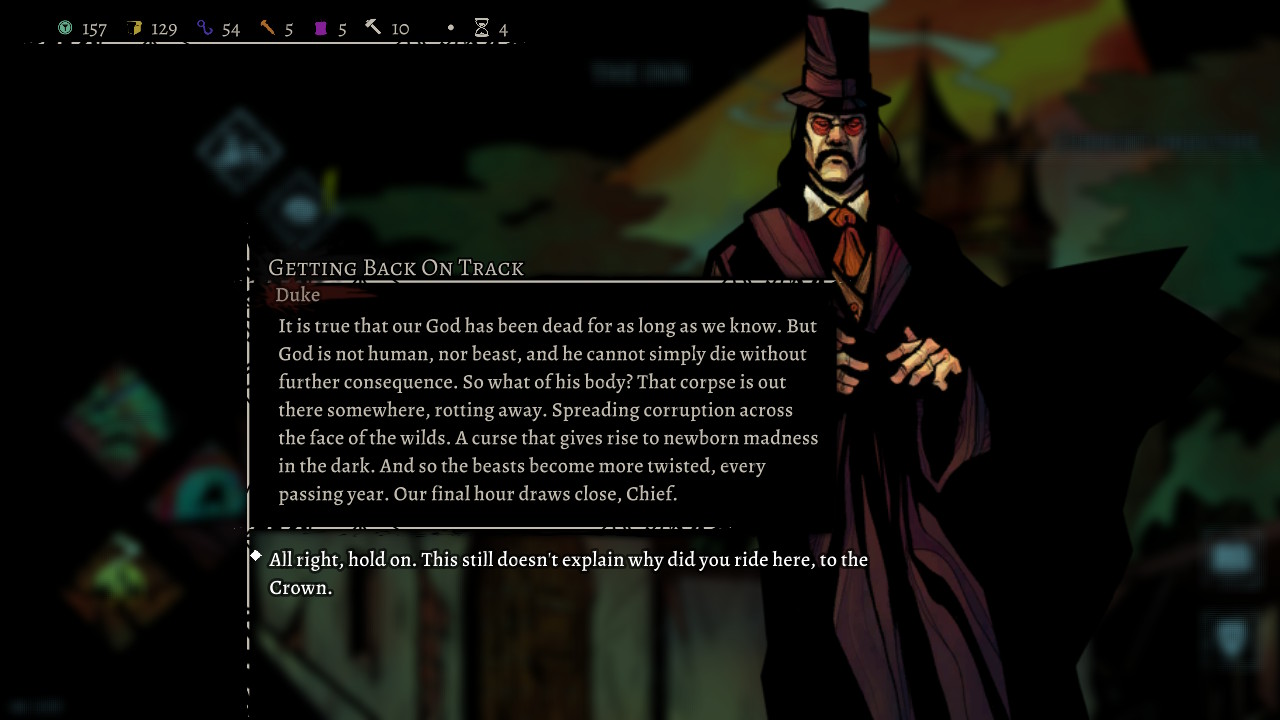 Alder’s Blood takes place in a world where man has slain God, but the result is a landscape now overrun with demons. Right from the start, you are burdened with feelings of hopelessness and desperation. As you play and progress through the story, you’ll soon learn that these demons are not born from the world, but from God himself. Yes, the now-dead God spawns demons out of his corpse. The story is magnificent and deserves to be explored, leaving many interesting questions unanswered at first and slowly trickling out the lore and background for the entire world. From a story perspective, Alder’s Blood has a truly compelling story to tell. 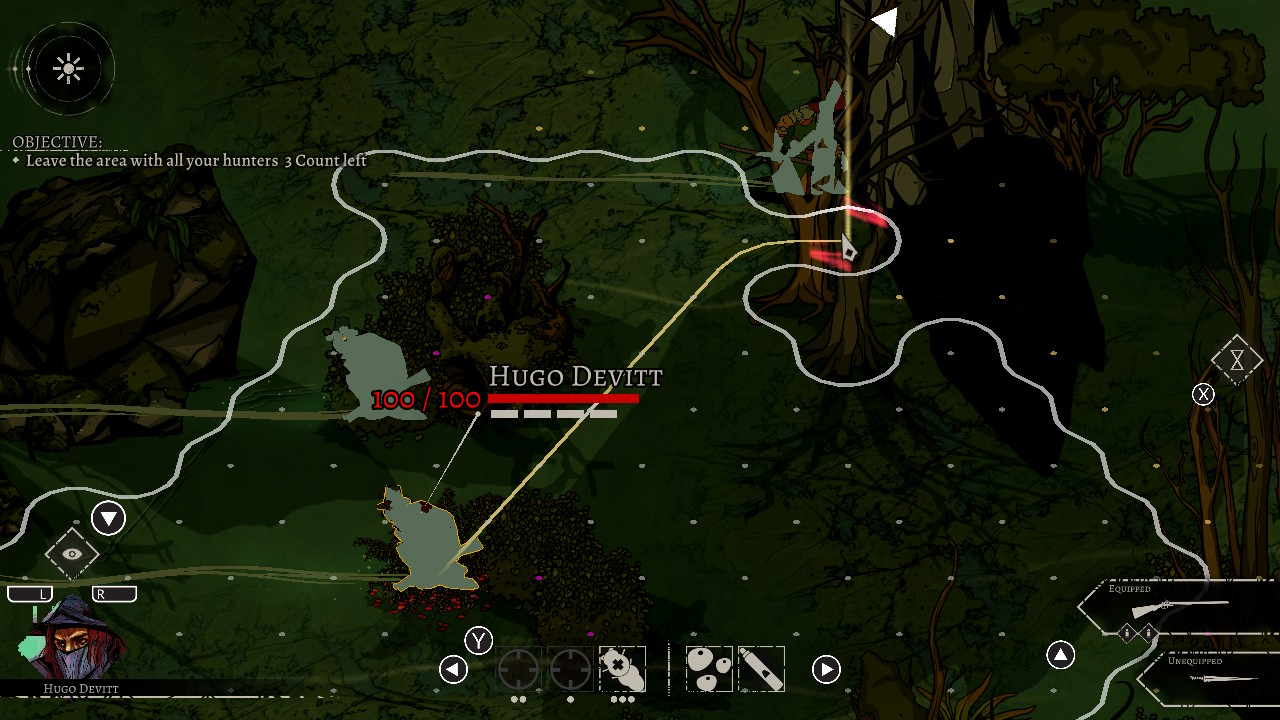 The majority of Alder’s Blood’s gameplay will have you navigating dark and grimy landscapes and cities with a heavy focus on stealthy, turn-based movement and combat. While shooting the bad guys with the big guns is often first task in many other games, Alder’s Blood does it quite a bit differently. The focus on stealthy gameplay forces you to think outside the aggressive strategy, and instead has you throwing rocks for distractions and netting ghastly enemies as you run away.

During my first playthrough attempt, I was convinced in my mission to make all demons perish, but Alder’s Blood was already one step ahead of me. The game tracks each hunter’s corruption level, which is how close to going absolutely crazy each of them are. Hunters gain corruption simply by participating in levels and performing aggressive actions such as attacking, using magic, and banishing demons. You can play with an aggressive playstyle if you want, but the game (and I) wouldn’t advise it. I soon found myself on the road with all of my hunters hysterically running into the wilderness, yelling nonsensical words while harming themselves. 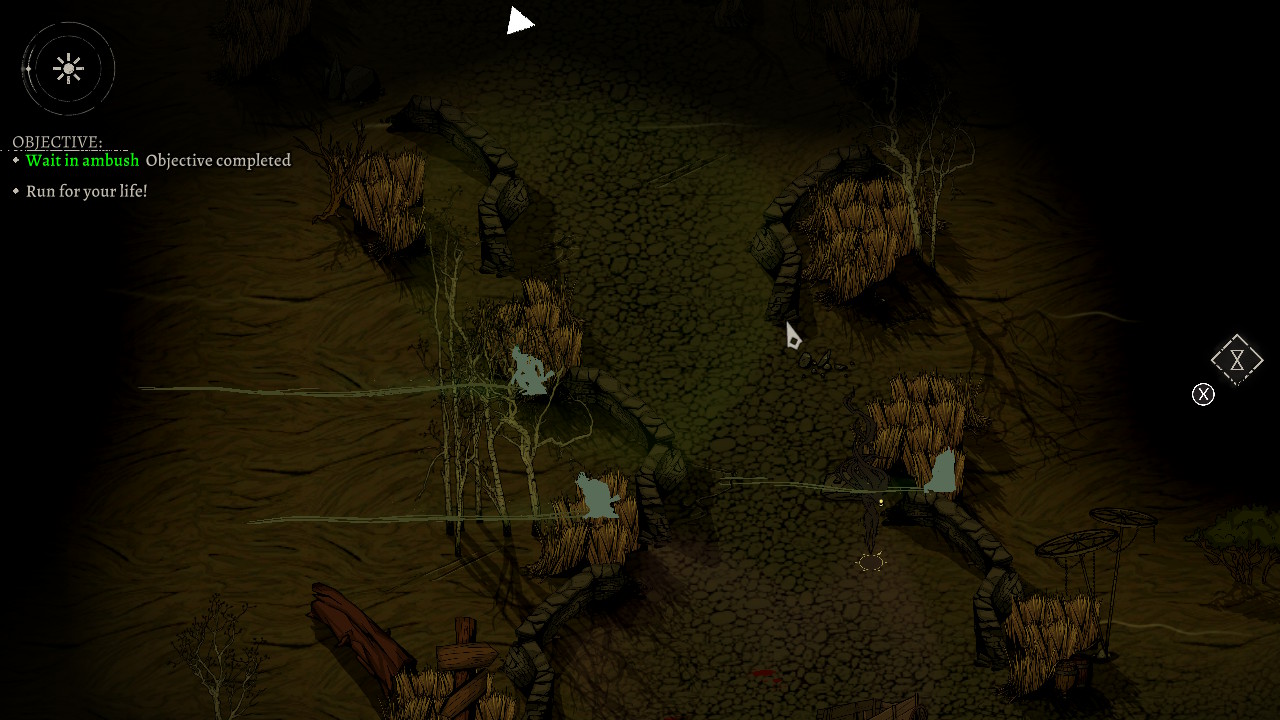 Alder’s Blood also brings a new mechanic to the battlefields: smells. Yes, your hunters really stink, and the demons can sniff you out from afar if the wind direction is just right. Unfortunately, randomness plays into this mechanic a little more than I would like. The wind in Alder’s Blood has to be the most unpredictable beast in all of the lands, whipping from North to South, to East to West, and back again, all within one mission. Meteorology is dead, long live Alder’s Blood!

The game also has a variety of weapons you can choose from. Everything from ranged weapons to close combat melee swords and shivs can be utilized to take down the hordes of demons. With the heavy focus on stealth mechanics, it’s advisable that you don’t use all your swords and bullets immediately and make sure they are stocked up for when the smells hit the fan. You’ll have to plan your actions carefully, as each attack or movement requires a set amount of stamina. Run out of stamina and your hunter will be stunned for a turn due to overexertion. 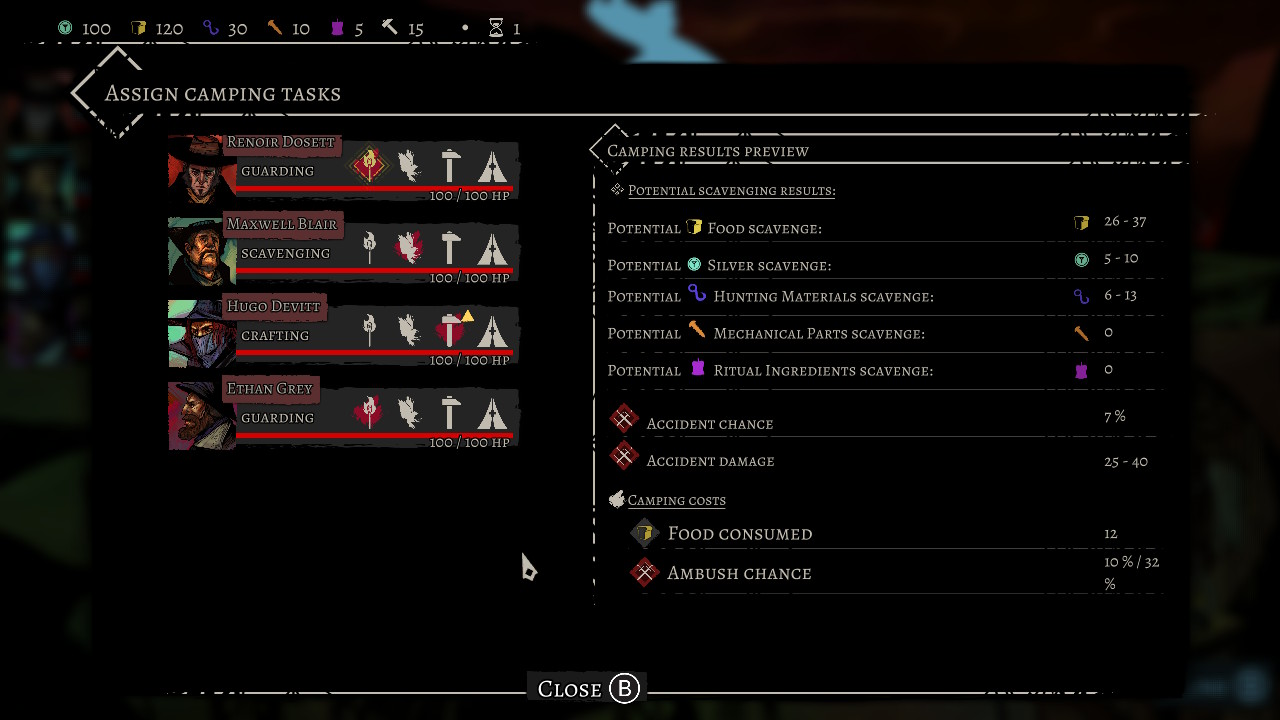 Alders Blood’s gameplay is more than just turn-based tactical movement on a grid. It also comes stocked with a bunch of game functions wrapped around a campfire. At the campsite, you can scavenge for materials, heal wounded hunters, craft new items, and pass the time. The world outside is dire and unforgiving, why should camping be any different?

When choosing to do any of the camping activities, you are given the ability to assign hunters to various different roles. For instance, you can have one hunter scavenge, one heal, and maybe two hunters guard the camp. The statistics and possibilities for all these activities are clearly displayed on the assignment screen. Performing any of these camping activities comes with a certain percentage that accidents or ambushes may occur. Your hunters need an ample supply of food to remain living and travel across the map. Certain areas of the map are more dangerous for the camping caravan than others, so you’ll need to plan accordingly. Each turn will consume food, making your choices at the campsite even more important. 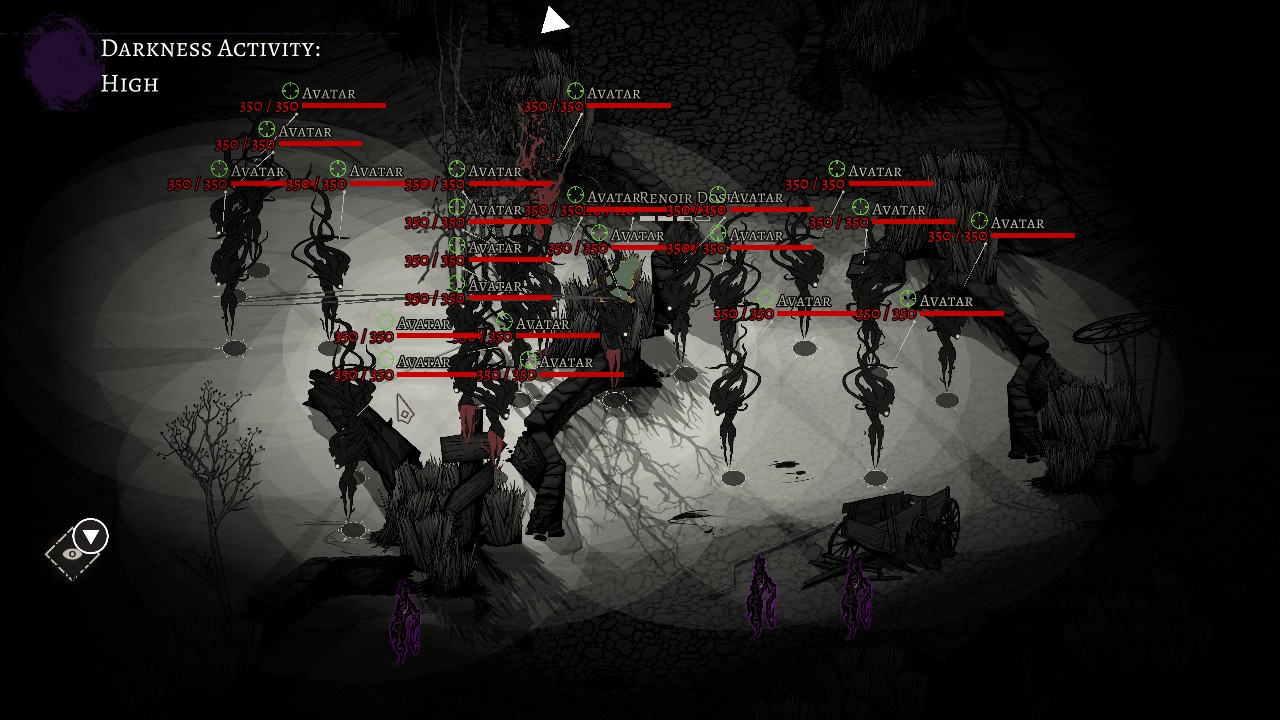 Alder’s Blood has the potential to be great, but currently sits upon some rocky ground. I can’t speak for the other console or PC versions, but the Nintendo Switch version of the game has some concerning issues. At times these seem to be fairly simple problems, and other times they are larger, “stop you from playing in your tracks” types of issues.

Throughout my time with Alder’s Blood, I ran across numerous roadblocks, either because I felt like the level was designed unfairly or I wasn’t good enough. It’s anyone’s guess, but for the sake of fairness, I’ll err on the side of me sucking more often than not. Except that’s not the case every time. A common theme found throughout Alders Blood is randomness. After failing a level and restarting numerous times, I found the randomness to be… maybe a bit too random. We’re all fans of games that give us a fresh new experience every run, but sometimes, things just don’t feel right. I can’t pinpoint it, but Alder’s Blood starts to not feel quite right after a few mission failures.

In a game where one wrong move can swiftly turn a successful mission into a failure, there lies little admiration for random failures. I’m a firm believer that games need to have a very clear and well-defined explanation for telling the player how they have failed. I deserve to fail for actions I made, not for some random, hare-brained movement scheme programmed into the enemy AI. If you spend enough time with Alder’s Blood, I’m sure you will get to experience this at least once.

We could stop there, but there’s a bit more down the deep, dark path. My time with Alder’s Blood was riddled with really weird and odd visual abnormalities, not to mention the entire save game system faltering. I’m on my third playthrough attempt, with little hope that I’ll be able to continue straight on to the end without additional patching and support from ShockWork Games.

It must be noted that one patch for the Nintendo Switch version has already been released. I have no doubt developers are actively working on fixing these issues, as they are identified and reported over on their Discord server. I’m only here to elaborate and reflect on my play experience.

Being a Nintendo Switch title, the default physical controls for Alder’s Blood are mapped to the frustrating Joy Con layout. This does the game absolutely no favors, making precision dot-movement within the turn-based combat segments highly irritating. I could totally see the developers foregoing the existing free stick movement and opting for a scheme that snaps to each space. 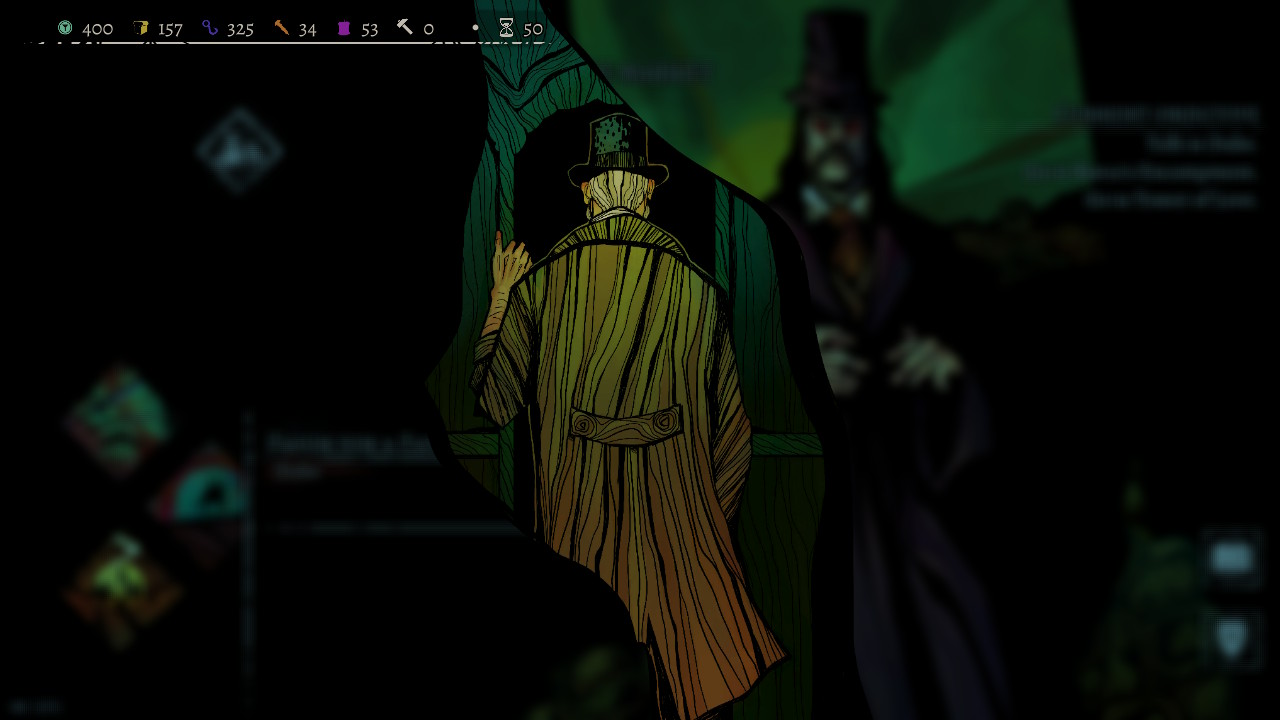 Alder’s Blood looks and feels like a really solid game, but once you embark on your adventure the paint begins to chip and the cracks begin to show. It’s another scenario in which a title needs just a little more love before it’s ready for its glowing debut. The Nintendo Switch game market is highly competitive, and there’s little room for games that outright stop the player from progressing or force them to put their controller down. I’ll continue to play Alder’s Blood and do my part to assist ShockWork Games in identifying and remedying these issues, because I really think they are onto a great product, here. Alder’s Blood has a terrific story that begs to be discovered, a fairly solid turn-based system that’s actually fun to play, and an extensive crafting and inventory system. Also, who doesn’t like slaying demons?!