My adoration for the roguelike has been a rollercoaster of a ride that spans decades. Growing up, I enjoyed the likes of Toejam & Earl and Castle of the Winds before I even understood what the genre was, and have managed to put many hours into more recent entries – like DragonFangZ and Moonlighter – as well. While I don’t have the iron stomach required to take on many of the more famously brutal roguelikes out there, the found – and proud – with heavy RPG influences have quickly become my go-to time-killers on the Switch. Alchemic Dungeons DX is the latest in my roguelike venture, and it lines up really well with what I’ve grown fond of in the genre although it is clear – in a couple ways – why the game is accompanied by the fairly low price of entry.

There isn’t one. Moving right along…

Really, the story is nonexistent in Alchemic Dungeons DX, and it isn’t one of those situations where it is just on “light” side either. But since you are here, you might be interested to know that the game started out as a (gasp) mobile endeavor before jumping on the 3DS train back in 2017. The Switch and new Steam versions, denoted by the DX tag, feature additional playable characters, new items, dungeons, enemies, and more. It is the definitive version, if you will. Now, on to greener pastures. 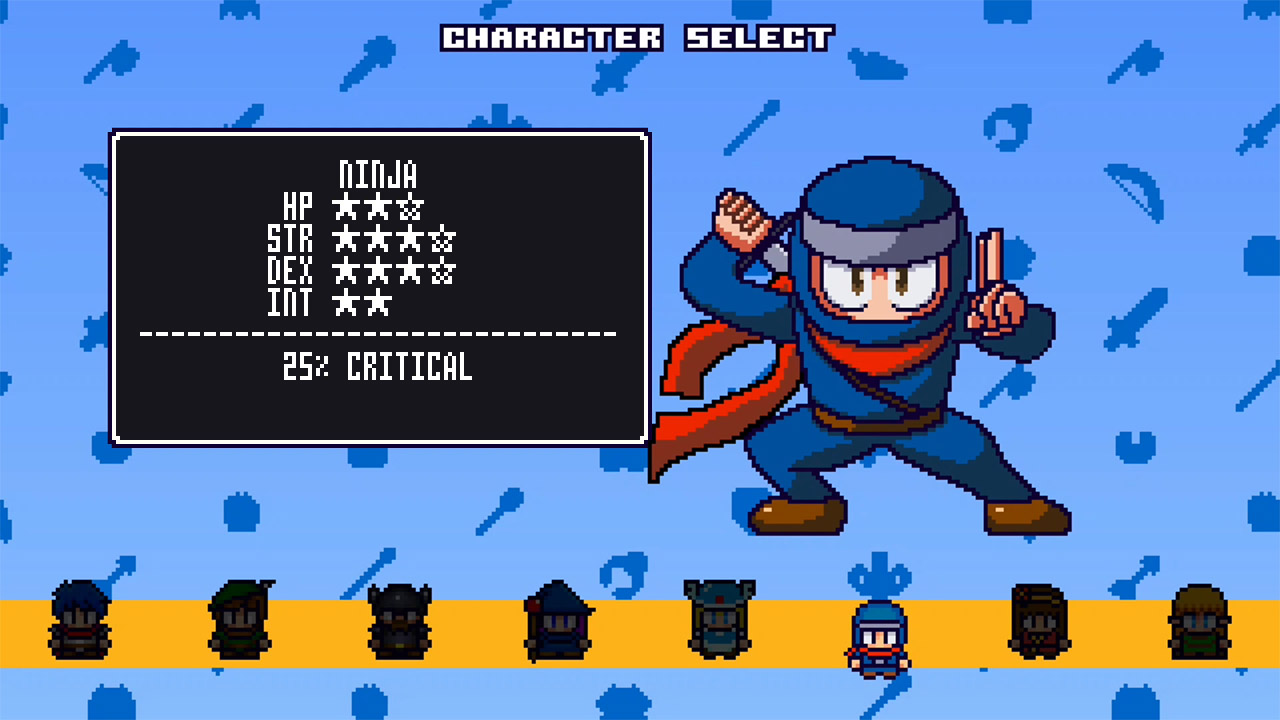 Alchemic Dungeons DX is part turn-based dungeon crawler – complete with standard roguelike goodness – part survival, and part crafter, with the latter comprising the majority of your adventuring time (for better and worse – more on that later). You begin by selecting from one of eight characters (or classes), consisting of the Fighter, Hunter, Dwarf, Witch, Valkyrie, Ninja, Kunoichi, and Elf. Gear in Alchemic Dungeons DX is not character-specific, meaning that you could technically deck out your spellcaster in the heaviest of armor. However, each character’s stats are weighed differently, thus are catered more towards certain weapons and armor.

Additionally, all characters come with a singular, passive trait that further differentiates similar classes from each other. The battle-hardened Fighter and Dwarf are similar, sure, but one has a passive that increases health regeneration while the other provides a % increase to damage. The Valkyrie and Ninja are melee-centric too, but utilize %+ evasion and %+ critical hit traits respectively. These bonuses and variations to stat weights, while simple in concept, create incentives to try out different characters if you find yourself hitting the wall, or simply want a change of scenery.

Once a character is selected, you must complete a short tutorial dungeon that will fill you in on the basics before the game really begins to open up. Here, you will learn that every action you take, including movement and crafting, will count as a single turn. Once you take a turn, all active enemies will have the opportunity to act also. There is no timer you have to worry about either, so you can – and should – fully explore maps as your character’s health permits. Health is regenerated naturally over time, but can also be replenished through craftable consumables.

Speaking of, Alchemic Dungeons DX invests heavily into a fairly deep crafting system. Materials can be found in dungeons through harvesting nodes – trees, mineral veins, and brush – and off the corpses of your enemies. There are at least 100 craftable items of various qualities at your disposal, which can be crafted at any time given you have the proper ingredients first. Most gear can be enchanted also, empowering the pieces with various bonuses. And don’t worry about having to use an outside source to keep all the recipes straight, Alchemic Dungeons DX keeps a handy recipe compendium for you that outlines all crafting possibilities. 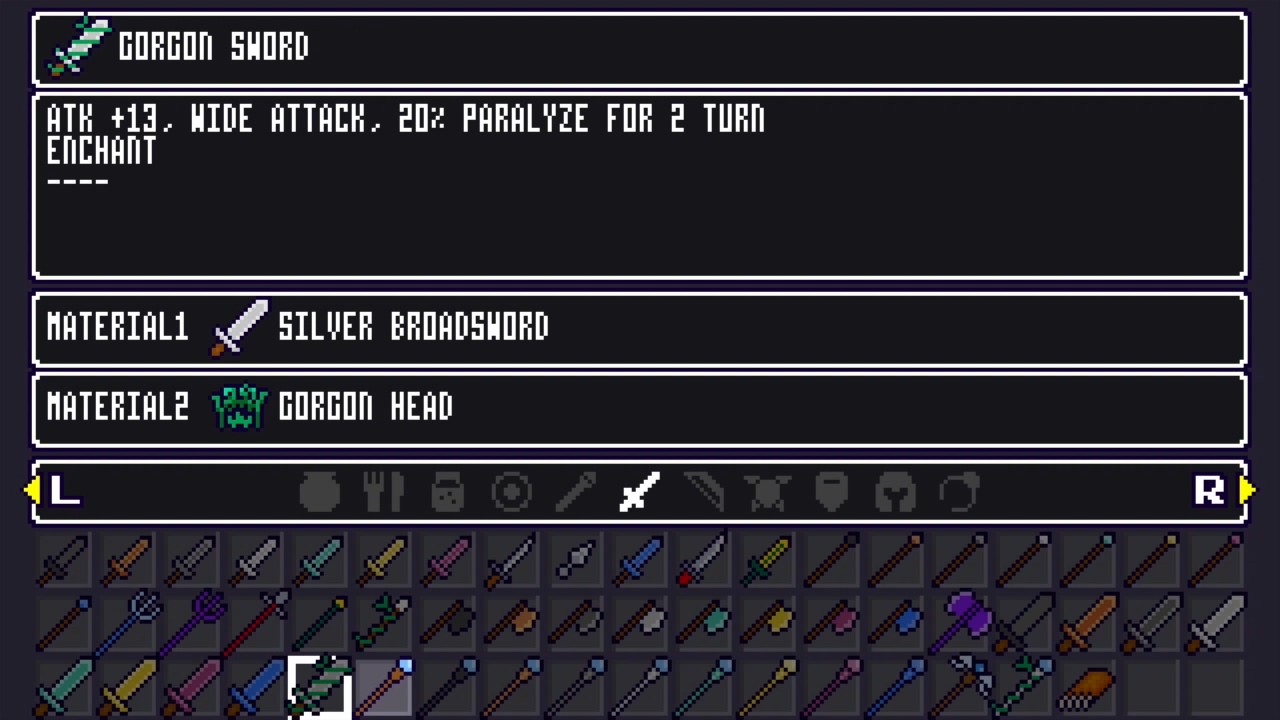 If you don’t like crafting in games, you will not like this game at all as it is a mandatory tool for progression. Whereas you might rely heavily on monster drops and chests for gear/consumables in other roguelikes, Alchemic Dungeons DX instead puts that concept inside the crafting system. Because you will be crafting a lot, it won’t take long for you to notice that you can only manufacture one type of item at a time before it closes out the menu and puts you back into the action.

While I get why this was done, seeing as each action (even crafting) counts as one turn, it does become a bit tedious when you need to craft lots of things at once and have to jump through a bunch of menus constantly. Fortunately, the more you play, the more menu navigation becomes second nature – even so, it isn’t an ideal system. The last piece of the gameplay puzzle is a very basic “survival” system that requires you to consume food every now and then to satiate the hunger meter. If the meter reaches zero, you will lose health with every action until you bring it above that threshold once again.

Making it to the end of a dungeon opens up more difficult ones to tackle, and usually upgrades your crafting possibilities as well. The level progression here might be the most annoying part for veterans of roguelikes though, because you have to play each dungeon in order. Want to test your mettle against the hardest dungeon right off the bat? Too bad. There are six procedurally generated dungeons that progressively become longer and more difficult to complete. But honestly, the first 4-5 of those will probably not be difficult enough for the average player, and there is no real incentive to play them again after the initial clear.

In my opinion, the game really starts at the final dungeon – Level 6 – where you will be intimately familiar with crafting and every other mechanic, but it really shouldn’t require so many “tutorial” dungeons in between. About the only positive thing to come from slogging through the earlier dungeons is being able to experiment with various crafts in a relatively stress-free environment, so at least there’s that. On the other hand, the difficulty curve here is catered quite well towards genre newcomers and casual players alike, though the final dungeon can still easily give you a run for its money if you aren’t careful. Alchemic Dungeons DX, though shy about difficulty in the beginning, is an enjoyable roguelike with heavy – albeit simple – RPG mechanics built right in to the experience. 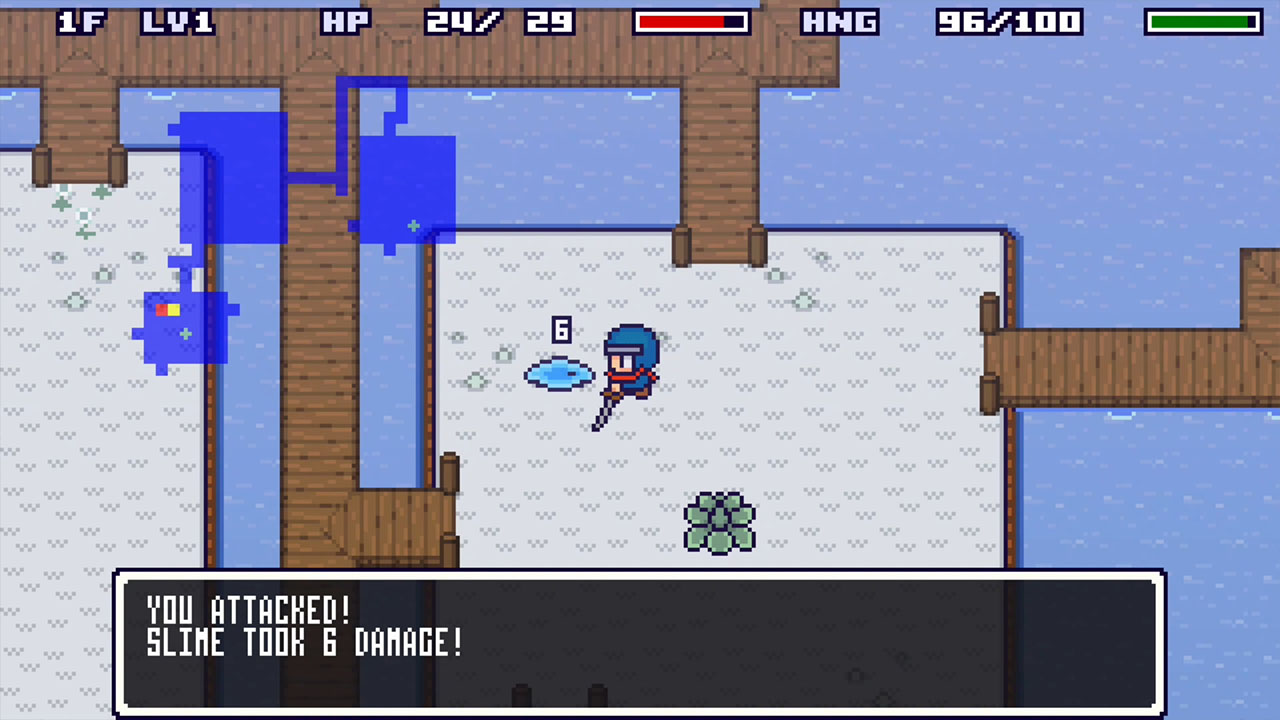 Roguelikes aren’t always known to be the most aesthetically pleasing games out there, and that definitely applies here. As a fan of the golden era pixel-based RPGs I can appreciate almost any nostalgic offering, but Alchemic Dungeons DX is just not that exciting from a visual perspective. Biomes occasionally change, yes, but the rooms themselves are drab and are often generated much larger than they really should be.

Outside of the characters, enemies, and harvesting nodes, there’s really nothing to look at or look forward to from a graphical standpoint whilst adventuring. Your character’s appearance doesn’t change when equipping new gear, and both characters and enemies are minimally animated across the board. Alchemic Dungeons DX fares a little better on the audio side, however. The chiptune soundtrack is apparently “enhanced” in the DX version, though I’m not sure what exactly changed from the original version. Sound effects are appropriate also, with sword strikes and magic spells registering with adequate precision.

There’s a lot to love about Alchemic Dungeons DX if you can look past some of its shortcomings. Roguelike veterans might be a little bored initially, but pushing through the lengthy “tutorial” dungeons will open up a reasonable level of challenge in the end. That said, it is the perfect gateway game for more casual players and newcomers to experience the genre without being immediately thrust into typical roguelike madness. It may not be the prettiest thing out there – okay it is DEFINITELY NOT pretty – but the mechanics are solid, making Alchemic Dungeons DX an enjoyable ride overall.

This game sounds like a lot of fun! Is it like Izuna: Legend of the Unemployed Ninja? I loved that game and I have yet to find a roguelike that was as satisfying as that game. It pushed you to try to make it to the end… but it was equally as fun to start over! Very delicate balance. Roguelikes tend to either throw in too much crap (insane amounts of stats and drops) or too little crap. Too much stuff makes it increasingly unpleasant to start over. Too little stuff gives no incentive to push forward to the end.… Read more »

Not familiar with that game, but I found this one to be very fun. Like I said though, it is quite easy for a roguelike, at least up until the last dungeon or two.

But… Toe Jam and Earl are a rogueLITE, not a rogueLIKE.